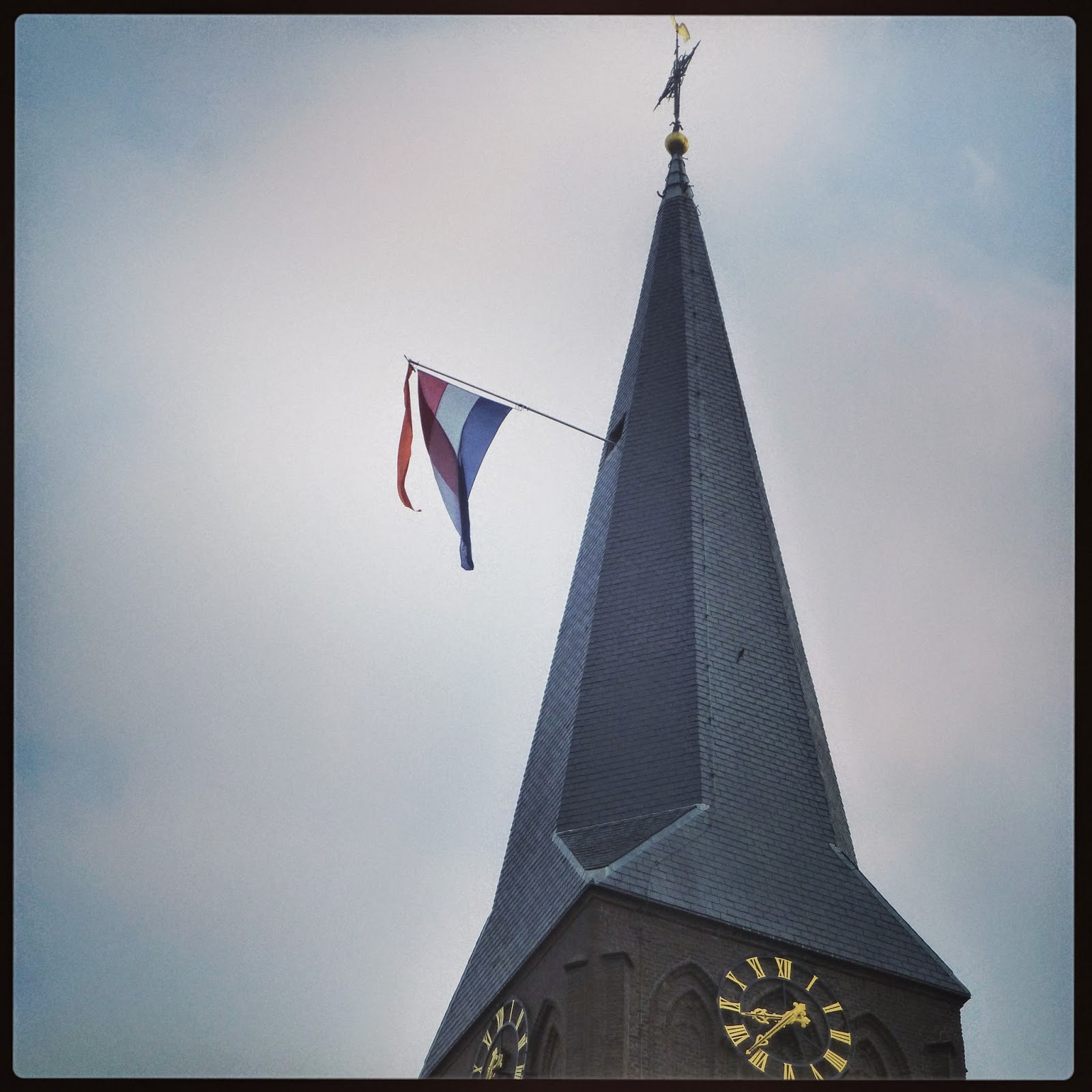 All my life, and my mom’s and my grandmothers life we had Queens Day in Holland. This was always on the 30th of April. But last year our Queen Beatrix gave the throne to her son, King Willem Alexander. So now we have Kings Day! We all make mistakes by saying Queens Day all the time but this year it is already the first official Kings Day. Our King’s birthday is the 27th of April. Because this year that’s a sunday we celebrate it on saturday the 26th. 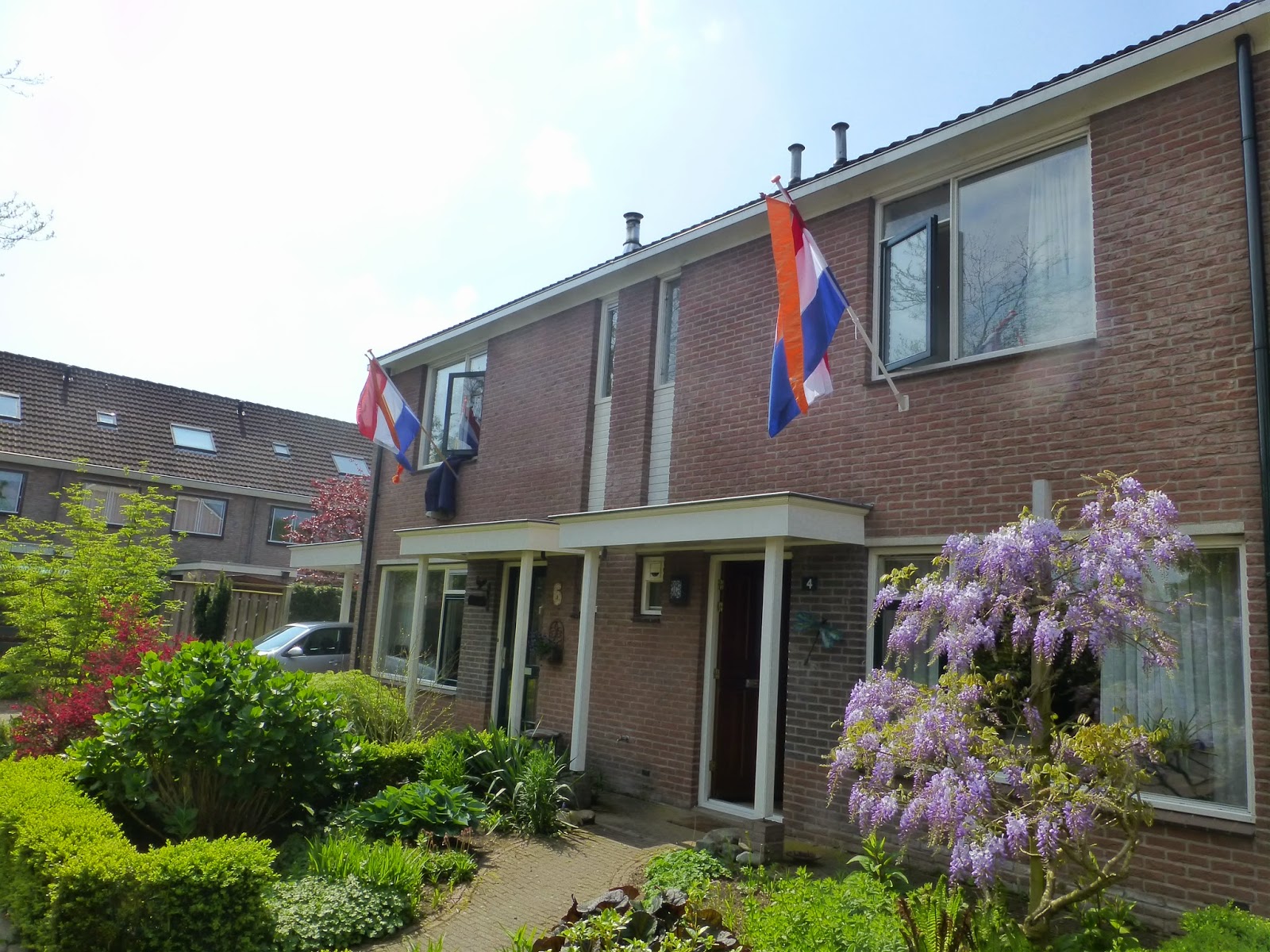 But today it’s Kings Day and we raise our flag. Because it is a festivity we also raise the orange pennant with the flag. Orange is the colour of our country, of our Royal House.

Early morning there will be music from the marching band in the village, sometimes they wake me up but this morning the route was different. I did see them walking by 🙂 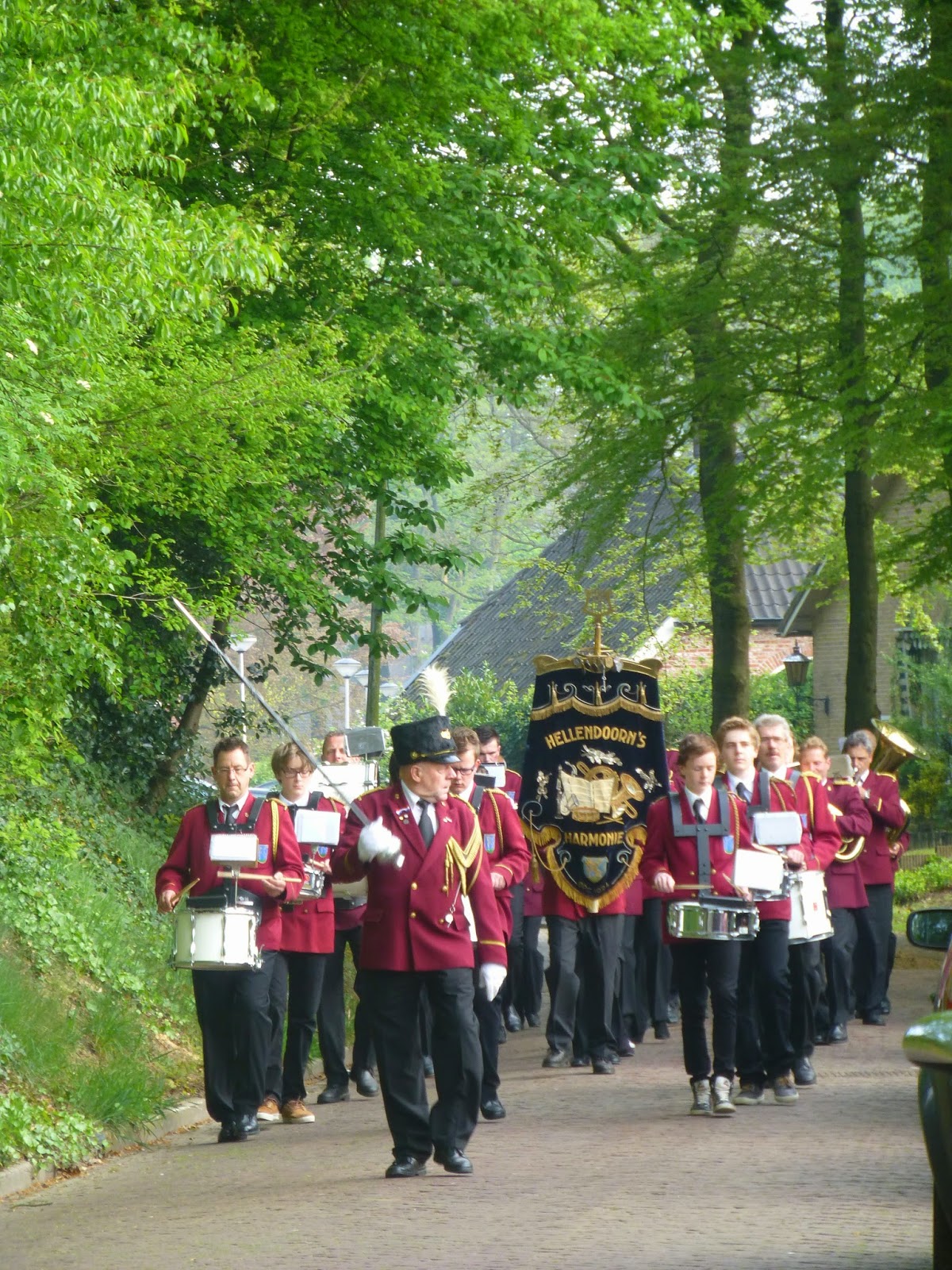 In the days before Kings Day some people will be honoured. Those are people who have done a lot for society in their lives. People who have done outstanding jobs and/or volunteering long time. Family or friends will write a proposal to the King for people from which they think must be honoured. Some of those people will get a medal on the days before Kings Day. Today, this morning, those people were honoured on stage and will wear their medal of honour. The title which goes with the medal can have different stages depending on your activities. Most of the given ones are called Order of Orange Nassau.
This year 3153 people got a decoration, 51 of them are on the Islands (Curacao/Aruba/St Maarten/Bonaire)
You can only wear the medal on days like this,  there  are strict rules about that. 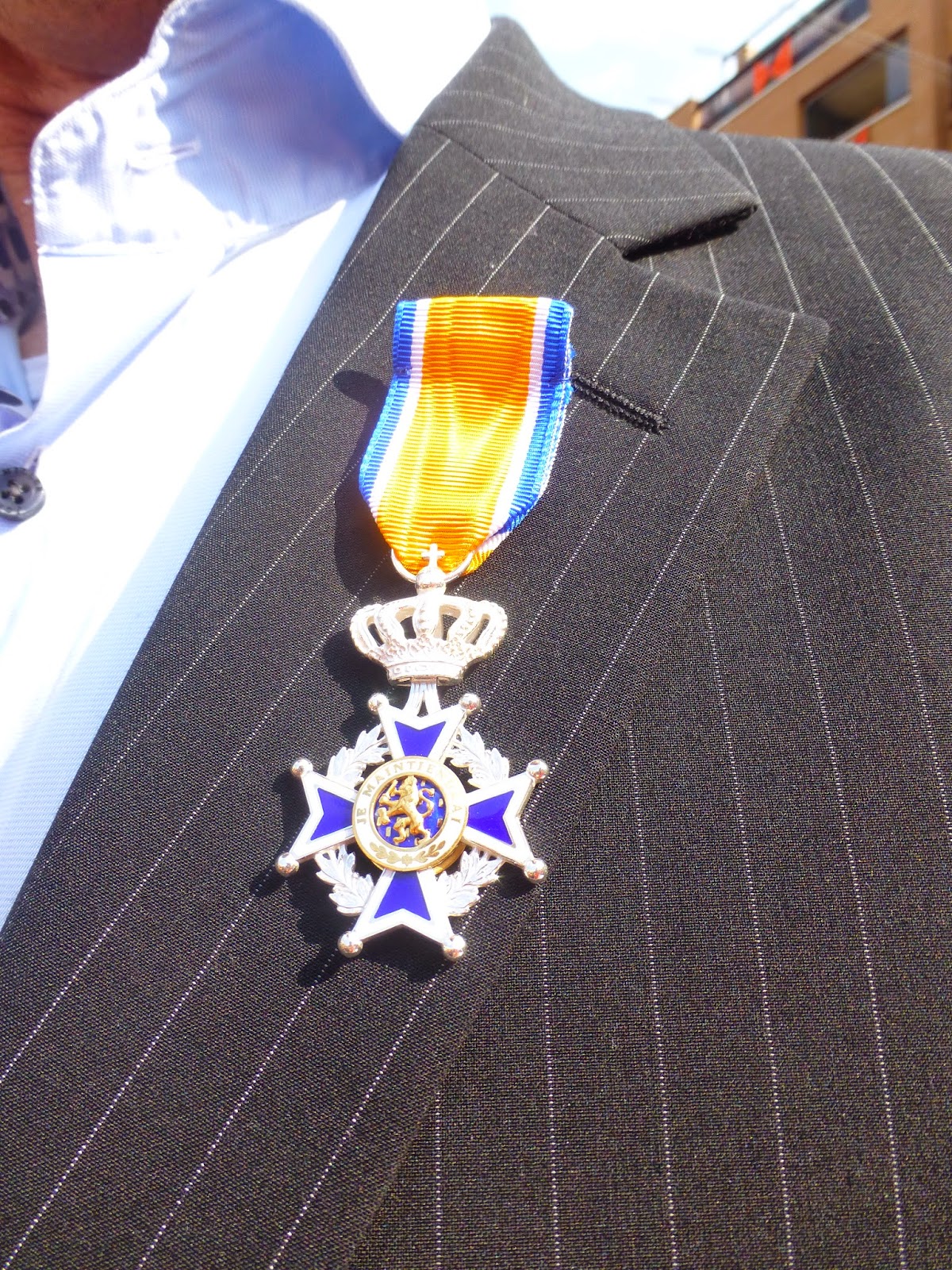 As always there are many markets where people sell there used items. In Hellendoorn we have a meadow in the middle of the village where the annual festivities are held. This morning the market was there, many people just sit there on a chair behind there goods. The selling goods will be layed on the ground on a blanket and people will walk by and hopefully buy something. 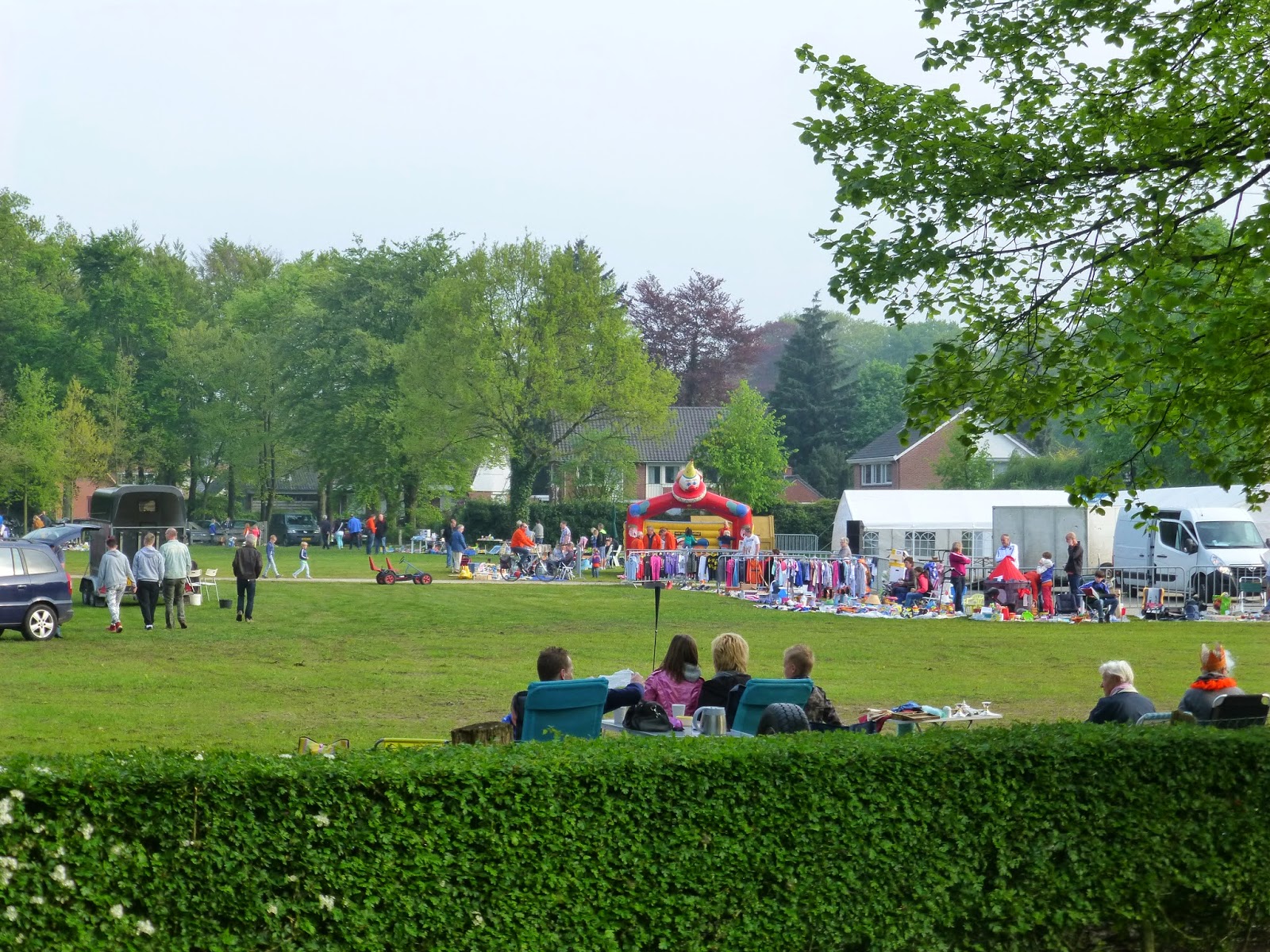 Hellendoorn is a small village so I always go to the next village because there is also a long market to go to. My sister did buy clothes for her sons, saves a lot of money! I did buy something too today, a holder for my telephone while running. A new one for just 2 euro!! 🙂 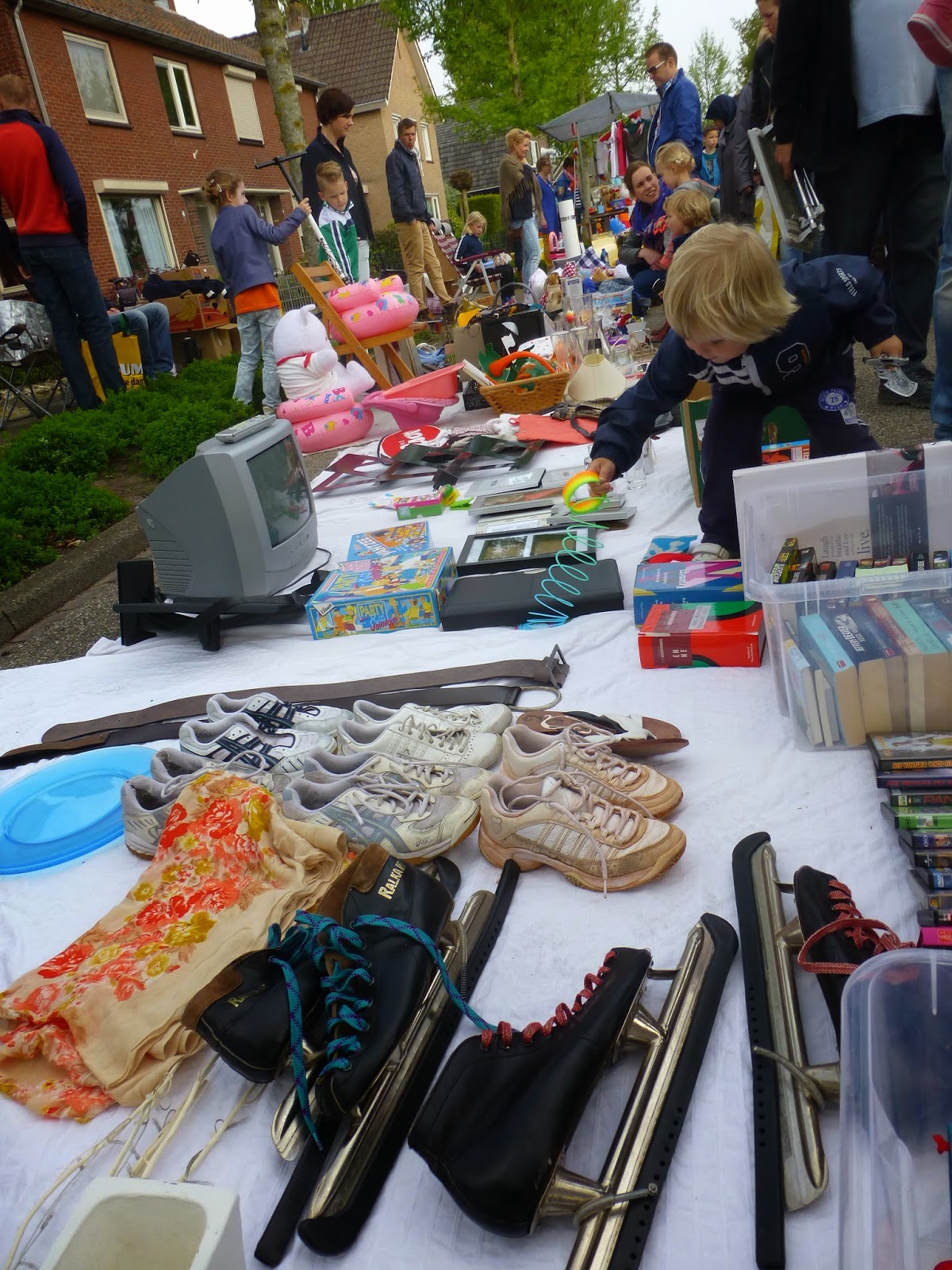 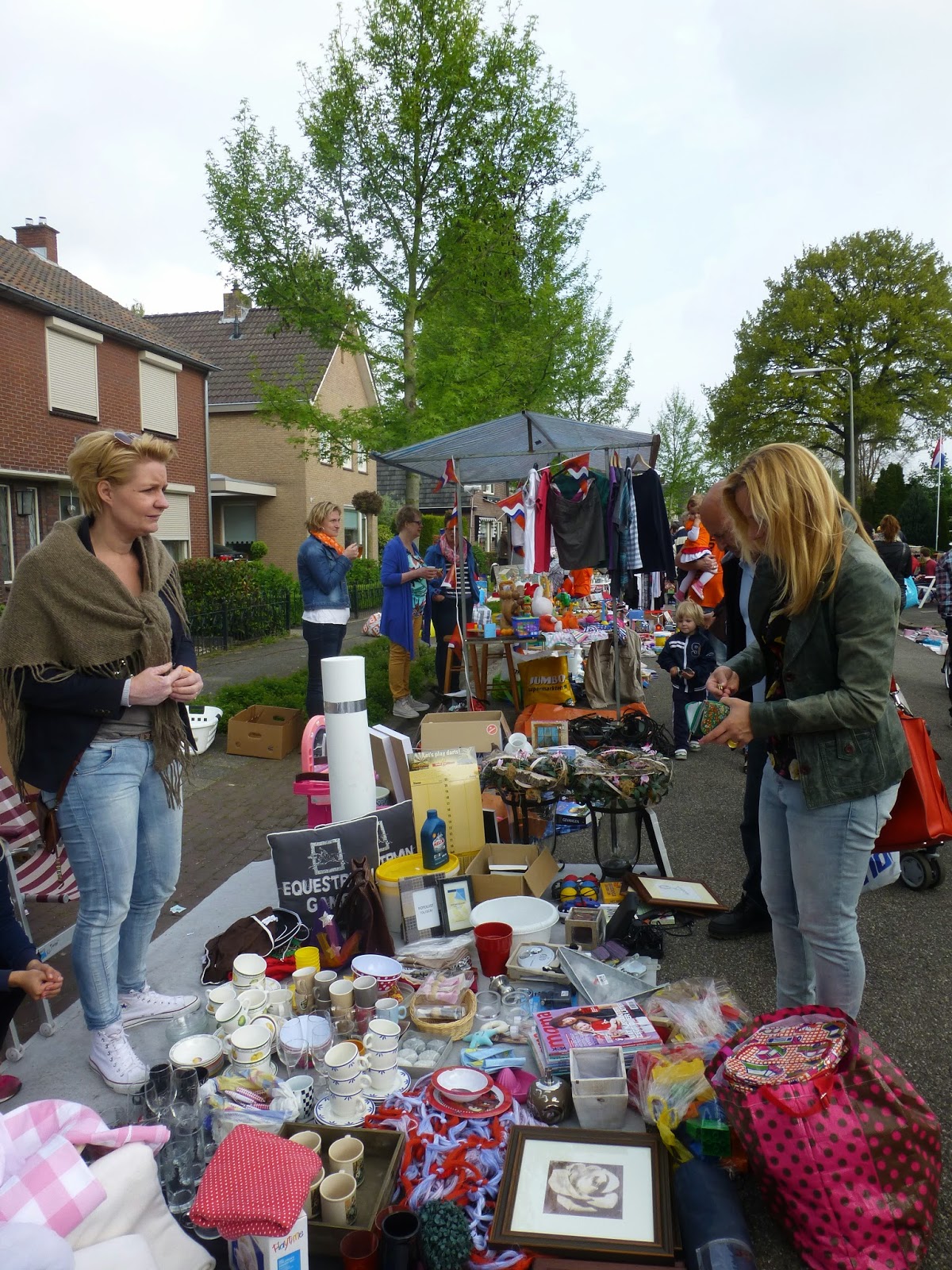 We bought some tickets for the lottery just to support the local society. The prices weren’t all that but yeah…it’s for a good cause. 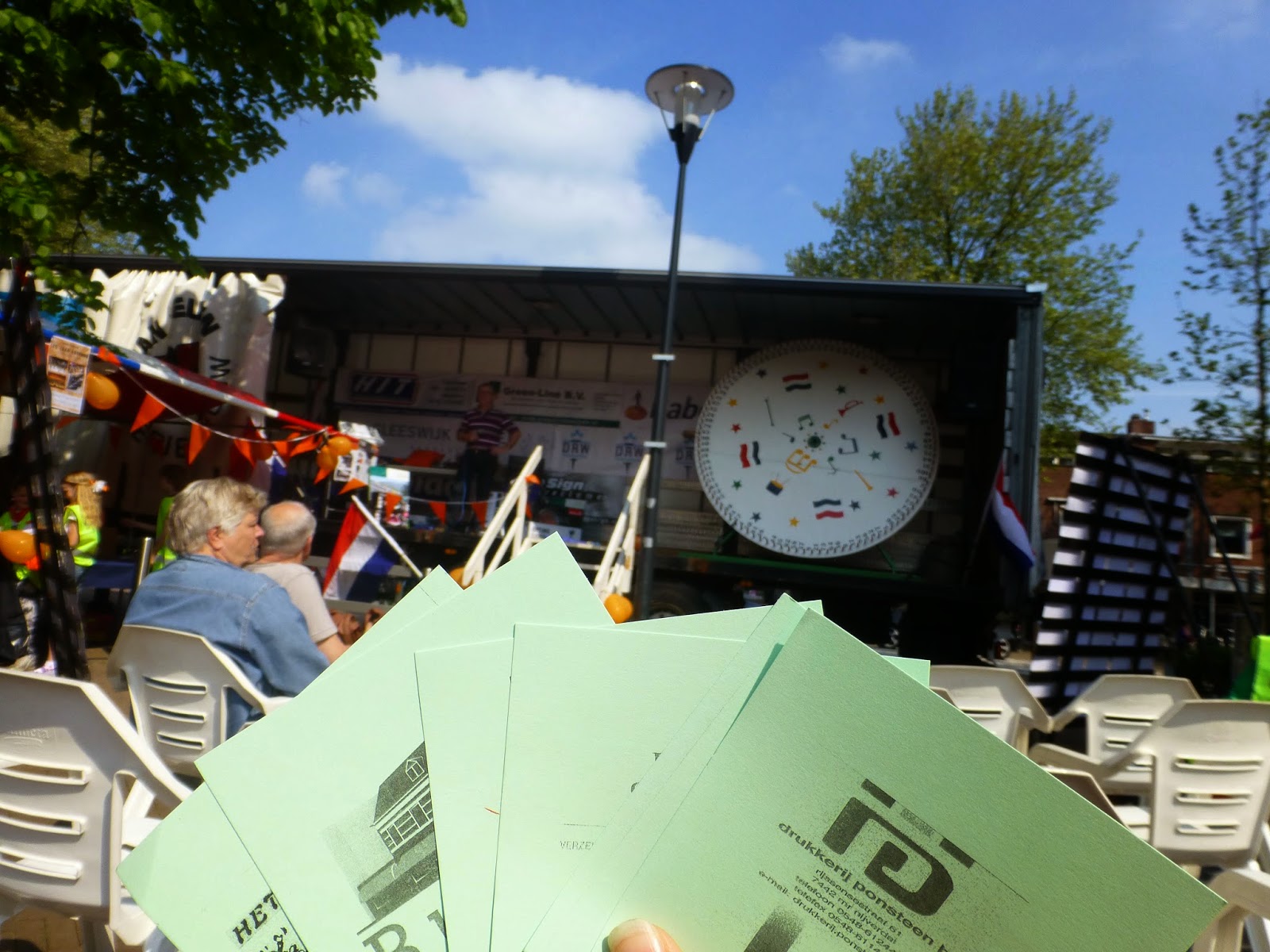 When I  came back to Hellendoorn the balloons just went up in the air, also coloured Red White Blue and Orange 🙂 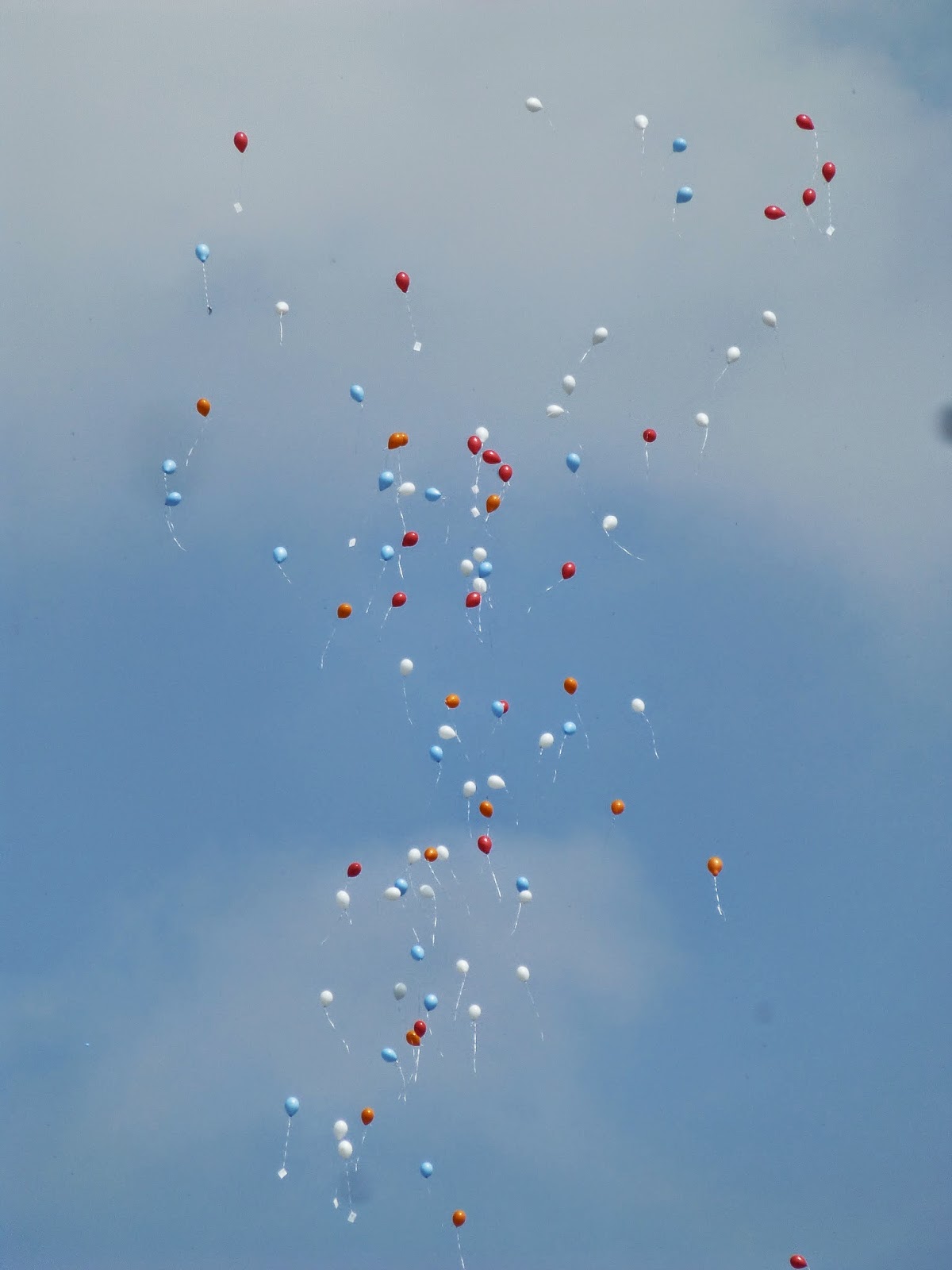 The children have written a small letter to go with it so they can get a message from who ever finds the balloon. The one that goes the longest distance will win something 🙂

Later in the afternoon the games start in Hellendoorn, it’s called: Slag um Heldern (Battle for Hellendoorn) Those games are a tradition already for around a decade in Hellendoorn. Several groups have presented themselfs the day before on stage, with a playful performance. Today they will try to defeat the other groups in summer games in the centre of the village. 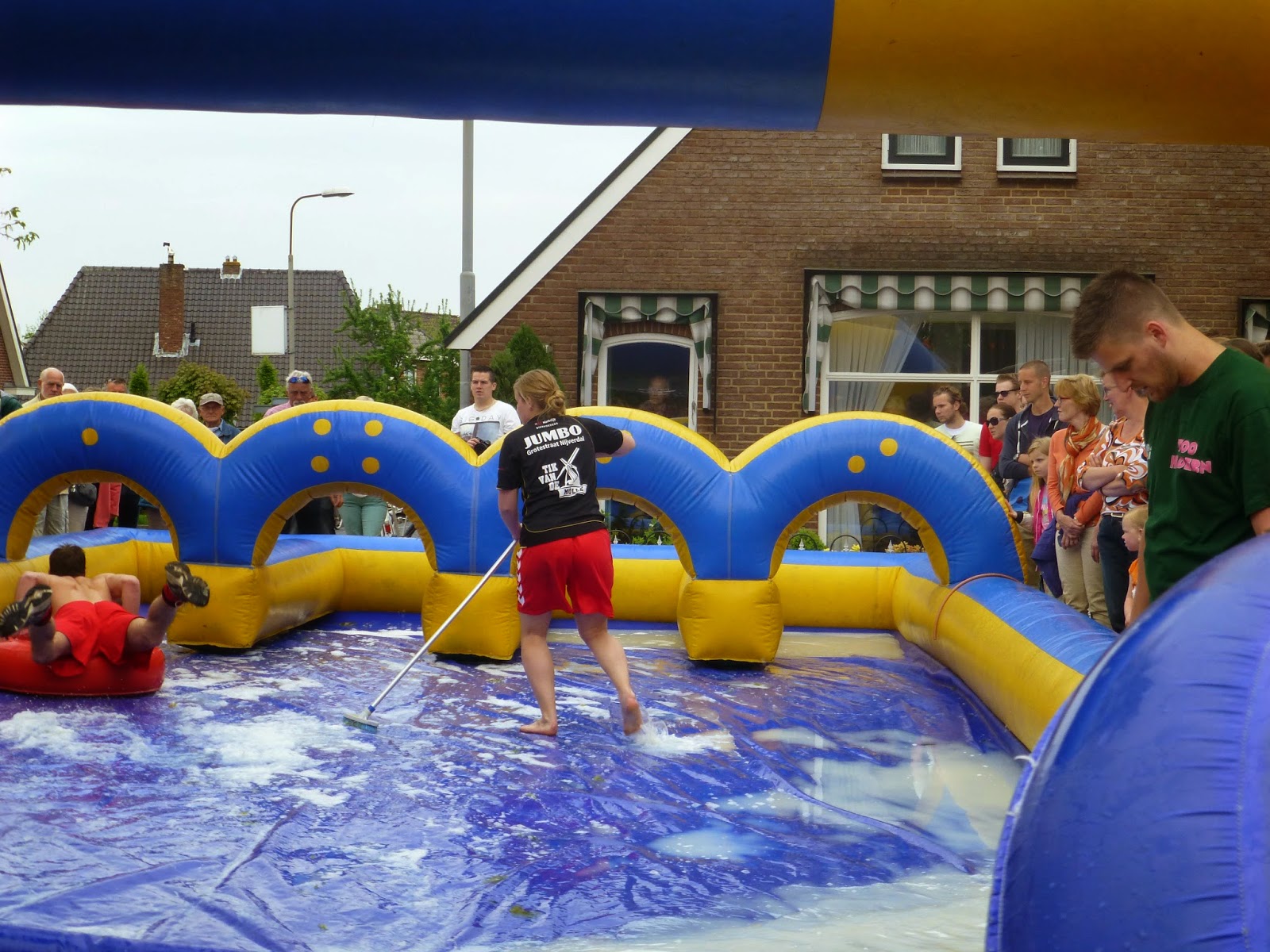 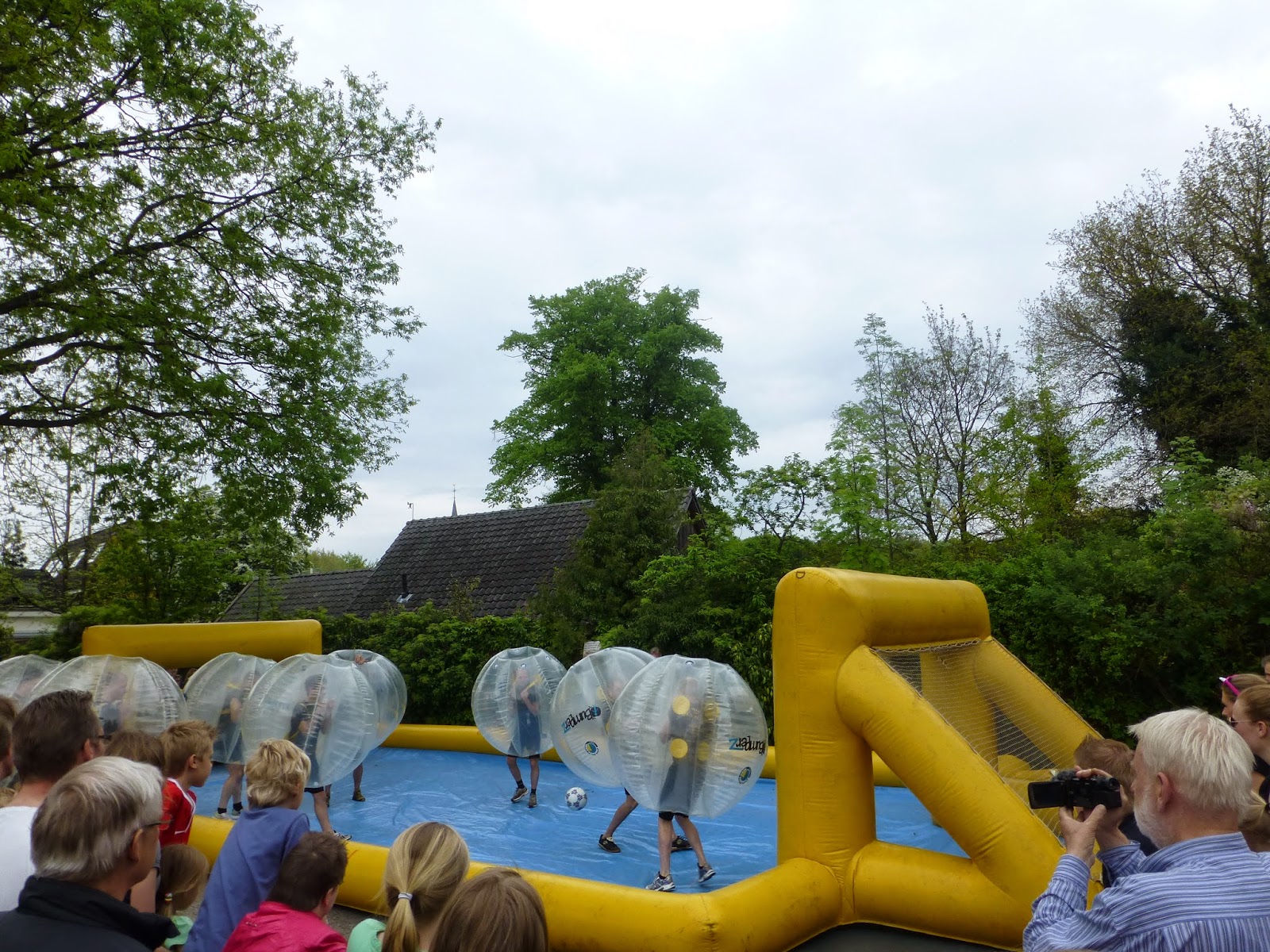 Some of the activities 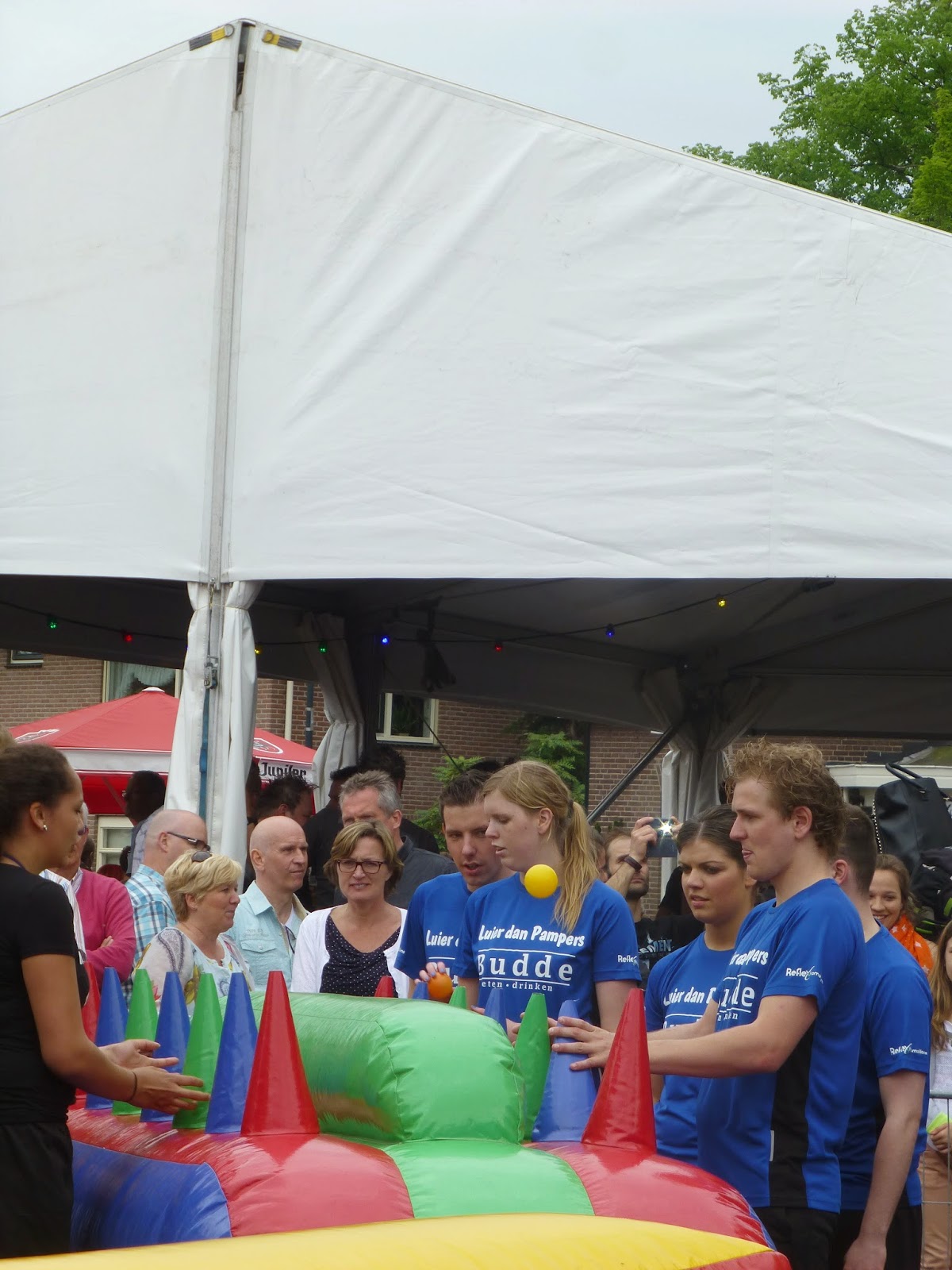 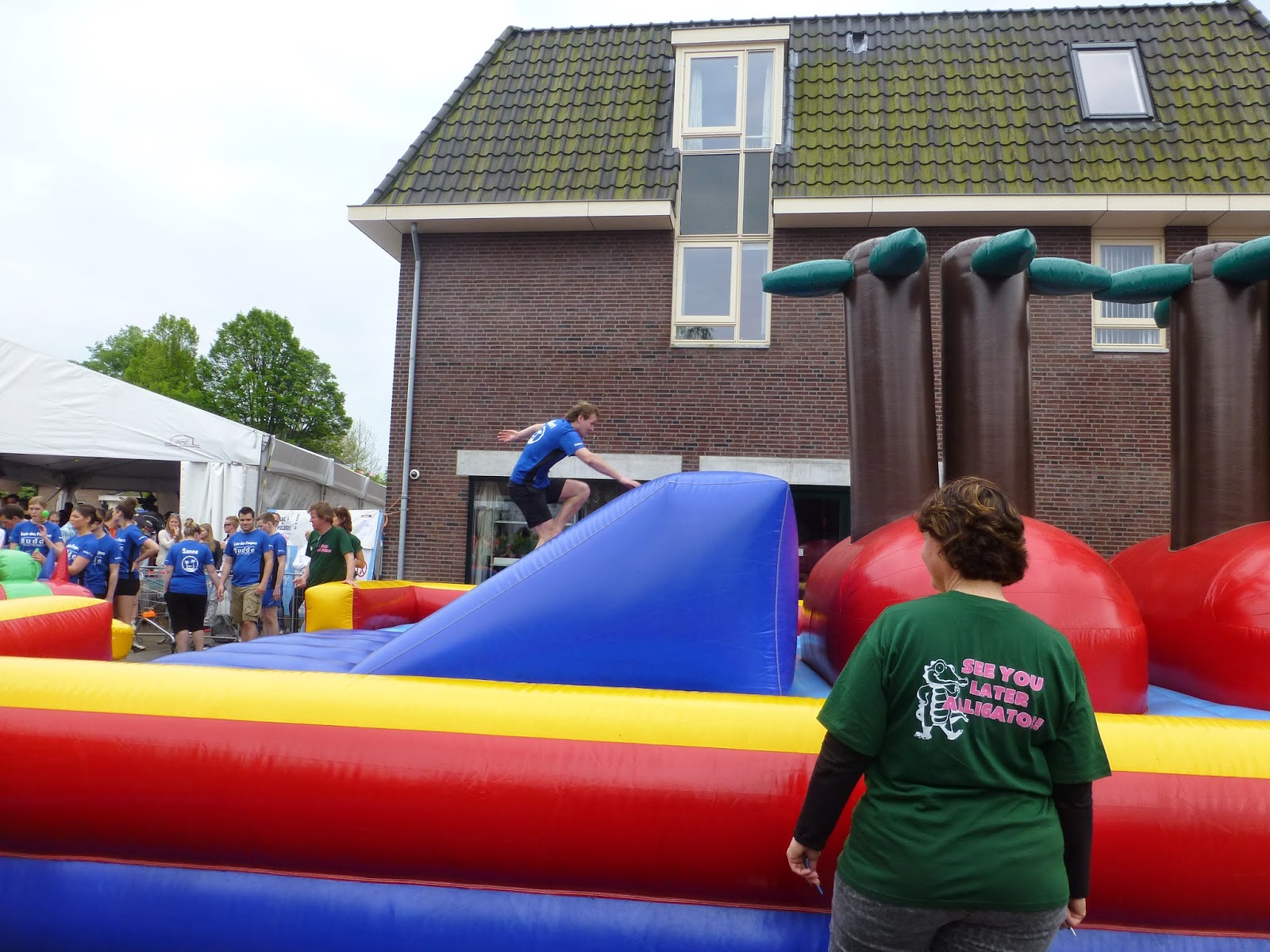 Everywhere in Holland, village or city, they will have their own activities and games. But everywhere are festivities, most will already start the day before. That was called Queens Night, now to be called Kings Night. Bands and performances everywhere in cities.

If you want to visit Holland in Spring time this is a good day to be in Holland, 26 april.

The Netherlands will be orange that day!! 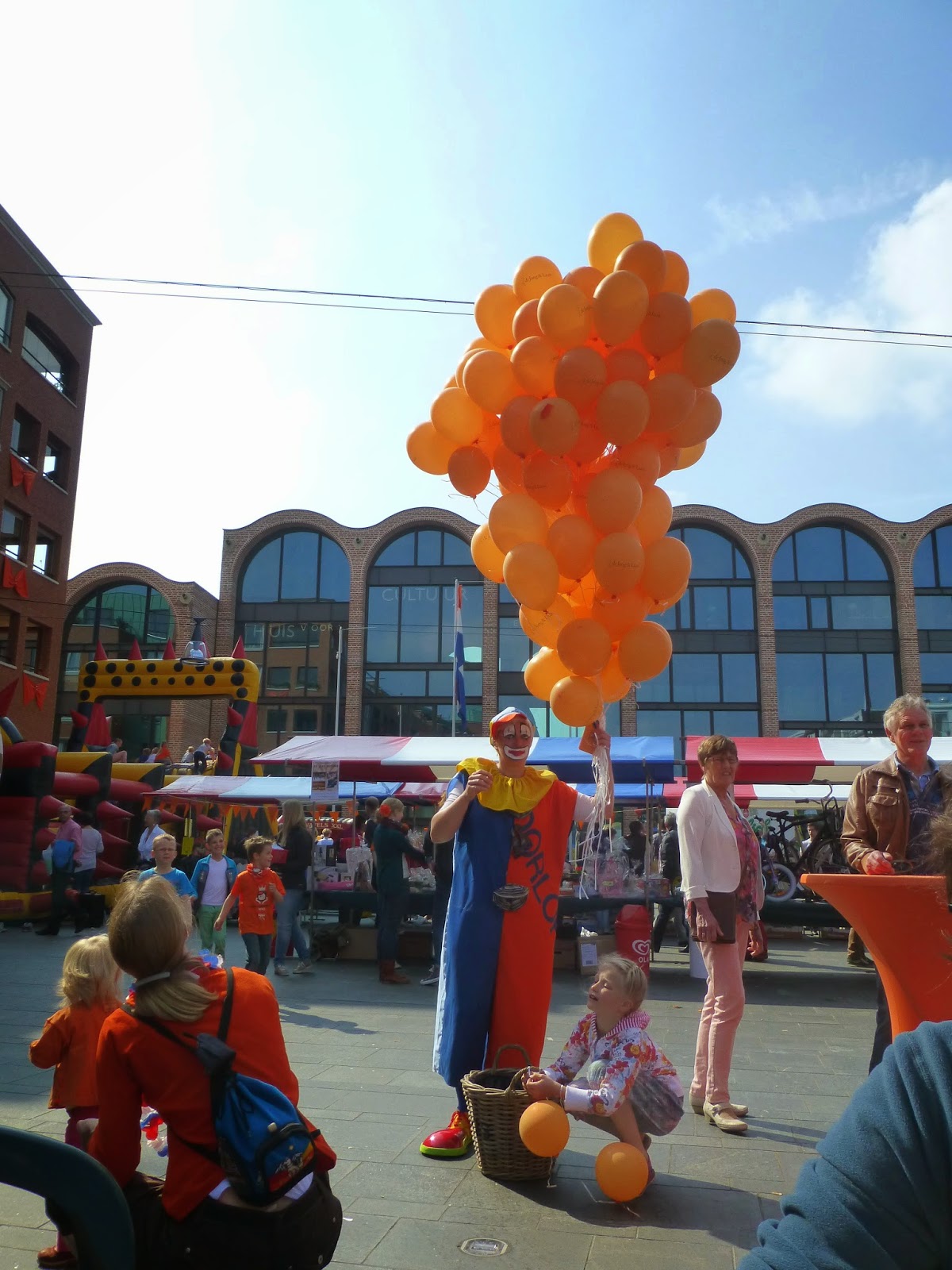