When I was in Malaysia I, ofcourse, visited the Taman Negara. It is the  National Park of Malaysia and has a tropical rainforest that is said to be 130 million years old!! Can you even imagine that?

I heard a lot about it! Not about animals even though there are tigers in the park and ofcourse other wildlife but mainlyt about the nature. It would be great for a couple of days! When I was in Kuala Lumpur I found a travelagency that arranged a 3 day and 2 night trip. I ofcourse booked it right away and went on the bus the next morning to the National Park!! The travelagency is located near China Town, next to hotel 5 Elements. It’s called Han Travel.

We went on a VIP  bus, a mini van. The drive there was good, it took us 3 hours. At the jetty we got some explanation about the 3 days in the park, we had to pay some taxes to go into the park and a fee to bring your camera. For everything we got tickets, breakfast, the homestay and the trips.

For the first ticket we had a good lunch with riverview, some nice nasi with chicken 🙂 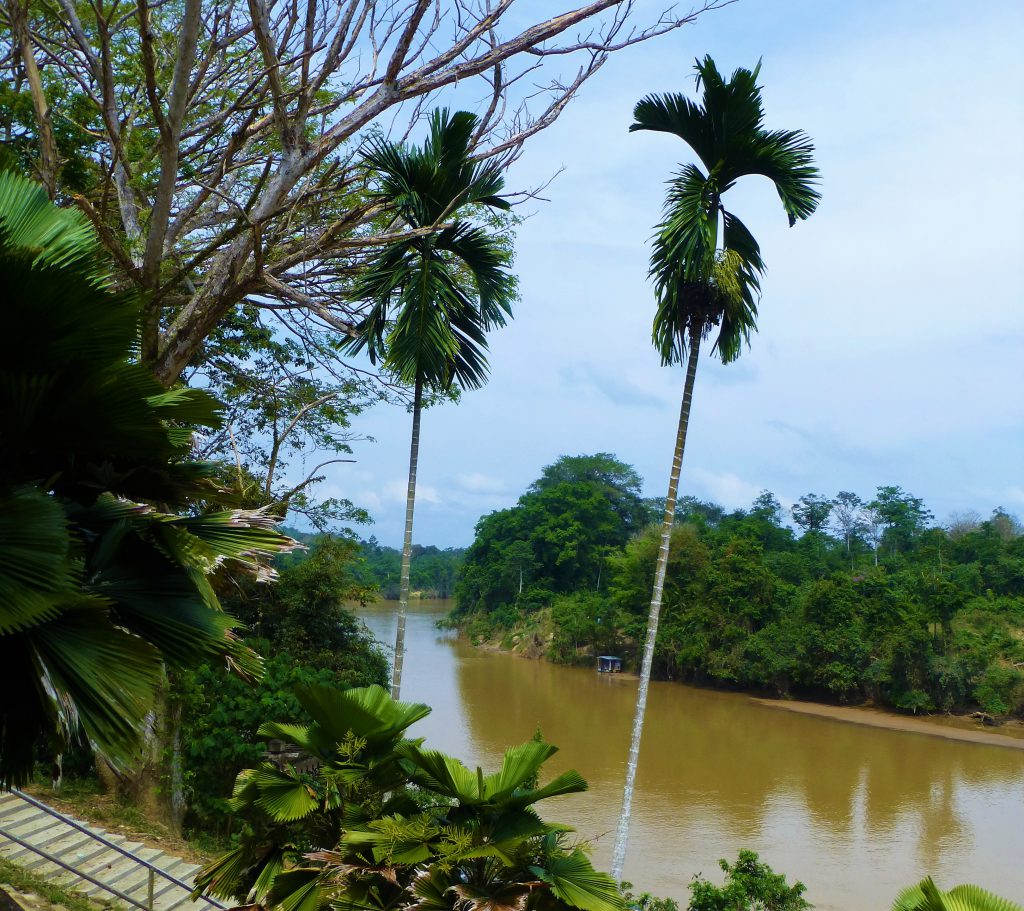 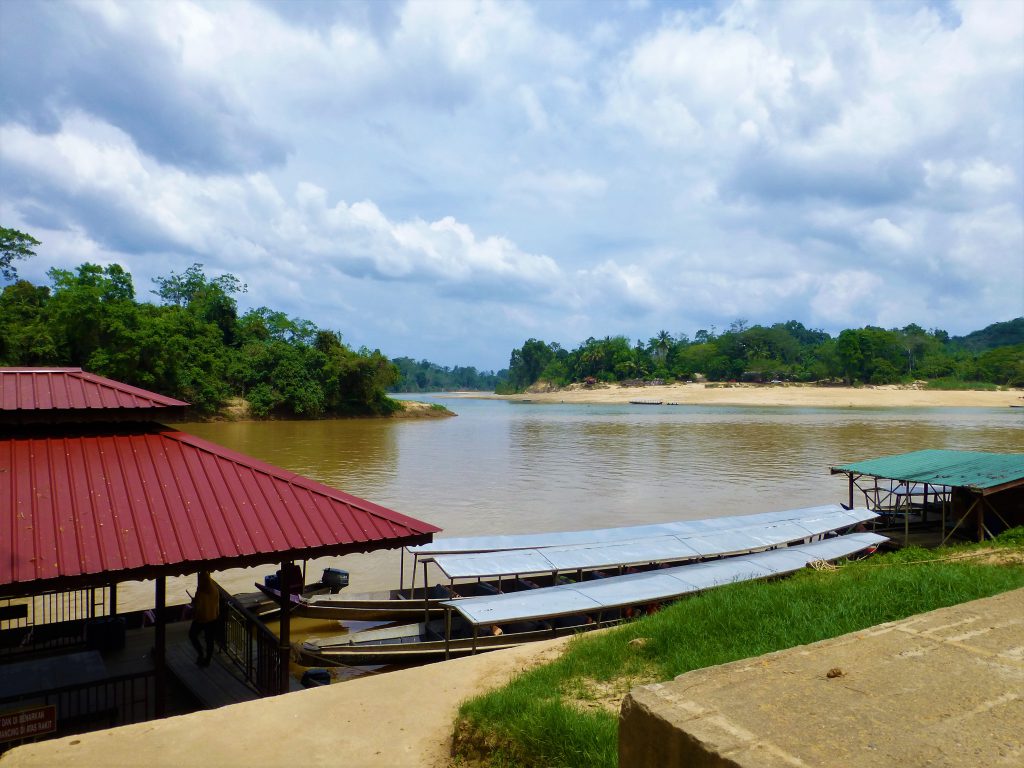 After lunch we went into the boat to go to the village we would be staying the next days. The boatjourney would also take us three hours. We could lay down really relaxed in the boat, I had a seat for myself. It was great. The weather was nice and sunny. We had some shade and sun and great views!! After an hour I started to get sleepy and I dozed off for a while, the wind in your face, the sound of the boat, some birds and the water. No sounds of humans, no traffic or what so ever!! 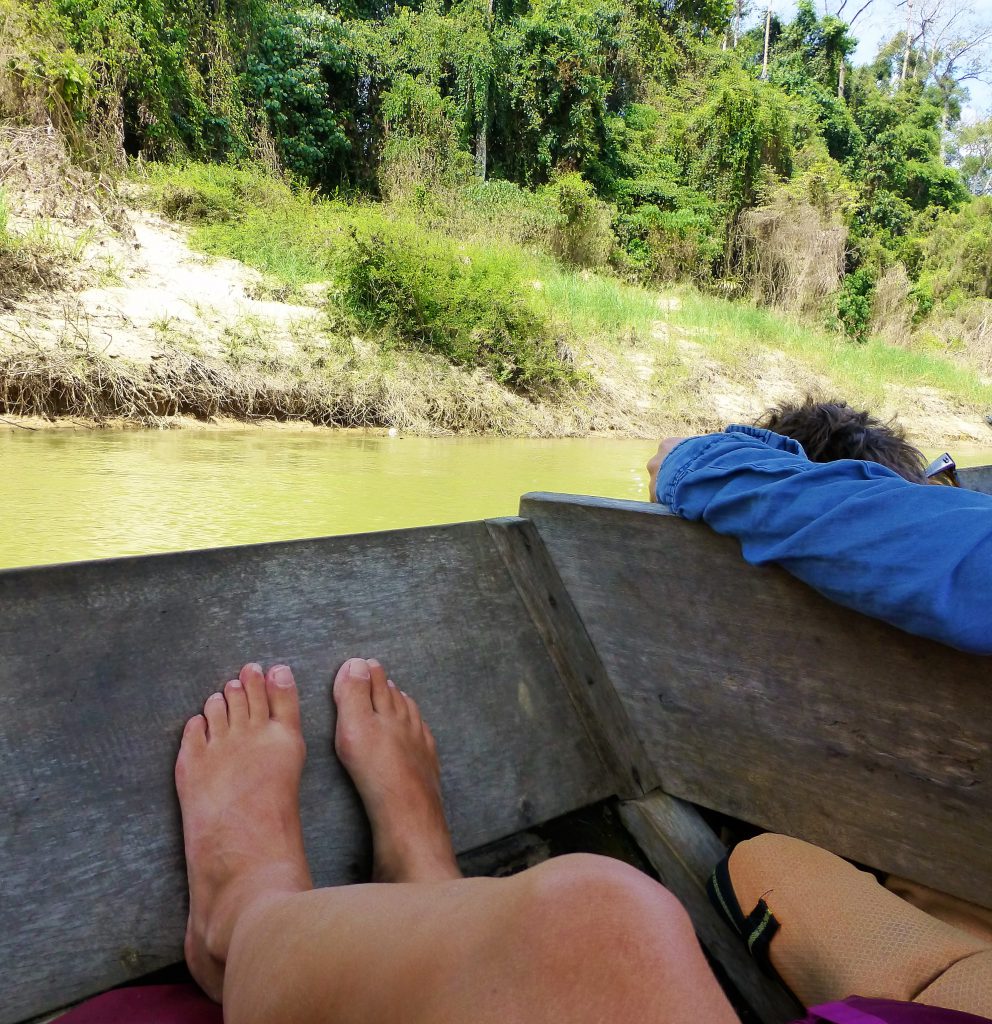 That first night there we got to see a film about the wildlife in the park. Also about the Orang Asli, the original people that live in this park, they still do. Also almost the same as decades ago. They are the only people that are allowed to hunt in the park, that is because they hunt only because they have to eat and they do it in a traditional manner. 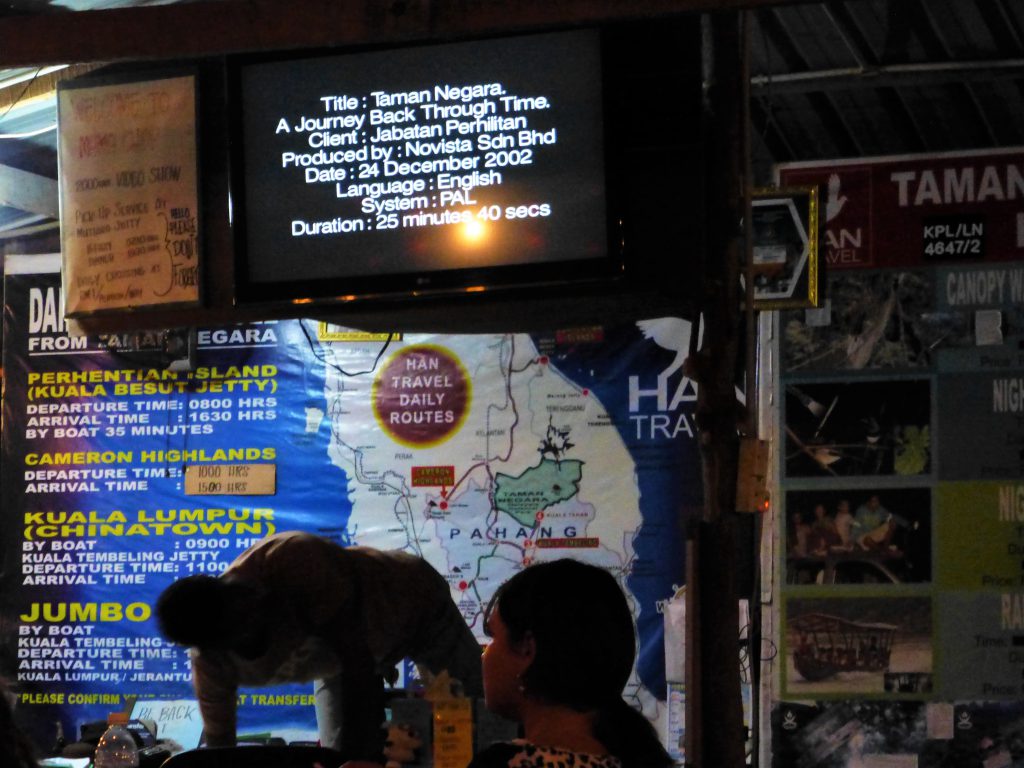 Preparing the Nightwalk into the Taman Negara

We had a trip planned that night. A nightwalk!! First question was if I had a flashlight… Hmm…I didn’t had that yet….ofcourse you could buy one there and they didn’t charge a great amount for it!
We were advised to put on long sleeves and long trousers because of all the insects you can feel at night. At first you hear them screaming, real high noise. What a terrible noise, those are big insects and are called Cicara. They explained me that they are under the ground for a long time and when they come out they will only live for a couple of days to mate.

We just saw them falling out of the sky.

There were hundreds of those screaming Cicadas. Screaming like hell, especially when they accidently touch you. Everybody was a bit scared of them, mostly because of the noise they make, I think. Picture this: it is dark, only some flashlights points in various directions.  You don’t hear a thing. And then one flies into one member of our group….the bug starts to scream and the member screams a high pitch also. I thought it was hilarious!! 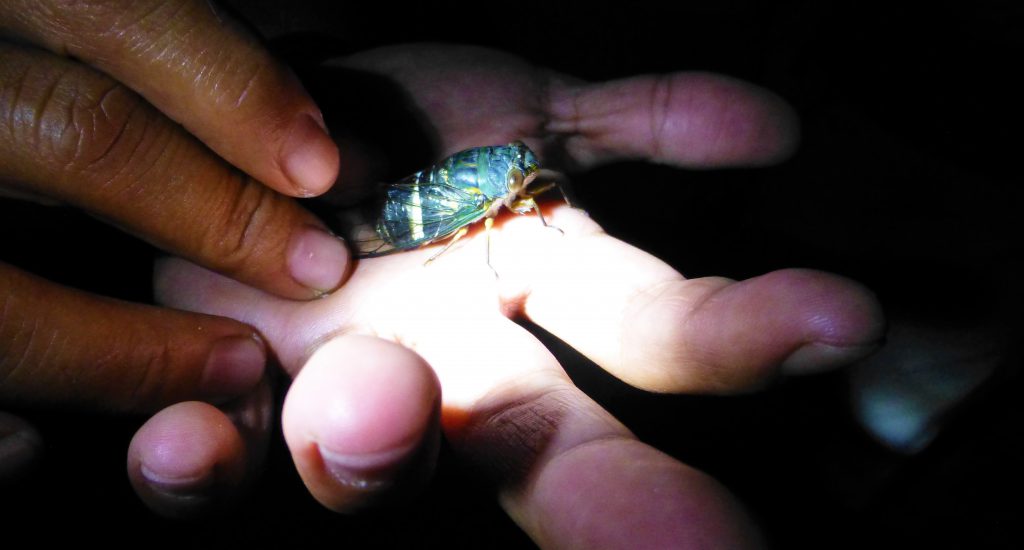 But we walked on, into the dark jungle of the Taman Negara. We could walk on a wooden path that was above ground level. The guide had located a nightbutterfly in no time. It was hanging on a leaf. It was bigger as my hand. 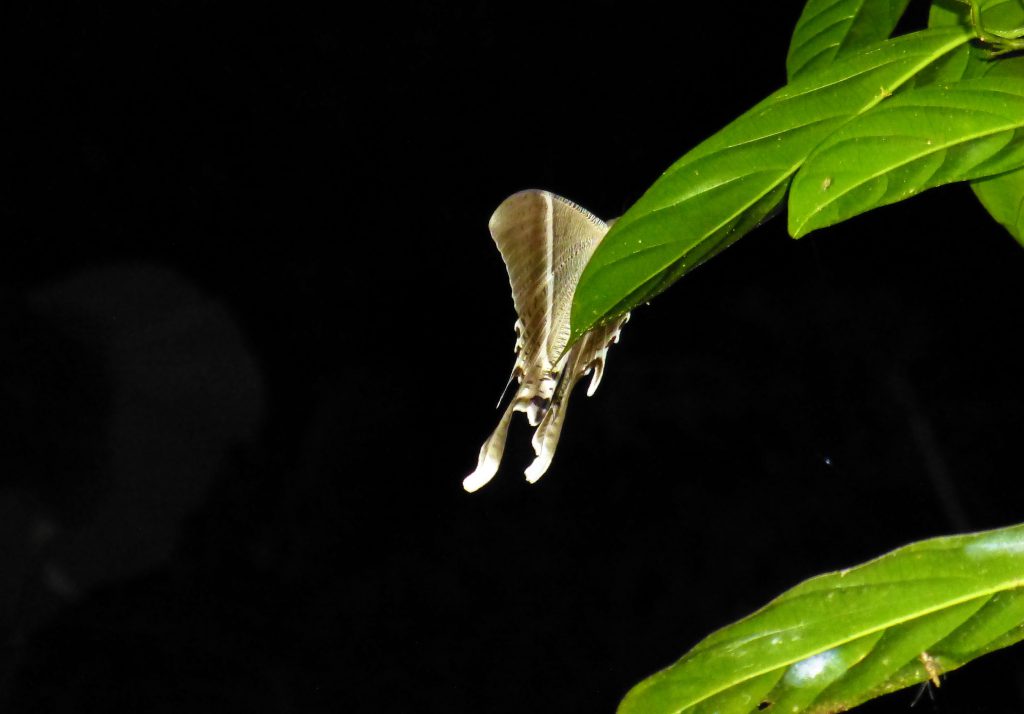 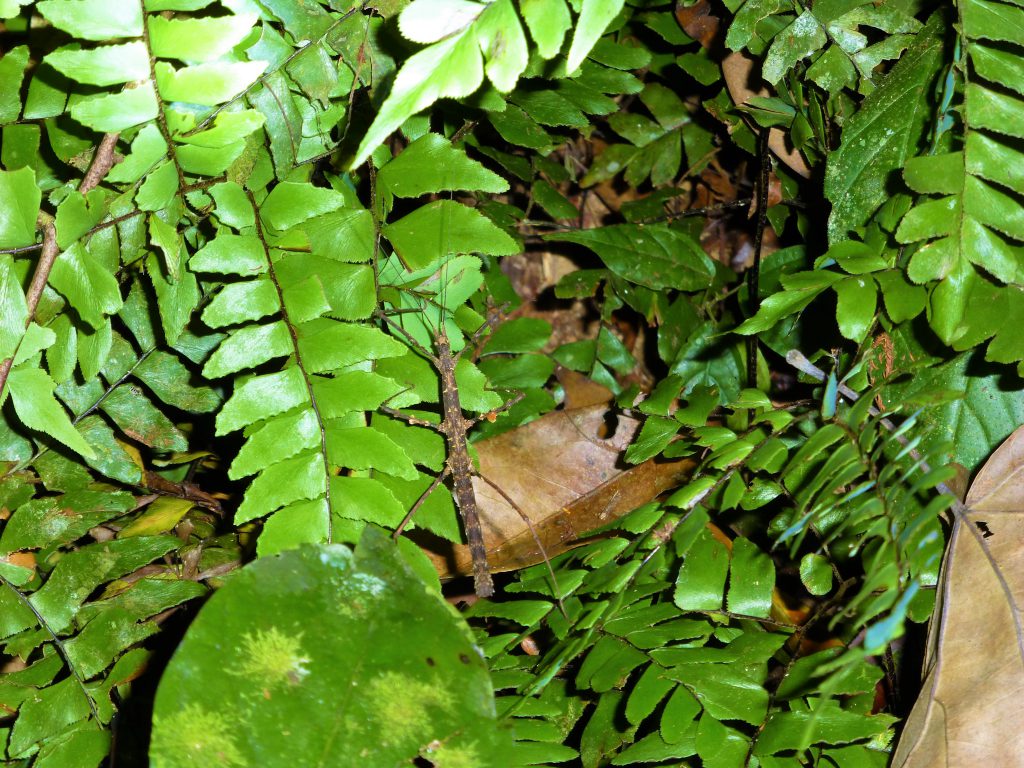 Nightwalk into the Taman Negara

After he saw a spider on a tree. He spotted those things in a flash. We tried to see this too…flashing our lamps all over the place.. I didn’t spot anything though.. 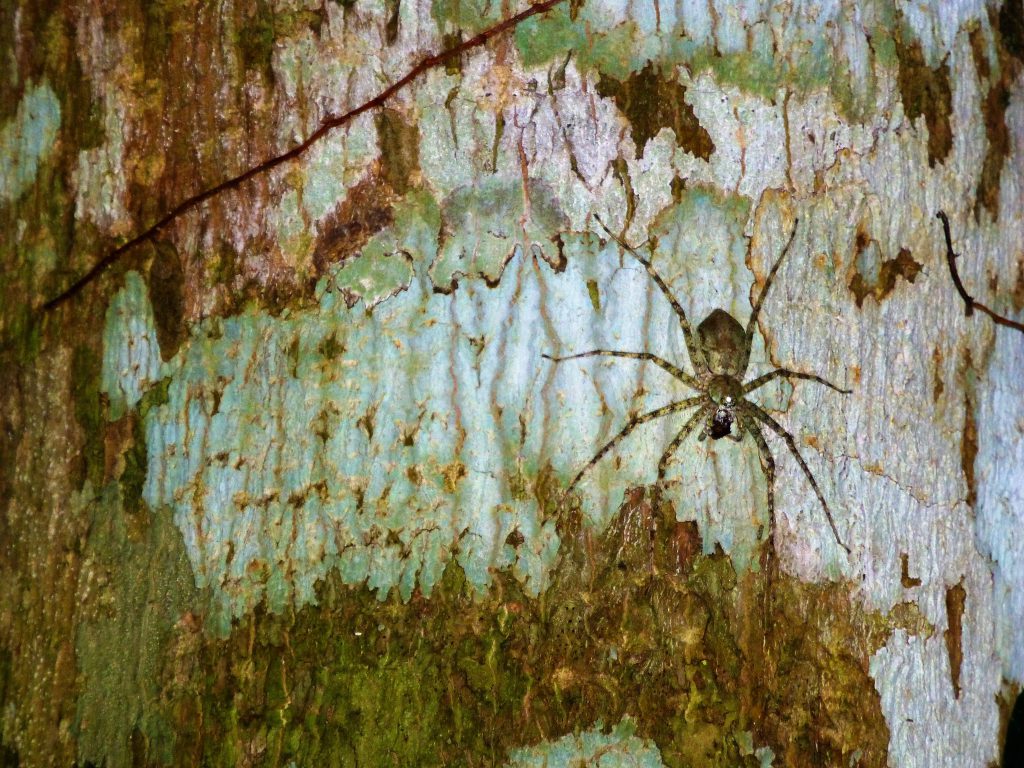 On the other side on a leaf he saw a flying lizard kind of thing. A small one, it was lying on a leaf and was able to fly told the guide. 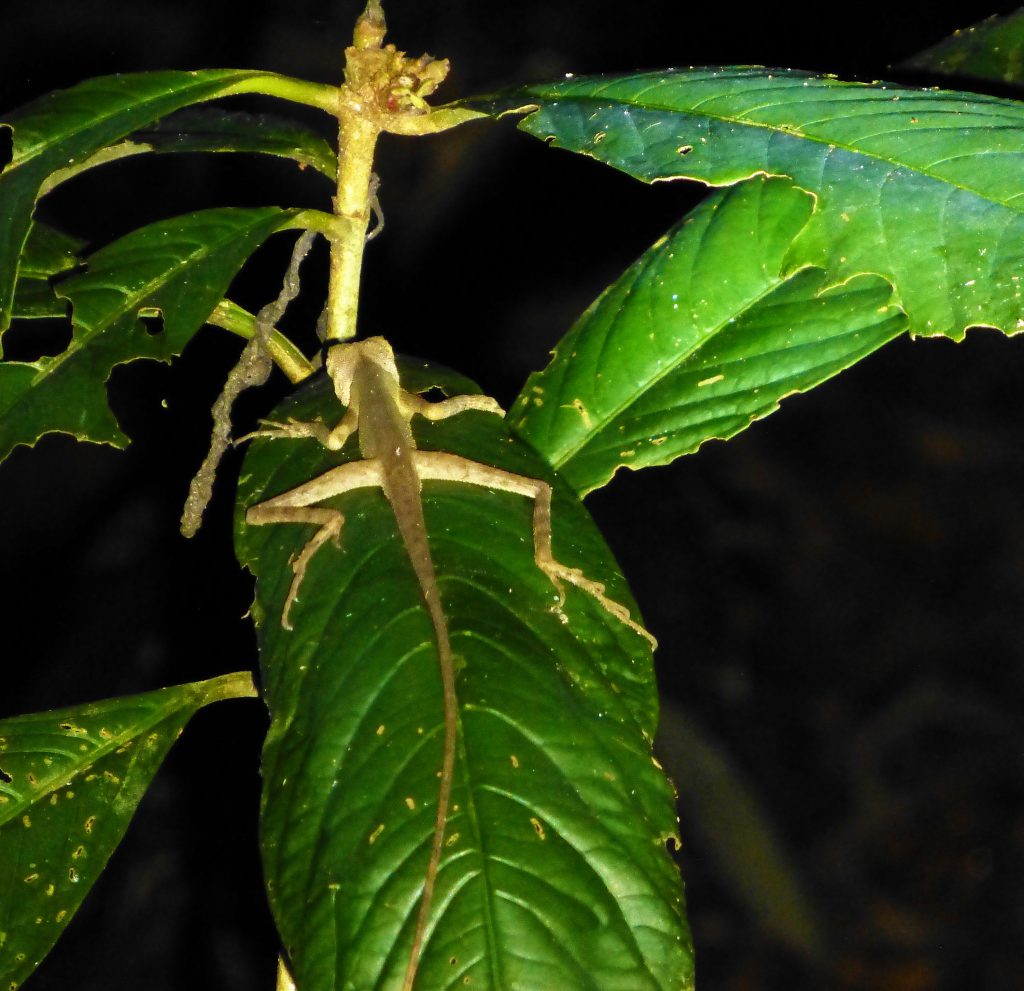 And he spotted a chameleon on the other side. What a great animal! 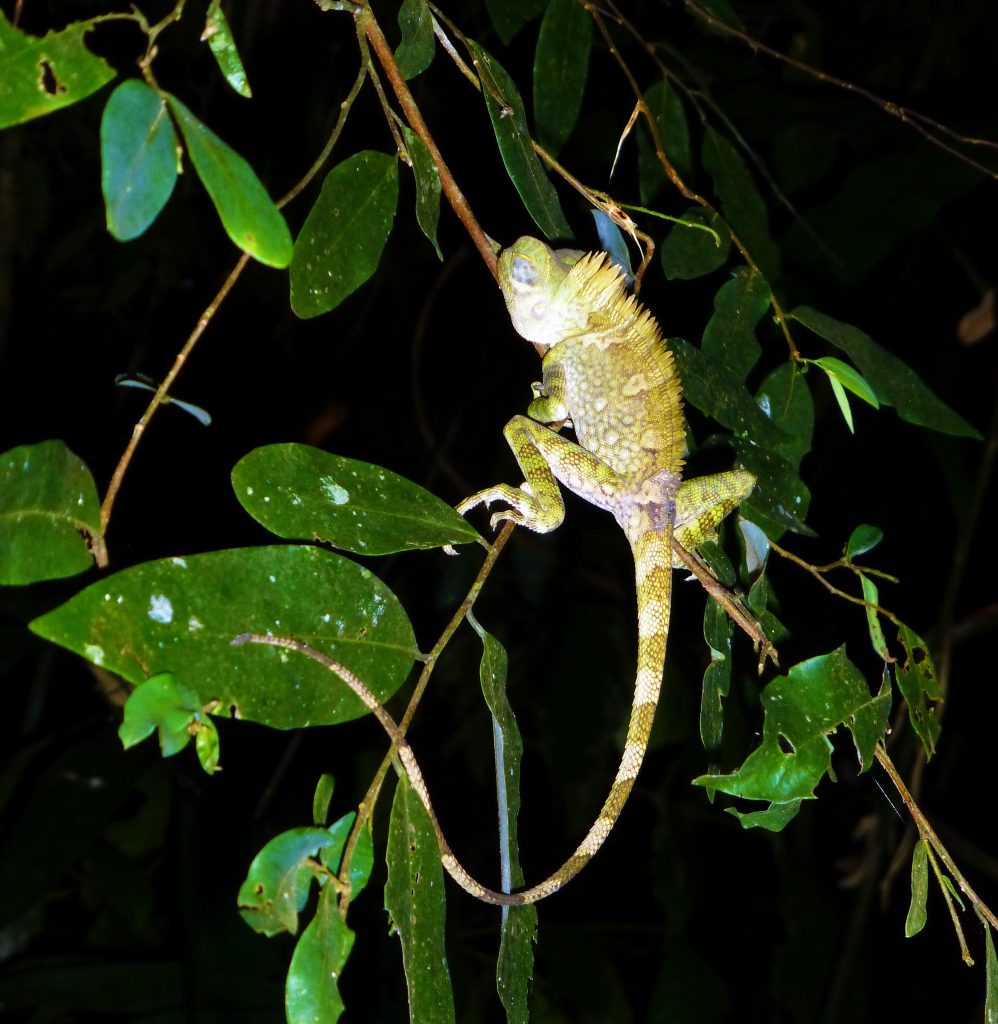 Also we saw this small green snake. It was funny how quick and good the guide saw things….and we didn’t find a single ant.. How hard we tried… 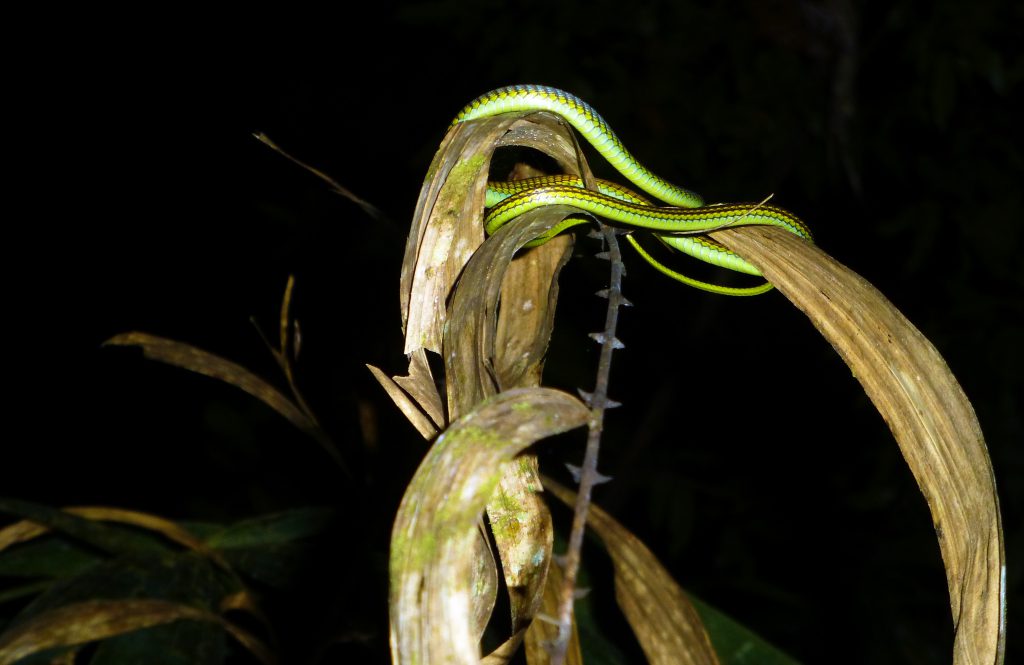 We went to a tree where we probably could see a big spider. This was his tree, was already there for a couple of weeks. Unfortunately the spider wasn’t at home 🙂 We did saw a small spider, still for a Dutch girl it was quit big.

Nightwalk into the Taman Negara

We did saw some kind of bird in a nest inside a tree. I didn’t get a better shot at it but you can see the bird and its great green colour. If you look good it looks like he has an insect in his beak? I don’t know.. But don’t you like that colour? 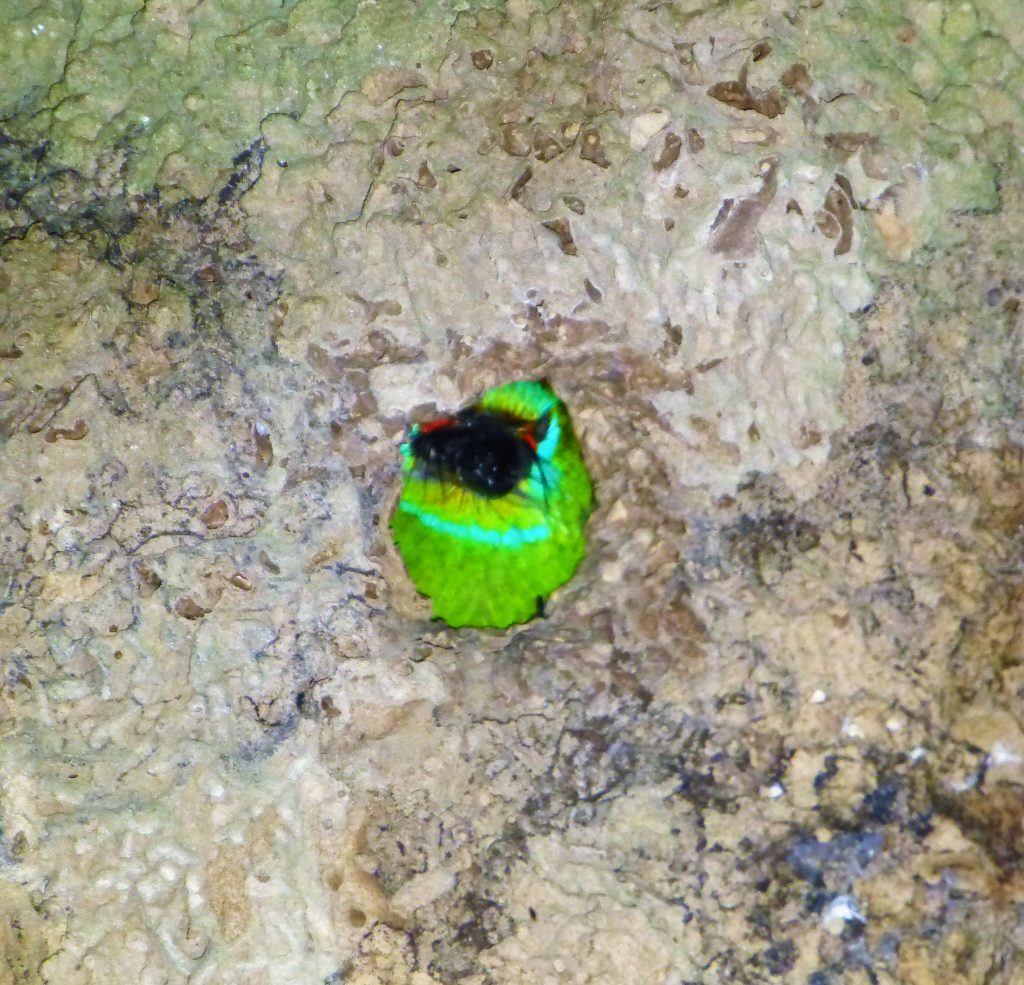 We sat also for a while in a watchtower hoping to see some bigger animals. But there was nothing to see at the empty place in front of it. We went quiet and dark for 10 minutes. What a strange feeling that was. 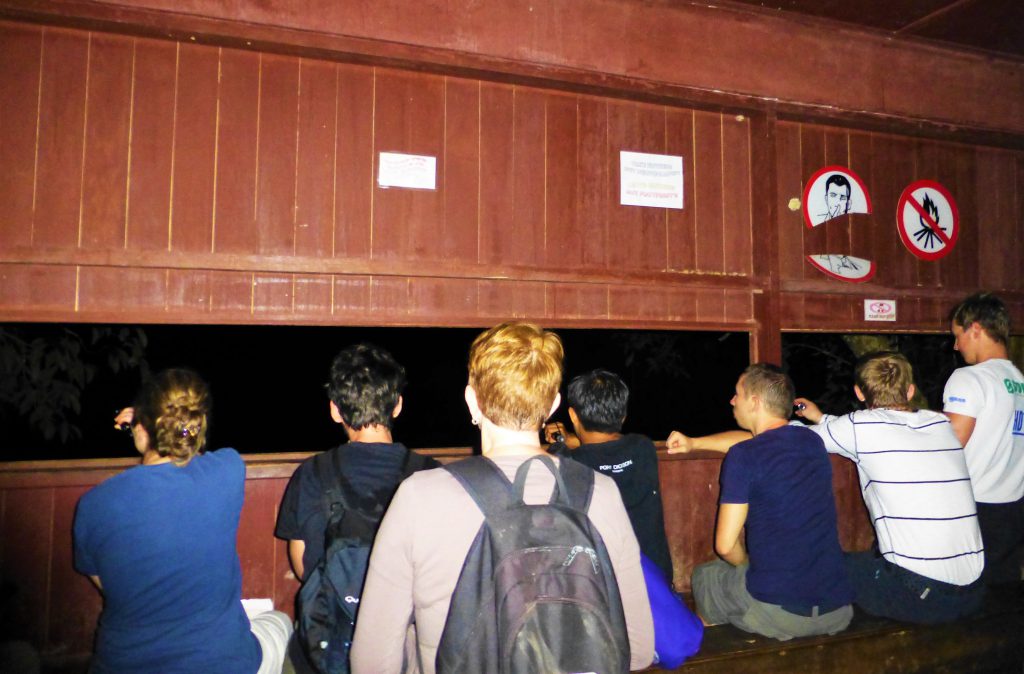 In the jungle, being still, hoping to see some animals, listening to everything. After a minute things got clearer because your eyes get used to the darkness. You hear nothing but then again you hear all kinds of little noises you can not explain. Great!!
When we turned on the lights we did see some eyes looking at us from out of the bushes on the other side of the plain. They eyes turned away and off it went. Don’t know what is was but it was great to see something!!

If you like to read about my walk on the canopy in the Taman Negara? click here

Did you like this nightwalk into the Taman Negara? 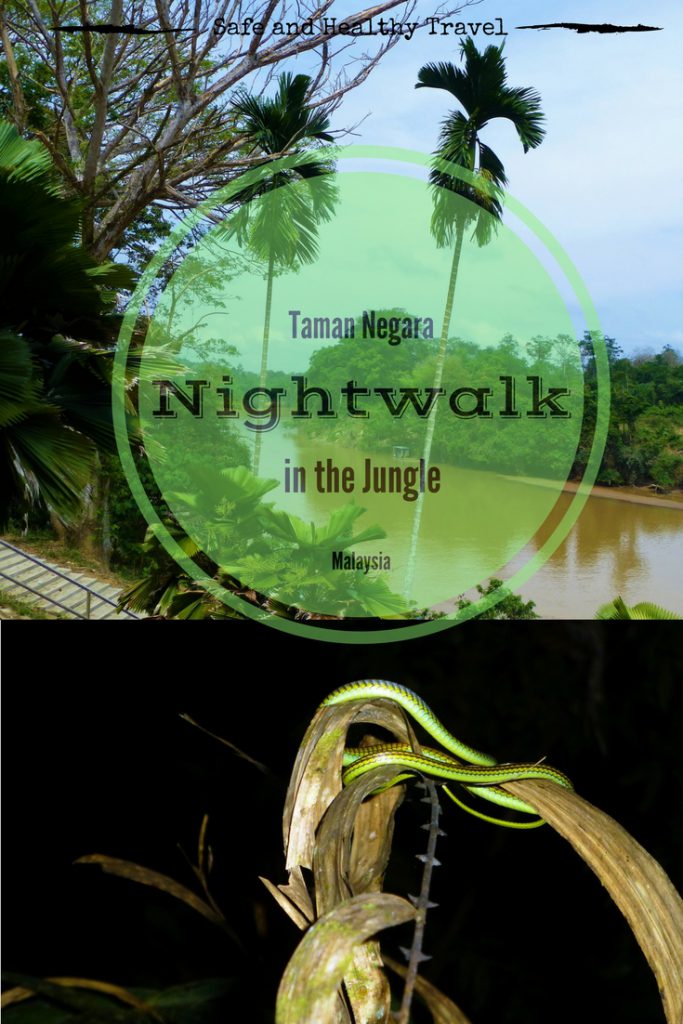 If you want to know about other trips in Malaysia:

Would you visit the Haunted Kellies Castle? Ipoh – Malaysia

Or can I inspire you to go to:

Wander Around the great city of Acre in Israel

Or taking a Roadtrip in Iceland?

Or be Active and Healthy by walking a Camino!!

First 200K of the Camino Frances