Can you imagine how relaxed it would be if you don’t have to think about your  next step? You just do what you did yesterday… And the day before yesterday…and before that day etc.. You can hardly imagine that in the hectic life we have in this time and age. But would you like that? What would happen if you don’t need to think about what you should do? You can start think about things that could be…
Isn’t that the reason that we become pilgrims?
It is strange  to realise that you are in the same rythm for the last couple of weeks. To realise that you don’t need to think about what you are going to do the next day because it is the same as the last 20 days.. In trying to explain that I realised it is the best way just to show you what a day on the camino as a pilgrim is all about. 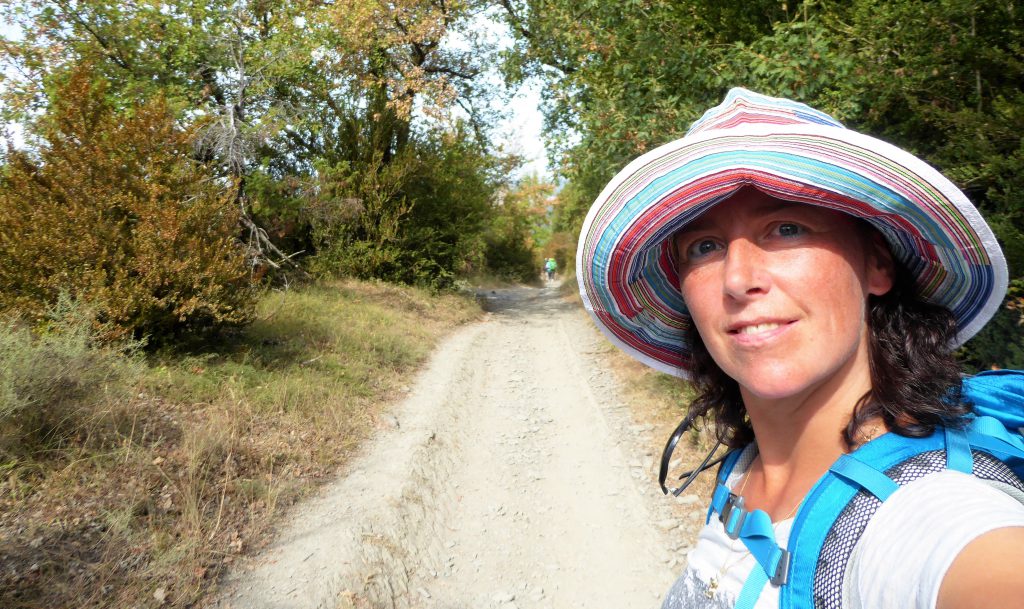 My second day as a pilgrim ( Roncesvalles – Larrasoana )

You don’t need much on the Camino. While walking you are satisfied just a couple possessions and on the other hand…you don’t want to carry that much. Everything that you carry that is unnecessary is a waste of time and energy. You want to spend that energy in a different way!
You walk where the pilgrim before you walked.. You are carrying food and drinks.. as much as you need that day.. You don’t need to think about the day after. It makes life delicisously easy and it makes you really live in the moment! 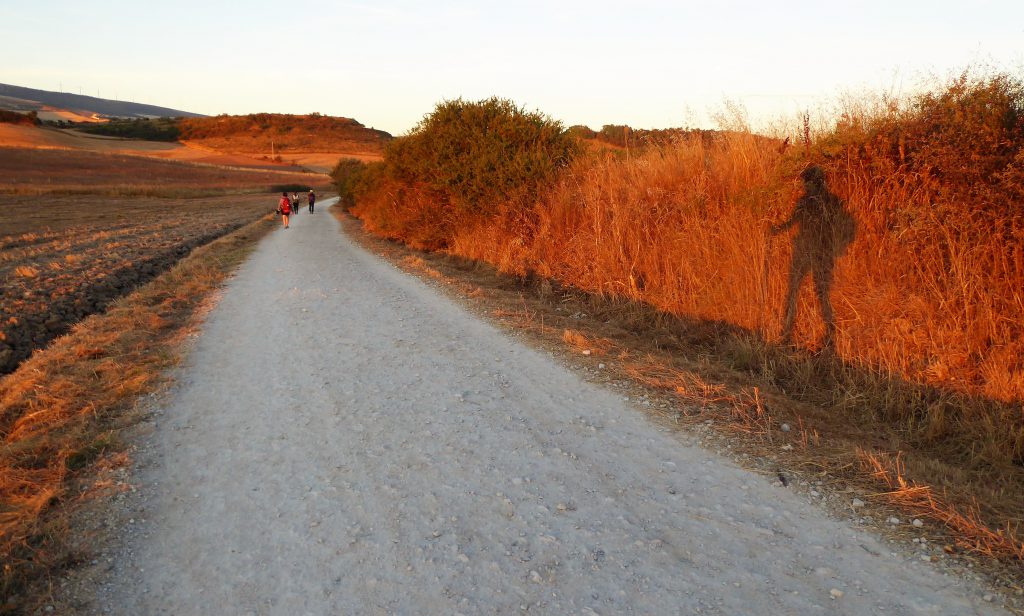 Because of this I started to think about my life, all the experiences I had in the past. That is good. Coping with all those feelings and memories and having more then enough time for that!! And I really think that things got evaluated better and fell more into place because of that.

This was the beginning of a 5 months travel and later this journey I would go on a 10 day meditation course in Chennai, India. I learned a different way to balance negative and positive experiences and undo the negative consequentions of them. ( Only written in Dutch.. 10 dagen gaan mediteren )

When I wasn’t walking alone I had conversations with other, sometimes in-depth… some times just about every day things. Sometimes about the Camino, to plan the route the day after.. But it was never about something that worried me, that made me angry or about something over what I thought I had to influince somehow..

With ofcourse a  Spanish Tortilla 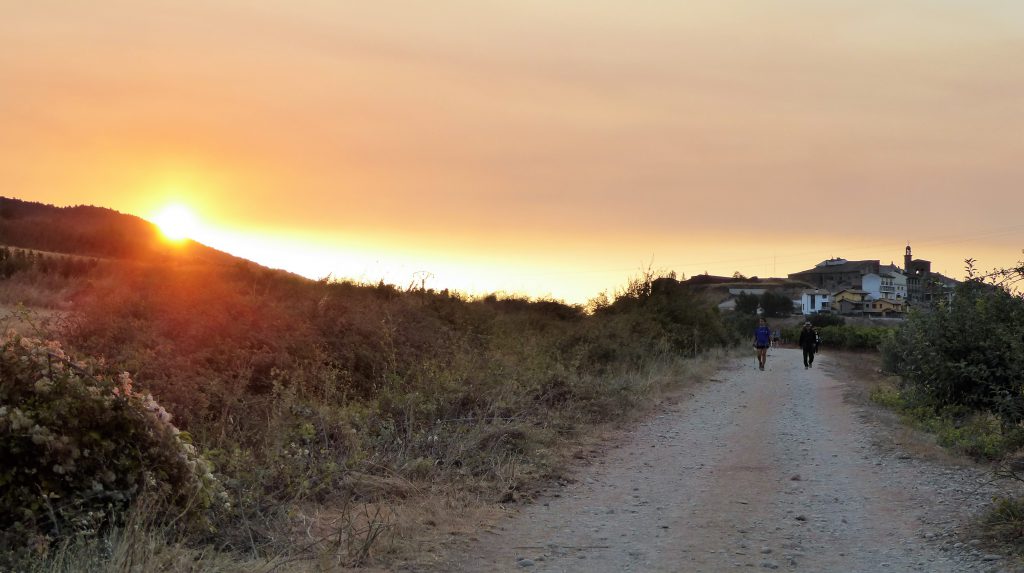 And don’t forget to look back for the sunrise when you leave that village!

Walking the Camino: Things are as they are. Each day my goal came closer. I was walking the whole Camino Frances, the full 780K, the way that would lead me to Santiago de Compostela.
Every day when I woke up I put on my clothes that were on my already packed backpack. That way you don’t make that much noise for the others that maybe sleep a bit longer. I put on my 8K backpack, got my walkingsticks and went along on that ancient old route. 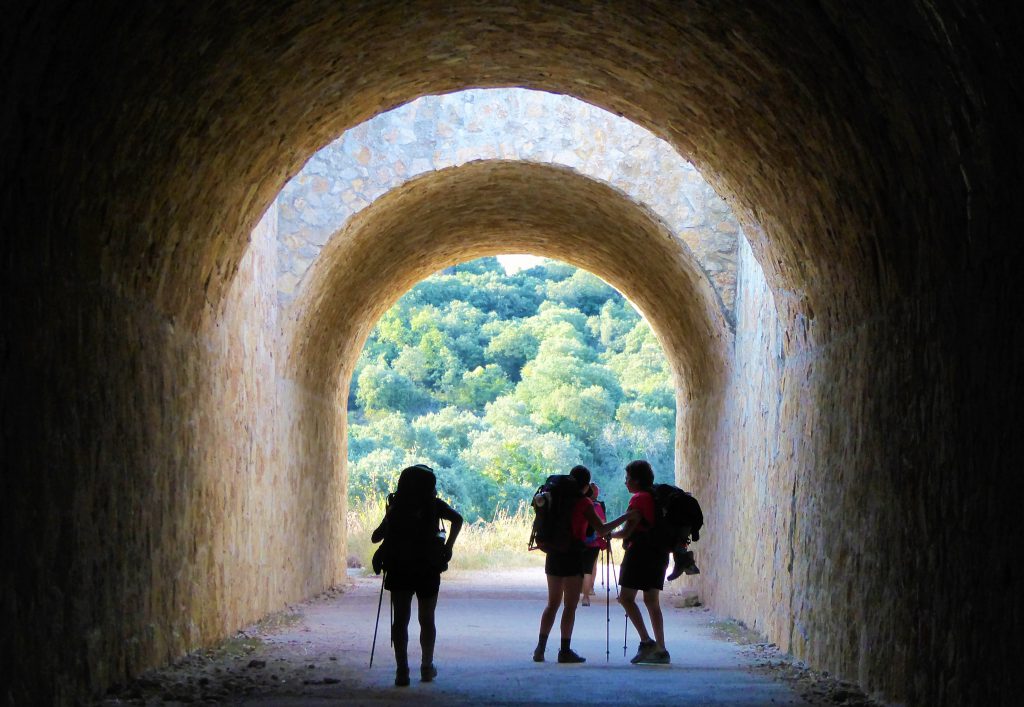 Every day I stopped at the first village to get my first cup of coffee and ofcourse a Spanish Tortilla for breakfast. Most of the time I sat down with fellow pilgrims and we talked about the upcoming day, which villages we would come through or special places that we might walk by that day.
Somewhere along the way I bought some bread and would eat that on the road, at a nice place with a good view or on a terrace. I took a long break and enjoyed my surroundings, nature or the village. Just taking my time to sip it all in!!
While walking that great Camino I was enjoying nature, the wonderful views the way gave me and the many villages I walked through during the day. Each day a new spot, each day another path, each day a new and different experience that in essence was the same…

And then, just after noon when I had walked about 25 – 30 K I started to think where I would stop. Most villages has alberques along the Camino so you don’t have to look around or sometimes I had my mind set on a special alberque and followed signs. Only once or twice the alberque was occupied when I came and I had to go to another or the next village.

I would show my credencial, get my stamp, at the alberque. Picked out a bunkbed, hoping to be in the bottom one 🙂 Showered, washed my clothes. Just a small rest, feet up. After that it was time to go explore the new village I was in. Buy some fruits, drinks or other supplies for the next day. I enjoyed my pilgrimsmeal with other pilgrims and went to bed around 8 or 9 in the evening. 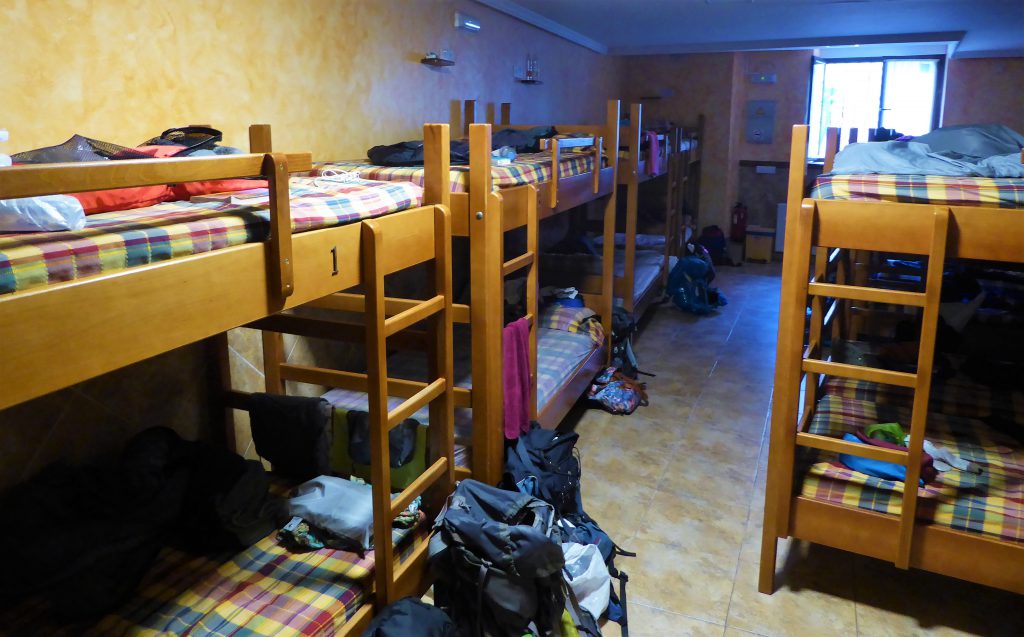 Resting, sleeping and the next day starts with the same rithm. The same feeling and the same goal…

I just had the best time!! I started by myself and when I arrived with lots of friends!! I had never expected it to be that great! Starting the day with pilgrims, not to walk by myself and not to make only my own choices!! It’s not something I am used to … 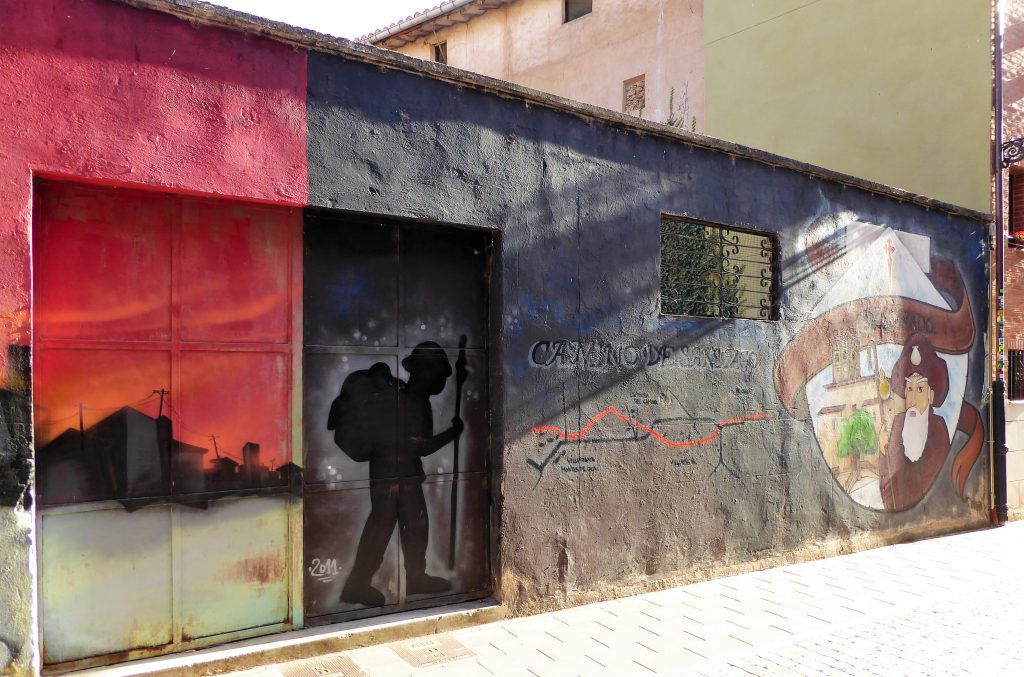 Can you imagine being a pilgrim in Spain for 35 days?

The best tip I  had from a fellow pilgrim was to drink as much as water as I could during the evening. That way my body could hydrate and my body would have enough for the day. Your muscles work so much better when they are hydrated, it prevents cramps and muscle contractions. And that is something you don’t want to experience along the Camino!!
Another benefit to it is that in those evening hours you have a toilet closeby. During the day I would drink water, coke or coffee too ofcourse… But I knew my body would get what it need during the late afternoon and evening to be hydrated well. It was still hot in september when I was walking the Camino so I needed lots of water!
Along the Camino you don’t always have a toilet within 1 or 2 K 🙂 We do walk outside villages and in nature so you can go hide in the bushes and do what you need to do… But I’d rather waited for a cofffeestop!!

There are a lot of watersupplies along the Camino. I always filled my bottle at these public taps. When leaving the alberque I got my water from the tap in there. That water is cleaner and tasts better. The water you can get out of the public taps is mixed with chlorin for safety. Not everybody liked the tast and not everybodies stomach liked it.. The water is good for consumption and you should just try it yourself. Or just fill your water when you by your cafe con leche 🙂

I bought a new bottle of water every other day 🙂 These bottles are lighter then a bottle you can refill. Every oz. counts on the camino so a plastic bottle from home that weighs more…I wouldn’t do that.

Several times I got a nice footbath from the volunteer at a alberque to cool my feet. The water was filled salt and vinegar. This is good for you soles. It hardens your callus and so less chance of getting blisters!! Because that is one thing you can NOT use on the Camino!! 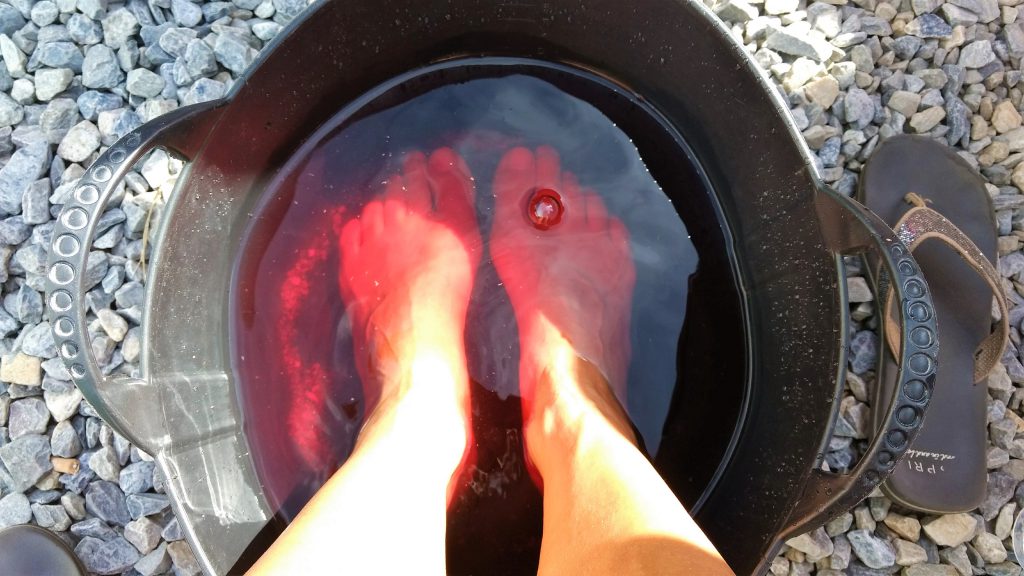 I didn’t have any experience with blister before the Camino… I was happy with that ofcourse! But… I had 5 blisters during my Camino and the present of them was that they came all in once!! Just at the moment I entered the Meseta I got 5 blisters in one day!

The Meseta is a Spanish plateau, the Camino runs 150 – 200 km through it. It is relatively flat plain and for a lot of the pilgrims a tough part of the Camino. After walking over a week you’ll get to this part.. 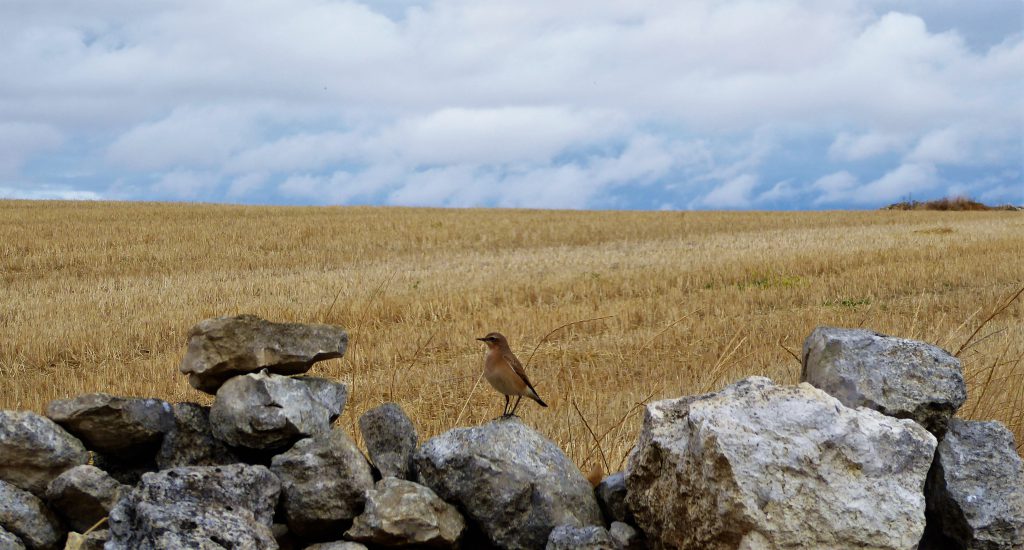 You can just walk with blisters! The first metres will hurt like hell!! After that you’ll feet will sink in your shoes andthe blisters will place themselves somehow. Days 2 and 3 were really tough for me and I did take a painkiller in the morning to start up.

And the best thing… The blisters weren’t getting worse by walking. If you would just stop and sit them out it wouldn’t mean that they would be gone earlier.. You can just walk on without making things worse!!

I started early each morning. I was walking for an hour at least when the sunrise started and so I would be walking with a lamp to lighten my path. So if you want to see the sunrise you need to pay attention!!

Why you ask? Well…the sunrise will always be behind you!
The whole Camino you walk away from the sunrise and so you need to check behind you every now and then to get that great spectacle of great colours!! You know how quickly it sometimes appears and disappears again. 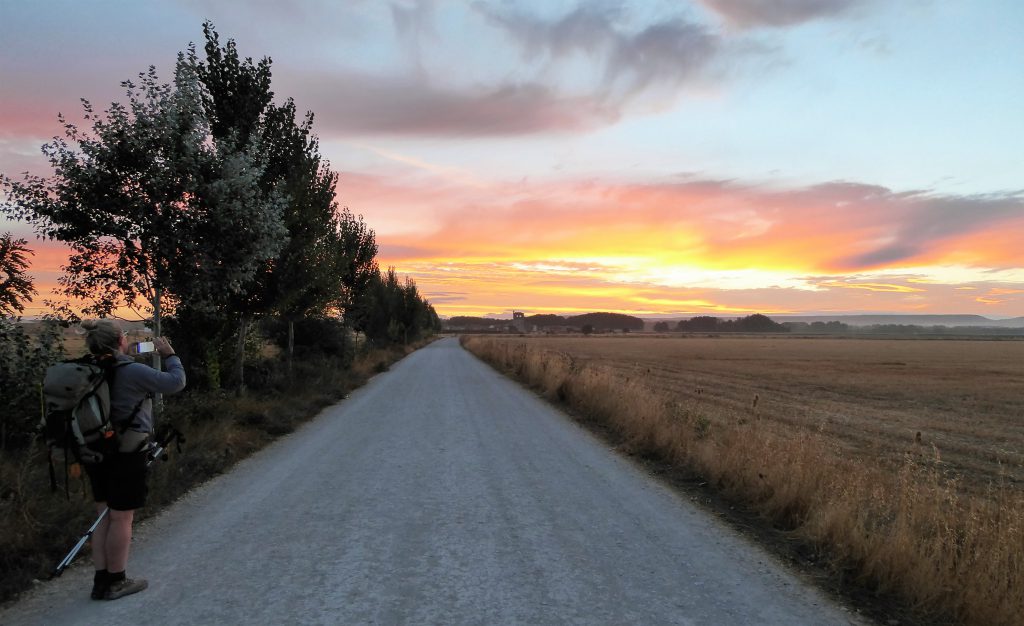 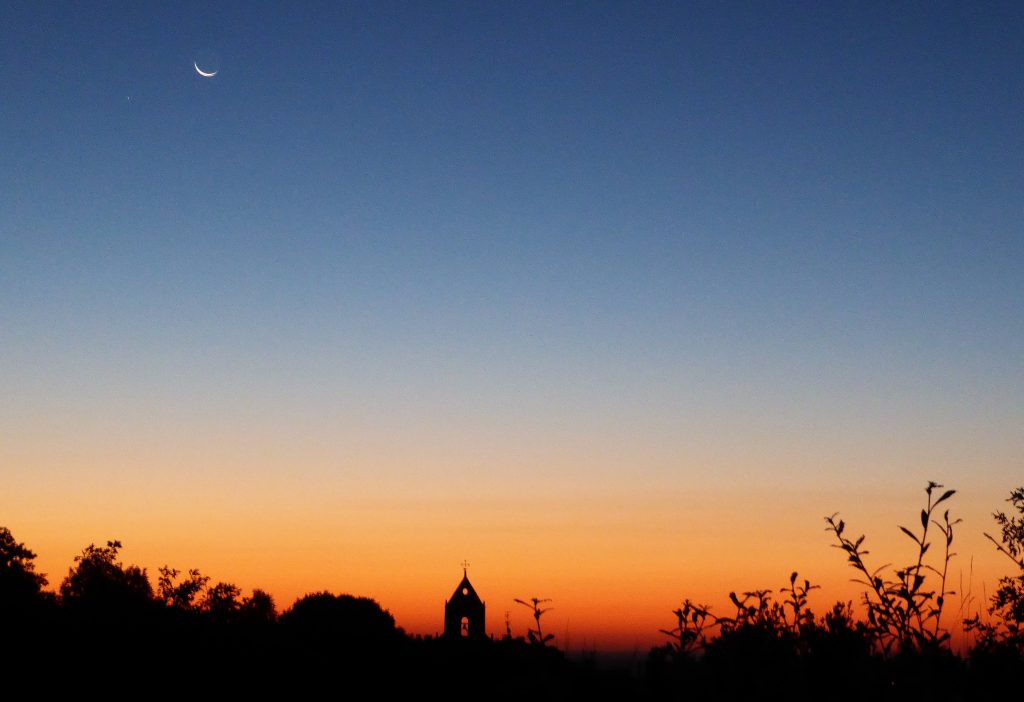 Do you want to read my experience along the way? I wrote them in pieces of 200K so you can start at The First 200K of the Camino Frances. 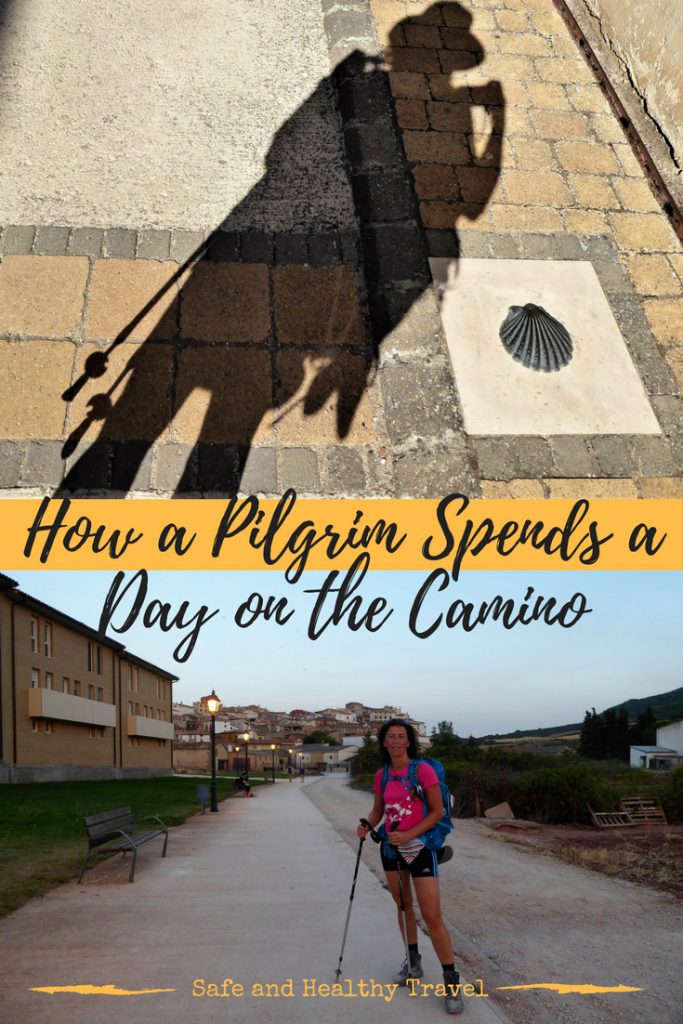 You want to read some other adventures?

7 Times Must See in Stockholm -Sweden

Wandering around the Old City of Acre – Israel

Crossing Around the Sanddunes of the UAE

Or can I inspire you to do some Yoga?