History of Kinderdijk
How does Kinderdijk got his name?
Entrance, costs en duration

This is one of the most Famous and Touristic Parts of Holland:

I mean, every tourist I know talks about Kinderdijk. But I was surprised that a lot of my fellow Dutchies didn’t know the place…untill I showed a picture 🙂 Then they told me they had seen pictures!! Just as everybody else in this world!!

It was on my bucketlist for a long time of destination to visit within Holland. I always thought it was just for tourists and maybe was even build for them. But it has a great history and a real Dutch one too! 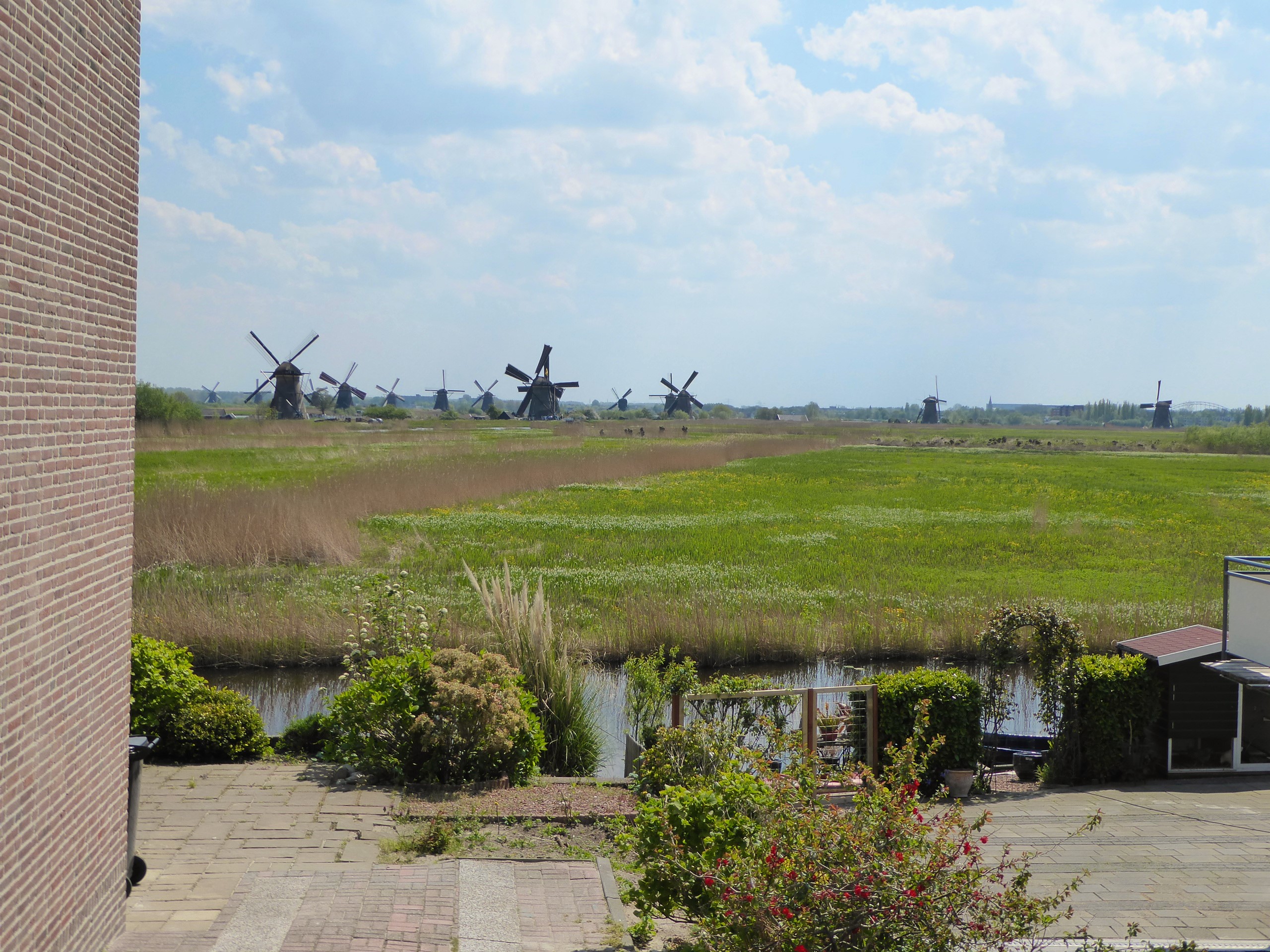 Can you imagine that you sit in your backyard and this is your view? I cycled on the mainstreet of Kinderdijk and looked in between the  houses and to my surprise this was what I saw!!

Along the water the mills are carefully put next to eachother, as if they were put there to pose for the many pictures all the tourists are shooting every day again and again.
Why were they put there in that manner? 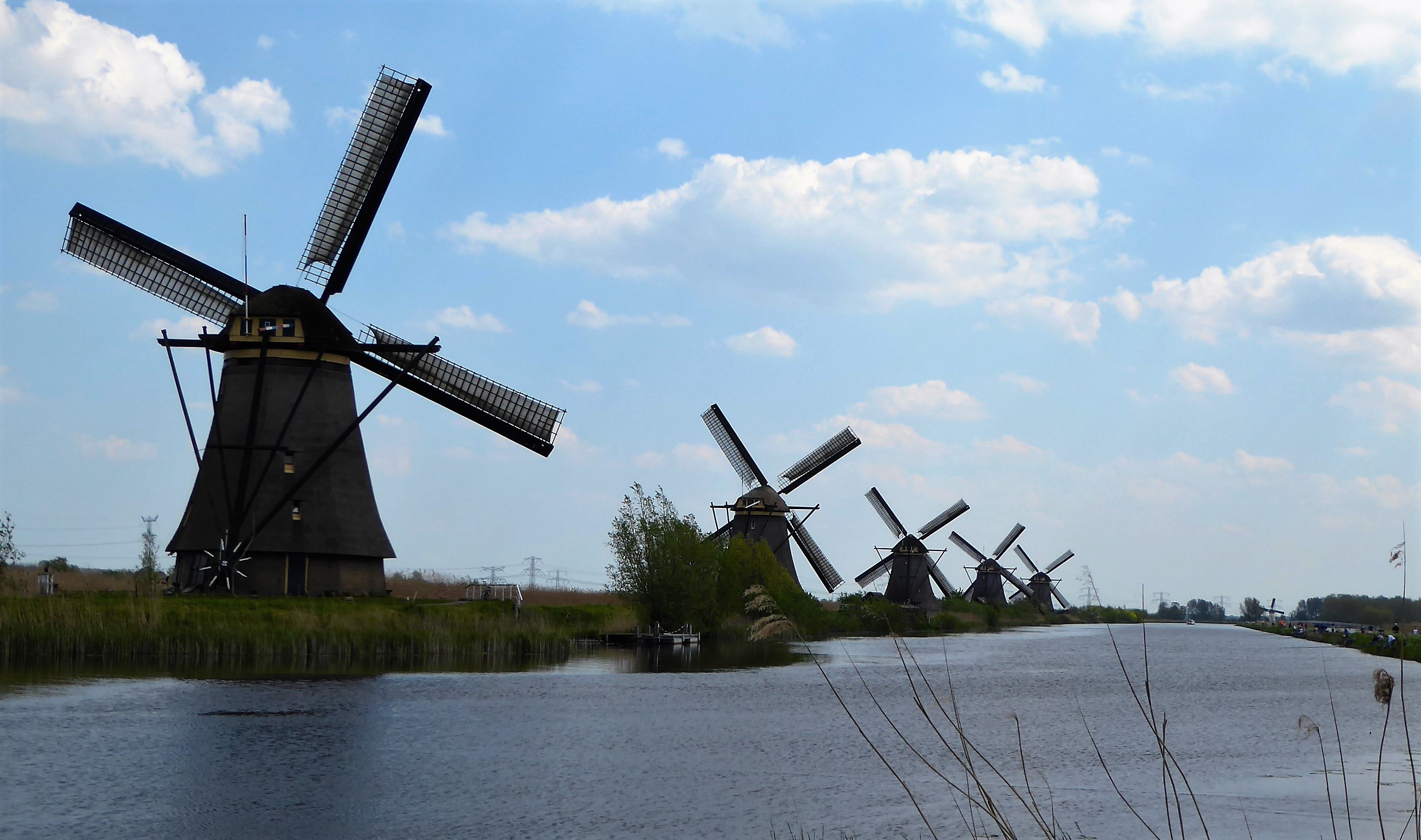 I read that the mills are build to pump the water from the lower polders up into the higher waters. The mills can pump the water up to 1.40 meter higher in to the next waters. So it defenitely had a function in those days. In this small place are about 19 mills situated. Around the village of Kinderdijk were two rivers that flowed parallel and on that part the mills are pumping the water from the one to the other. 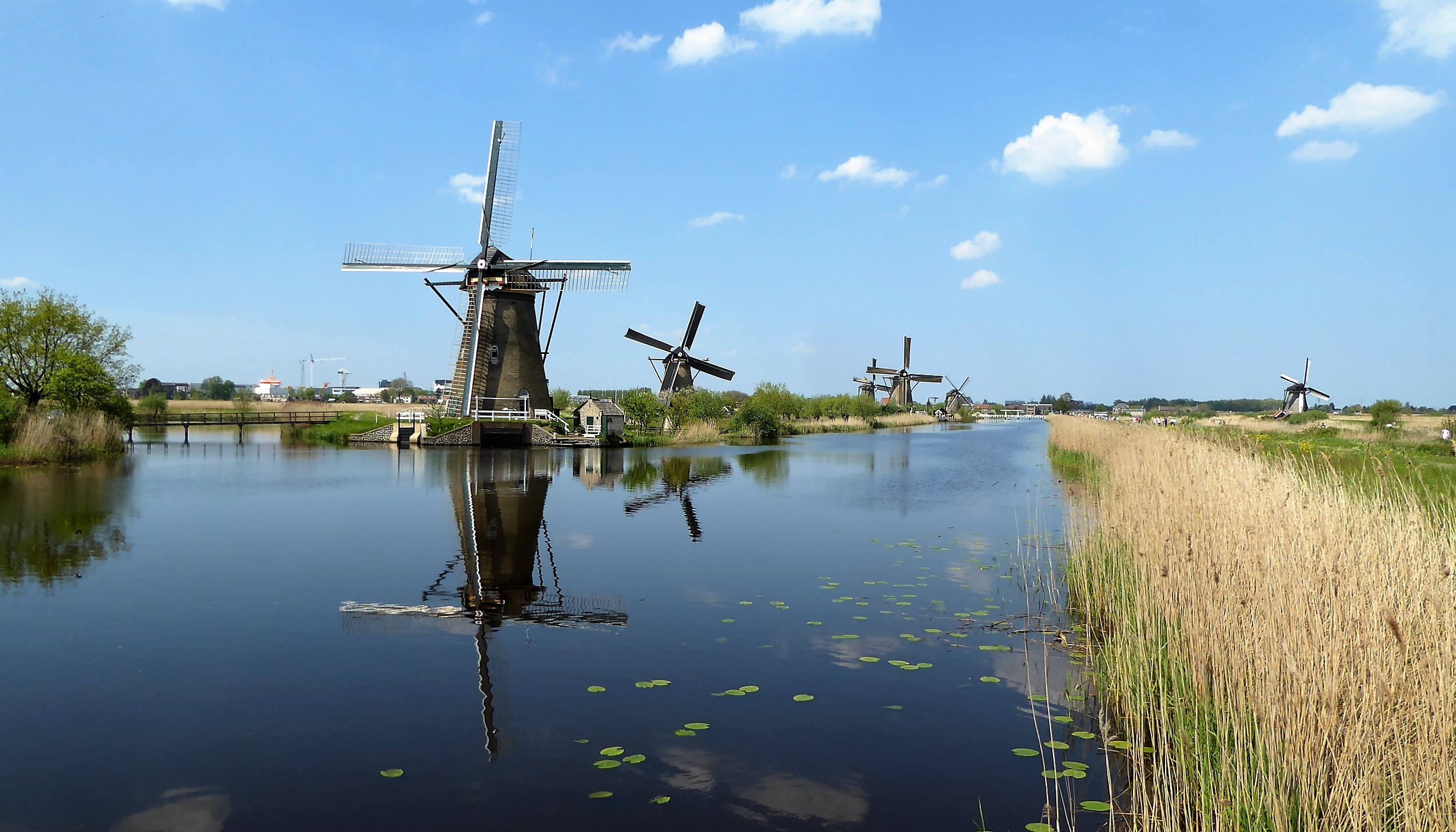 Well, I’m very happy with how they managed the water in those days. I think maybe the citizins in the village of Kinderdijk not that much…all the time.. Their little village is run over by the hundreds of tourists every day from all over the world! I stumpled upon the sign on the highway when I came back from Bruges, Belgium and Willemstad in North Brabant, Holland. The last one is also a small village, starshaped, and wonderful and very touristic!! And then I saw that sign: Kinderdijk! I just had to take the exit!! 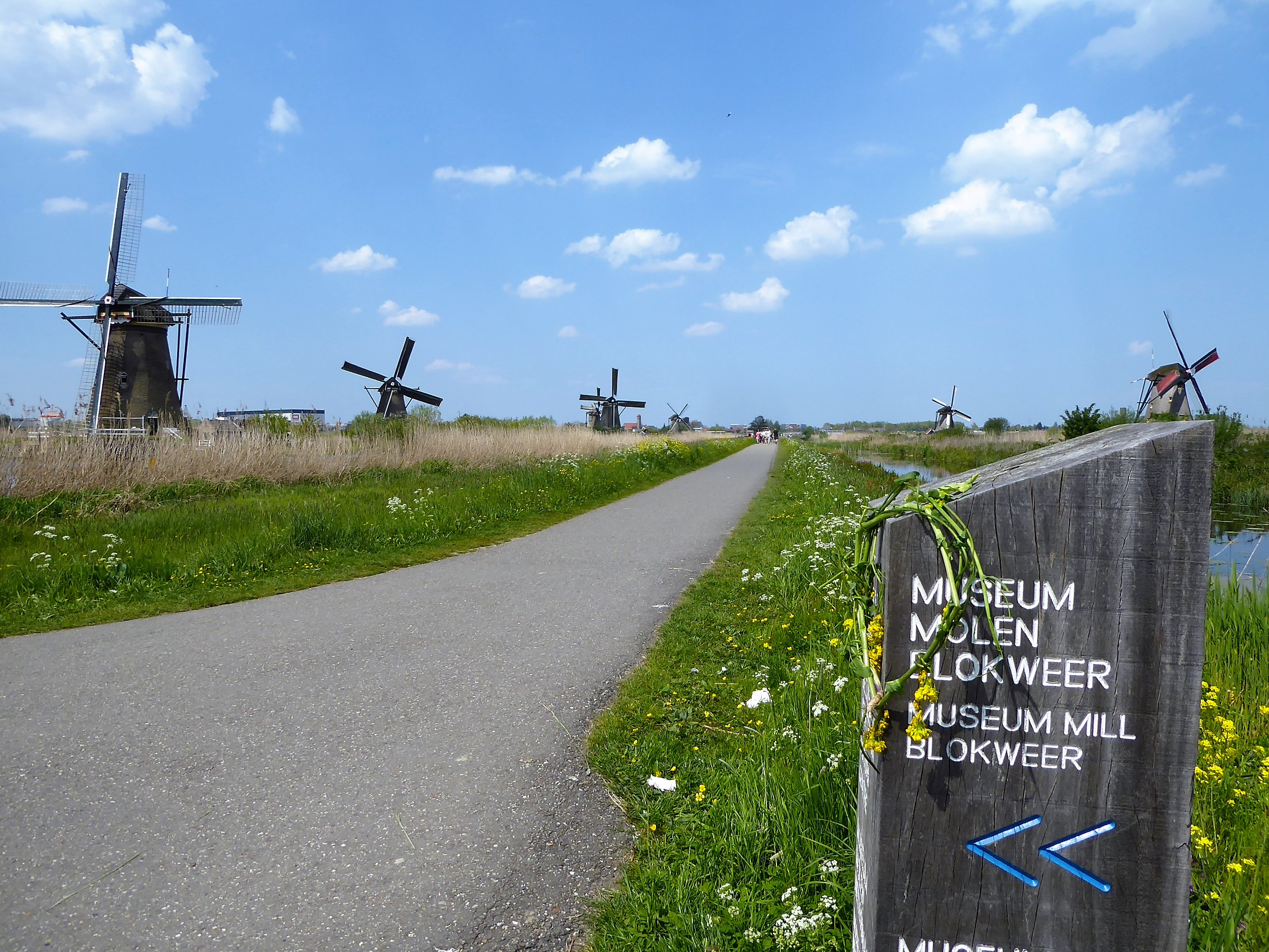 How does Kinderdijk got his name?

There are more then one stories about this but the one I was told is about a Child. An acquaintance I met in Malaysia when I did some volunteering lives near Rotterdam and so also near Kinderdijk. She told me that they learned about the story of Kinderdijk when they were little at school. The story was that someone had seen a cradle in the water. This was at the time the big st. Elisabeth flood had flooded the land. They saw it floating and they didn’t had any hope that the child that had been in there was still alive. But when it got closer trhey also saw a cat. The cat was walking back and forward to keep the balance of the cradle so it didn’t got water in it. When they finally got a hold of the cradle and got it out of the water they were surprised to see a baby peacefully sleeping. The baby was still dry inside the cradle. 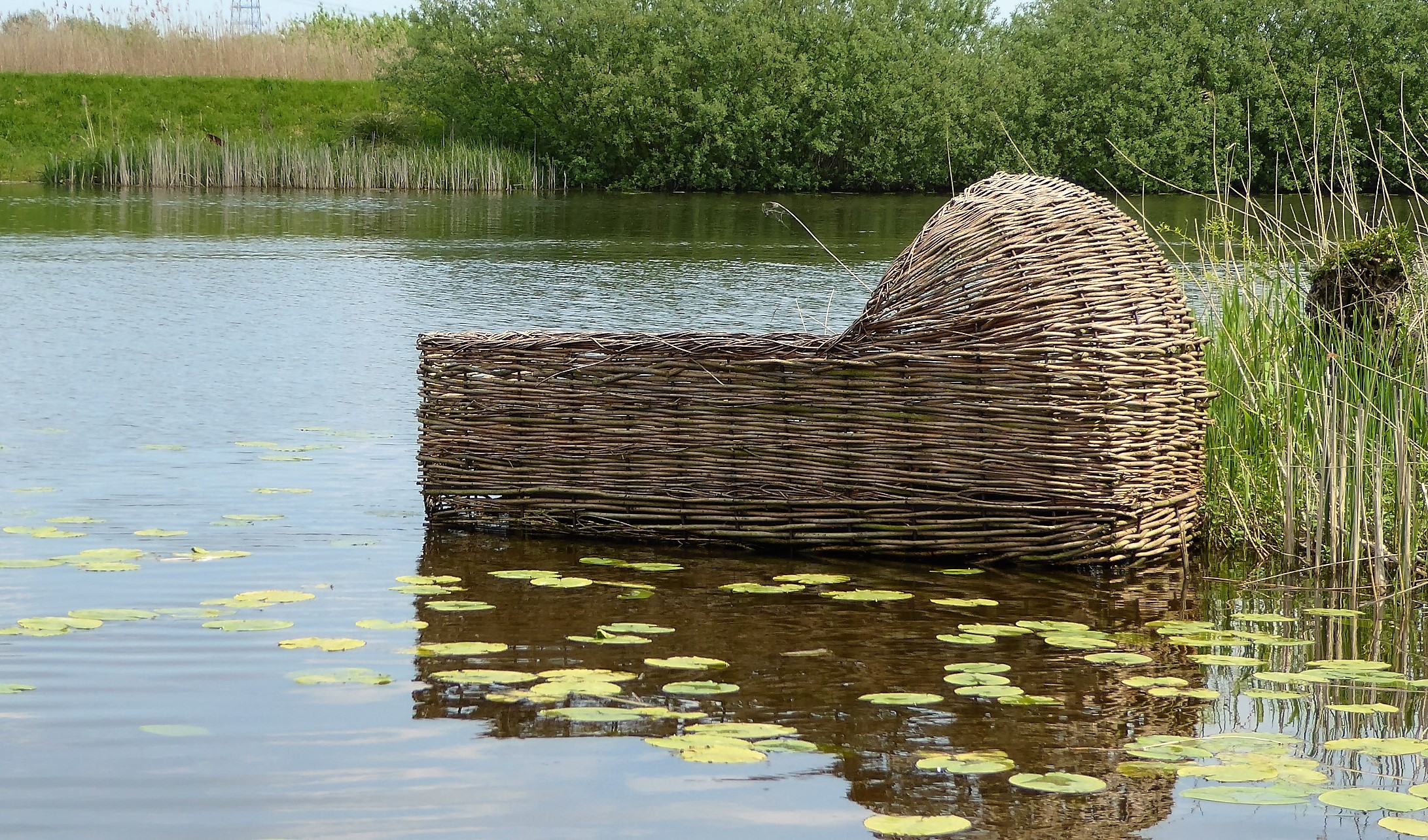 Other stories are about child  labour, a family with a lot of children or that this dike was to small and low and for that reason got the nickname of being the child amongst dikes. 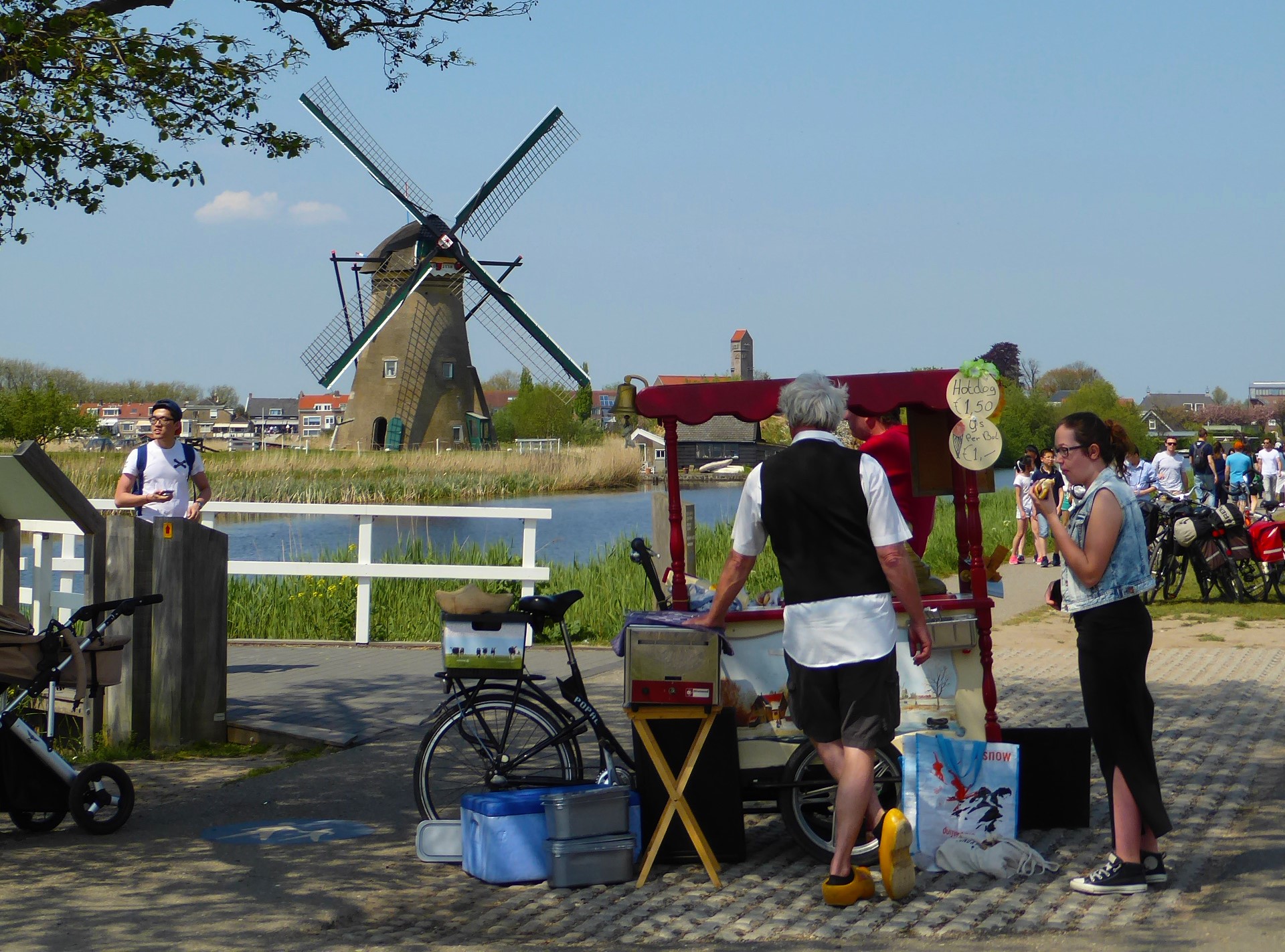 And ofcourse you can get a nice icecream on the dike in between the two rivers.

Entrance and costs
Entrance to this great area is free. There is an entrance but I could just pass that. You can buy some cards and other touristic stuff to buy.
Also to buy a ticket for the boat that will give you another perspective on those great millls when you pass them by boat.
I cycled as I had my cycle with me, it was on the back of my dad’s camper!! Just on of those benefits when you travel with a camper!!
The weather was great and there were a lot of tourists from all over the world. I would prefer a day with less or no tourists but still I think I was lucky .. knowing how famous this place is.

It is a great are to wander around for a while. As you see it on the pictures when you google the place….it was in real too!! Sometimes things aren’t as good as they were when you started to look for it..but yes!! Kinderdijk is really as beautiful as the postcards!! 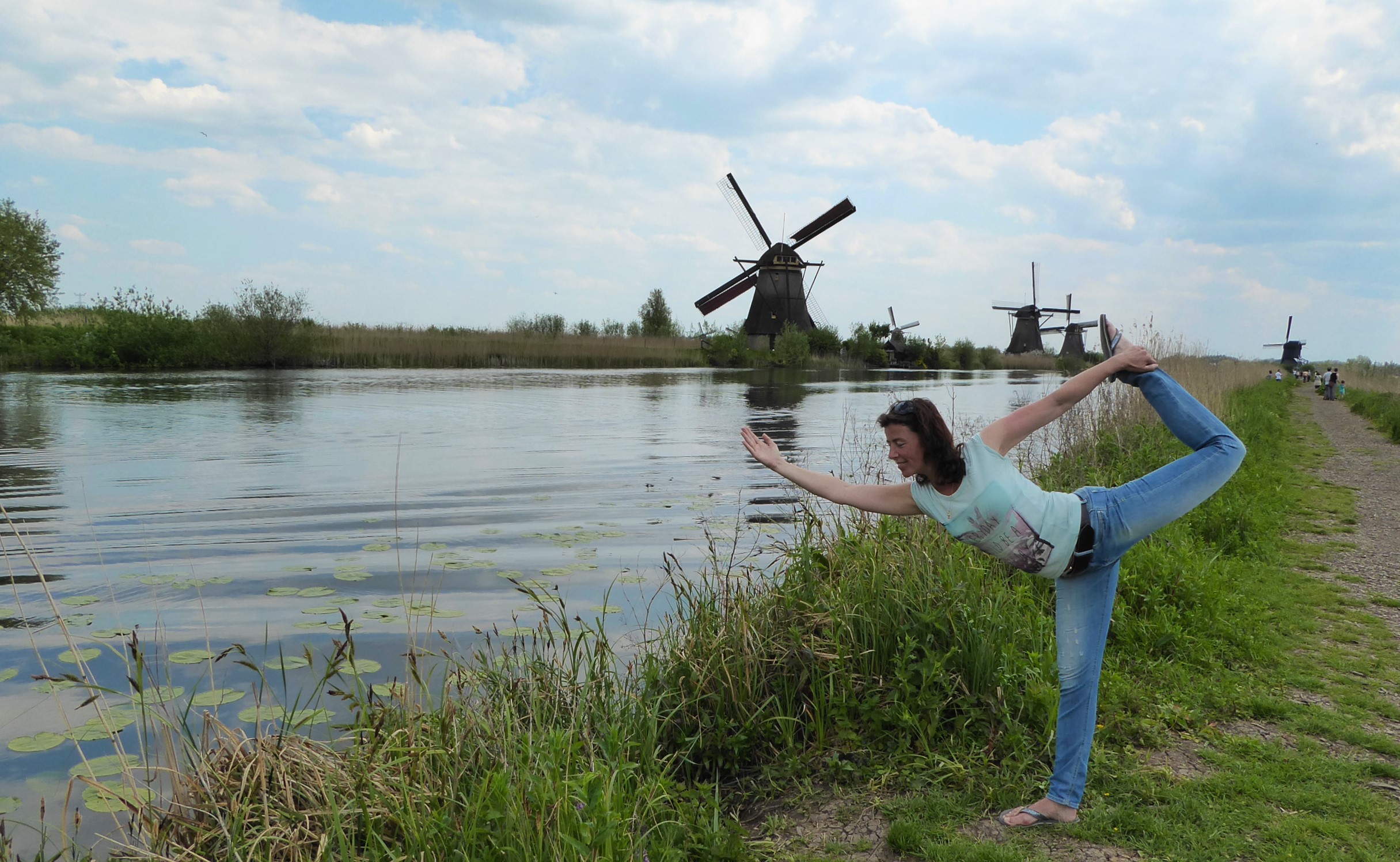 Oh yes…ofcourse I did a Yoga pose here too 😉

They created a path for cyclists and one for walking. After a while they go together but it was less busy at that point. There was a brigde and another path walking at that point. I could’ve wandered around the area for at least another hour. I cycled along the river, crossed the brigde and went on after that part for a while. I walked the best part back in between the two rivers. I really loved it! When you have the whole afternoon you really should walk further and take it for some K’s! Just to get a feeling of that typical Dutch landscape!

If you thought this was interesting or you liked the Dutch pictures..

Do you want to read more about The Netherlands?

Three Ideas for Walking in Deventer

Intertidal Walk through the Waddensea

The Famous Village of Volendam

Or visit my Netherlands Page