Use a bicycle!!
The ultimate way of being in Holland is to cycle ofcourse!

The city has on almost every road a lane for bicycles, it is safe and the fastest way to go around the city. And you can get of your bicycle where ever you want and explore the area how long you want or need.

So that is what I did last week. I went to Amsterdam with the public transport and rented a bicycle. There are many shops to do so. I saw a couple of shops called Mac Bike   You can easily rent a bike and get a map to go around the city and see the highlights in an afternoon. 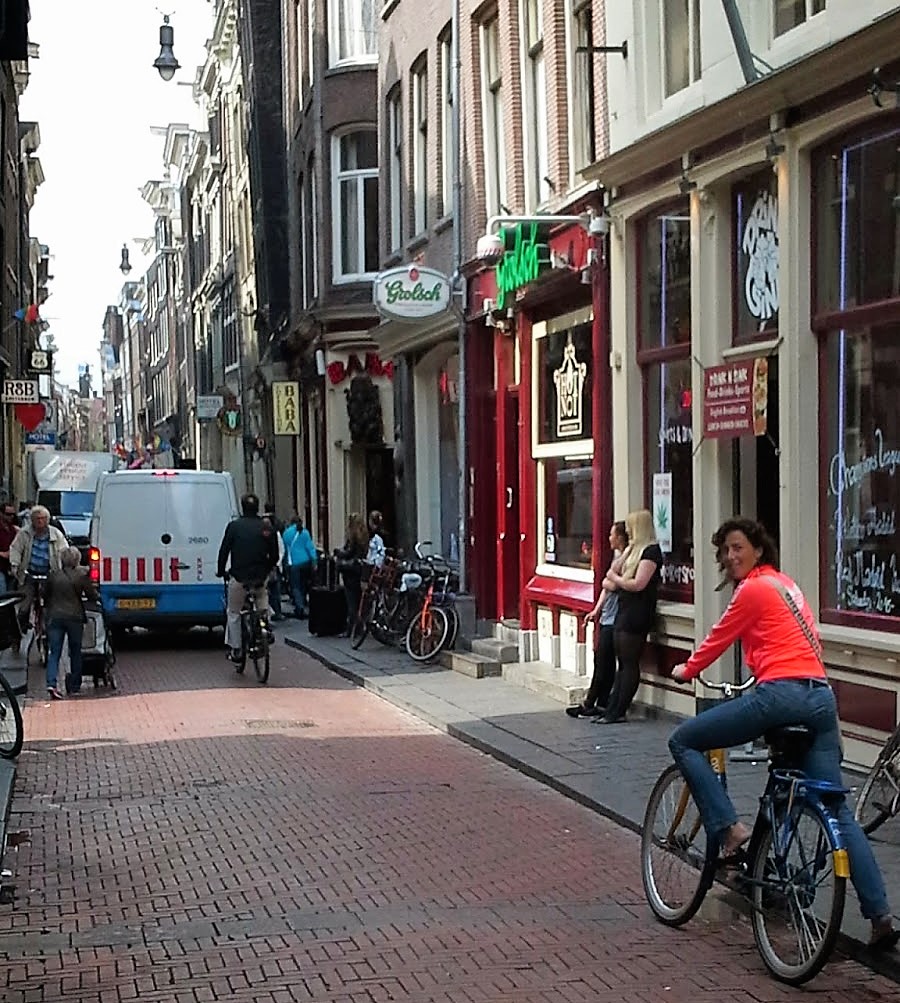 I started around the ‘Centraal Station’ or Amsterdam CS, the railway station, from there I went to ‘De Dam’. That is the main square of Amsterdam Centre, the Royal Palace is also situated on this square. The statue on this square is a remembrance on WWII. Every year there is a remembrance and the Queen or from now on the King will be there to honour and remember the victims of WWII. When we went on we passed the house of Rembrandt, it is a museum now to visit. 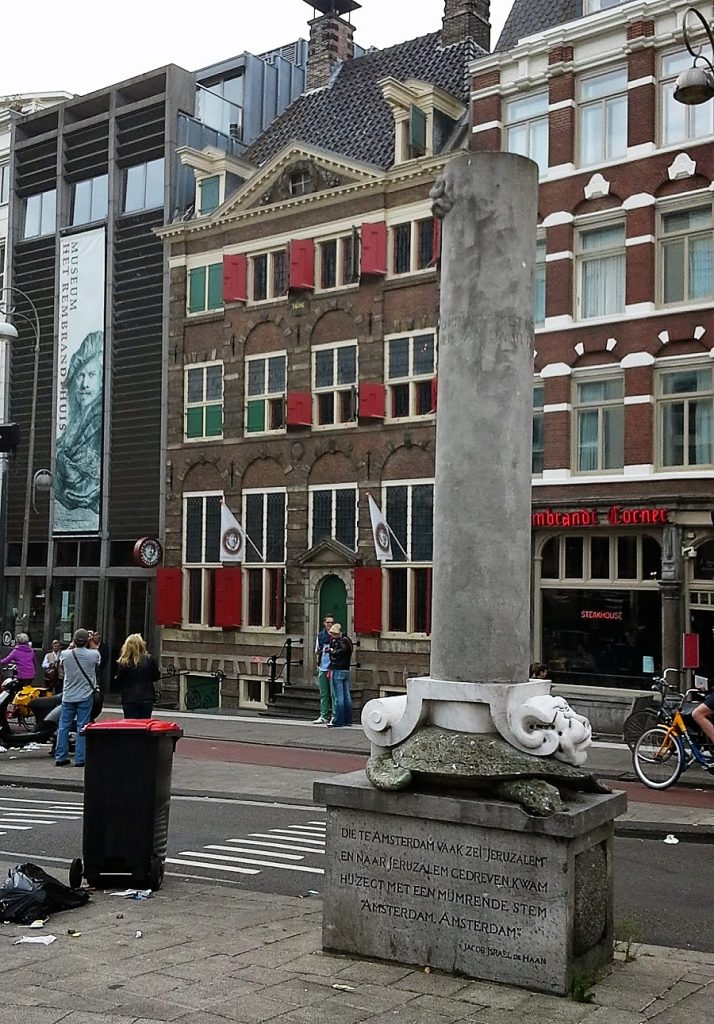 We also passed a market ‘Nieuwmarkt‘ , with on the background the  great building of ‘De Waag’
The Waag (“weigh house”) is a 15th-century building, it was originally a city gate and part of the walls of Amsterdam. 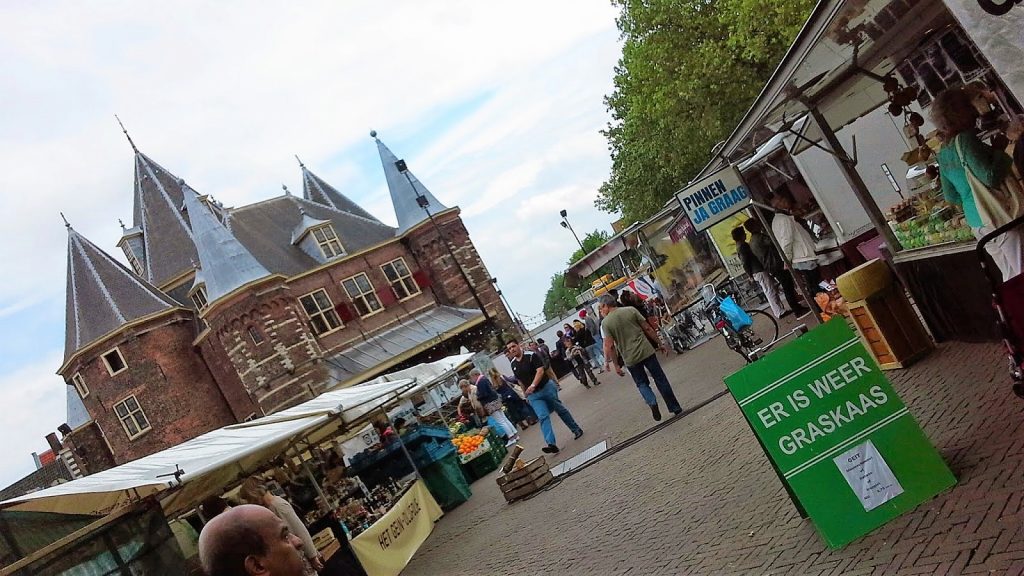 The sign on the market you see says there are cheeses to buy, cheeses made from grass 🙂

We biked around some suburb areas and saw some nice canals. When you say Amsterdam you automatically will think about water and canals running through the city. Gives it a real authentic feeling and view biking around it, and over those brigdes. 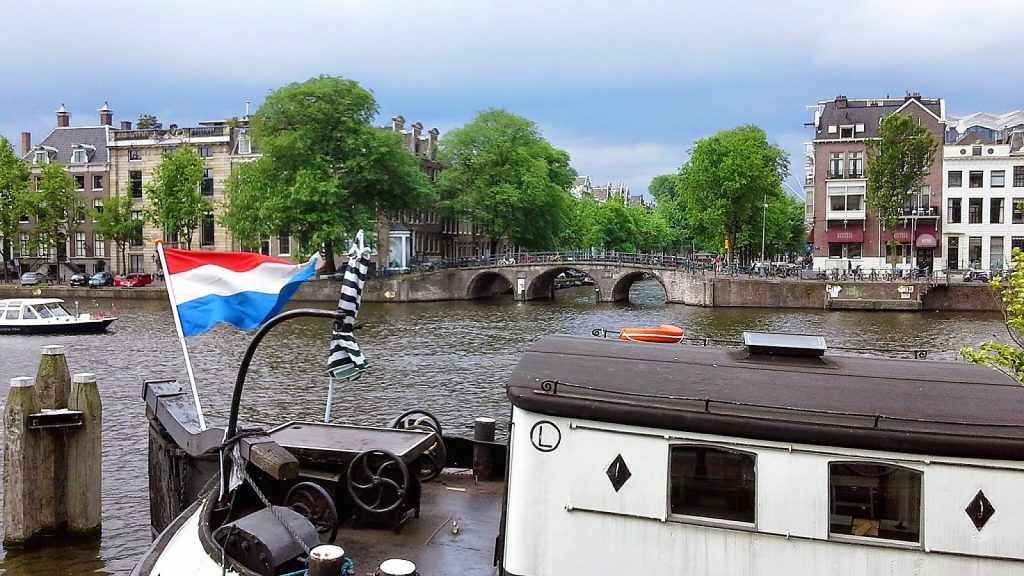 Want to read some fun facts about Amsterdam? 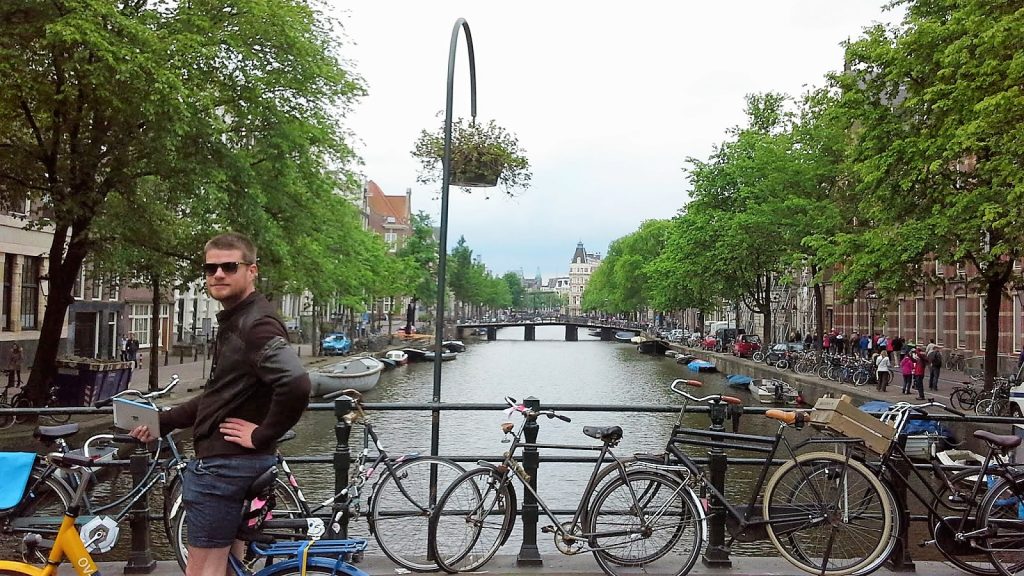 Some of those have a typical story. Like this one. 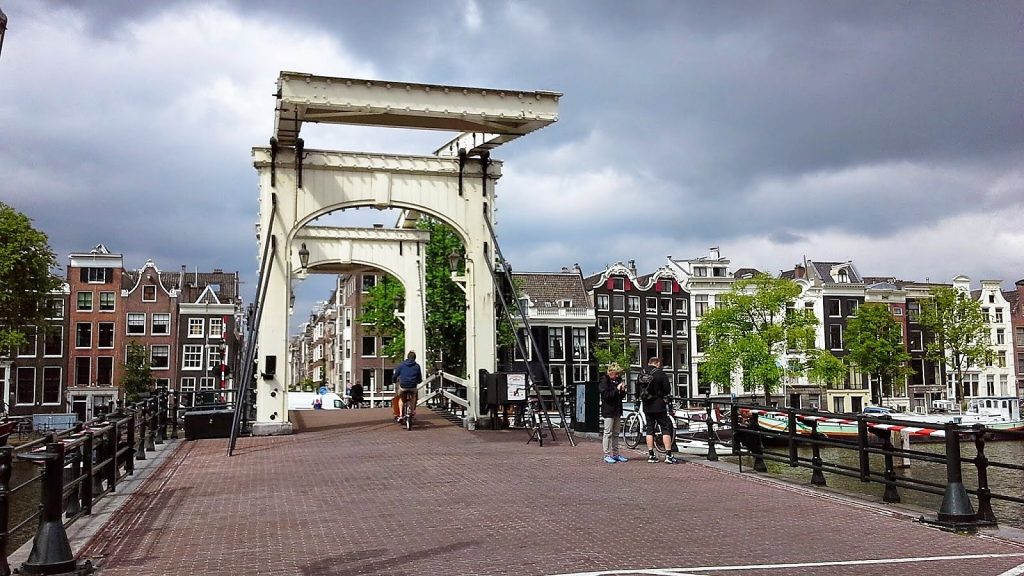 It is called ‘Magere brug’ translated as skinny brigde. Tradition relates that the bridge was named after the sisters Mager, who were supposed to live on opposite sides of the river. They are said to have had the wooden bridge built to make it easier to visit one another. However it appears more likely, that the original bridge acquired the name from being so narrow (mager means skinny in Dutch), that it was hard for two pedestrians to pass one along another. 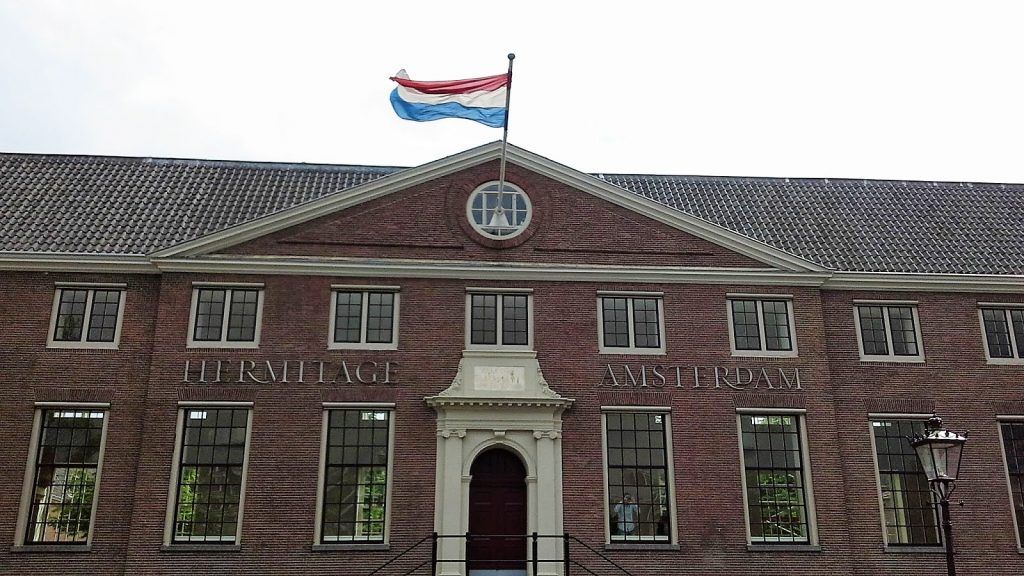 We also came by the ‘Rijksmuseum‘ or in English The State Museum. It is located in a great old beautiful building, designed by the Dutch architect Petrus J.H. Cuypers. It has been built in the then fashionable Dutch neo-Renaissance style, using historical neo-Gothic elements in it form and decoration. 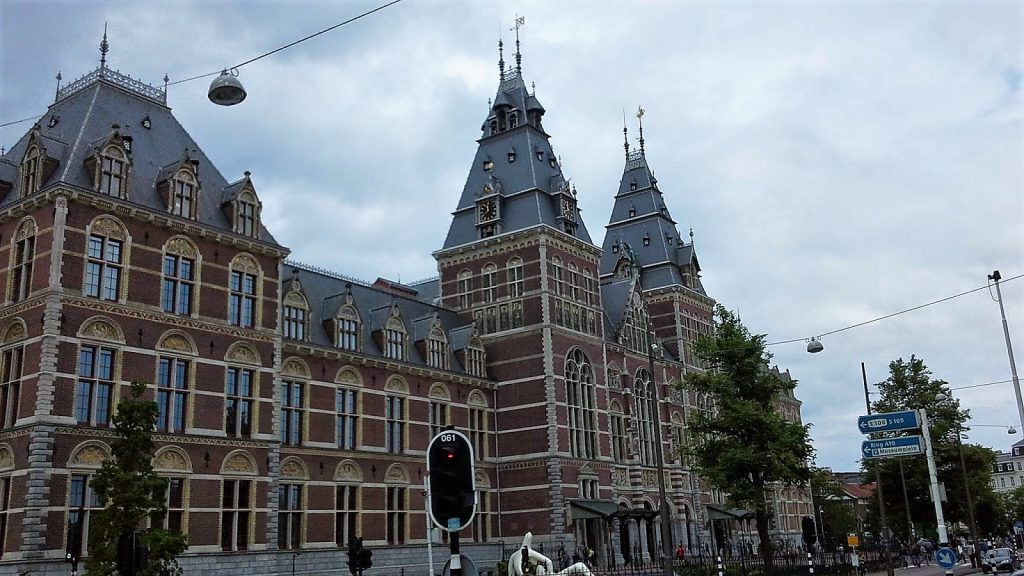 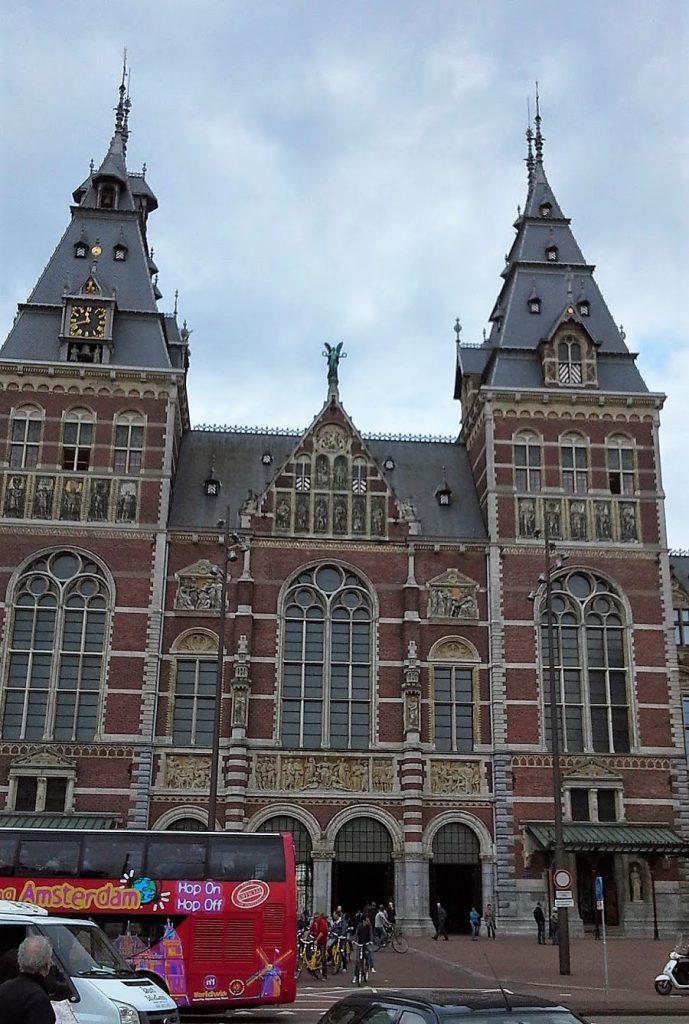 You also see the Hop on Hop off bus driving by

In a park behind the Rijksmuseum you could take a break and recharge your celphone 🙂 Well, there was only one plug left to charge unfortunately the rest was cut off 🙁 but it did work! 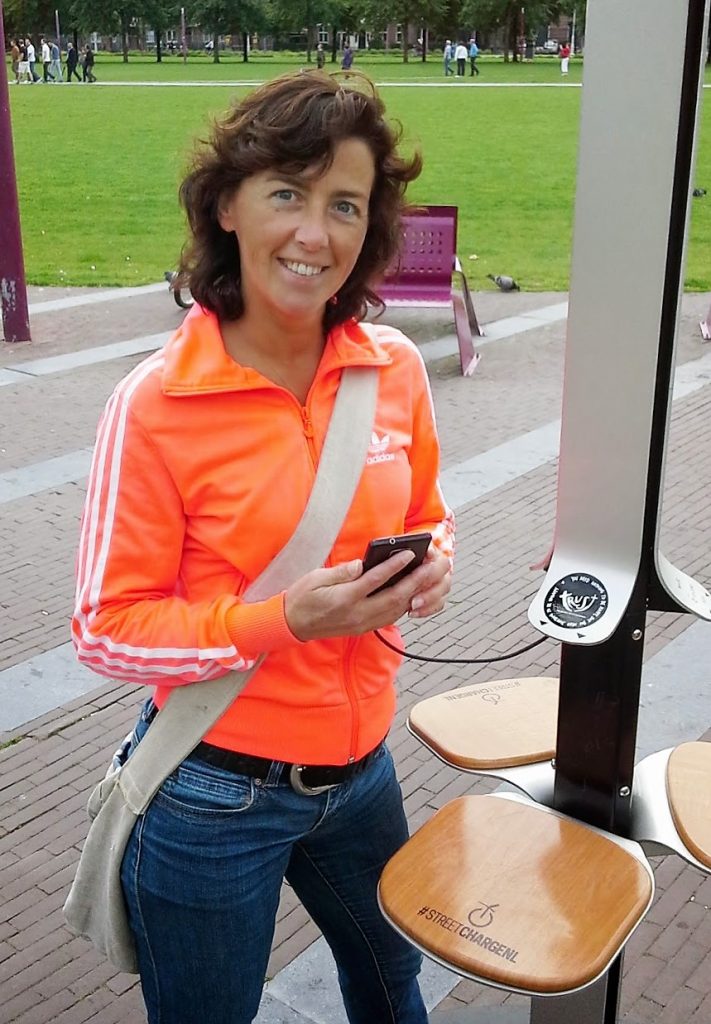 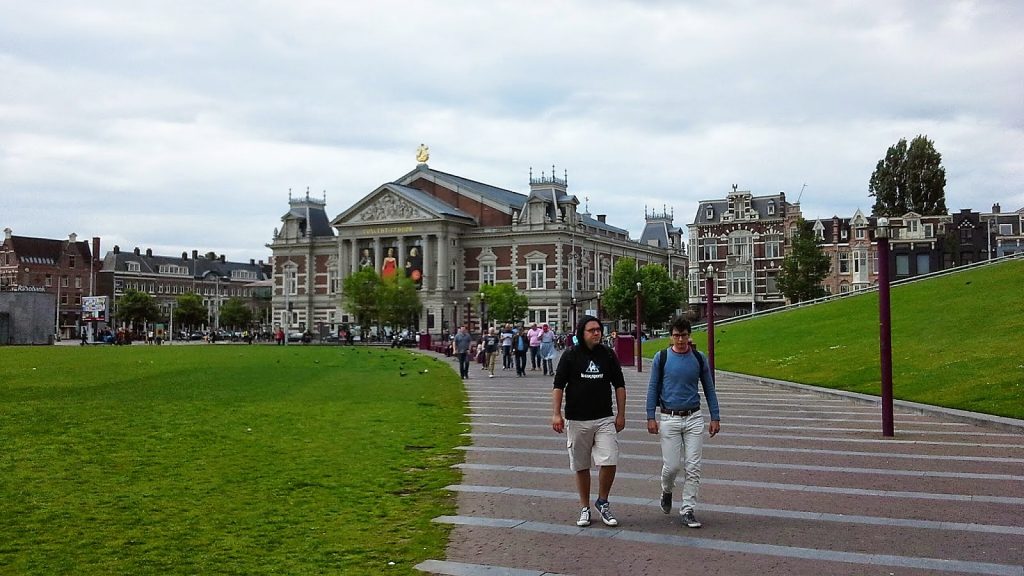 Park behind the Rijksmuseum

We had some lunch in the Vondel park. That’s a great park in the middle of the city. Great for some relaxing time, sitting on the grass looking at all the activity coming by. 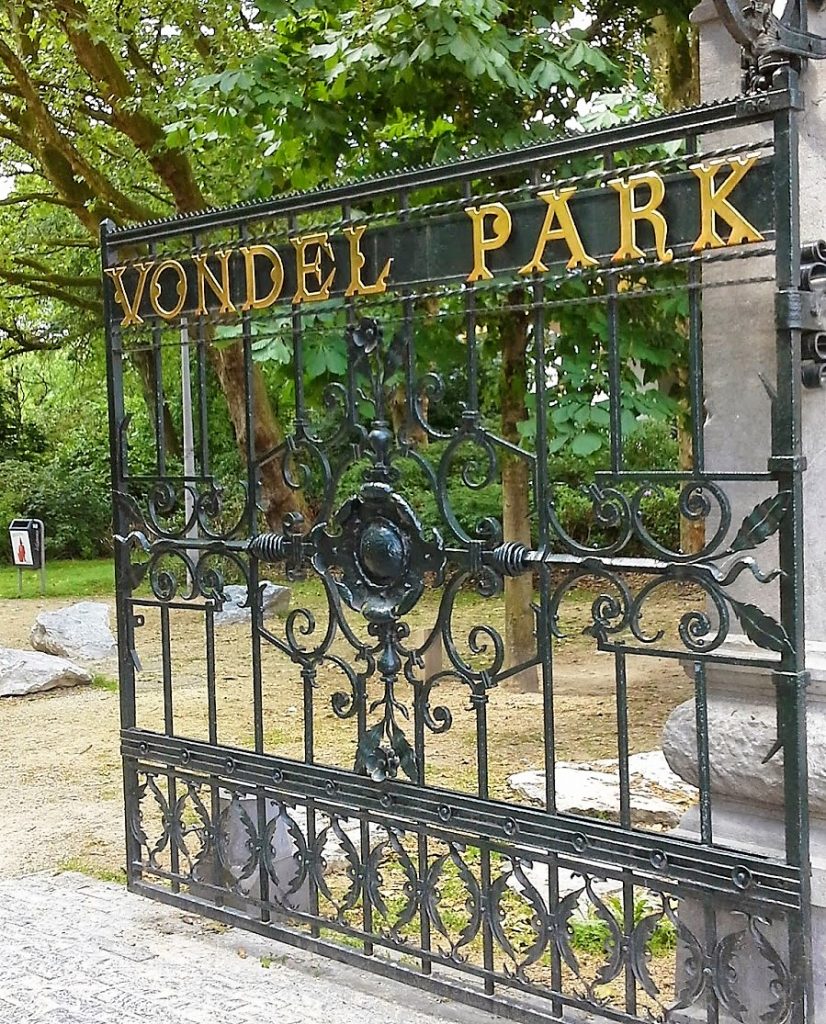 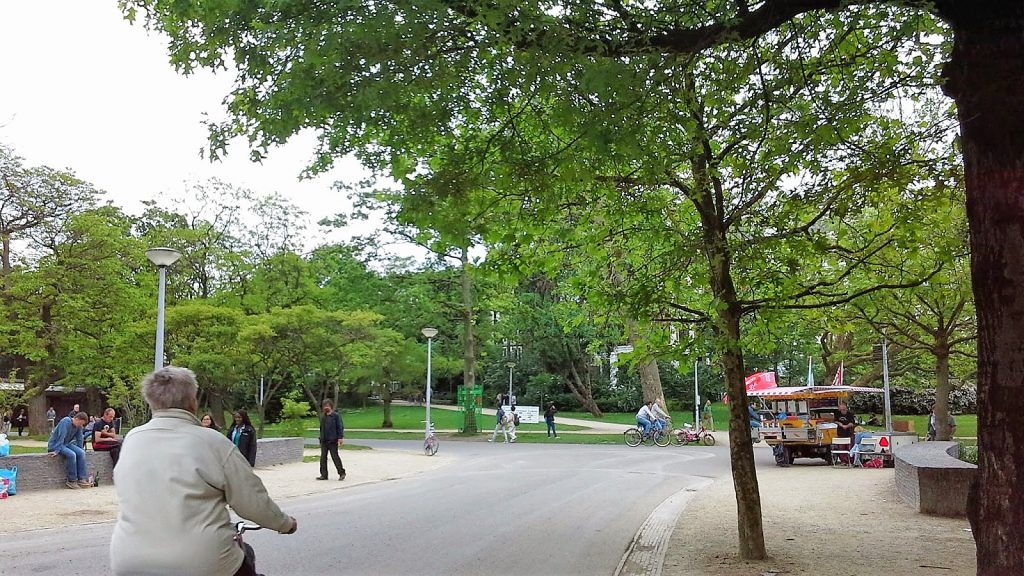 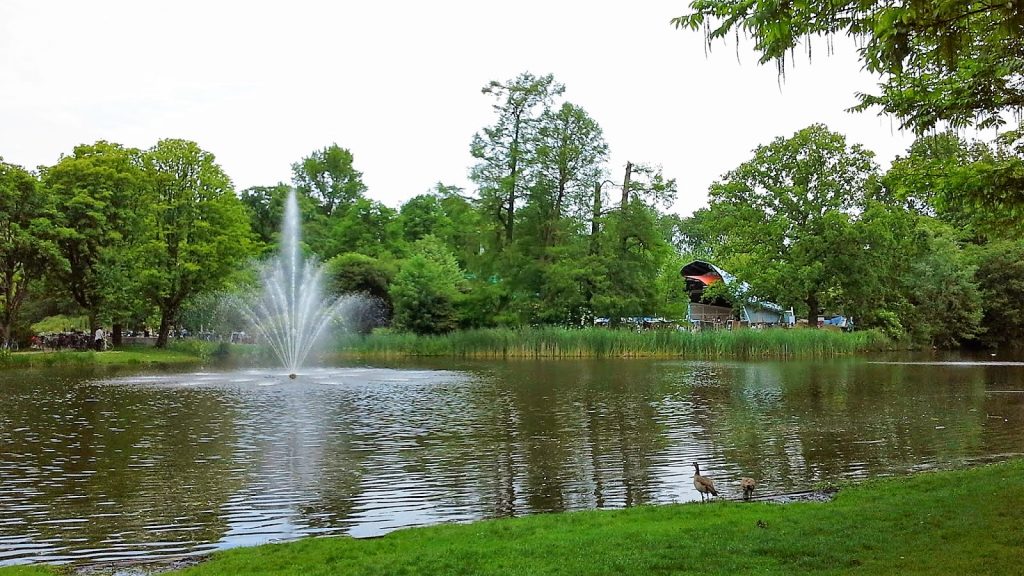 Statue of Johnny Jordaan
This is undoubtedly the most sung about, described and romanched town district of The Netherlands. Started as a district for the poor, today it  s a favorite place for students, artists and young proffesionals. The IJ
After biking a long time in the famous part of Amsterdam we took the ferry to the other side of the IJ, that’s how the lake is called behind the railway station. You can take the ferry for free. Every couple of minutes one will leave.
We went to an old industrial part of the city called the NDSM werf (wharf). Website is partially in English. Nowadays it is used as a place where artists have their ‘office’ and where students can live. The municipality has placed rows of containers and put them on top of eachother and rent them as rooms for students. Explore Amsterdam from the water too 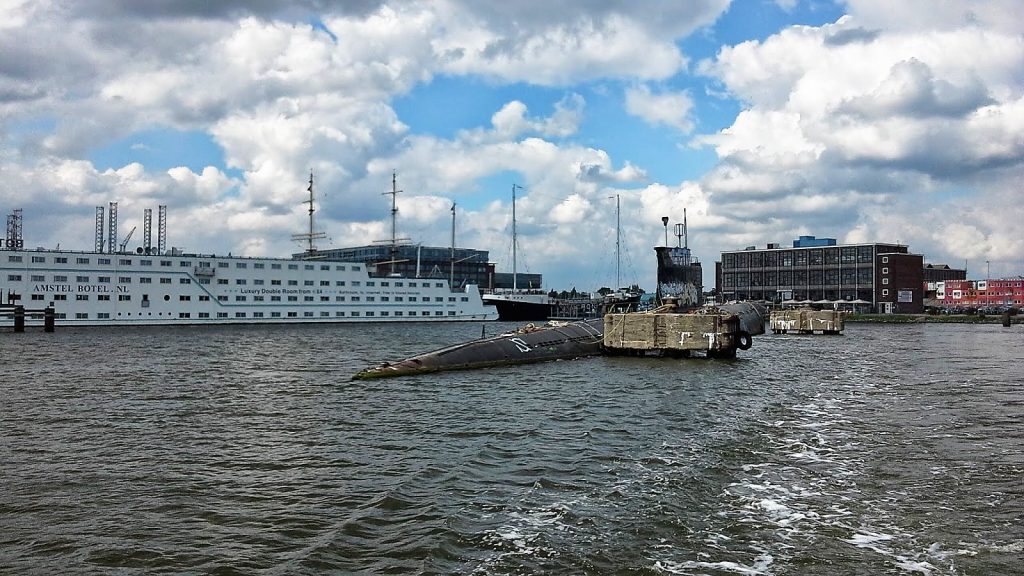 We had something to drink at ‘Noorderlicht‘. It was a really nice ‘back to basic’ place. Really liked that, they don’t serve sprite but did had lemon juice. The bottle was great and on the menu it explained why they had choosen that one. All because of health, I like that concept really much! In the background you see the Feralda NDSM crane 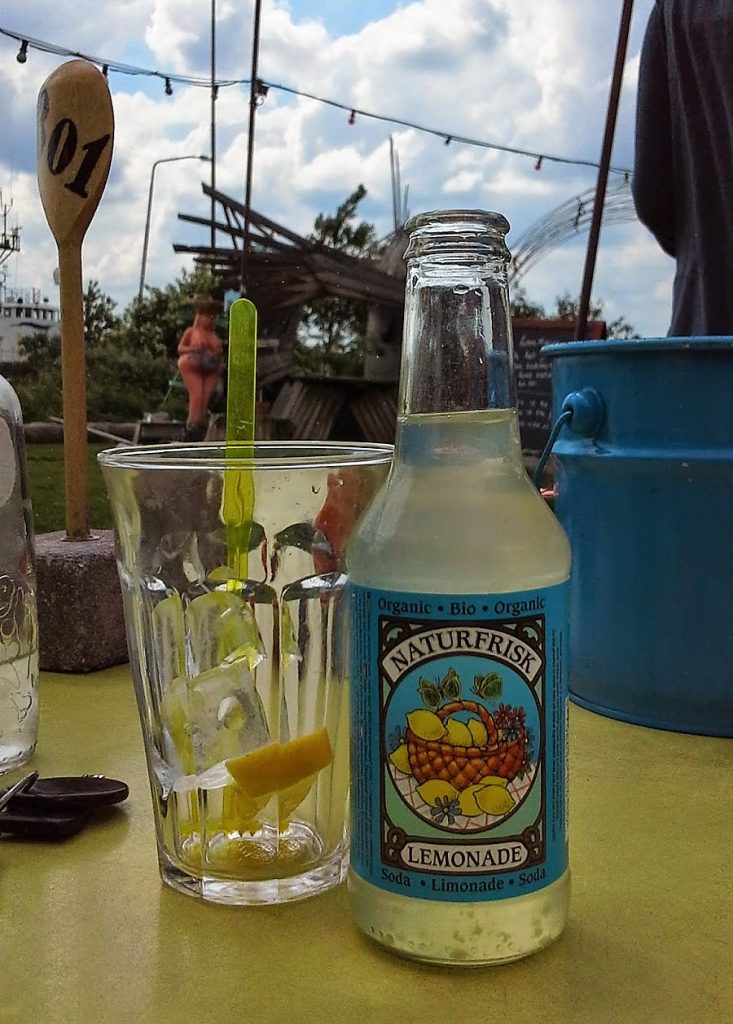 In front of Noorderlicht there is a very typical hotel. It is located in a crane, very unique! You will have a great view over Amsterdam!

Back to Central Station

After that we went back with the ferry and were in no time back at the railway station Central. At the station you can return your rented bikes and just walk into the best shoppingstreet of Amsterdam, the Nieuwendijk. Explore Amsterdam some more! That street will go to the Dam and when you cross that square you enter the Kalverstraat, another shoppingstreet 🙂 And ofcourse on the other side of the Dam you can go to the red district…I will highlight that another time 😉 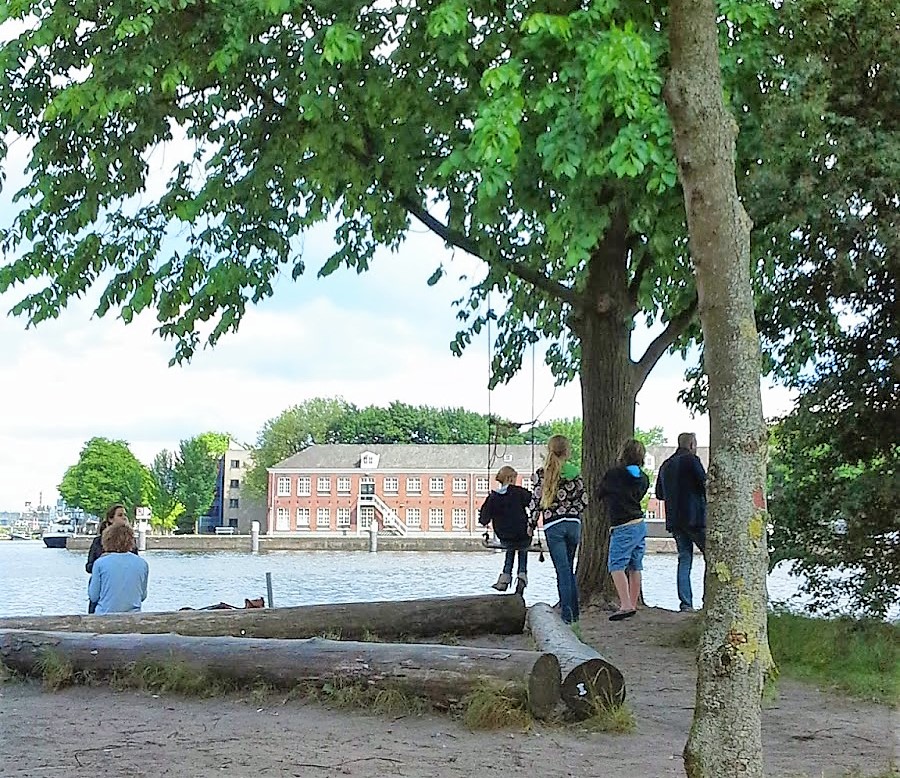 End your afternoon at Cafe Hanneke’s boom (Tree of Hanneke)

If you don’t know the Dutch that good try reading this post!!

10 Things you NEED to Know About The Netherlands Visit the Starshaped Fortresses of The Netherlands

A weekend Sailing in Friesland – The Netherlands

Or go Cycling some more!!

Along the great Mills of Leiden – NL