I walked the longest Malaysian suspension bridge in the world, it’s 530 m. long and around 25 to 40 m. high. You can see the rich flora and fauna of the park and hear a lot of birds and other animals. I unfortunately didn’t see any animals. I did on the nightwalk the night before, we saw all kinds of insects and small animals. 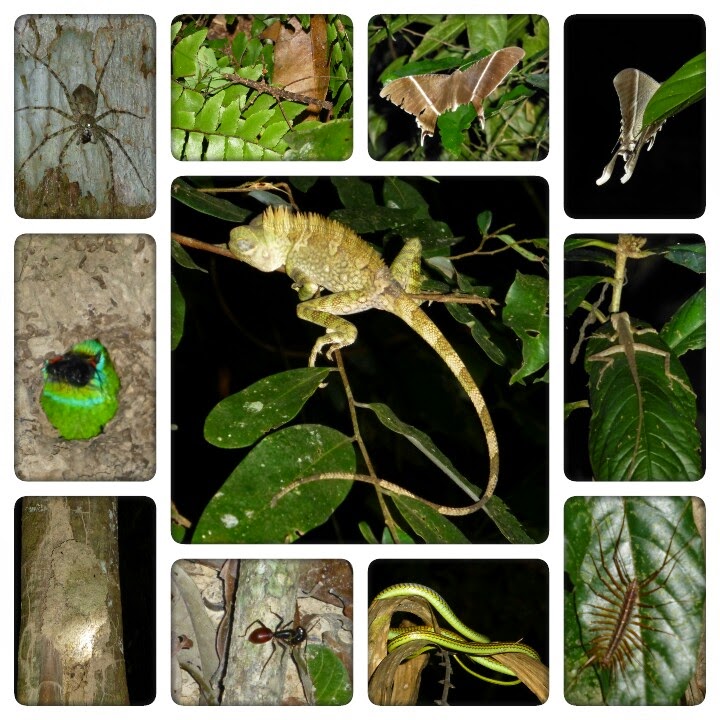 Seen on the nightwalk

We started walking the canopy in the morning. There are pieces canopy of 40 or 50 m. length. After that you will enter a tree, go around the tree and get on the other canopy to continue your walk. I really liked walking high in the trees.  It also felt really safe as there are enough trees in between and the cables were in good condition. 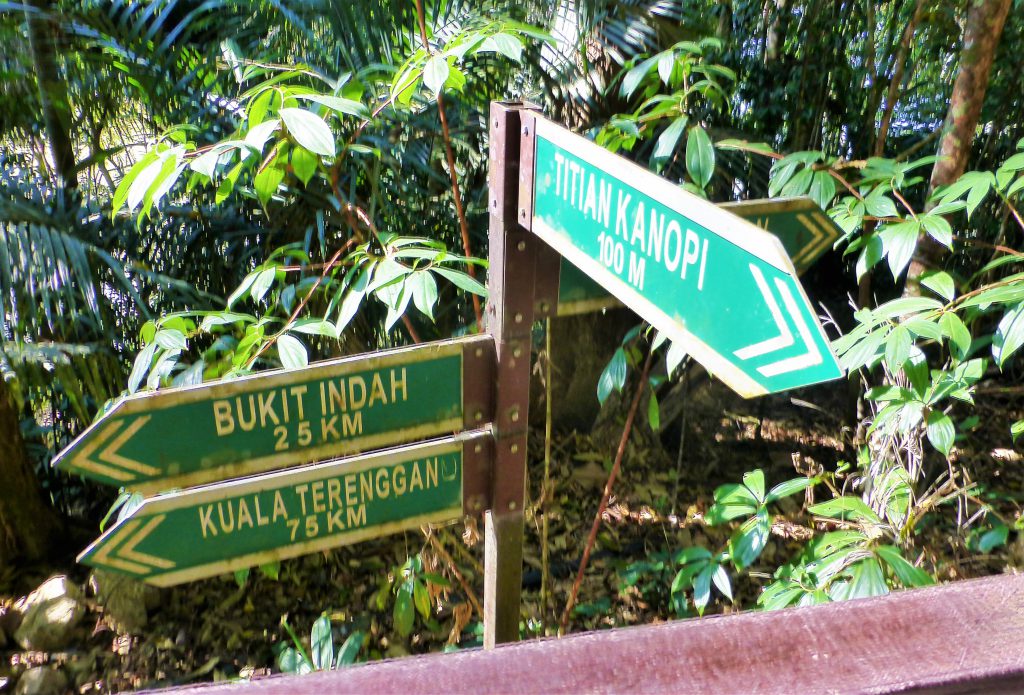 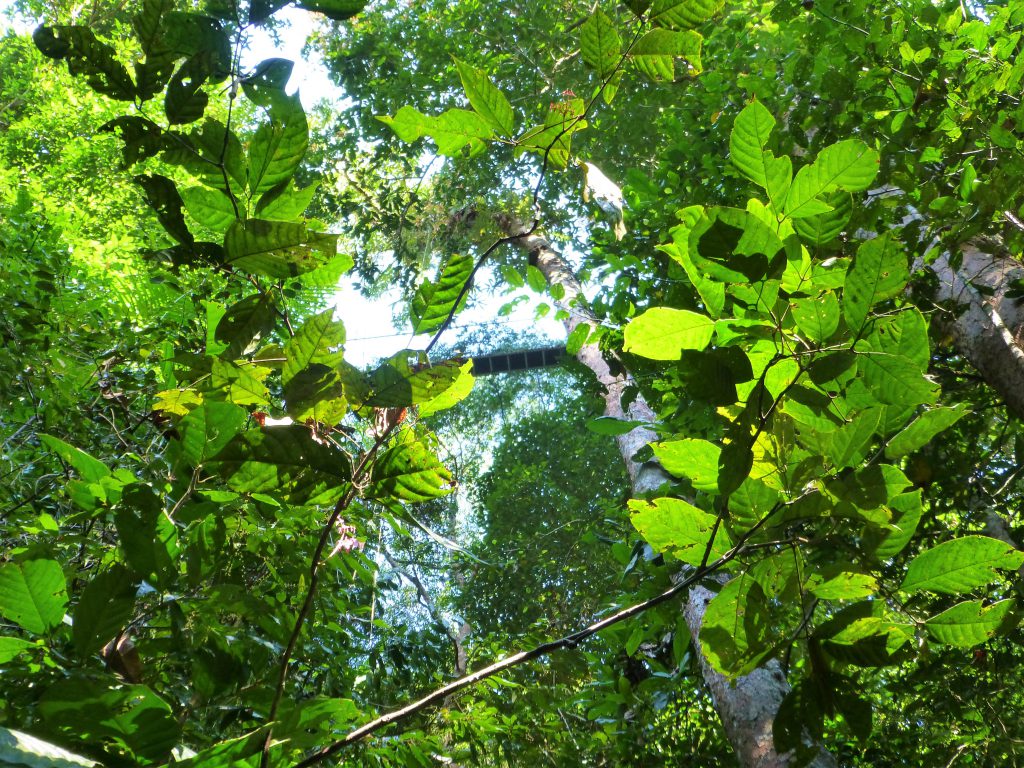 The canopy high in the jungle

Walking the Canopy deep in the Jungle 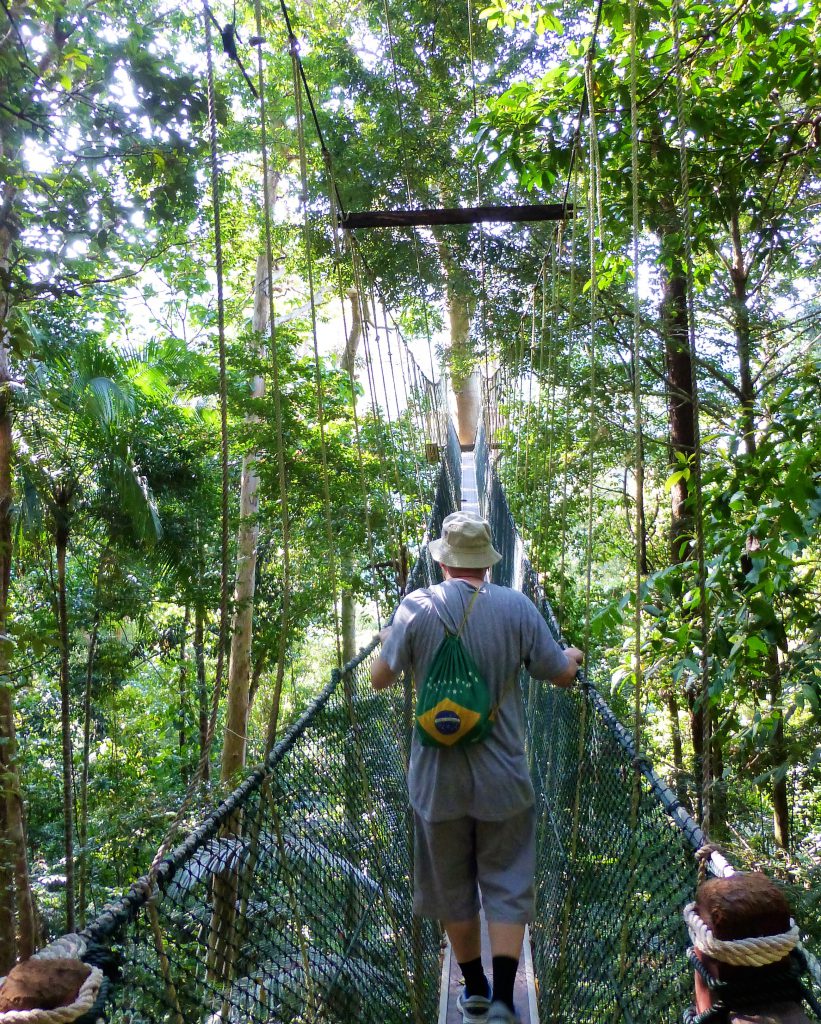 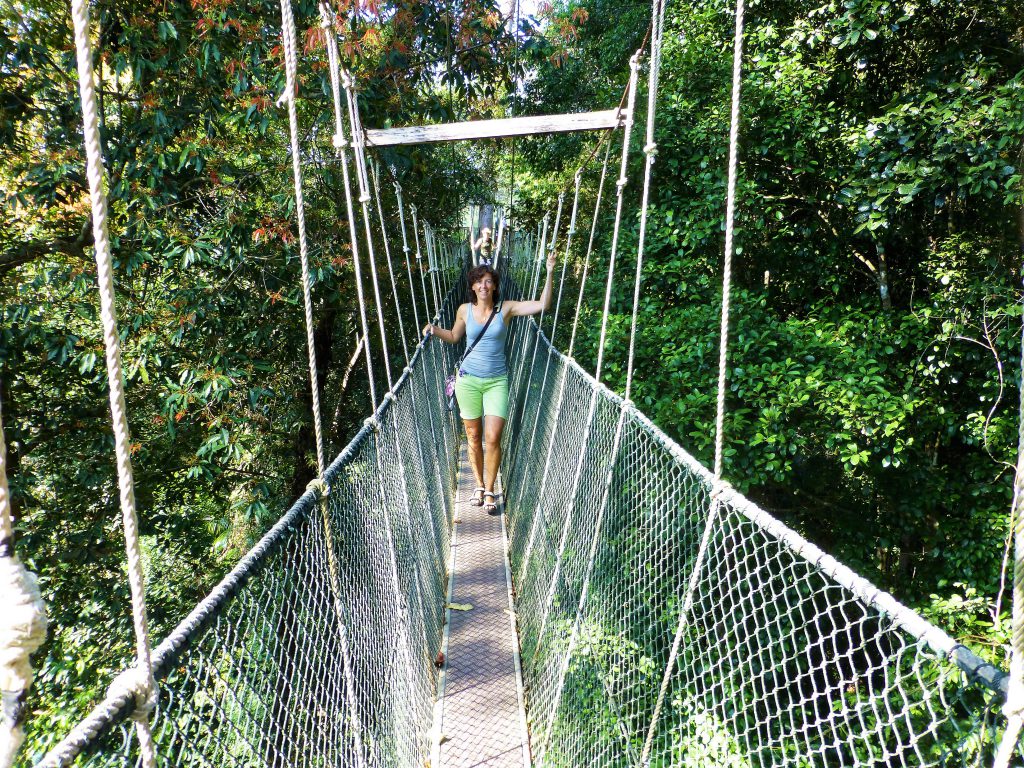 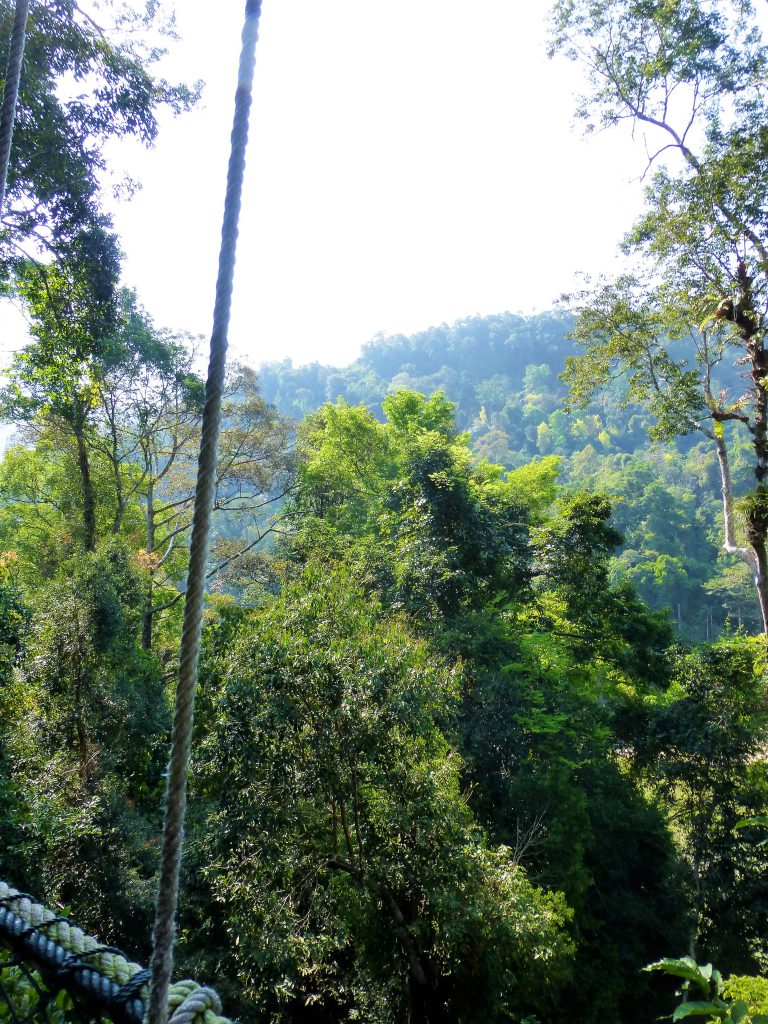 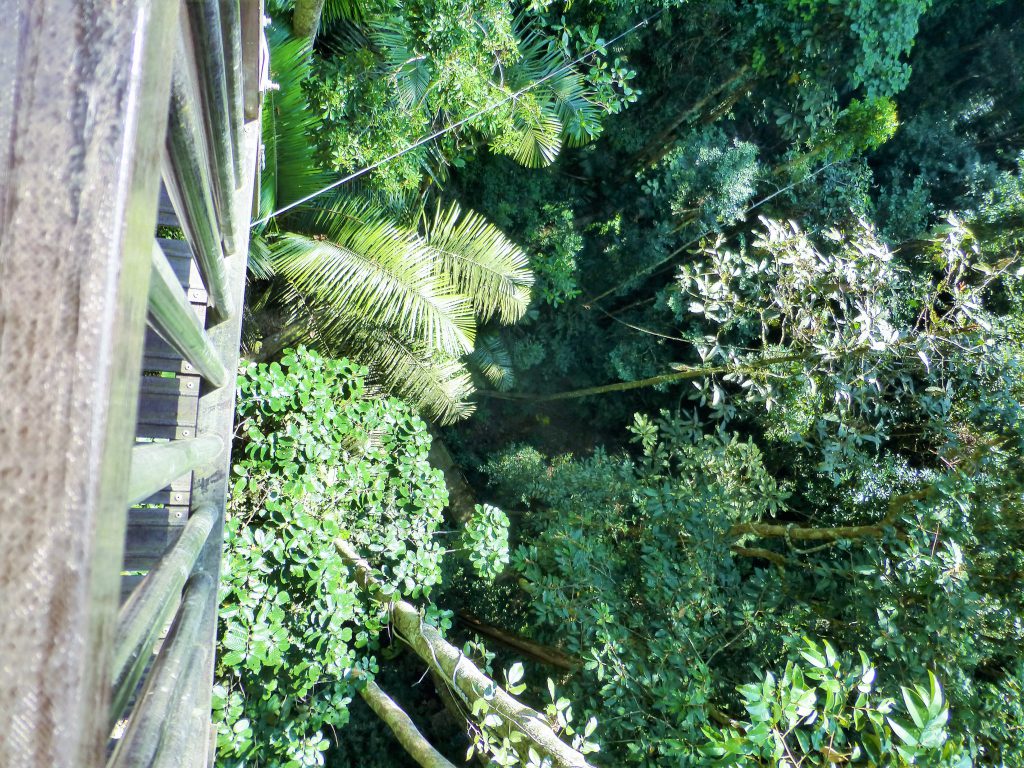 The highest parts are some 40 mtrs high. So looking down will give you some scare to it. What if it snaps? What if.. You just don’t go that way with your thoughts so you just look up again to enjoy the great views that is inherent on being that high in the jungle!! Seeing those long trees and being in the middle of it!! 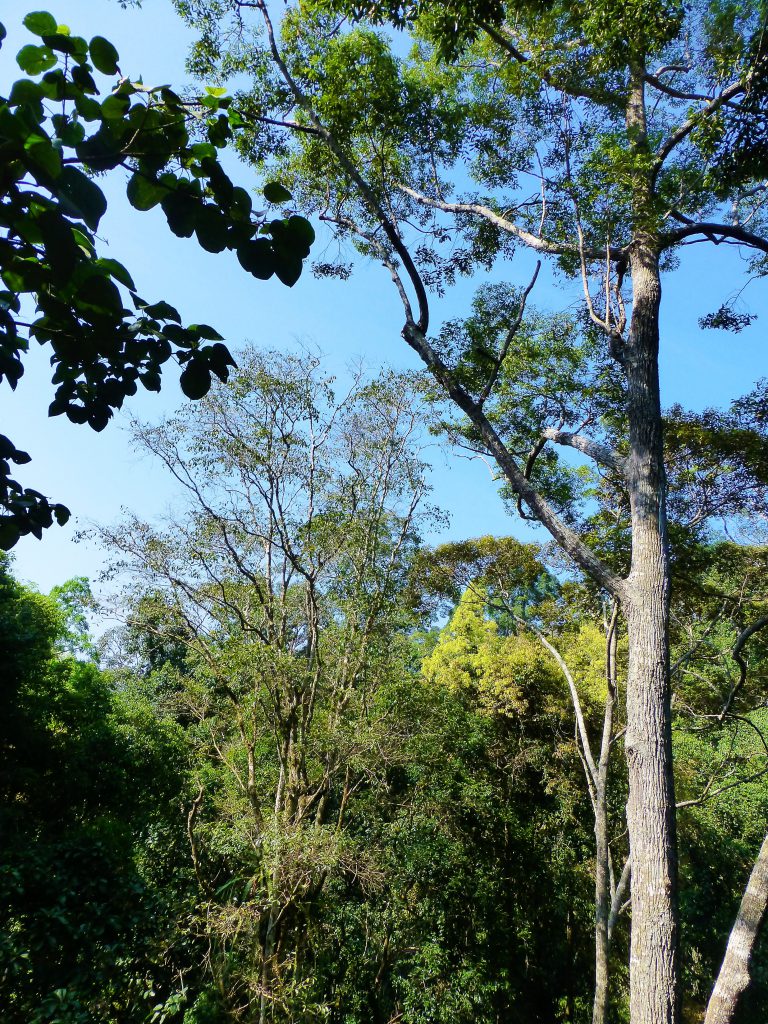 Sometimes it begins to waggle because another person is also walking the same piece but that’s oke. It is strong enough to hold up to 4 persons. The only rule there was that there has to be at least 10 m. in between eachother. Divide the weight and you’ll be oke! 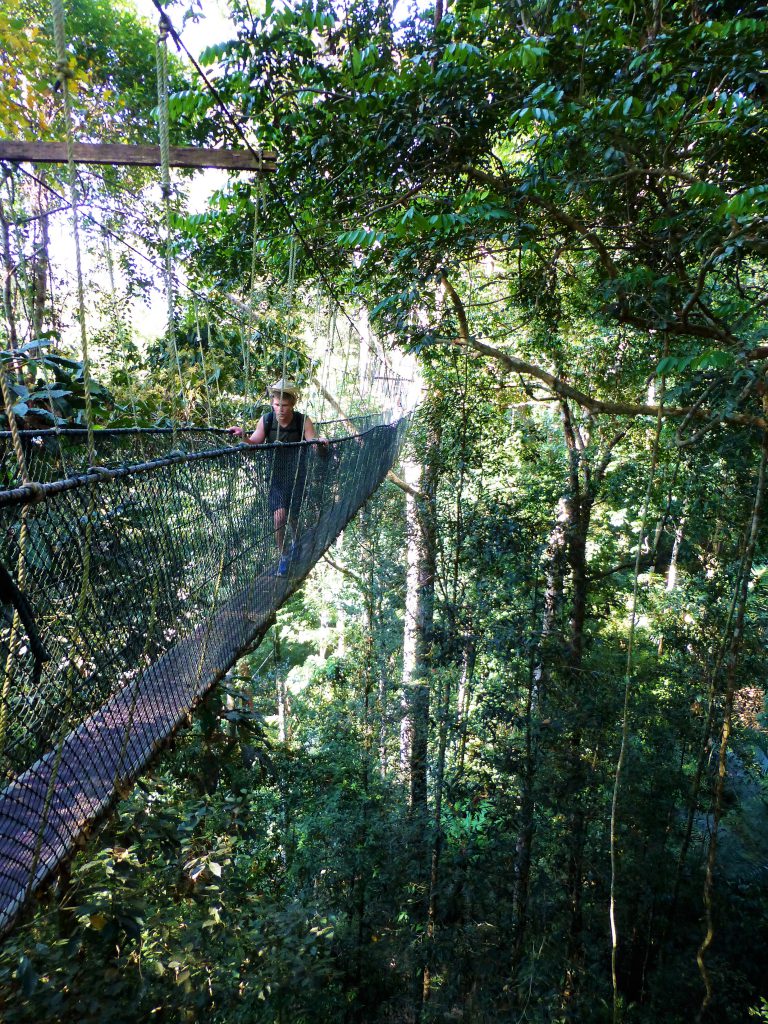 Would you dare Walking the Canopy?

The canopy is hanging between the trees. It is a strange but great feeling walking it. When you look down you again realize you’re really high in the jungle and still it looks like your walking under those big trees. 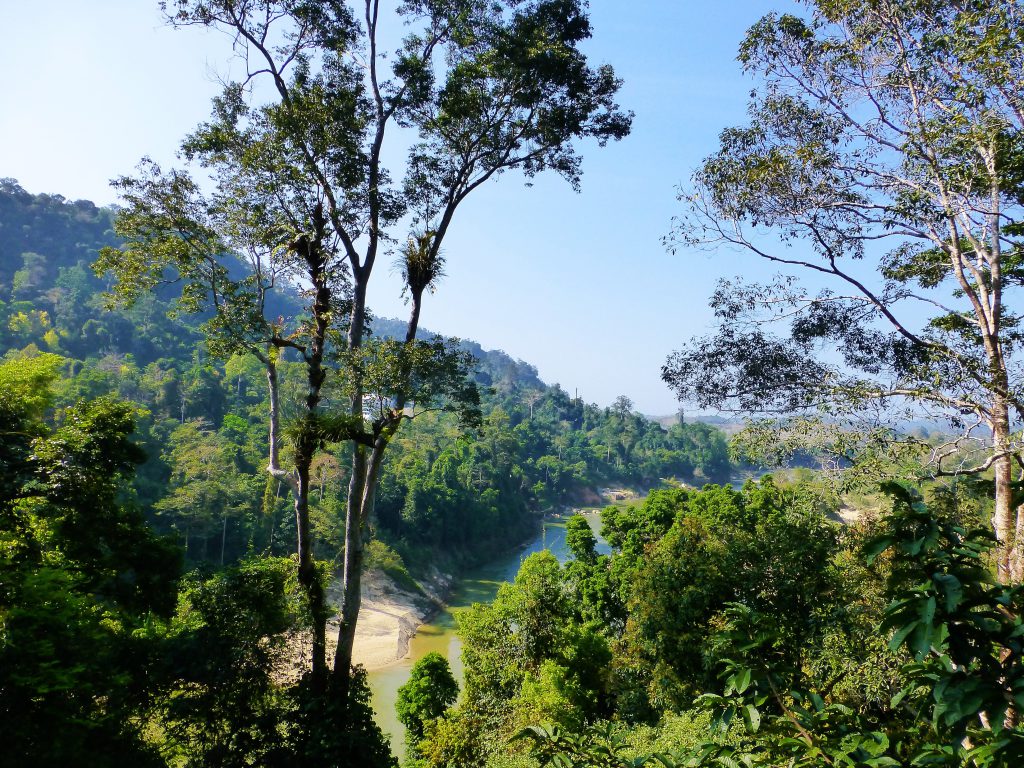 The person behind me was scared as hell, he had a fear of hights but he did it! He can be very proud himself. When your scared of hights and walking this thing I think you can consider yourself cured 🙂 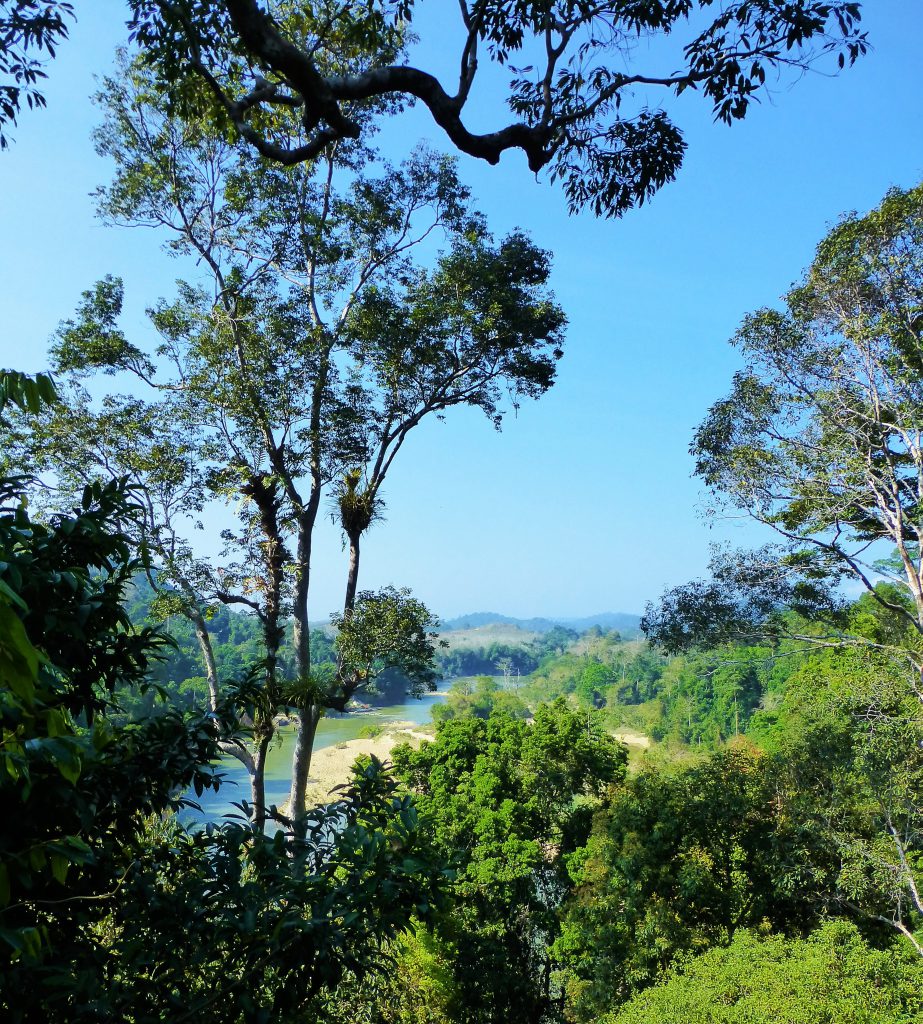 I gave him the tip to walk like me, in a straight line so the canopy wouldn’t waggle that much. He thanked me for the tip, it helped him a lot. I think he didn’t heard the tip in the first place because he was too scared to listen to the guide 🙂 But his friend, walking behind him, didn’t do that so he let the canopy still wobble a lot. 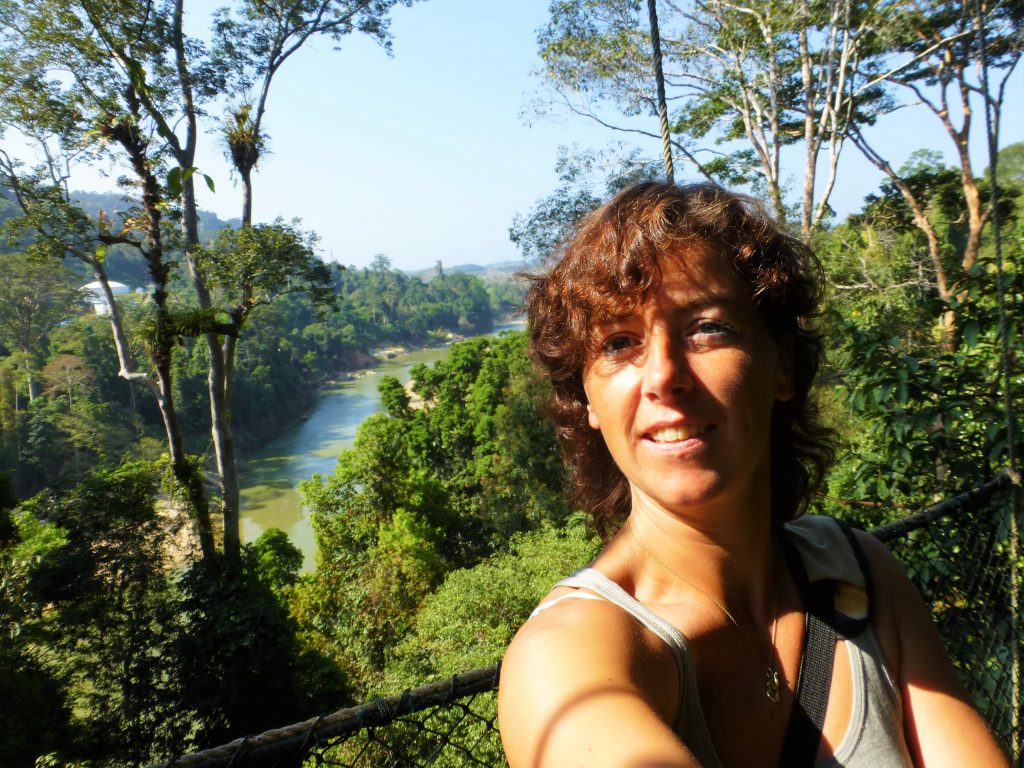 What a great view while walking the Canopy!! 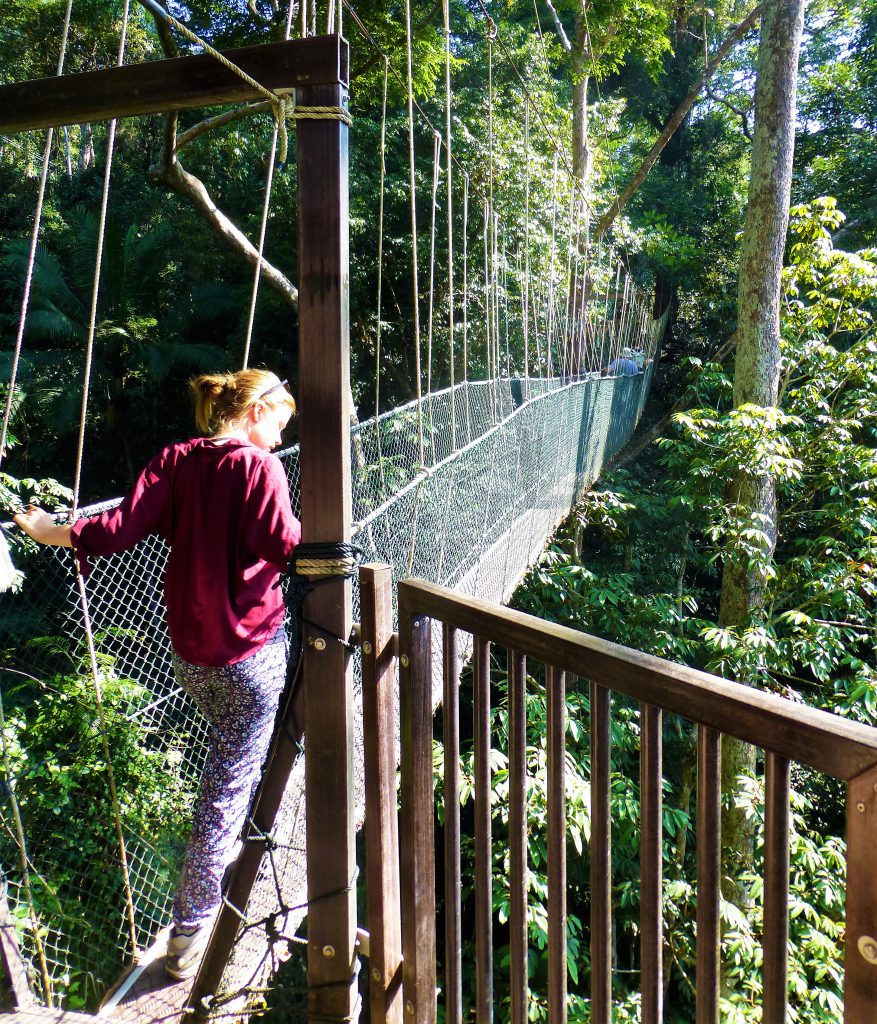 Walking the canopy again after pausing at a tree

At some point the canopy went up a couple of metres and because a stairs is ofcourse easier for climbing they put in some stairs! 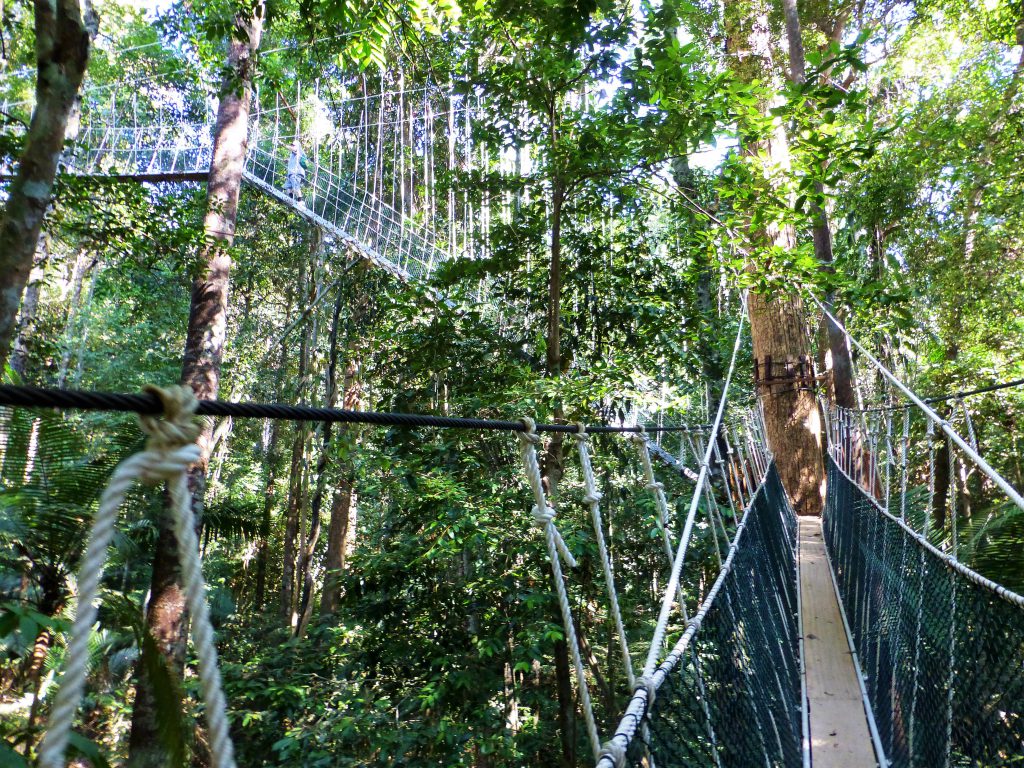 You can  see the canopy climbing  up the trees of the jungle. It went up for mtrs and so your  would get better and better. Can you imagine walking the canopy and climbing the trees like that? 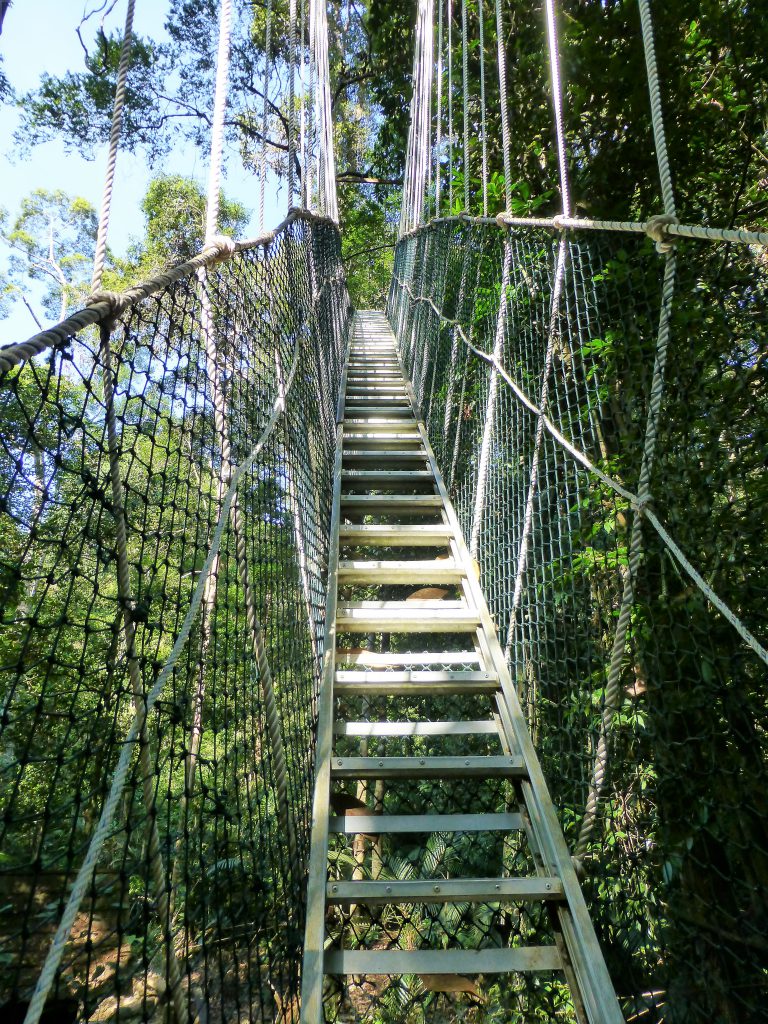 What to expect while walking the canopy?

It was not a long walk, even though it is the longest one in Malaysia, I really enjoyed my time up in the trees! I saw some birds through the binocular of a ranger that was sitting in the canopy to observe. He had a list of birds he had seen and spotted that day. On my self I only heard a lot of noises that indicated that there are a lot of birds but I couldn’t find them.

So this walk is not about the wildlife but just for the experience to walk high in the jungle and enjoy the beautiful views of the Taman Negara!!

Walking the Canopy in the Taman Negara

Would you like to do this too, save this trip and pin it!! 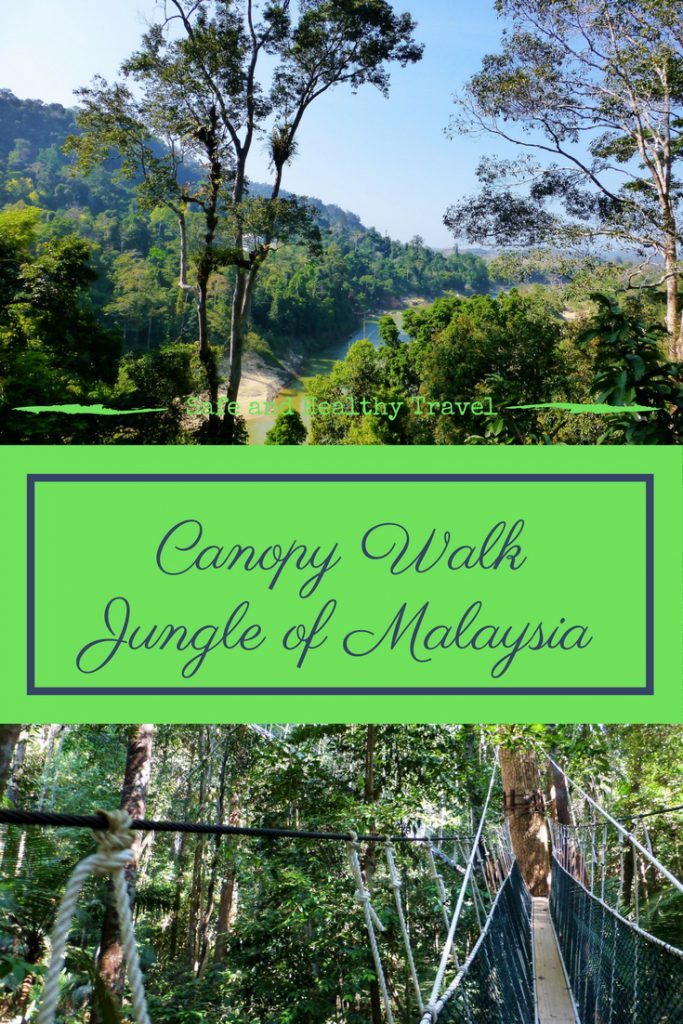 Flying and Old Plane in Poland

Cycling to the beach – Trinidad, Cuba

Or can I inspire you to do some yoga?

I hope you like this wonderful world as much as I do!!