When I was on Sumatra, Indonesia, I had to visit the Orang Oetan ofcourse in the rainforest near Bukit Lawang. I read a lot about it and ofcourse wanted to see them too!!

A Visit To The Batcave at Bukit Lawang

When we came to Bukit Lawang I was picked up by someone of a travelagency/guesthouse. On Samosir I spoke to someone who worked at the hotel I stayed in and he knew a good adress for me to stay and also to book the trip into the rainforest. This contact was Mudhi and he had a guesthouse: Ida Guesthouse.

That was great because I didn’t wanted to stay to long and waist any days. The room was good, it was cheap also. It was above a restaurant in a small street full of shops. This is the main street in Bukit Lawang and is along the river. They have 3 rooms, clean and good for a couple of days. The toilet is a western toilet but not with a flush 🙂 And a good but cold shower, not so bad for a couple of days!! 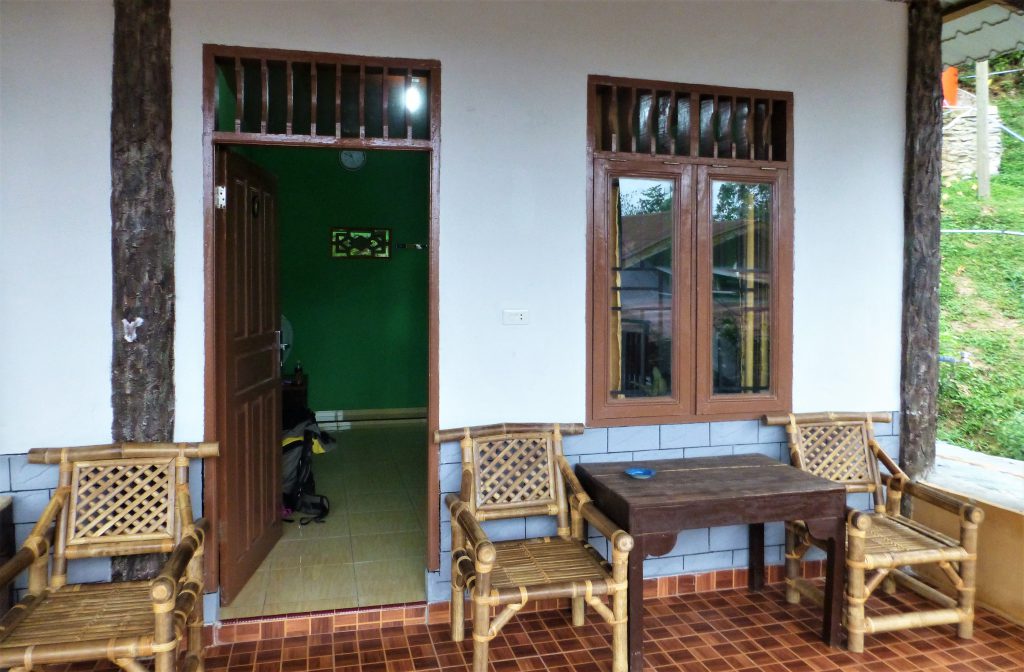 I loved my room at Ida Guesthouse!! 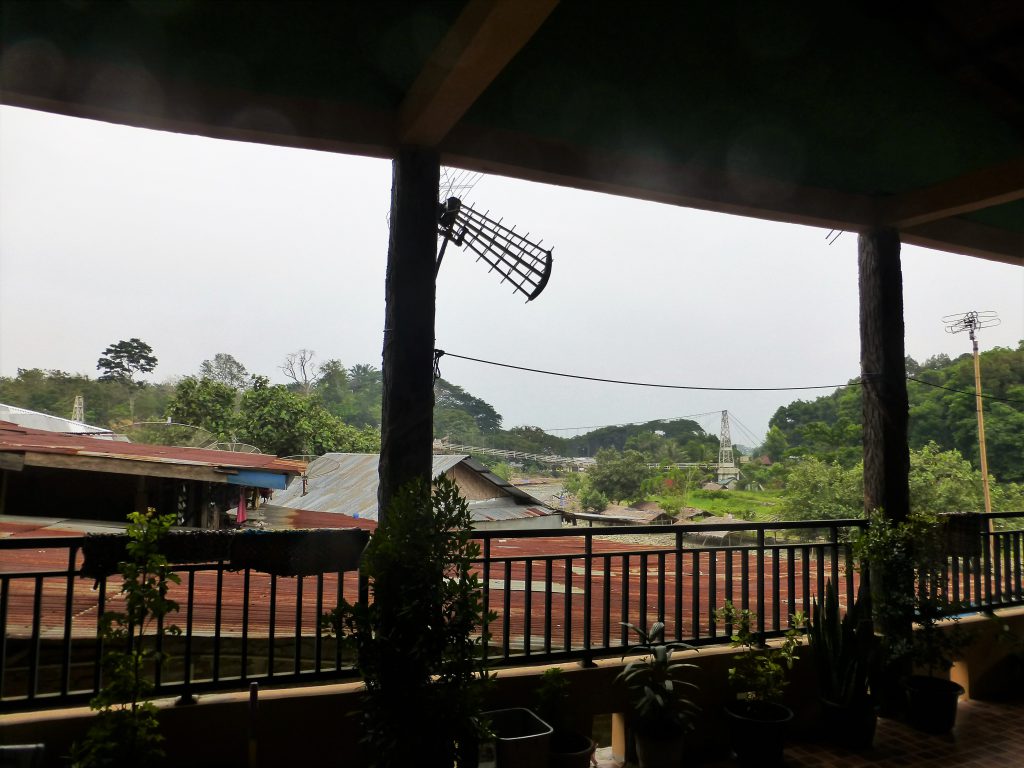 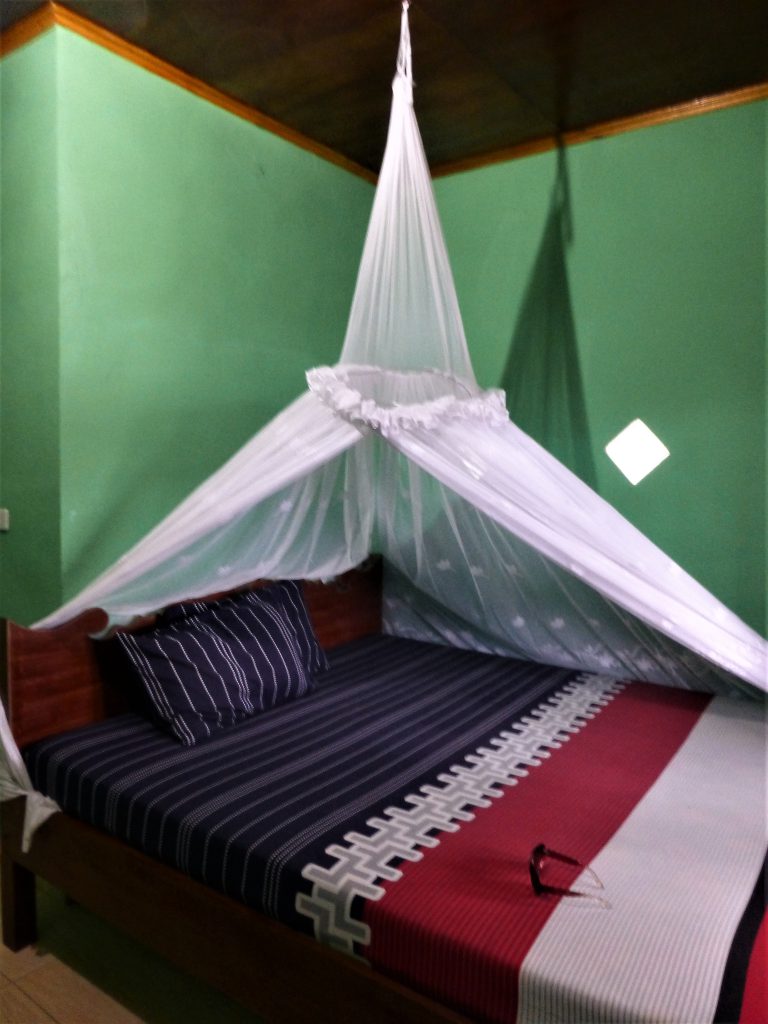 A Visit to the Batcave at Bukit Lawang

I could arrange a trip but not for the next day because they should have at least three people for the trip. A German couple booked the  trip for saturday and I could join. Well great, just a day around Bukit Lawang would be good to do some walking. And Mudhi had the idea to go to the batcave so I booked that little trip. The next day I went to the market with Ida, the lady of the house. She had to go there and I could join her on the back of her scooter. Great, did some walking around there and I helped her carrying the groceries. Afterworth I went walking through the town and along the river.

At the end of the afternoon I was picked up by Putra, he went with me to the batcave. We went walking, there is an ecotrail on the other side of the river which I unfortunately didn’t knew about earlier otherwise I would’ve walk that ofcourse. But now we walked a part of it. We passed a great garden with all kinds of fruit trees and plants. There was a tree which houses a snake but it wasn’t there at the time 🙂

After we passed the local orphanage, he told me that the village was strucked by a flood on 2 november 2003. It was on a sunday night at 22 hours. Most of the people were sleeping or inside their houses when the whole village was ran over by water. He told me that in there is a lake in the mountain, it is high in the mountains and that night one of the sides of the lake had collapsed. It  happened on the side of their village so the lake just emptied on that side and filled the little river along their village.

It was so much water that it took with it so many trees and rocks. The water was so high at the point of reachingg the village that almost everyhouse along the river was destroyed and unfortunately all the people that were in there killed. He told that many people were never to be found because the river took them with to the sea. This was a big disaster but then, he told me, the gouverment didn’t do anything to rebuild the village for 3 years. They only started to invest in the village after three years so still there is a lot of work to be done. 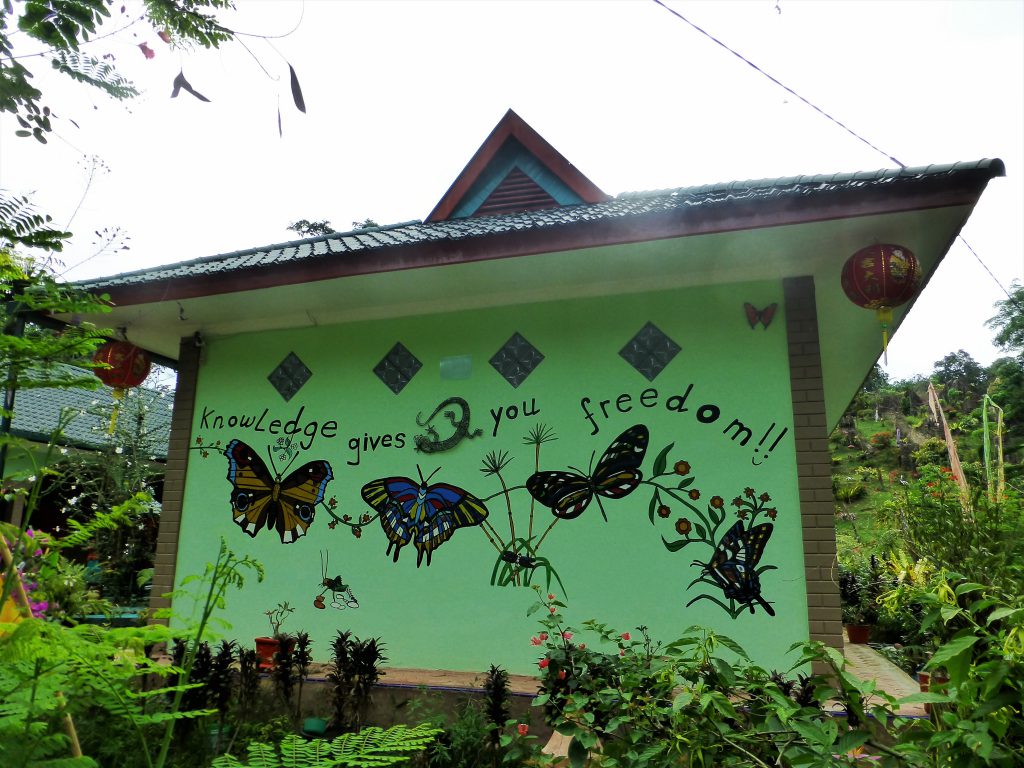 After the orphanage we started to walk in oil plantation side, so in between the oil palm. Also some rubber plantation but most of the area is oil palm plantation. 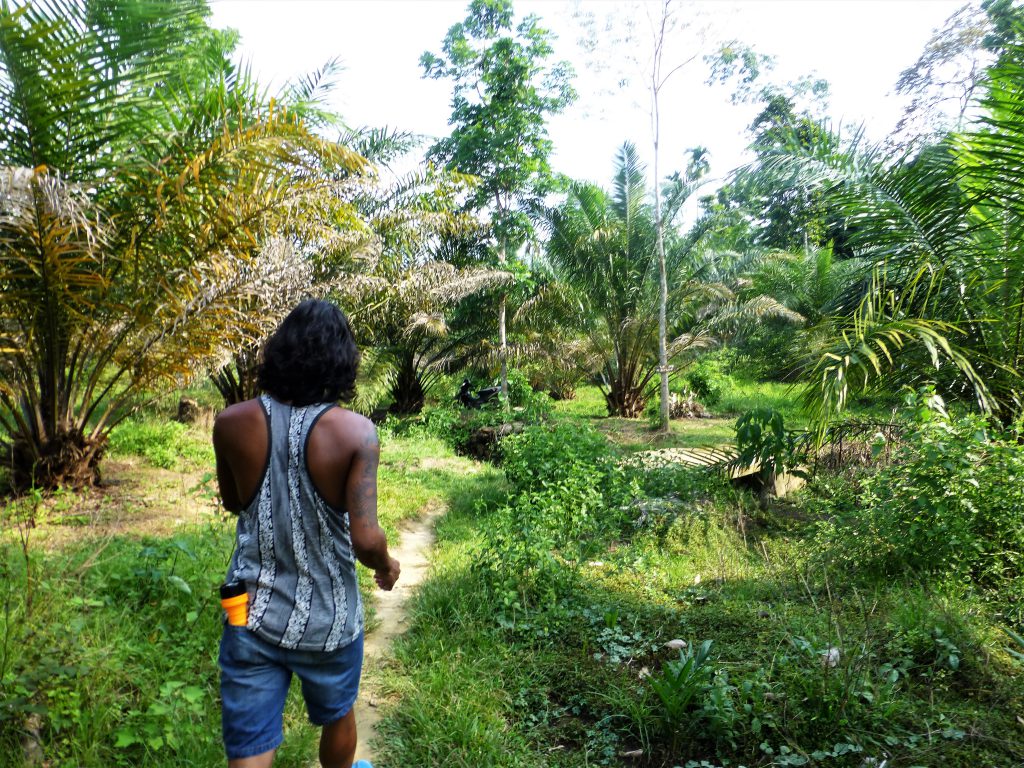 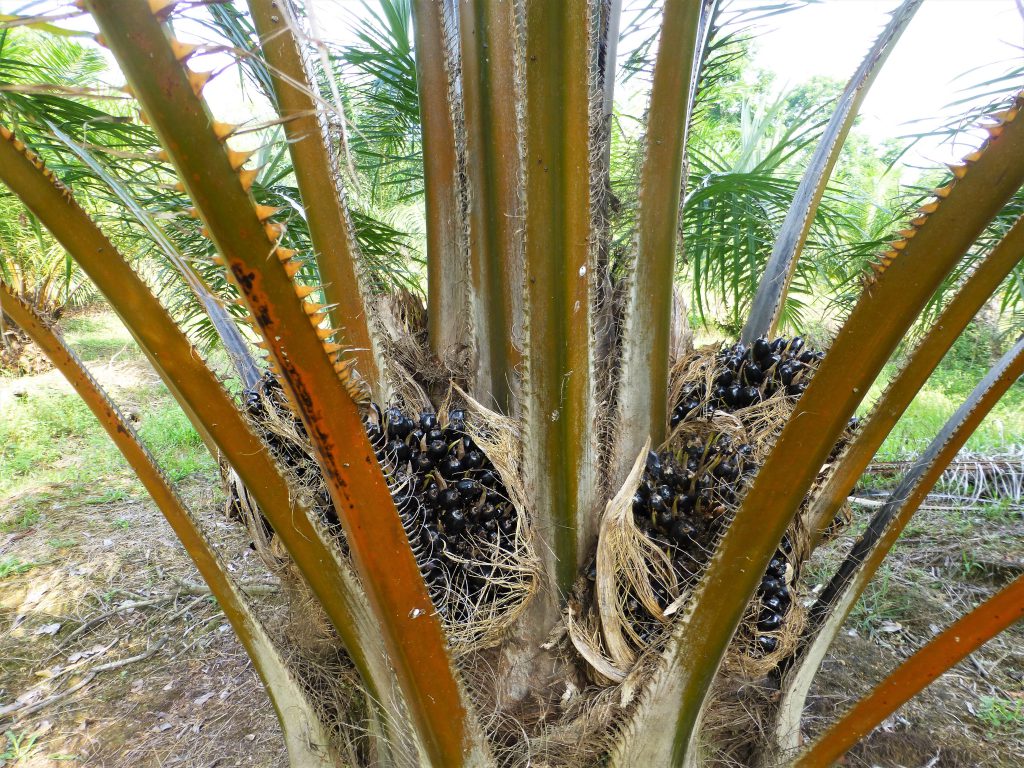 The fruits of the oil palms 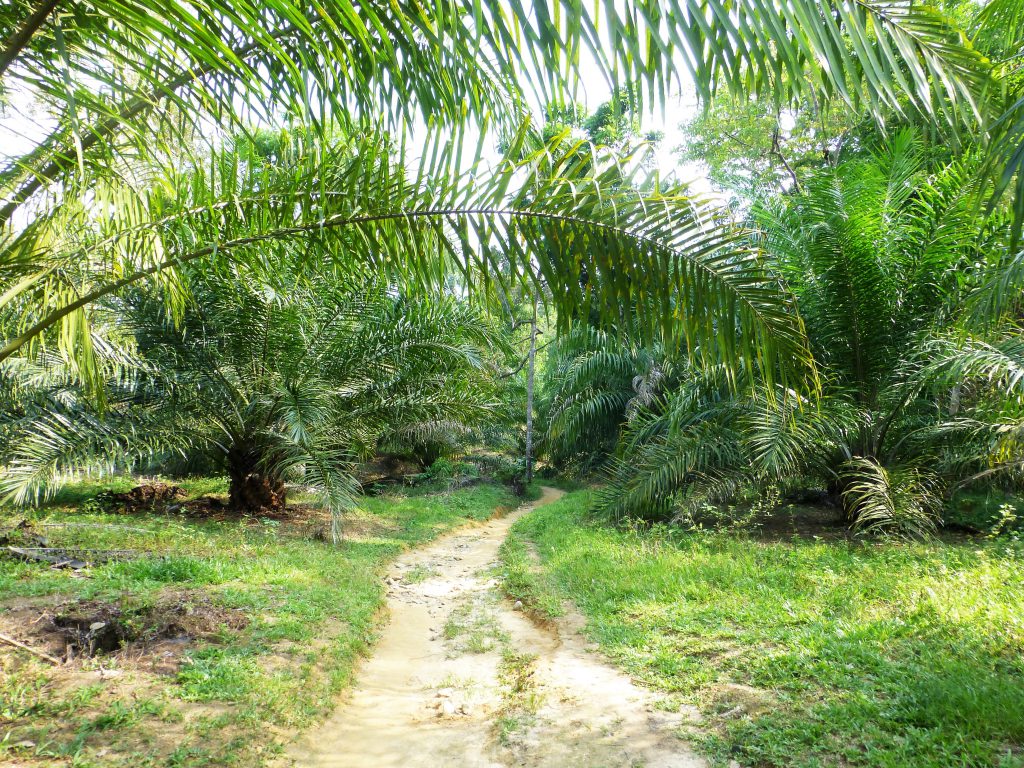 After a half an hour walking we got to the cave. A man was sitting there and I had to pay 10.000 Rupia. We sat down for a minute, we were both very hot from the walk. It started to rain a little bit but that didn’t cool it down.

After some minutes we went through the fence and started to walk further into the forest untill we got to the cave. Now we had to climb onto the rocks to get into the cave. It was a bit cooler in there, that was real nice. Also dark, I got a torch from Mudhi so could light it up. We started to walk in to the cave and climbed our way up and down. Some parts were really narrow and slippery so it was a challenge to do it also. 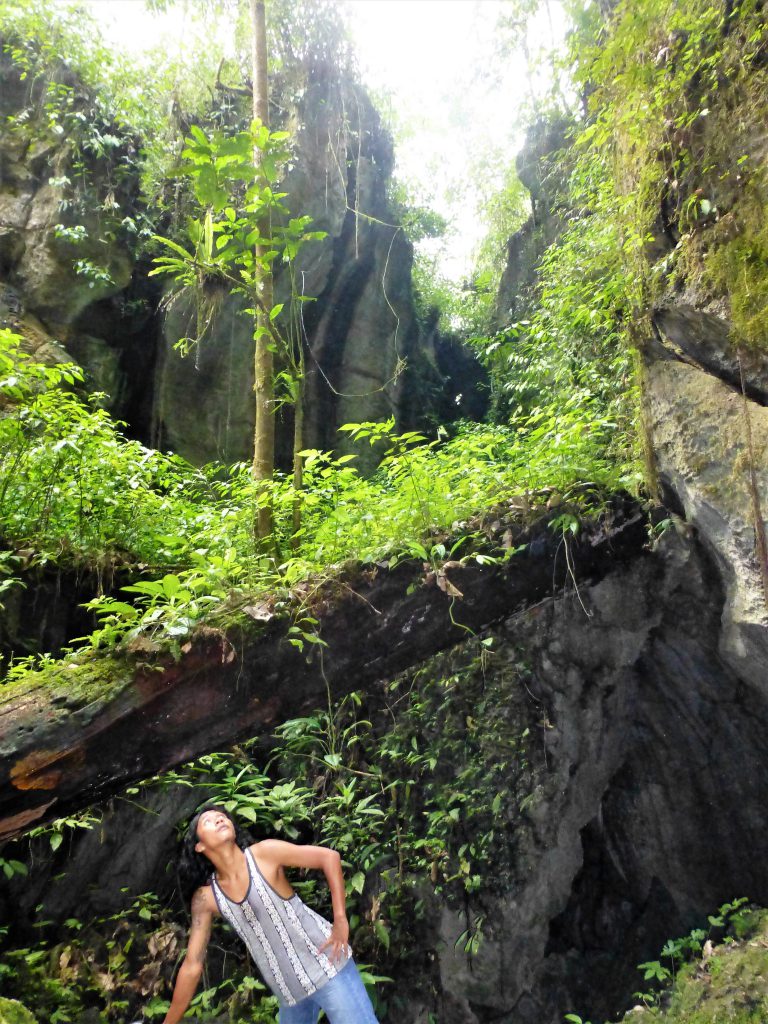 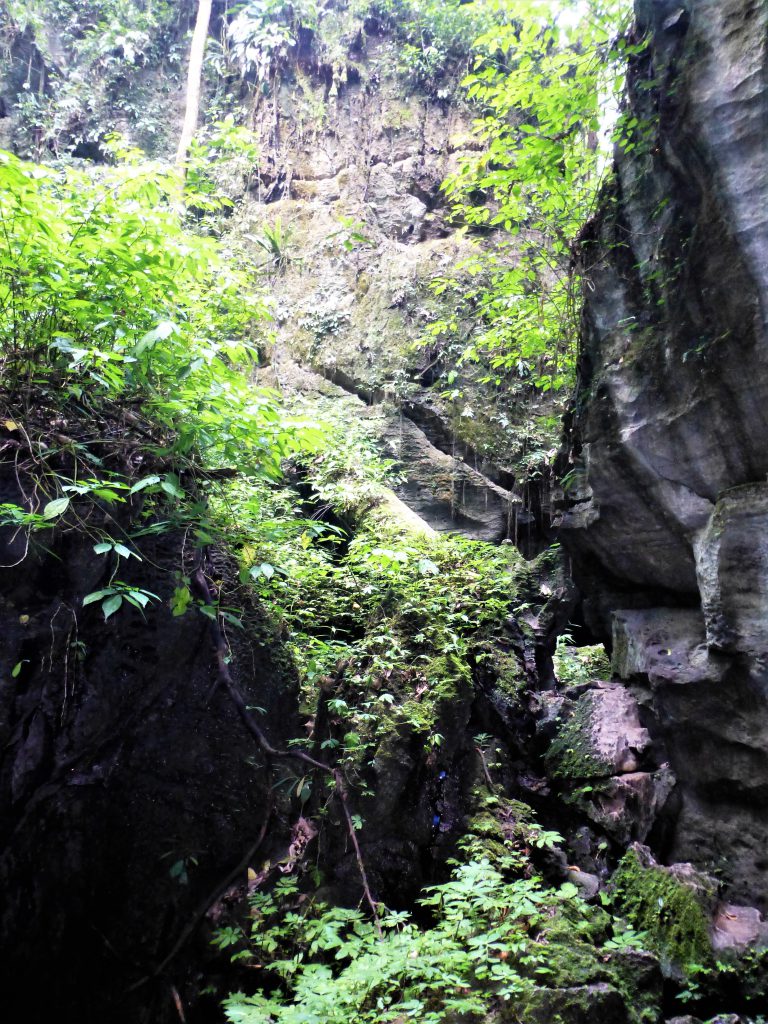 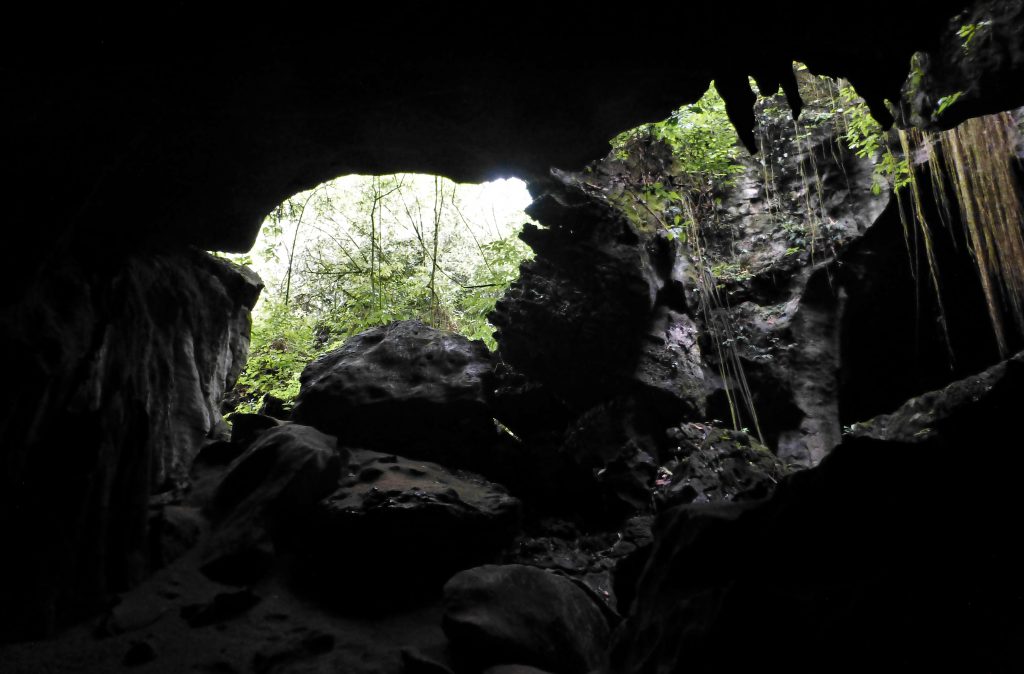 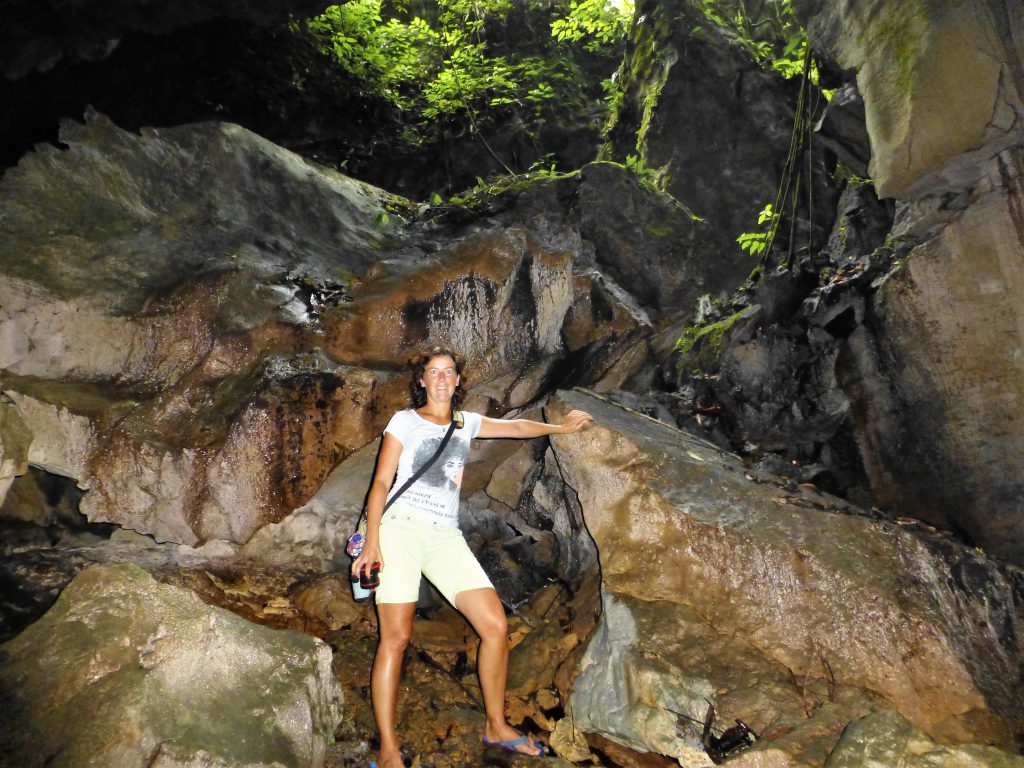 In the first cave we saw some small bats hanging.  We went further and got out of this first cave to enter another. In that cave we saw many bats hanging on the ceiling. They were hanging in groups and seperately. You could here them communicating with eachother also. Everytime we turned on our torches to look at them they were probably a bit irritated and started to make those noises. Some would fly off but most of them just stayed there hanging upside down.

A Visit to the Batcave in Bukit Lawang 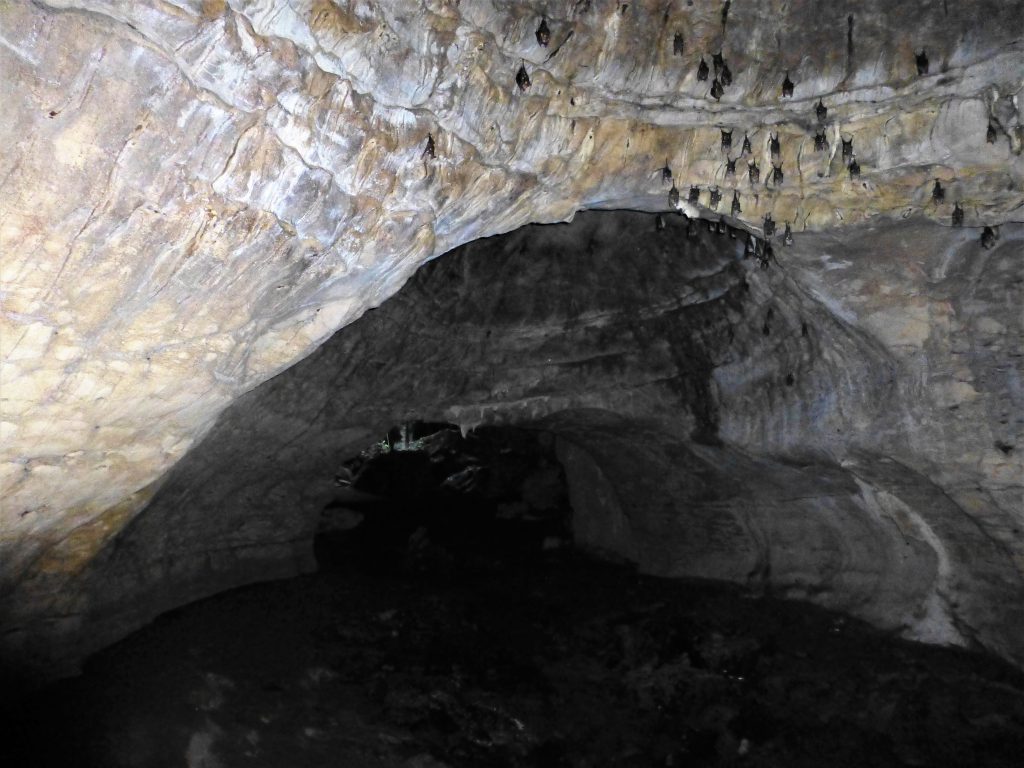 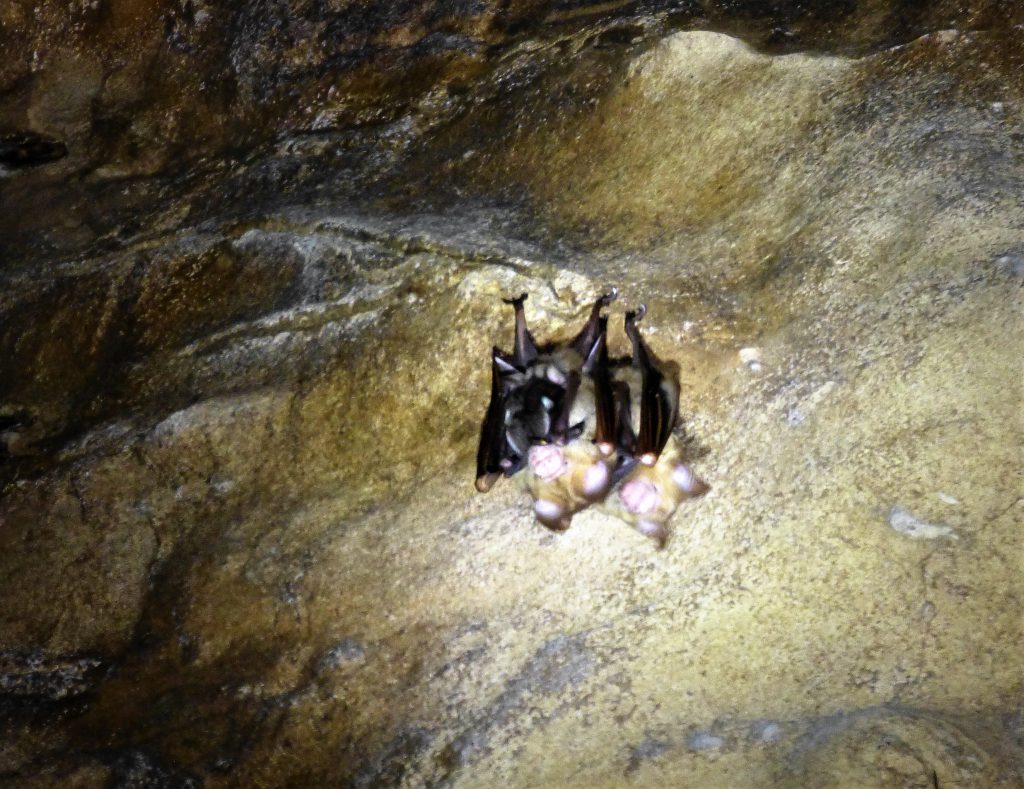 The Bats hanging in the Batcave at Bukit Lawang We went to a third cave and there we did saw again bats but also swallows. They had a nest in there, didn’t expect those in a cave 🙂
And Putra started to look for big spiders because he said, he saw a real big one the other day 🙂
We did found some nice spiders, also a lot grashoppers and some frogs. We didn’t expect those either 🙂

It was a real nice walk and search. Loved it that Putra started to look for other creatures, I ofcourse joined in! He ofcourse expected me to get scared…but I love all creatures and got some pictures 🙂 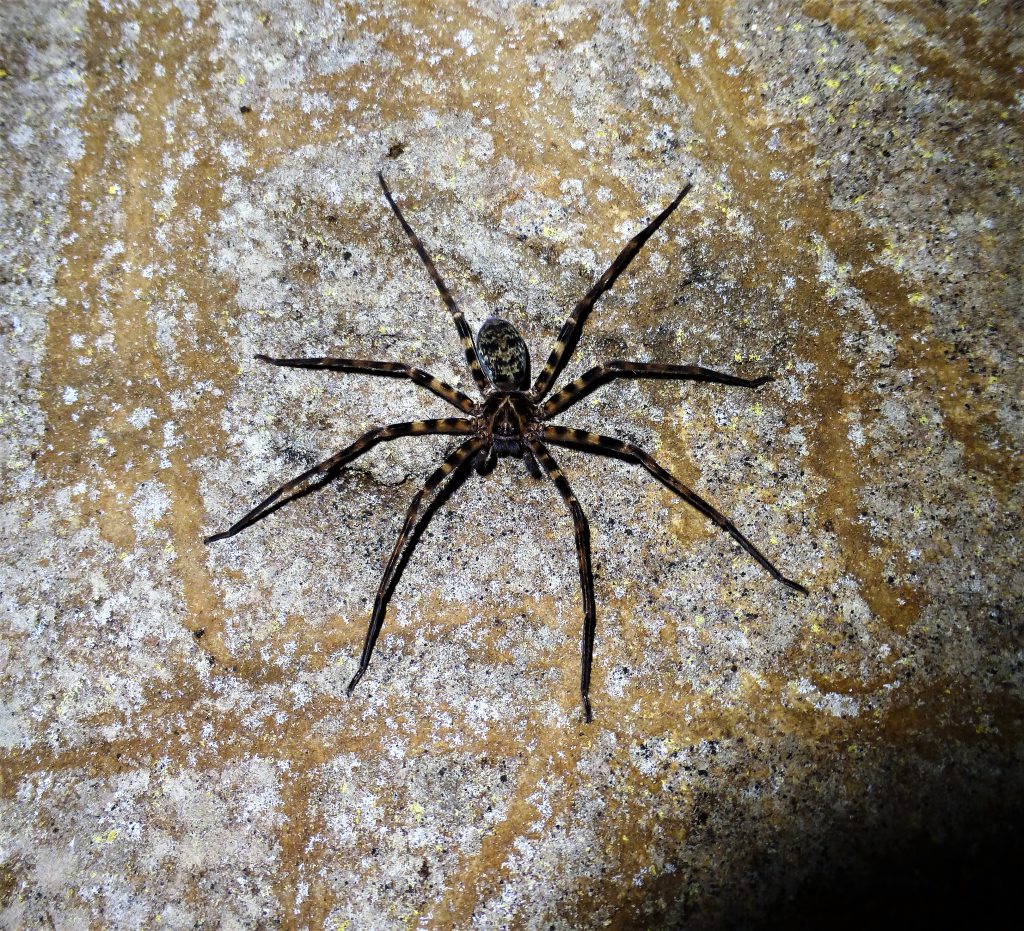 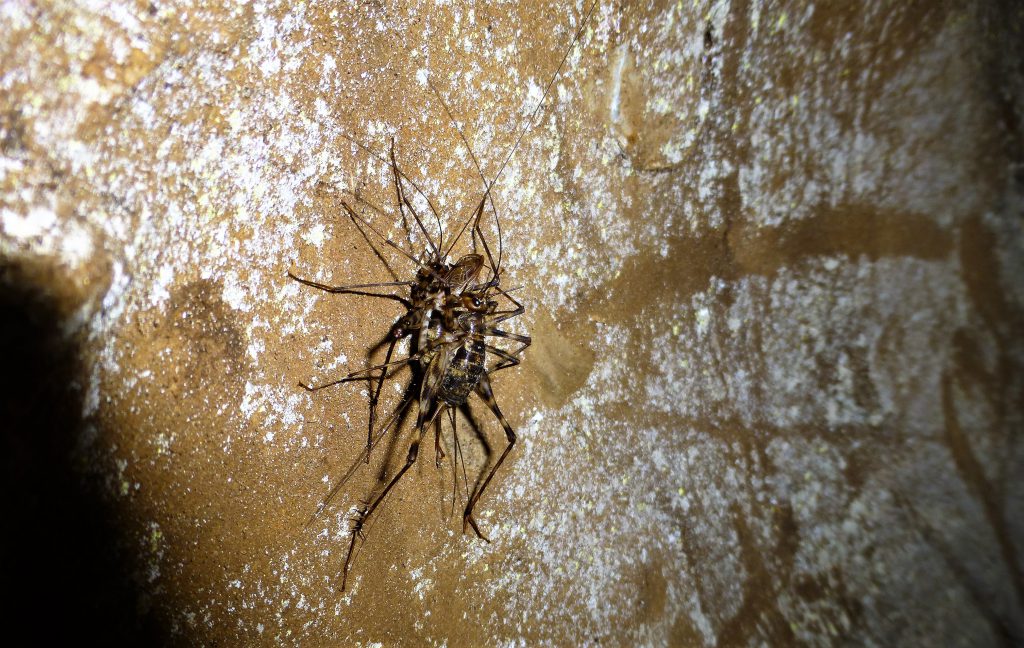 You see the frog in the hole? 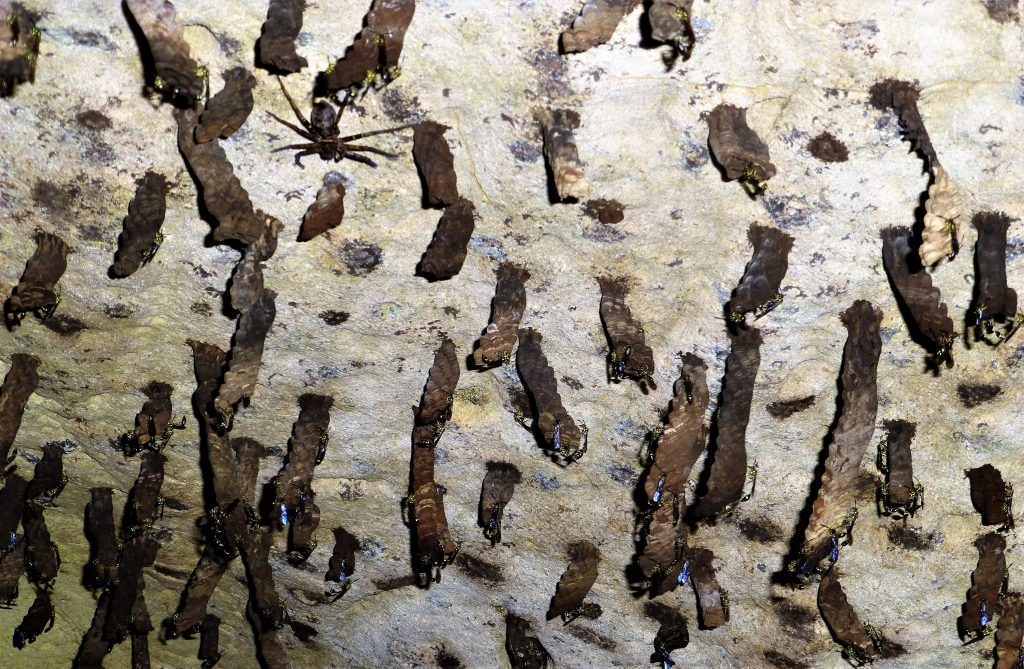 These were bees Putra told me, with also a big spider 🙂 At the exit of the batcave

When we started to walk back I saw some great butterflies, got a real big one on the picture. Also the snake was in the tree!!! And then it started to go darker, we heard also the thunder and saw some lightning. After making some pictures we started walking back, a short cut when it started to rain. 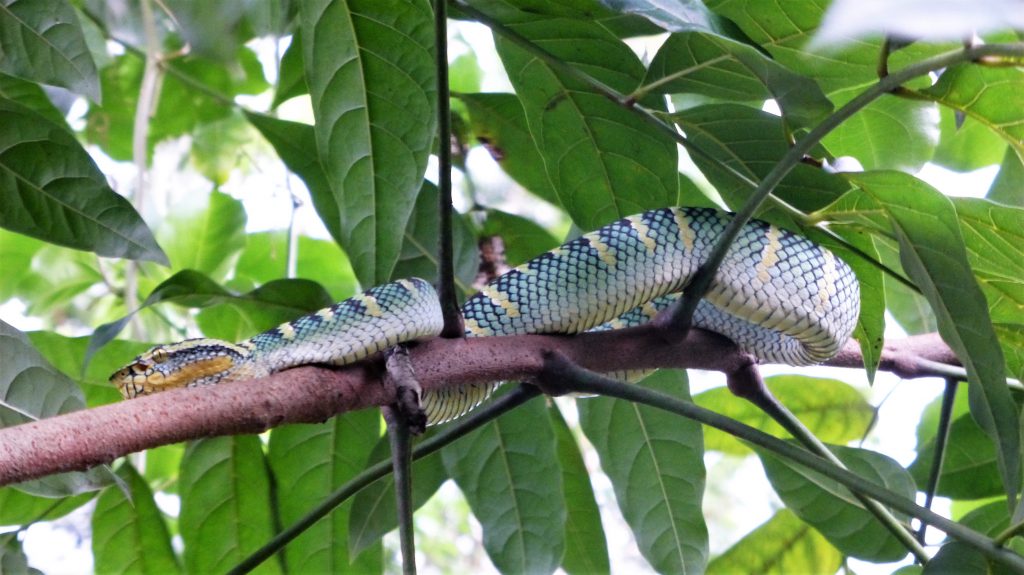 But before we got back it really hit off raining and we were soked when we were back. I really did enjoy the walk and the climb and can recommend to take this trip!! Bukit Lawang and its surroundings

I was on Samosir, Lake Toba, when I left in the morning to catch a minivan to Bukit Lawang. It was a 7 hour drive, half way we were at Berastagi. Some of the passengers got off there, they wanted to climb the vulcano the next morning. There are 2 active vulcanos near that village, Sibayak and Sinabung.

We drove on to Bukit Lawang. At some point I saw the view changing from houses and villages and farming to only palmtrees. We drove for at least 1,5 hour in between only palmtrees. All the other green was gone, this was all oil plantation. I saw the factory with the company name on it, LONDON SUMATRA INDONESIA. So sad!!

We saw all kinds of trucks driving packed with the fruit of these palmtrees. The driver told that it was a good living for the locals in the beginning. Now they also realised that it is such a shame that all the rainforest is gone so the gouverment has now parts of the rainforest protected. Gunung Leuser National Park, this is the park where I was headed for and it is only a fraction of the size what it used to be. Read more about my visit at Bukit Lawang. The next day my two days adventure started in the Jungle!! Seeing the Orang Oetan

My Favorite Yoga Pics from Around the World

3 Days in the Jungle of Kota Kinabatangan – Borneo

I hope you Love this World as Much as I do!!