When I was in Laos I had read about the Mysterious Plain of Jars and decided that I had tot go there even though it was a big detour on the route I was planning. I don’t hear many tourists about them but I really wanted to see that mystery! And I can tell you, I wasn’t disappointed at all!!

The plain of jars is located near the city of Phonsavan in the highlands of Laos. Phonsavan is the capital of the province Xhieng Khuang and holds 60.000 citizins.

It is still a mystery what they used to do with the jars. They found a couple of sites and at some you can come at visit. I choosed to do Jar Site 1 and 3.
Plain 3 is quit small and there are 150 jars, on site 1 which is a long plain they’ve found several hundreds jars. Some of the jars might date back 2000 years!!

The Mysterious Plain of Jars 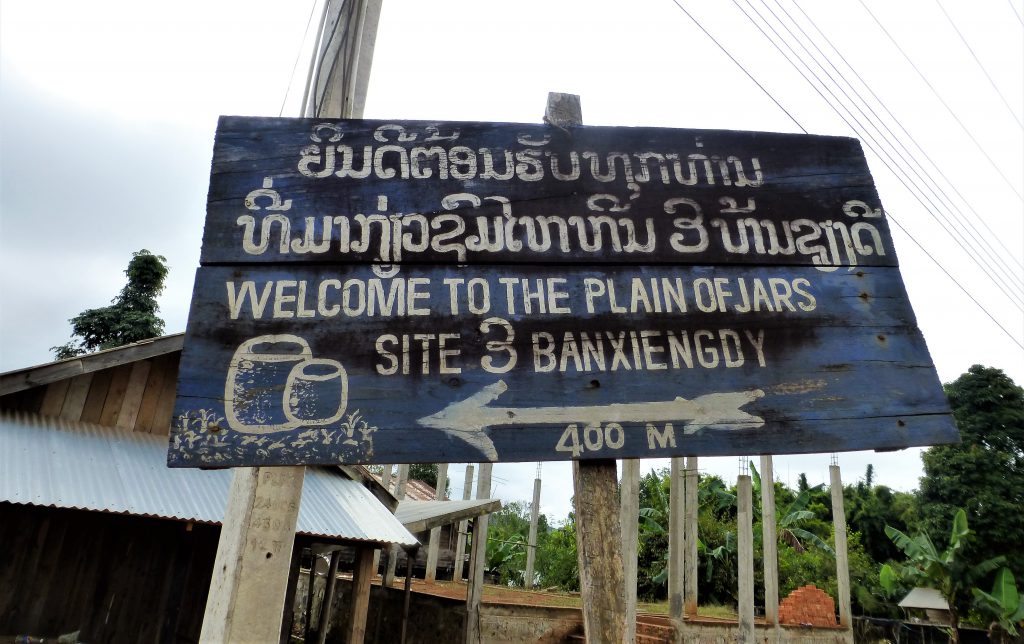 To get there we hiked a short but very nice scenic hike across some paddy fields and farmland. I liked that a lot!! You get the feeling of a country and its culture so much better being outdoor and hearing the noices and feeling the weather against your skin!

The sun came out and was very welcoming on my skin. Because Phonsavan is on a higher altitude it can be cold in the early morning and evenings. 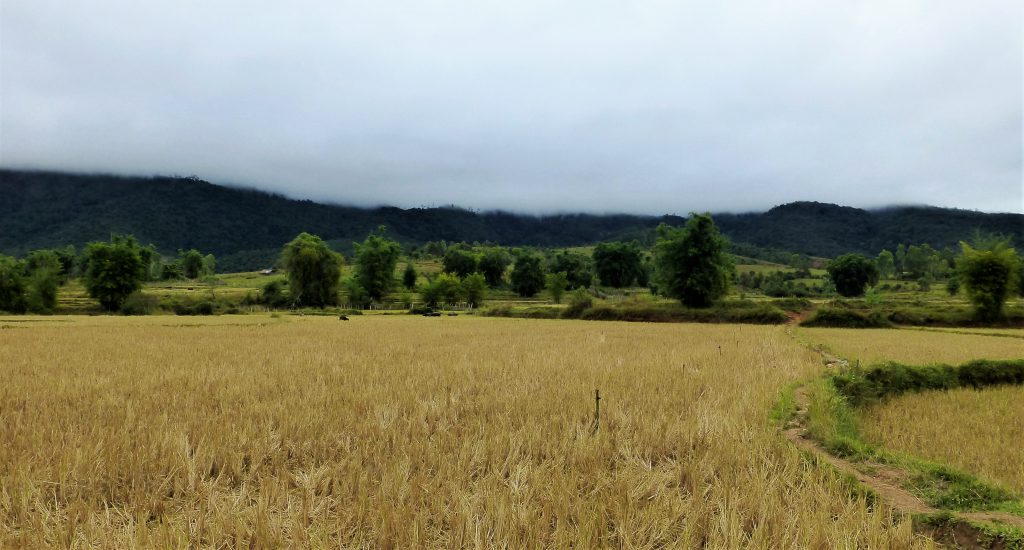 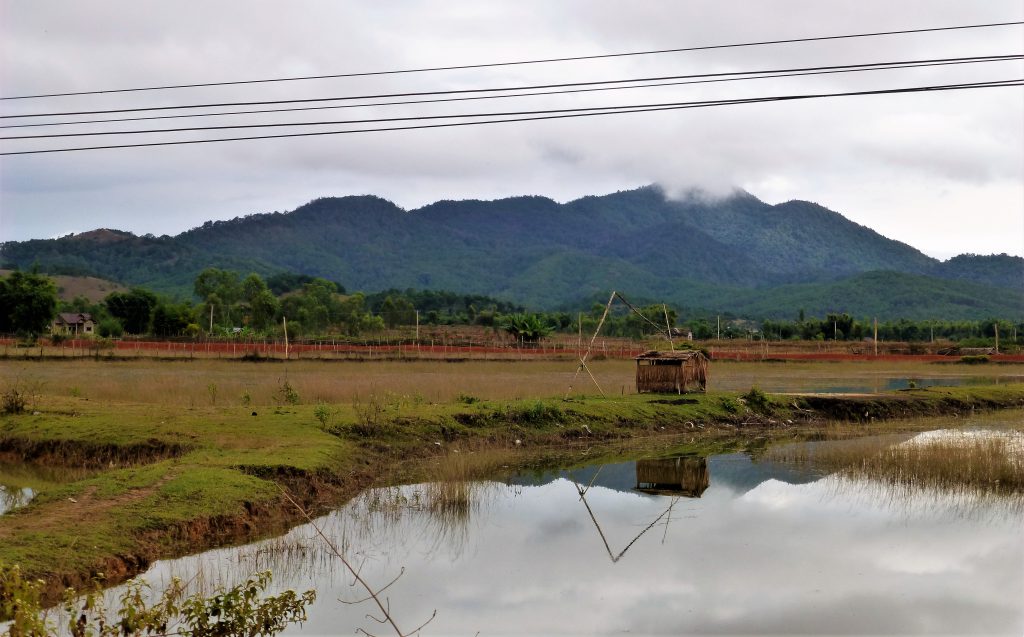 And then all of a sudden you come by a plain. A plain in that great Laotian landscape and you see a couple of jars… and you see some more.. and still more…
It was so strange!! 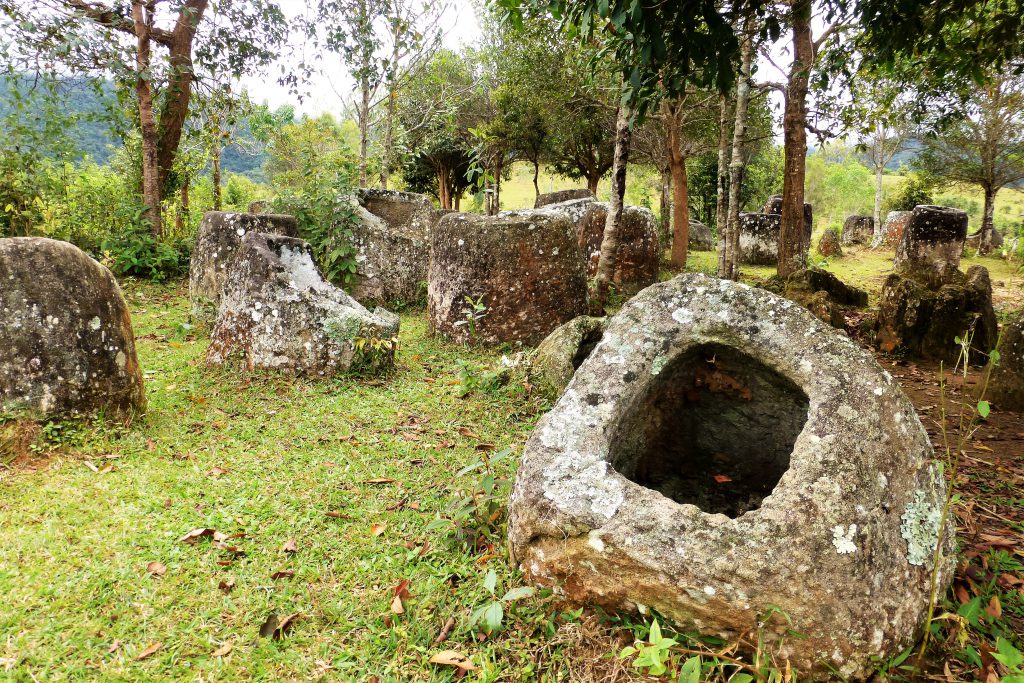 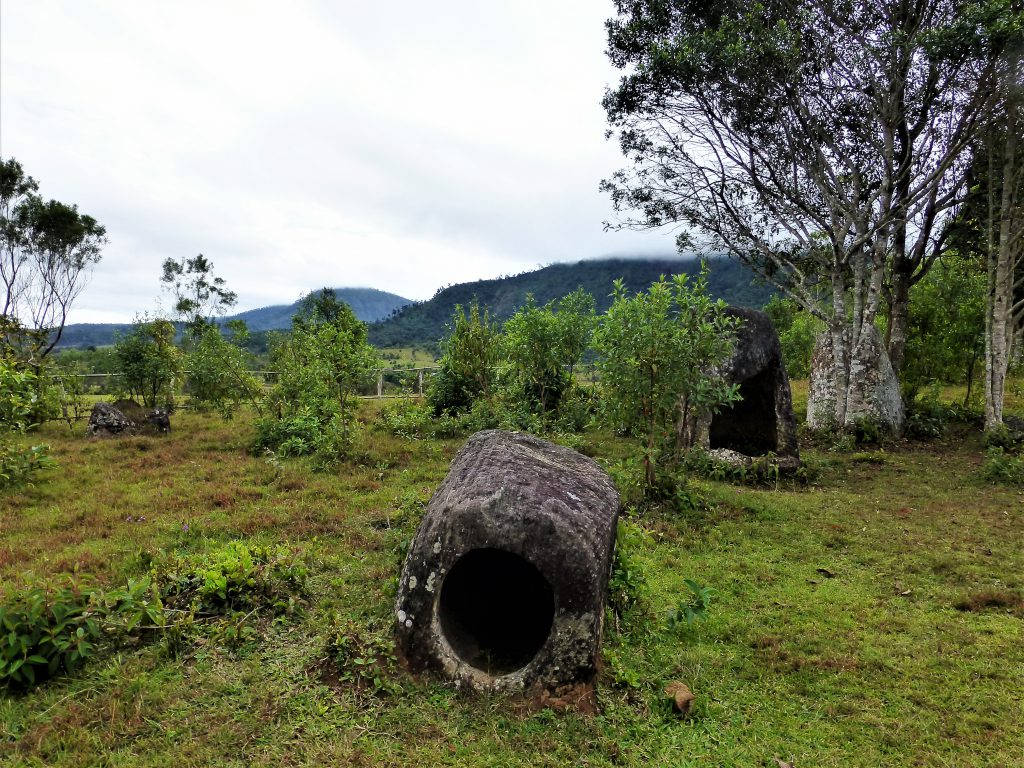 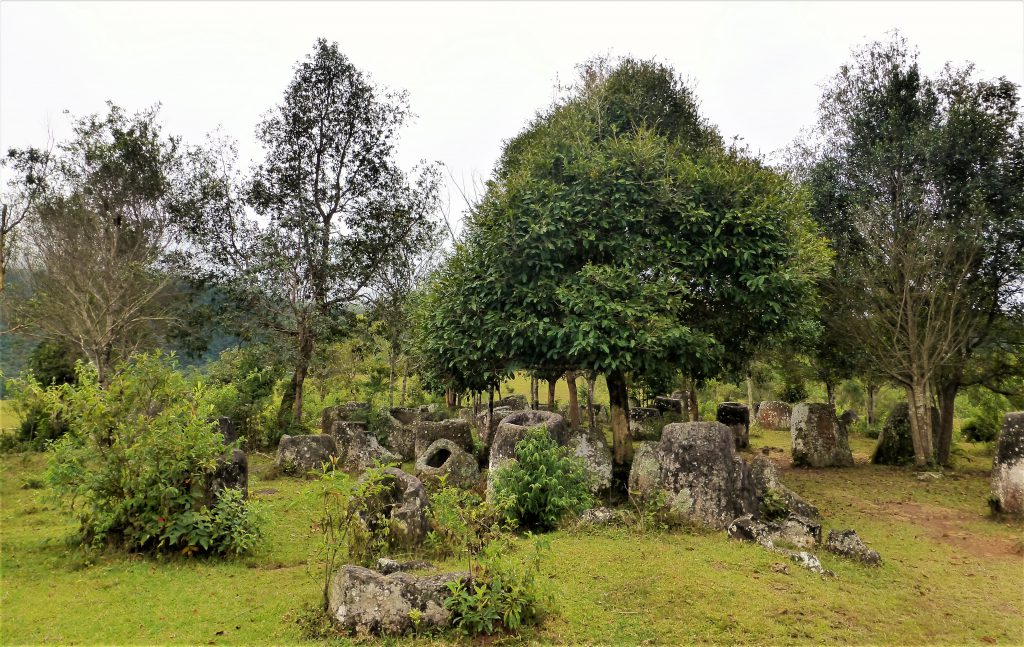 Can you imagine walking in between

these Plain of Jars in Laos 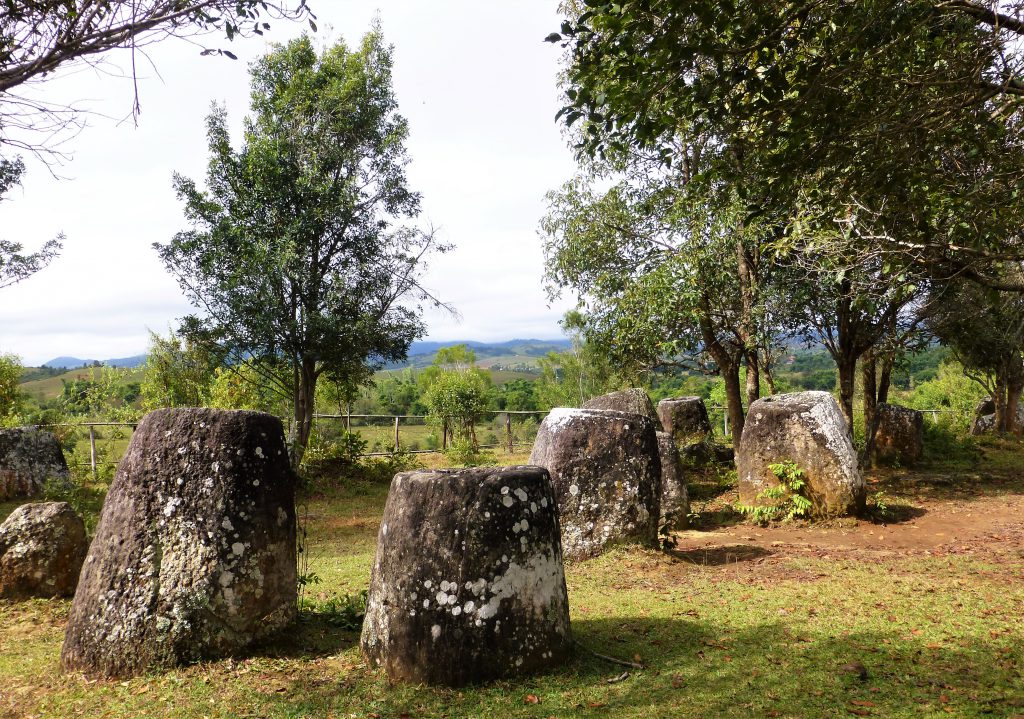 In the Second Indochina War, Laos has been bombed a lot. Laos is one of most bombed countries in the world! And in Laos Phonsavan is one of the most heavily bombed places.So make sure to stay on the marked path and don’t wander off! It might cost you your life! Still most of those bombs are there.

They work hard to make it safe but still every year an average of 60 people die due to unexploded bombs. 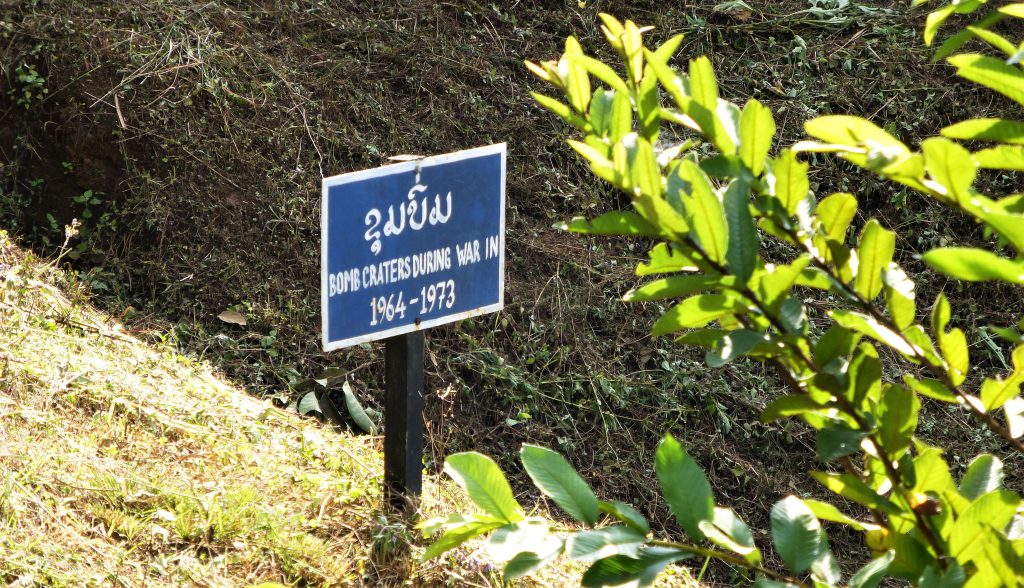 Tip: Be Aware of your surroudings and stay on the marked path!! Phonsavan is the most dangerous archeological site on earth because of all the unexploded bombs.

When I took my trip there our guide told us to stay on the path and he was serious about it because of those bombs. Everywhere I saw markers to lead us on the clear path. On the markers it says MAG, Mines Advisory Group. 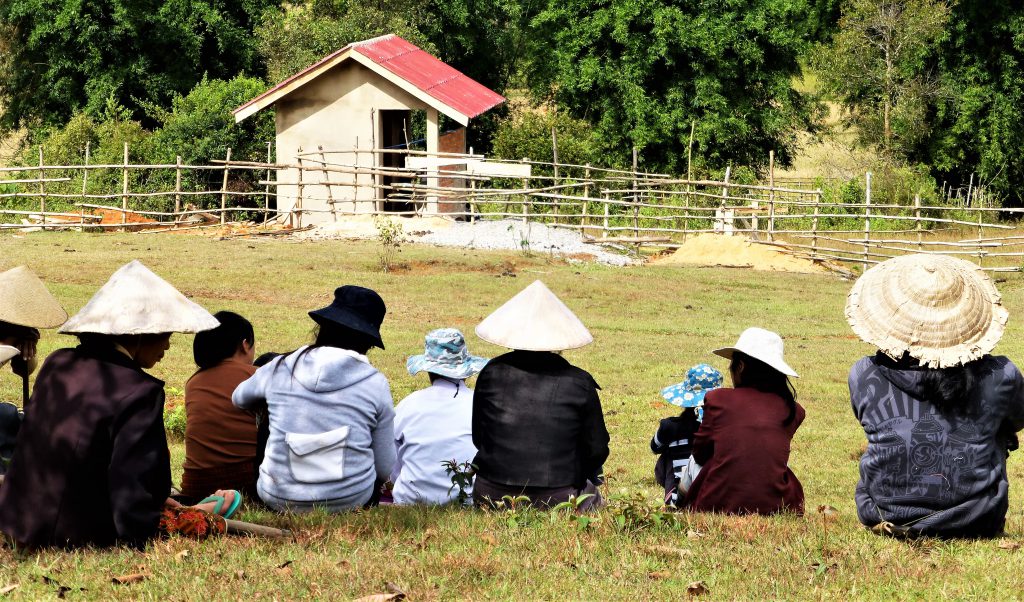 Lao workers having a break

The biggest jar they found is located on Site 1. It is a really big one, standing besides it you feel small. You start wondering how they even managed to build the thing? And for what use? And then even relocating it?? They told me the stone came from an neighbouring area a couple of K’s away!! 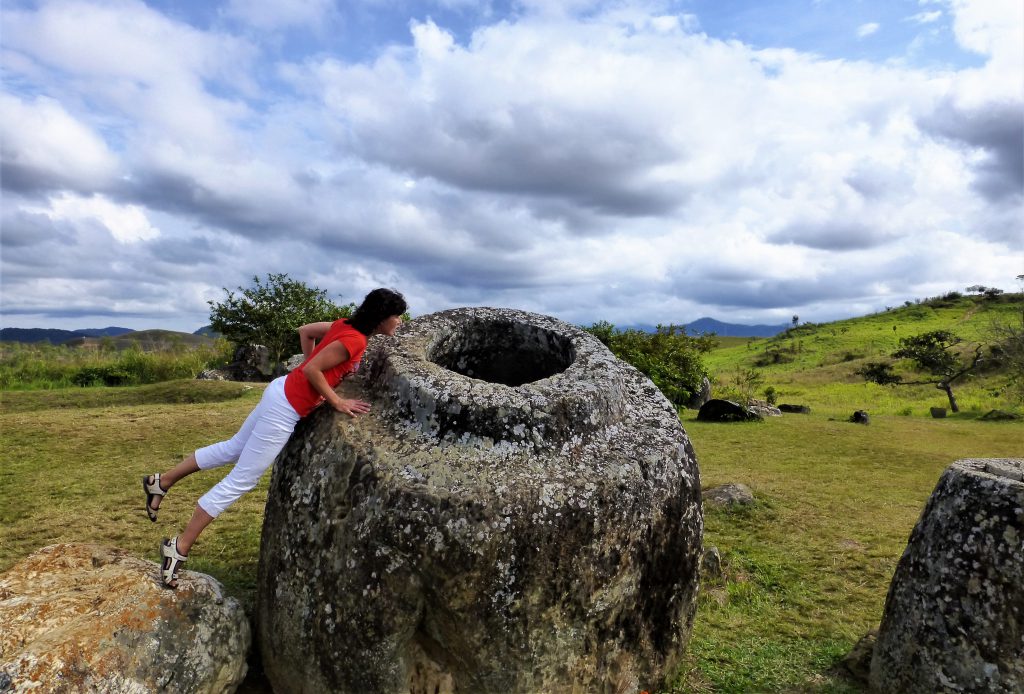 Looking in one of the mysterious jars is not easy!!
Do you see how big it is? 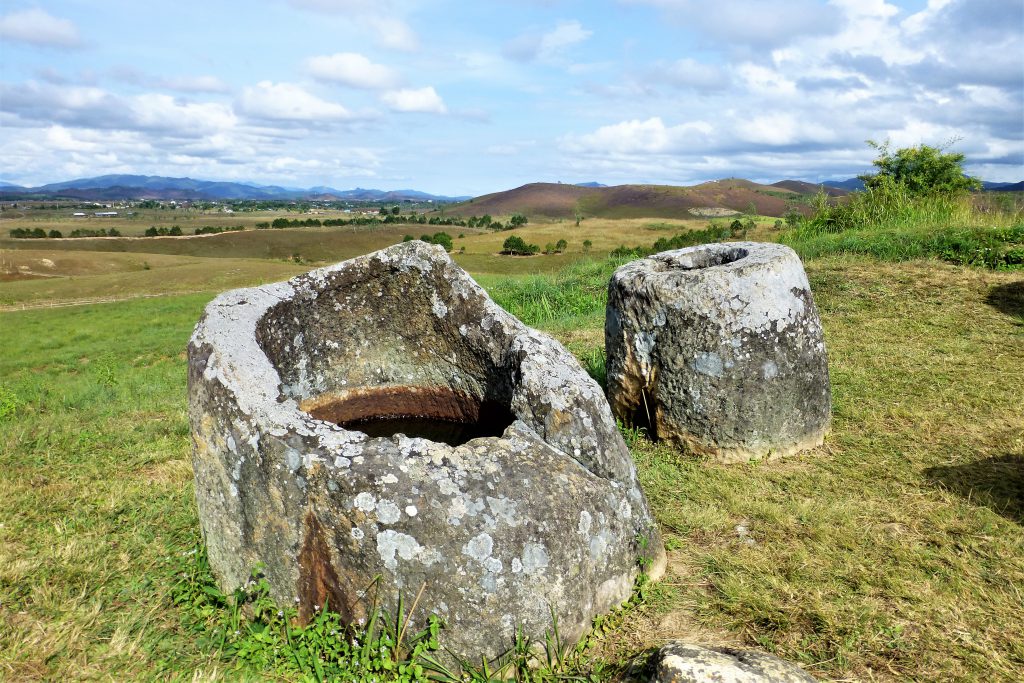 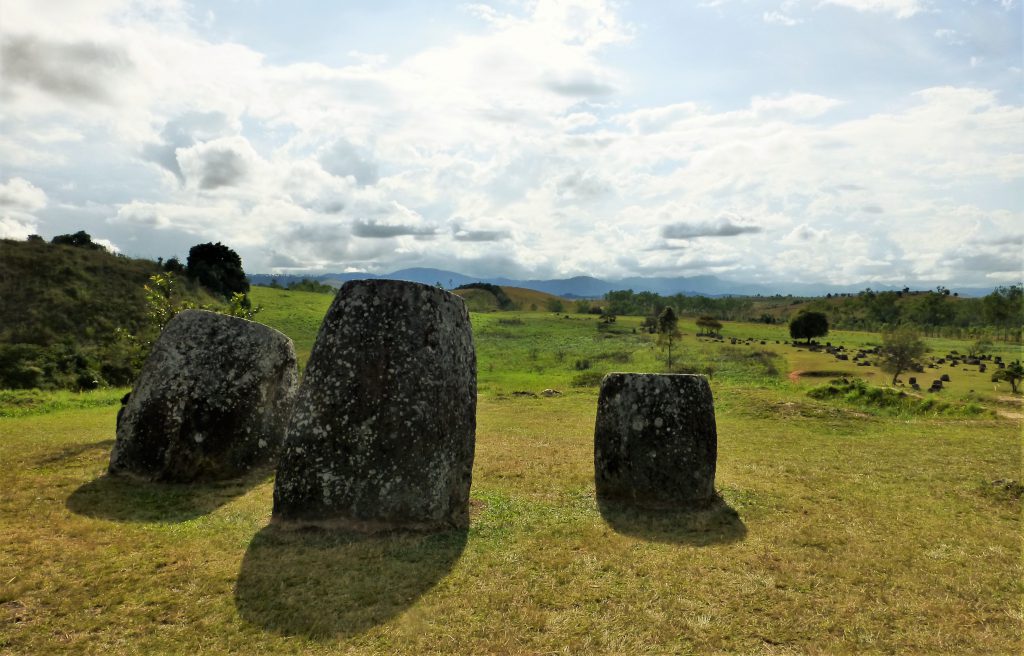 Isn’t this area just great?
And how is it possible that there is so little known about this? 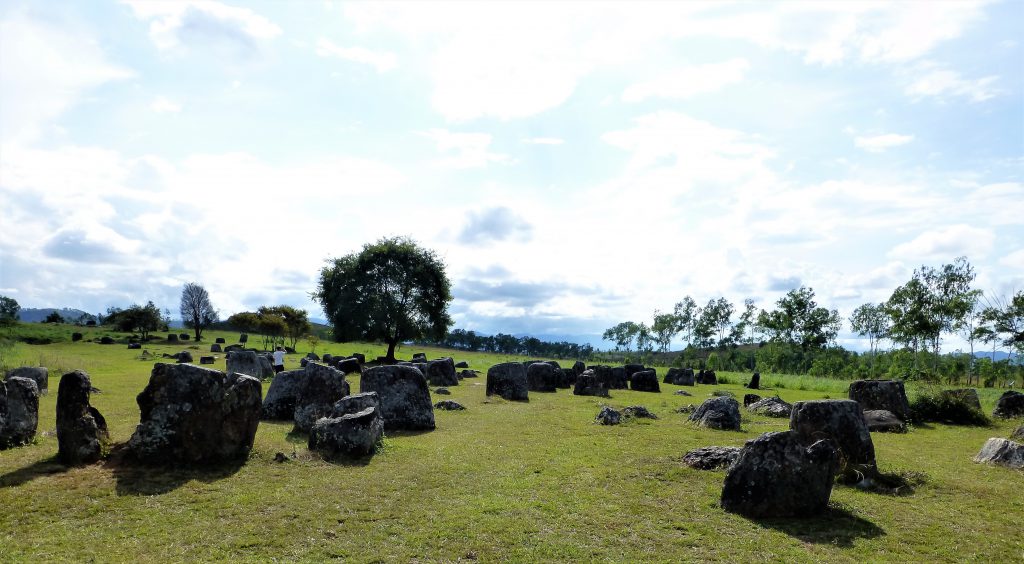 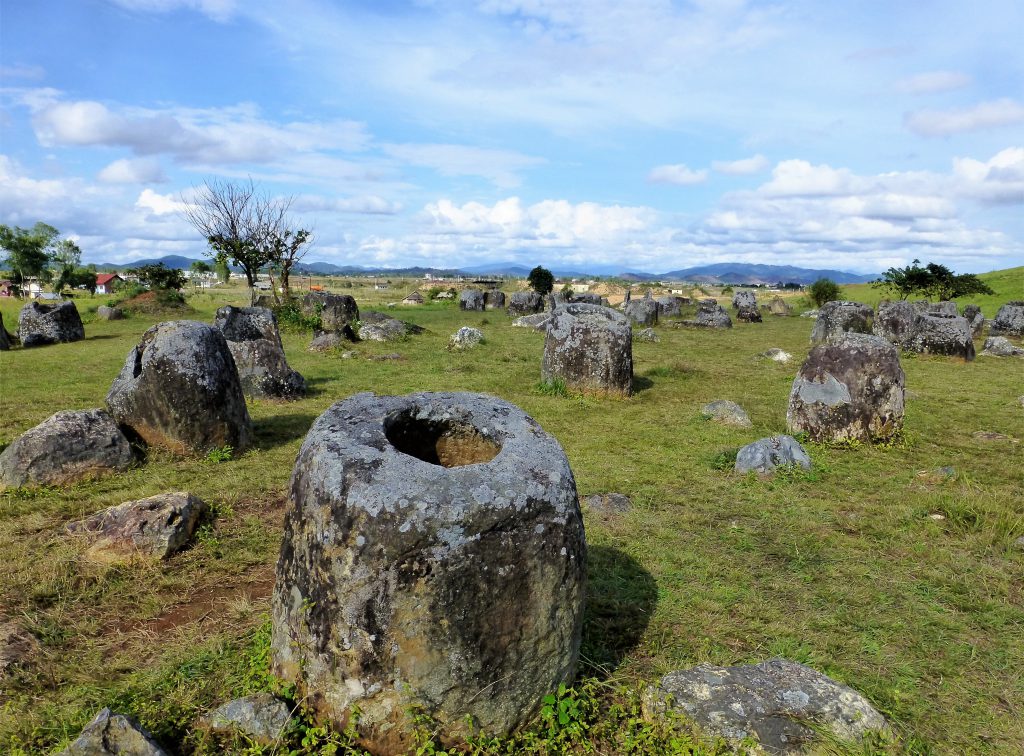 In the background you see some buildings and other recourses. They build an airport over there. It is because of the tourism in that area but they unfortunately build it in sight of the main tourist attraction..
Booking a trip:
As soon as you enter the village by bus or by plane you will be spoken to by guides that offer you trips. Make sure not to book immediatly but let them come by your hostel/hotel later that evening. That was my luck because at that time I had spoken to an Belgium couple who ofcourse were there for the same reason and we booked together. For me so much nicer…not going alone on a trip and it saves a lot of money!! They will try to let you book alone and don’t want you to combine with other touritst. This is my experience back in 2012.
Surroudings:
In Phonsavan I ate at Bamboozle, very nice and good restaurant. It has WiFi, I think that does it for me. But the food was great also!! You can sit on chairs with tables ofcourse…but also lounge at the lounge area which is very relaxing!!
This restaurant was located across the street from the Nice Guest House where I stayed two nights. Didn’t use the shower there, bathroom was to small. Bed was good!! I am happy to went there although it was 8 hours by bus from Luang Prabang.

Do you consider of visiting? Pin this trip!! 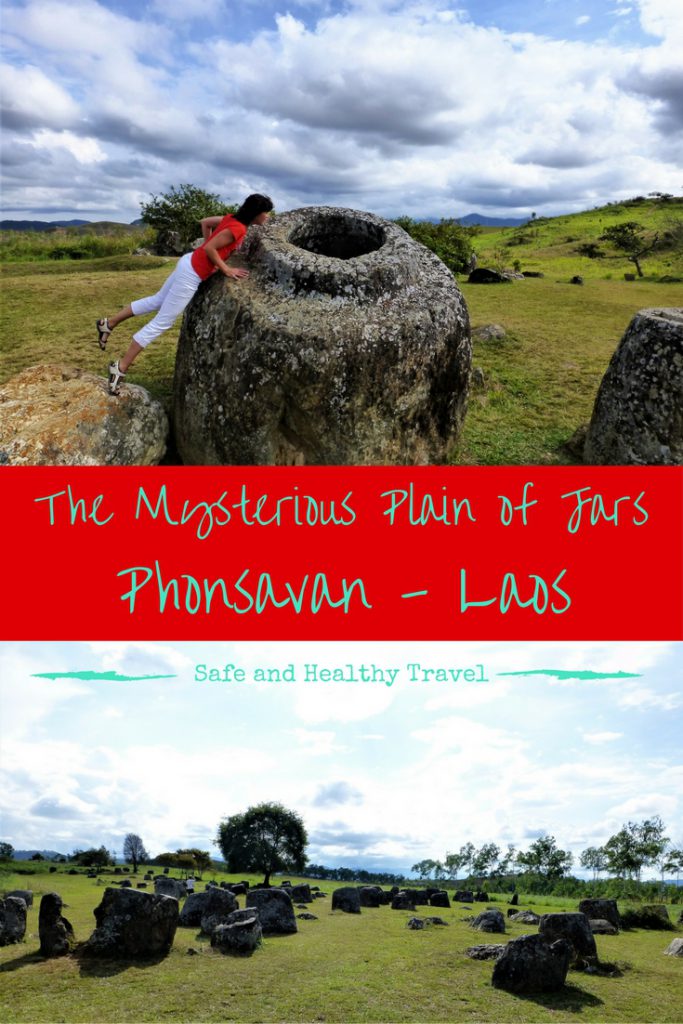 Are you curious about other travels too?

Or go exploring other countries in SE Asia

Or can you use some inspiration?