So I finally bought a big statue!

I always wanted to have a Buddha statue, not the small onces you see in the shops in Holland. Not that I don’t like those….because I do have some 🙂 But I wanted a statue that I found in India, that would be my ultimate travel souvenir… If you can call it that.

Finally the time was there to buy one!! Last january/february I was in India and when I visited Jodhpur I saw statues that I really liked. There had gemstones on them, they were colourful! The gemstones were green and red and sometimes I did see blue ones. Well I went to the shop a couple of times and looked at it and was hesitating. And well….then you travel on..

I didn’t bought it… but it kept bugging me. I really liked that kind of statue. I didn’t see them a lot but when you search for it you will find ofcourse.

At some point, already 2 weeks later, I was in the procince of Kerala and visited Cochin. What a great place, I was there during a festivity at a temple. The festivity was because of the start of spring and I stayed near the temple so every evening I enjoyed the many colourful traditions with a lot of music, a lot of elephants and so many fireworks!! 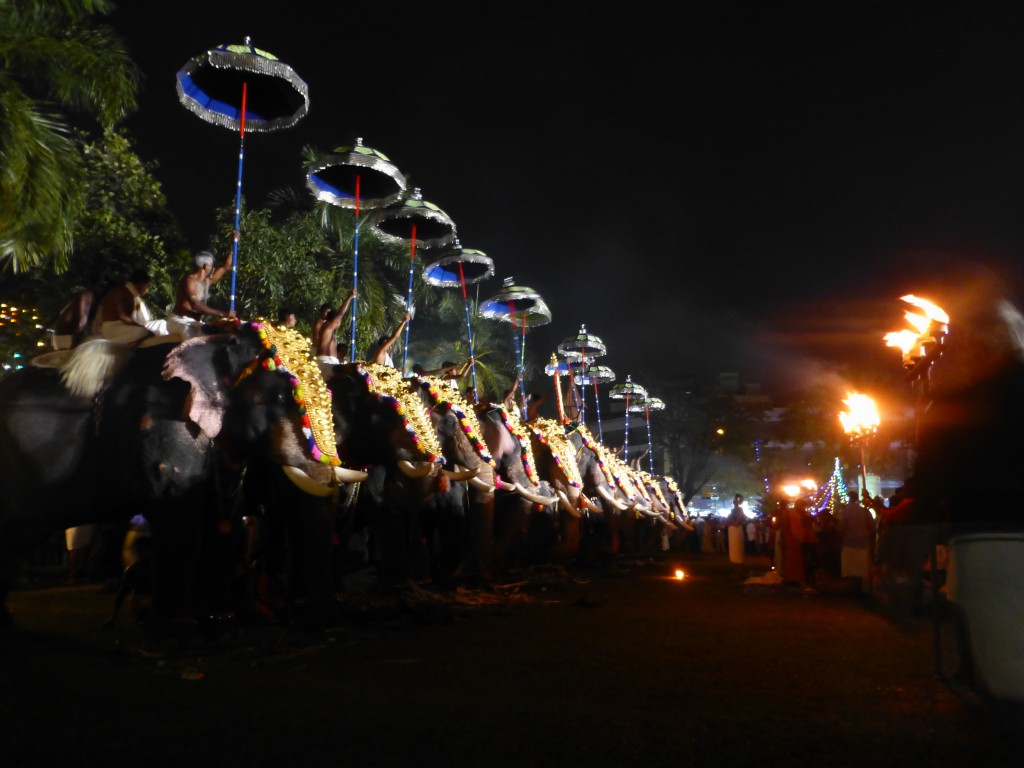 But on a trip to old town of Cochin my driver brought me to a Gallery.

And there I saw my Buddha!!

It was a statue, not that big…but not the torso kind of statue I was looking at. But this one just spoke to me. I really liked the way it looked at me. The colours were great, it was sitting there straight up. This was the one. This was my ultimate travel souvenir.

After negotiating for a while….I bought this one!! 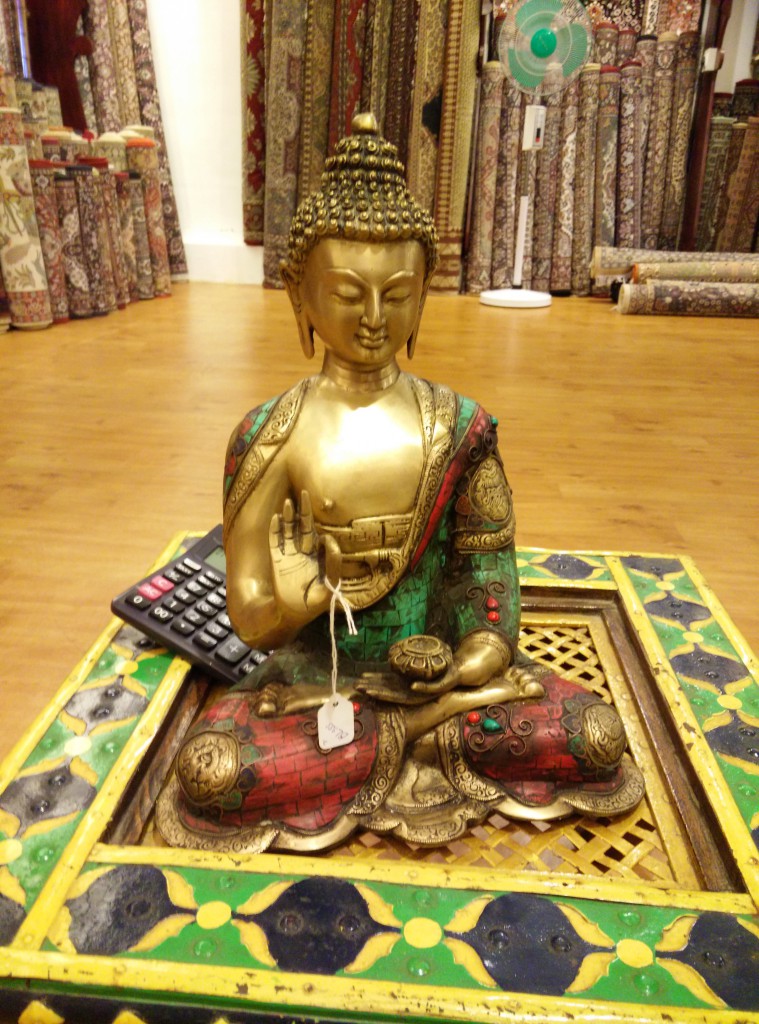 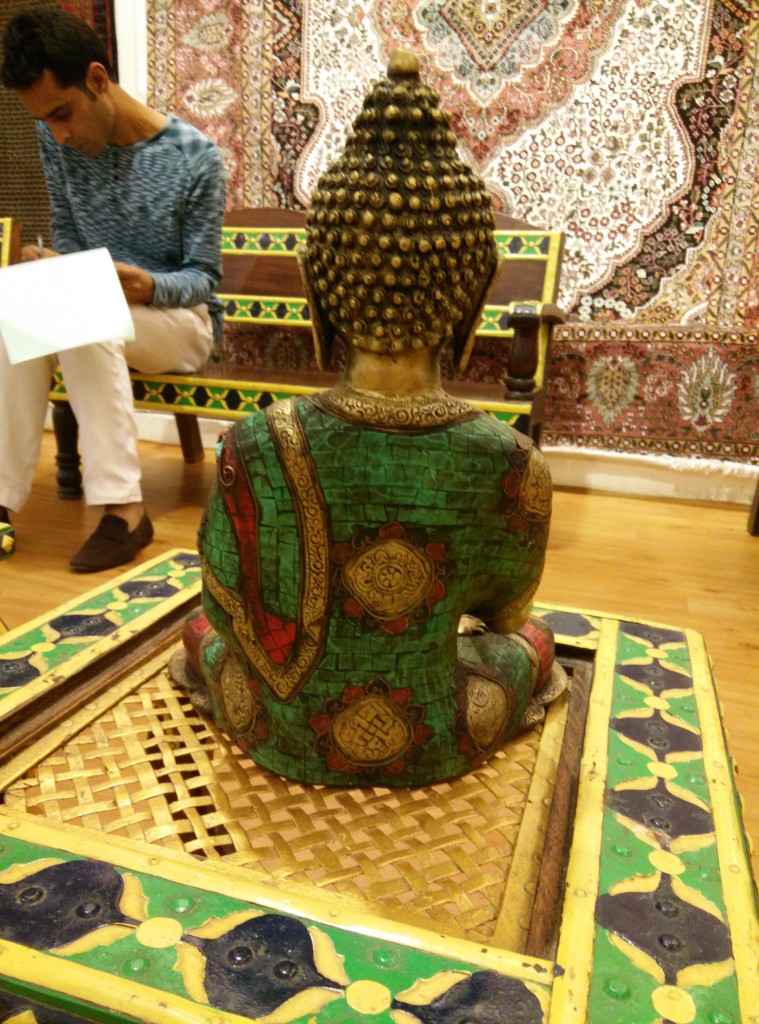 And then it started. Buddha had to come to Holland. They would send it with FedEx and it would be at my house the day after I would be back from India. I was so excited! That day I also got a sideboard I bought before I went to India. The best part of that sideboard is that it originally comes from India too!! So they were made for eachother!!

The perfect spot for my Buddha 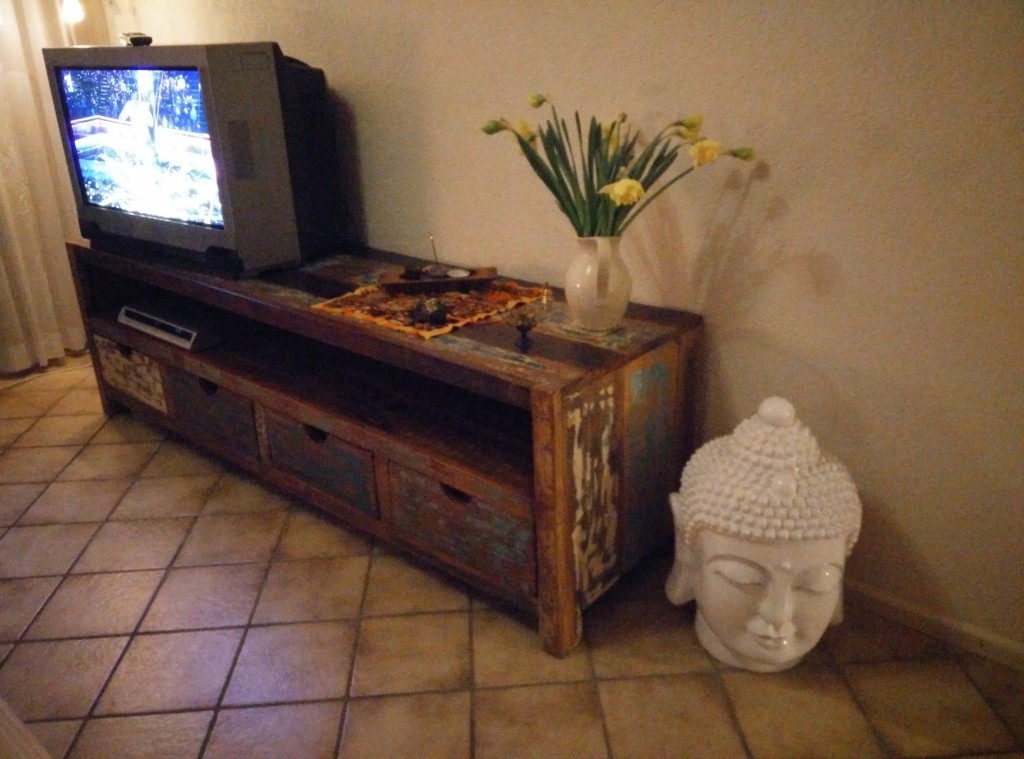 Well…that day I didn’t got a package. I wrote an email to the Gallery and they told me that they didn’t send it yet because the government needed to give a archeological certificate for it to be released. They hadn’t done this earlier because of a wedding they attended. Well that’s Asia..all in time when it is needed…for them 🙂

A week later I emailed again. They told me that it was send and gave me the track & trace code to see where my Buddha was. I was so happy with that!! I was getting worried about it…I had already paid ofcourse but didn’t got anything. But it was on its way!! 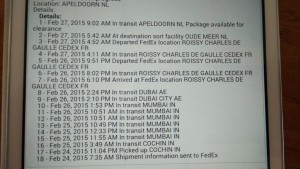 When I looked I saw it had been shipped to Mumbai and already was in Dubai!! A couple of hours later it was in Paris and the next day it had entered Holland. It was in an town near my place called Apeldoorn.

But then I saw it wasn’t getting through customs. There was a problem!! So I called and they told me that the package had papers with it that they questioned. On the papers the value was 30 Dollar. It was a heavy package and they didn’t trust that. I told them what I paid for it and I hoped that the content was the Buddha statue I bought and so a bit more expensive then 30 dollar 🙂

My Ultimate Travel Souvenir was getting close!!

I got an emailadress to send my receipt to proof the value. So I did. With a picture I took of the statue in the Gallery. An hour later I saw the status changing into released and ready for transport!! Yes! My ultimate travel souvenir got through and was on its way home!! 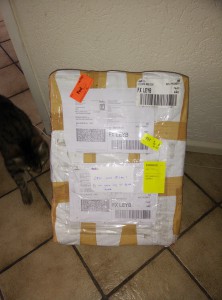 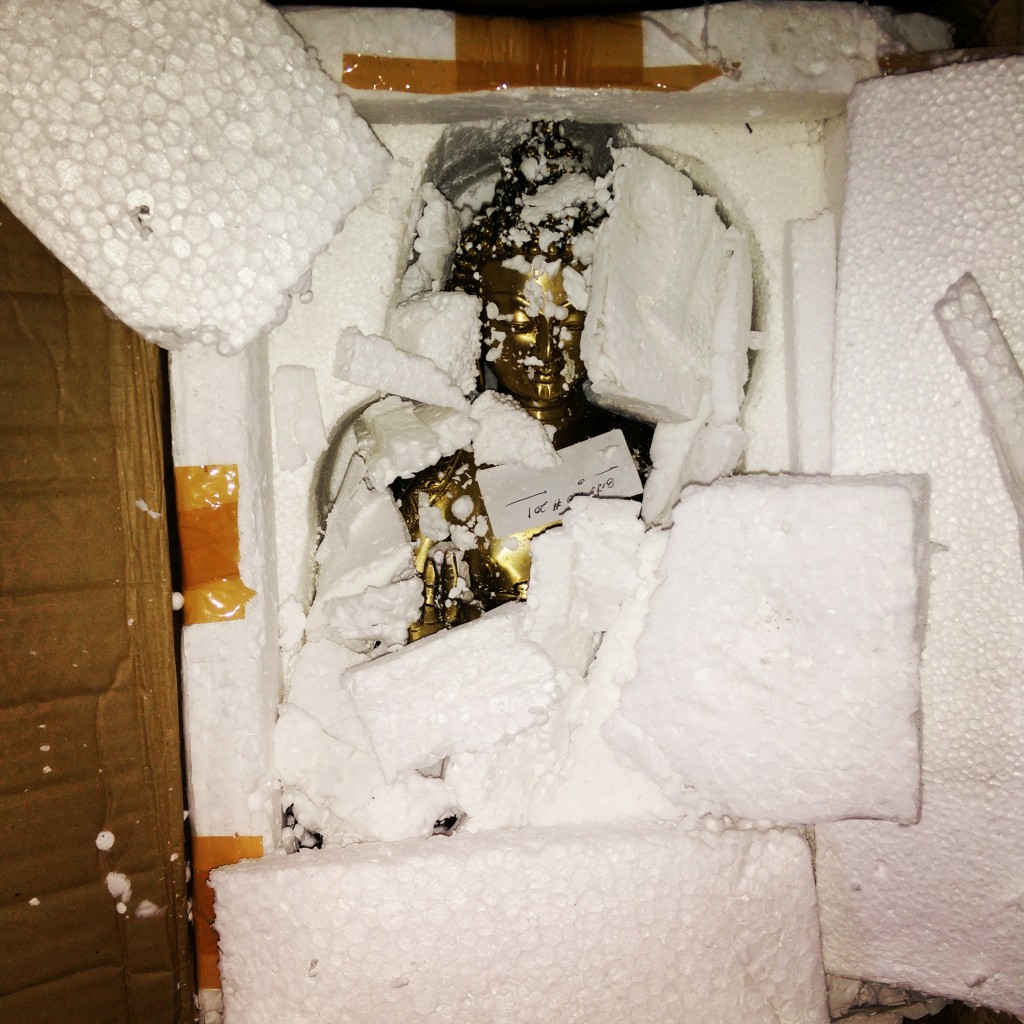 A day later I had my Buddha!!!
So happy with it!! It has a great place on my new sideboard, also from India!! 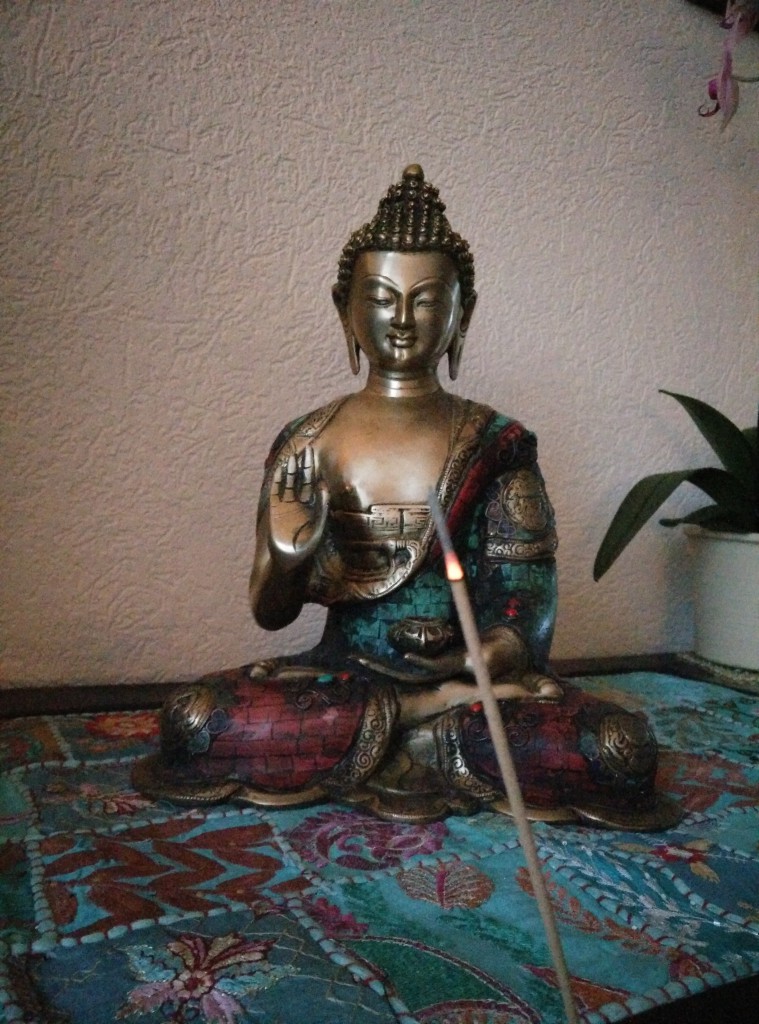 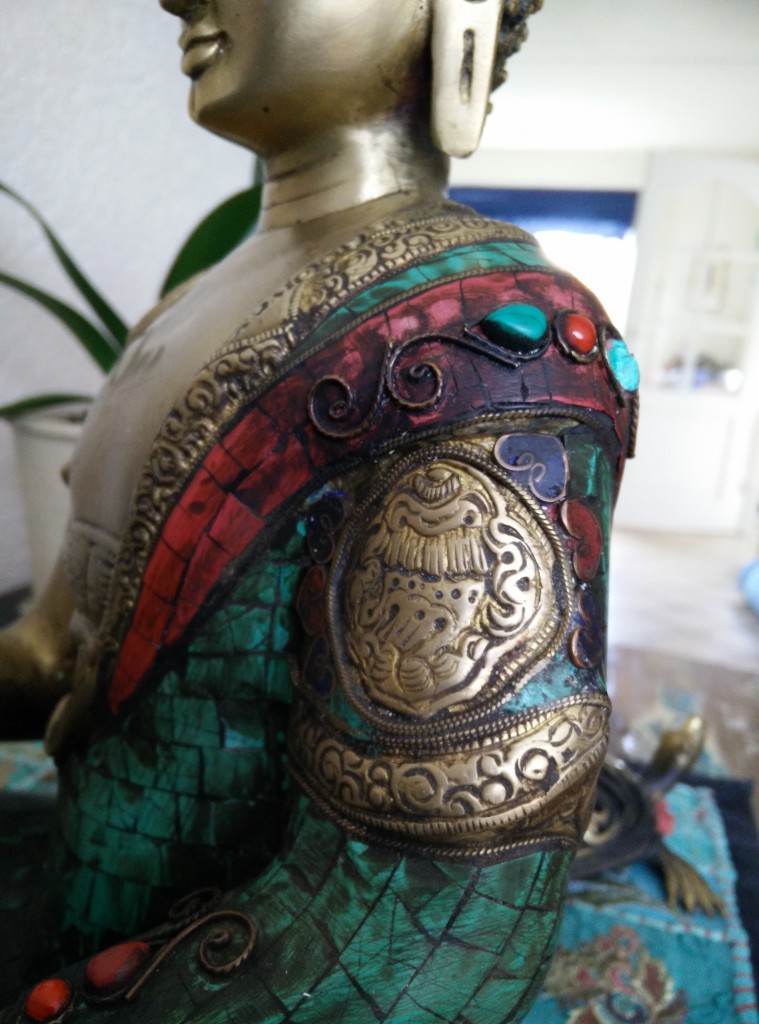 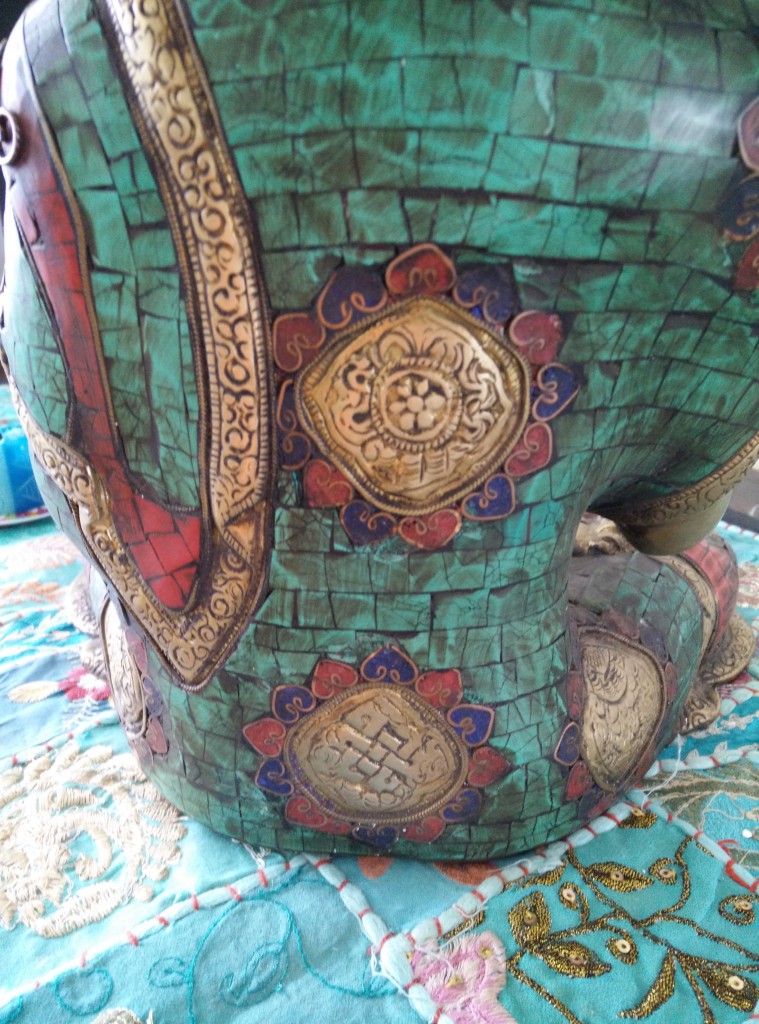 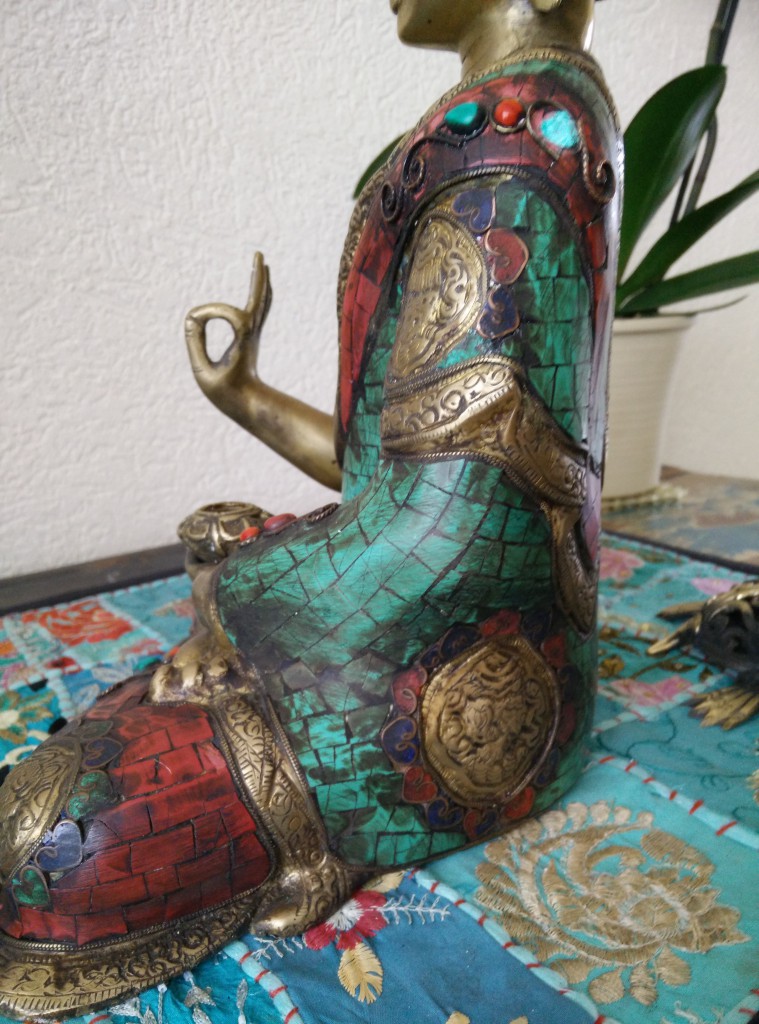 Don’t you just love those details?

I love my ultimate travel souvenir and I don’t think any other souvenir can top this ever!!

Enjoy this Moment! Path to Happiness

Give your travel an extra Dimension: Contact with Locals

Read about the Lessons I Learned Before!!

Lessons I learned before – Vipassana