I was off for a couple of days … and had the opportunity to take my dad’s camper. So I went on a Roadtrip! On an earlier trip with a camper I went to France and last year I went to Bruges, Belgium and Kinderdijk, The Netherlands… So it would be Germany this time!!

I had seen some options untill someone pointed out Monschau, would be a really cute city and the surrounding area would be great too! I started to roam the internet and soon it was clear..

I went to Monschau, it is such beautiful city!! A roadtrip in National Park Eifel it would be this time!!

So after my last nightshift I put the clock on 2pm and made sure to be ready to go when awake. I only had to get the camper at my dads and off I went around 4pm. Around 7pm I was in National Park Eifel and I was having dinner in Monschau!! I love living in Europe for that reason too!! Isn’t that great?

I already made a choice online to which camperspot I would go and it was a small camping just outside Monschau, Perlenau. I booked 2 nights and cycled into the picturesque city of Monschau. I came cycling in to the old part of the city and it really felt like stepping back in to time. It was just like it must have been in the middle ages.

I loved this place! 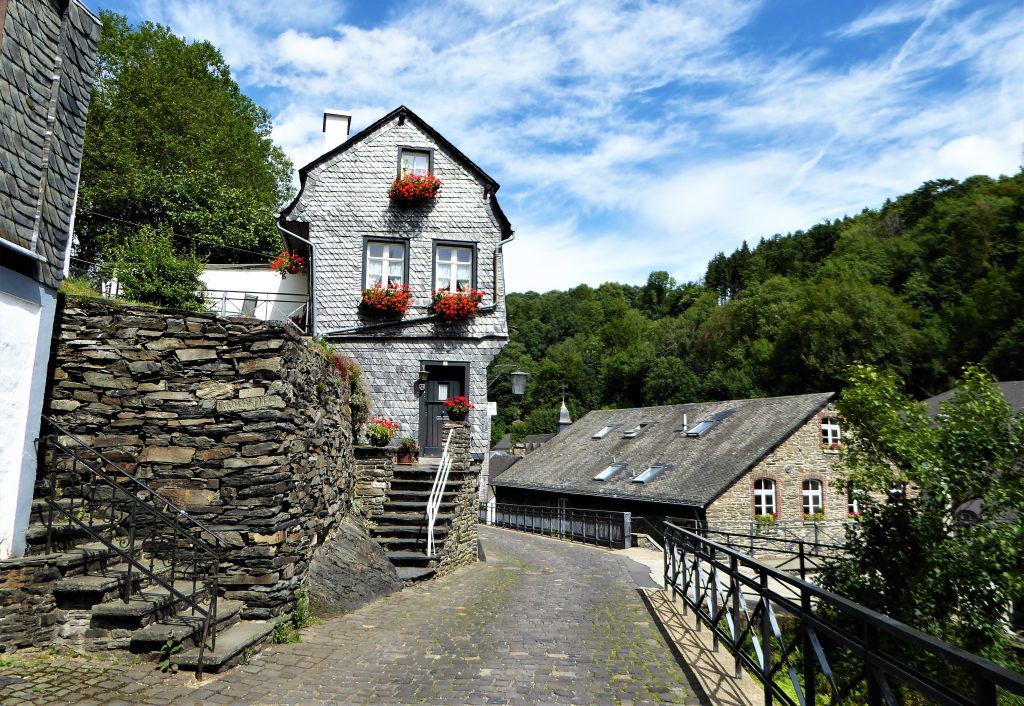 I really love these kind of places!

The next day I started to walk around. I saw a sign Panoramaweg and that is enough for me to lure me in. I love a great view over a city!! And when your in a city like Monschau you just HAVE to get that view!! There were some small alleyways leading us along those great old houses and up into a nature surrounding and a spot from where you had a great view over the valley. The valley where Monschau was located. 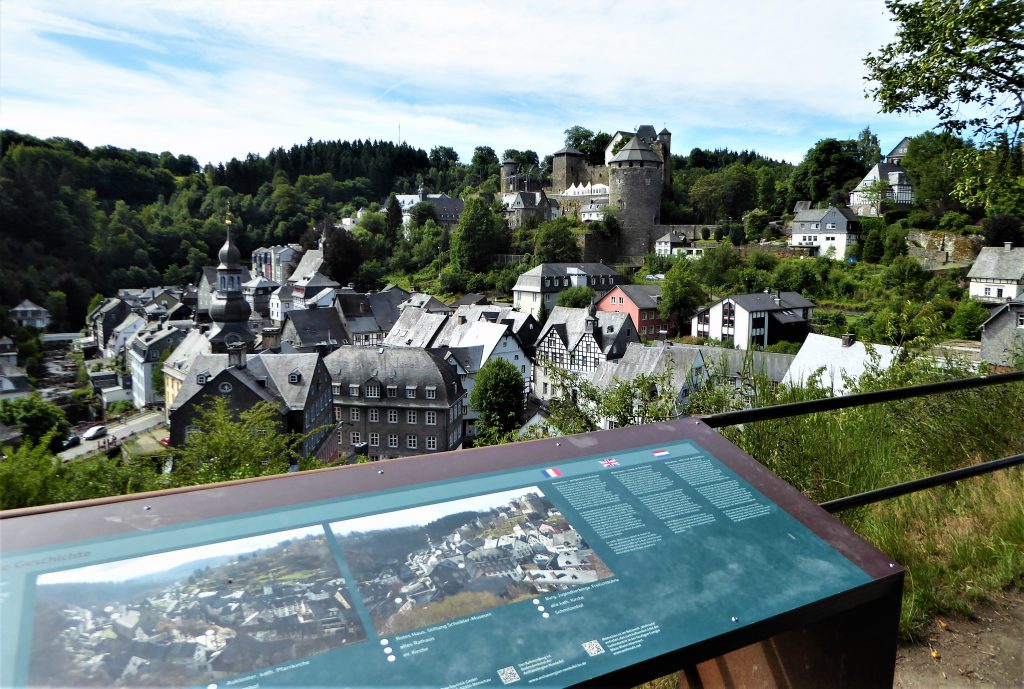 At the opposite side you see the castle, later on I would visit that too ofcourse! First I wanted to get higher, I saw a leftover of a castle or viewingpoint of medieval heritage. And from there was a great view again.

The path seemed to go on. So I went on too and it went into the forest and away from the city and at some point I came along some meadows and I got the feeling I walked back to Perlenau. So I turned and went back. Unfortunately my knee was still hurting from the Nijmeegse Vierdaagse which I walked shortly before. I had walked to much already. 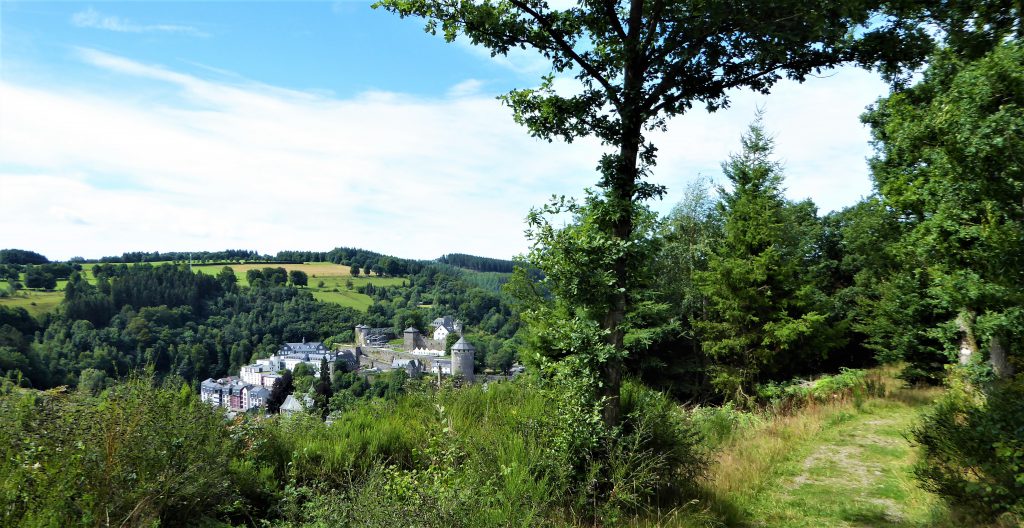 So when you walk through the city in search for that great castle you enter the most beautiful streets and see houses as if it was still… I don’t know… around 1700 .. The old city is just a small area but it is worth walking all the small streets which are so photogenic!! I loved just wandering around!

One day was enough in the great city of Monschau and on the back of the camper is a cycle so I was able to go cycling the area. Soon I found myself cycling on the Vennbahnradweg. When you are in the Eifel you are bound to see this path! It stretches over 125K through the Eifel. I started to cycle a piece of the way and soon I read about the heritage of this path on the big sign along this path. 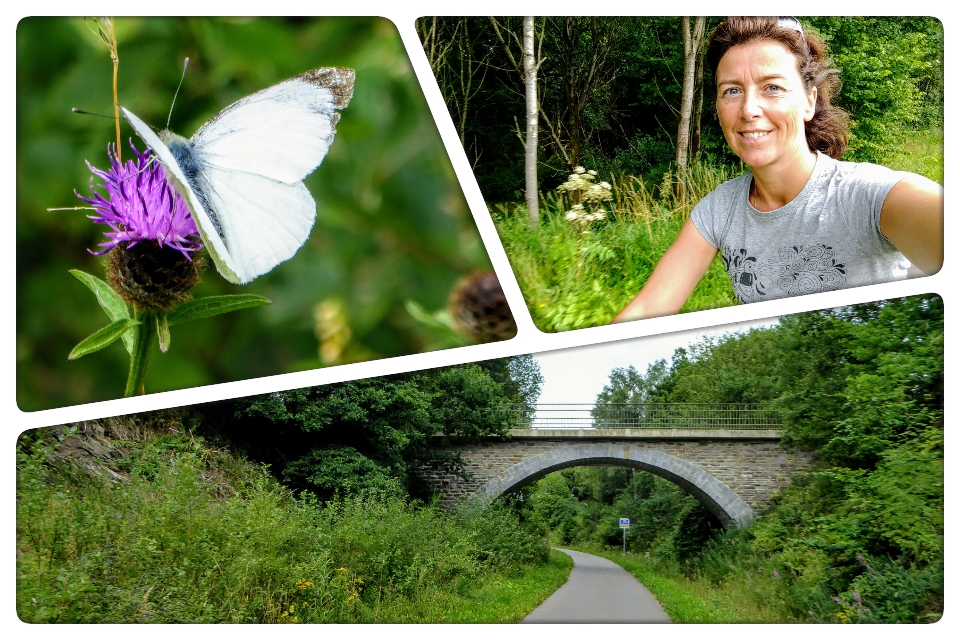 In the old days this was an important railway for supplying the area, it was ofcourse no cyclepath but a railway. It was very interesting to see what they were all carrying…who was using this path and in what different times different goods were transported. But also in the second world war it was used as a smuggle route to transport coffee and other goods.

That second day I woke up and the rain was ticking on my camper roof.. I didn’t like that!! I ordered 2 fresh breads and got those at the front desk / shop of the camping. With the door almost closed I ate the German bread with a hot coffee.  Did you know that German bread is the best? 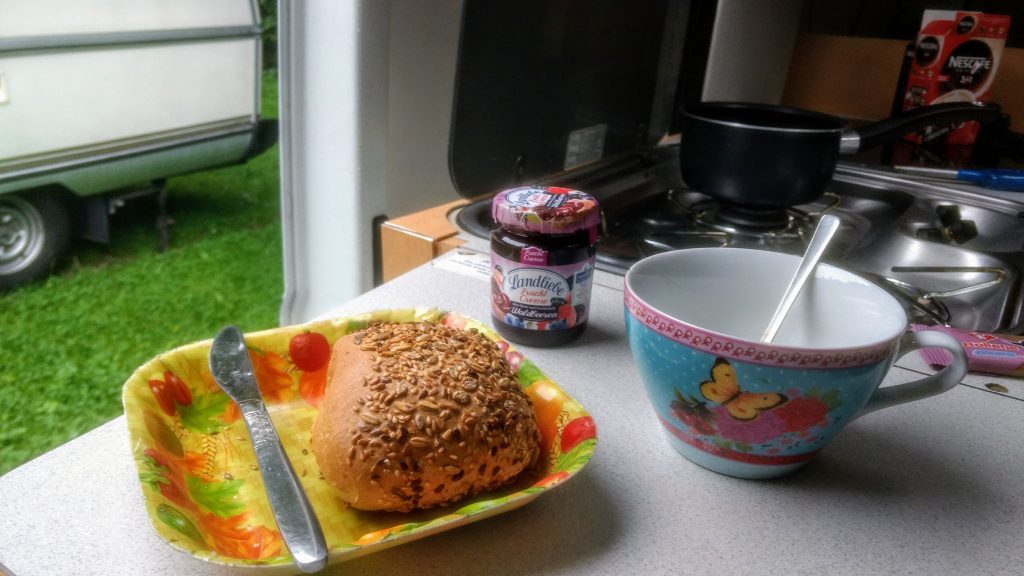 Soon it was clear, I was going to leave this place. I would go to a new place with, hopefully, some sun!! A bit closer to The Netherlands. When I was googling the area Stolberg seemed like a good option. It was called Coppercity and would have a long history so enough to see. Making sure everything was set in the camper, nothing loose and able to move while driving and off I went!

I love that about traveling with a camper too!!

When I entered Stolberg I saw this wonderful castle!! Looking for a camperspot I lost it and eventually, after asking a parking guard I parked my camper at the musea Zinkhutter Hof. A great building, an old industrial area and I do think really worth the visit! But I wanted to go that beautiful castle I started to cycle down to the city centre again. But it took me really long to see it again.

First it was time to get a nice lunch!! After lunch I started to cycle again and at some point I just put on my phone and looked up the adress and put it in the navigation. That is so strange…most of the time I do find my way around…even though I haven’t been somewhere before… 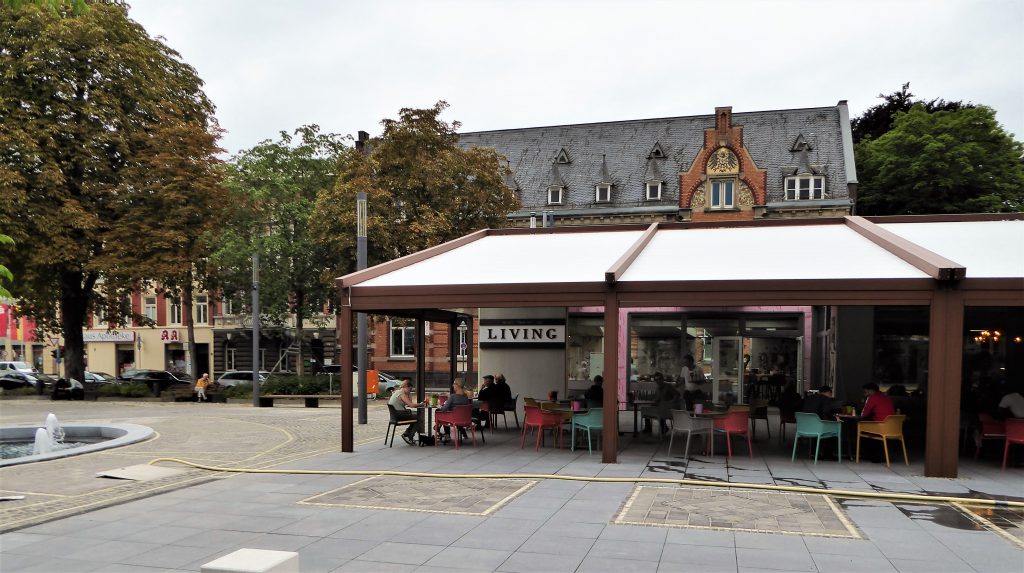 But when I finally found the castle I was so surprised by the beauty of it!! There was a church attached to it, a couple of other buildings….and it is all free for visiting!! In the main area they have a restaurant and the other doors are open to walk through. At first it felt strange, there was nobody to lead me there…I just starting walking. I saw an exhibition so I knew it was meant for me to be walking there. I really liked it, just trying all the doors and most of them were open….and not all were for visitors 🙂 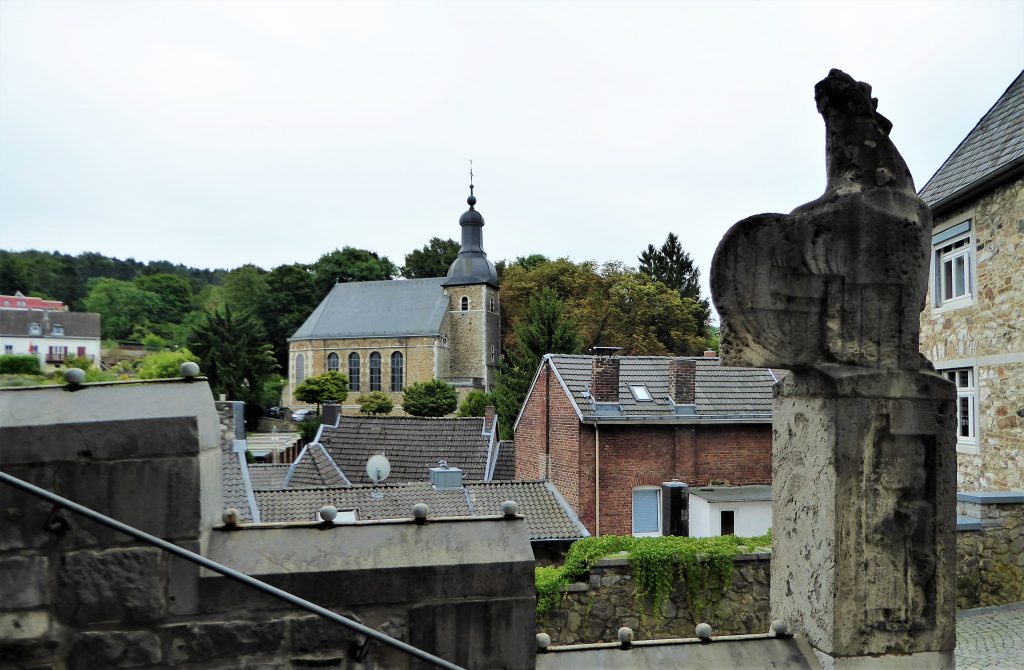 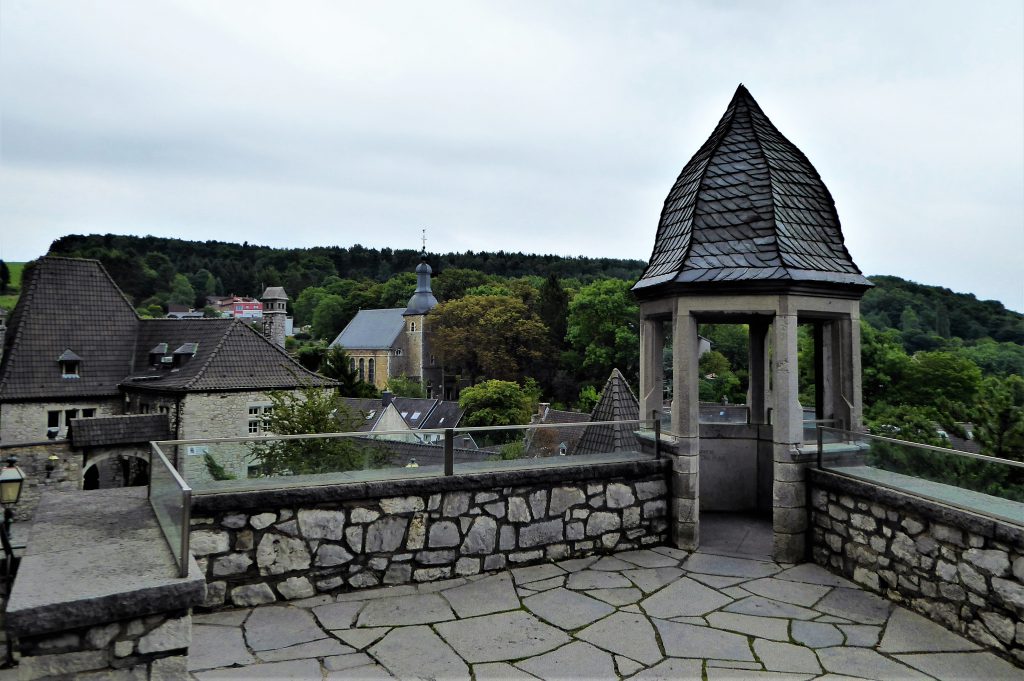 It is not a real museum yet but what they have put there is really nicely put there so you have a feeling of the life they used to have here. The views are great ofcourse from high of those walls and so worth the wandering around by yourself! 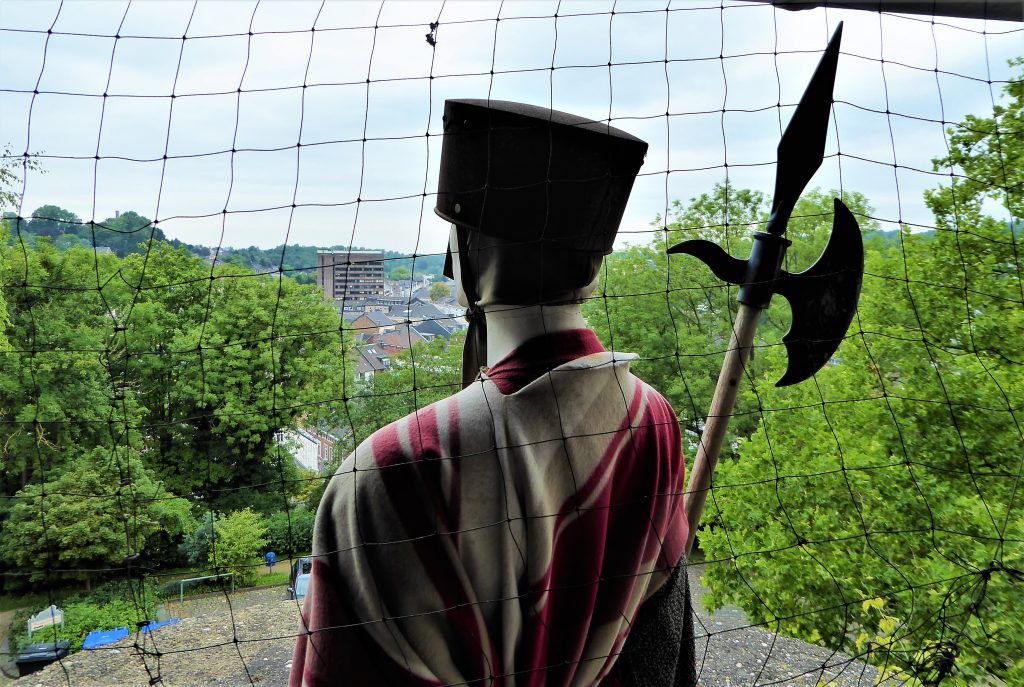 When I got out on the other side I entered an area that seemed as if it was still the middle ages!! Really a nice part of town, totally in style of the castle! So cool!! 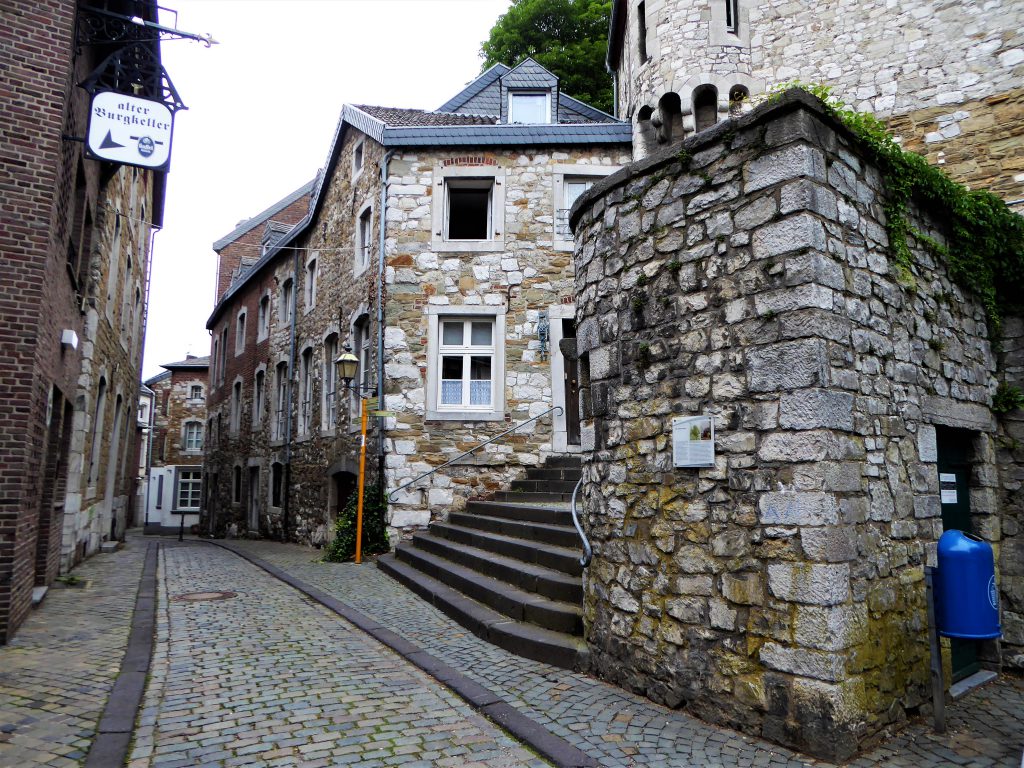 But because I couldn’t find a camperplace I left Stolberg after my great visit to the castle. I went to the city of Aachen. It was a drive of less then a half an hour and so I could be there before my evening dinner!!

In Aachen I found this camperplace on the internet. Also a toilet and shower included, I do like that. There were even people standing there with a caravan. I really like to stand close to other travelers at night, so you can look out for eachother. Also for safety ofcourse!! I paid 17 euro for a night. You’ve got electricity, water and toilet & shower. 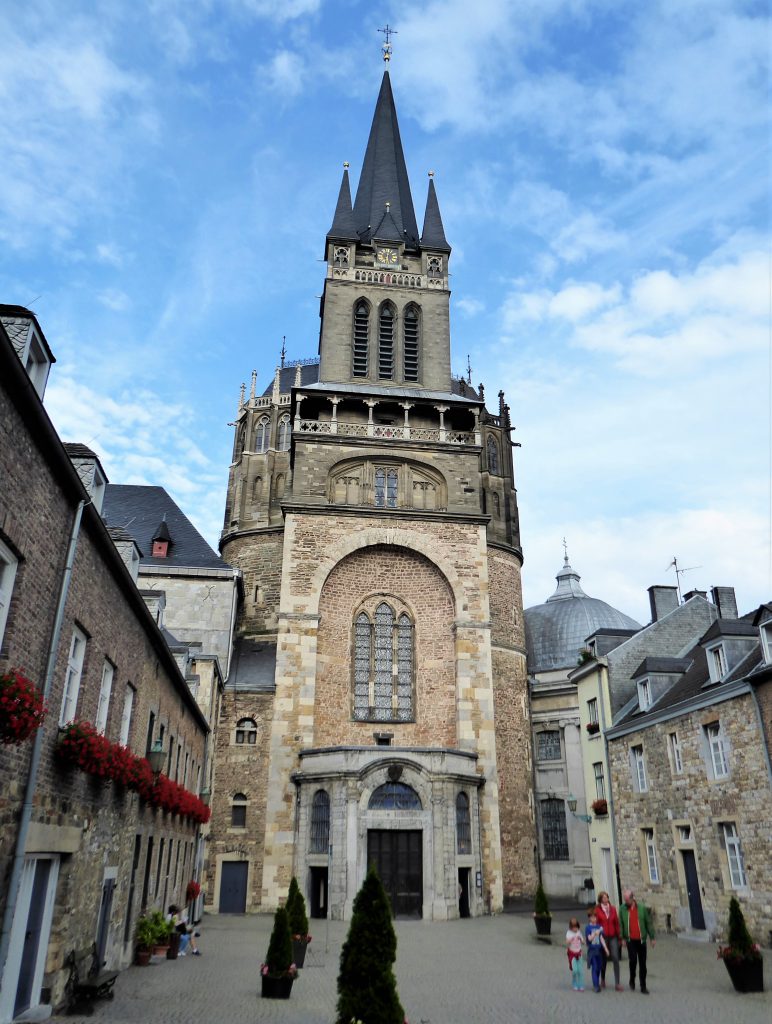 The Cathedral of Aachen

As soon as I was installed I went into the city, it was around 10 minutes cycling. I was just before closing time in the citycentre I went in to that great cathedral!! The round part of the cathedral is free for visiting and if you want to make some pics they ask for one euro. You have to pay that by yourself, they don’t ask you for it. After this I had some great German food with a view on this cathedral. 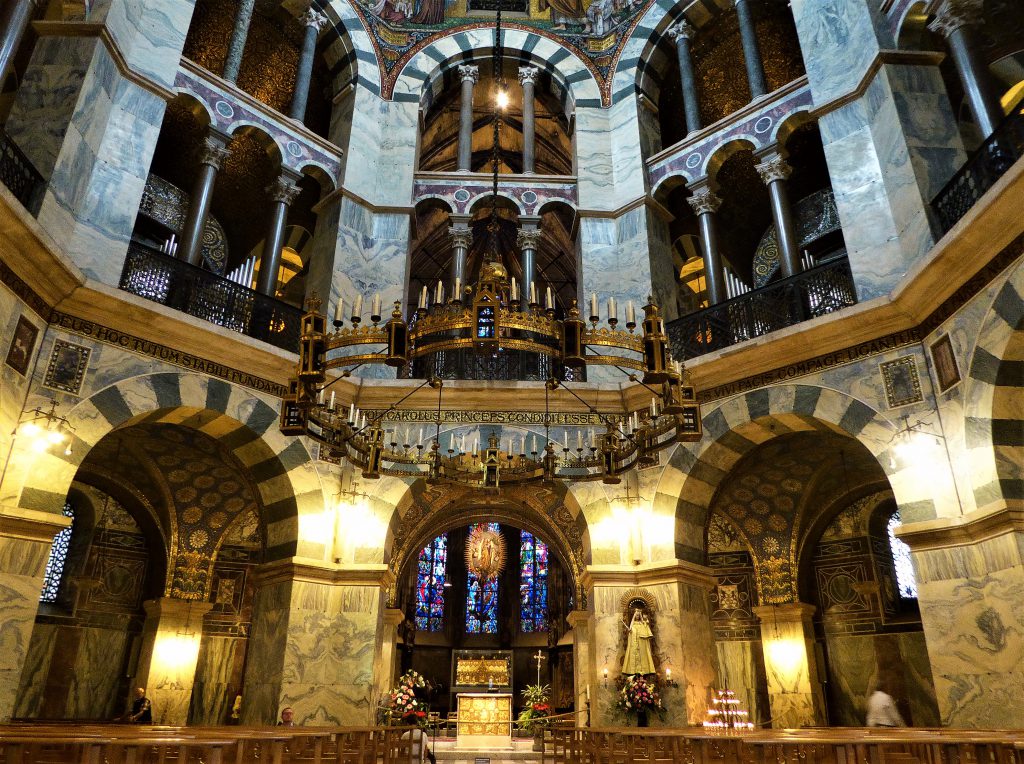 The next day I took a tour in the cathedral in hope of getting a great view over the city….but the tour doesn’t goes any higher then the second floor. It costs 4 euro and they will have every couple of hours a tour in English. We did went pass the first passage and went up to see the throne of Karel the Great. It is a simple throne and not one build to show off with… and I don’t think it was a nice throne to sit on.. It was made of marble.. 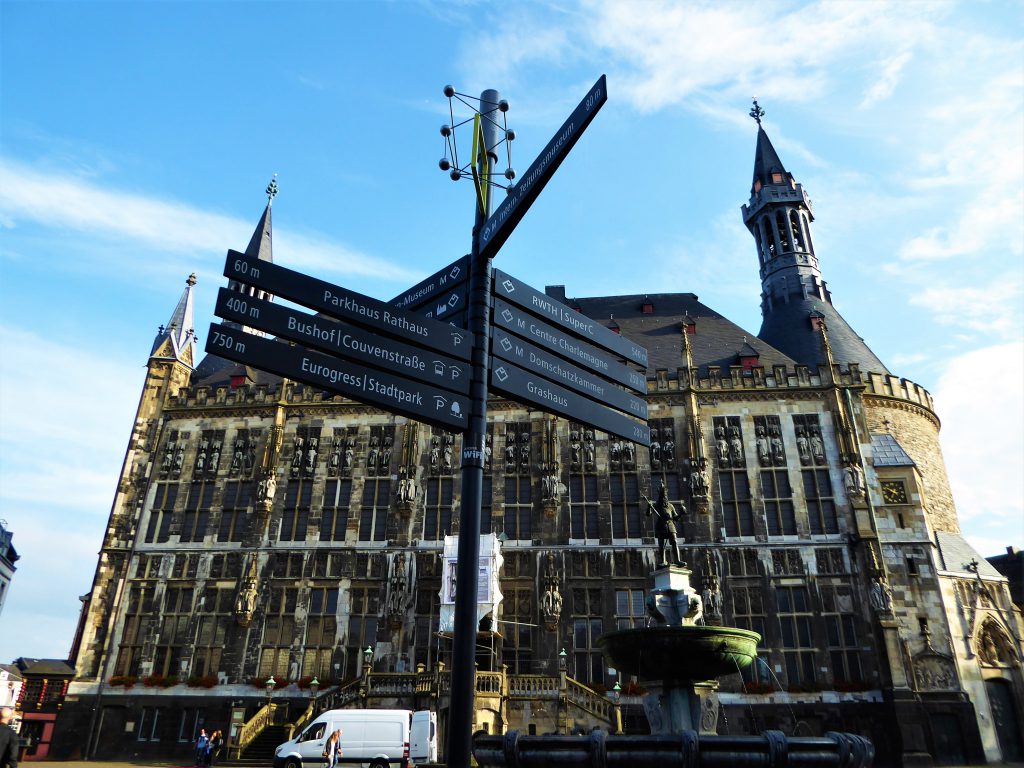 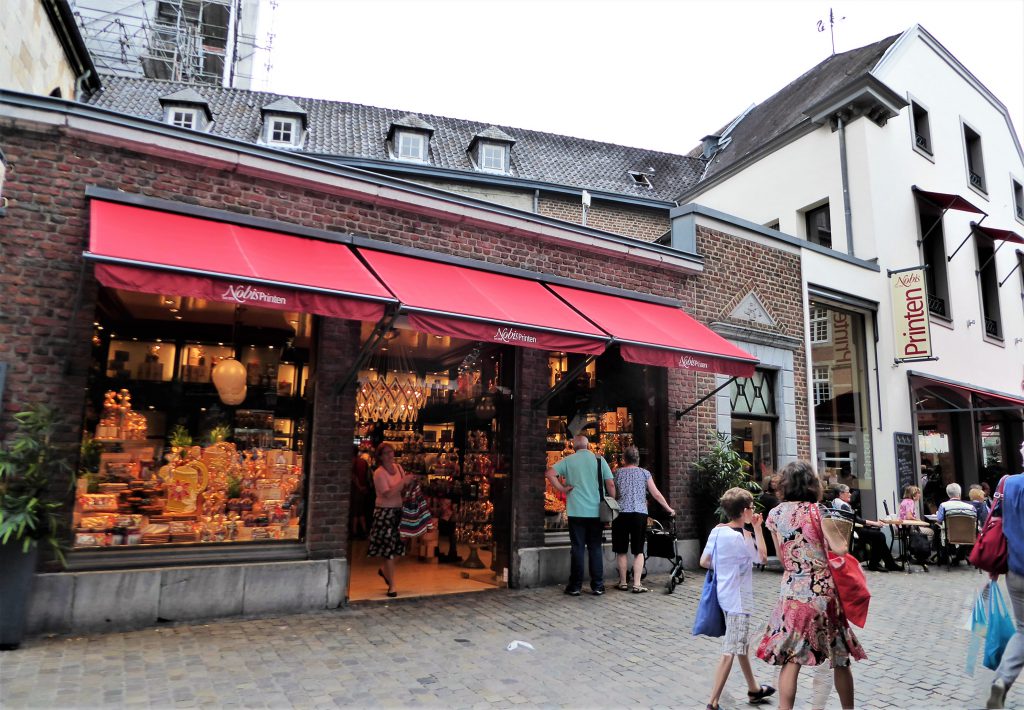 Nobis, a shop to buy the famous Aachener Printen ( a cooky)

The city has a great cityhall: Rathaus, and a theatre, and a couple of nice streets to wander around this city. A lot of shops to do some shopping and as you see above, they have a famous cooky. The Aahener printen.I just bought a small bag of 6 cookies, I’m not the kind of girl to eat a lot of cookies. I rather went eating at Hanswurst on the opposite site, next to the cathedral. I had a great summer salad with ofcourse a Hanswurst in there 🙂 I had my dinner there to the evening before.. With view on the Cathedral!!

That night I had the HansThuringen, it was served with mashed potato and gravy and some red gabbage #delicious 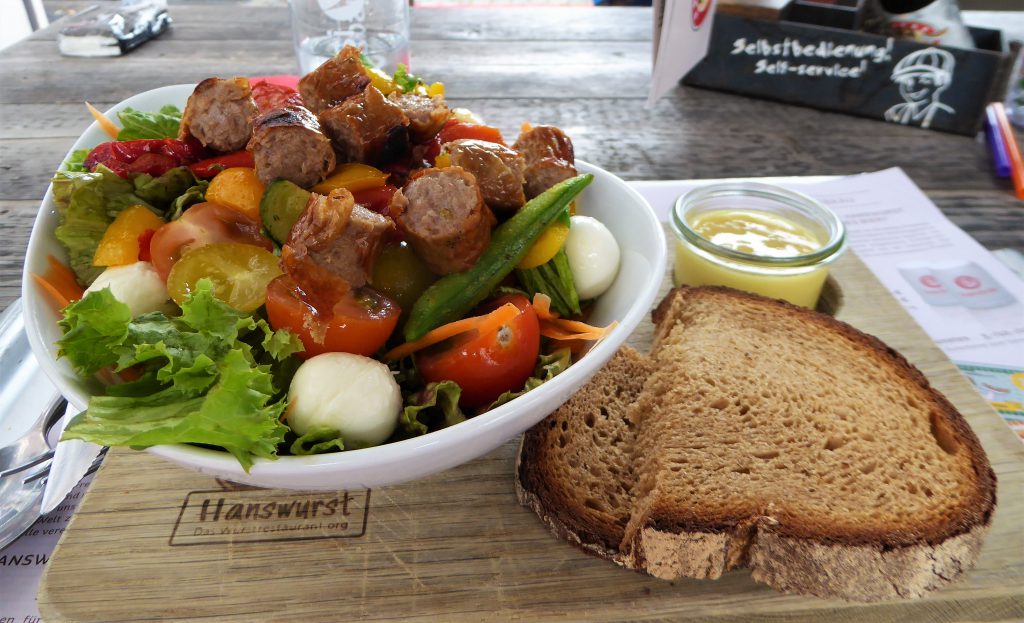 And all good things will end so also at this great short roadtrip through the national park Eifel.. I had only 4 days so I had to go back. I have spend them well did I? Each year I try to go away for some days with the camper of my dad and I do like it!! 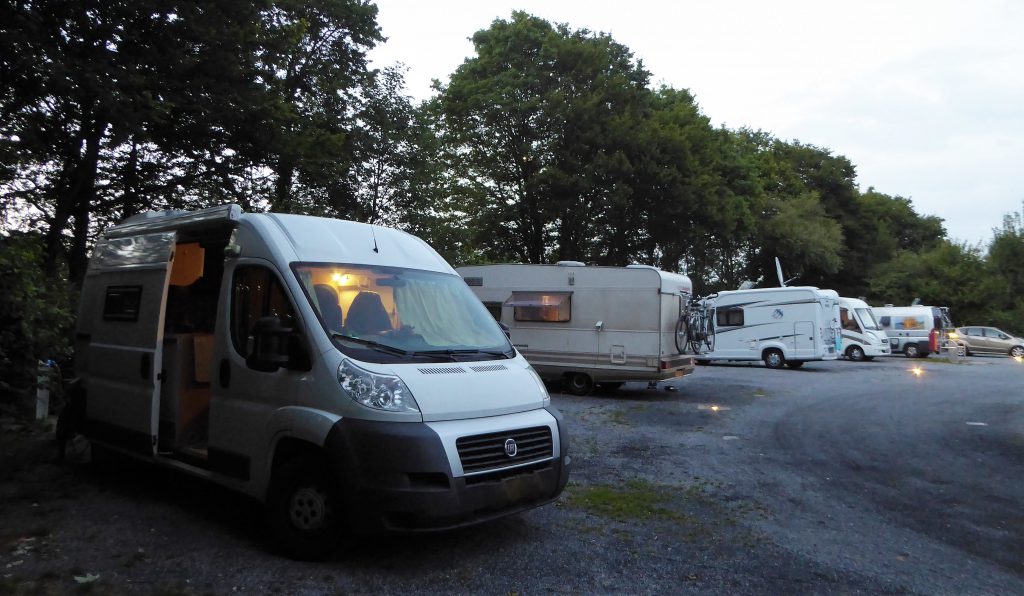 I do keep an extra thing on my to do list… I want to cycle that Vennbahn Radweg, the cycle way that leads you through the National Park Eifel for 125K. It is not too long, if you don’t cycle to fast you can go to some really nice post in the national park Eifel and explore more of the nature that the park can offer!! 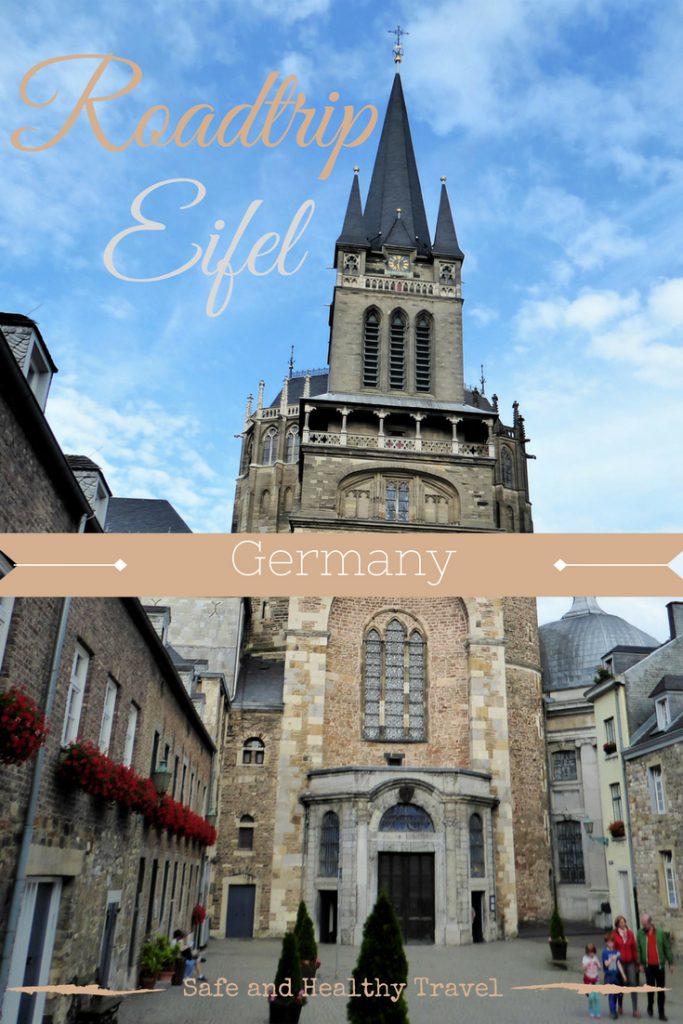 Are you curious where my last roadtrip by camper went to?

I visited Bruges!! I really loved that enchanting place!!

I also visited once the Historical houses of Dunkerque

And the great Kinderdijk!! Just like in the Postcards!!

Or can I inspire you to make the best pics on the best places on this great earth!!