Near Mandalay is the famous U Bein Brigde. It is near the small village of Amapura. The bridge is the longest and oldest teakwood bridge in the world, they say. 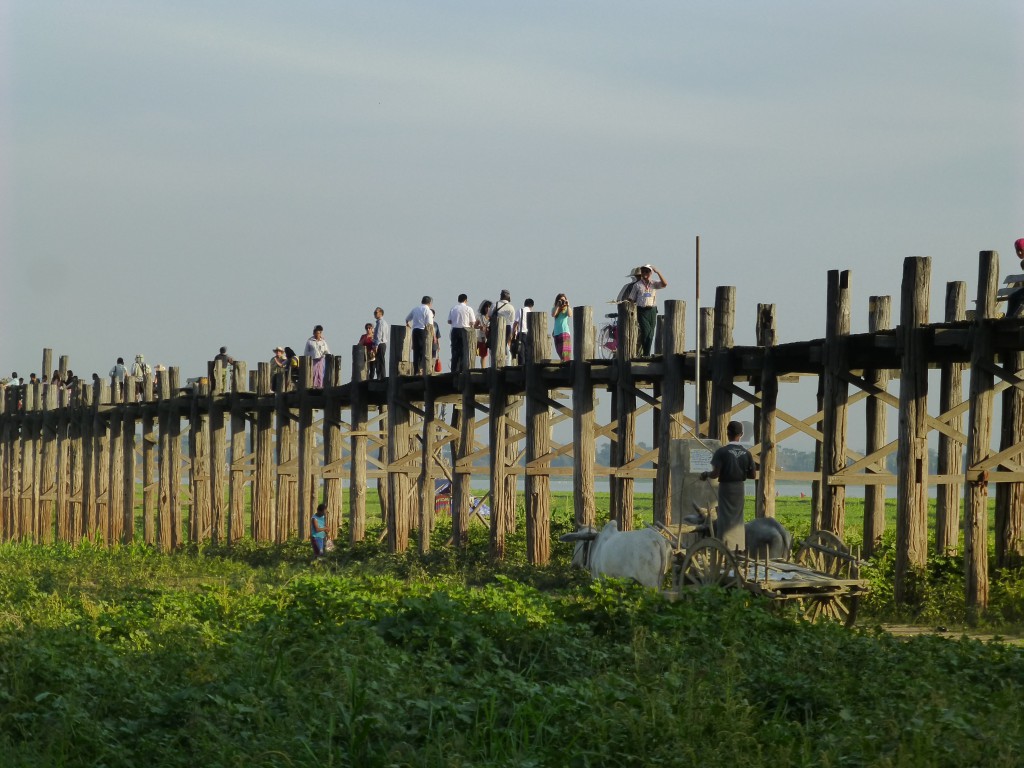 When I was in Mandalay I did a tour with the American Marisa. We both were at the Homestay Peacock Lodge and I overheard here talking with the owner of the place. They were talking about what to visit near Mandalay. I ofcourse asked here what here plans were for the day and she explained that the owner would be here driver for the day. A day touring around Mandalay and its highlights. I asked to join this tour and that was a good idea, now we could share the costs, great!!

This homestay where we were is a real great one, The Peacock Lodge. If you are in Mandalay you should really try to book a room with them. I was lucky and had two different rooms for two nights, first night an expensive one. That one was new and really clean and luxurious. The other night a bit cheaper but still a great, clean and nice room! It is a Homestay so sitting in the garden or on the porch give you that homely feeling. I really liked it! They can arrange things for you, they have an office in the garden 🙂 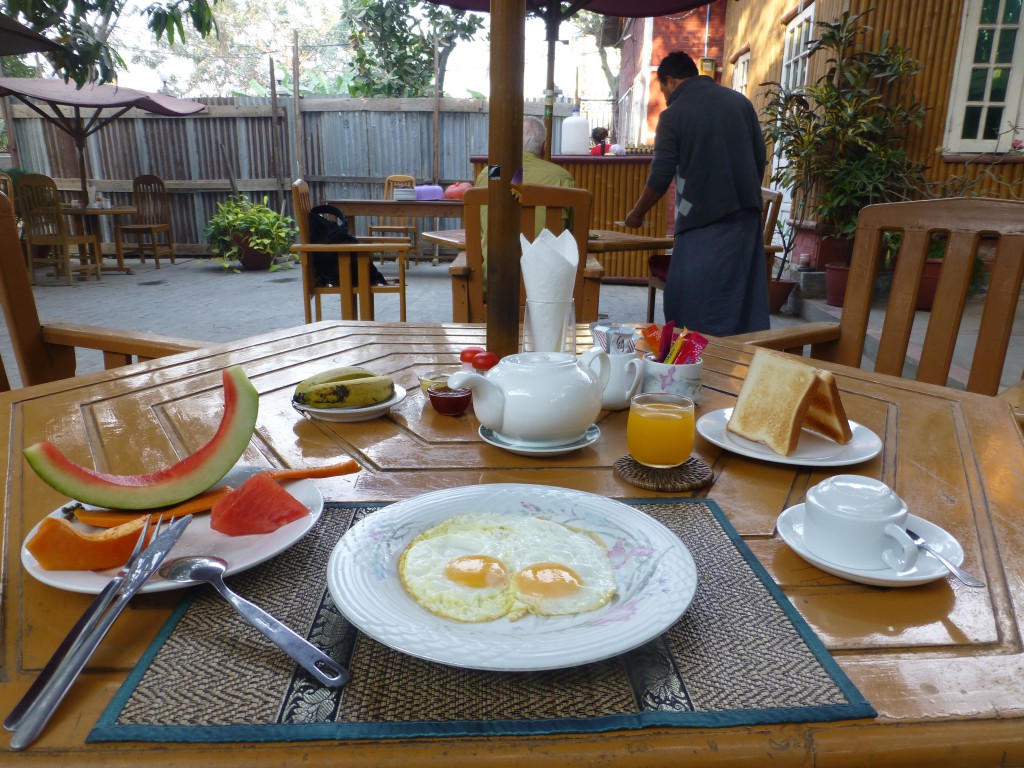 Well, that day we went for sightseeing Mandalay and its surroundings. I could have stayed longer in Mandalay, there were a lot of things that I wanted to see too but my planning didn’t gave me the time. 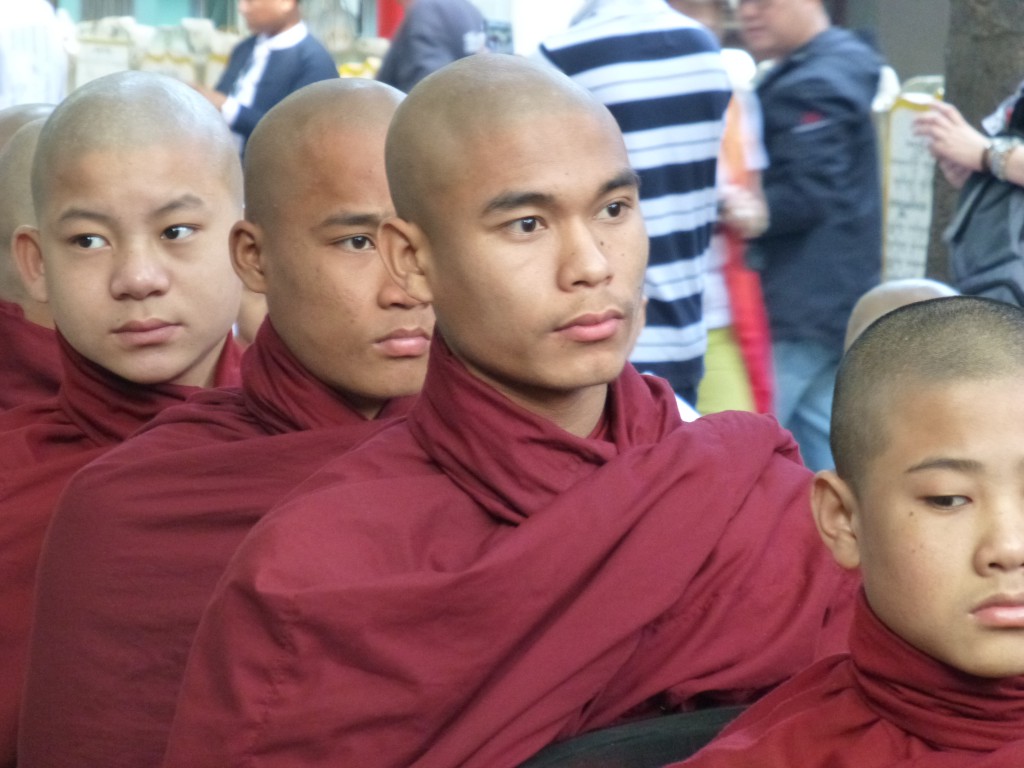 There are many great places to visit in the Mandalay region 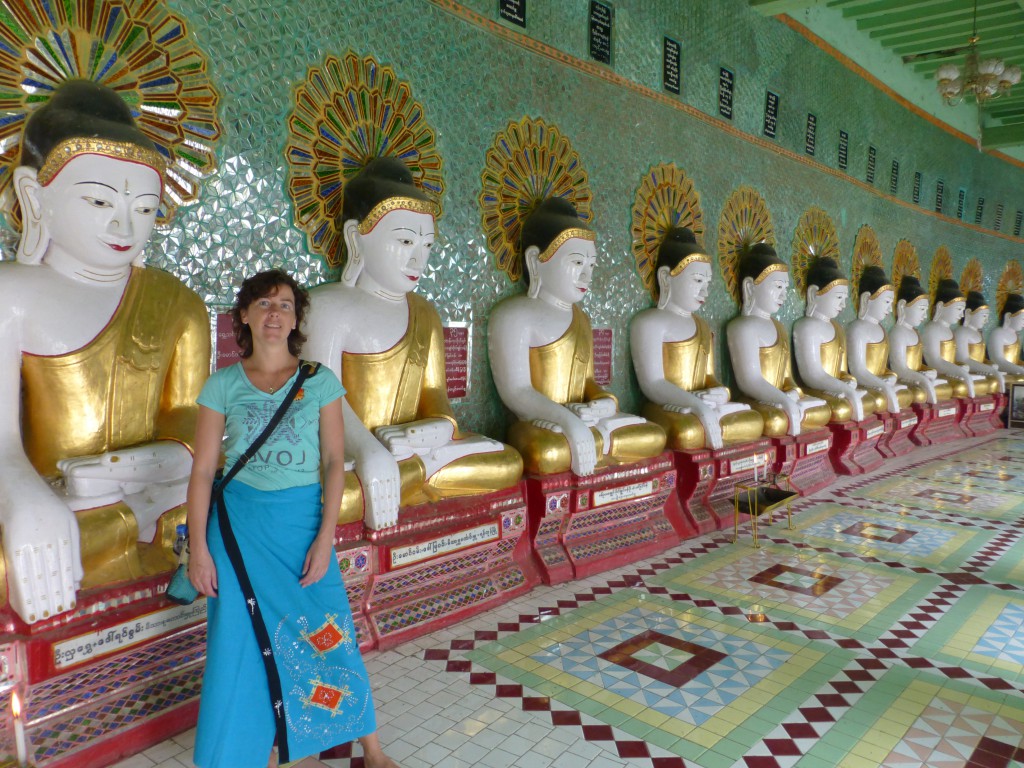 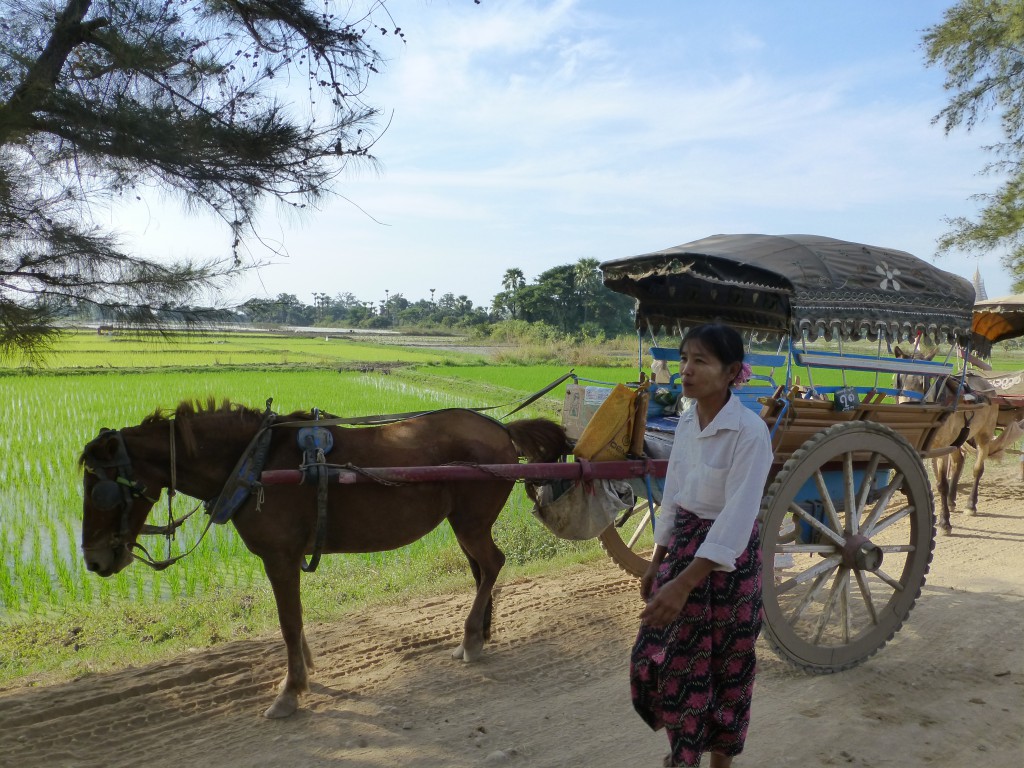 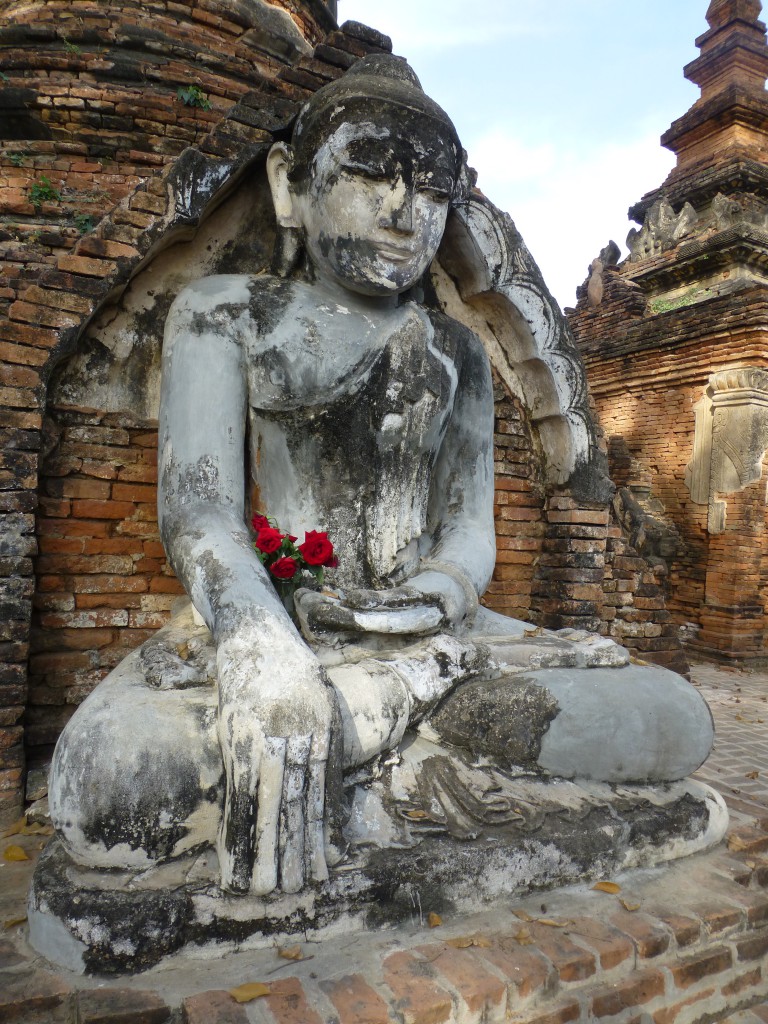 At last we went to the Famous U Bein Brigde, he had planned it carefully so we could had the time to walk the bridge before seeing the sunset on/behind the bridge. We went walking on the bridge. It is 2 km long so it is a nice walk. In the beginning I was looking to the floor if I planted my feet on the boards. You can look through it and see the water or the land underneath it. But at some point you just start walking and you forget about that. 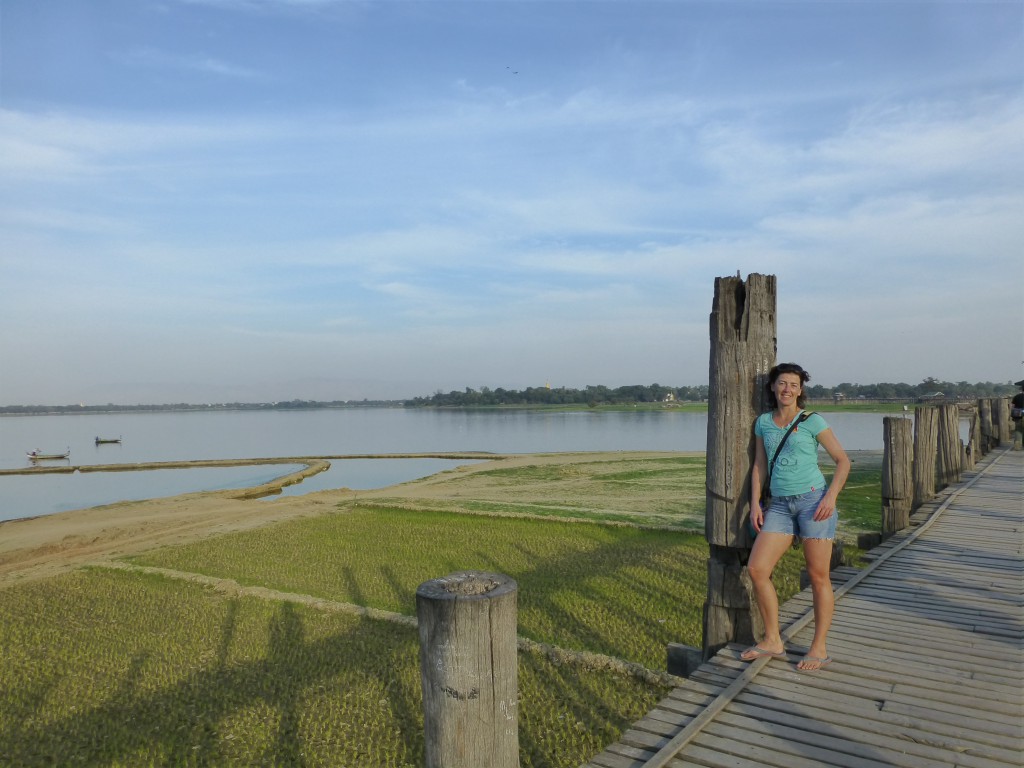 Not everywhere the brigde is over water as you see 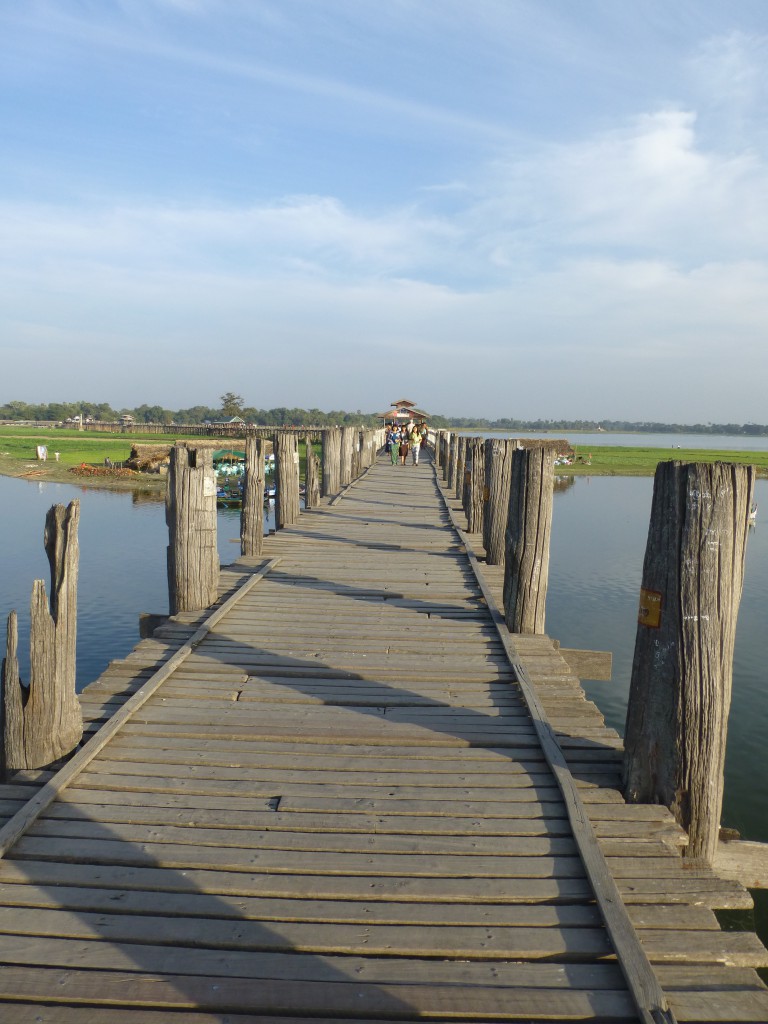 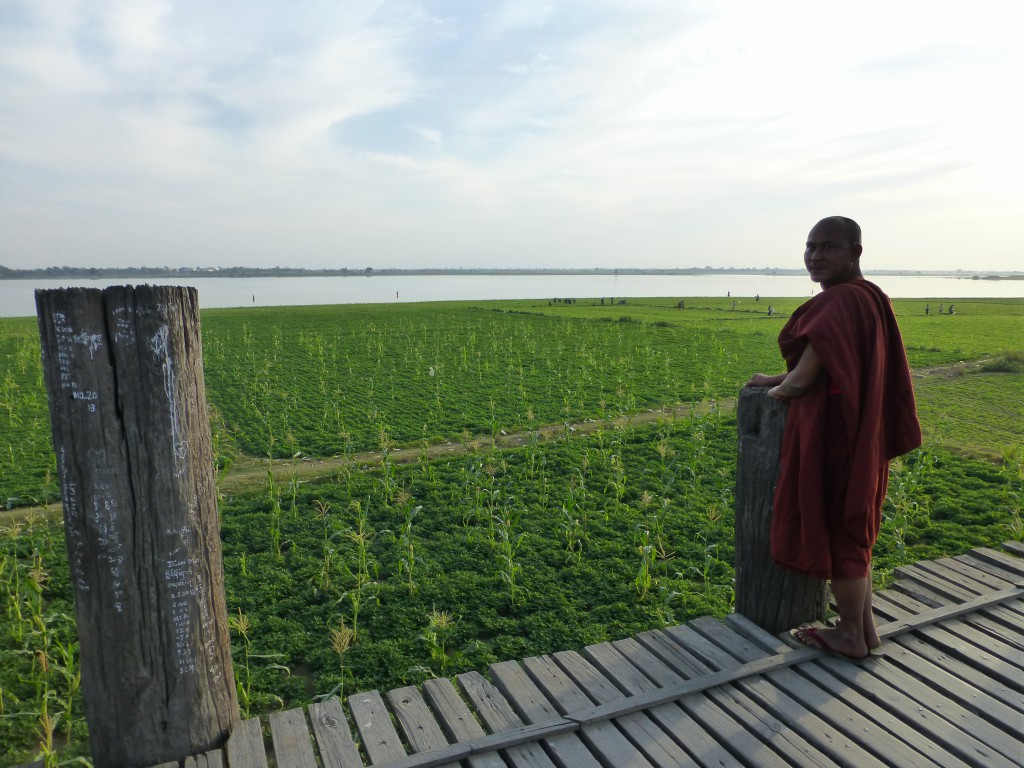 On the famous U Bein bridge is a lot of activity. I saw some tourist from Holland I saw earlier on my  trip in Bagan. But more than that you see the local people walking the bridge, it is a kind of meetingplace for everybody. I really liked seeing the youth walking hand in hand or in small groups. They are sitting under roofs at the connection points on the bridge talking with eachother. 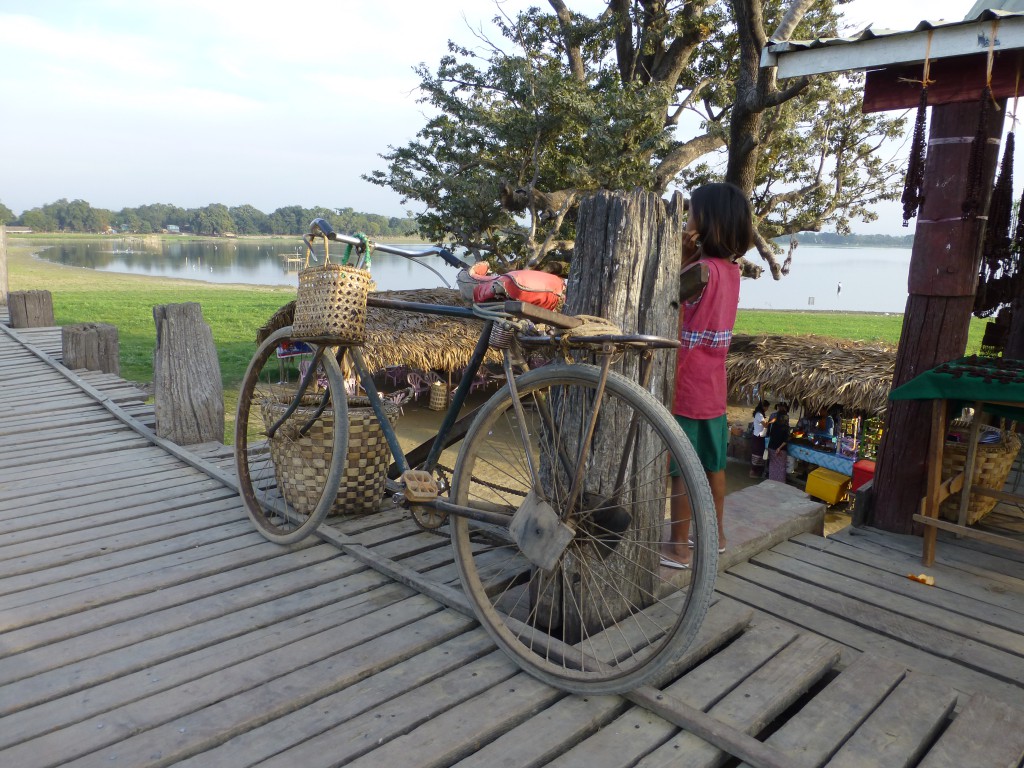 At the opposite site there is a small village where you can visit a monastry or temple. When we were walking there we got the feeling that the sun was setting soon so we went back on the U Bein bridge to find a nice spot to make our pictures. 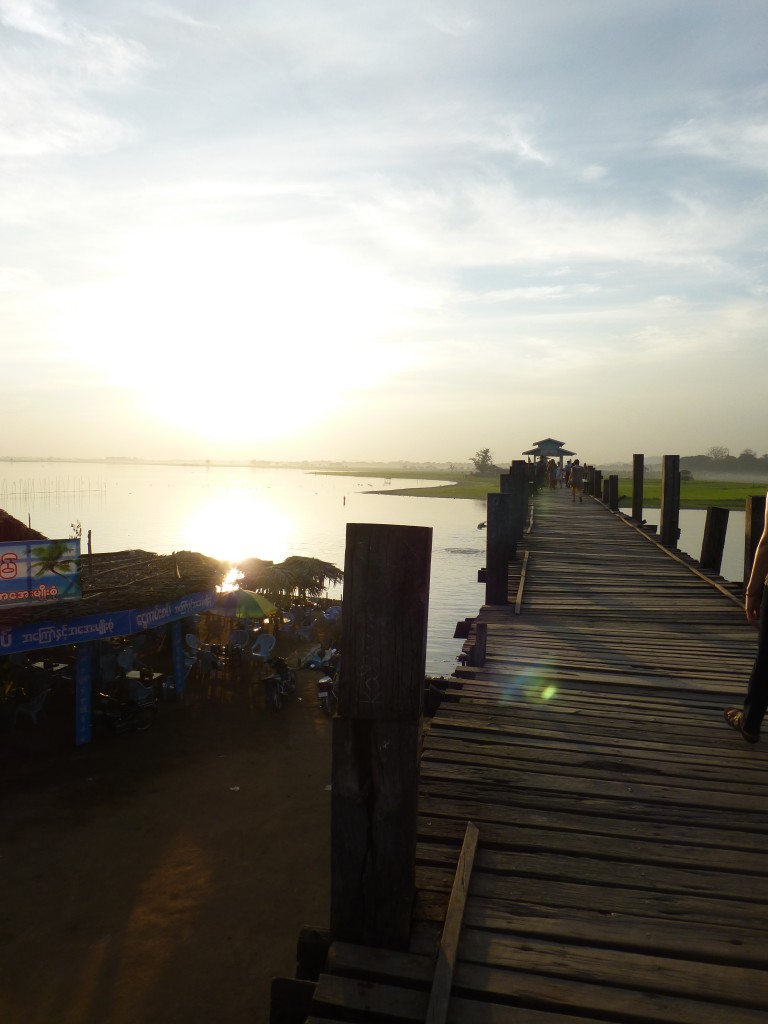 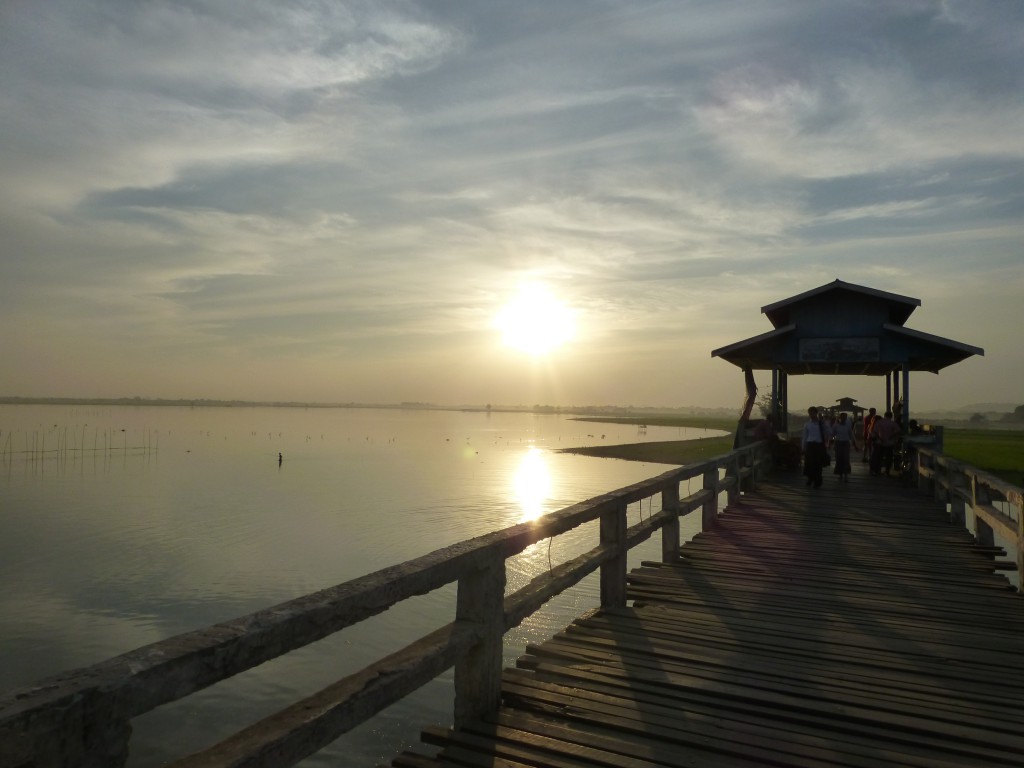 At some point there was a stairs going of the bridge. Walking down there you came at a field in the middle of the lake. The water wasn’t high enough to cover it all, probably in rainseason different. There were a lot of tourist already standing there to make the best pictures. Pictures I saw on the internet before coming here.  Pictures with the bridge in front of the sunset. Great! 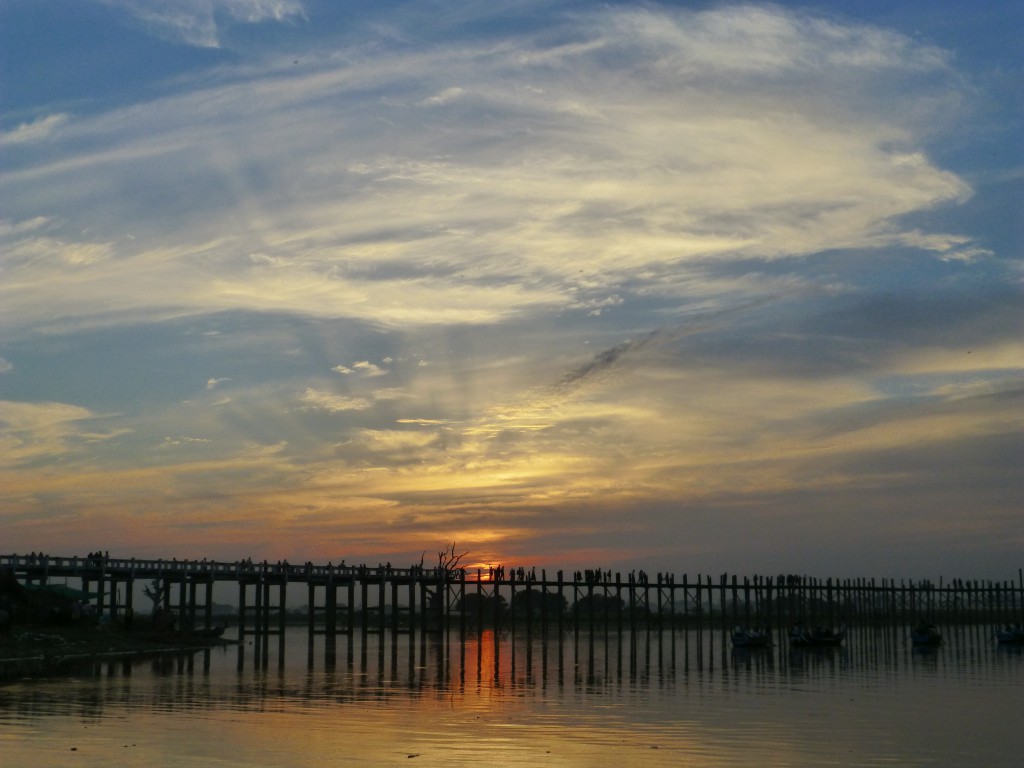 U Bein Bridge as you see a lot on the internet 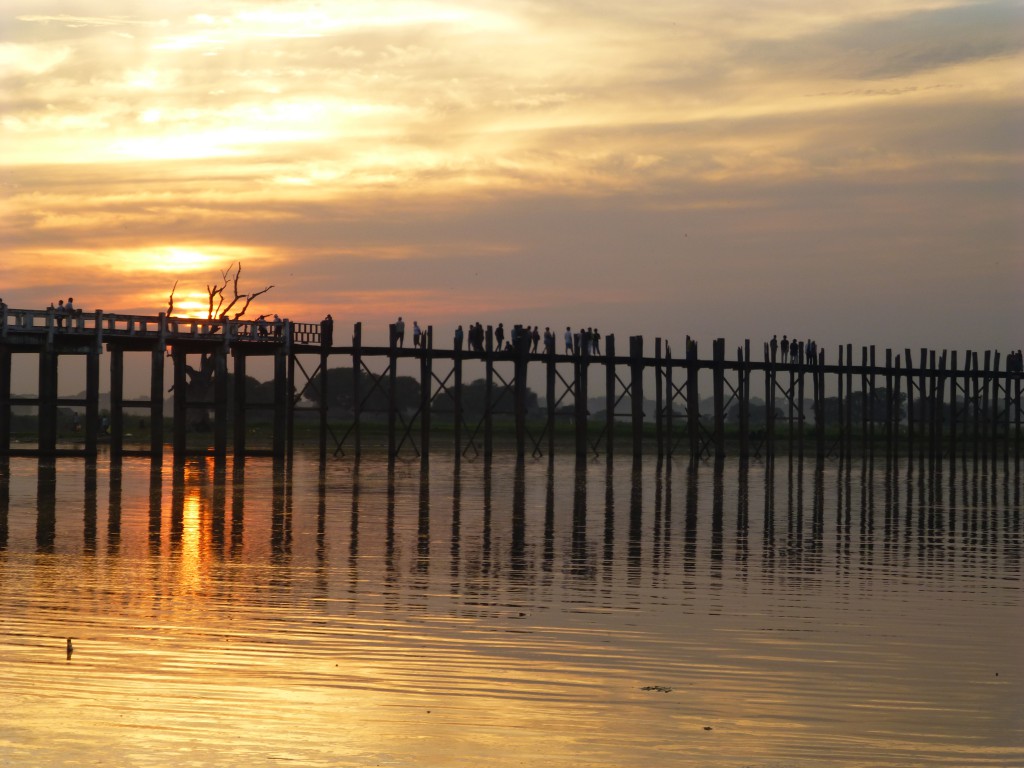 On the lake were different boats, tourist boats. They had ofcourse a great place behind the bridge. They could get some great pictures. 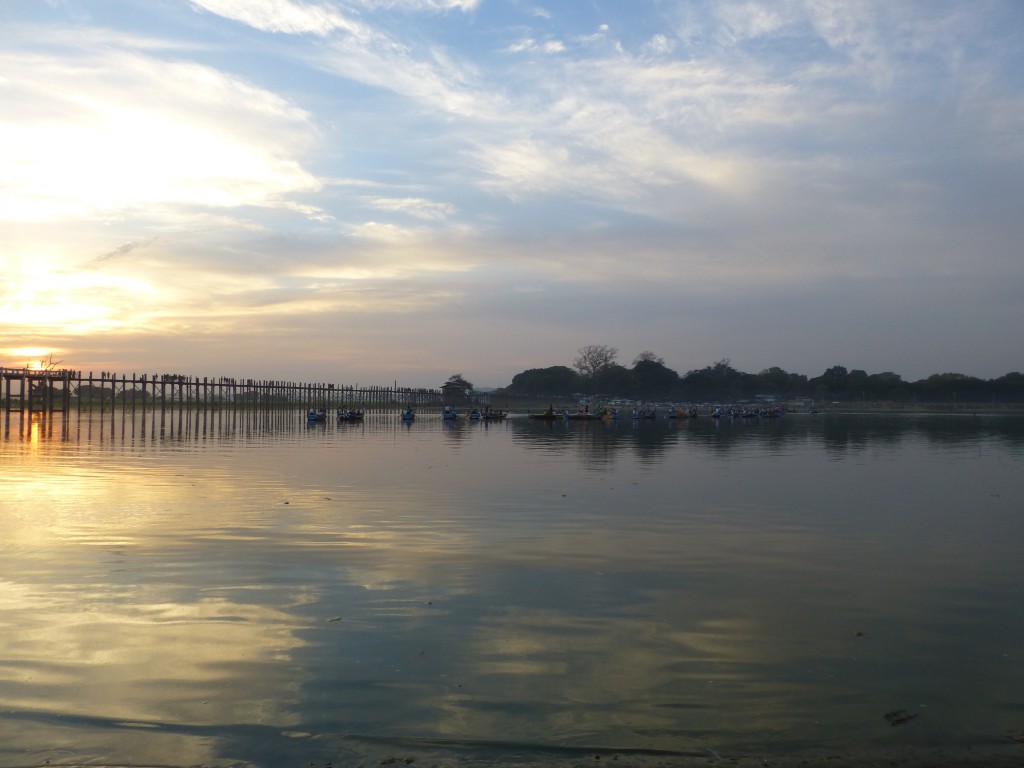 I’ve got some great pictures!

The sunsets in Asia are always the best!

In Holland we have to be lucky to get those colours!! 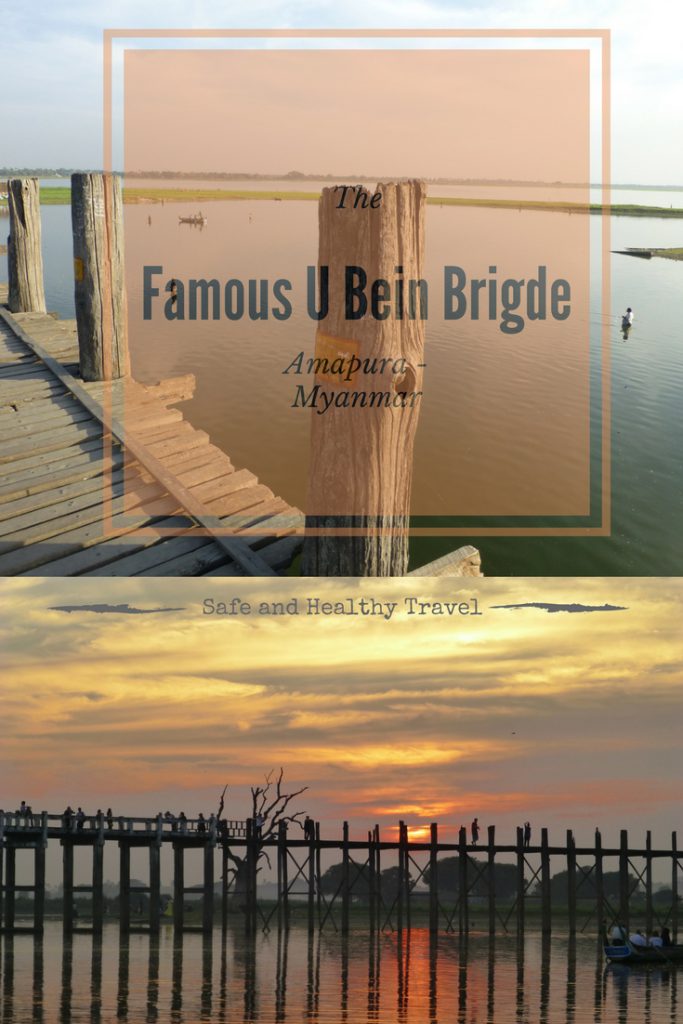