When you visit Cambodia you sure have to visit the Killling Fields even though there are horrible!!

I went to Phnom Penh in the end of 2012 and started to read about all the things that happened. I had heard of the name Pol Pot and the Khmer Rouge but I didn’t really knew what the had done. But now, while traveling in Cambodia I started to read articles in the newspapers about the victims and cases are still being fought in court of the cruelties.

Want to read this blog in Dutch? Click here

I started to realise that this history was still in my lifetime. It was just 38 years ago. The Pol Pot regime ruled in the years 1975 till 1979 and I’m borned in the year 1974. I was allready on this earth when these horrors happened. I couldn’t imagine that. We, in The Netherlands always remember the WWII and the persecution of the Jews. This was a same kind of persecution only started in 1975. The people of Cambodia that didn’t comply the rules of Pol Pot were imprisoned and murdered in a horrible manner.

1.7 till 2.5 million victims throughout the regime

I was totally conscious about the fact that these things are still happening all over the world… Think about Syria …The Gaza… I suddenly got a real bad and awful feeling. You always see those images on the news and the internet and till some point you don’t even recognize the personal horror to that news. You get immune, it doesn’t get inside anymore. This is obviously self protection and you need to…you see all the horror and can not act properly to stop it..

The day I went to these places it was a beautiful day. I had a tuktuk and the driver got me to Choeung Ek or The Killing Fields. These are just outside the city of Phnom Penh so the drive there will take you through the busy streets into the quiet landscape of ricefields of Cambodia. 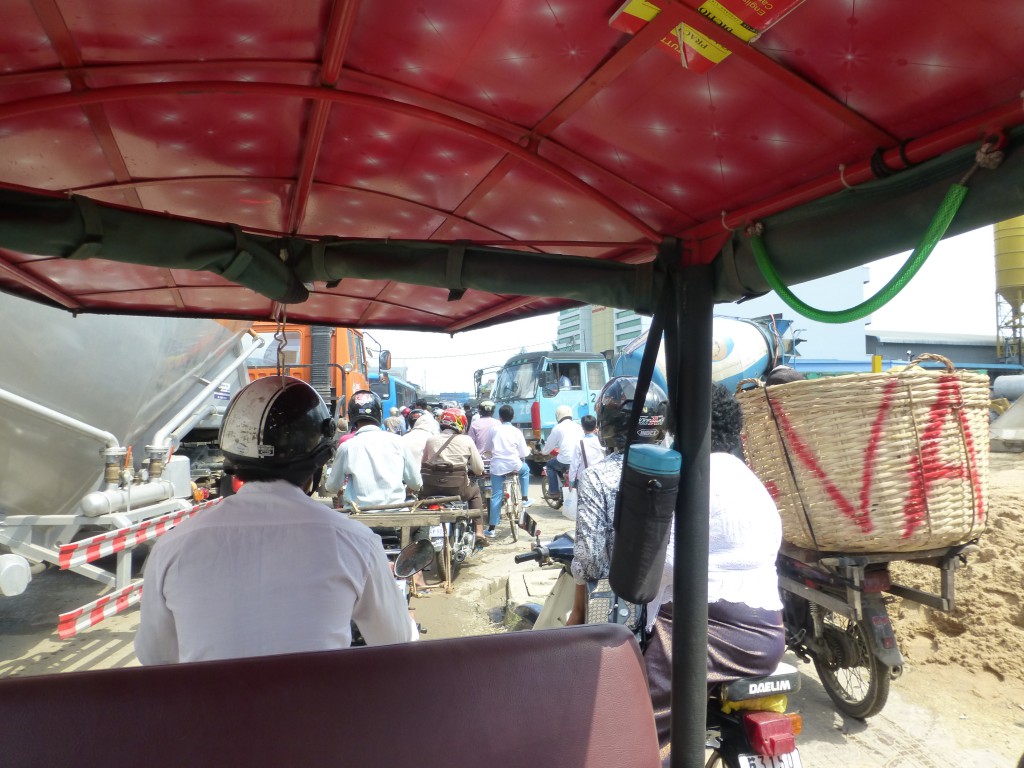 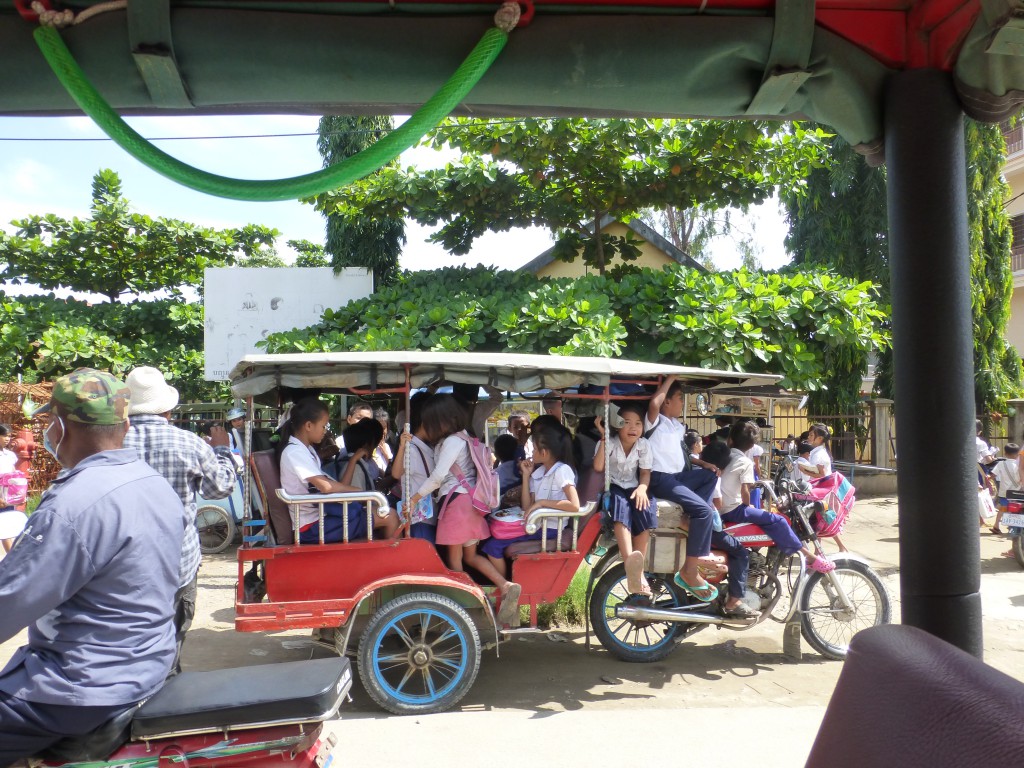 The driver stopped at the museum, the Killing Fields or Choeung Ek. I got an earphone and a map with description and numbers of places on the grounds of the museum. The numbers on the map are put on strategic places, while standing on  such a spot you can press that number and listen to the explanation.

I started to walk and the first building I saw was the commemorative stupa filled with the skulls of victims.  It was build to remember all the victims, you can see so many skulls behind the glass. Also a lot of personal belongings and clothes. 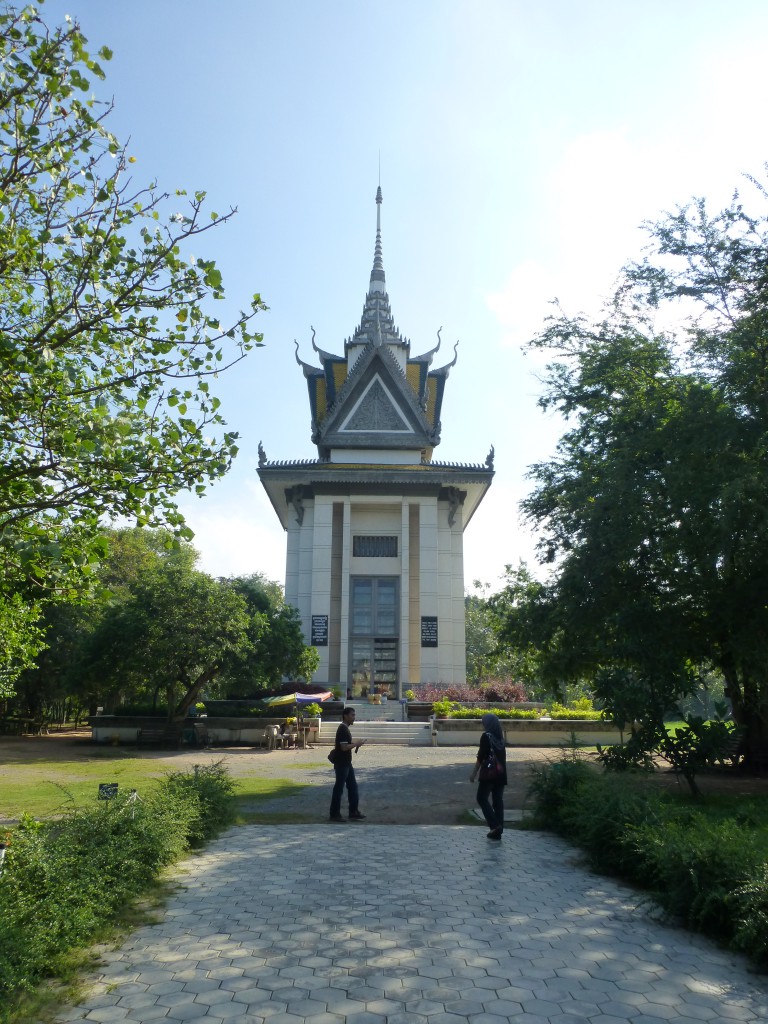 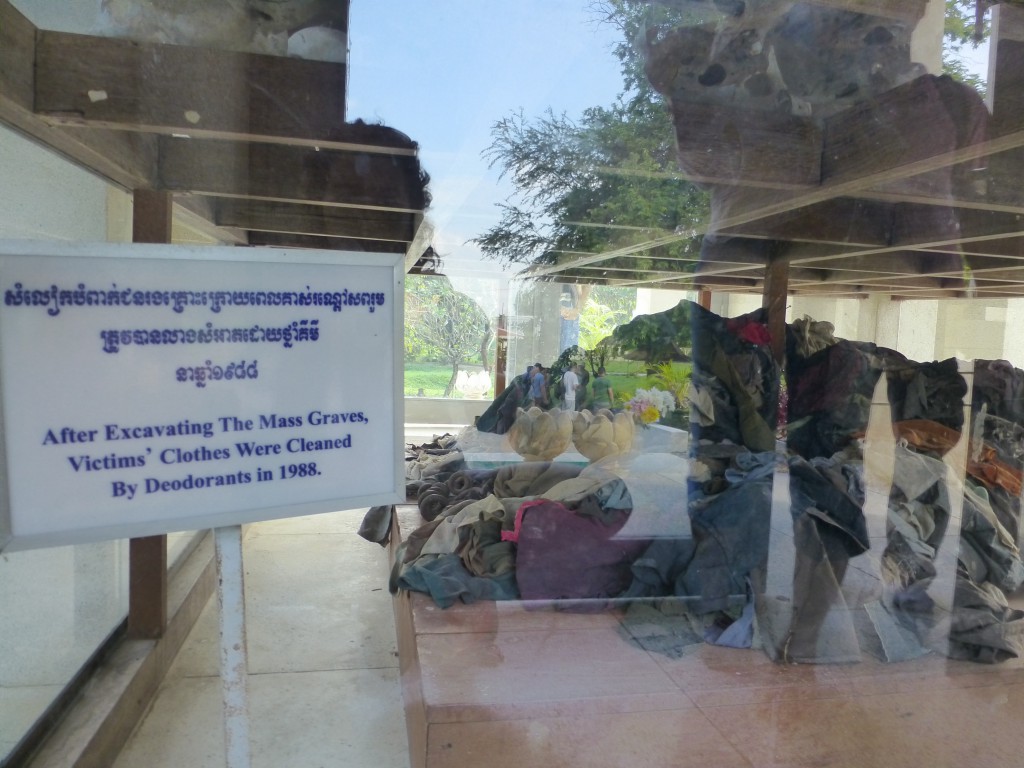 Clothes and personal belongings are put on the ground floor 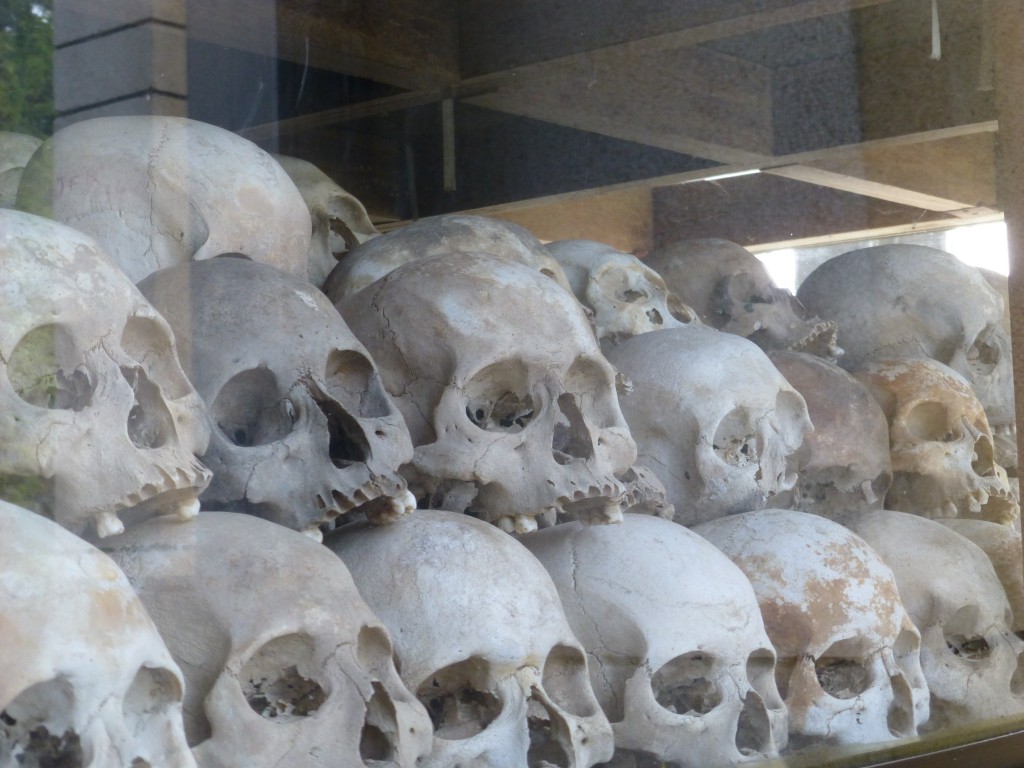 All other floors are filled with skulls

Walking on I heard a story of a man, he was telling the story himself. It was one of the survivors! I heard him talking about the horror he had seen and experienced on these grounds. This was translated in English ofcourse but meanwhile you heard him talking. It was very impressive! I got cold shivers all over.  I was standing on the spot where he had seen these horrible things he was telling about…. 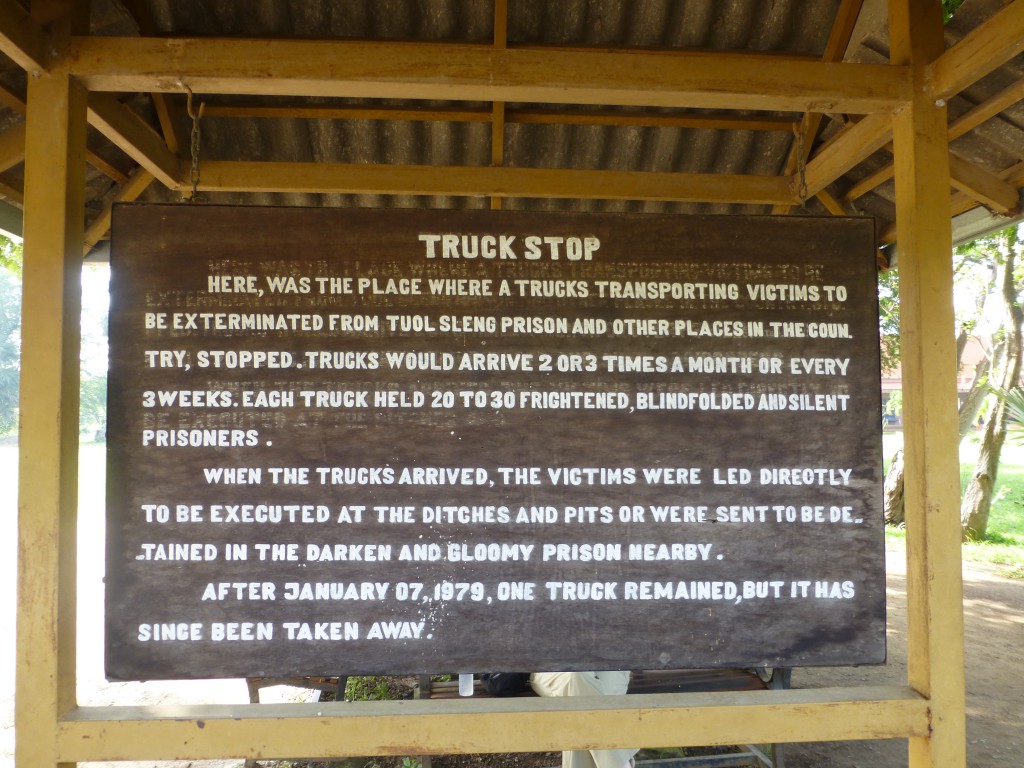 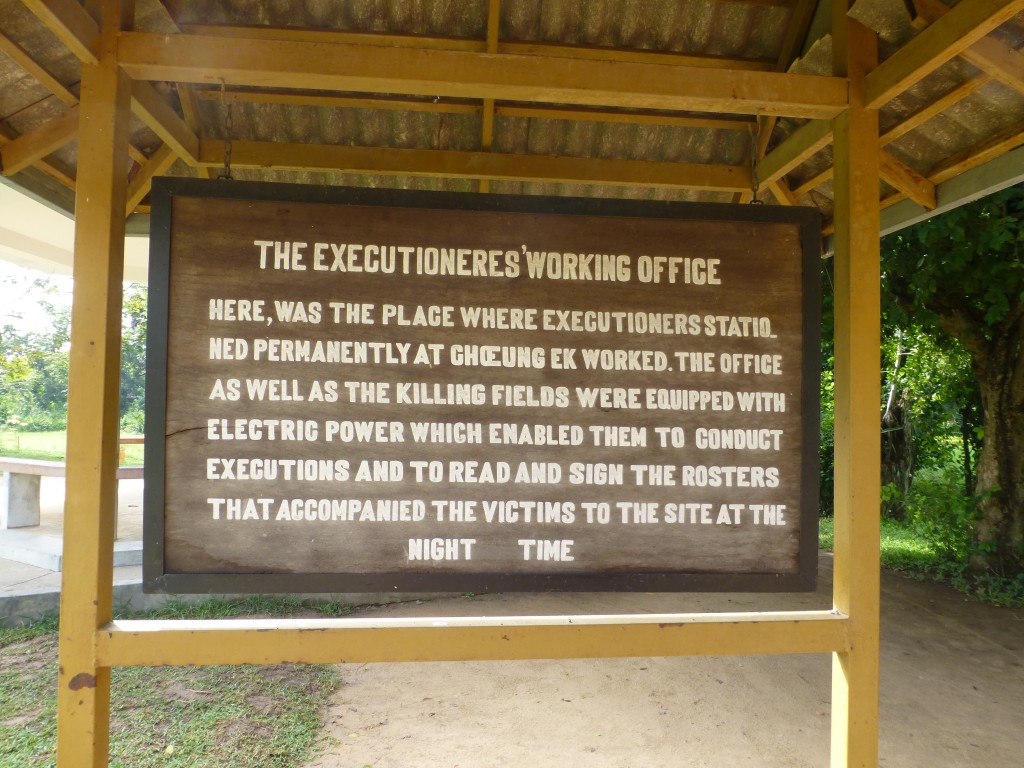 While listening to the horrible stories you walk through this area of destruction. People were getting killed by beating them with a shovel or spade. This happened because they didn’t had any other weapons, that would have been to expensive.. The suffering was immense, you can not even imagine this!! 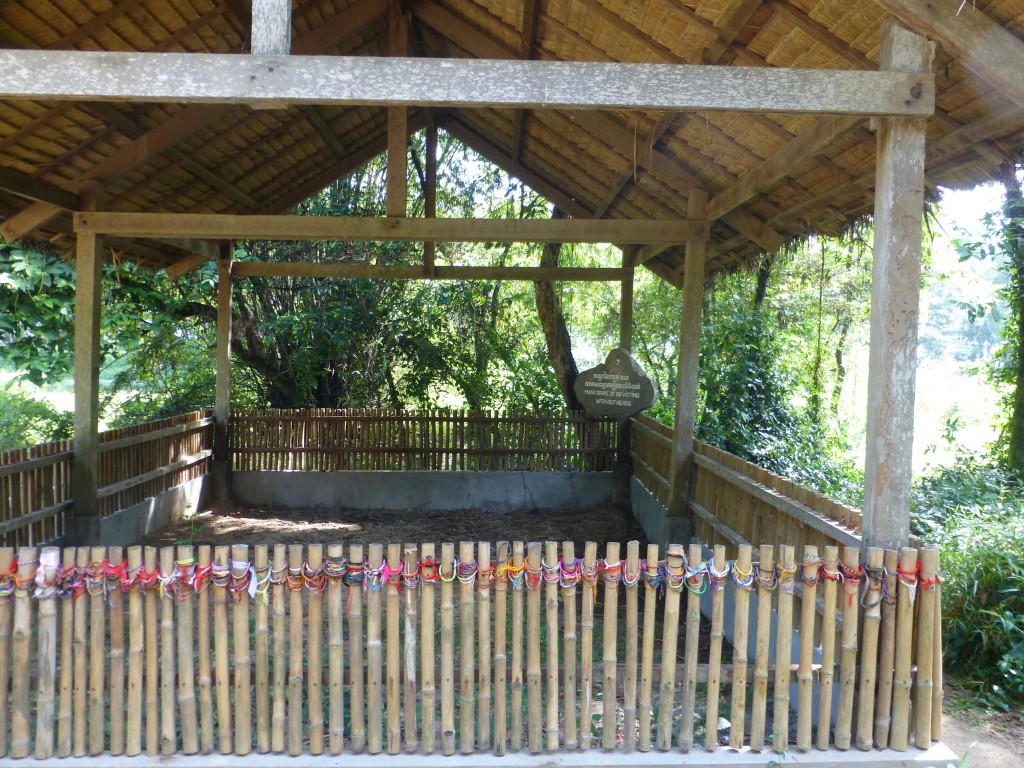 At some point I came to a tree. The tree was called Chankiri Tree or Killing Tree. There were hundreds of braided cords hanging on this tree. The story I heard standing near this tree was one of horror!! They used to smash children and babies against this tree in order to kill them. I just got nauseous because of it, standing next to it… How much blood was shed at the foot of this tree. 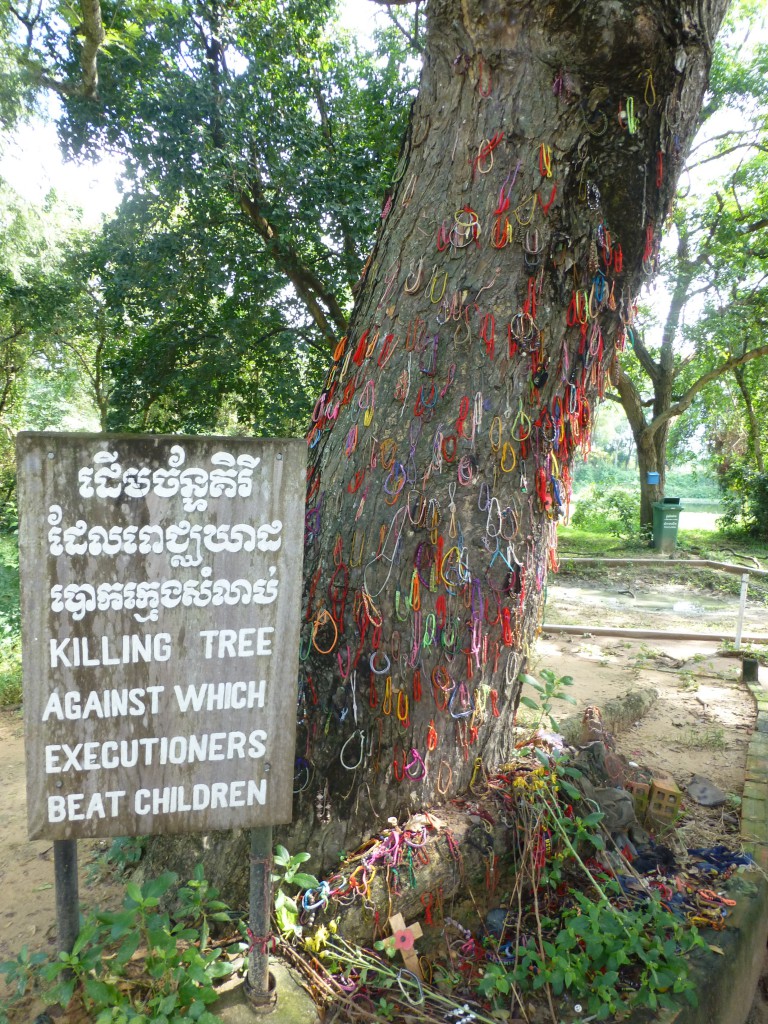 Next to this tree was a piece of land where a lot of clothes and bonepieces were found. Because of the weather these items will come to the surface. Also over the whole area you can see holes and pits that were mass graves. There is still so many…so many undiscovered in this area…. 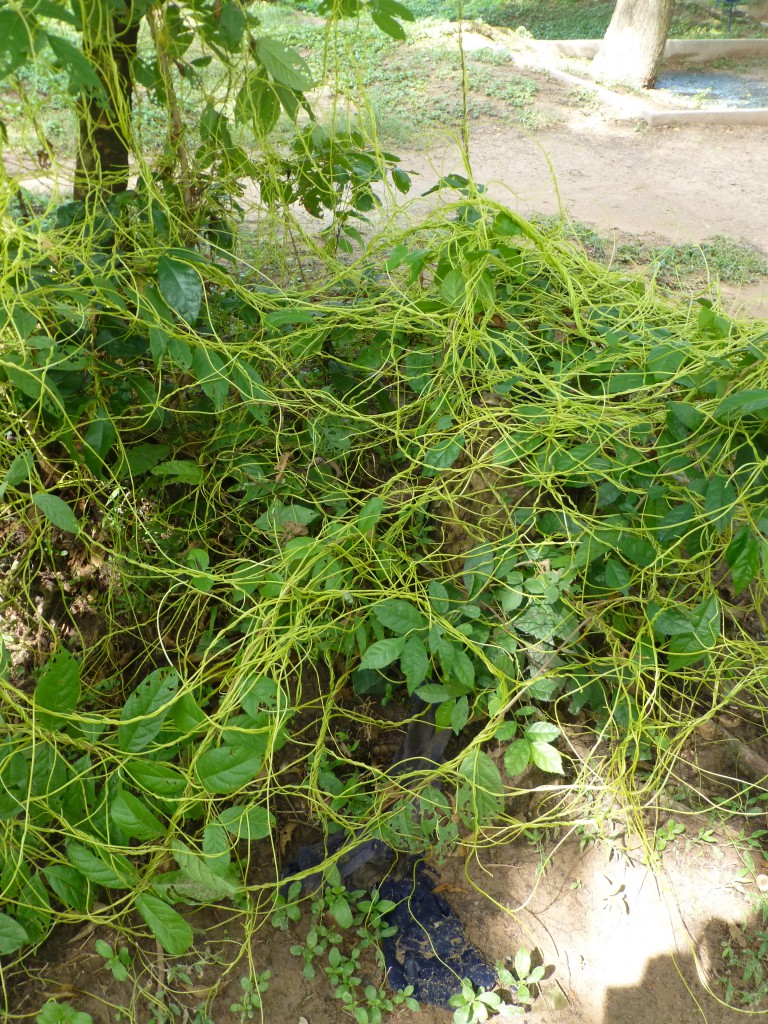 In between this green you see blue clothes…

Everywhere you walk you see these pieces of clothes sticking out of the earth. 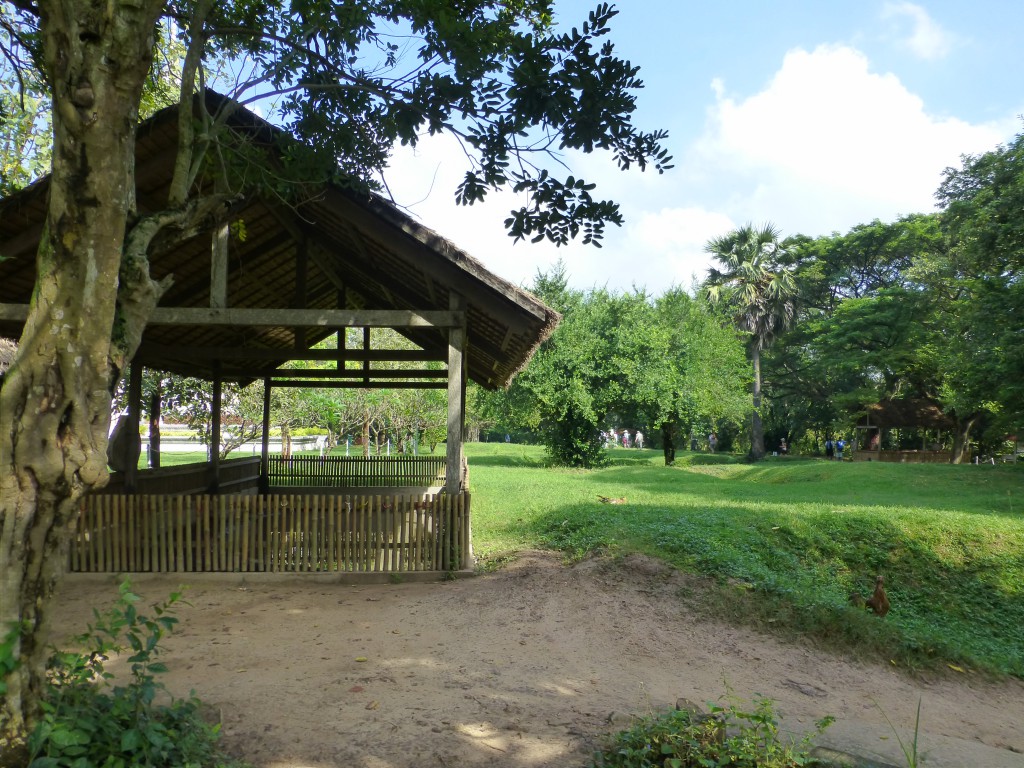 After this visit I was brought to Former Office S.21 also called Tuol Sleng. 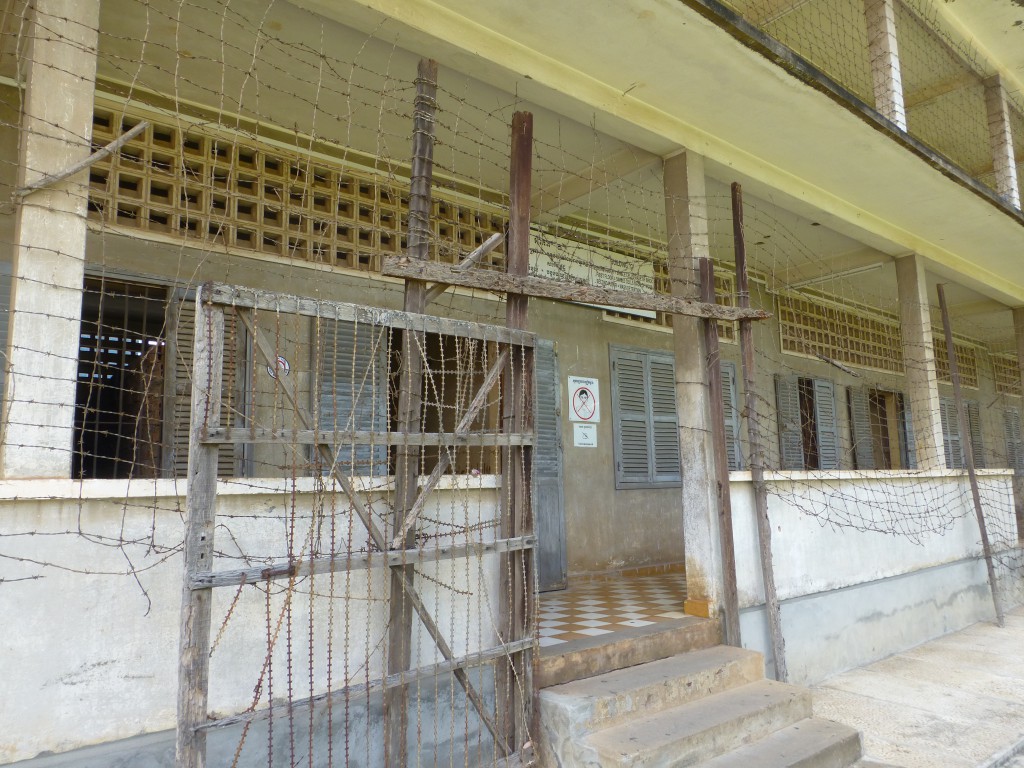 This was a school that was turned into a prison for the Pol Pot regime, the Khmer Rouge. The most horrible tortures has happened here. The visit here is because of that so impressive. There are so many picture of the victims and there is so much documentation of the statements that the victims made under pressure. The pictures of the victims will be in your memory for ever. The expression on their faces… The horror they allready had seen or what was still to come… 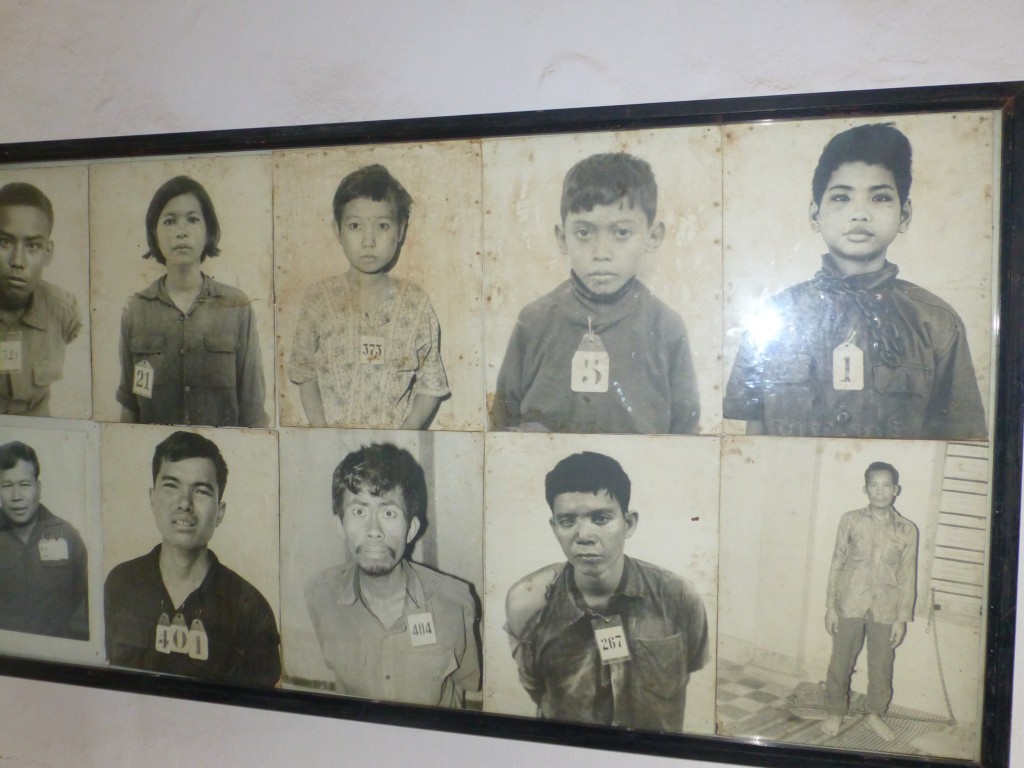 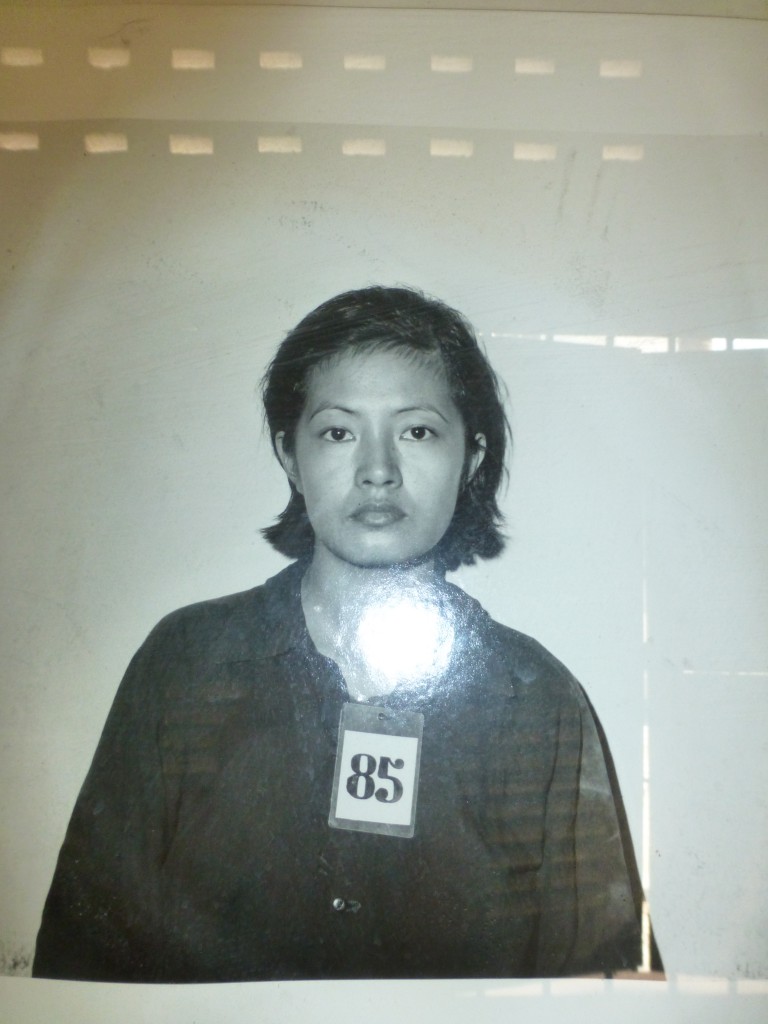 Most statements are lifestories of everyday people. Not all are extra-ordinary or people of influence on the regime. Still they are suspected of being against the regime and therefor in custody. They were tortured horrible and because of that you get statements of them that they wanted to hear. After that they were brought to the Killing Fields but many of the prisoners didn’t made it that far and died while being tortured here in Tuol Sleng.

In 1979 it ended and when they freed the prisoners there were only a view still living.  The prisoners that they found deceased on the school are now buried in a respectable grave on the area of the school itself. 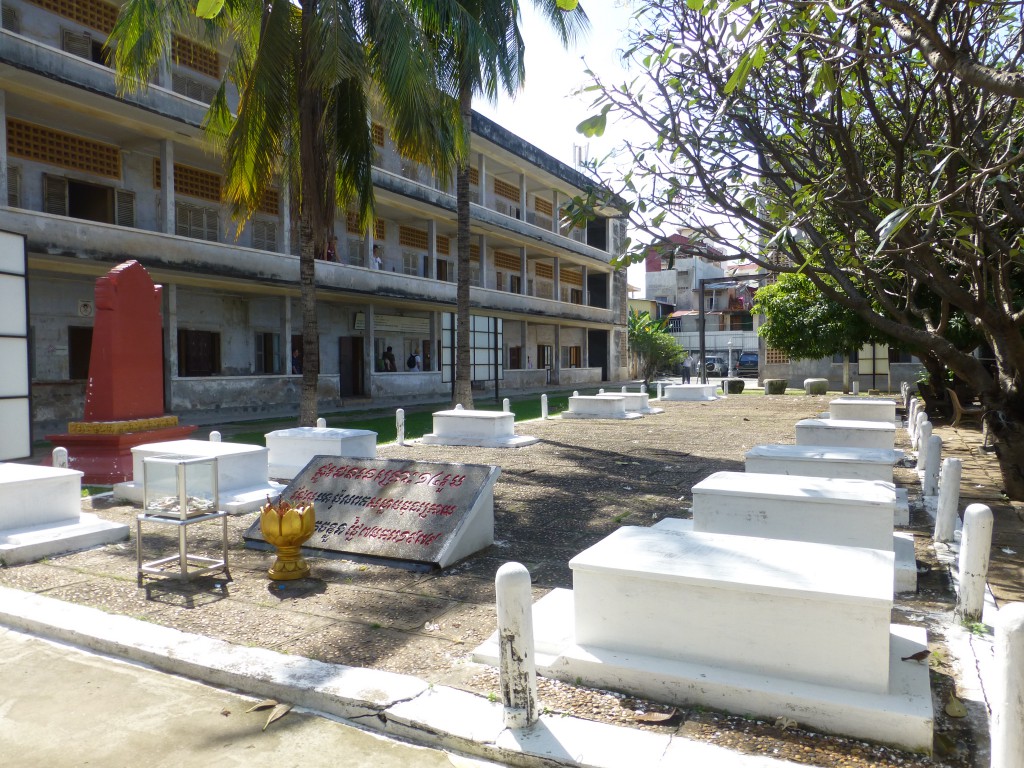 The school is still as it was back then.

In many classes are beds where the torture has taken place. 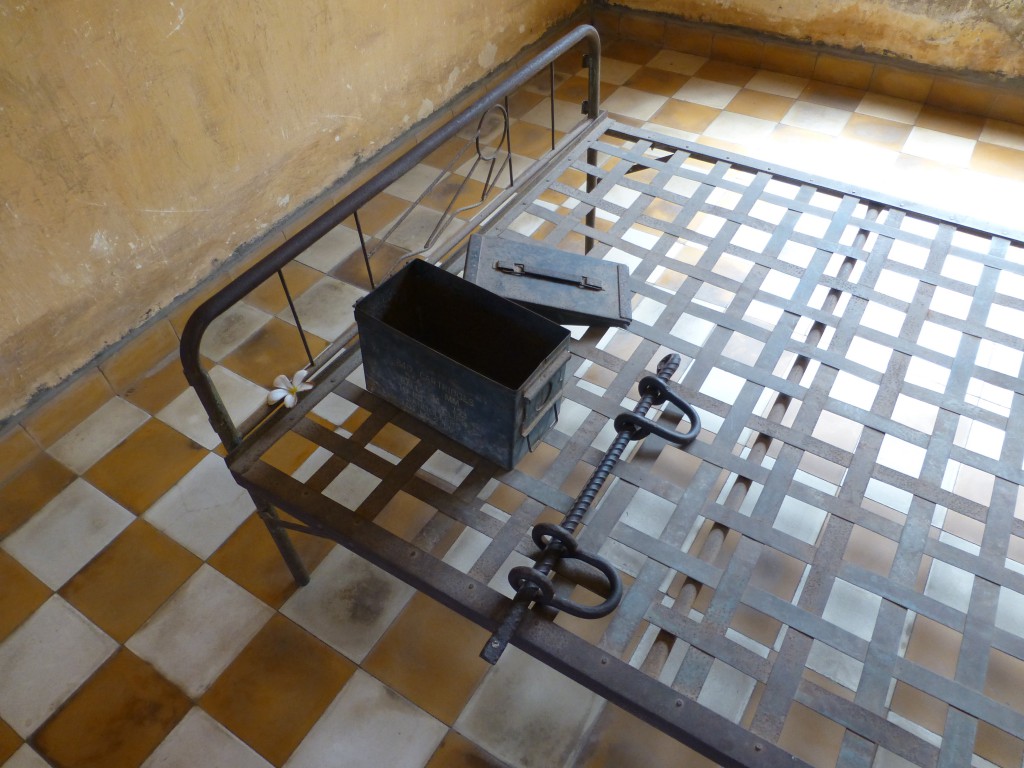 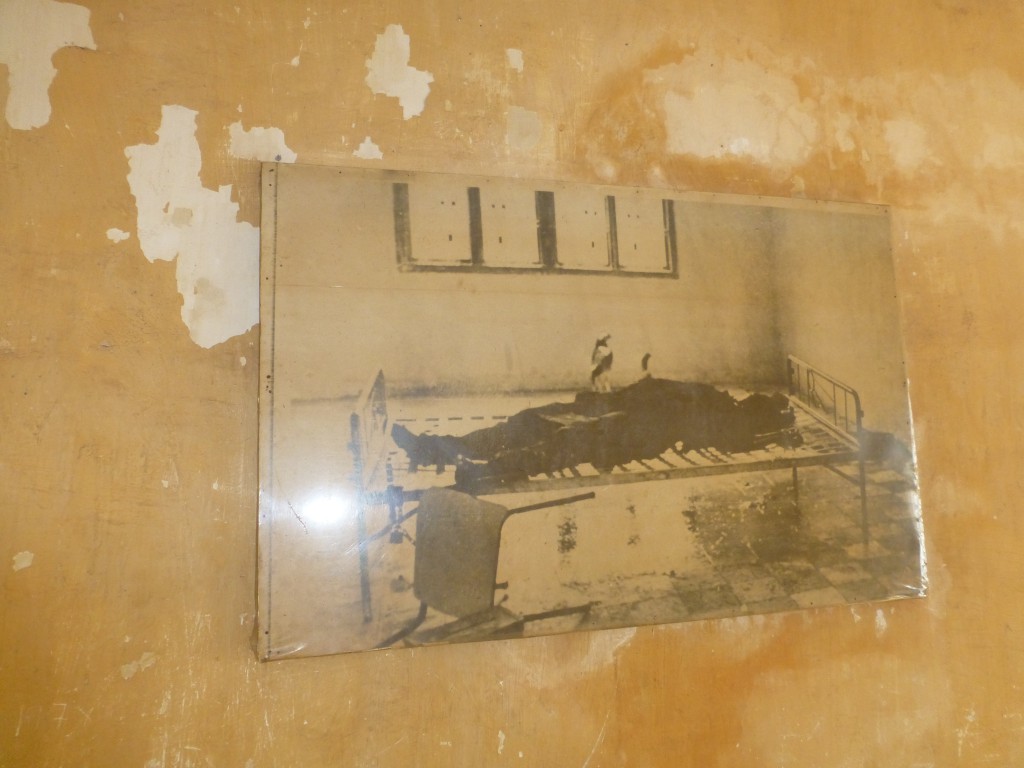 In the second building are cels visible. This building is secured in barbed wire to prefend prisoners from fleeing. These cells are made of stone and iron or even of wood. The cells are very small and dark, there is not a single supply as for water or toilet. There was a bucket and a chain in  most cells I saw. These stone and iron cells are on the first floor. On the second they were made of wood. I walked in the school for a while, watched all those pictures, saw all the cells.

I really felt sick about it.

So much horror, so much suffering…not that long ago!!! I couldn’t understand it!!