If you visit the wonderful country of Kenya you will most definitely go to the impressive Masai too!! Everybody knows about this impressive tribe, I think. They are the long African people that are able to jump really high!! If you book a safari to the National Park Masai Mara you will go and visit a village of this tribe too.

It is a nomadic tribe and our guide told us that they stay for almost 9 years in one spot. Then they pack up and go on.
Why this long? They told me that the termites will house under their houses and so destroy theirs in the end. Because there is a school build now for the children in this area they will not go that far away in about 2 years so the children can continue their education.

We were welcomed at the entrance of the village by the men in traditional colourful clothes. Shortly after they started the famous traditional dance. It is a dance they normally do at special occasions within the community.
They came walking towards us and started to chant in a low voice. It was really impressive and I felt it in my body… It felt strange when they came walking towards us and came really close… the feeling got in my body somehow…the closer they came the more I felt the vibration of their voice. I was kind of intimidated actually. I stepped a bit back even… It was really strange to realise this even fully knowing it is a show!
It was really a impressive experience!
After some time they started to jump… It really was a show off 🙂 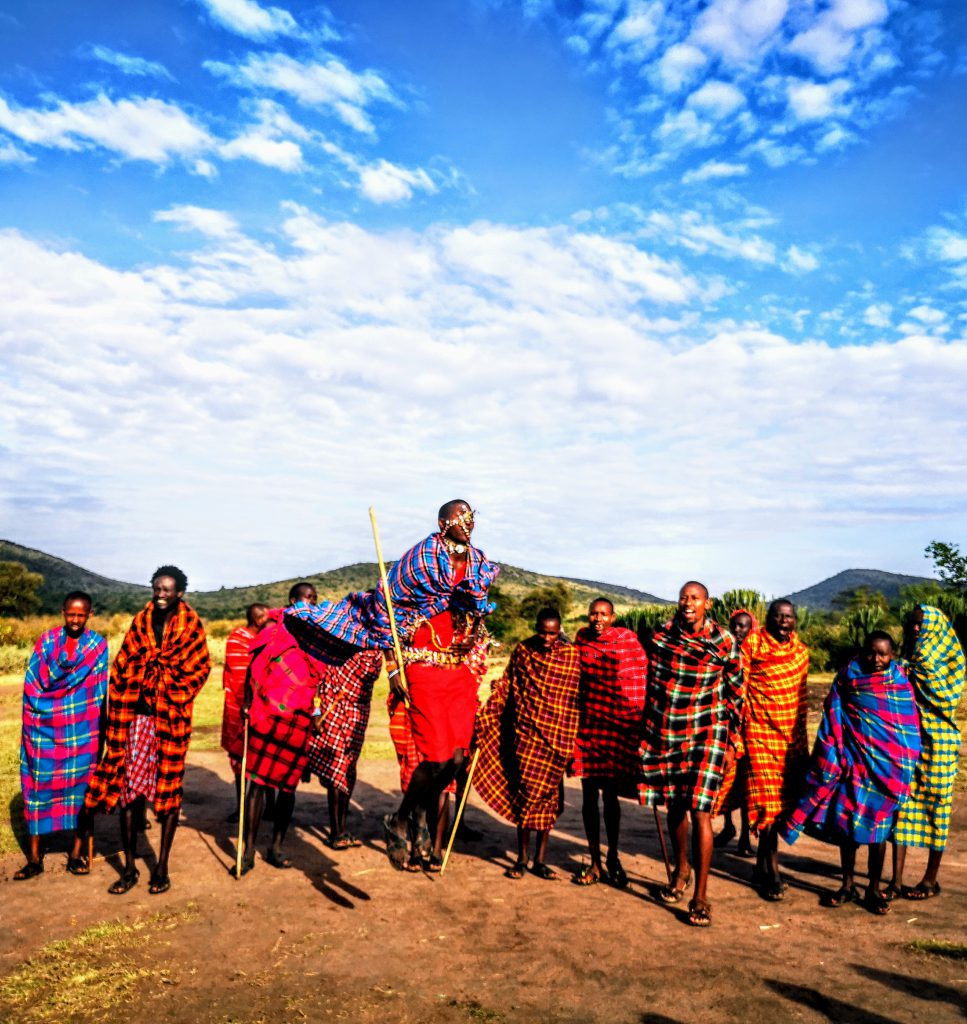 Check the clip to see how high!

I heard that they learn to jump high when the boys become men. They will go out of the village when they are 15. After a long periode, can be months, they will come back and they have to kill a lion. Nowadays they will do that ones a year or two years with all the 15 year old boys. Symbolic still a part of life but the young men of these days haven’t killed a lion with their own bare hands.. 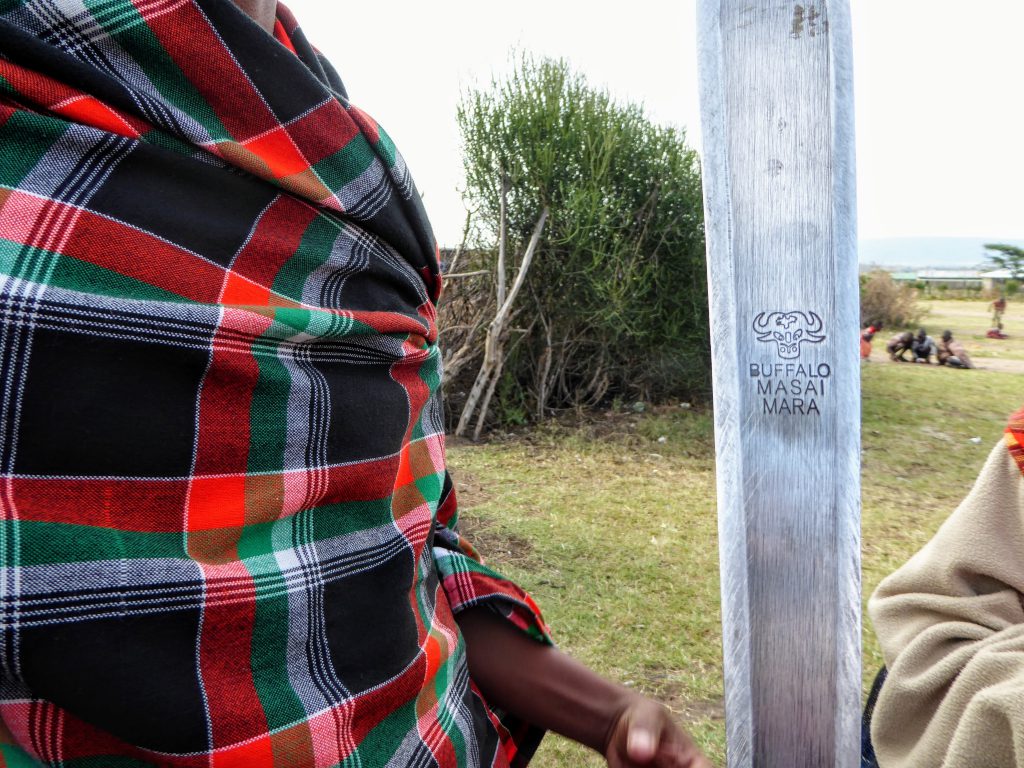 They still all have a big knife with them to defend themselfs. You can encounter a wild animal around here. It is also because of that to better not go walk around the area when you stay in a camp near the Masai Mara.

In 2010 a man died that encountered a herd of elephants. He was out walking alone just to explore a bit. He reacted the wrong way, he stayed and watched them. Best way is to go away and not give them any attention.

Read some more tips on Safe on Safari

When the boys are out of the village when they are 15 they also practice to jump as high as they can. The higher you jump the less you pay to the family of your wife to be… that is probably a good motive 🙂 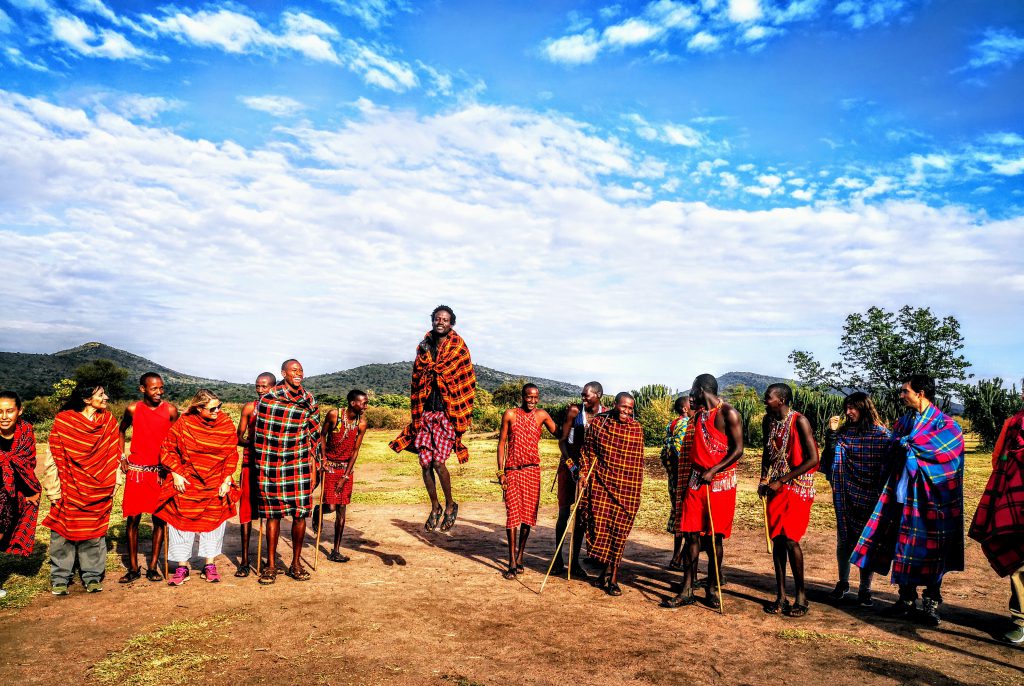 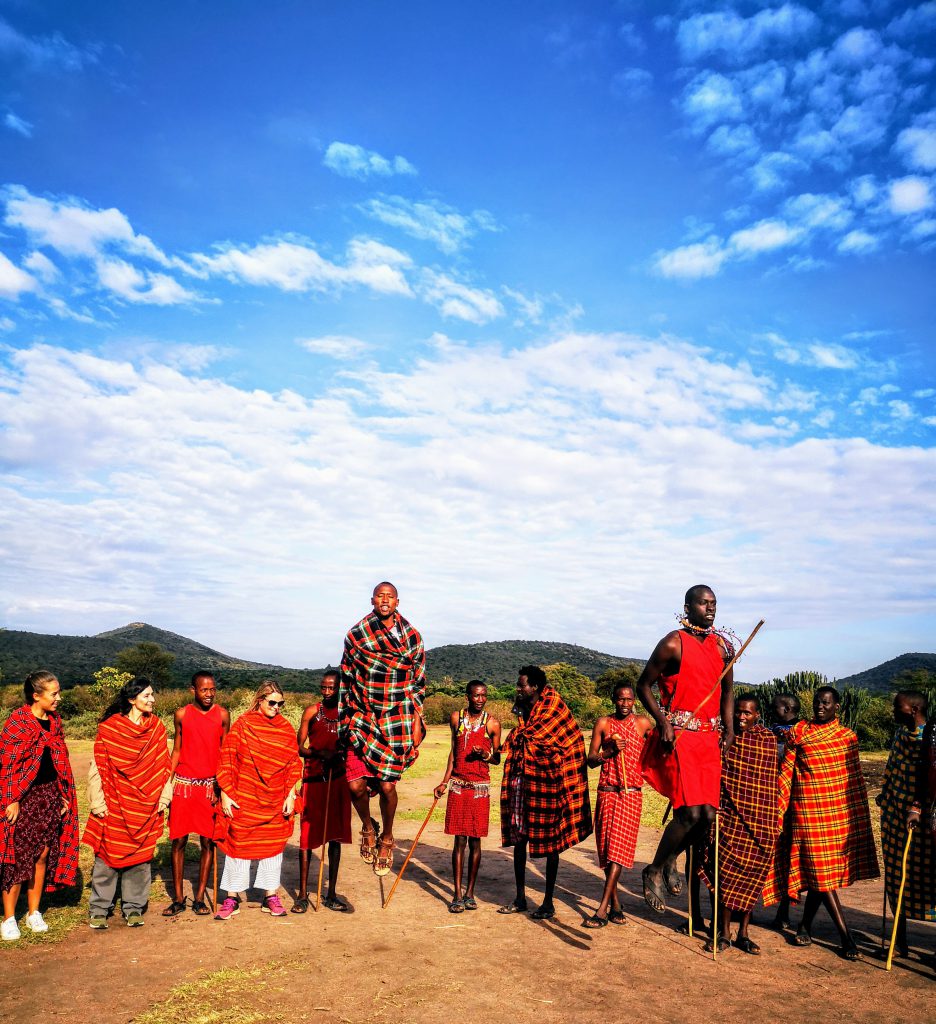 And then we were invited to show off too
You really need to check the clip for that 🙂
Our guide tells us that the whole village is family. He was standing next to another man and they said to be brothers from another mother. Because… The Masai can marry multiple women.  In this time it seems to disappear because a lot of the men say to marry because of love and don’t want another woman too. Looks like this way of living will be instinct in the years to come.
Because everyone is family you need to marry someone from a different village. 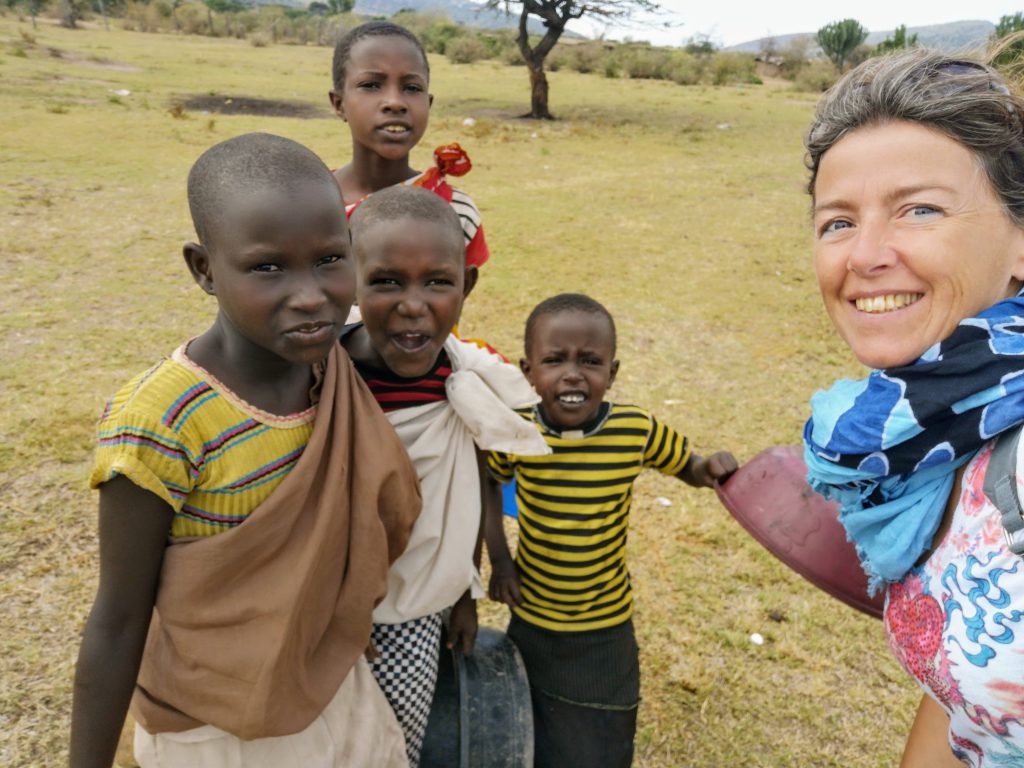 There were lots of children in the village, not attending school at that moment…
They all like a selfie!!

We were brought into the village. 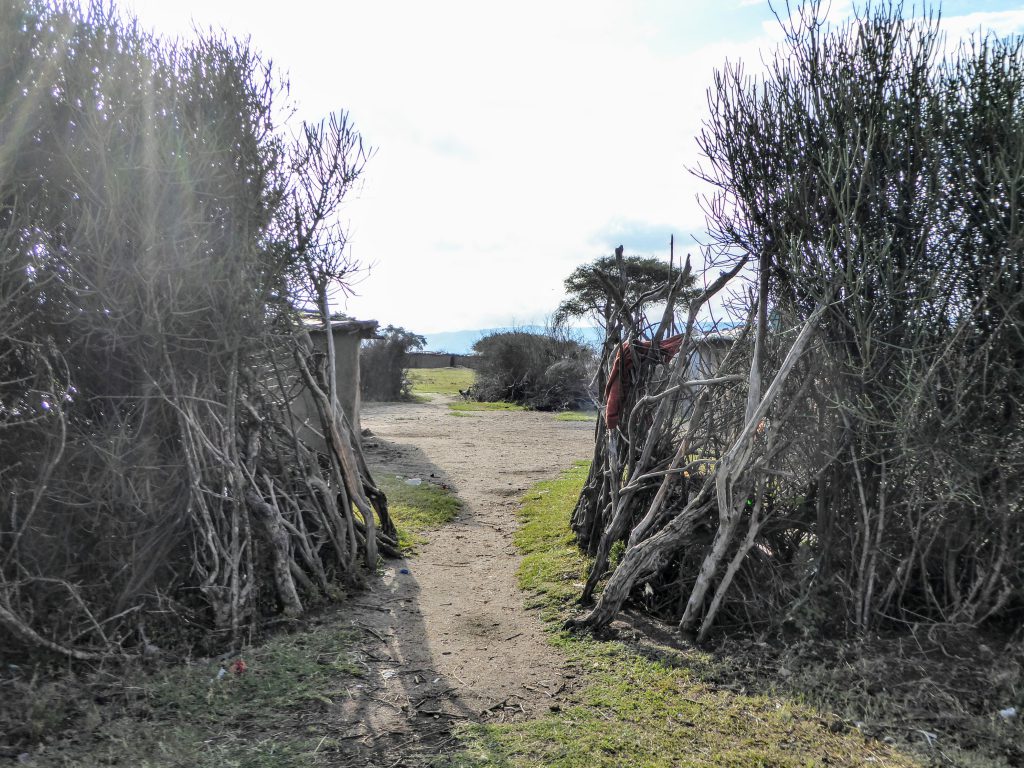 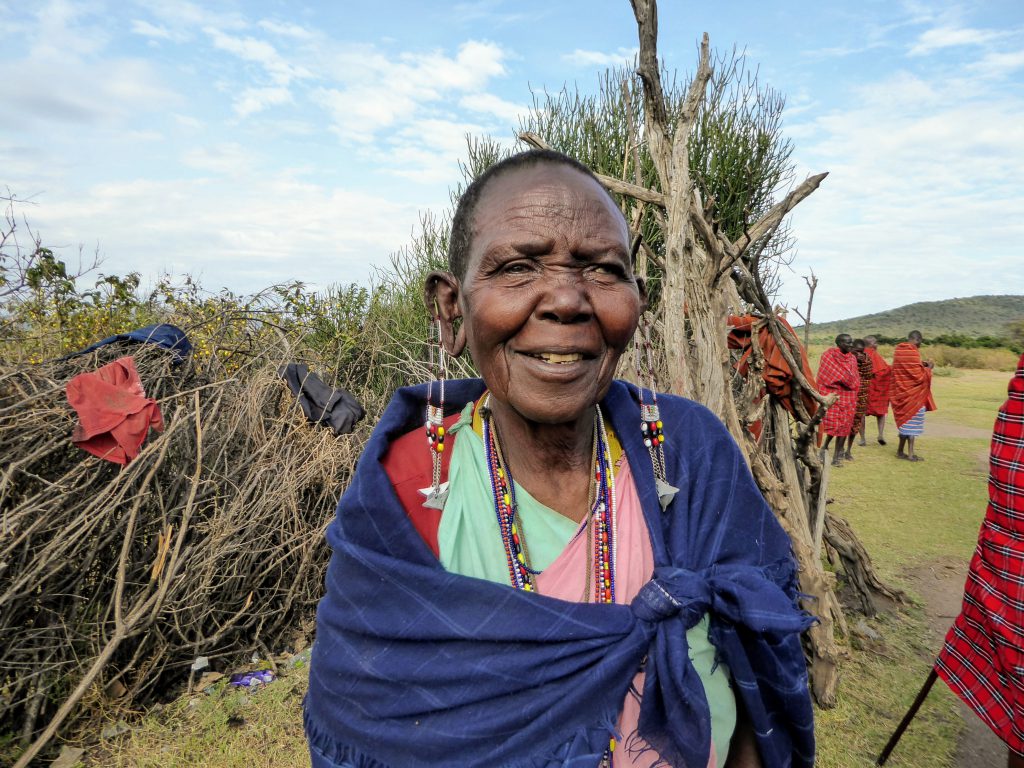 And there was this beautiful Masai lady standing near the entrance

The village is made out of small cabins / houses. They are partly cow dung and wood. In this village there were around 20 to 25 houses, they are situated around the big main square.
This square is being secured in the nightly hours because the cattle is there to sleep. This is the only way to keep them safe from the preditors at night. There are lions, leapards and cheetas around. So they do nightshifts to quard the cattle. 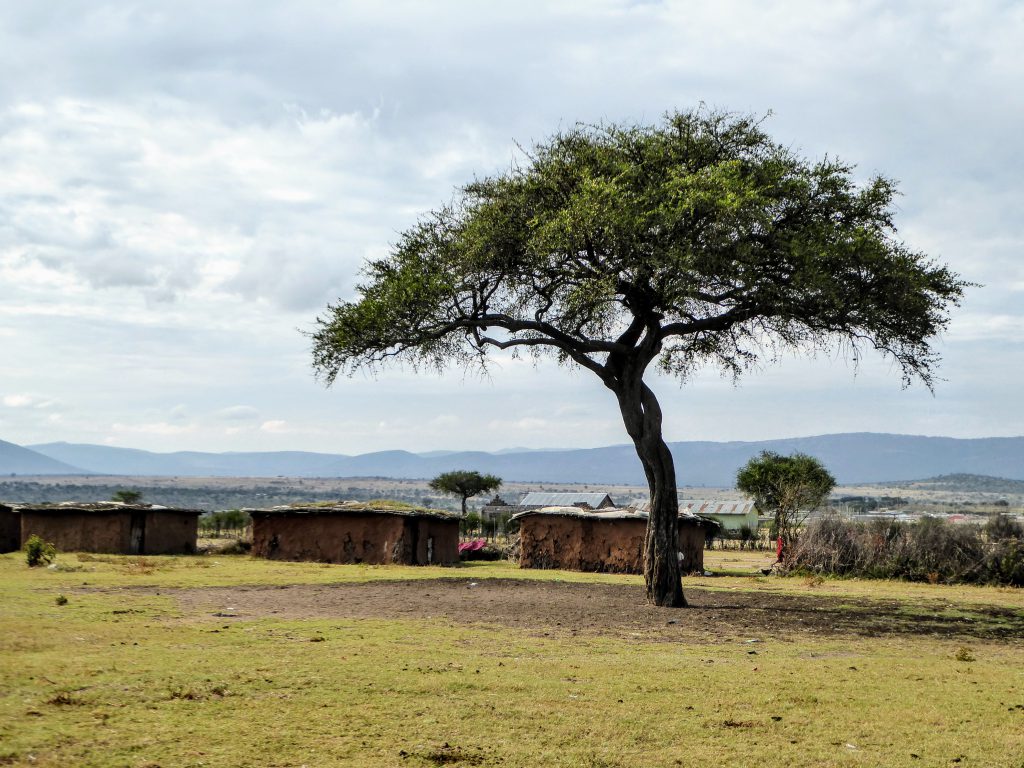 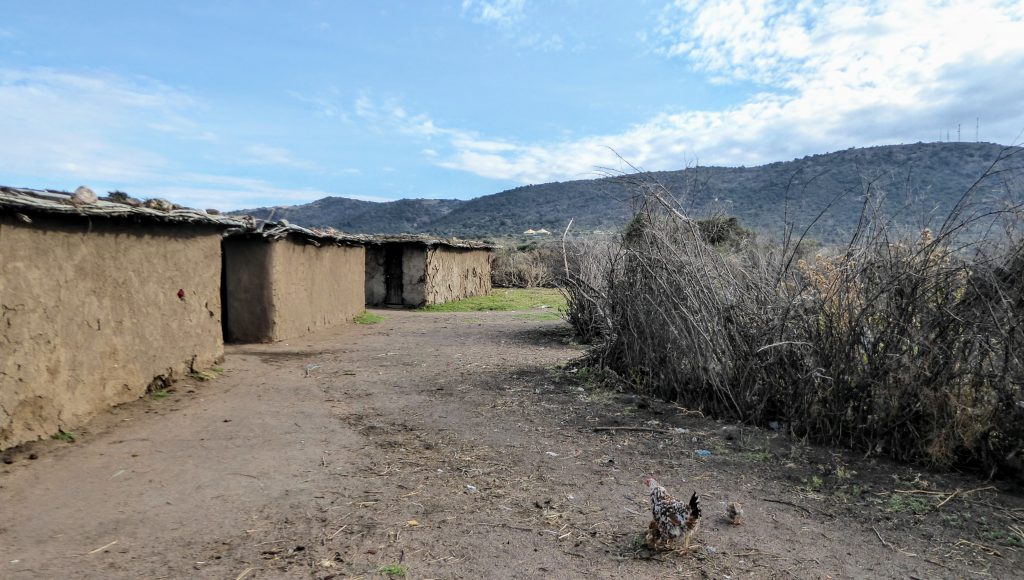 We got seperated from one another and every one was taken to a different house. Sammy took me with him to his house. I walked in through a small hal. On the rightside was a small room where sometimes a cow or calf was kept during the night. This was for milk I was told, for the baby of the house. 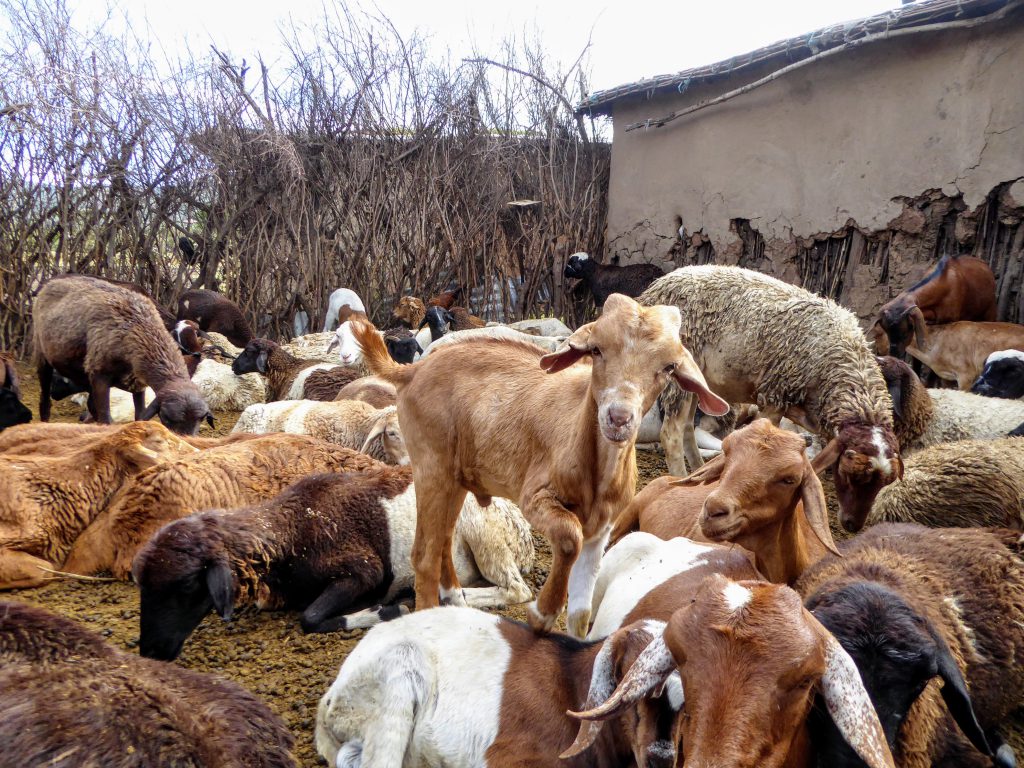 Next to the house the Masai had a small area where they kept their own cattle, the sheep and goats.

Walking on I got to the kitchen with on both sides rooms. The one left was a bedroom for the children and the one on the right side was the master bedroom. In the kitchen a small fire was burning on the floor and I saw a real kitchen kind of wall on the backside. With cabins and all!! This was the same colour as the house itself. So build in from the beginning!!

I really think it was nice and descent. We sat down on a small bench and to be honoust…I didn’t dare to lean backwards against the wall. I didn’t know if that was good enough for the weight…probably is but I didn’t dare to do it. The inside wall was also made of the cowdung and some wood. Did you know that the women of the village are the builders of houses?

When I asked Sammy why that was he answered: How should we know how that works, where we need to build what? So it’s about how the house was divided in rooms and where and how the kitchen was situated. You see that everything was build in a clever manner. The kitchen was furnished with care for space.

There was light in this house, one lightbolt. Sammy had a solarpanel, he got it from a German guy that every now and then came by. He even stayed over. I wondered where the German would sleep and when I asked Sammy he told me that they had a guesthouse. I went with Sammy into that house but the room for the guest was closed at that moment but they told me there was electricity and a good bed!! 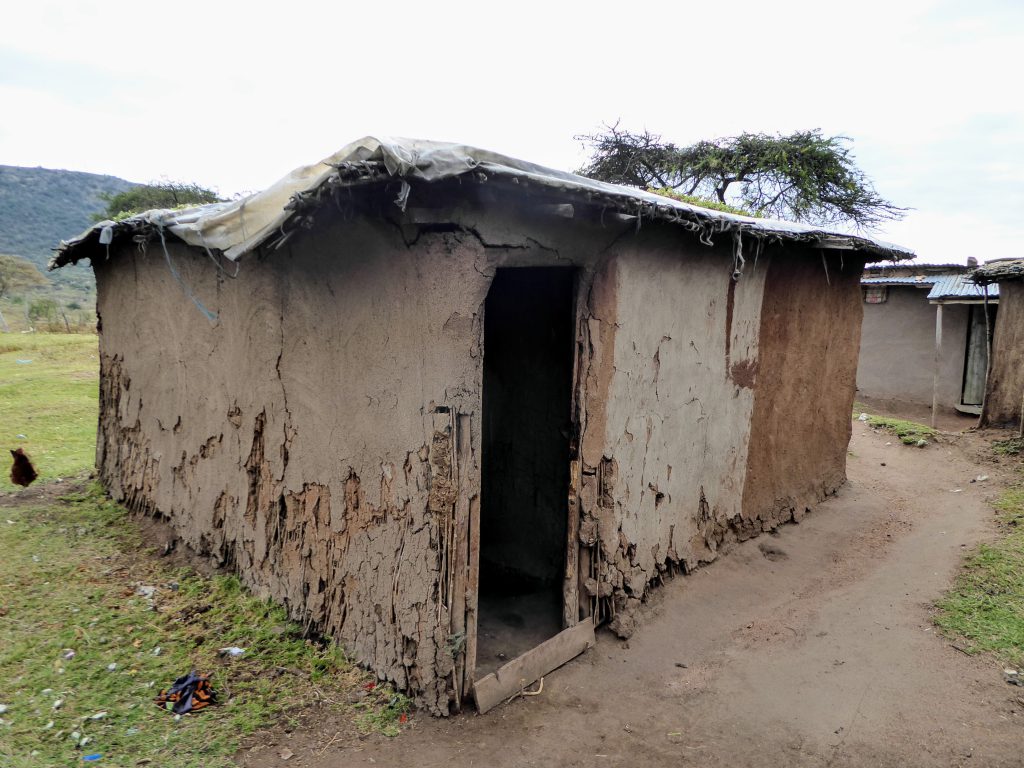 Would you like to sleep in a Masai village? 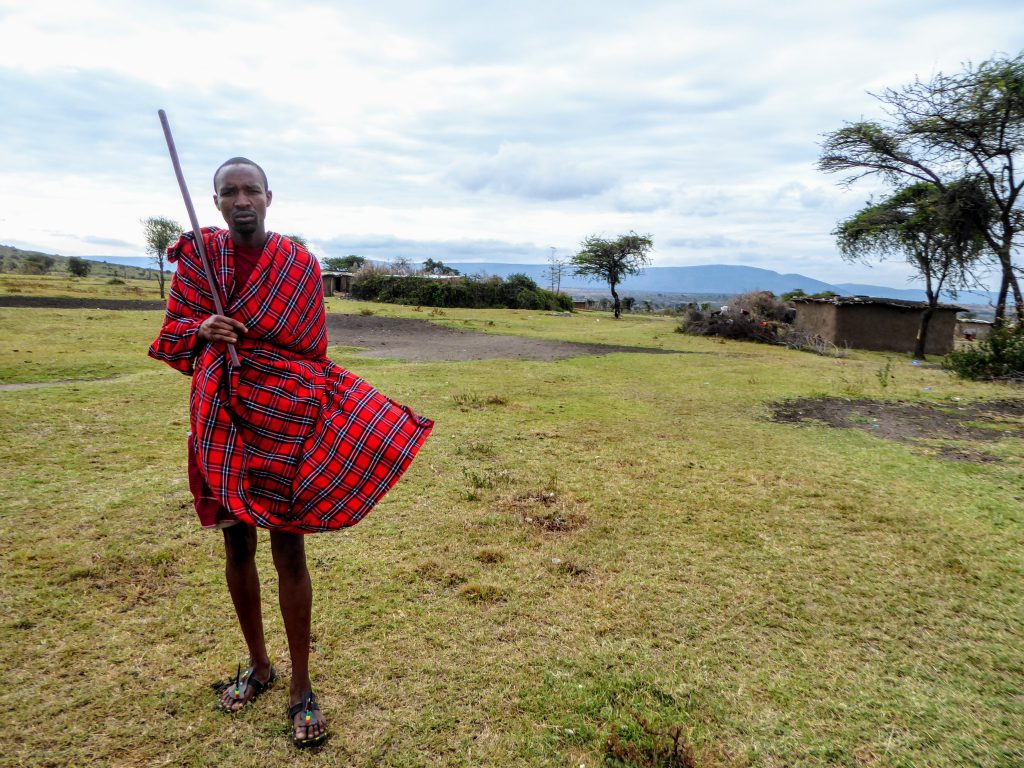 If you want a unique experience you can come and stay for a night in this village.
It was my last day in Kenya and if I knew on forehand I most defenitely would’ve booked this option. And if I come back… I got the mobile number of Sammy Mancha Mpoe and will share it with you if you would love this experience too!!

My short visit has ended already. I made some nice selfies with the men that gave us the tour. I also saw a lady with the traditional Masai clothes.

Don’t you just love it? 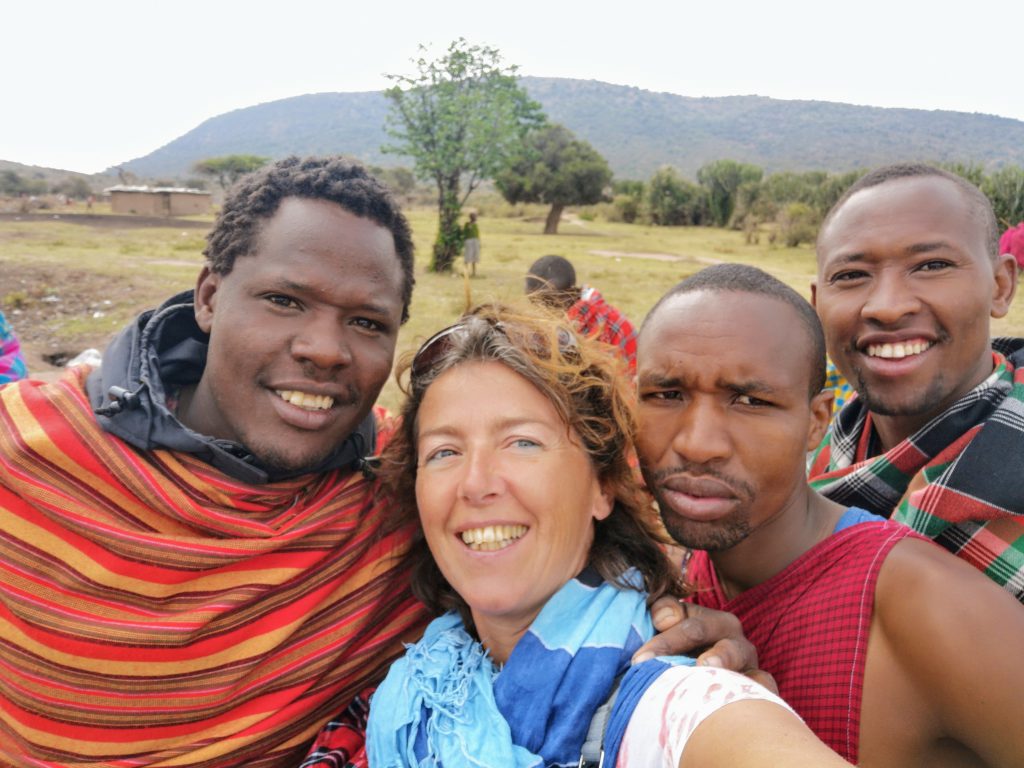 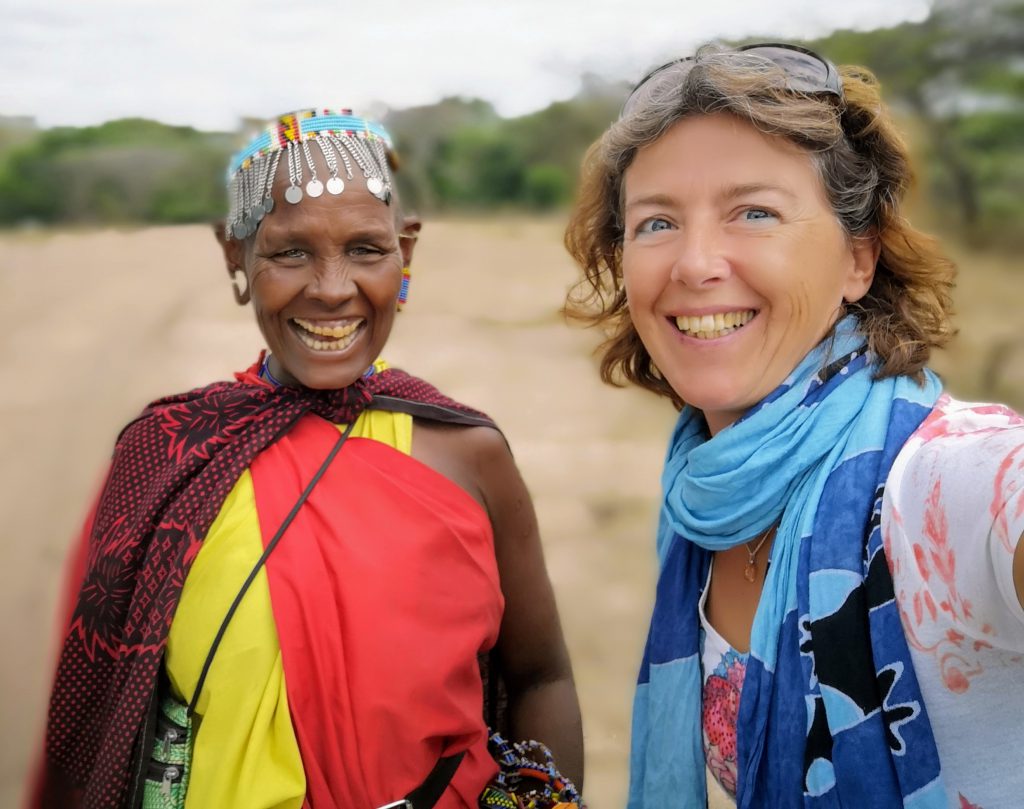 The story with this picture is that she didn’t want on the picture and at first was irritated. I did buy something but not from her hand. When she saw I had bought a mask she really liked to go on the picture with me 🙂

And I bought two of those nice, colourful cloths they are all wearing to keep warm. I got this picture because of that!!

Do you see the cloths on the arm of Sammy? They are in The Netherlands now 🙂 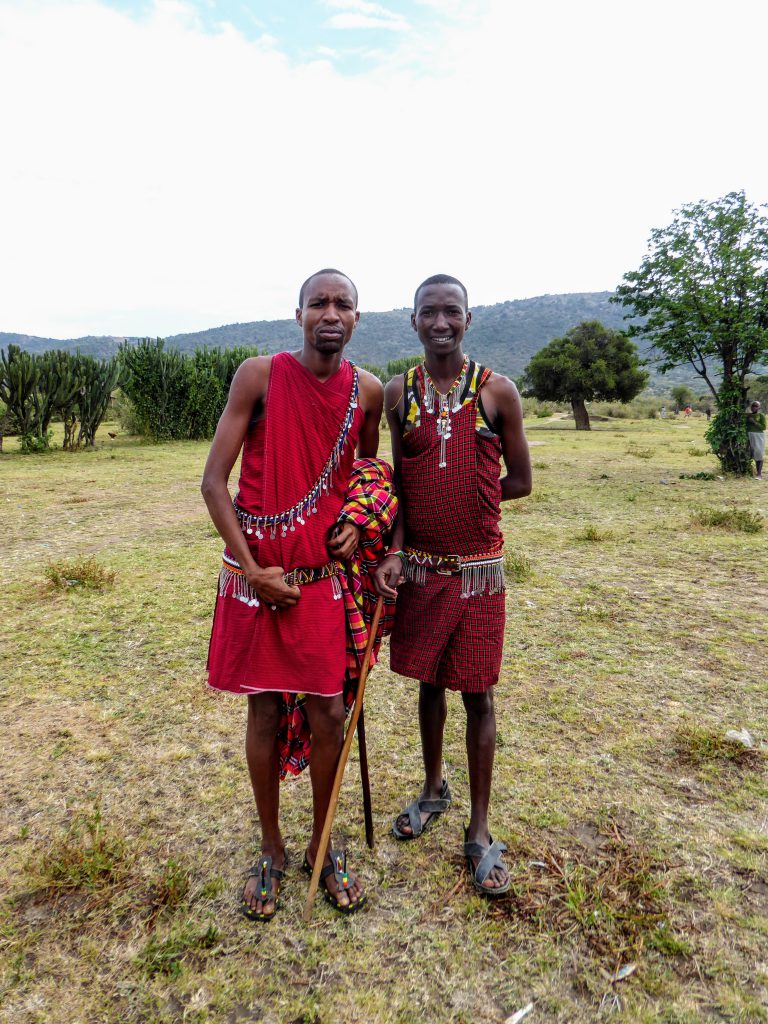 Have you ever visited a Masai village?

I would love to hear what you thought about it! 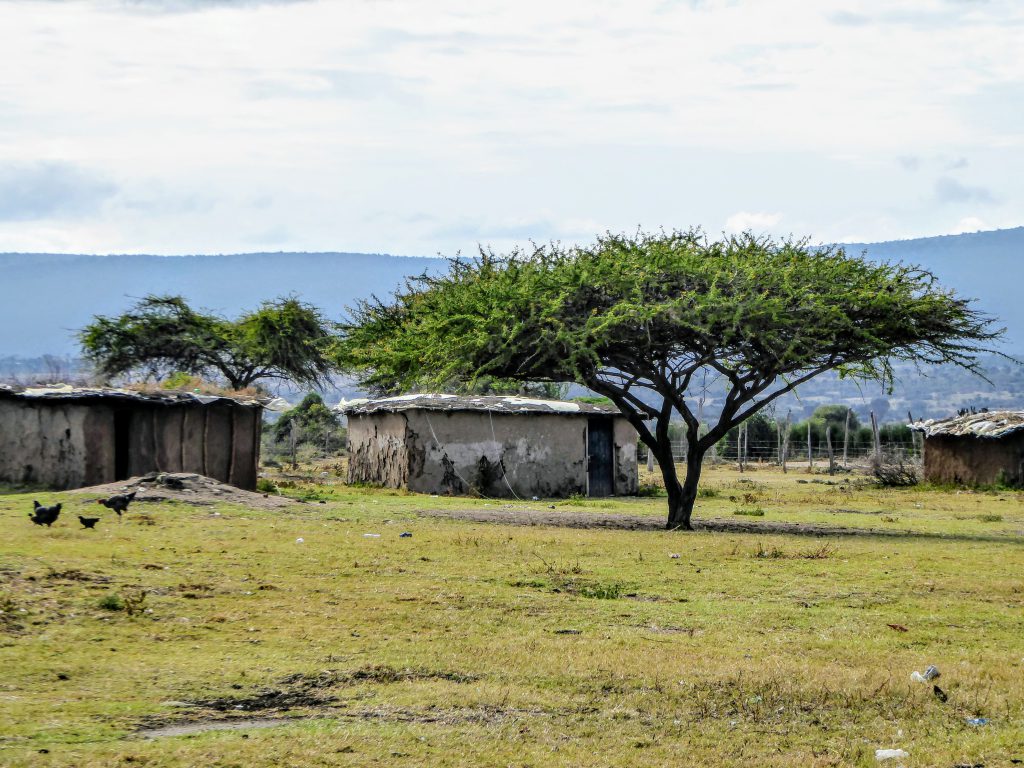 Contact me and I will send a message to Sammy, he would love to accomodate you! 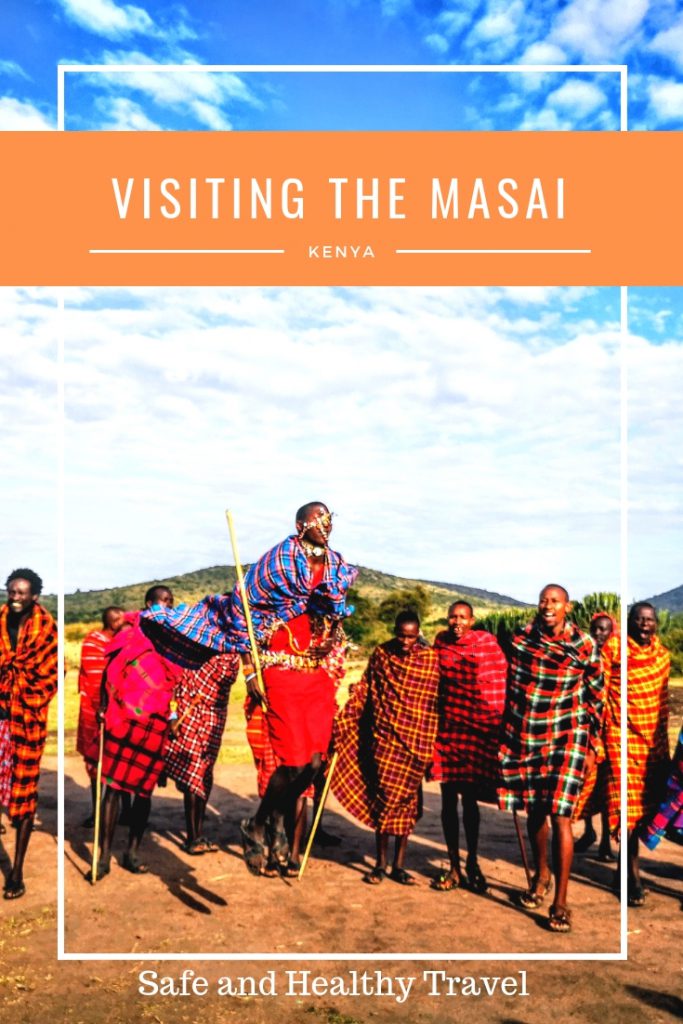 Soon more on Kenya on my blog

For now I can offer my travels from The Gambia 🙂

Having dinner with the locals –  Resirest

Surfen the waves of Kartong – Gambia

Or can I inspire you to go cycling?

Biking in and around the Old Medina Of Marrakesh, Morocco