I visited the Souks of Marrakesh, Morocco with my brother.. so for a change I was not travelling solo. Just for a short trip of 6 days to explore the city of Marrakesh and its surroundings. We really loved the city eventhough we were scammed on our first day. We were positive surprised by the beauty of the city and the great culture and history of this city!  The second day we rented a bicycle to cycle around the city. We wanted to go around the wall, around the old city, the Old Medina and just explore the city by bike. And let me tell you immediatly: I can really recommeond you to go biking in the old medina Marrakesh.

We started biking near the Koutoubia 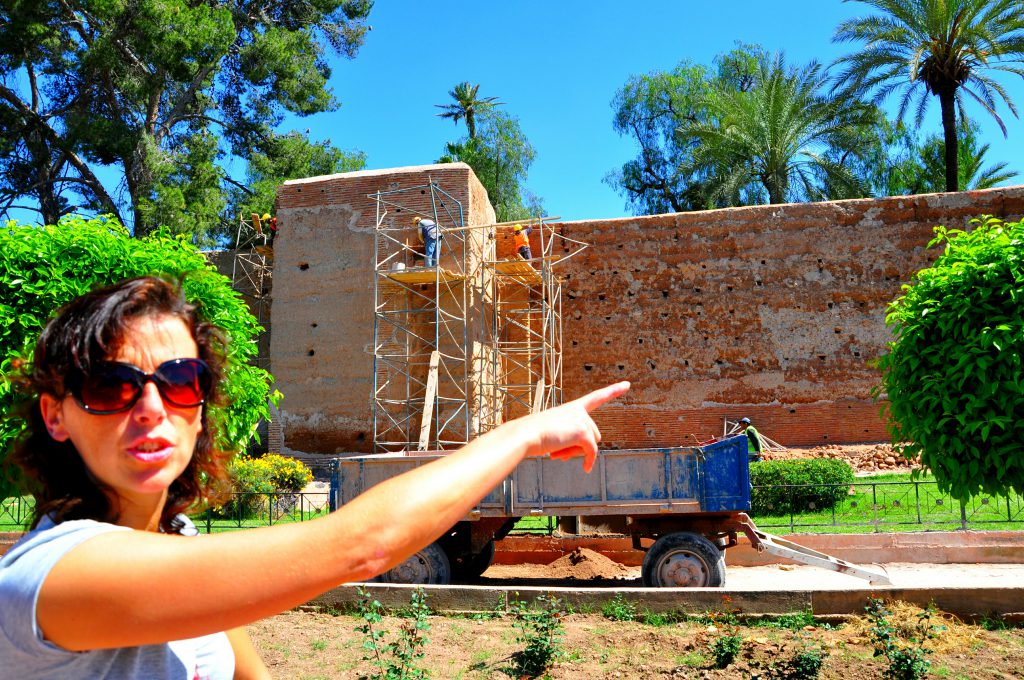 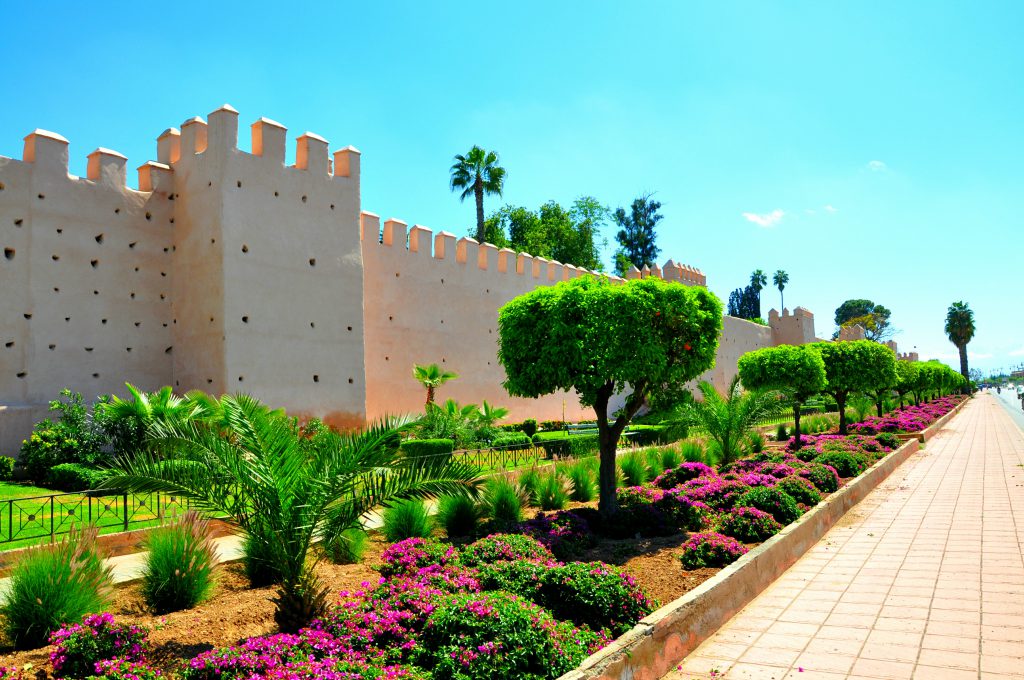 We went right and started to bike on the sidewalk. Stopping at several spots and looking at the wall and at the people who were working at the restauration of the wall. At some point we entered a big roundabout, if you would turn right there you will go to Garden of Menara.

Biking in the old medina of Marrakesh

Before biking in the old medina of Marrakesh we wanted to bike around the old medina so we cycled along the wall. The wall on the one side with all the great old gates and the moroccan landscape on the other. For safety reasons we cycled a part on the sidewalk which is big enough for cycling and walking. They are working hard on restoring the wall and taking care of this old pink wall. 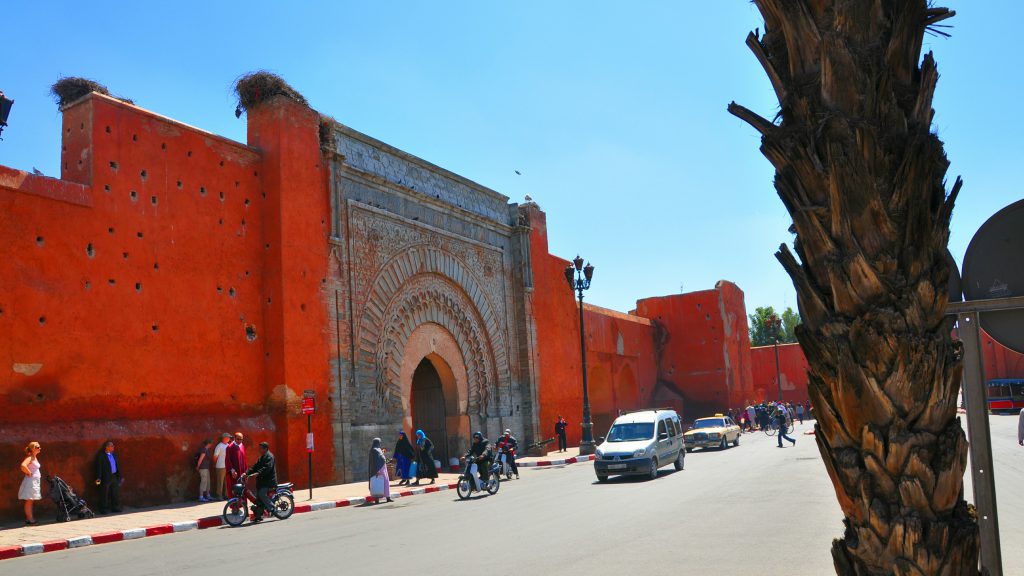 What Great and Wonderful Gates!!

After two turns we entered a gate, we really liked to look of it so we stopped and went through the Bab Er Robb. We saw then the great Bab Agnaou, I regocnized it from pictures. That Bab is build in the 12 century, the time of the Almohad Dynasty. On each side of the Bab is a canon. The name, Agnaou, refers to black people or land of the black. This is probably because this gate faces the South side of Africa.

The look of the street after the gate was very inviting so we parked our bicycle and went in.We couldn’t resist any longer.. Exploring the Medina for a short while. We found a good part to park or cylce and locked them on the traffic sign in the middle of the road 🙂 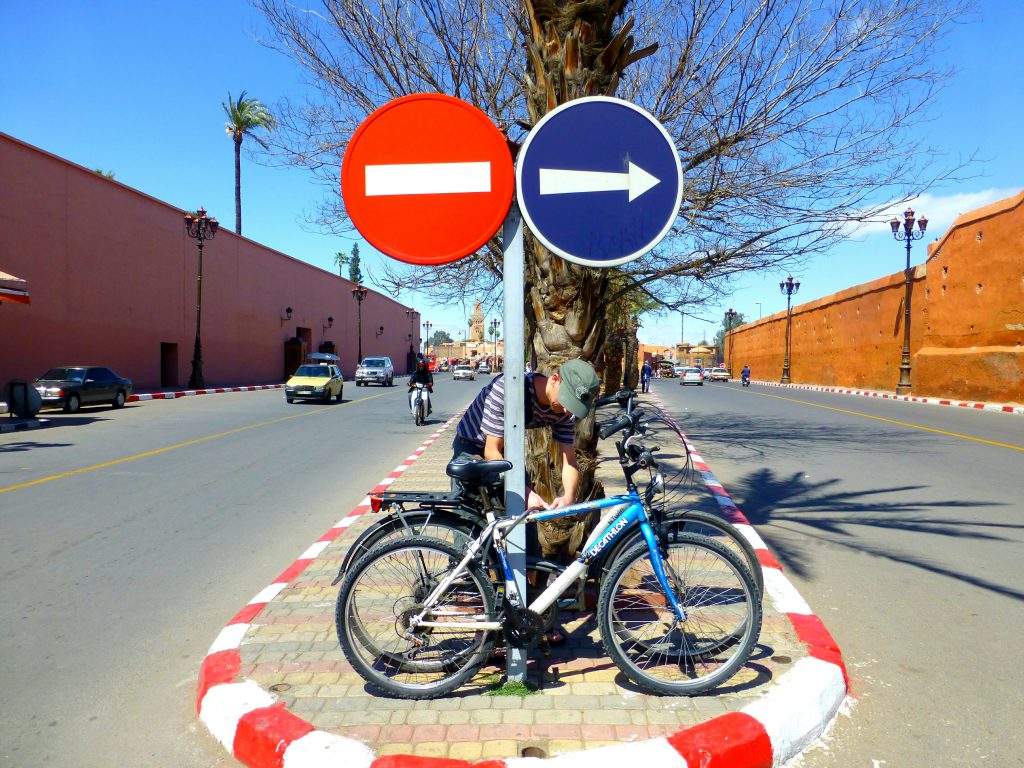 In the street just behind Bab Agnaou are a lot of nice but also touristic shops. We went walking and soon we saw the building where the Saadian Tombs are. It didn’t seem very inviting and the costs were high so we didn’t enter.

In front of it is a very nice Kasbah where you can eat and drink. We sat on the rooftop terrace and had a nice Moroccan tea. 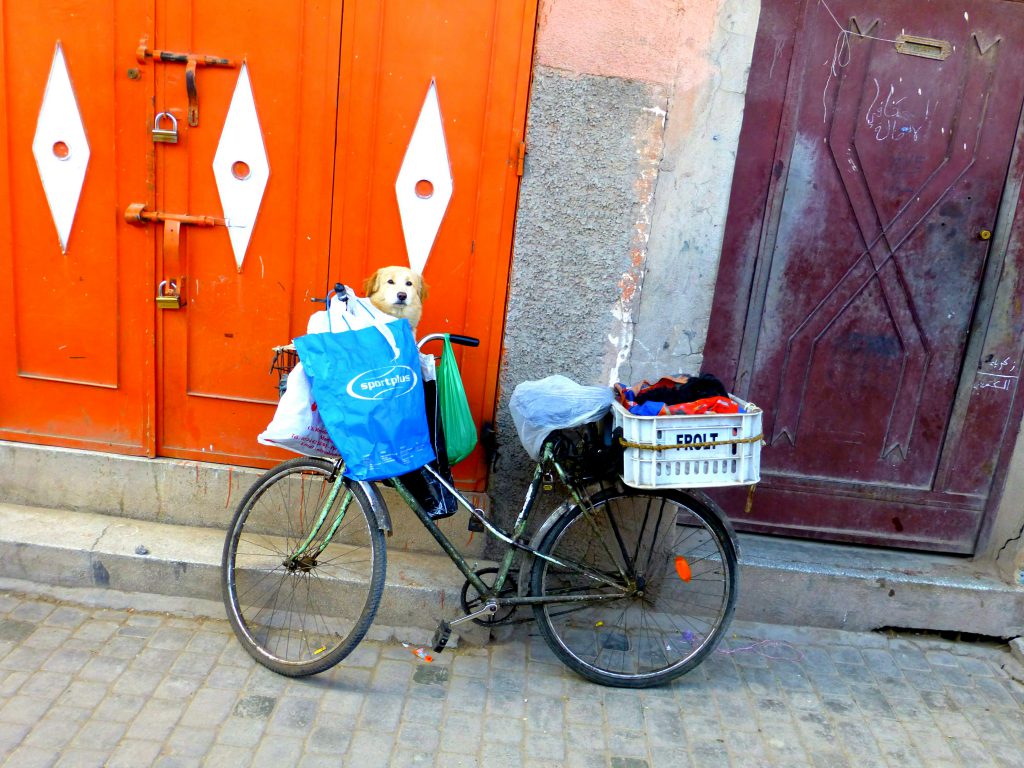 Biking in the old medina of Marrakesh – Morocco 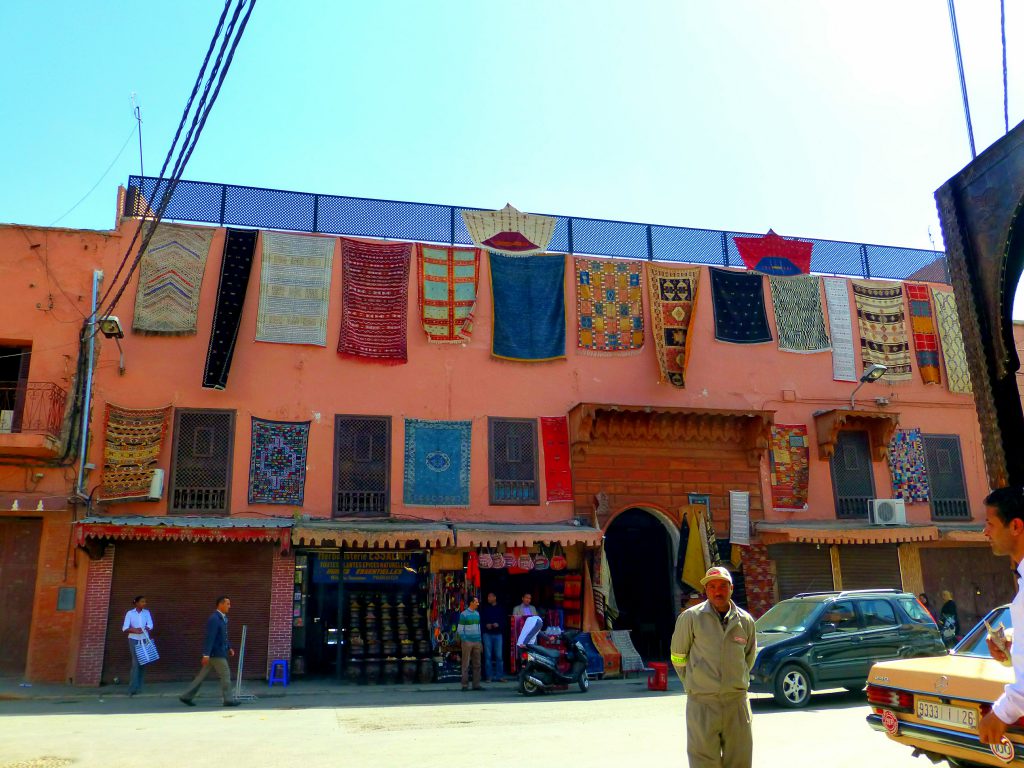 Biking in those little streets of the Old Medina

also called the Souks of Marrakesh

After that we started to bike again. We went into the Old Medina. Going into the suburbs of the Old Medina and biking along the streets and seeing the people of Marrakesh in there own neighbourhood. They were working and just doing they’re business. We saw children going to school and the mothers doing groceries. 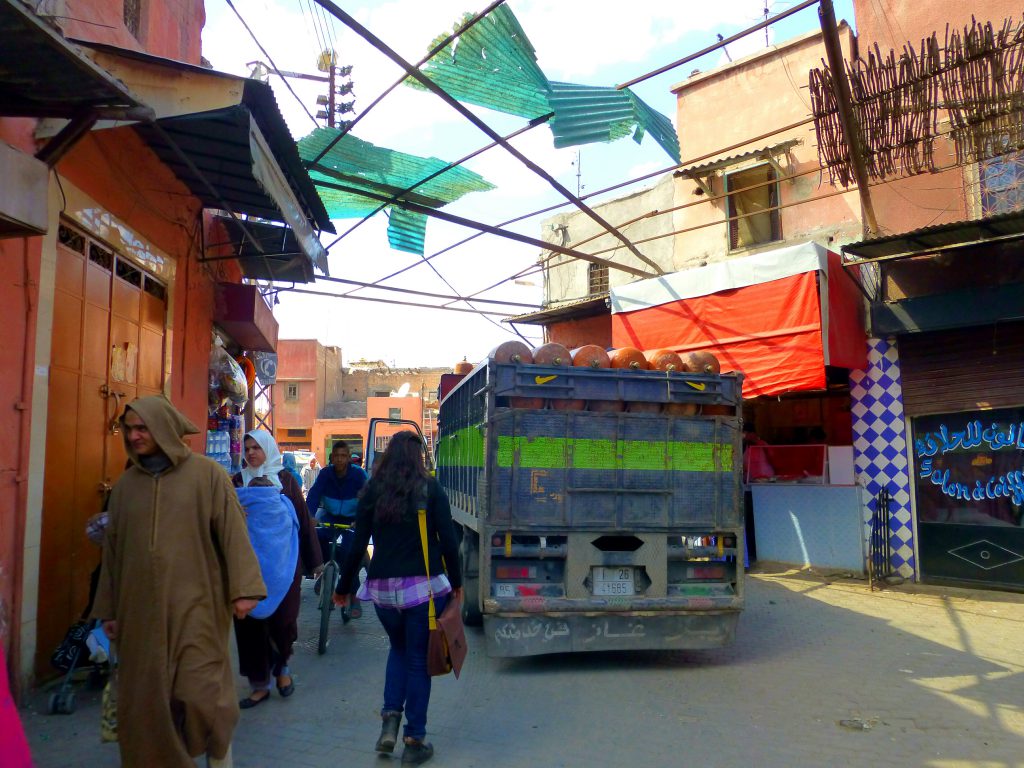 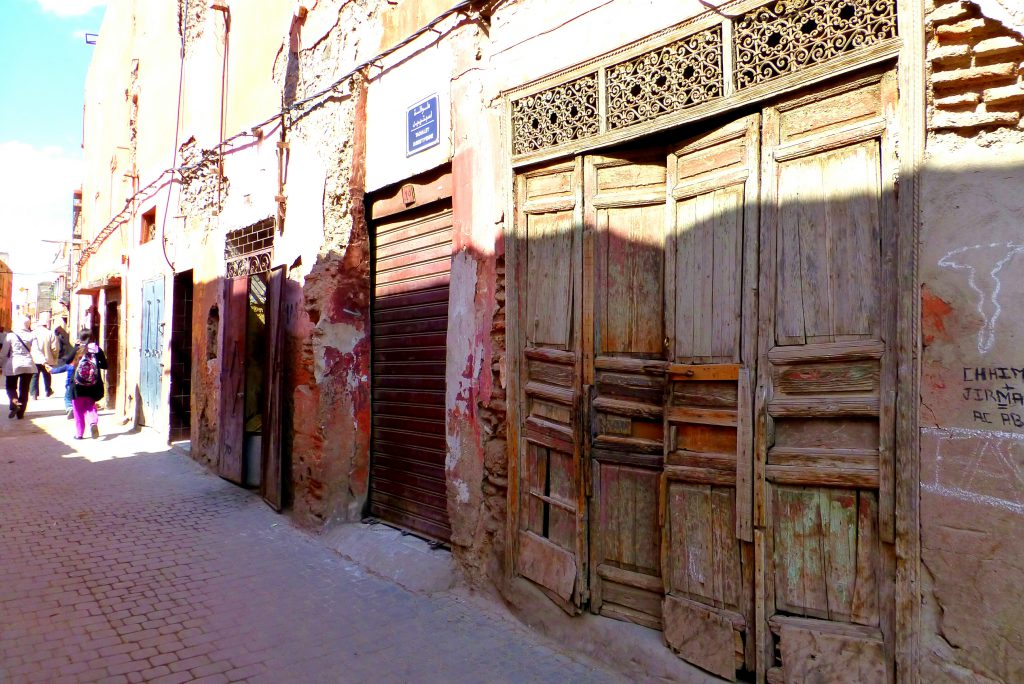 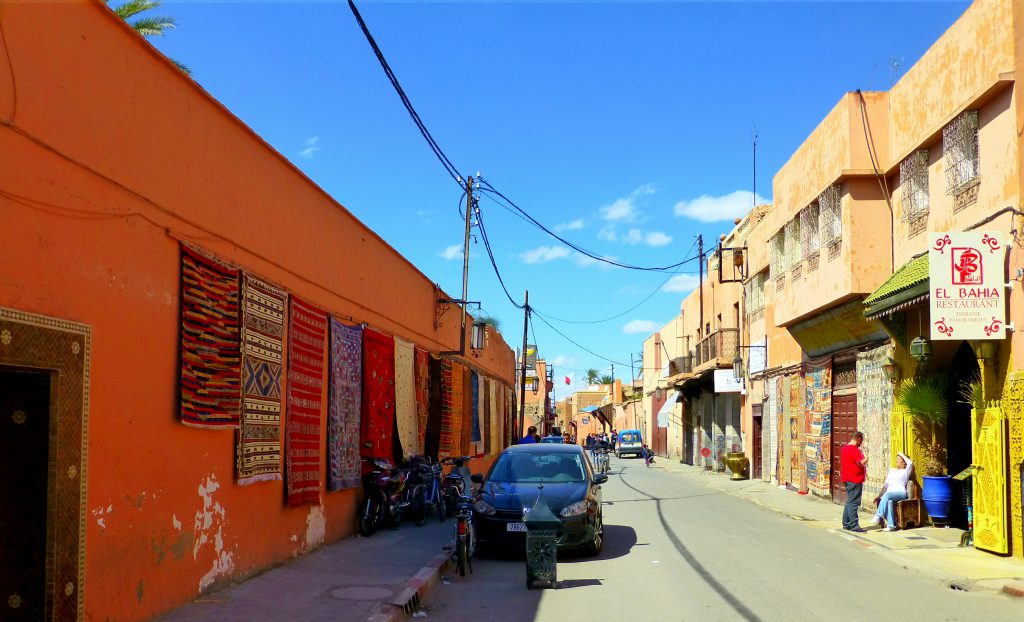 We were biking in the old medina and came along the famous Bahia Palace so we parked our biked and went inside. It is a very nice palace with great gardens, it’s great to get out of the busy streets for a while and visit this palace.

Everything in the palace is decorated, from floor to ceiling. The whole palace has several gardens and courtyards. The hallways are really great with very big, old doors. And I really loved those waterbassins in the middle of those courtyards. You see those a lot in Morocco.

I thought Bahia Palace was really worth a visit!! 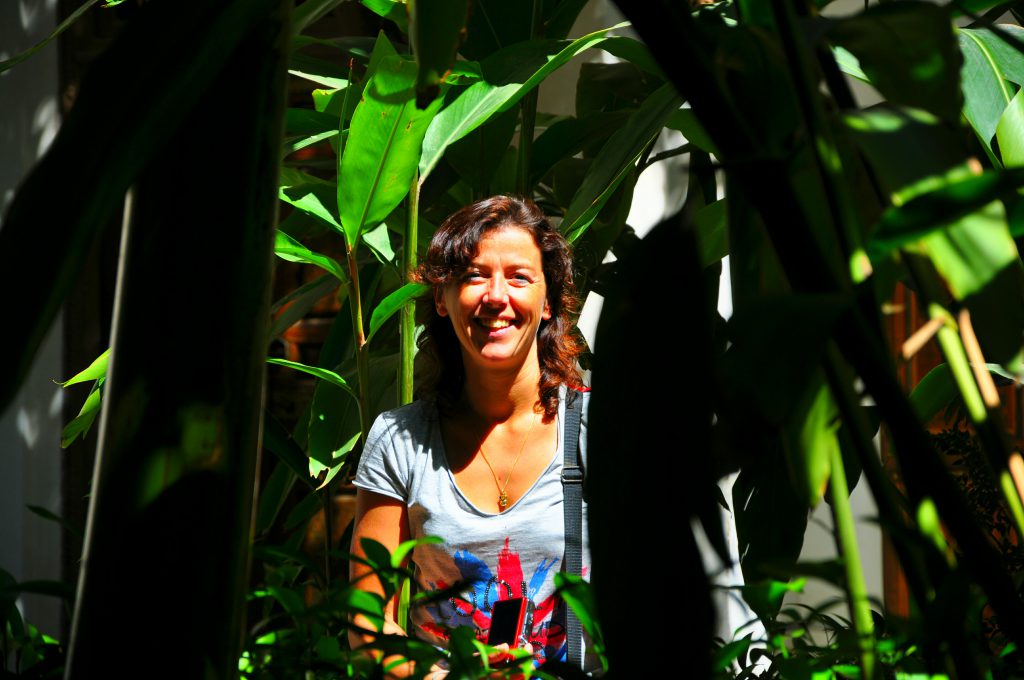 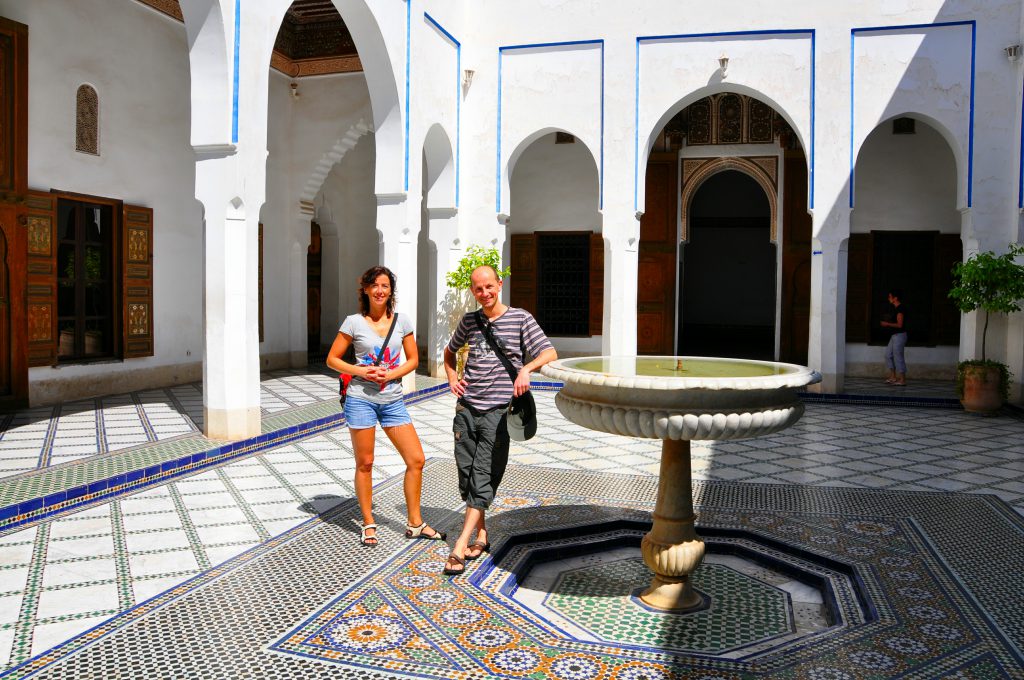 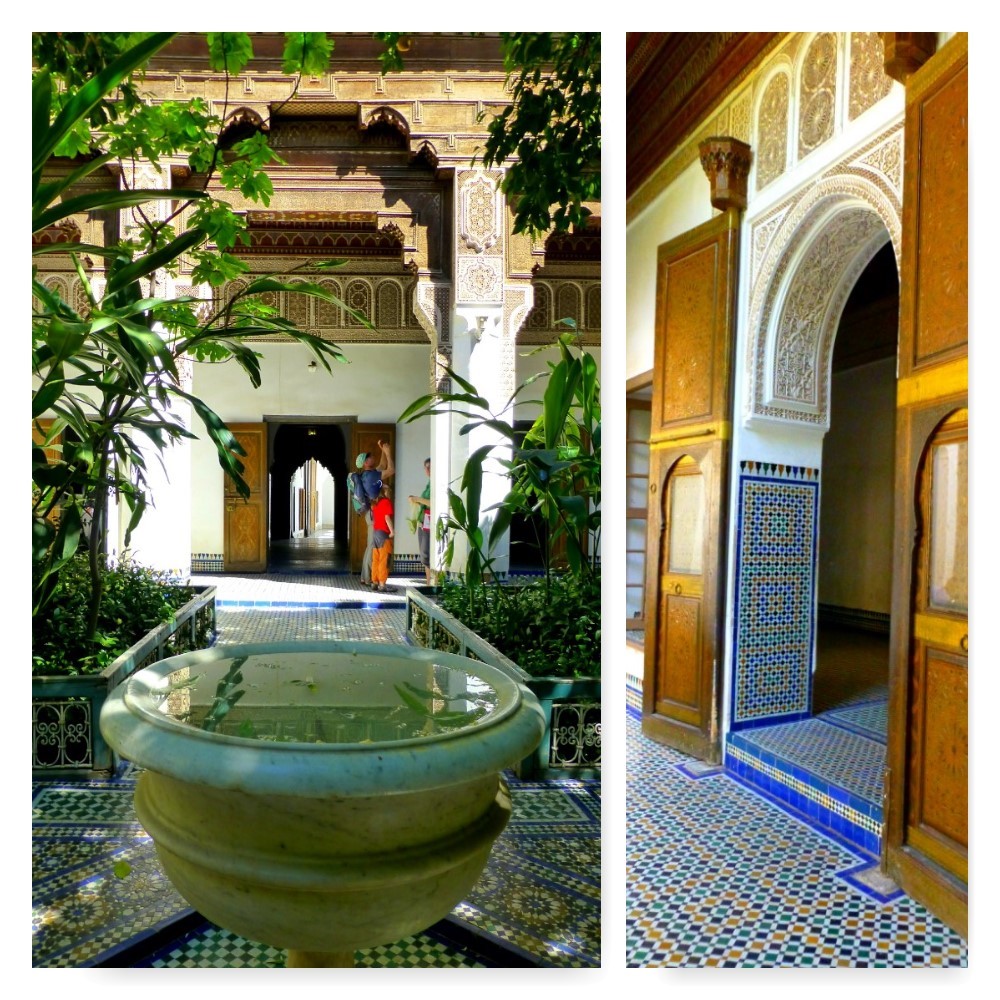 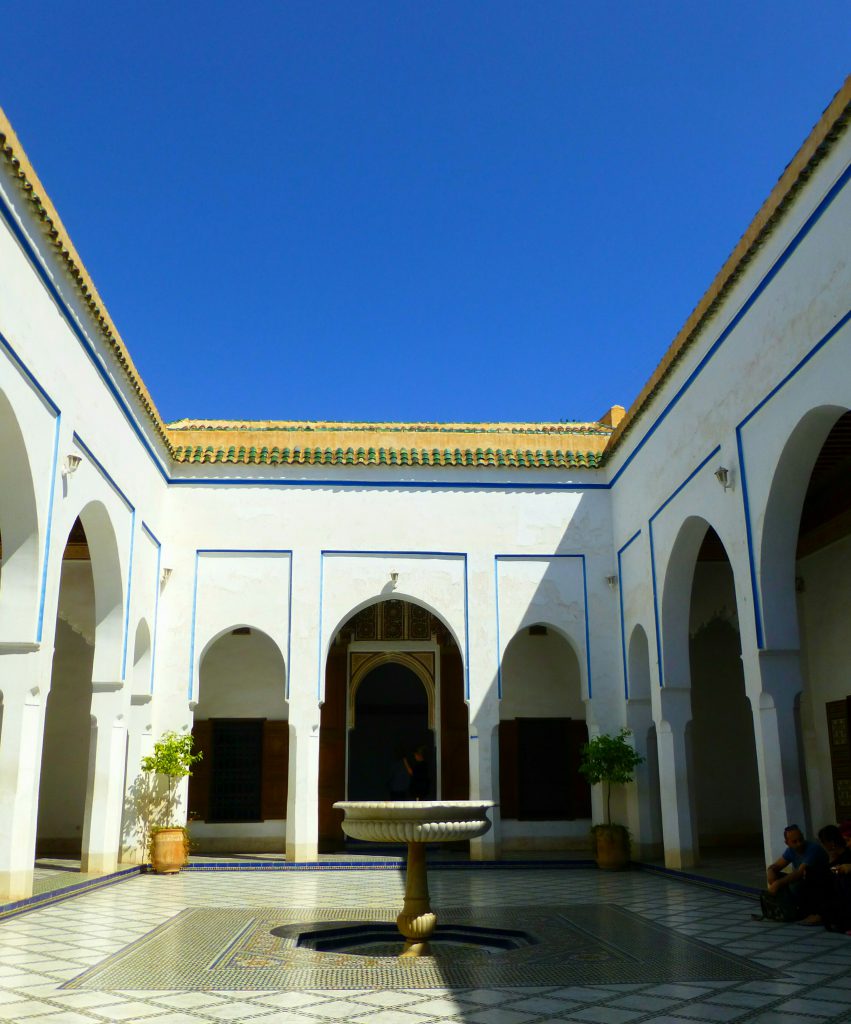 After biking for a while we were at the other side of the Old Medina, we saw the great pink wall again. We went through a bab again. I don’t know the name of that one.
On the other side was a newer suburb. We had a great time. My brother took pictures of me while biking with the camera over his shoulder. I didn’t thought he had me on one of those pictures….but he had them, all of them were good!! I almost had a stomachache from laughing 🙂 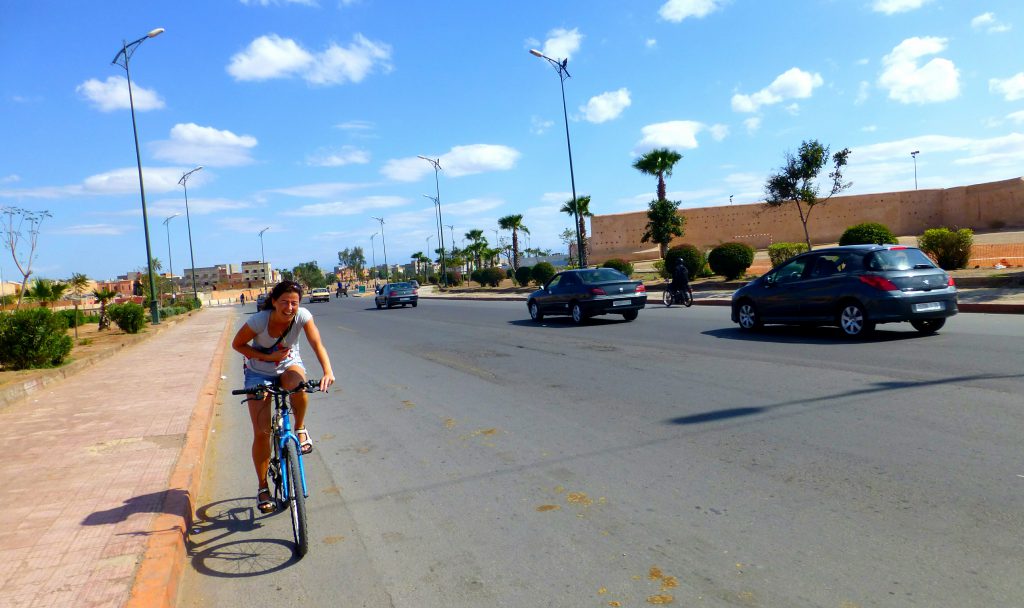 We had just the best day
Biking in the old medina of Marrakesh!

We had so much fun and saw so many beautiful spots!! 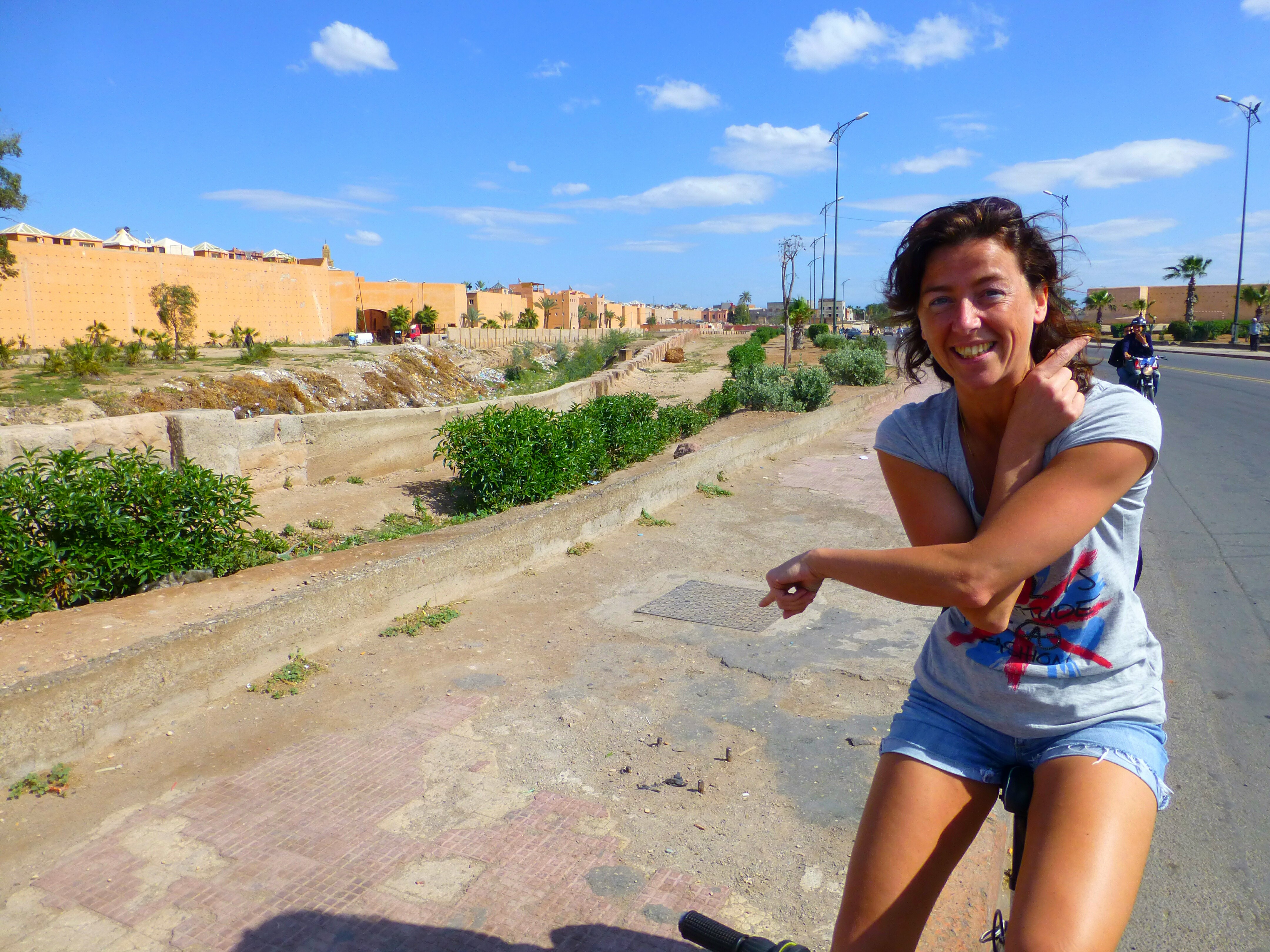 If you liked this tip will you share it on your socials?
You would make me happy 🙂 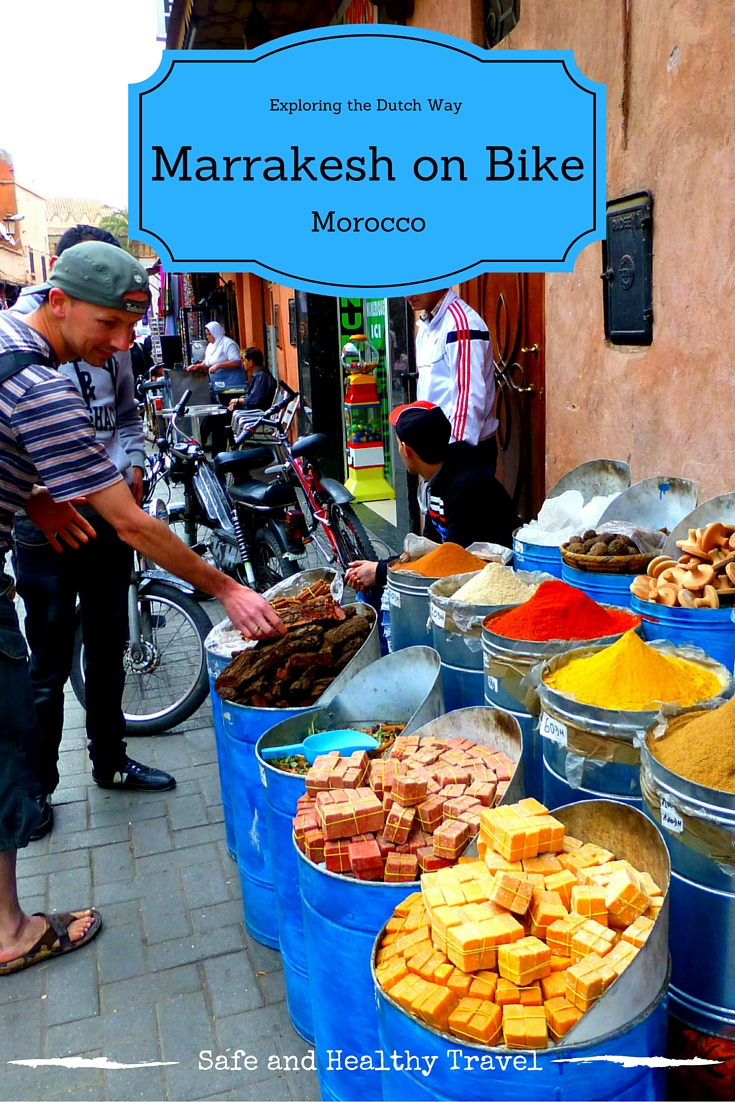 Can I inspire you to travel to other places too?

Travel Guide Fez – What to see in Fez, Morocco

What to do in Nairobi – Kenya

Do you walk the path to happiness?

Enjoy this moment.. Path to happiness