My last post was about my first 200 K’s that I walked on the Camino Frances. Now I am well over the 400 and it is time to tell you about that second part!!

I started early morning because the weather would be warm again. I had problems with my little toe…There was a blister at the very tip of it…and that tip of the toe is tucked underneath the toe next to it..

It was a warm day but at 11.30 hrs I was at the albergue and could start to enjoy the swimmingpool they have!! There was a market to enjoy in the centre. I bought some delicious dried fruits over there!! 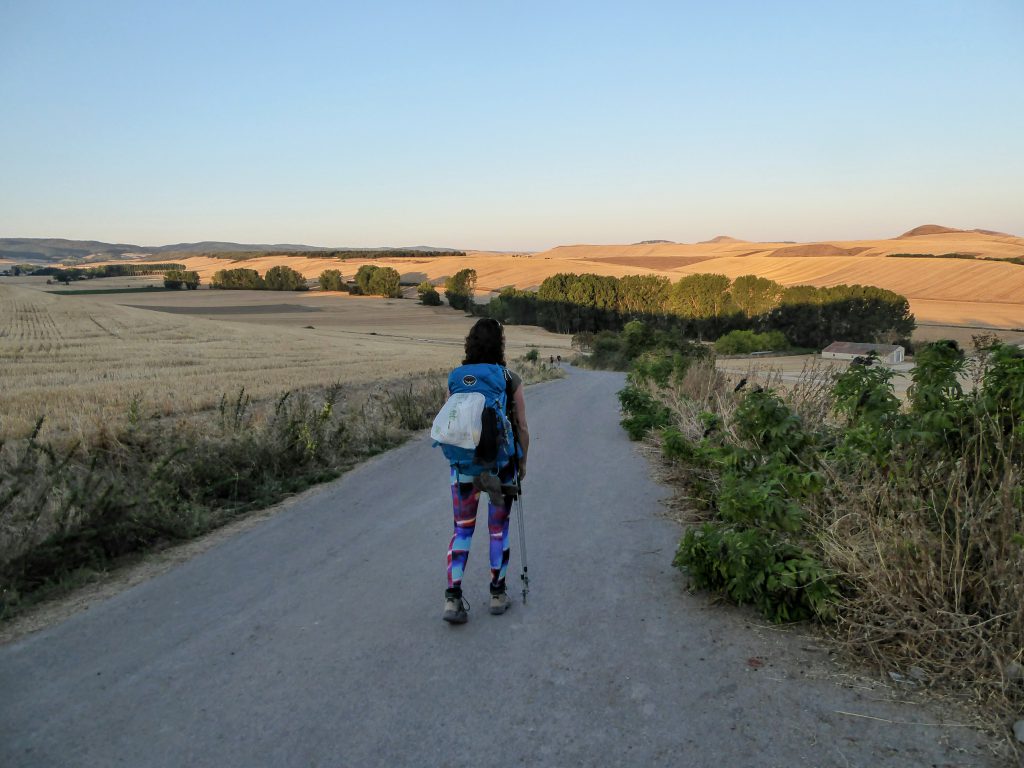 This day started with a little bit of rain. I was happy it started just outisde the village where I would have my first coffeestop and after my coffee the rain had stopped and I could go on!  My initial plan was to go to San Juan but there were only 40 beds and the next village was 4K so I walked on. Just before it started to rain again…and this time really hard…I was at the albergue again and was sitting nice and cosey at the bar with a Cafe con Leche!! 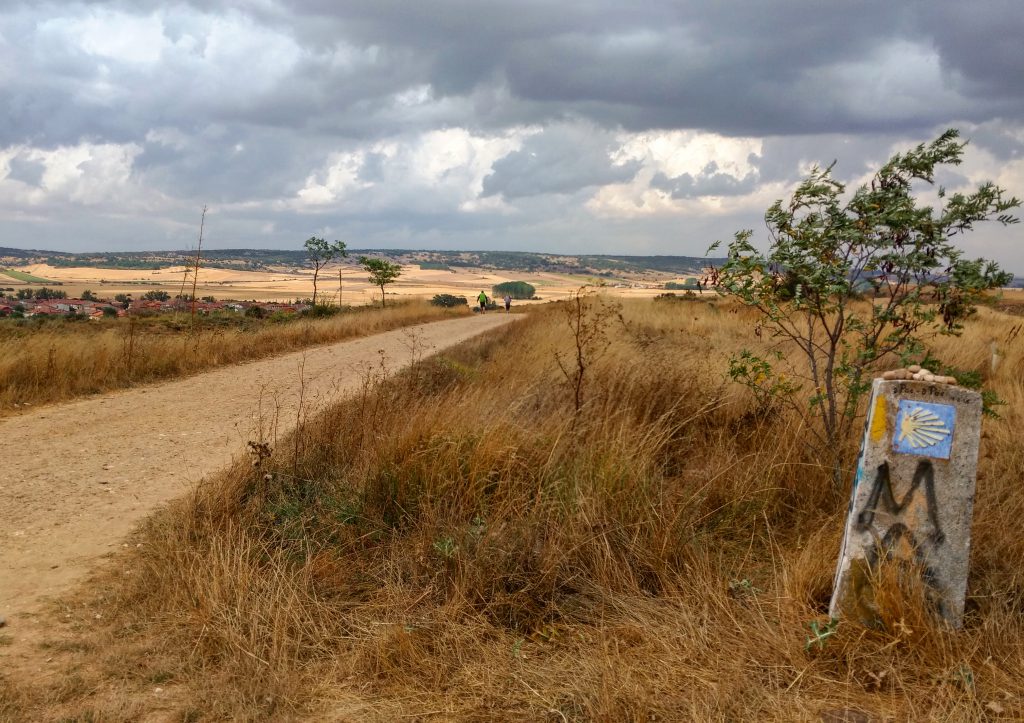 It was cold the morning I left Ages. It had rained a large part of the night and I was freezing cold for the first time in Spain. I walked a fast pace to get myself warm and it worked…especially with that great climb up a hill that was rocks all over! It was hard but finally up we had a great view over the surroundings…especially with the sun just rising!! 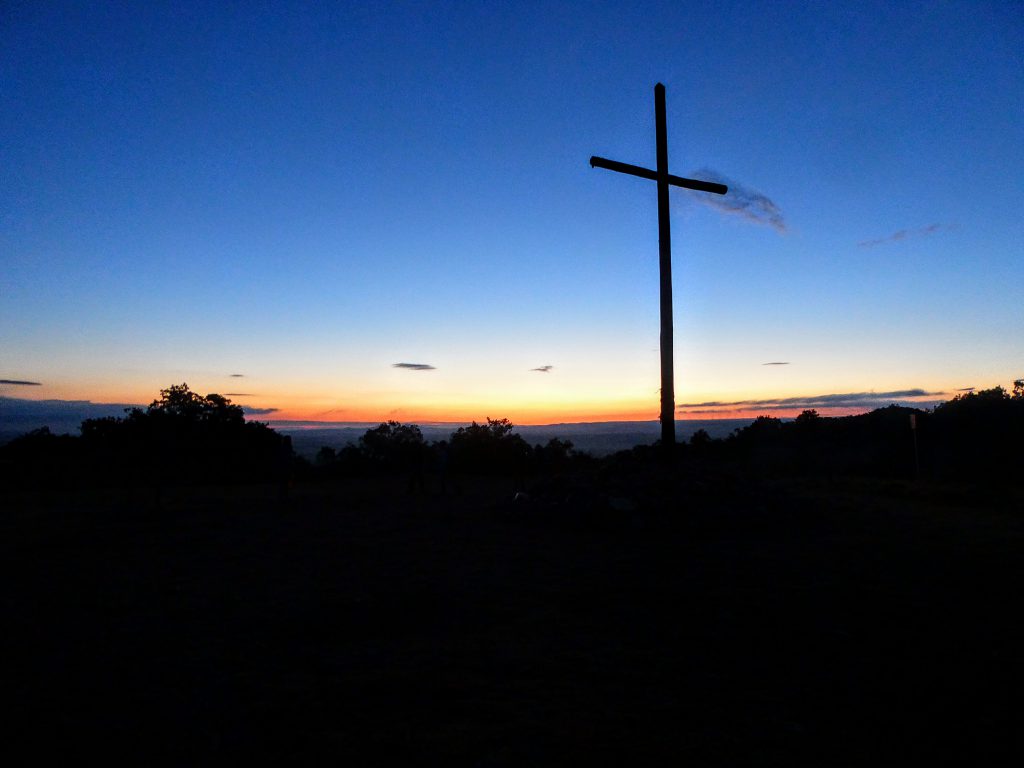 The next part was just walking to Burgos, I met some Dutch guys and a women from Drenthe living in Switzerland with her husband and we walked into Burgos together!! 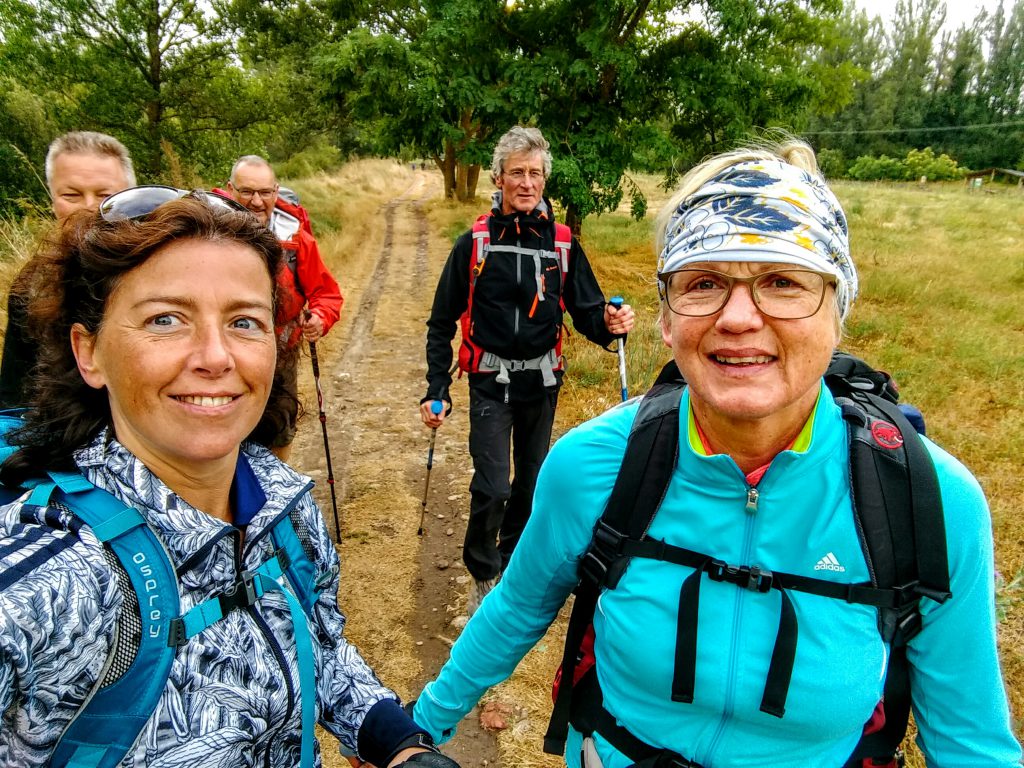 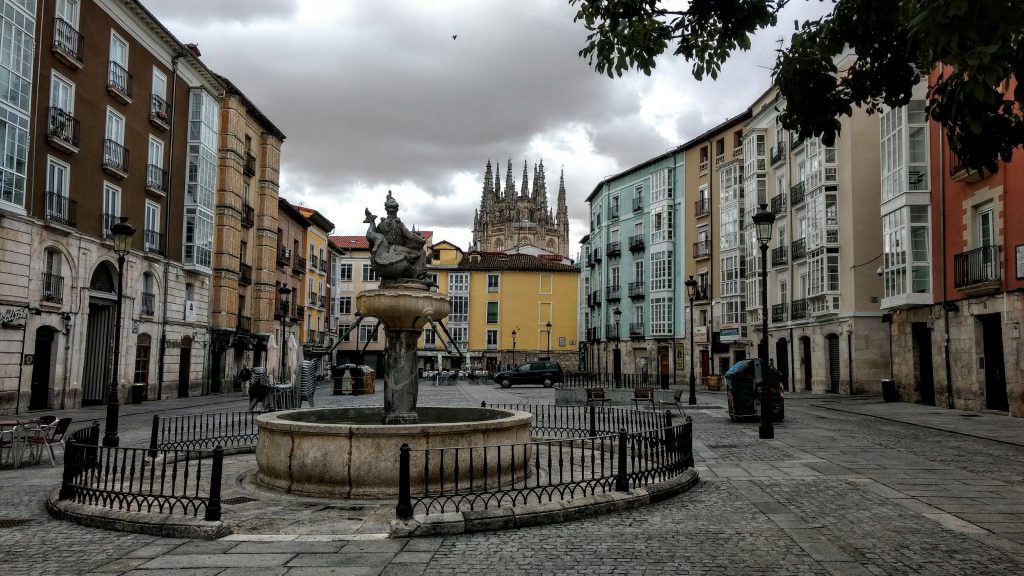 Day 13 was spend in Burgos. I walked a couple of K’s around the city 🙂 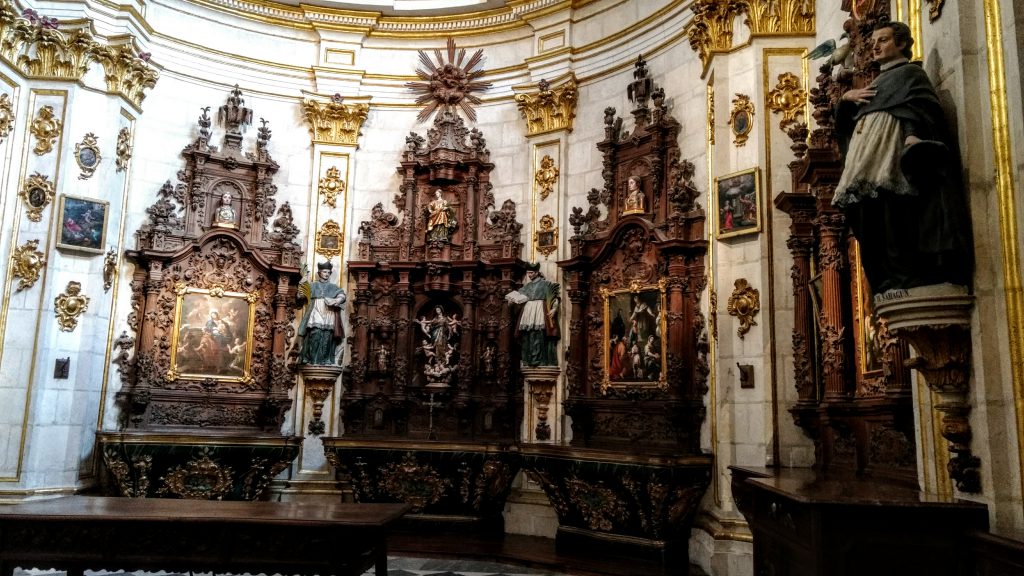 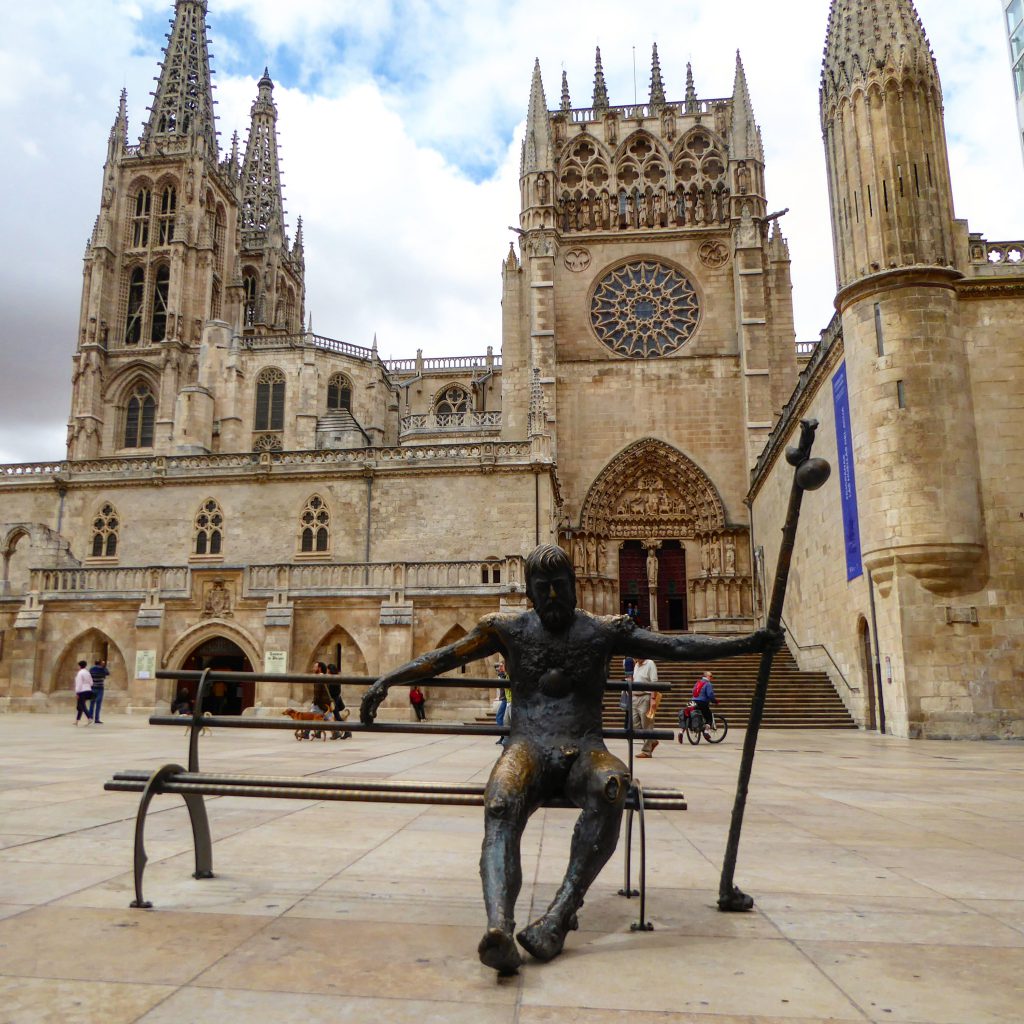 The next day I had to go again, walking the Camino was where I came for….so here we go again! I started to walk with John, I met him 2 villages back in the swimmingpool and we met in Burgos again. Had some great tapas and decided to walk out of Burgos together. After 10 K I wanted to walk a bit faster so I left him behind.. To see him again 10K later….when I was sitting down and feeling bad because I had 4 blisters…. Yes… 4 blisters!! two on each foot!! This day of rest in Burgos hadn’t brought me what I wanted!! 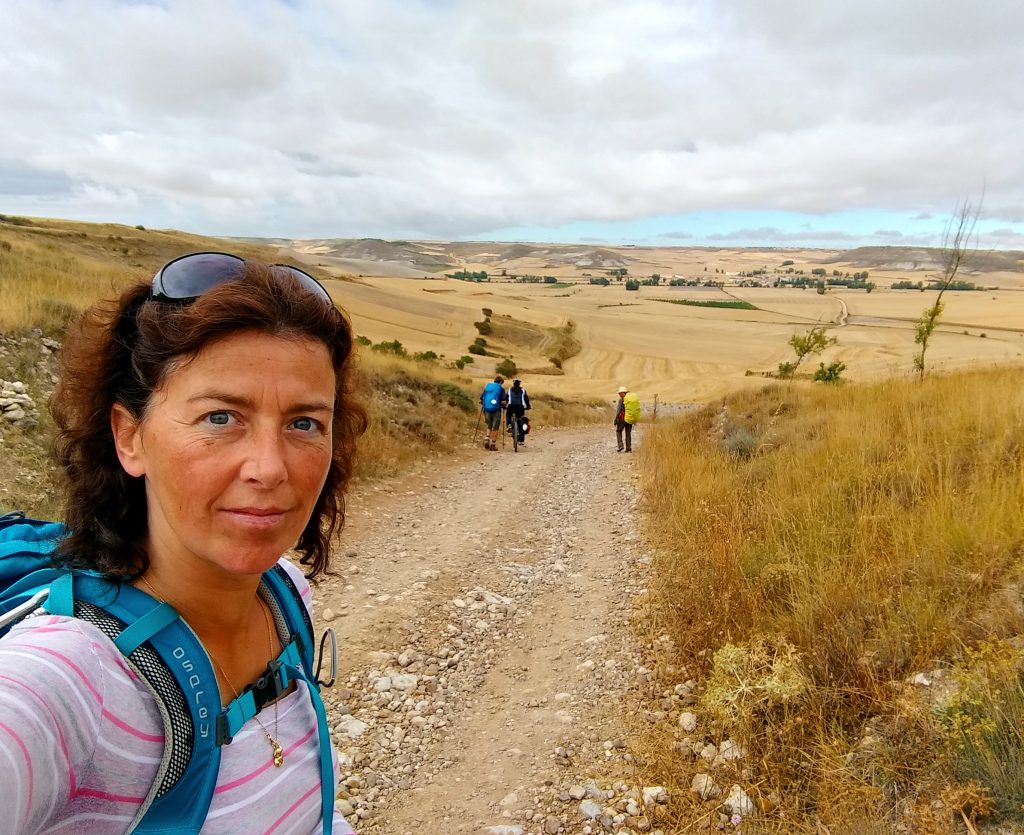 I felt pain … but I kept going… on those horrible rocky roads!!

To my surprise John was walking with Marianne, also Dutch, I met her in Roncesvalles on my second day!! We slept in the same part in the big monastry there!! We started to walk together because there was no bed available anymore and we had to go for another 10K.My feet were killing me but I made it…over 30K today!! This again was a hard day for me. My blisters were hurting. I had one on both sides of my heels…not on the backside but the inside… And there were blisters on the little toes…both side and the left foot had one at my big toe… That was bad!!But I went walking…I had to go on, not give in!! Just 20K or something… Marianne and John were so sweet…they walked with me! I wasn’t alone in my struggle! 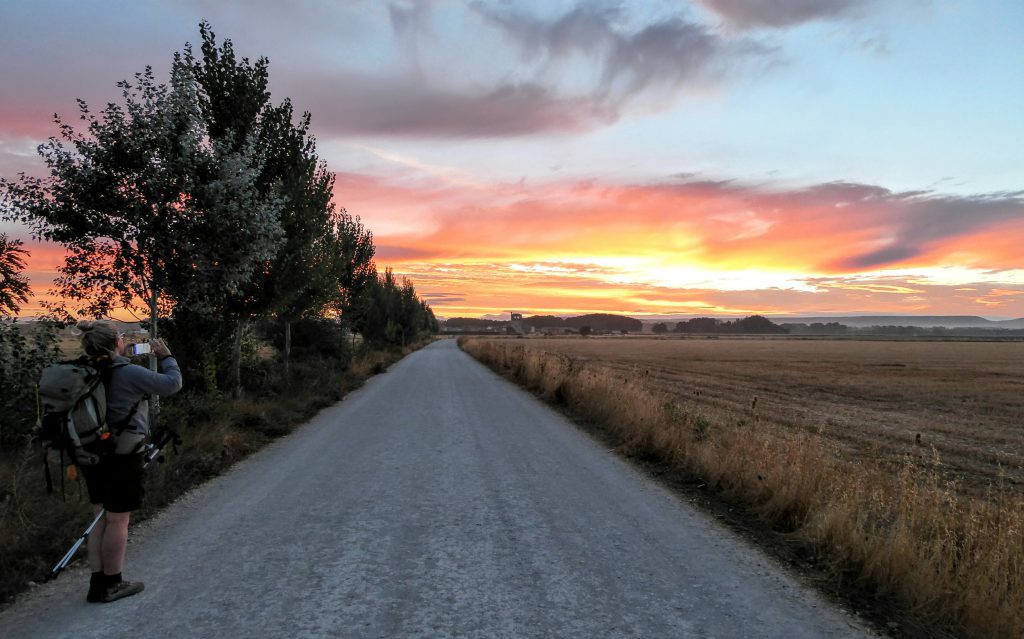 Marianne taking the picture of this wonderful sunrise!! 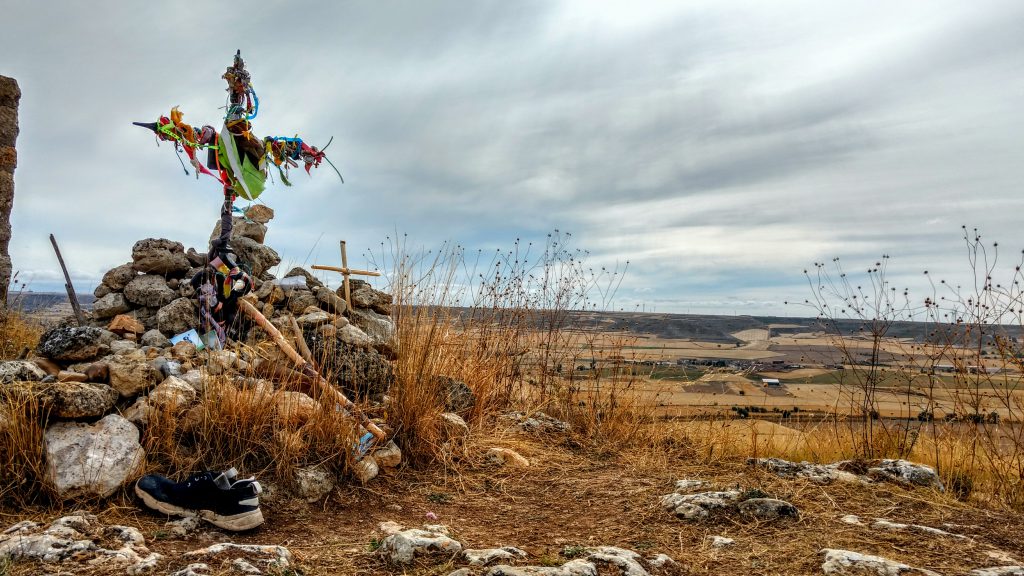 On top of the hill we had this great view!!

The shortest day… My feet were bad….so painfull.. But I had to go on. I thought that if I would stop it would not get better but even harder to start again… So just as far as I could go. After the second village I was so happy for that great new albergue where my friends…still with me…wanted to go too!! It was La Finca, a great place in between Fromista and Poblacion de Campos! 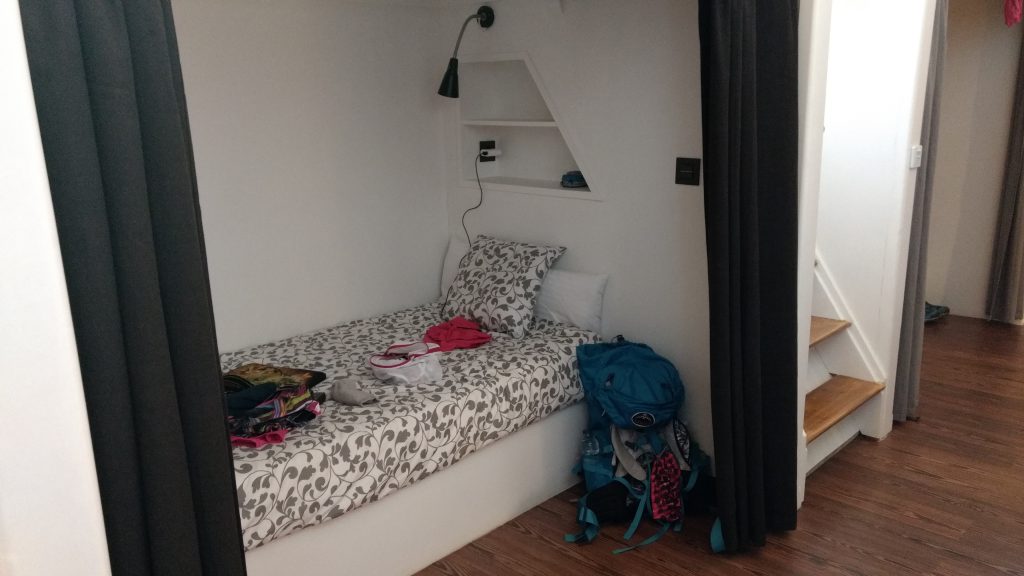 This day I started to walk alone again. John had met an old buddy of his and Marianne had to speed up if she wanted to be in time in Santiago. She had to do 25 K a day at least. So I started a bit later then normal and walked slower… My feet still hurts but slowly it got better.. I unfortunately took the scenery route…which is a bit longer.. I thought I took the other one though! I went to the monastry Espiritu Santo and had a bed there. I liked the city and the place! 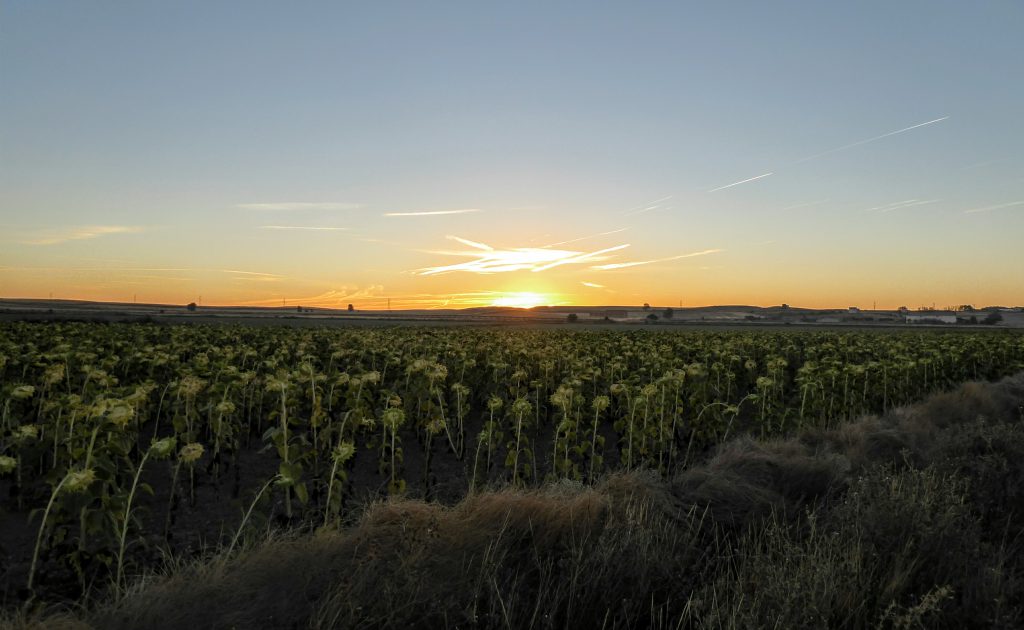 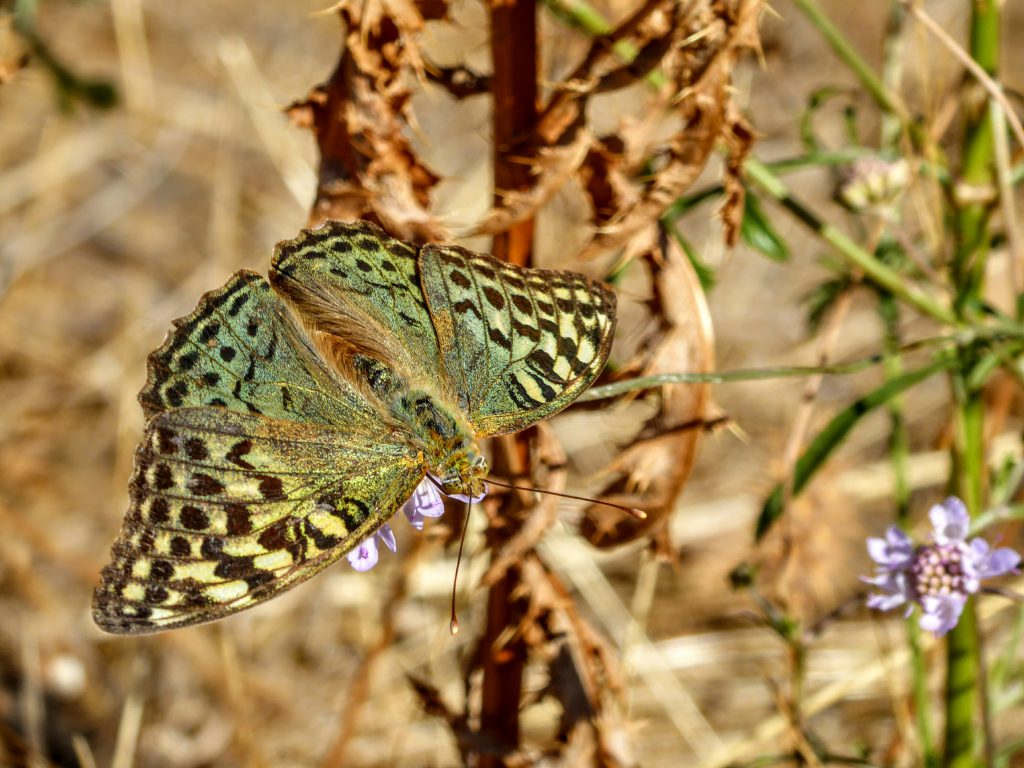 How we line up our shoes at the albergues 🙂 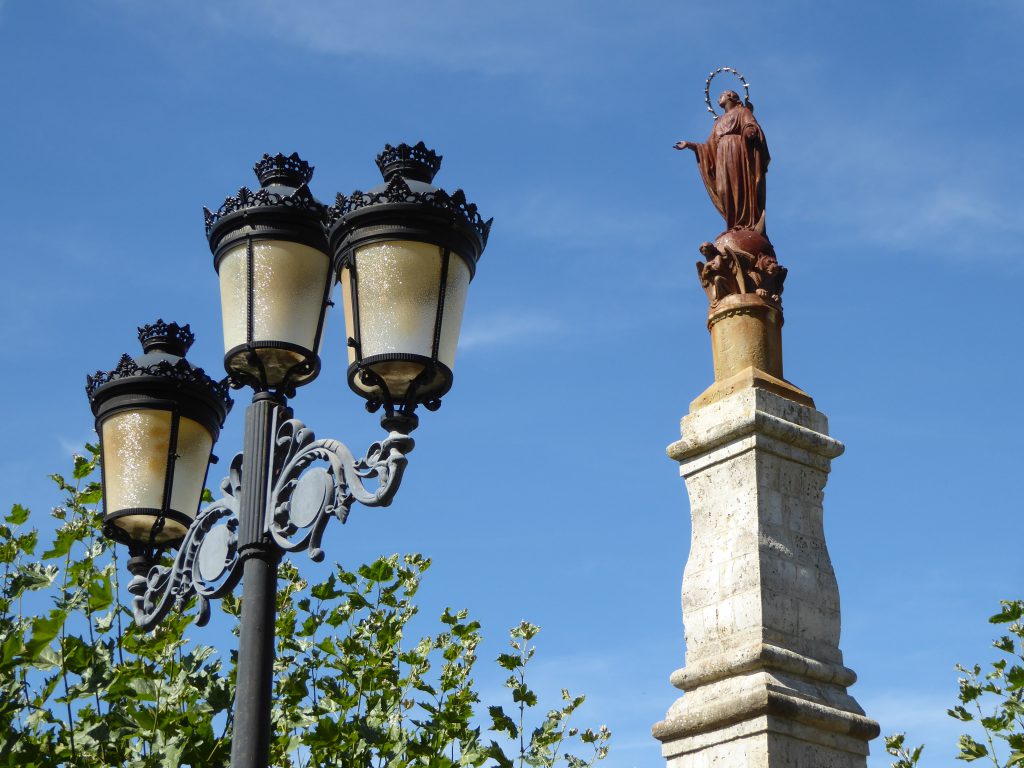 In the city of Carrion de los Condes

Left the city around 8… I keep starting later… making shorter days allows me to do this. Getting at albergues later then 1 in the afternoon is not good…beds are given and you have the chance to be send away. But today I had to walk a 12 k road and some…that is what I expected. I started that one long road….and after almost 2 hrs I saw the sign that it was still 6K!! I thought I would die! If I only had done 6K at that time then this was the hardest day ever! Walking on and after that last hill all of a sudden the village was near! It was already the next 6K and I stumbled into the village of Calzadilla de la Ceuza…that meant it was 18K already! I was so happy! My feet were still hurting…. AFter that long road I sat in the garden of my albergue and this hummingbird hawk moth just made my day!! 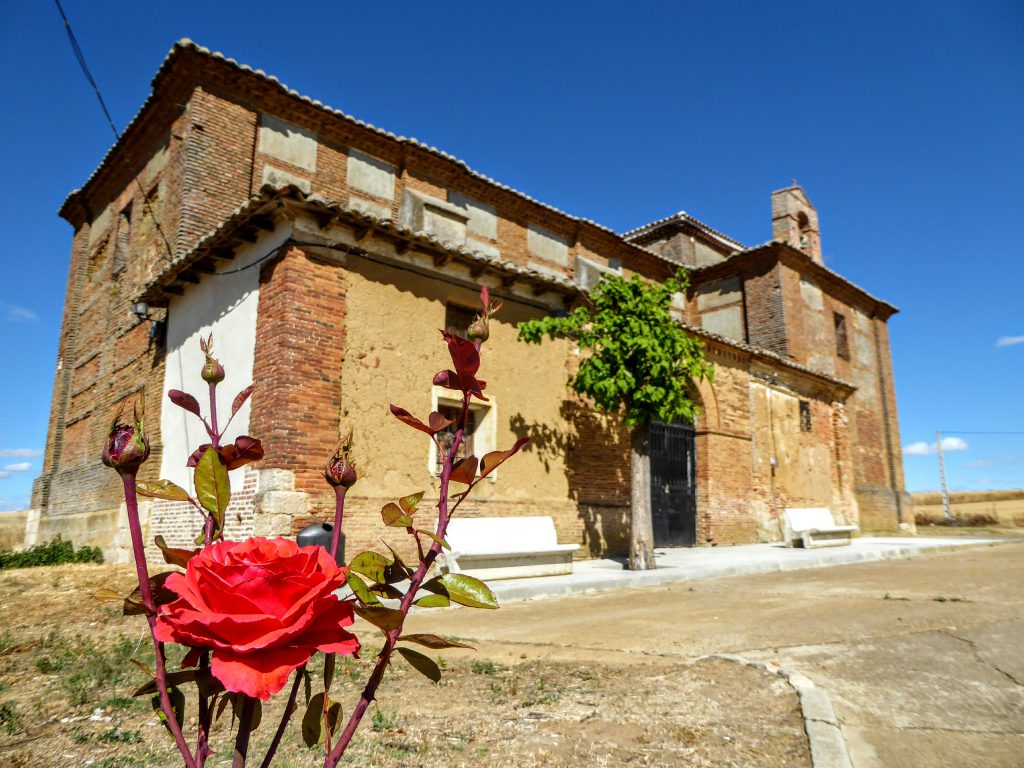 Today I started without pain!! I was so happy with that! It only lasted for an hour….but it felt great! I had coffee and breaks in every village I passed….and that was about 4-5 times 🙂 Slowly I got to Sahagun and when I finally found the albergue that was situated in a church i sat down.. Here I met Jerry and Terry again. Saw them already for 3 days… Nice guys and the next couple of days I would go and walk with them. 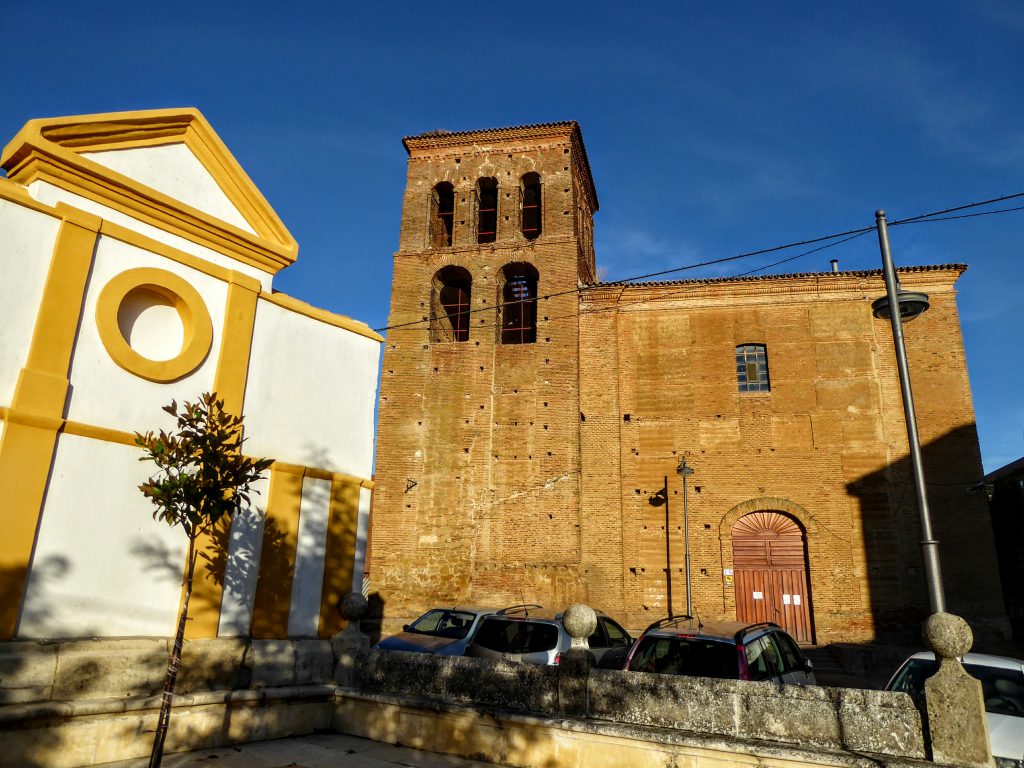 The Church on the right side was the church of the albergue! At Sahagun the Camino has still 379K to go…

That meant I had done half of the journey!! That is great!

I feel like things are going to be better from now on. My feet are almost better. The blisters are healing good and my goal has shifted. My first goal was to get to Santiago early october so I could have more then a week in Portugal. I let that go… If I have any time left there it would be nice….but I’m going to take time for this once in a lifetime Camino thing!! I will probably not do this ever again….so I have to enjoy it to the fullest!!

The experience is wonderful! Every where you come you find familiar faces…even though you have never visited the place. It feels so great! Walking around and talking to all kinds of people you have met along the way. Talking about where you’re going…how your passed days went… Have you seen him or her? etc.. It is great!!

We are all in a foreign country and still in a community that binds us, I love it!! Read all the post about this great and wonderful Camino:

Walking my First 200 K of the Camino

Walking from 400K to 600K on the Camino Frances

Or are you looking for another challenge?