When I was visiting Havana my Casa was situated in between two touristic areas. The district called La habana Vieja where you’ll find the great shoppingstreet Obispo, where you’ll find the museum of revolution and where the Plaza Vieja is situatied with a lot of terrace to enjoy some time. And on the other hand the district of Vedado. Where the wealthier Cuban lives and where Hotel Habana Libre and Hotel Nacional are icons you need to visit.

Those two touristic districts…where it is made colourful and beautiful to show the rest of the world. Where the road is been developed and been paved by the gouvernment. I made a tour around the city and saw a lot of the different parts of the city, the nice and well maintained parts and some other neglected parts. Still…all of them were colourful, some more with the great people and some more with the great houses and all of them with those great colourful American cars!!

And then I want to show you the in between parts…

In this post I don’t want to show you the part that everyone visits. I want to show you the part I walked through every day of my visit of almost a week to Havana. Show you the Great Streetpics of Havana!! To show you how the local Cuban citizin is living.  We need to show the local life, how they live in their normal life. And how far away is that normal life to our normal way of life? When you just look at it from a distance you romanticize the life, the district and maybe see certain movies and stories in your mind. We have certain luxuries we don’t even realise anymore. 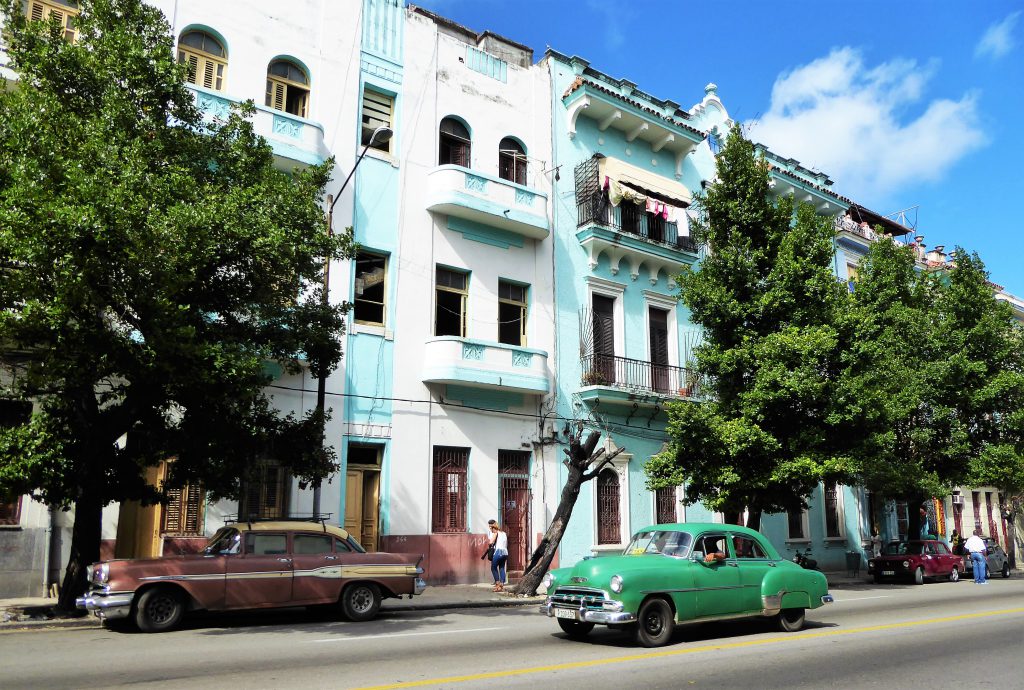 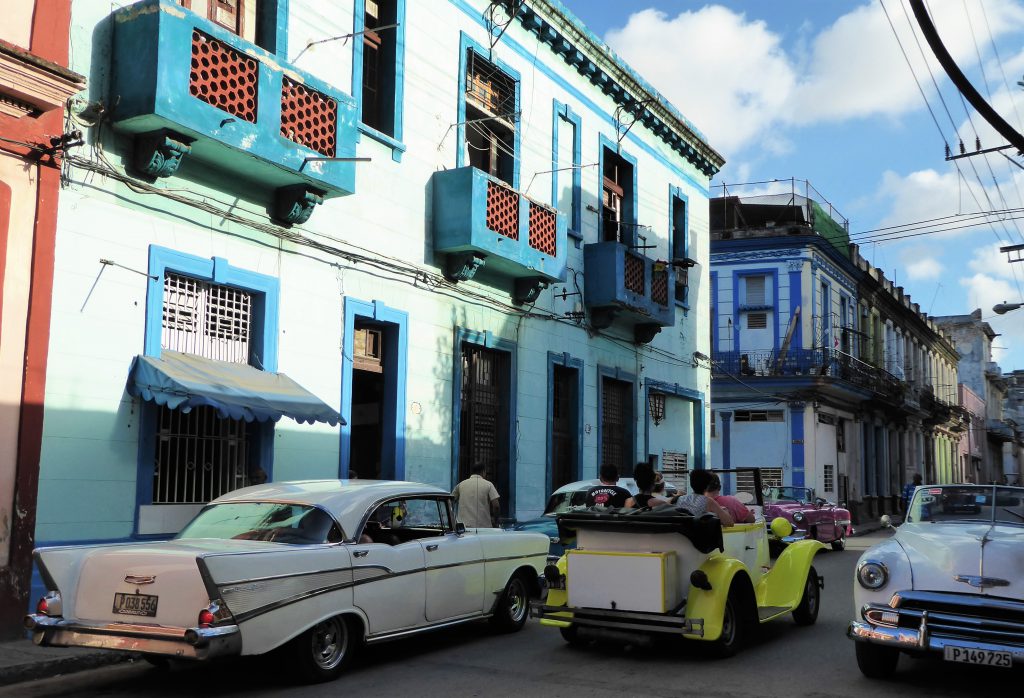 Don’t you love those great StreetPics of Havana City? 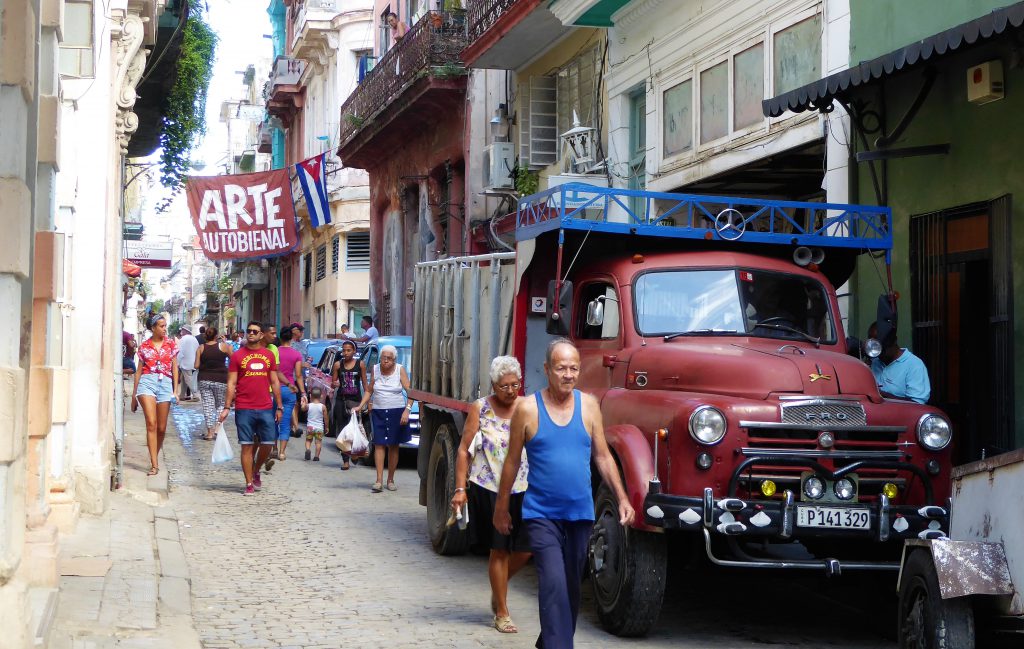 If you walk out of these touristic part you sometimes feel like walking into a warzone. All that gold and glamour is gone… the roads are really bad, big potholls or even no pavement at all. The only thing that remains the same is the great people of this community and the hustle and bustle on the streets of local Havana. The colourful people and those great old American Cars!!

Because of all that action and movement I thought of just sharing some of those great colourful pics. Just record what I see…what happens around you in just some minutes time in the streets of Havana! 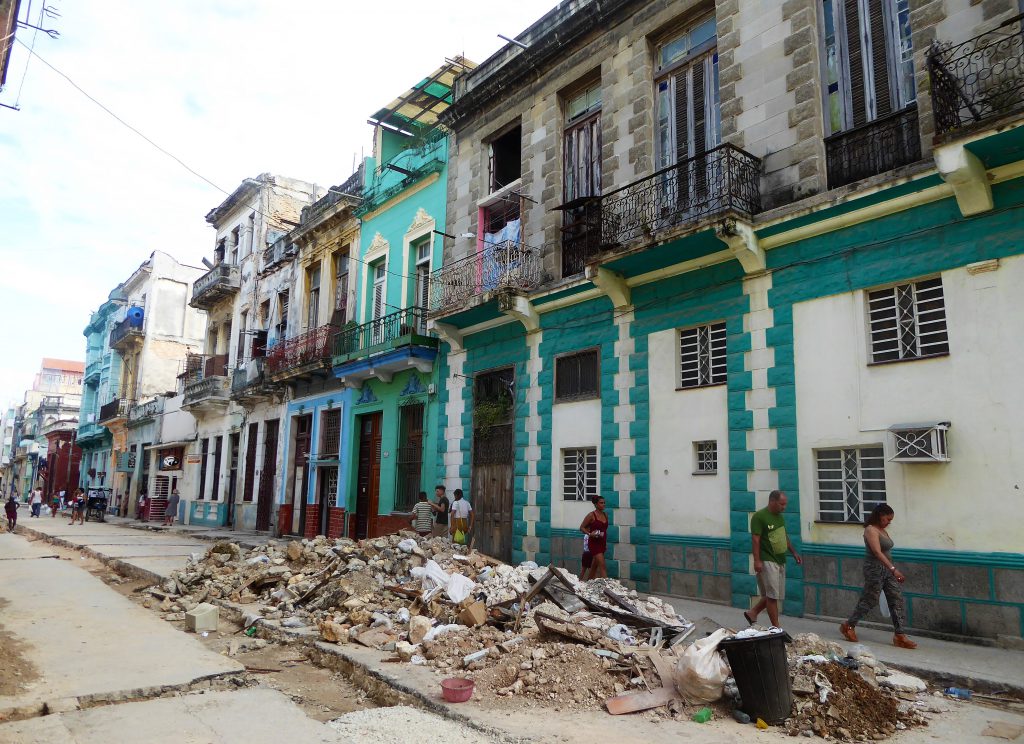 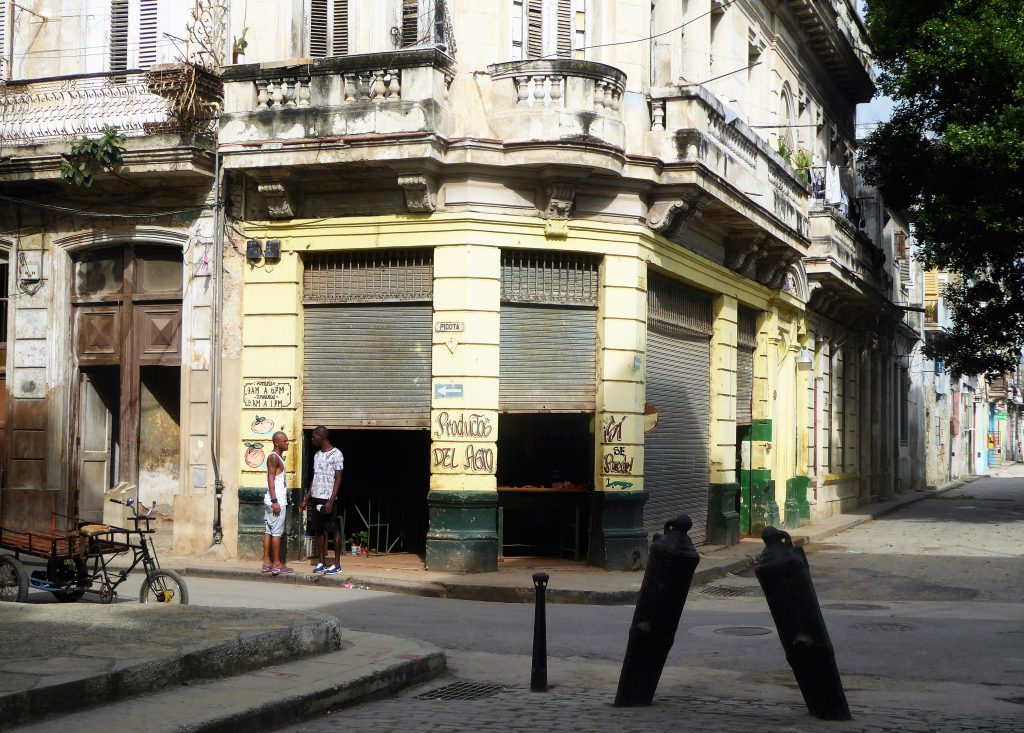 The District in between La Habana Vieja & Vedado

I always send emails back home when traveling

”
I saw this little girl walking with here family. She only had attention to the beer can she was holding in her hands. I obviously was curious and looked with her to the can..it was a strange situation for me… It was an empty beer can shw was holding carefully with her two hands. She was holding it on the side and the top was cut open as a lid. As I looked better I saw little nose sticking out of the beer can.. it was the little nose of her rat 🙂

Walking in a city as Havana you’ll get to see so many great scenes!!
A beautiful Chevrolet, pink with white colourd and an open roof is siuated on the side of the colourful street. I hear loud Cuban music and a couple of kids are dancing to it. Just some metres down the road I hear the sound of kisses. When I look I see 3 men standing there and looking at me. One of hem is asking: Como esat? I give them a thumbs up and he happily to give me a smile.

When I look in front of me I need to jump to the side to protect my foot. A guy was passing me and he was carrying a pack of steel cable and it was pulling it with him, dragging it metres behind him over the floor.

And on the side of the road some ladies are talking…gossiping probably. One is hanging over the window sill and another is leaning against the iron gate that prevents unwanted visitors to get into the house. I see some kids getting dragged along by their mothers and one started to cry because his mom was pulling hard on his arm.
And then I hear this voice, screaming along the road. I can not understand but when I look I see this man selling garlic. The garlic is hanging in a long string along side his body.
And just a bit down the road I see some men standing around a matrass. This matrass is put on a high table  and I wander what they are doing? One is shining a light with a mobile so another can put a needle and thread in it. Are they fixing it? Are they preparing it for someting?
I see another man coming out of a house…crossing the street and as quick as he appeared he dissapppears in a house on the opposite side…
”

( This scene was seen in the street Virtudes) In case you got curious 🙂 My casa was in the street Animas and that is just one street down to Malecon, the boulevard along the coast. The hustle and bustle is similar to eachother. Great streets and a lot to see!!

I loved walking there!! 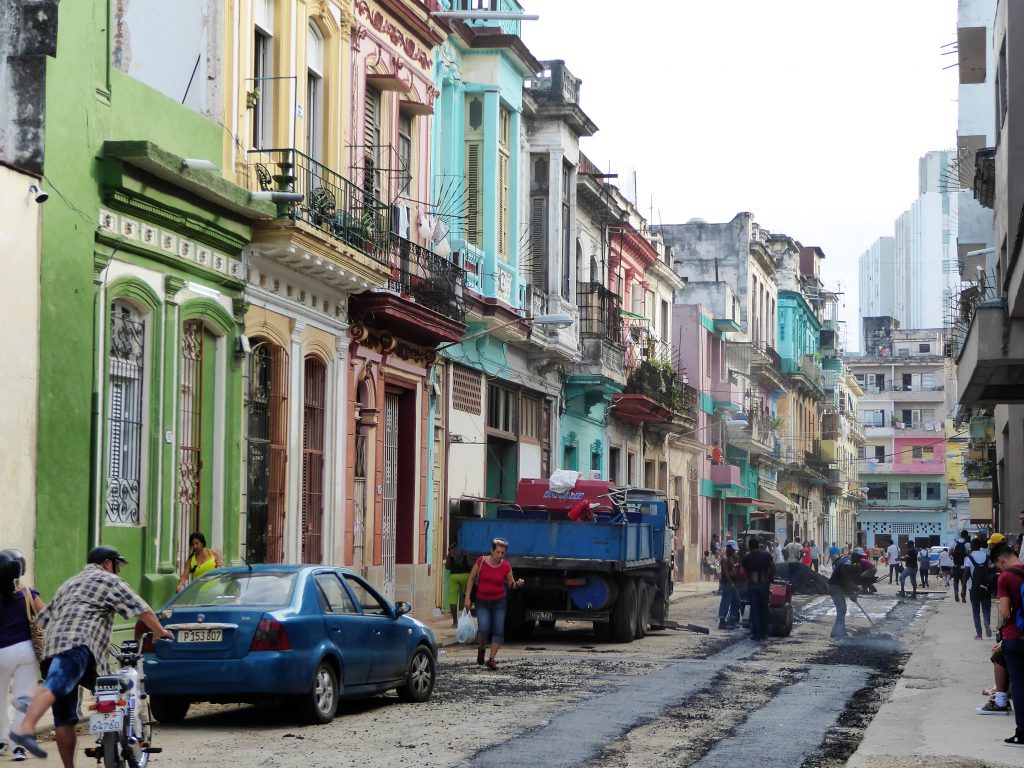 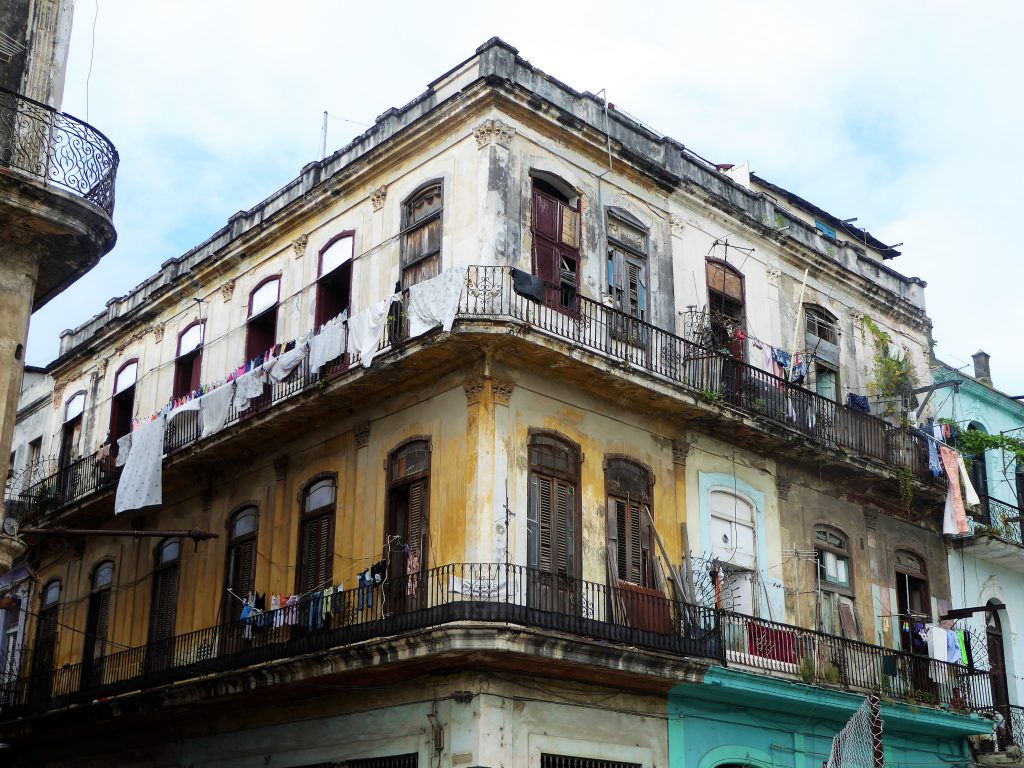 In Between La Habana Vieja & Vedado

All those sounds.. all the images.. All the great people!! 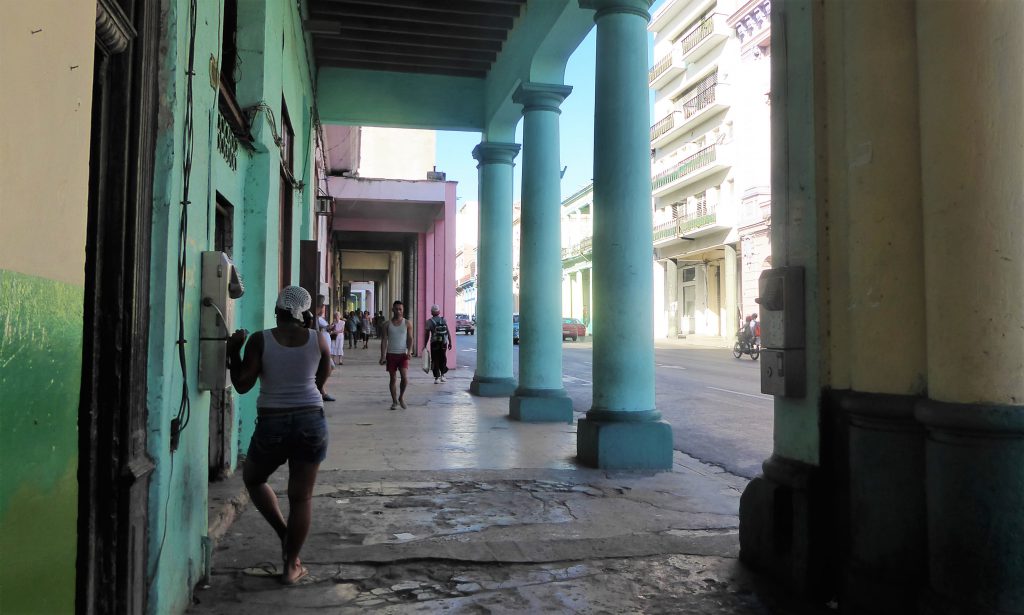 The streets aren’t paved correctly…or maybe once they were but now you really have to constantly look down to see where you put your foot. I was so busy just walking those streets.. As a spoiled tourist you need to whine about something don’t you?? And how blessed am I that I can whine about this?? 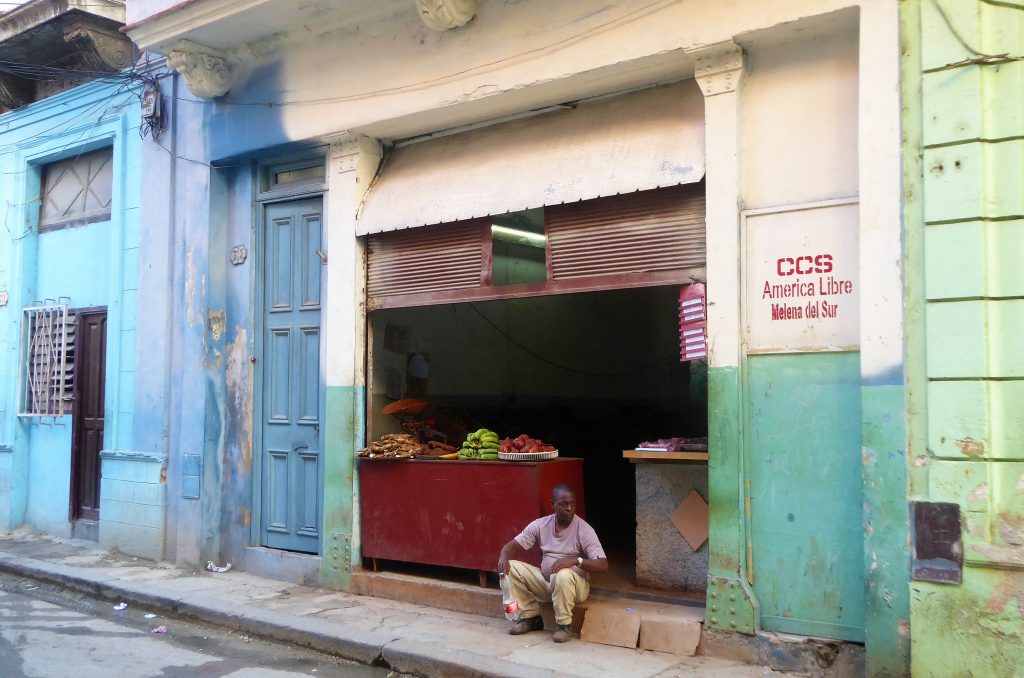 In Cuba they havent got a lot of supermarkets yet. The big concerns hasn’t got a place in their streets yet. The way they buy and sell their food is the way it used to be here too. Everybody sells what they have or what they are good at. Every day again you have to go along the houses and show what you have to sell and if your product is really good people will come to your house. Because of this the streetlife is so busy and alive.

No Supermarkets yet in Cuba

I met the English Dave while in Varadero and he told me that he was in a supermarket and found water, soft drinks and he was happy to have found a chocolate bar, a MARS. And when I was in Trinidad I saw this little touristic shop where I could buy some cookies and sweets. This was the largest sthop I found that came near to a supermarket. Oh yes….I did find a M&M’s somewhere…it was in a museum shop. And I bought it too!! Sometimes a girl needs her chocolate 🙂 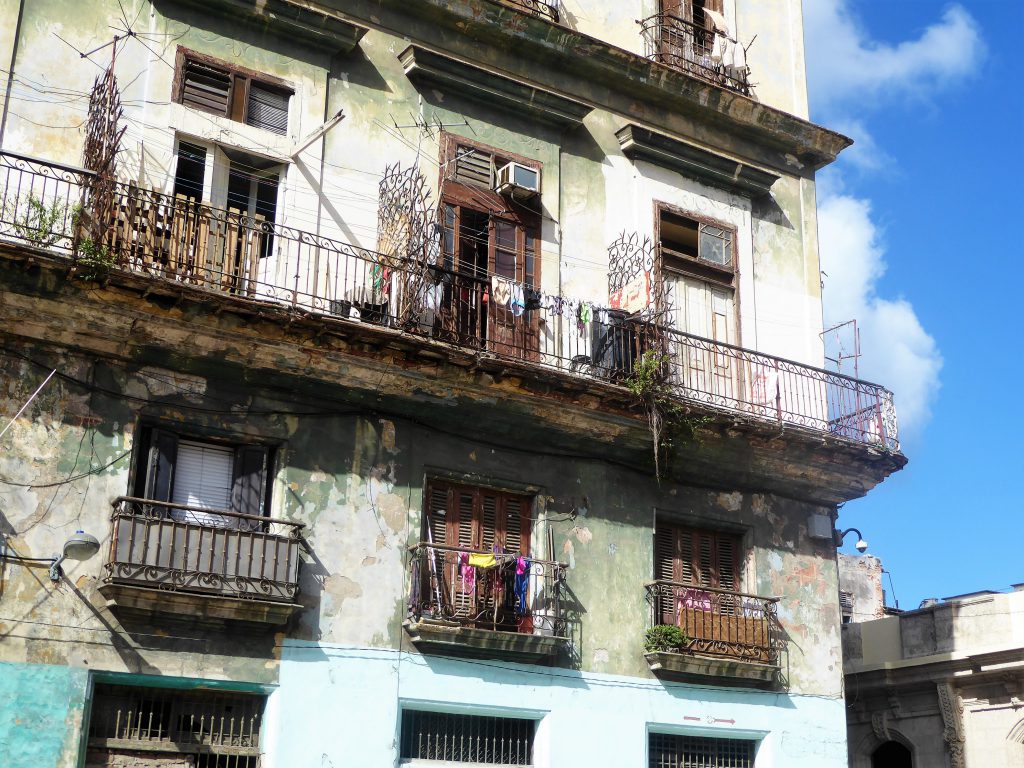 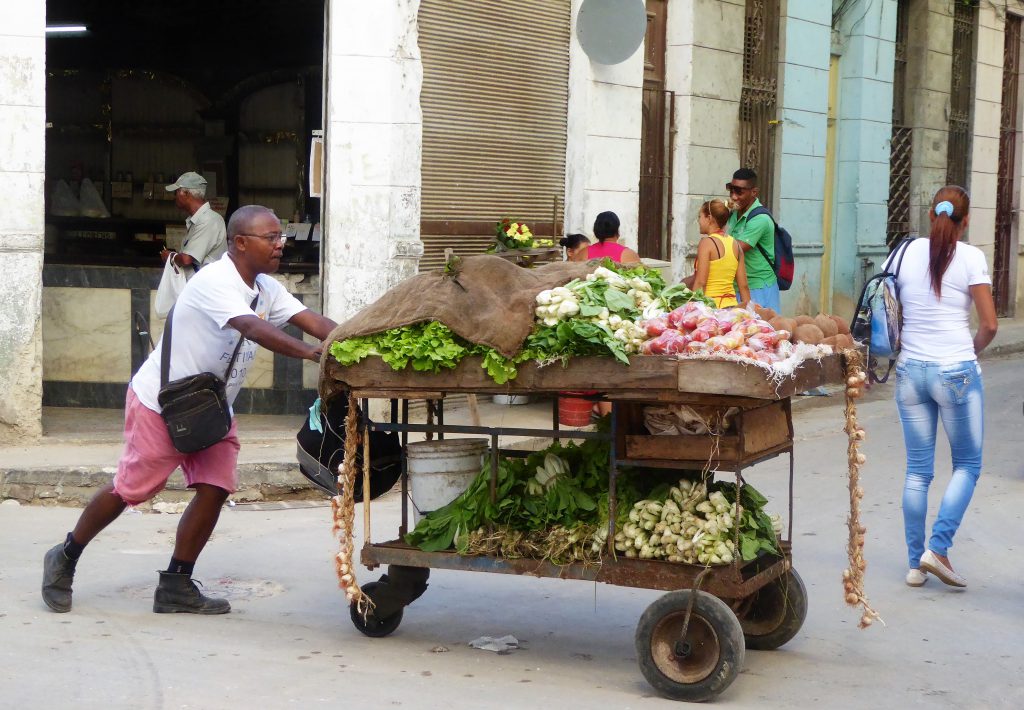 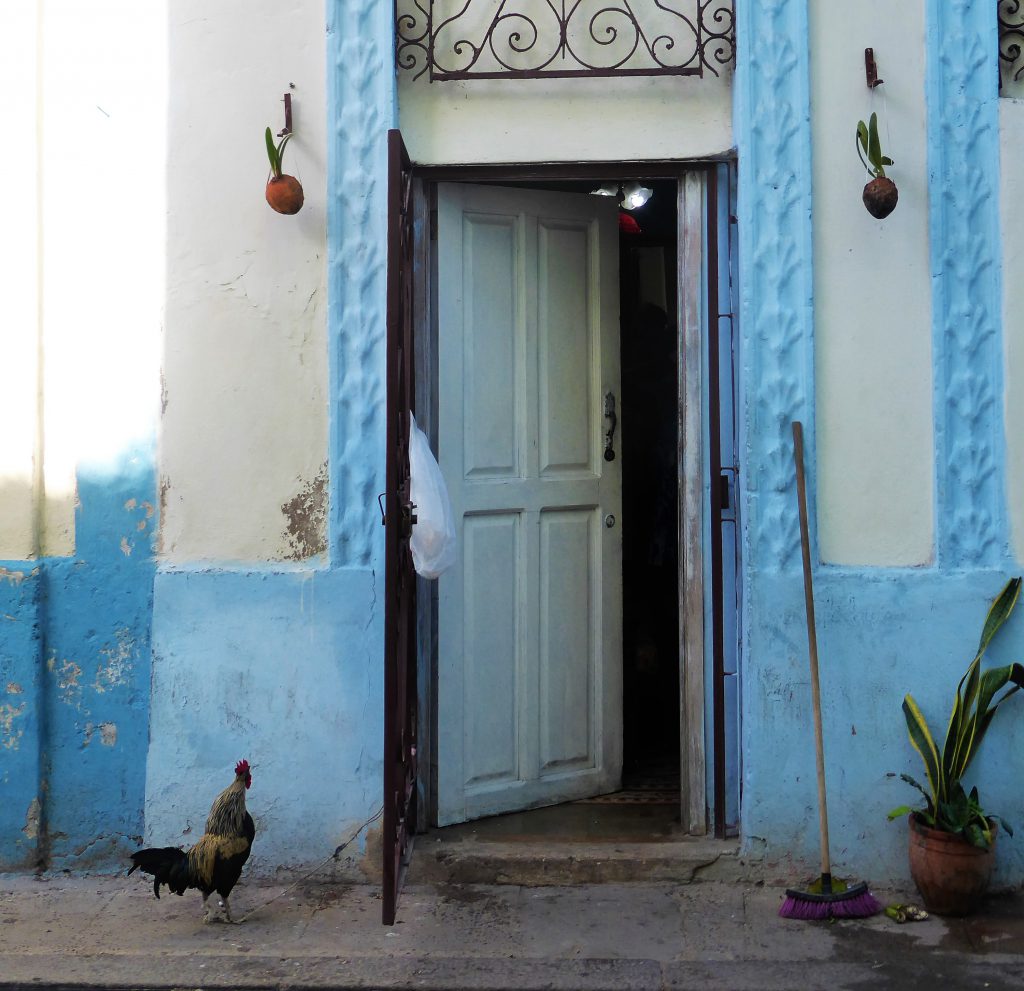 Don’t you love this front door with rooster?

A rooster, the pride of a family, tied up to this front door. I saw a lot of men walking with their rooster on his arm. They take them everywhere. You see a lot of chicken too… I do think they are exchanged for dinner a lot 🙂 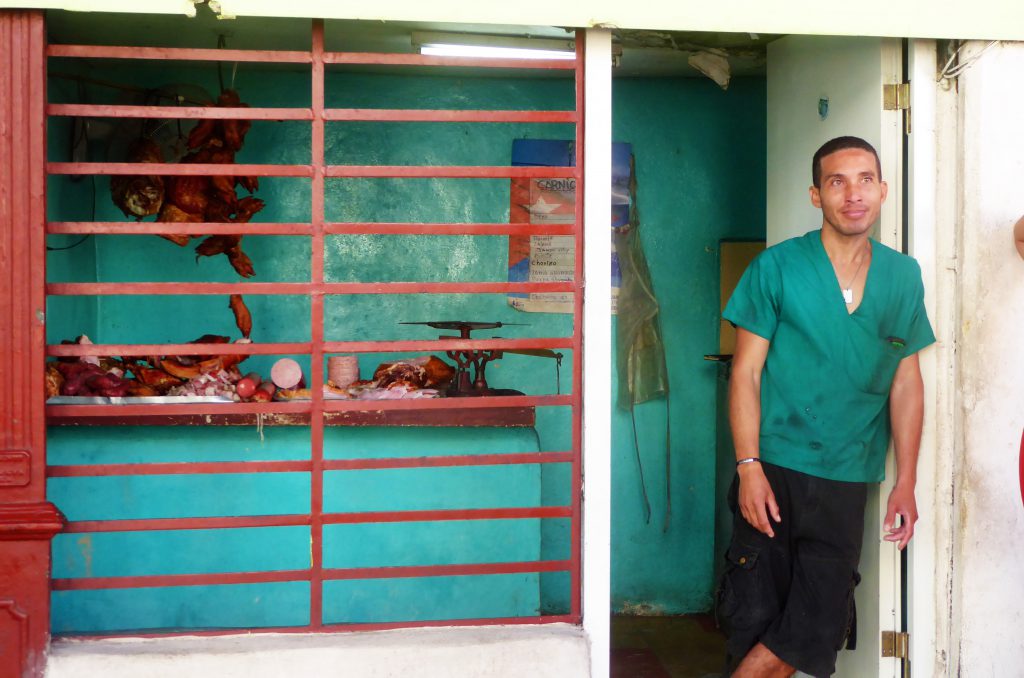 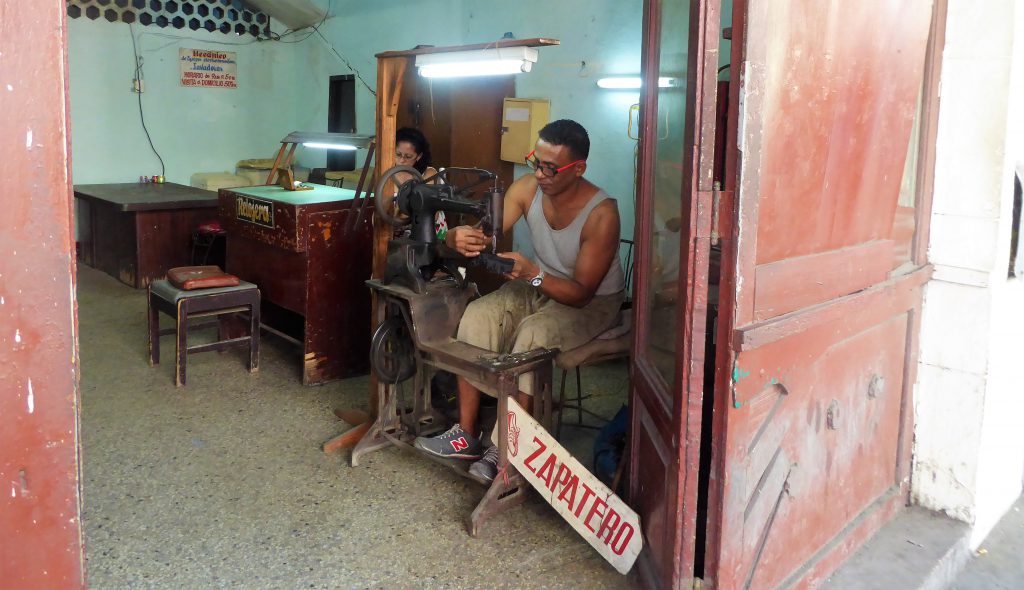 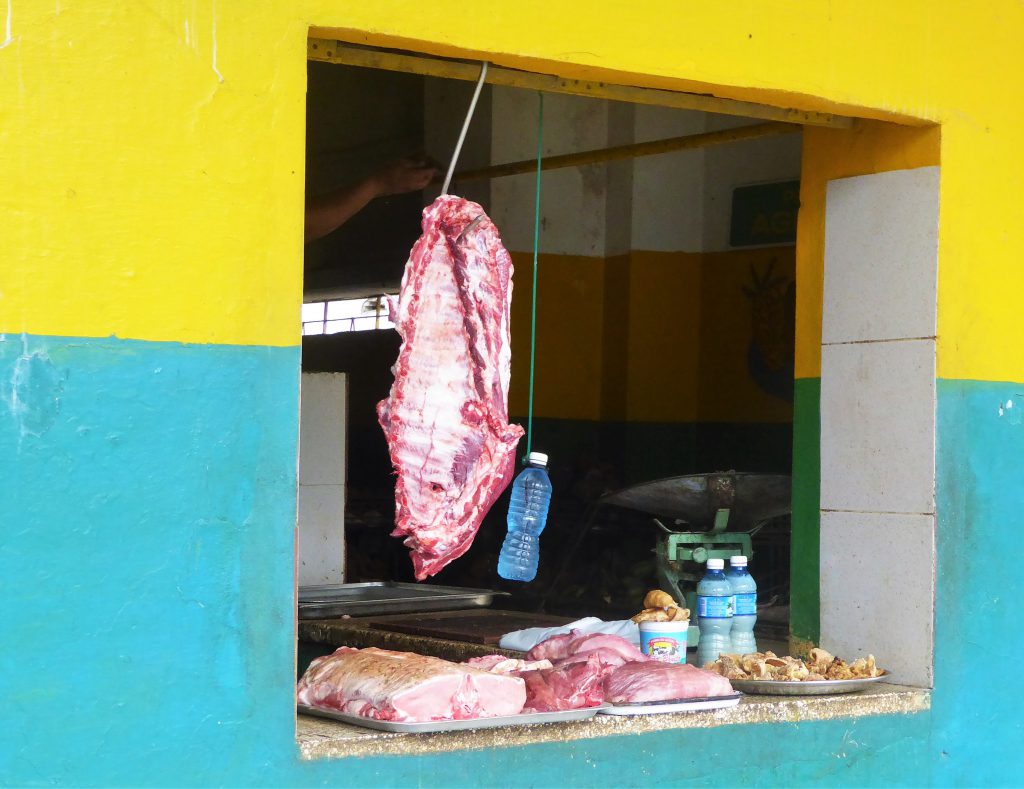 And then I was standing on the streetcorner, just to soak in everything around me. I don’t make a lot of clips but I thought it right there and I started to record all the sounds and all the people that were walking there. Just to give you the sight and the sounds!!

In between the Districts La Habana Vieja & Vedado

If you liked this post you would make me happy by sharing it!! 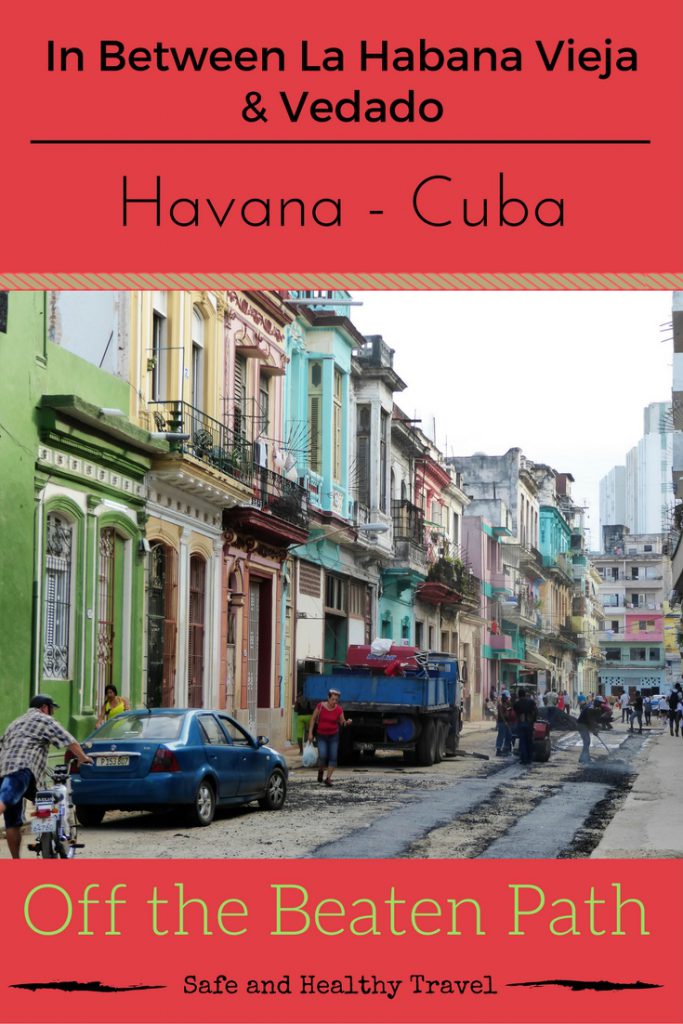 Do you want to read more about my travel in Cuba?

Highlights of my 3 weeks in Cuba

Cycling to the beach of Playa Ancon – Trinidad

Read also why you should book a Casa instead of a Hotel!!

Or would you like to do some more Yoga?

Check my Blog to Inspire you!!

I hope you Love your Life and make your World Great!!