When I was in Malaysia, on the island of Tioman, I also visited the Rafflesia in the jungle, the biggest flower in the world! I was actually too late and so I was very happy when I got the chance to see the Rafflesia again later on that same trip in Indonesia! This time I was lucky that the flower was opened just that day.

The Rafflesia is the biggest flower in the world! This flower has no leaves, no stem or roots. They told me it’s a parasite and lives on the lianas in the jungle. The diameter of this flower can even reach up to 100 cm and then the weight can just be as much as 10 kg! Even the smallest species has a diameter of 12 cm. 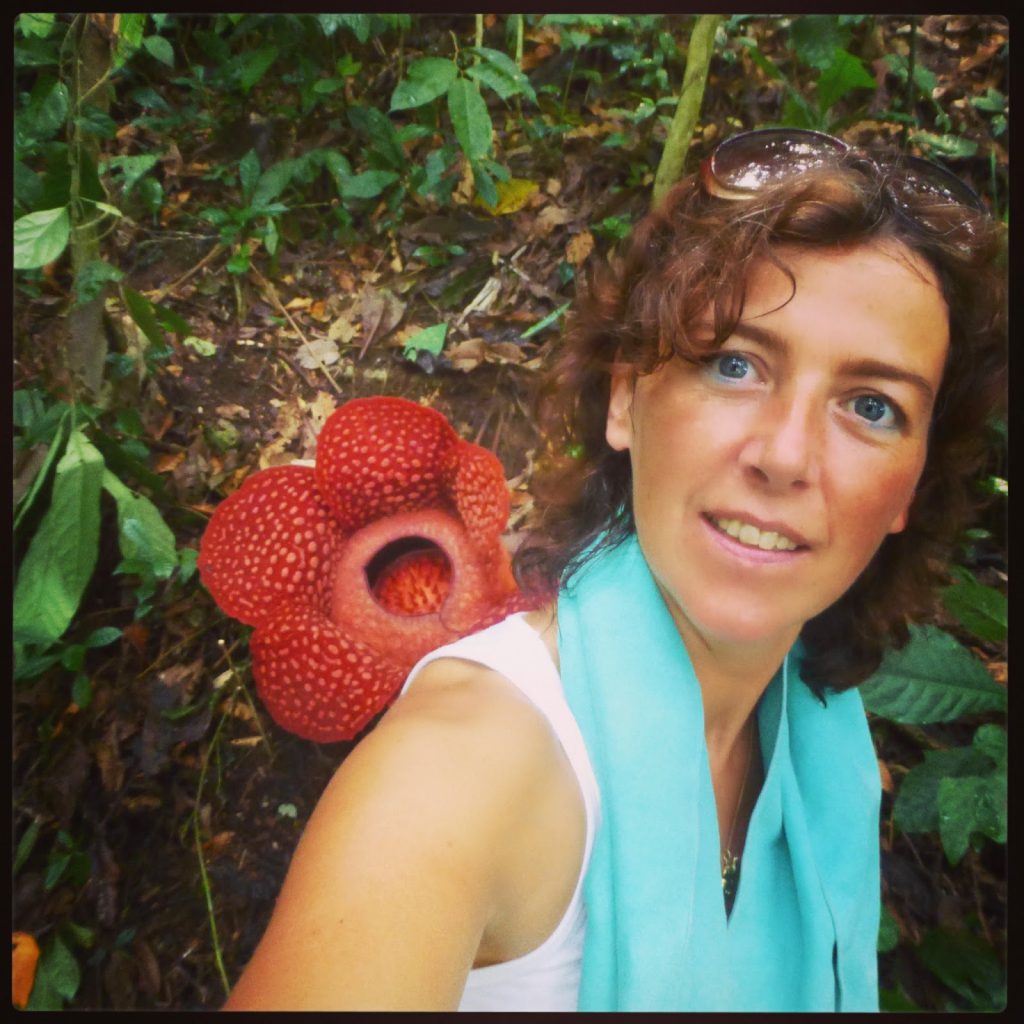 The first time I saw the biggest flower in the world, in Malaysia, it was already 10 days old and turning black. I was very happy to see it. I was still very impressed by its size. The flower was sitting on a liana about 2 meters high. It was really a special sight. I also saw other buds on the liana which are new buds, they seemed to be almost 1 with the liana. The guide showed it to me, otherwise I never would have seen it.

I ofcourse took a picture with the allready decaying Rafflesia. 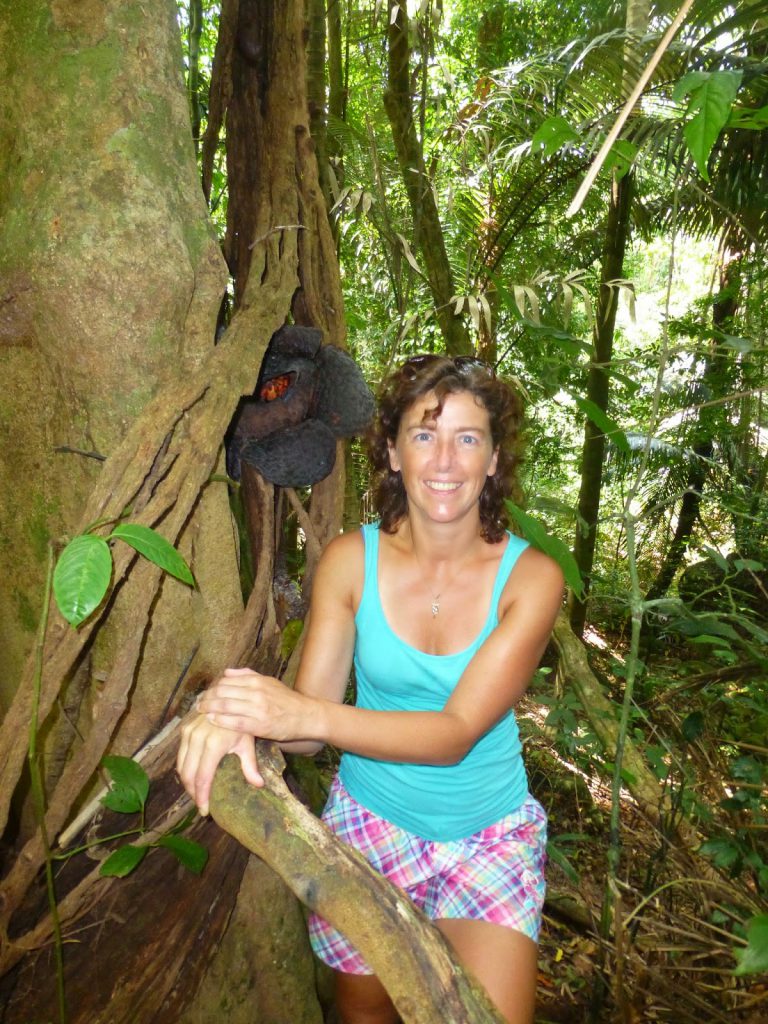 So when I was in Indonesia and my guide An from Minang Tour told me that at night a Rafflesia flower had just opened, I was of course immediately excited to go and see it. We decided to start our day with a visit to this biggest flower in the world! We went to the jungle and I started walking with a local guide. I really liked the surroundings!

The biggest flower in the world

We first walked through the rice fields. Then we really went into the jungle and started walking on a small path along a mountain. It was still early and I heard a monkey calling in the high treetops. The guide told me it was the black Gibbon. They sounded really close at one point, but I never saw one.

I did make a film of it, so you can hear the scream of the Gibbon.

Do you also hear the black gibbon? #SEasia14 #travel #Indonesia

When we came into the dense jungle, my guide started making sounds. At one point I heard someone making the same kind of sounds. After a minute I saw that there were also some foresters waiting to come along to the biggest flower in the world. We started to walk further into the jungle. It was a real climb up. At one point there was a local guide, an older man, to guide us the last part. It was all very mysterious and also very official.

They told me that the flower was a monument and therefore treated with respect.
It is a protected flower 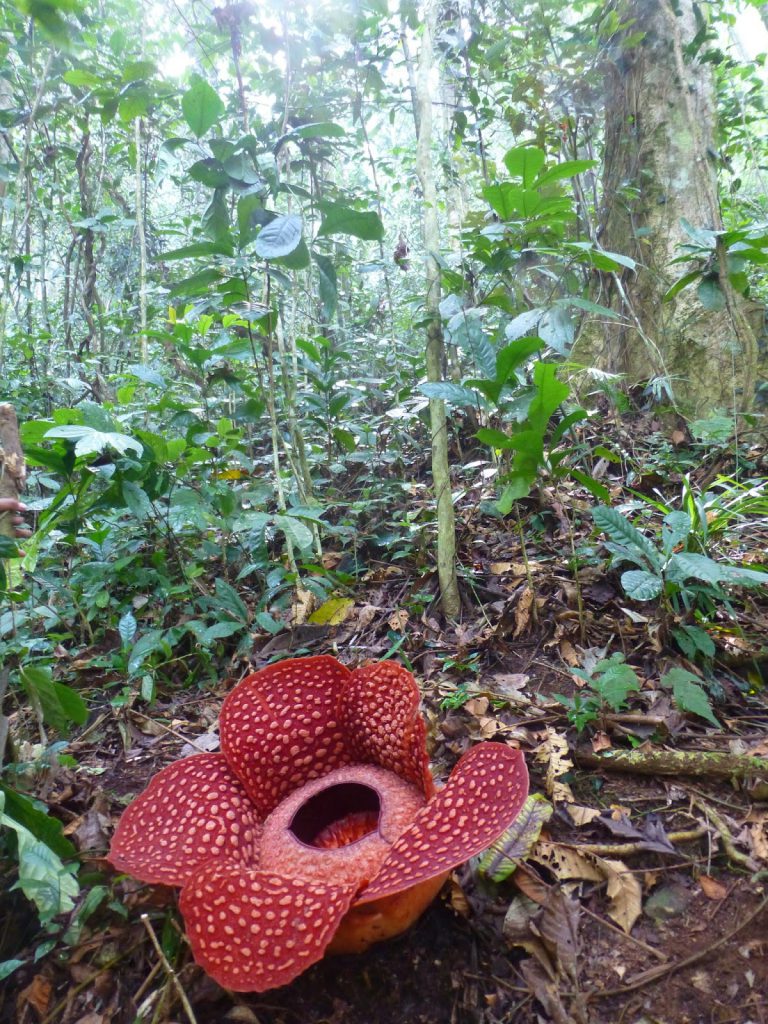 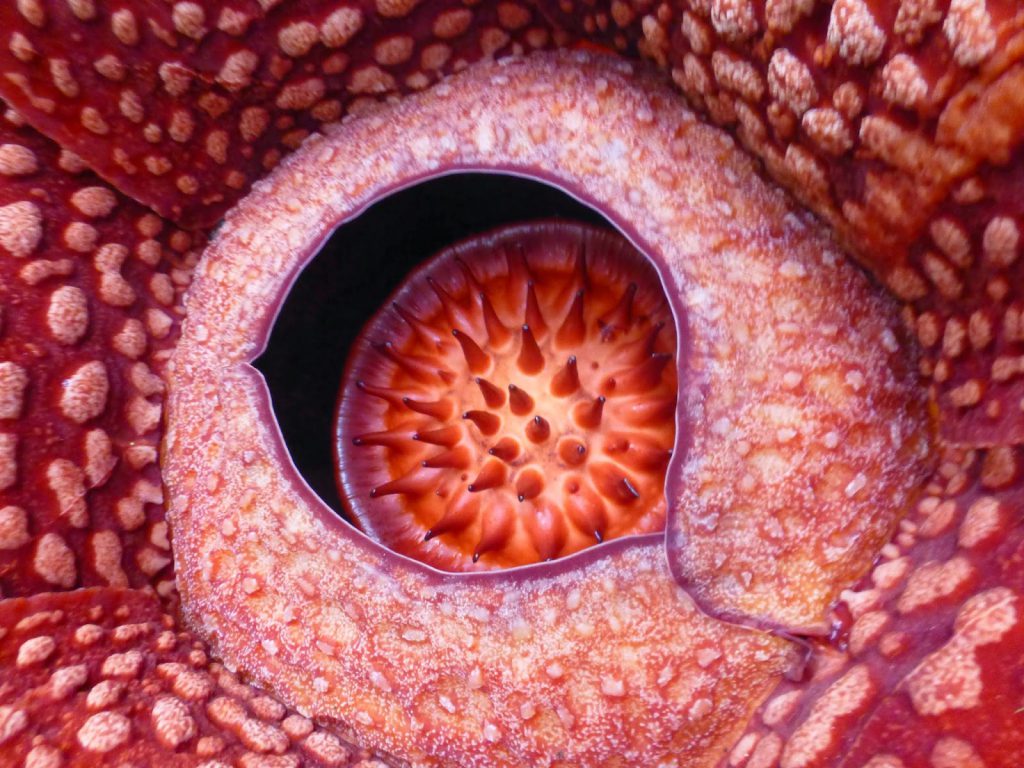 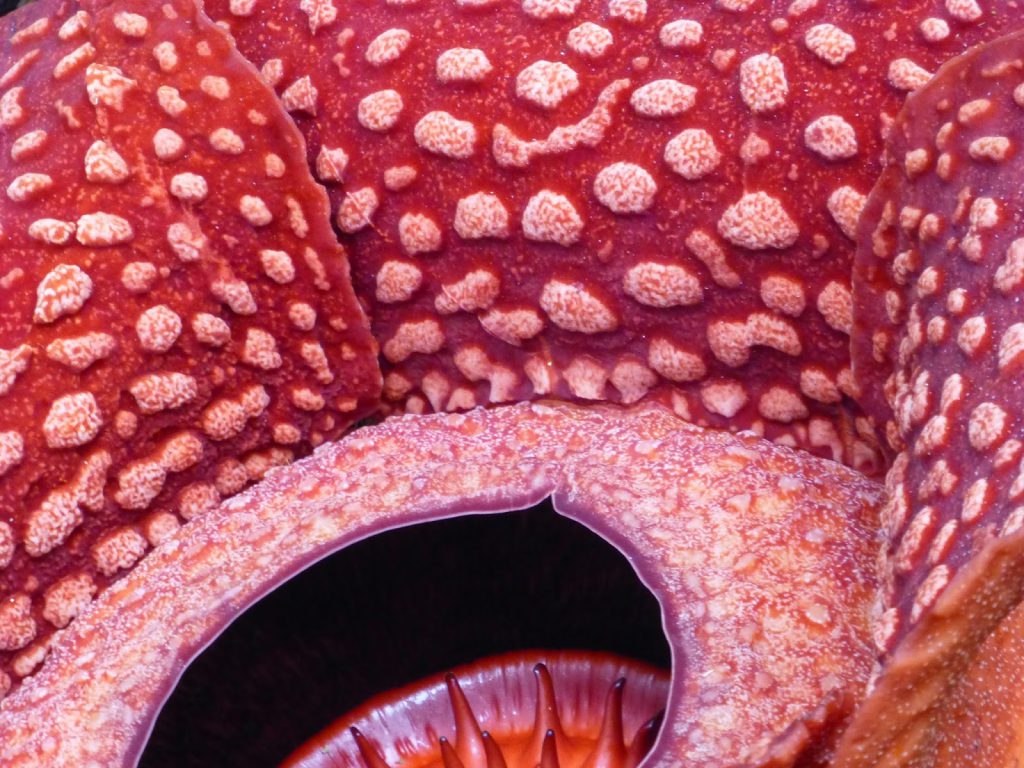 And there it was, the biggest flower in the world: The Rafflesia! Suddenly I was standing in front of that big flower lying on the ground. It stood high and had a big opening. It has a full red color with white, kind of dots. The flower had a big opening and inside I see big pistils sticking out. They were in a kind of the same color. Of course I start taking pictures and when I looked up I saw that I wasn’t the only one. The rangers were also taking pictures. We were all posing for a photo with the biggest flower in the world: The Rafflesia.

What a strange but beautiful flower!!! 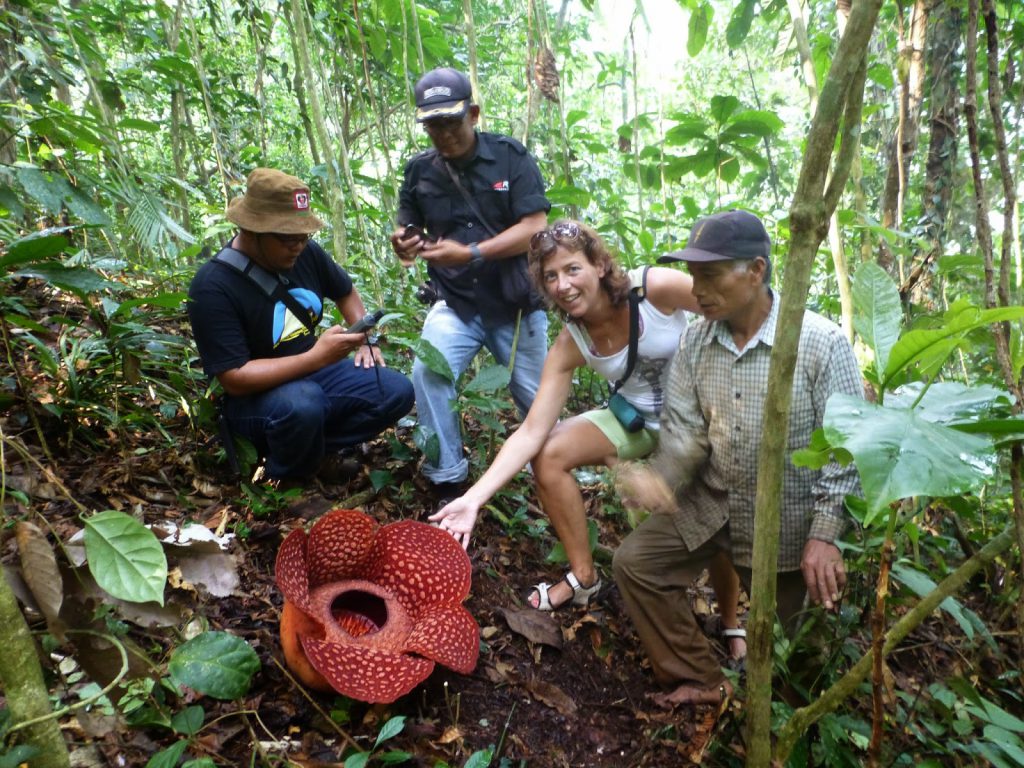 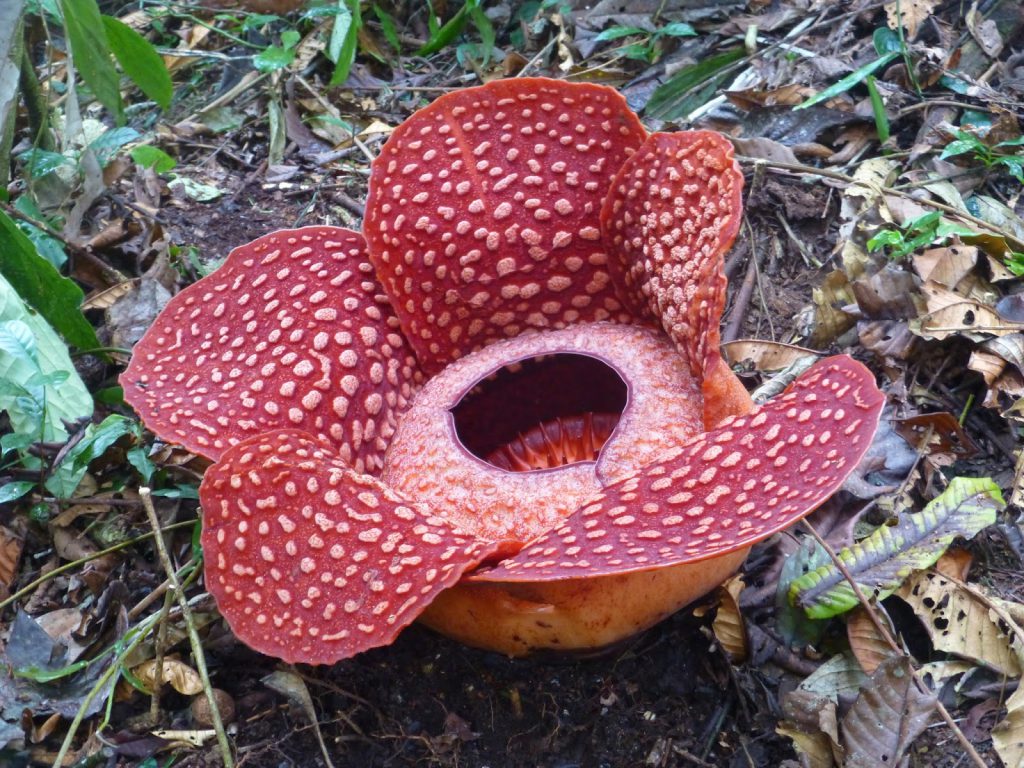 Rafflesia Biggest Flower in the World

After reading this curious about more Indonesia travels?

What about a cooking class on Samosir Island?

Touring the Harau Valley on the back of a motor? – Sumatra

Seeing the Orangutan in the rainforest, Bukit Lawang – Sumatra 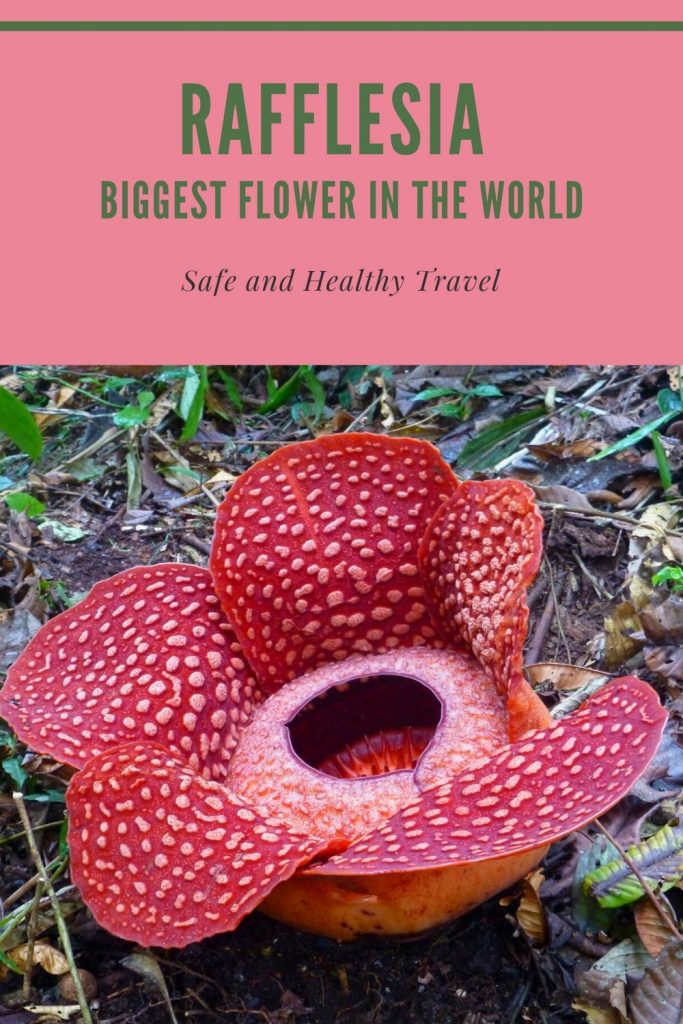