‘ I looked to the left when I was next to the holy elephant, I saw the leg of the elephant! It was just as high as I was!! ‘ 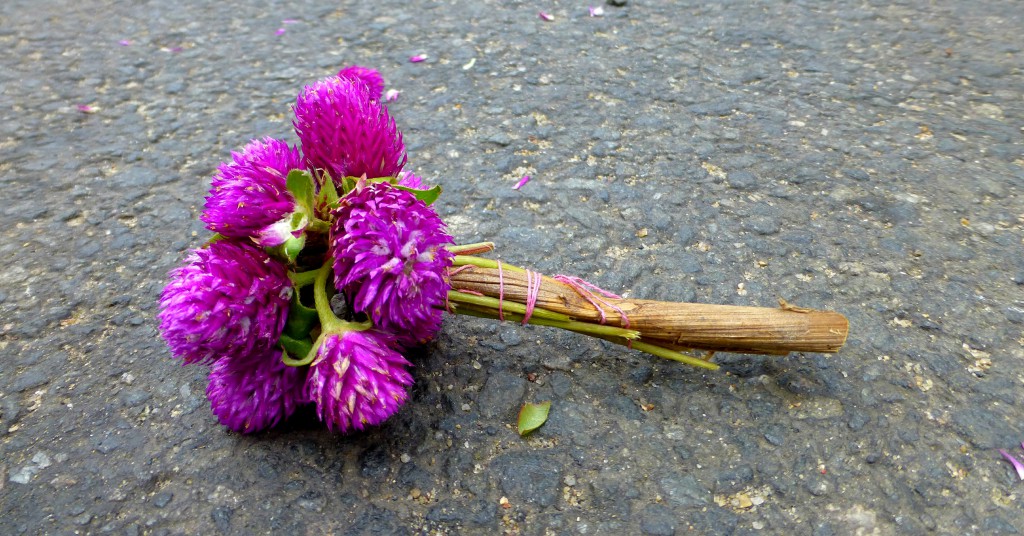 So many flowers/offers on the street

In Cochin there is a festival once a year for a week to honour the gods and pray for a good harvest. I happen to be there two days in this festival week. I was in a hotel just one street next to the Sree Poornathrayeesa temple where the festivity took place. What a great experience! 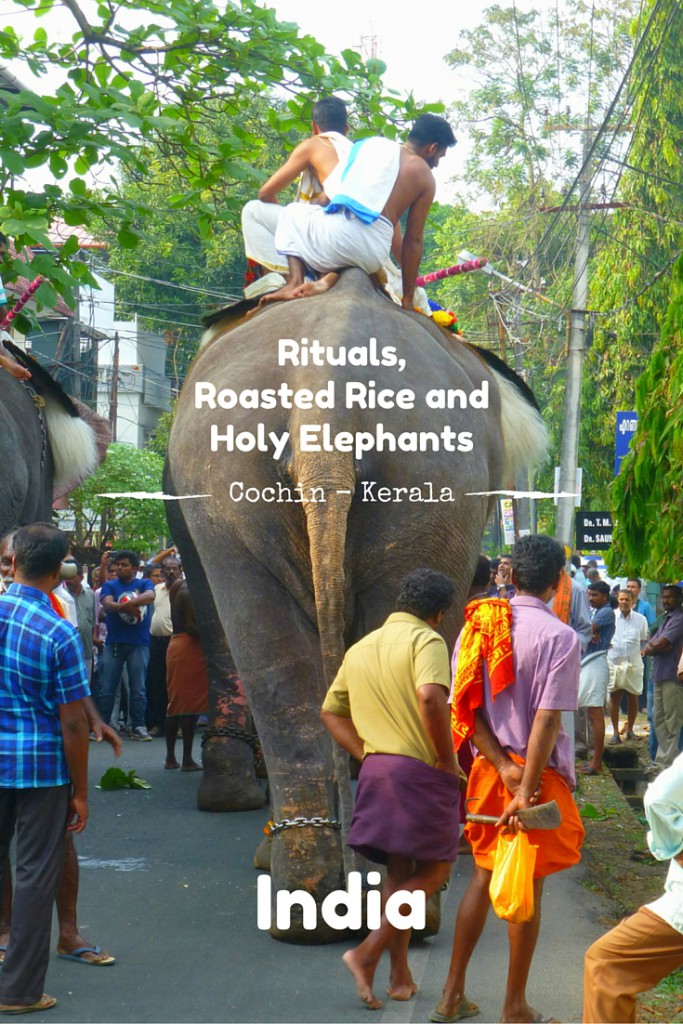 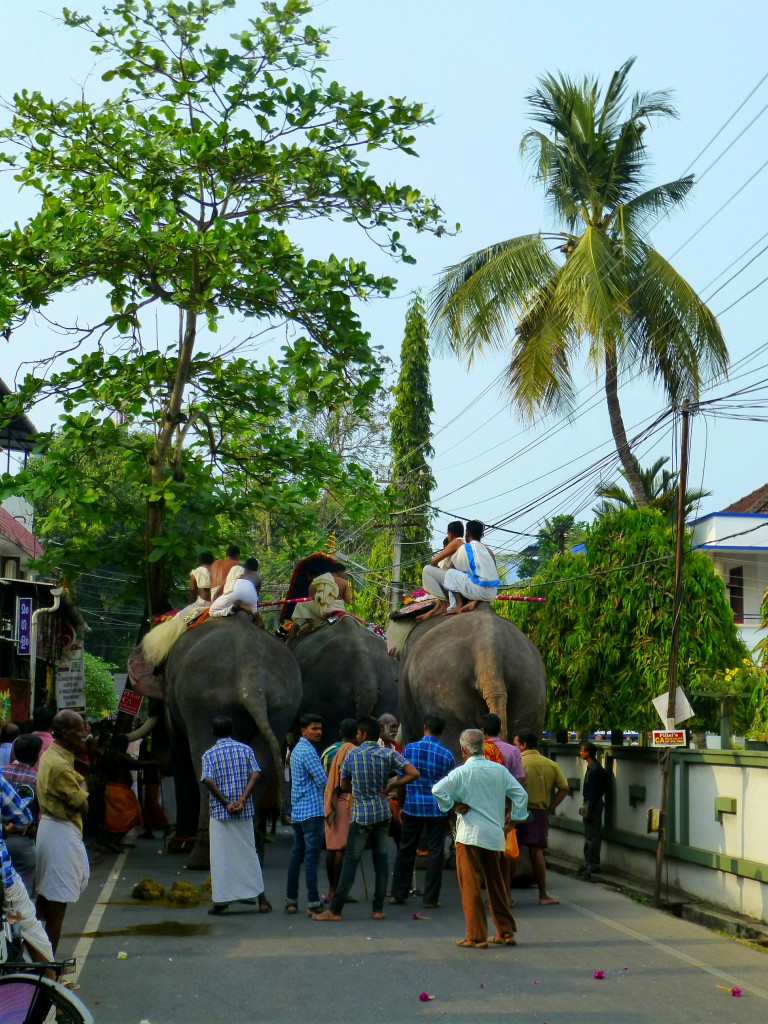 When I came back the second day from a tour to the highlights of Cochin the whole street was filled with people. When I looked again I saw three huge elephants standing in the middle of the road. They were decorated with flowers and colourful fabrics hanging over their face and its proboscis. It looked wonderful! There were so many people standing in the street and I saw two men sitting on top of the elephants too. I heard loud music, a couple of men were standing in front of the elephants making that music. What an atmosphere!!

Three huge holy Elephants in the middle of the street 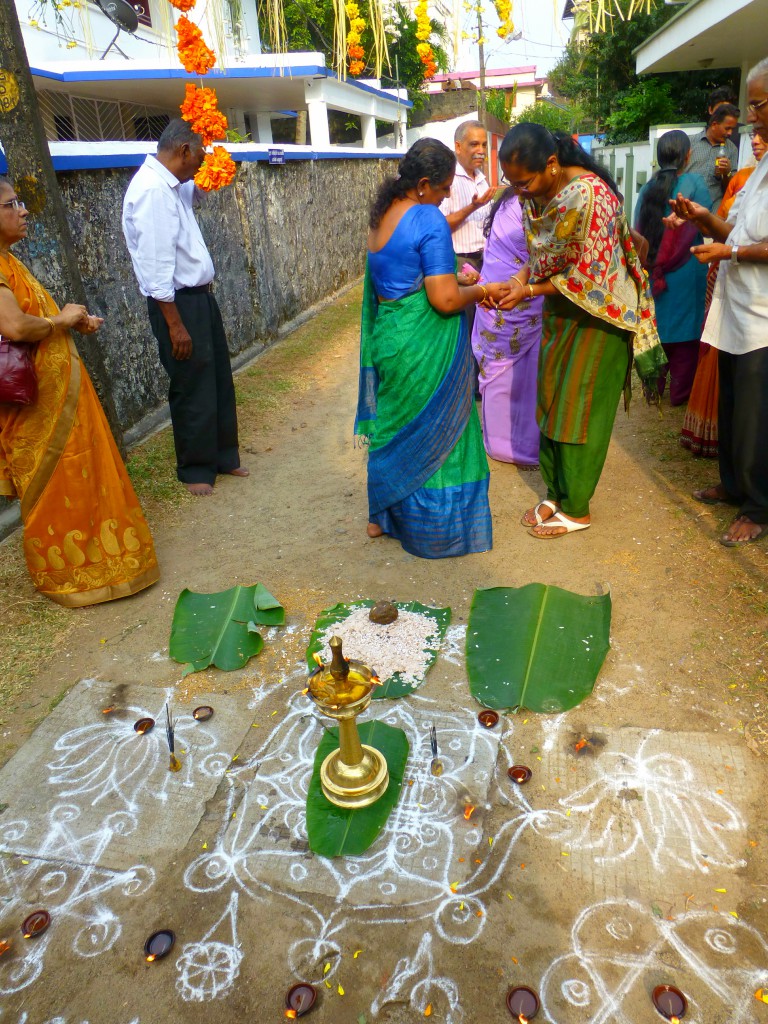 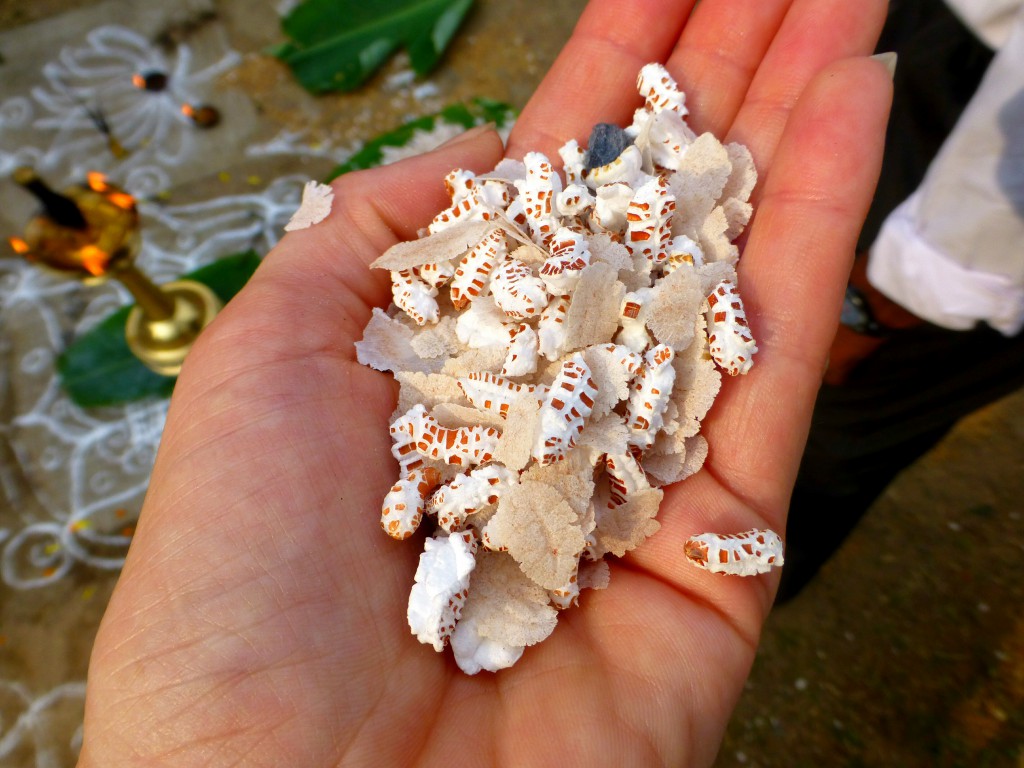 I obviously wanted to know what was going on and joined the crowd. Soon Indian people came to me and started to show me what was going on. They pointed out to me that they had offered food, flowers and insence to the Gods. I understood then that the holy man along with the three holy elephants and the music was blessing it. I saw that the family started to eat the offers after the Ritual. They offered me some too. I saw that it was roasted rice and when I ate it, it tasted a bit mouldy but I do think I got a bit of the holiness from that in me 🙂 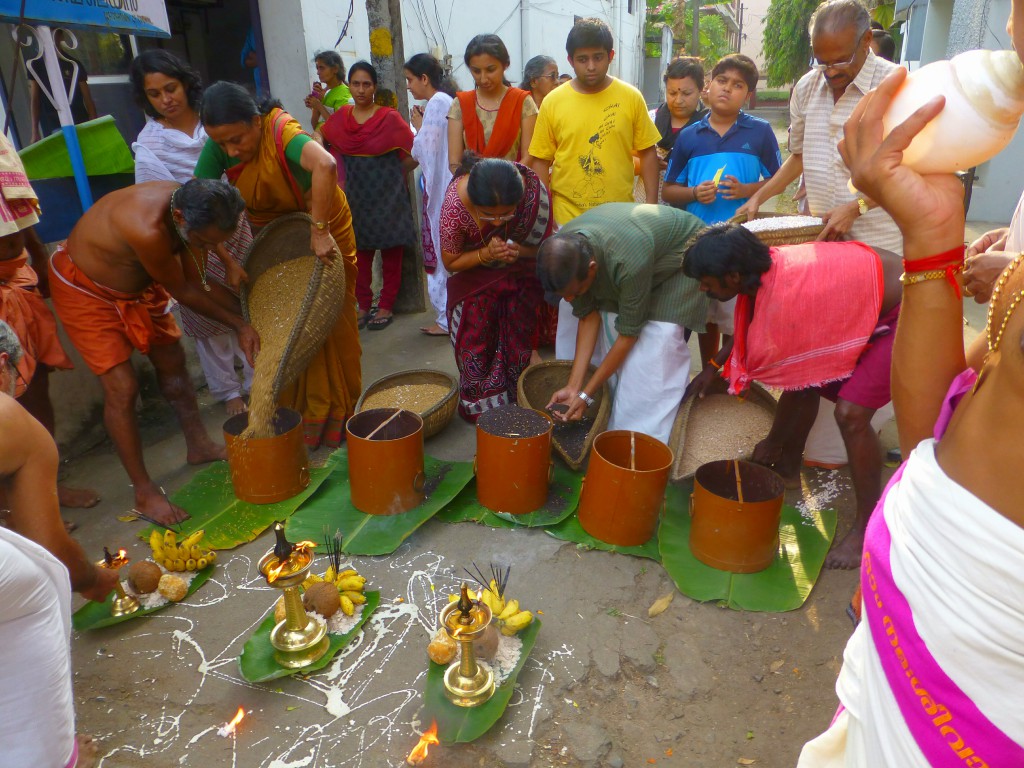 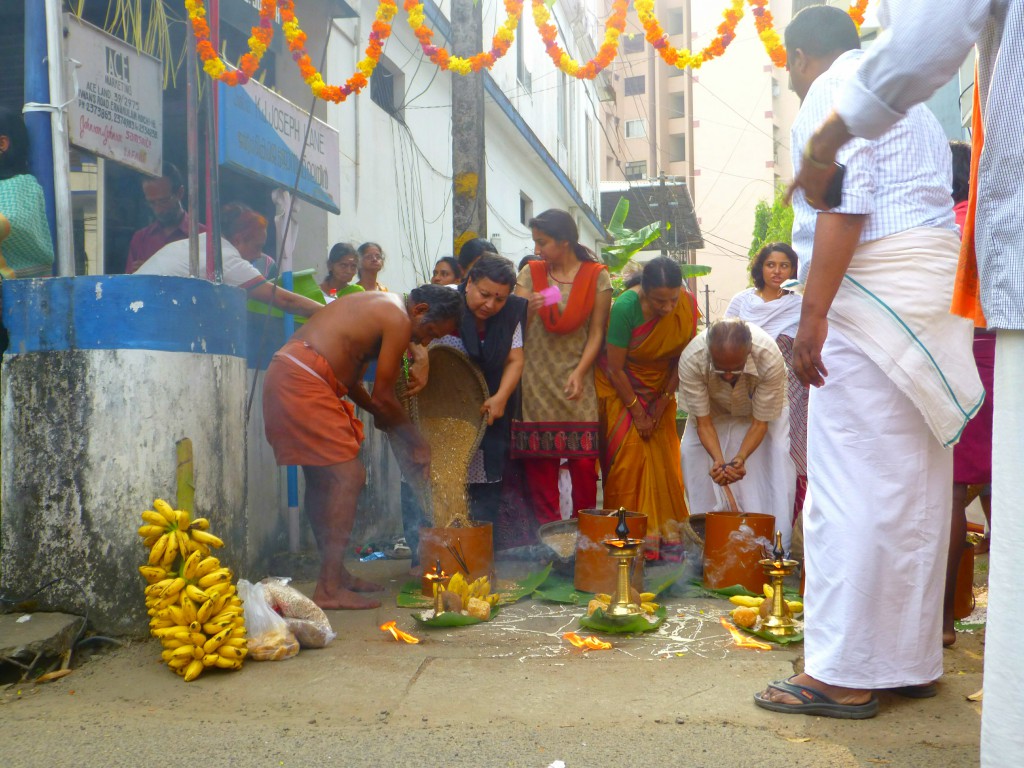 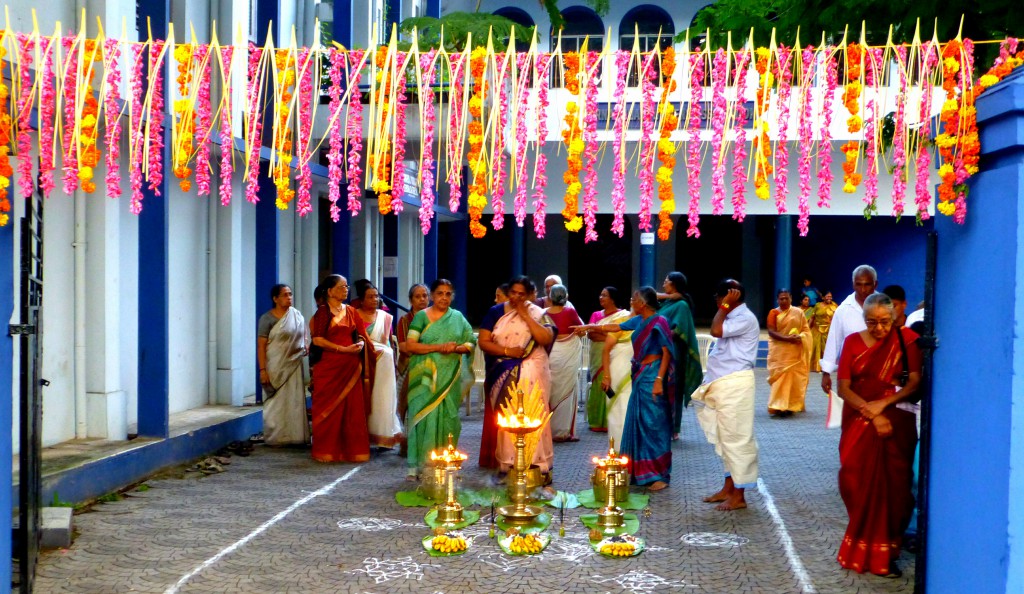 I must have been standing there for at least an hour, watching everything. Being amazed of everything. It is such a different world then what we are used too. When I finally went back to my hotel they had moved about 25 metres. They had to go at least a couple of hundred metres before they would enter the street where the temple was located.

I had a date that night with Sunil who I had met the day before and I wanted to freshen up a bit. We would go and watch the fireworks before going to the temple where another ritual would take place. After an hour I went back in to the street and was so surprised to see the holy elephants still in the street. They were a bit further away but still not near the temple. 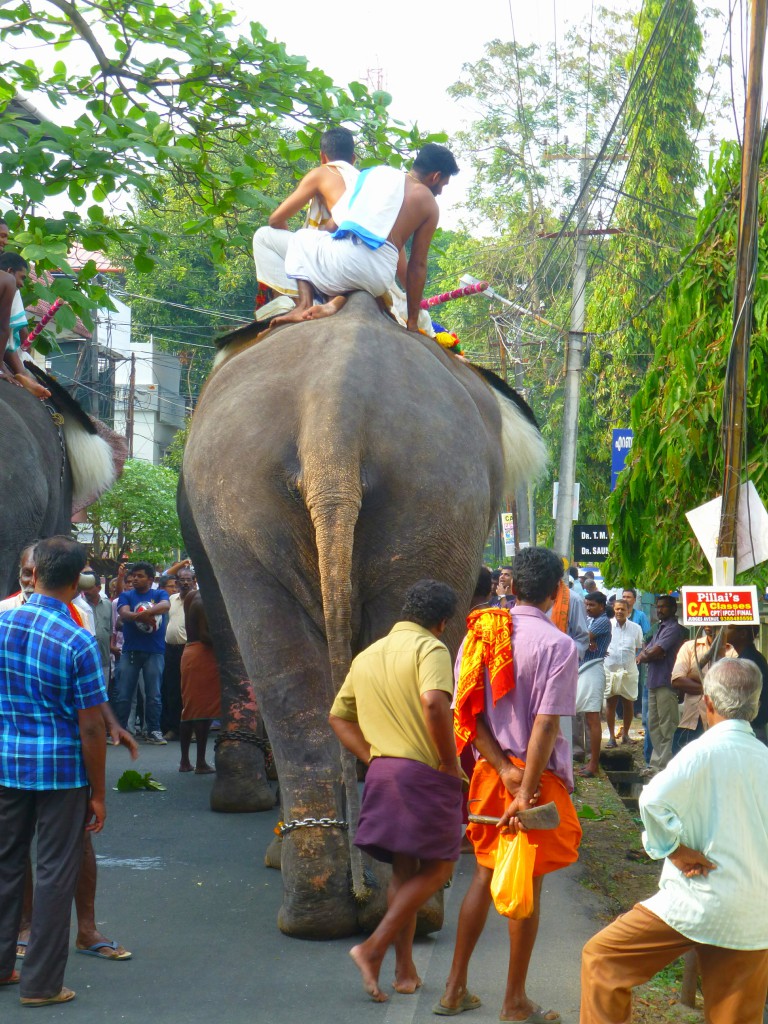 Again I stood there for a while. What a great ritual. They told me that the holy elephants were Gods at that moment. At the moment the holy elephants head is decorated it is the God that’s been honoured. For now it was Shiva, if I got that good. It was for furtility and a good harvest. The spring just started and they want to make sure everything goes right. The middle elephant was most decorated so that would be Shiva, in this case. 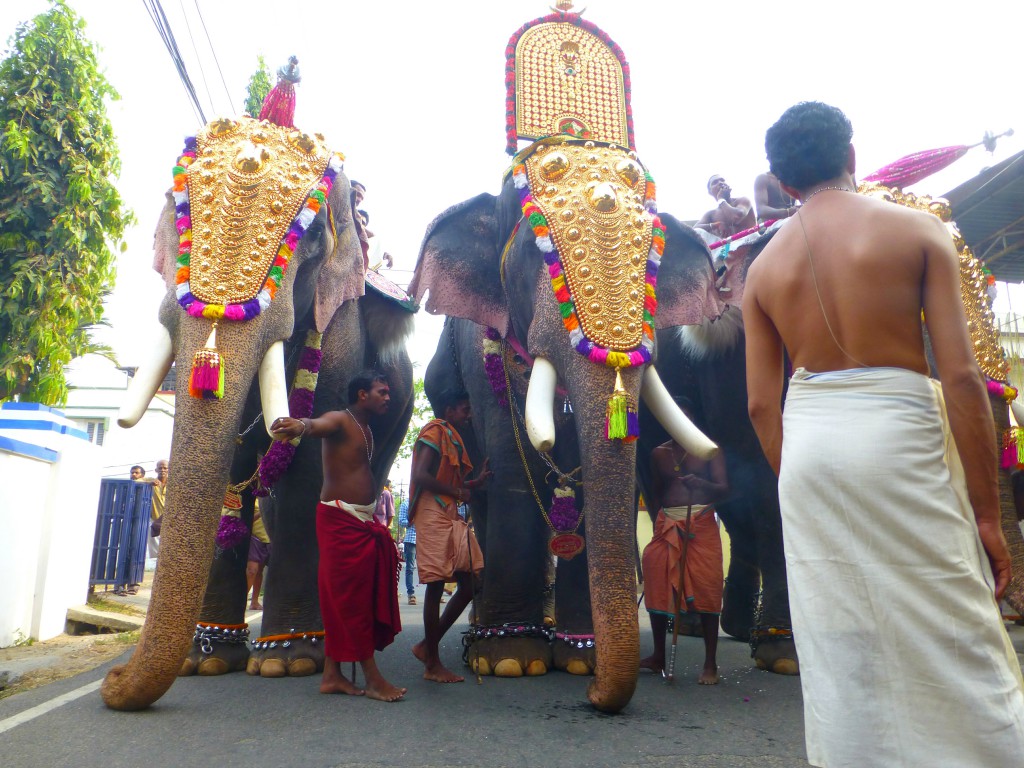 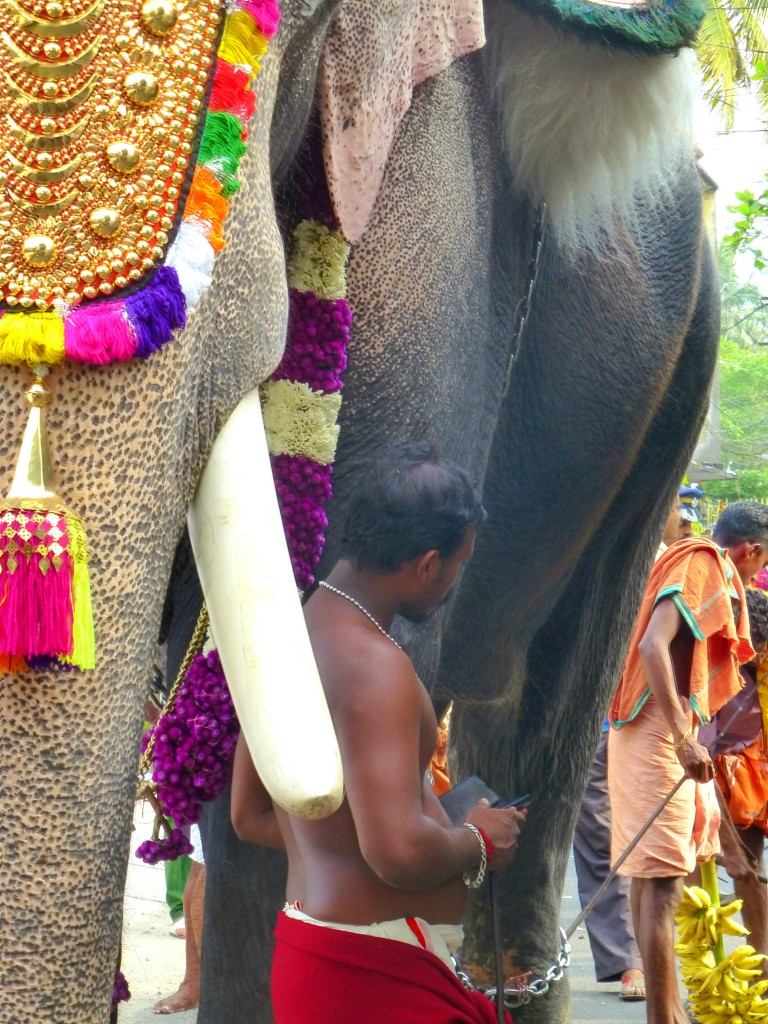 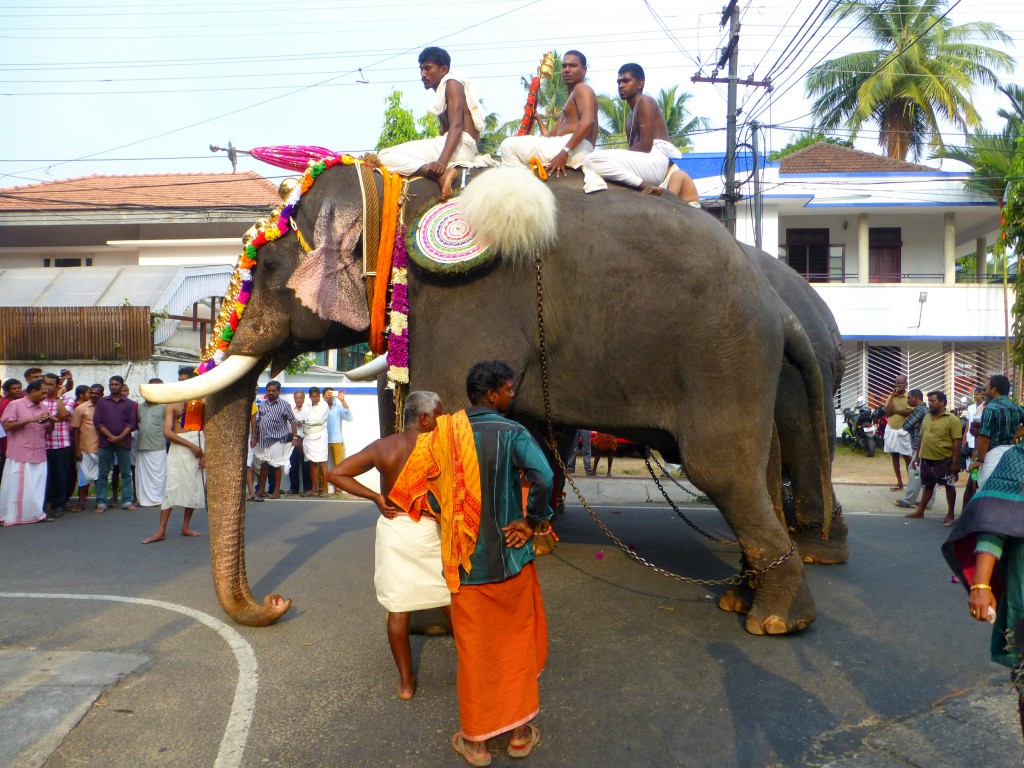 It got later and later and I was still standing behind those three enormous holy elephants. And at some point, just as many Indian people did, I passed them. Well, I can assure you,three elephants in a small street…there wasn’t much space left. I stepped over the gutter on the side of the road to pass them. When I looked to the side, passing the elephant, I saw his leg, it was as high as I was!! Unbelievable. If I had extended my arm a bit I would’ve touched it.

I have never been that close to an elephant! I thought it was kind of exiting and will not soon forget that moment!!

Did I make you curious about India? Read more!!

My 5 Highlights of Delhi

5 Tips to Increase your Safety during the Dark Hours

Or can I inspire you to go walk a Pilgrimage… The famous one called Camino Frances?