The Beach of Papanasam is filled with locals that come here to bring a family member to eternity.. Spreading the ashes, after many rituals lead by a holy man, into the ocean. When I first came to the beach I didn’t know about this. I was not aware of the rituals and the importance of this particular part of the beach in Varkala. I soon found out!

When I walked to Papanasam beach I saw a couple of beds…made of sand. Not every bed was occupied. I was curious by the meaning of this so I went and sat down for while to observe this. 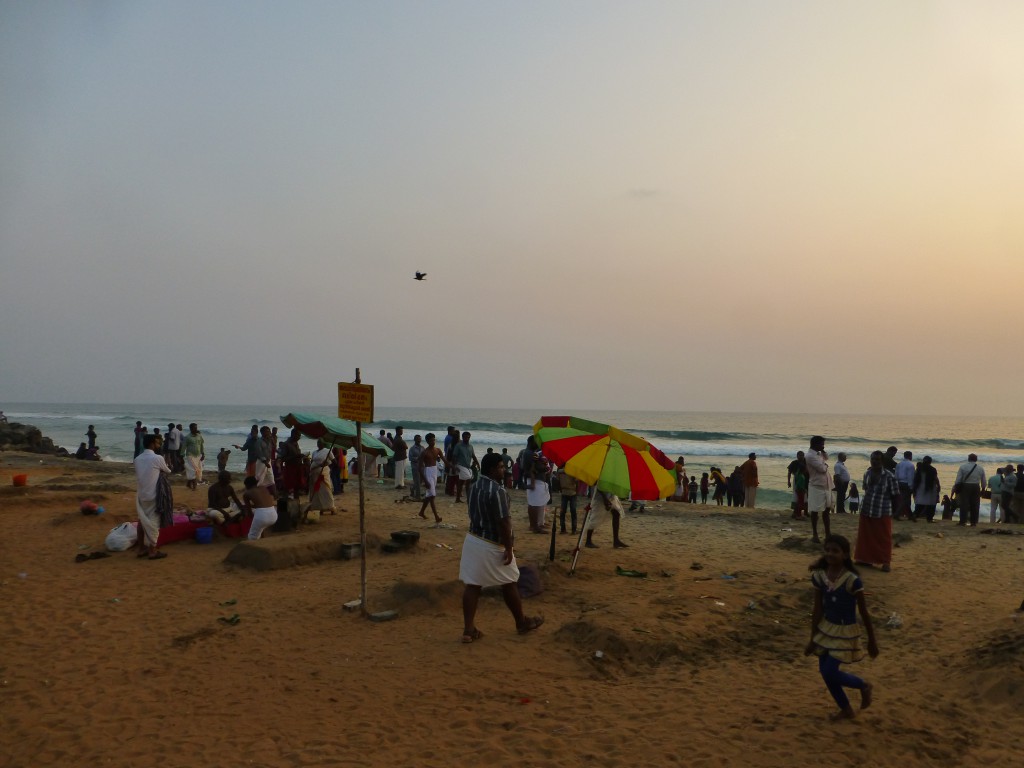 I saw a man, a holy man, sitting on one of the beds. He had all kinds of herbs, fruits and supplies near him and when he saw me looking he gestured me to come with him.

Puja on the Beach of Papanasam

I looked around….was wondering if he really gestured me to come. When I looked again he raised his hand again to me and pointed in front of him. He wanted me to sit there…

I didn’t know what to do….I didn’t really know what the meaning of those rituals were. I walked up to him and sat down in front of him. 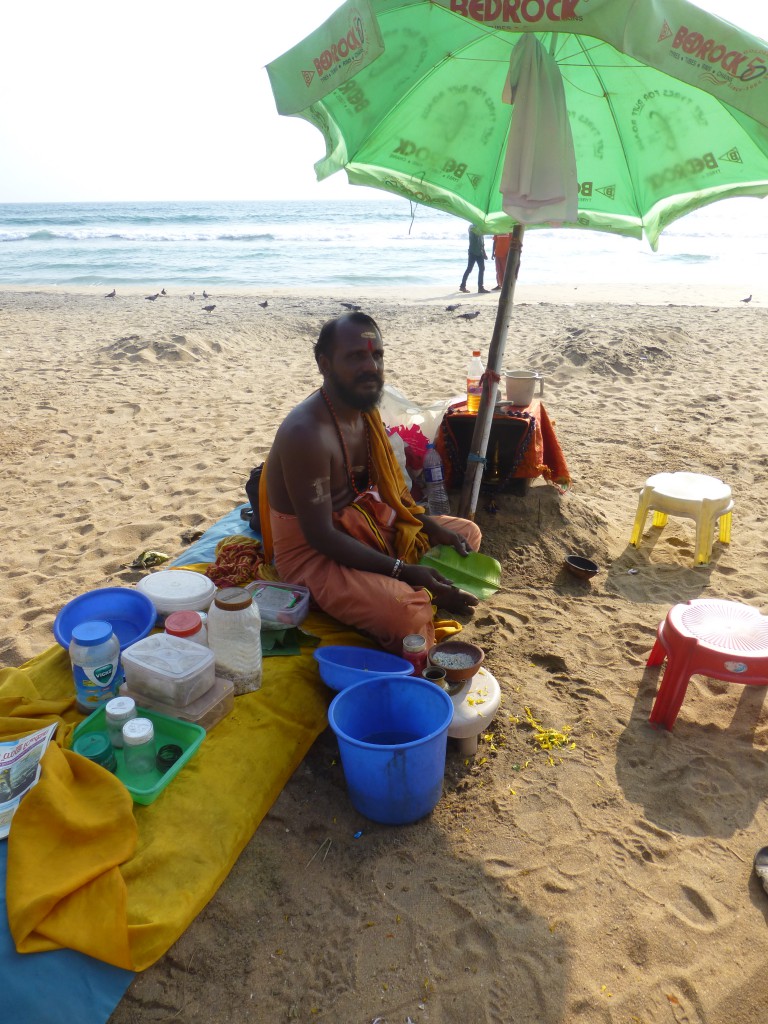 He started to put a straw around my finger and lay down a bananaleaf in front of me. He put something that I don’t recognize on it, a couple of small sticks/wood. He asked me the name of my grandfather and grandmother. And then he started to say or sing or chant a lot of words. He gave me flowers and he gestured to me that I had to lay some of it on the bananaleaf.

I had seen this before, at the wedding I attended. I started to understand what he was doing.

After a while, and a lot of flowerleafs, he added also a banana and then gave me rice. He poored water over my hand so the rice would flow onto the bananaleaf.

At the moment of a wave coming I threw it in and when the wave returned to the sea it was already gone. It was under water and taken by the ocean. I looked around me and was wondering what to do. And again I saw the holy man looking at me and gesturing I should come back. 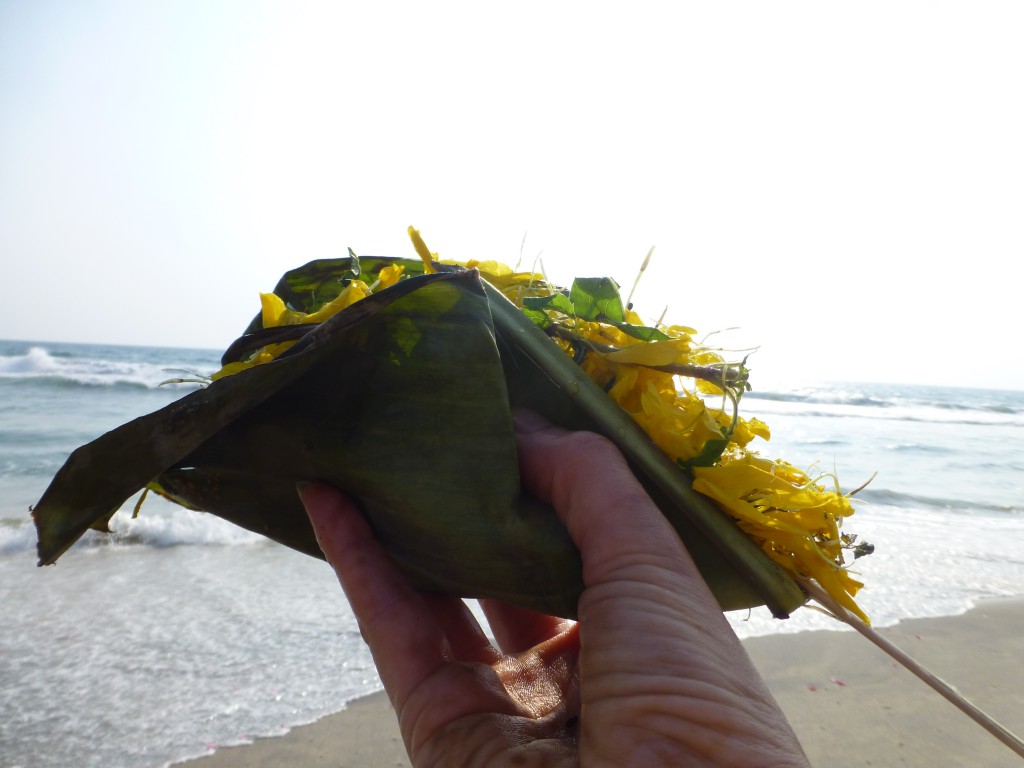 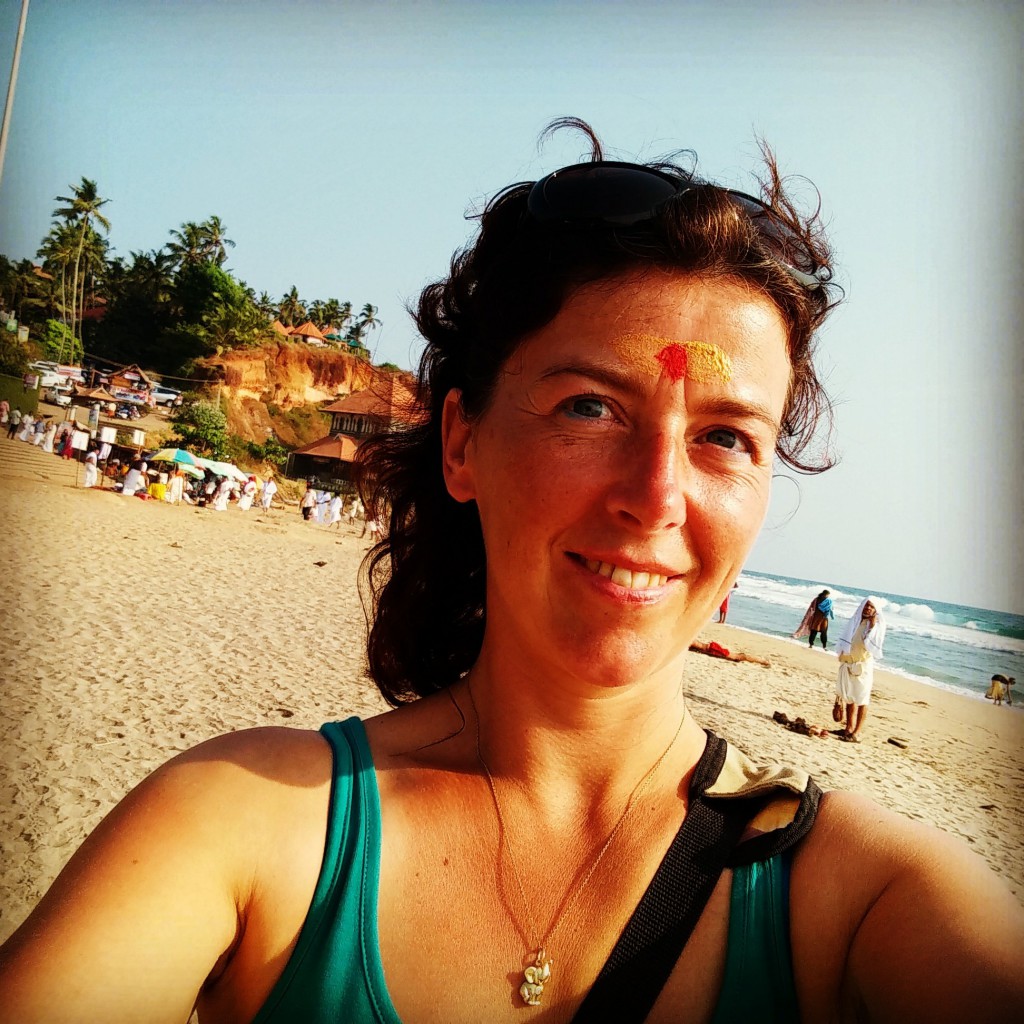 And again he gave me a smile.

And then he was just a man who was curious 🙂 in bad English he asked me where I was from, what work I did and what I liked about India 🙂

In the next days I went back to that part Papanasam beach. It’s the end of Papanasam beach near Hindustan Beach Retreat. My hotel was near Varkala Beach so I had to walk a while but every time it was worth it. Every day so many people went to the holy men sitting there. I saw people walking with ashes of dead, I think, relatives. So impressive to see that part of their life, it is always a difficult moment to say goodbye I think. I didn’t saw any grief, no tears, they were all happy but serious.

After the offering they would stand together, watching the sea….
Just captering the moment. 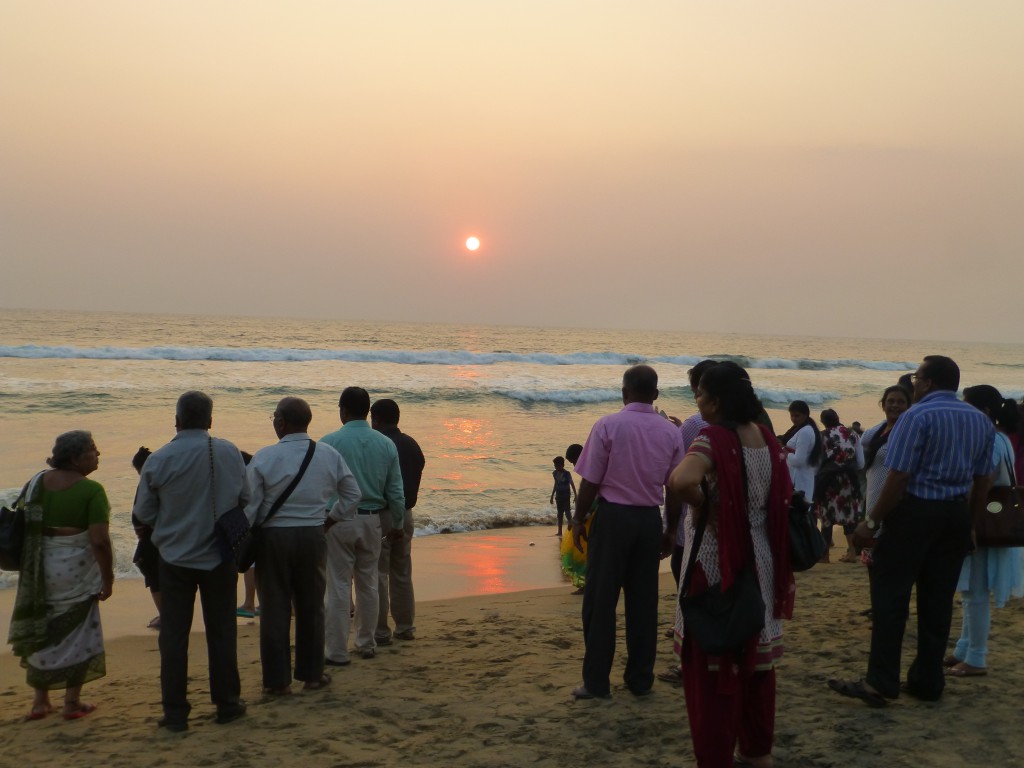 Great to be a witness of that!!

I asked an acquaintance to explain to me what they were doing and what the meaning was of what I was seeing.

So then I found out it is called Pūjā, it is a prayer ritual performed by Hindus to host, honour and worship one or more deities, or to spiritually celebrate an event. It is pronounced as pooja or poojah. It may honour or celebrate the presence of special guest(s), or their memories after they pass away. The word pūjā comes from Sanskrit, and means reverence, honour, homage, adoration, and worship.

So I was honouring the life of my grandfather and grandmother 🙂 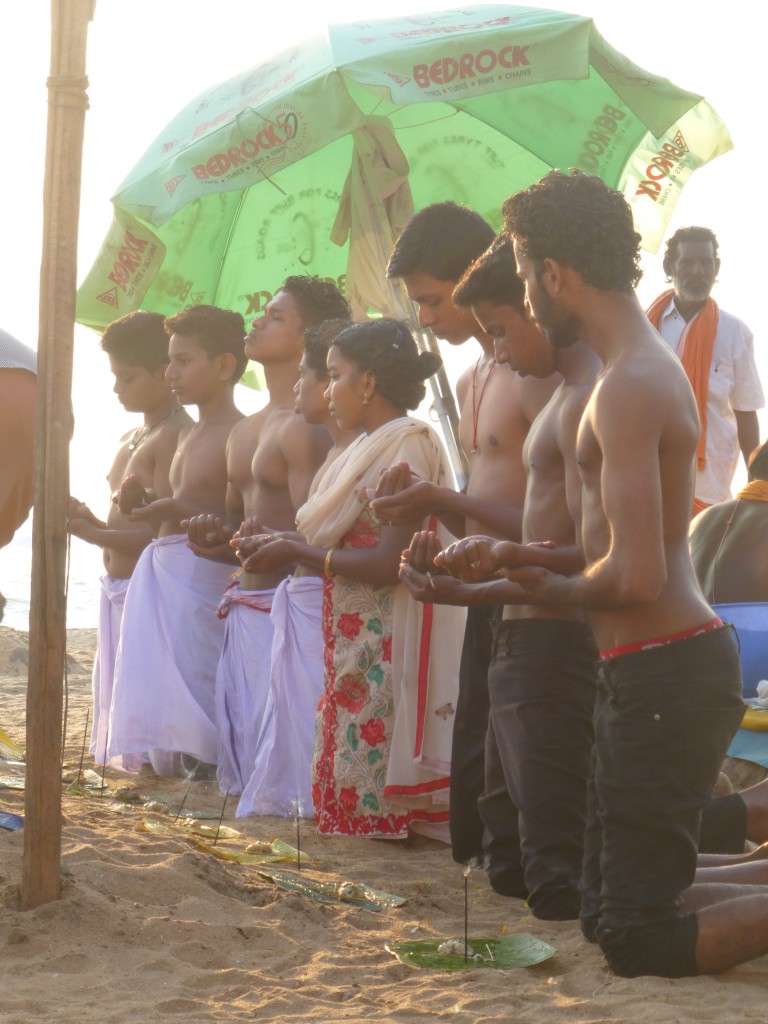 Multiple people in front of a holy man performing Puja 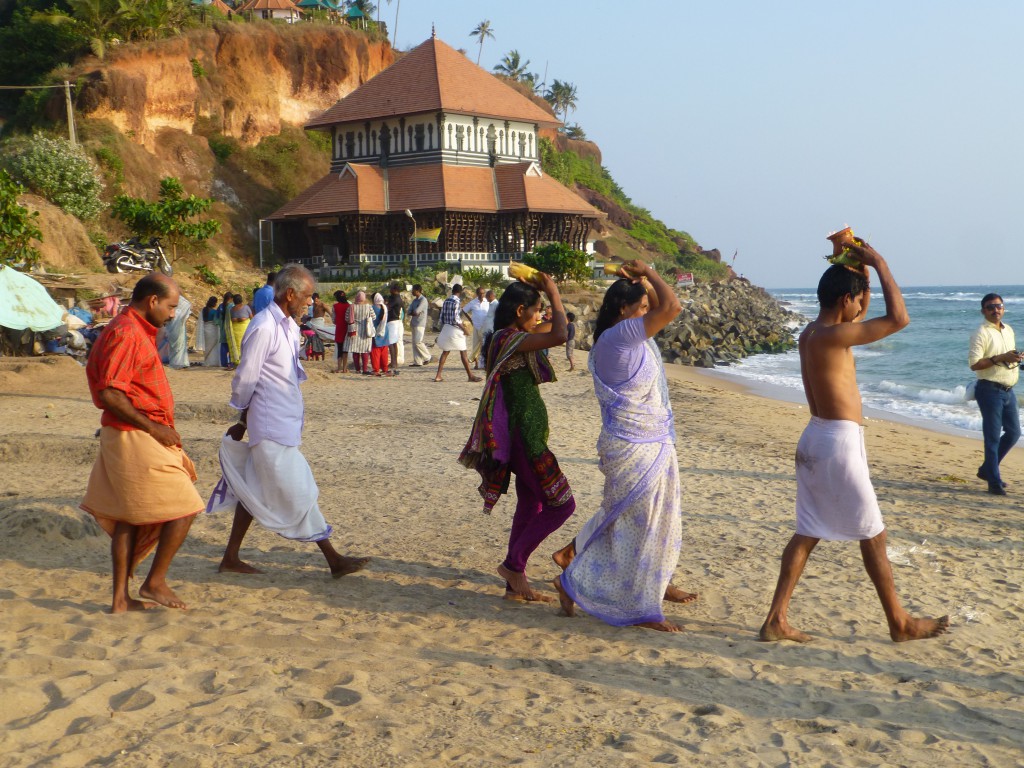 Walking with the ashes on his head to the sea 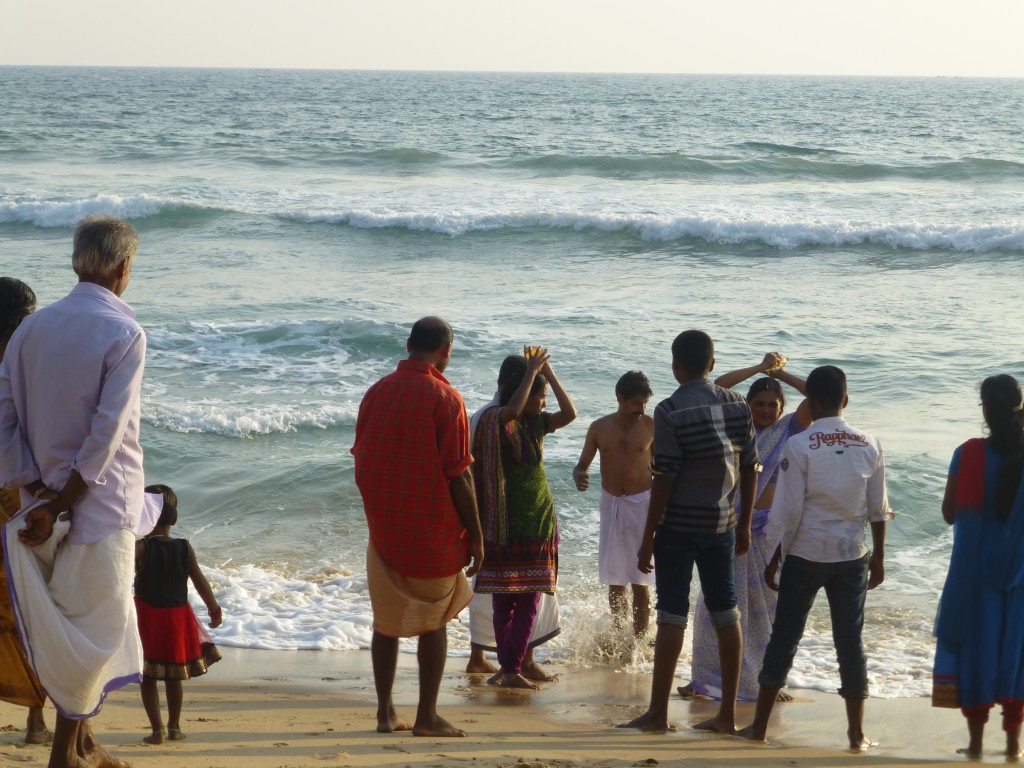 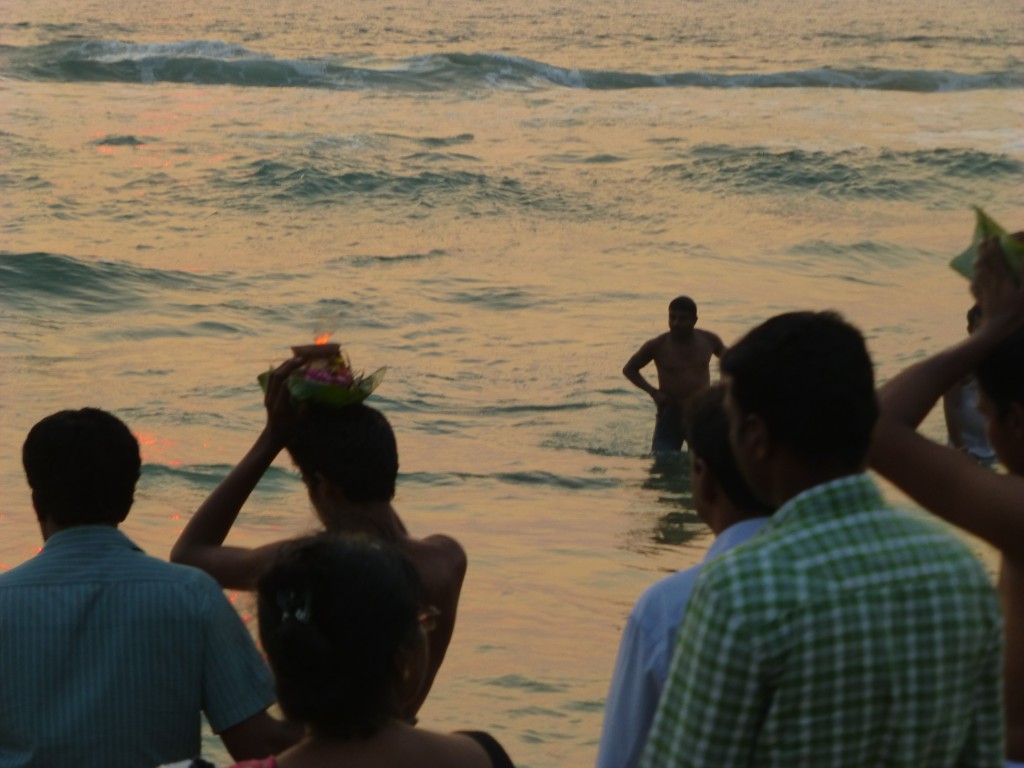 With the ashes of a dead relative to the sea 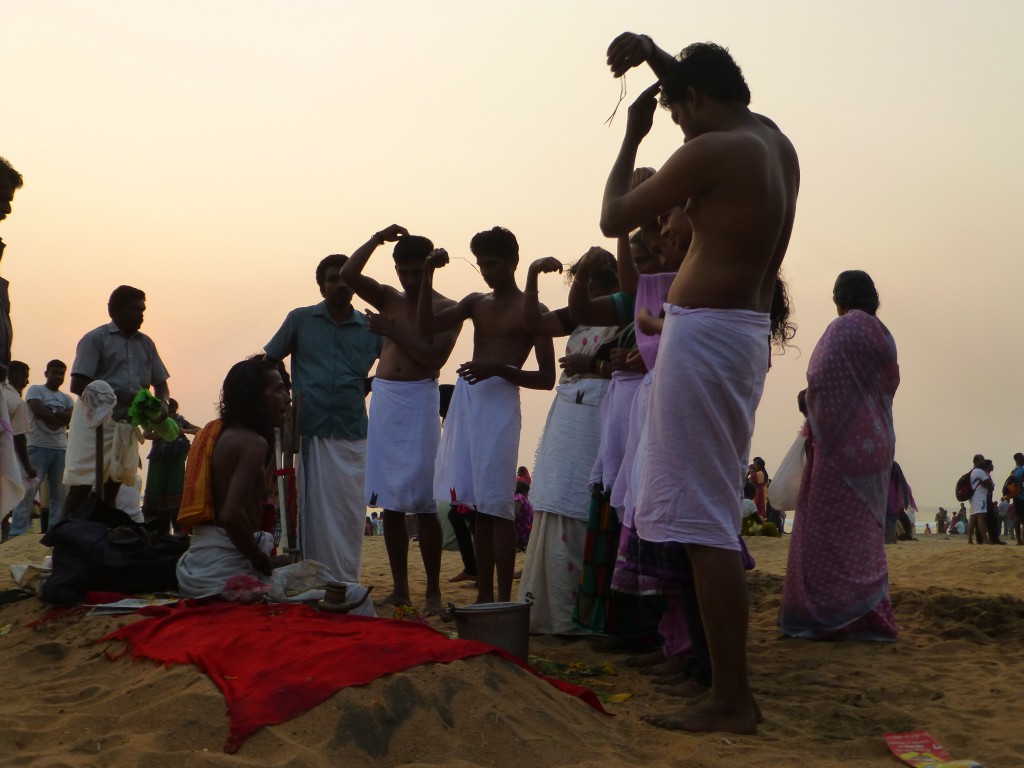 I love the intensity of India! I love my travels through this great country!!

If you liked this story will you share it for me? 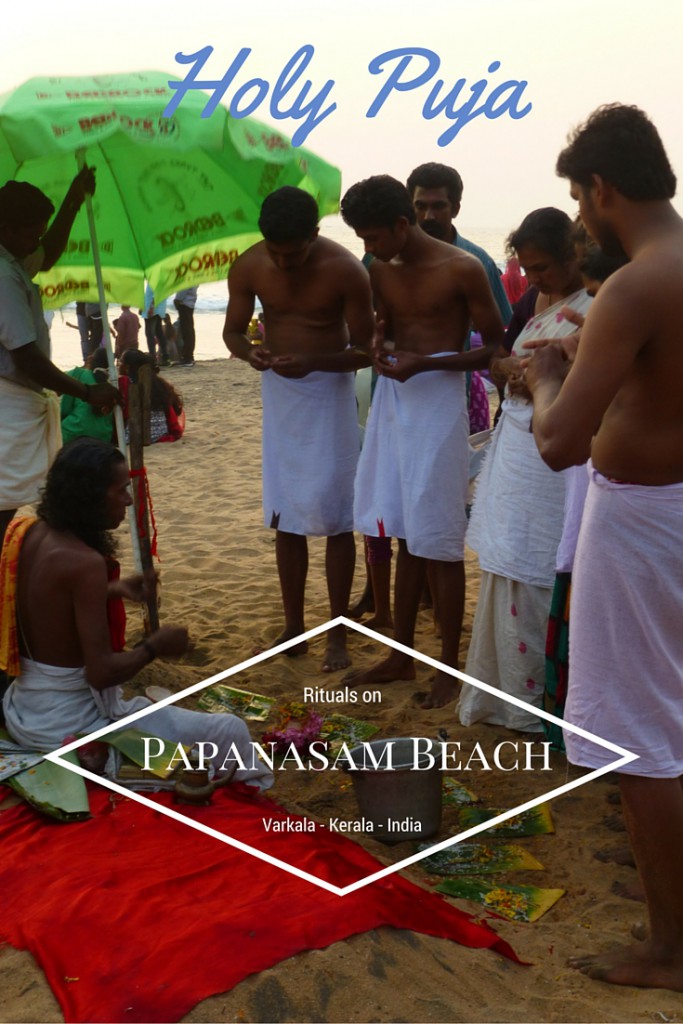 If you want to read some more about India check these out!!

The Complete Travelguide to Mumbai

Or how about Sri Lanka?