When you were intriged by the war in Vietnam and used to watch Tour of Duty when you were little you need to go visit the Cu Chi Tunnels when you are in Vietnam. I booked this trip while in Ho Chi Minh City and went from there in a day to these impressive tunnels! 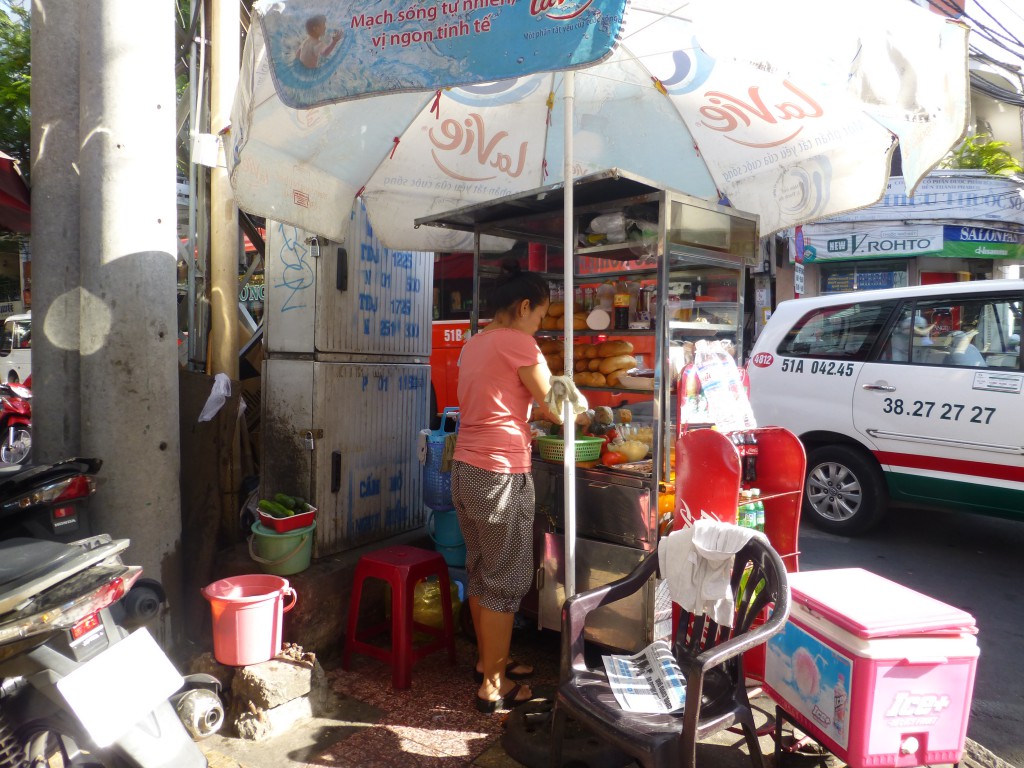 Before going on the bus this morning I bought a nice sandwich on the corner of the street! I can really recommend you to go for these cheap but delicious sandwiches too!

From Ho Chi Minh City you can book a daytrip to the tunnels, before going there you will visit also the biggest Cao Dai temple of Vietnam in Tay Ninh.Really interesting! 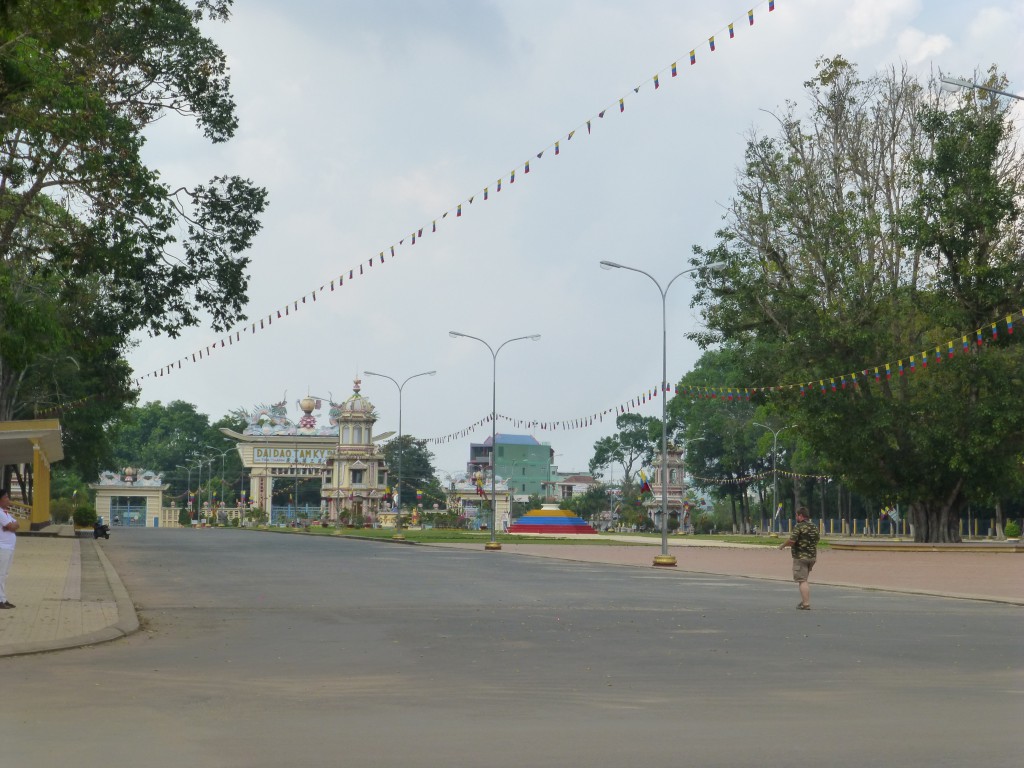 Square in front of the Cao Dai Temple 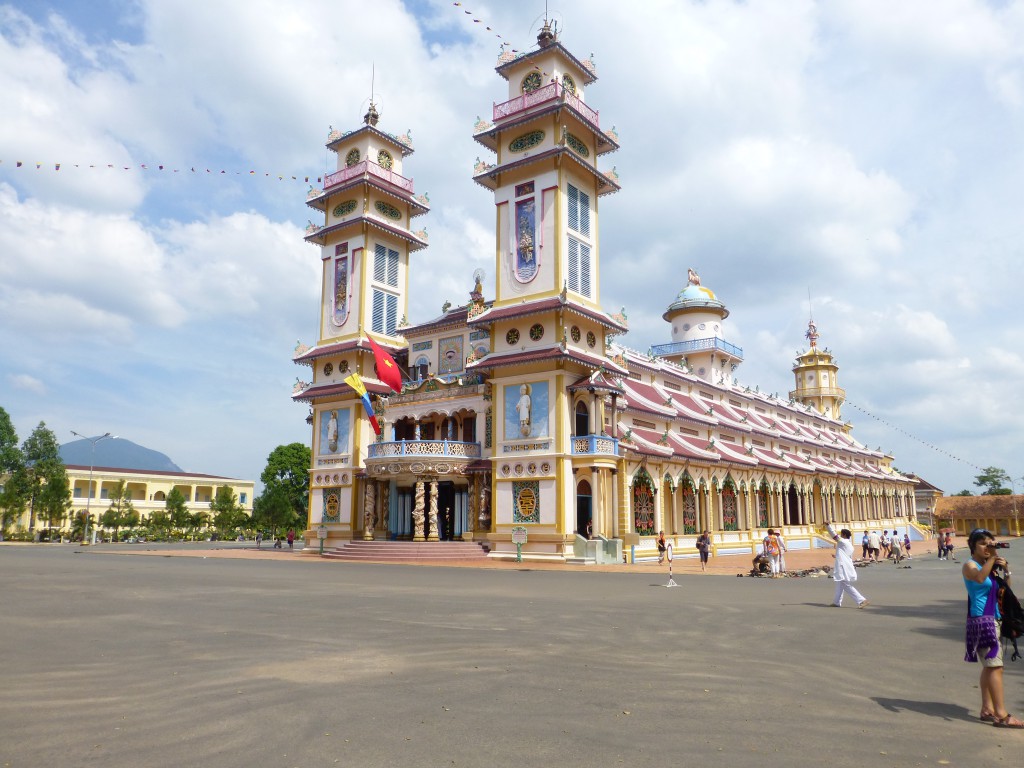 Most colourful temple I have ever seen!!

This temple has an appearance of a Disneyworld building. It is very colourfull and the way it is build is very nice and playful. In this Cao Dai temple there are more religions practised. When we were there we saw a prayer, this was held by many monks. They were singing and praying along side eachother.

You can see from with religion they are by the colour of the clothes, but most of them were dressed in white. We saw yellow robes that belongs to the Buddhist, the blue robes at the Taoist and the red ones with the Confusionist.

I really liked seeing this, I think it is great to see the different religion under one roof and worshipping the same principle. This is where it’s all about in all believes, one God and Peace on earth. Simply put, that’s where it is all about. 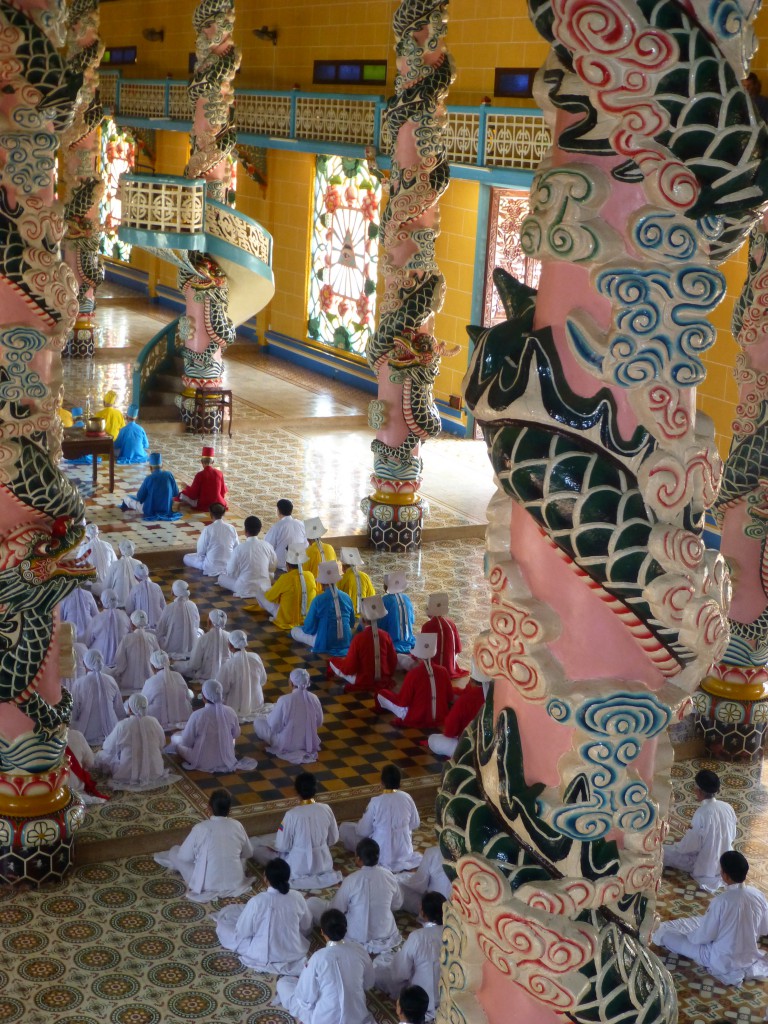 During lunchtime we arrived at the tunnels.  At the Cu Chi tunnels we were advised to put on anti mosguito because we went into the jungle. There could be a lot of mosquitos ofcourse, I didn’t have any bites in there but if you have blood they like you will get some.

Before entering the jungle we got some explaining about the tunnels and how life was in those days of the war with the Americans. In the building were we got the explaining was half digged into the ground. De roof was low and probably not really visible when the jungle surrounding it was high and with some camoflage over it. 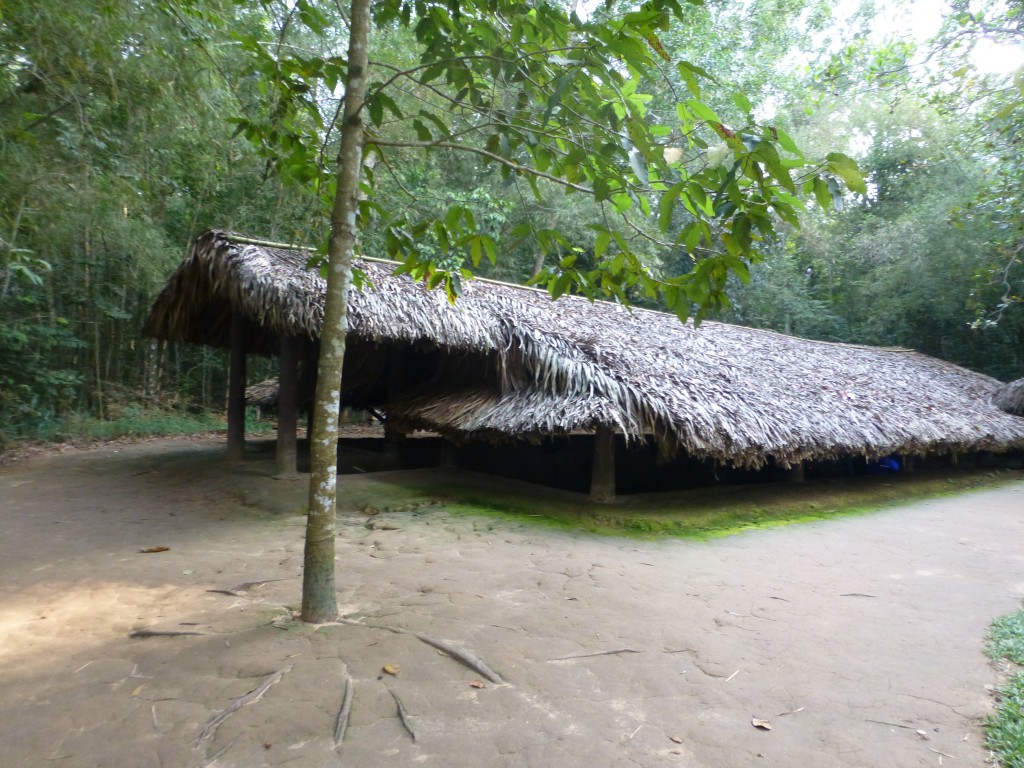 During this explanation they showed us a big board on which you could see the Cu Chi tunnels, how they are digged and how deep they were.  Those tunnels were meant for different uses.

The pipeline was not directly up but went sideways to the surface. So when they would see smoke coming out of there they wouldn’t be underneath it. If the Americans would go digging there they wouldn’t find them immediatly but the Vietnamees would hear them and start defending so they would leave or at least stop digging.

They told us that they would only cook in the morning hours. The smoke coming out of the pipline would go into the morningmist so it didn’t show that much. When they cook they made enough for a whole day.

Deep underground tunnelsystem of the VC 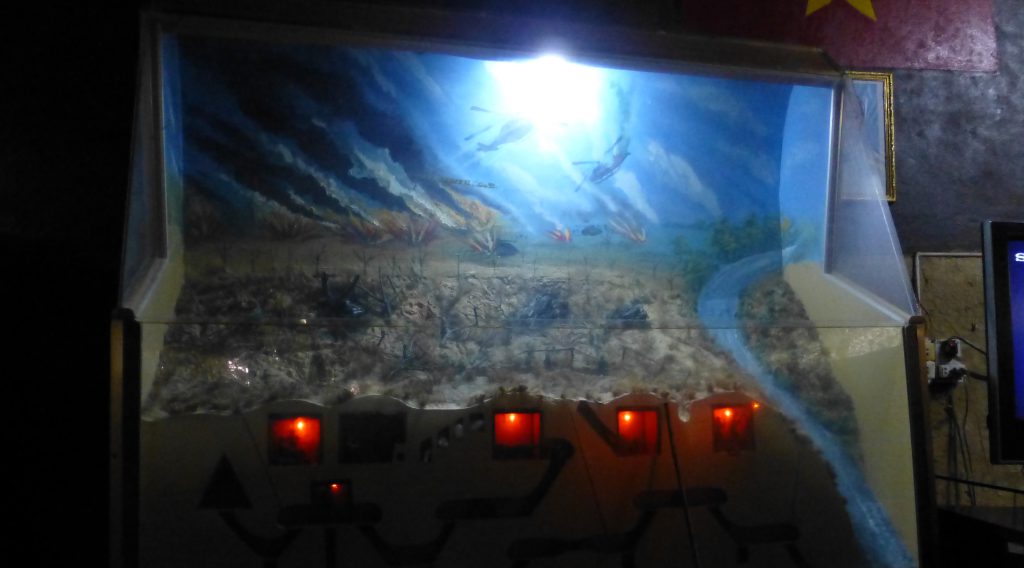 After this we went walking into the jungle. Everywhere we saw holes and parts that looks like anthills. On many of those places were entrances or exits in the old days. Now they were nice and ferm but they weren’t that visable during the war. 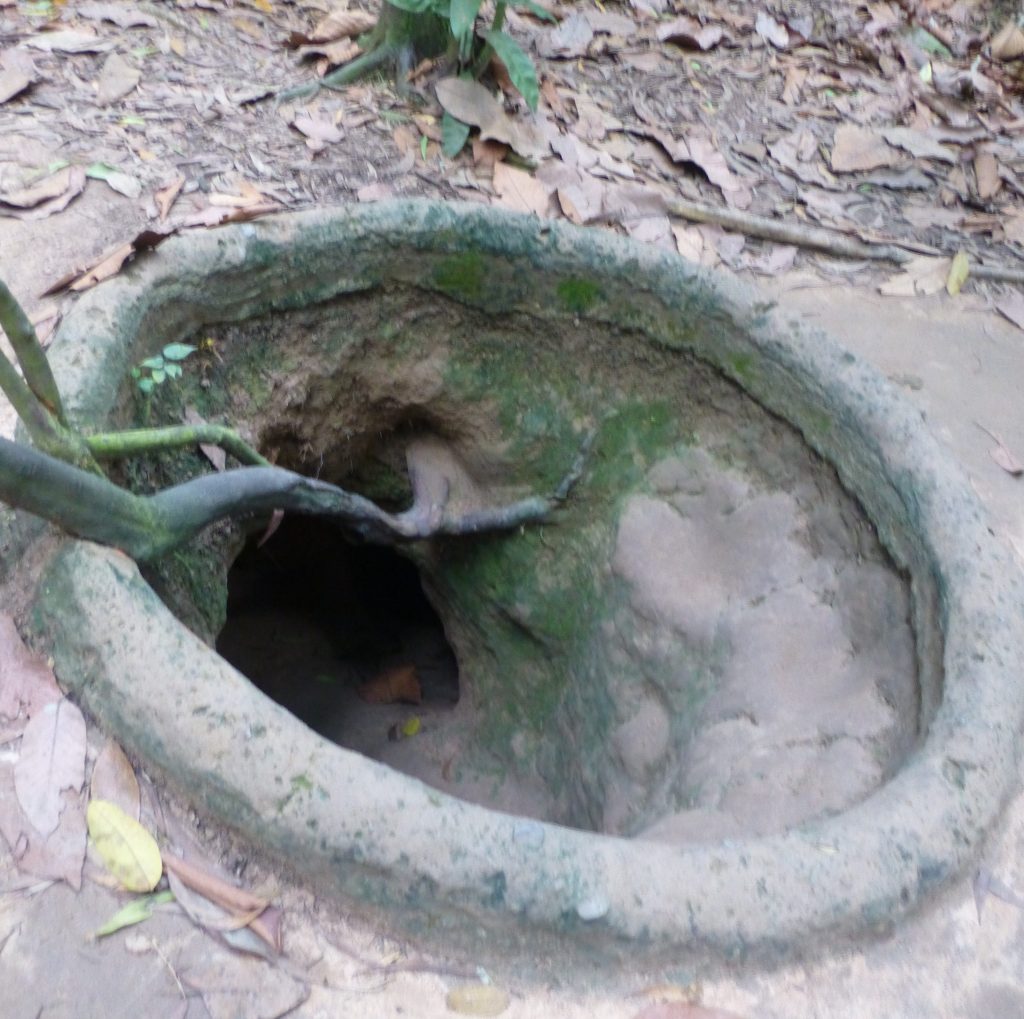 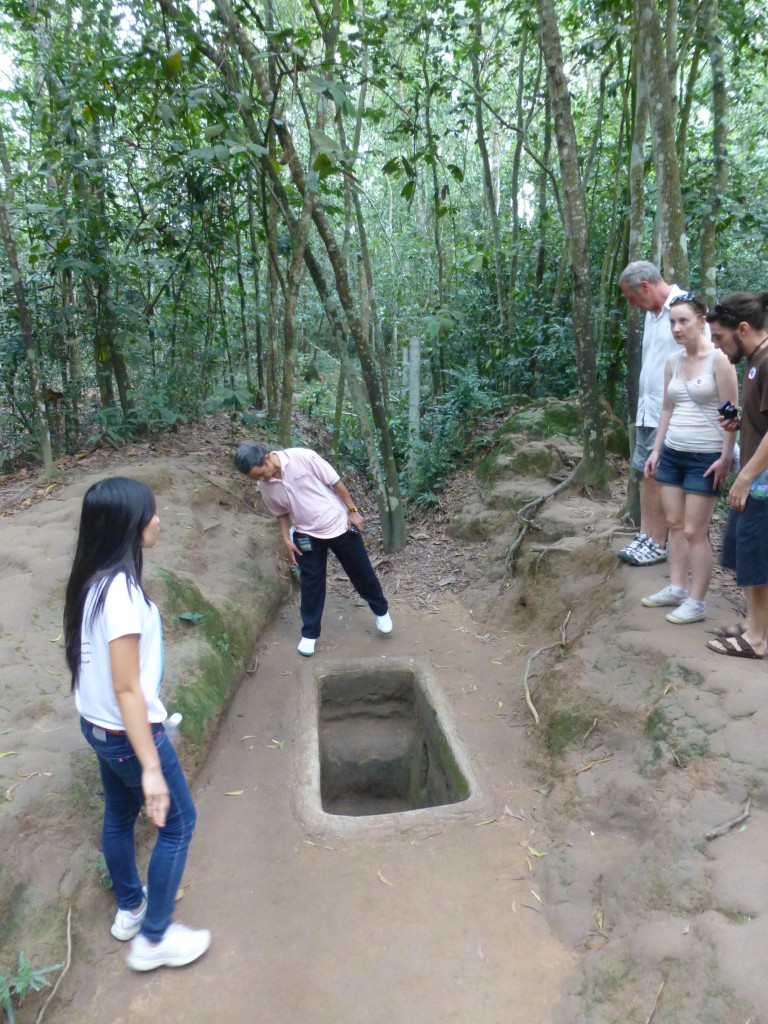 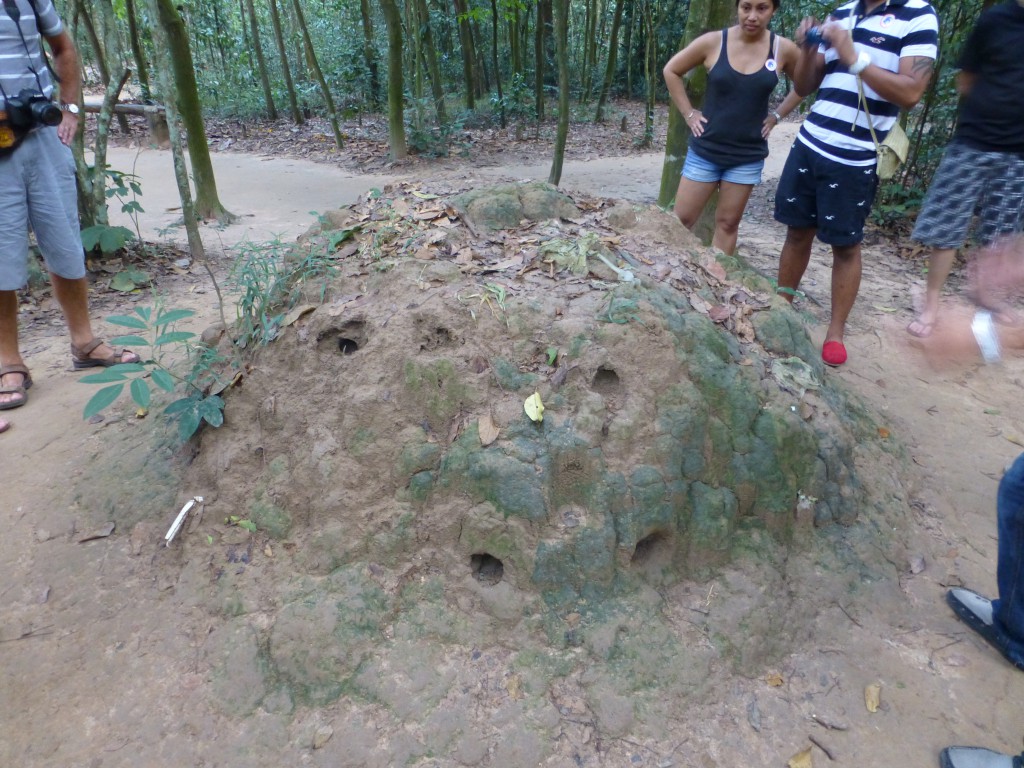 At first  you see an anthill. But looking better, knowing how they build the tunnels you know that underneath is the tunnel.

Along the paths they made through the jungle they show the life of the people here during the war. They had several scenes placed and our guide told us stories about them. There was an old American tank that was still there. It was bombed and abandoned. 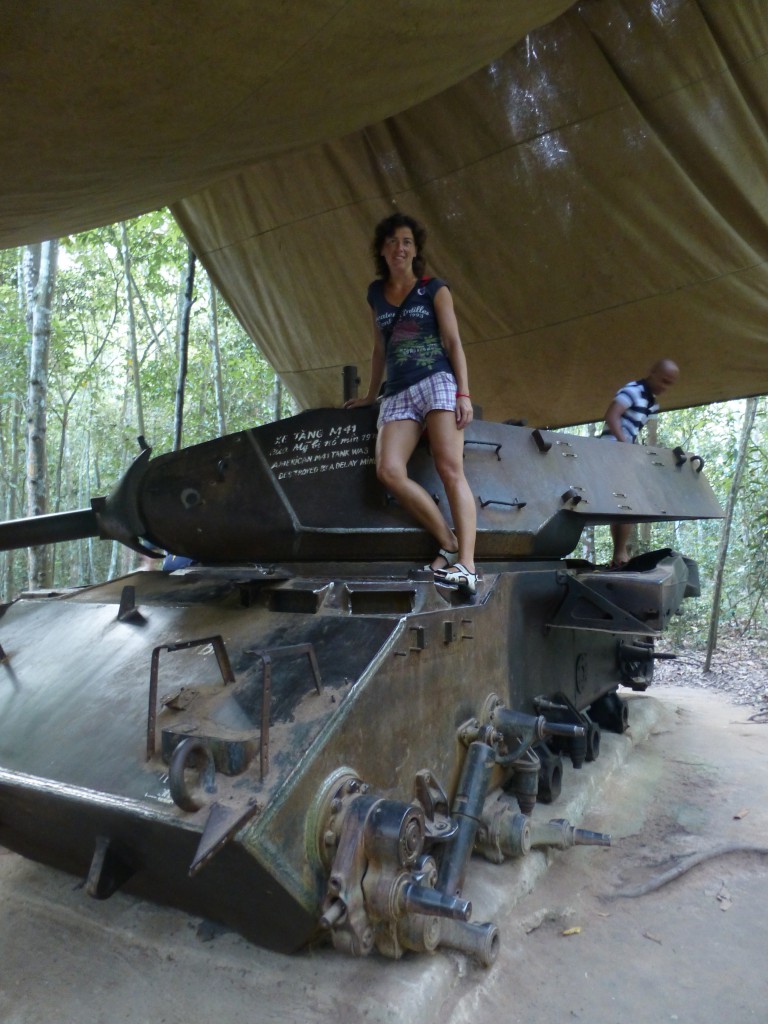 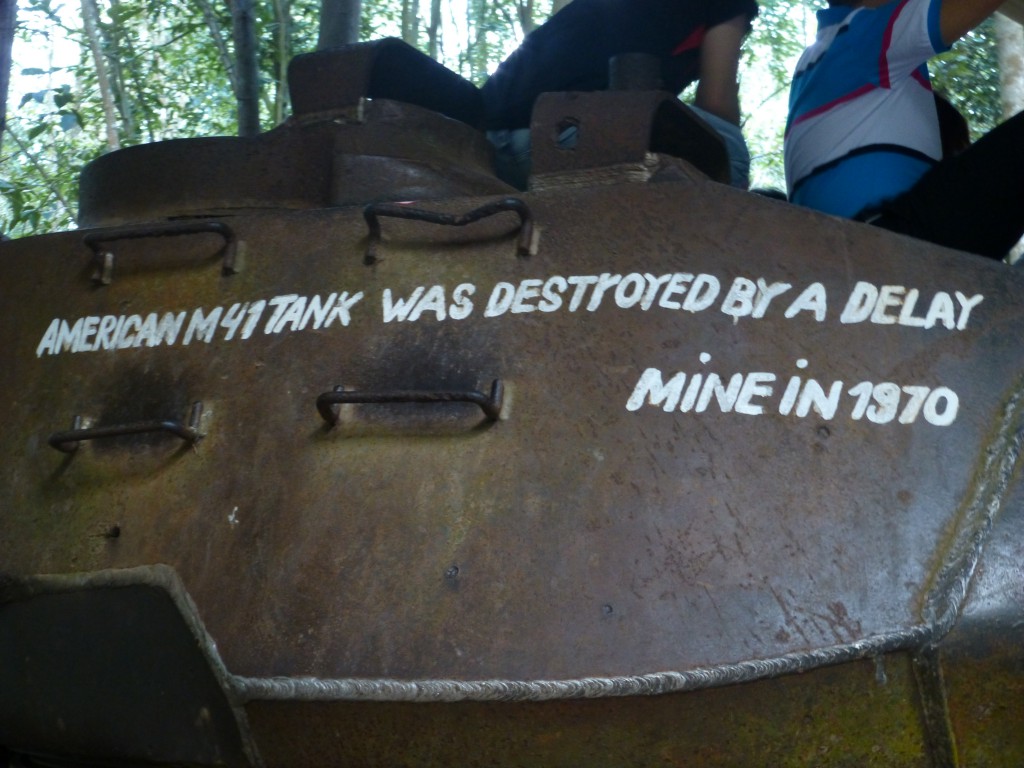 And we saw the horrible traps, the boobytraps they used in those days. These were horrible traps. When you fell in one you would be lanced with bamboosticks or iron sticks which were placed underneath there. De death they died was horrible. Because of the pain they suffered the Vietnamese people would here them and know that the Americans were near.

Boobytraps of the Vietcong 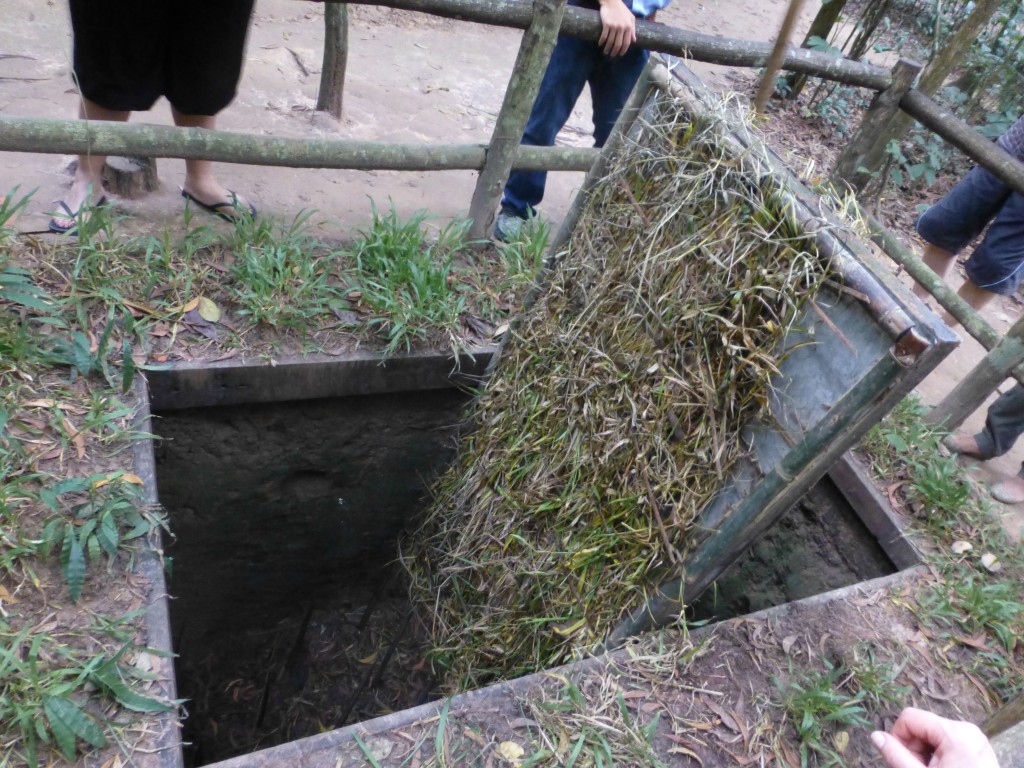 At some point we got at an exit where we could go in. It still was the size it was in those days, so very small! On the exit was a lid, on that lid you saw some leafs and dirt. It would mask the exit when you were in there.  The exit was that small that most of us wouldn’t fit in there. A couple of us wanted to go in there, including me ofcourse.

Disappearing in the Cu Chi Tunnel…

When I entered that small hole it was a little bit bigger than at first sight. Underneath it was a small space where you could sit down. In the old days the space was connected with the tunnels but that wasn’t anymore.

After realizing I couldn’t see anything anymore, not a ray of light entered the space I got up and opened it again.

It was a strange feeling, sitting and standing in a space which was used in wartime. Really doing what the VC did in those times to dissapear… Sitting there and staying quiet and letting the US army pass… 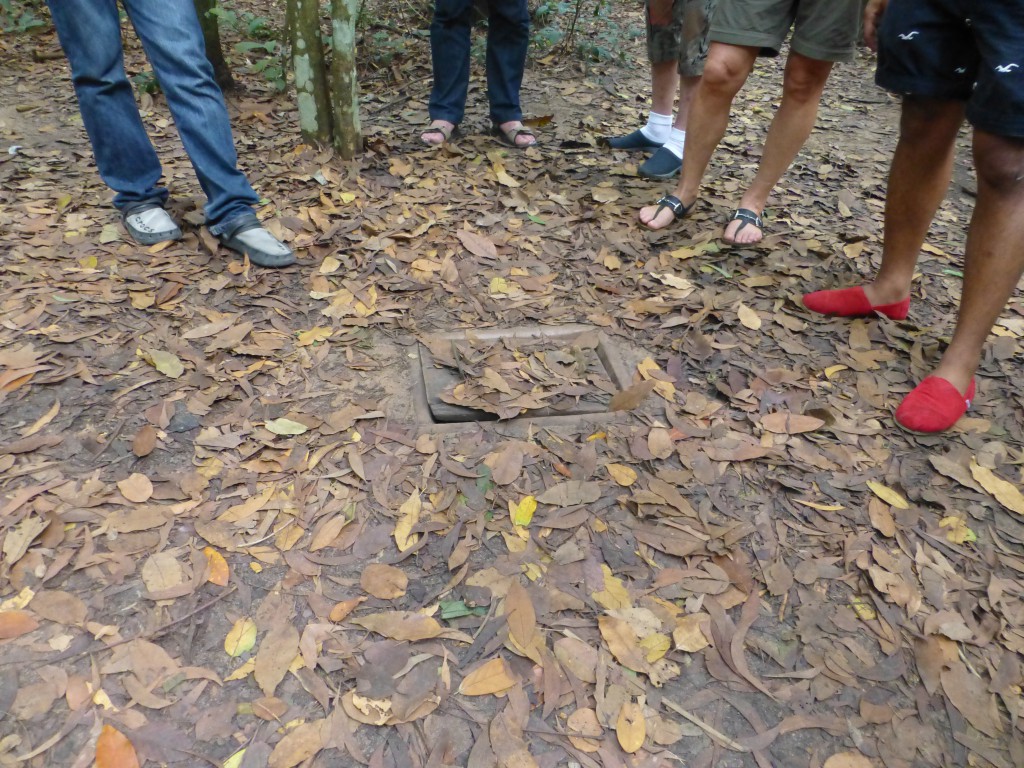 Walking further we entered a newly made entrance. It was made for us tourist to go in and walk a bit in the tunnels, well walking?? You could crawl or walk bended down because of the hight of the tunnel.  We as Western people are way to big for these tunnels, even the Vietnamese are to tall 🙂 I did go in, we went in for about 100 metres. It gave me a strange feeling, thinking about what happened in these tunnels, the fear people must have felt and the fights that were held. The families that lived in here for years… 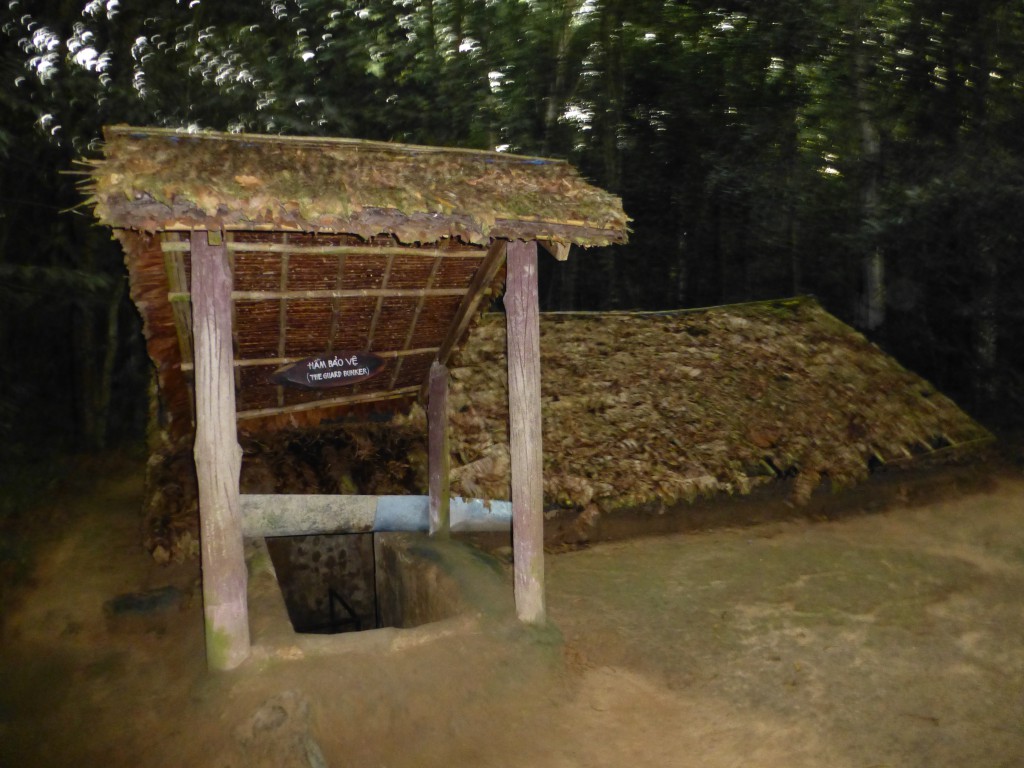 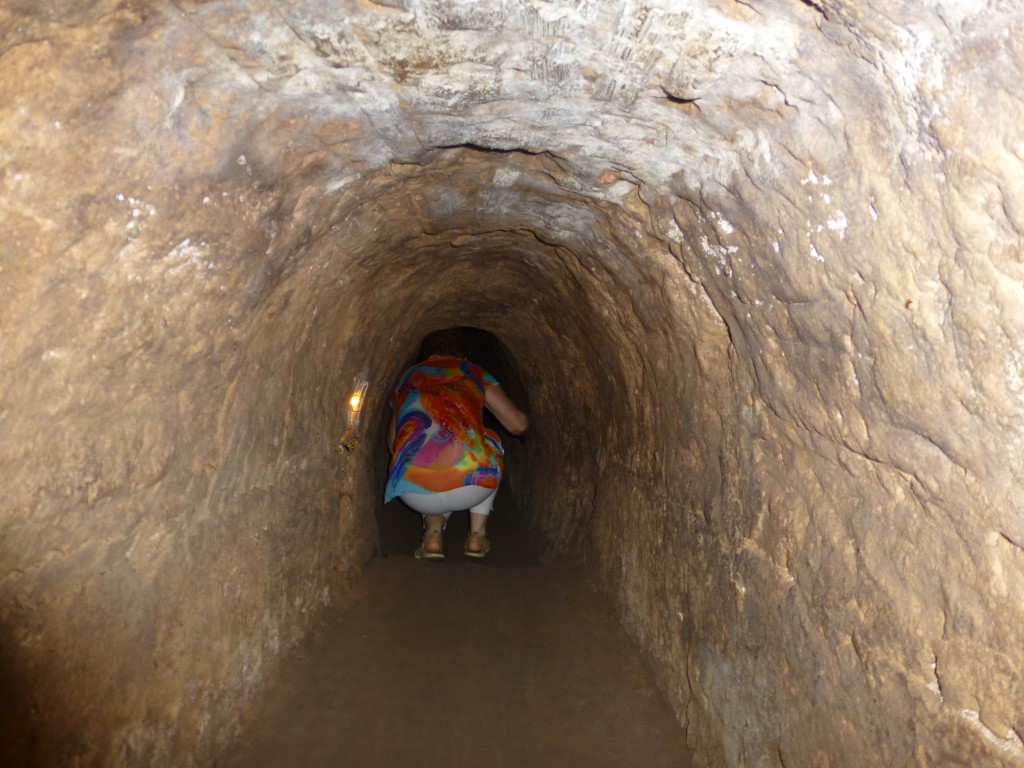 It was kind of small!!

The entrances were hiden perfectly in wartime. They just walked in the jungle and didn’t see anything other than jungle. But still you are getting attacked by humans which will dissapear without a trace. I can imagine that the soldiers would get totally paranoid. Being there, not knowing your surroundings and getting attacked from everywhere but never seeing the Vietnamese. What a horrible war, for both sides. What if an entrance was found and they wanted you to get out and made a fire to smoke you out the tunnel. A horrible thought!

Luckely for us after the 100 metres there was a good exit made for us.

And then the most touristic thing about this tour..

After the tour we could go shooting with some old guns they still have there. You can buy some ammunition and shoot that with the gun you choosed. I bought some bullets with an American woman just to shoot like everybody else. 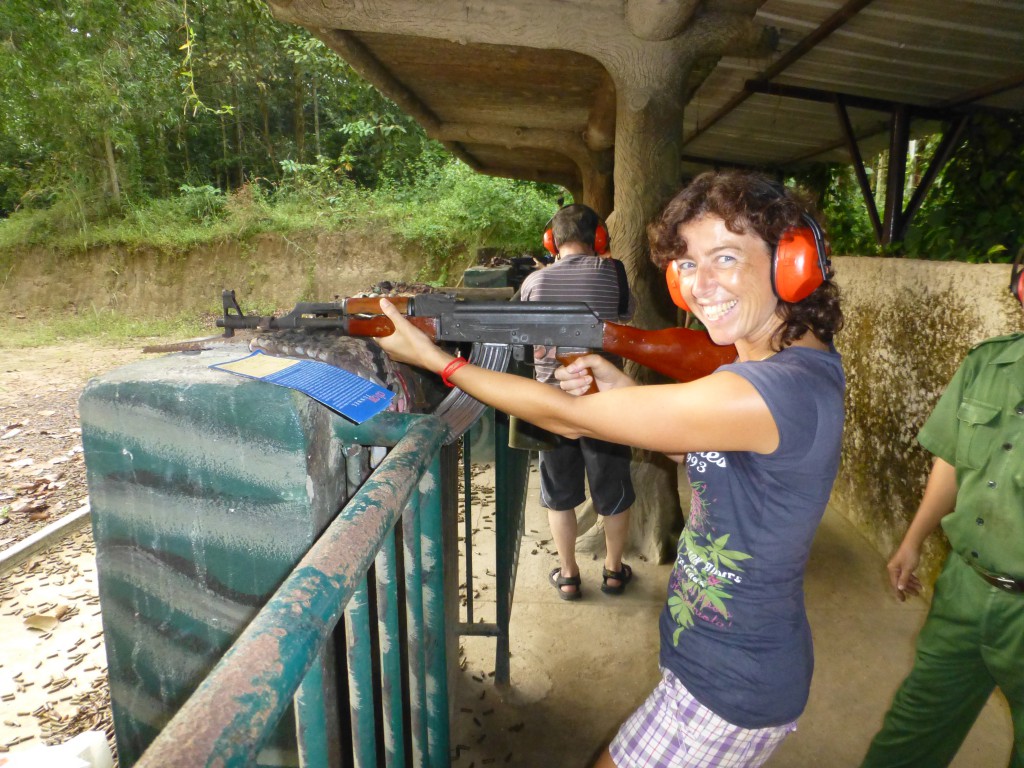 And then the long drive back to Ho Chi Minh City. I admit that I closed my eyes on that long way back. When I was in HCM again I was ready to go for a walk in the city again!

I really thought this was an interesting day at the Cu Chi Tunnels and worth the hours driving!

I would love it if you would share it on your social media!! Do you want to read more about Vietnam?

Fairy Stream and the Sand Dunes at Mui Ne

How the locals run their markets – Vietnam

Or can I inspire you to do some Yoga?