Penang is just a small island in front of Malaysian upper coast area. It is welknown for its fabulous food scene, it has flavours combined from all over east Asia. What better place for me to get a cookingclass in Malaysia? So that is what I did and I choose a cookingclass at Pickles & Spices. 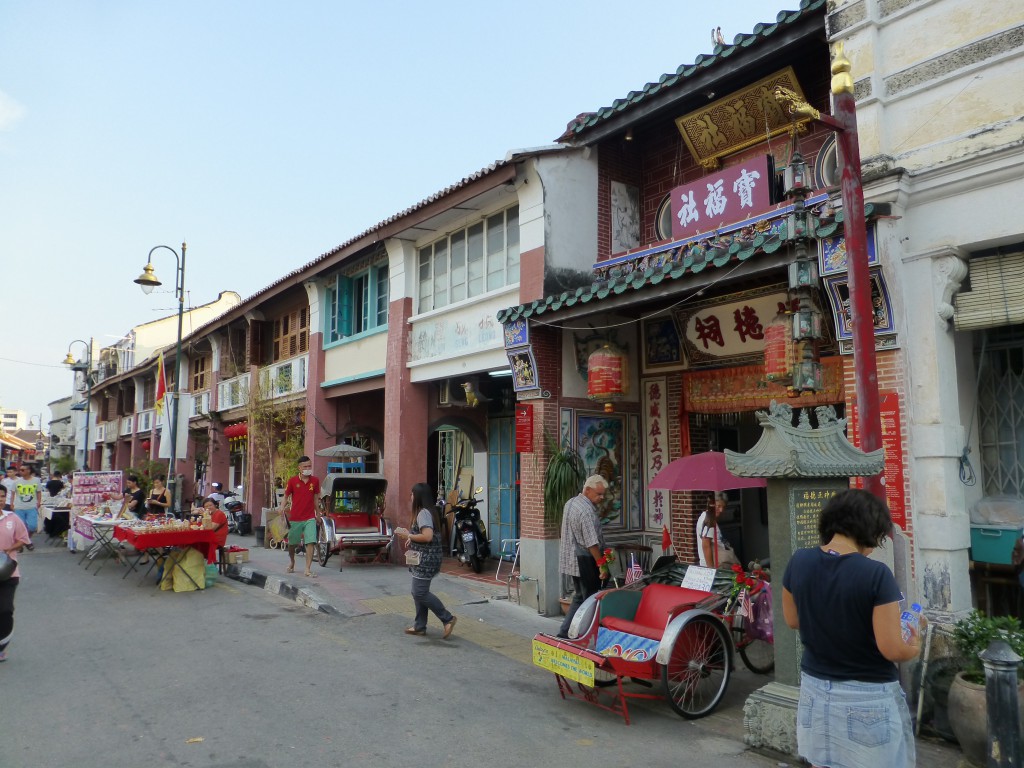 The city has a great streetview. Old colourful buildings all over the centre makes it a great place to wonder around for a couple of hours. You can see all kinds of backgrounds/religions like Hindu, Budhism and Muslim.

Penang has a great mixture of cultures! 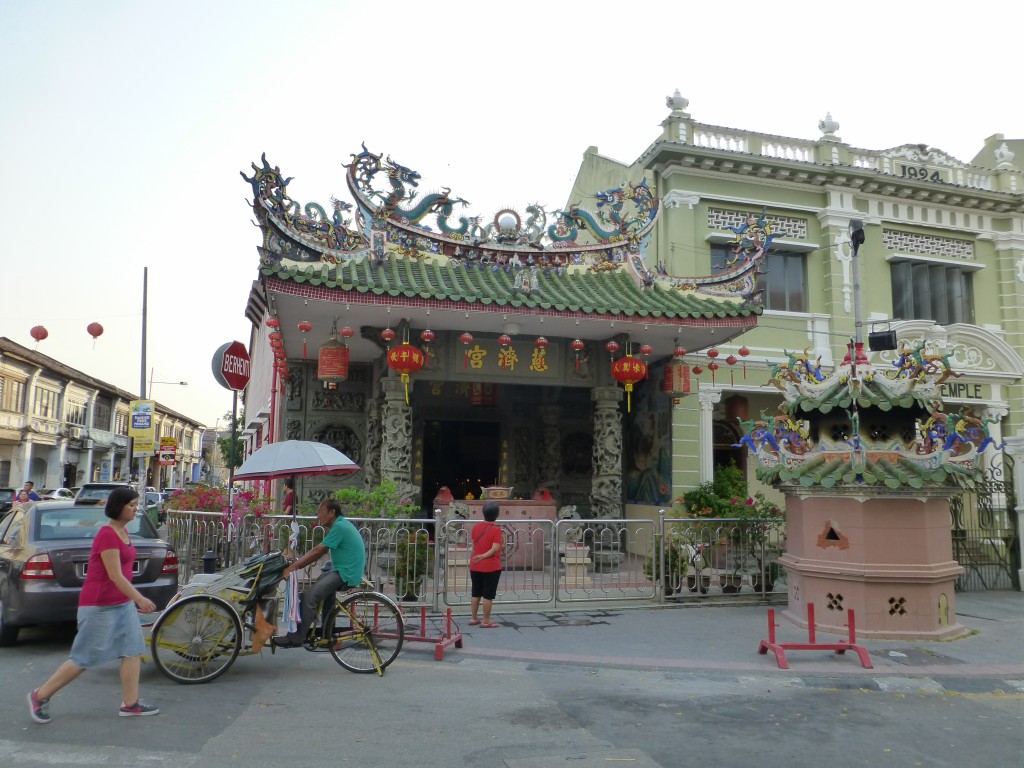 I took the cookingclass at Pickles and Spices with Nazlina. She’s a Malaysian woman and has a traditional way of cooking. We started our cookingclass, like most cookingclasses in Asia, by walking around the local market. The market in Penang is located in an old building. Nazlina told us about the history, it used to be a graveyard, there was still one big tree with an old grave underneath it. She told also that there were ghost-stories and haunted experiences in this building.

Do you also know about the haunted Kellie’s Castle? 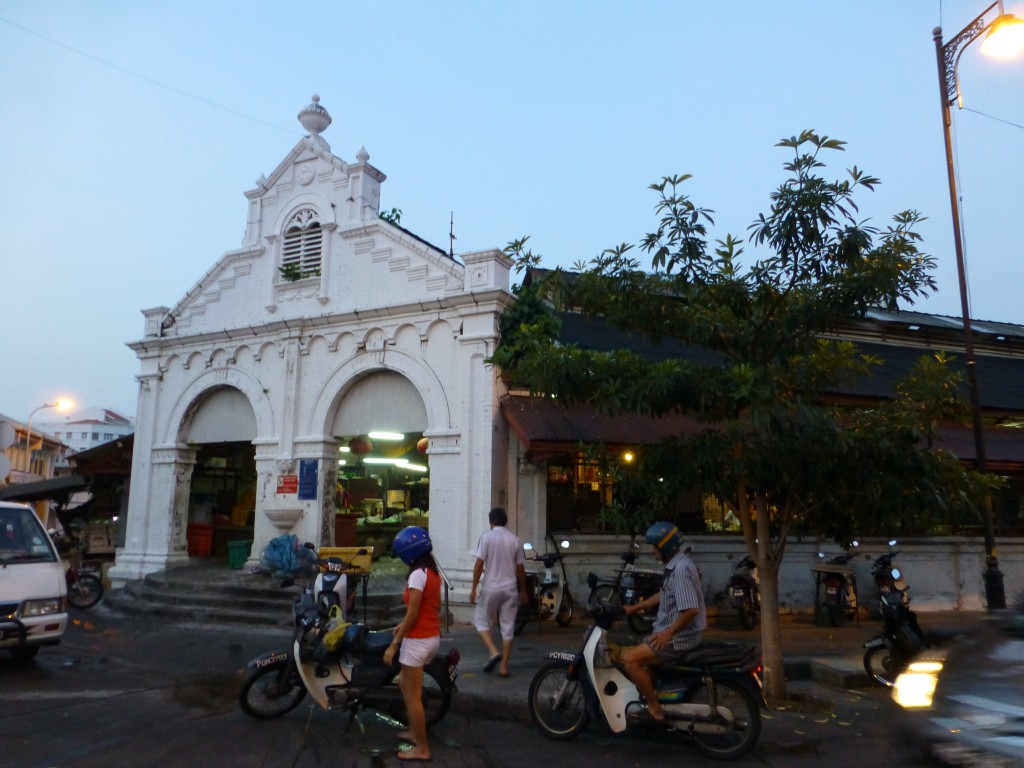 We bought some fruit and vegetables and saw a lot of meat. You would’ve think I got used to it by now but still think it is really strange that it just lays out in the open and not that hygienic… I now learned that people that buy the meat will wash it at home. Well I hadn’t thought of that.. We obviously don’t wash our meat but it is logical they do, it does make it better seeing it like this. 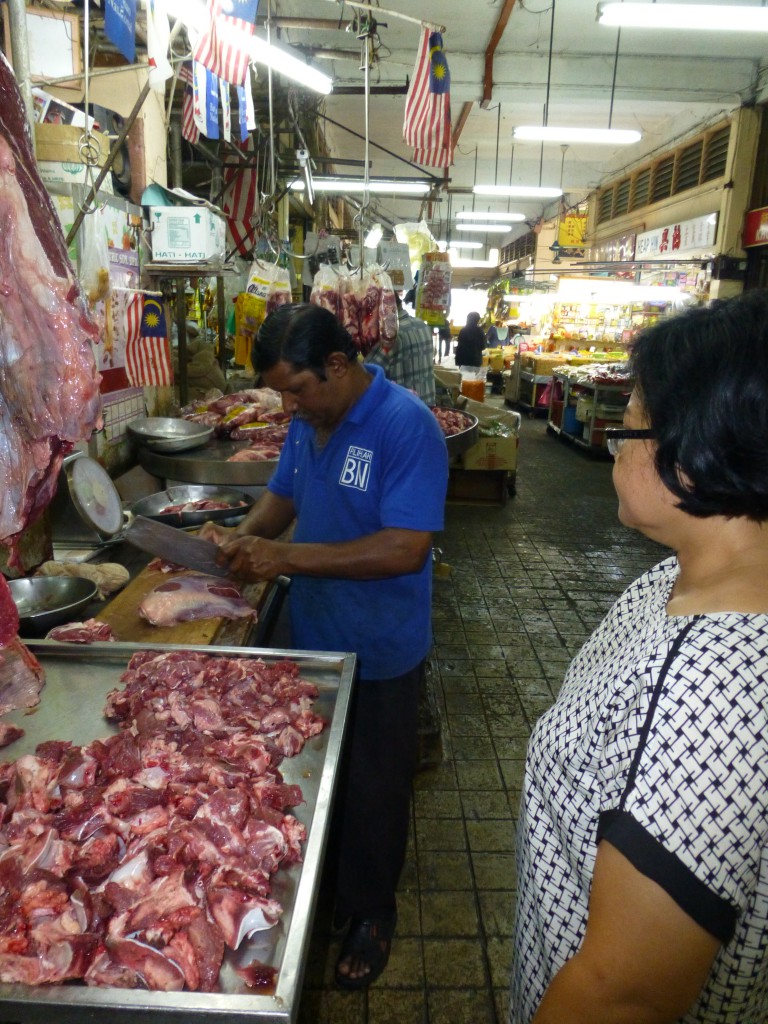 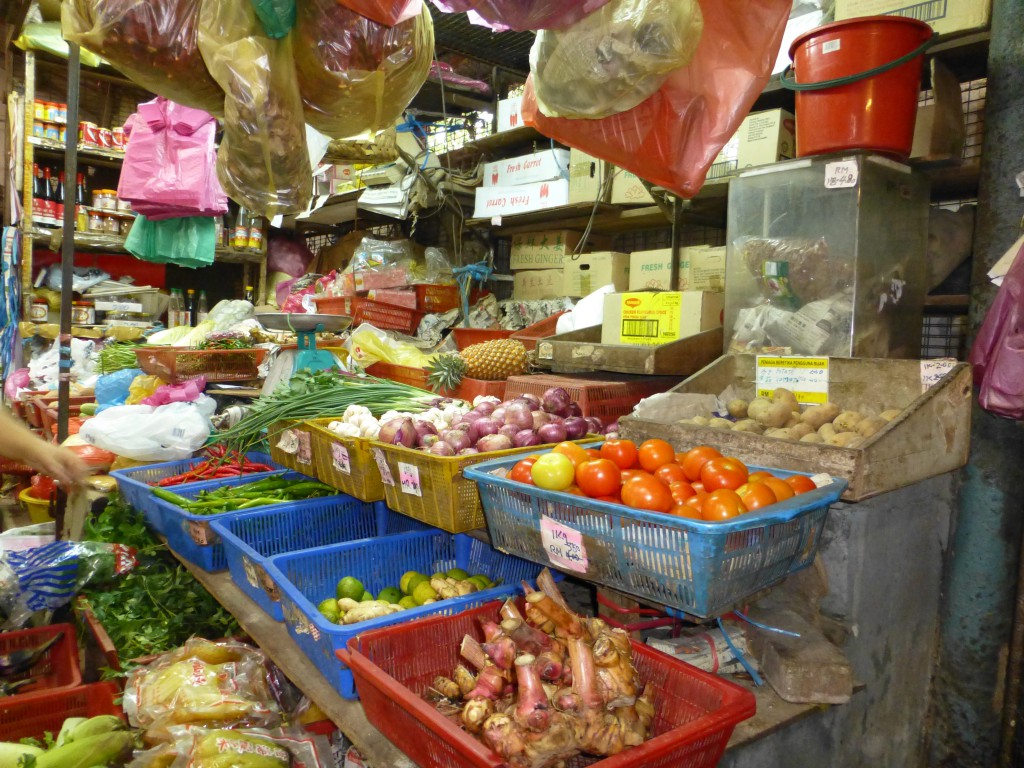 When we got at the school where we would get the class Nazlina made a great refreshing drink for us and gave us some pieces of a local apple she just bought at the market. A bit sour but a really refreshing taste. Nazlina started to clean the kitchen, it is an open kitchen in the back of the building. It has no roof and it had rained that night so there was water in every cup and wok 🙂 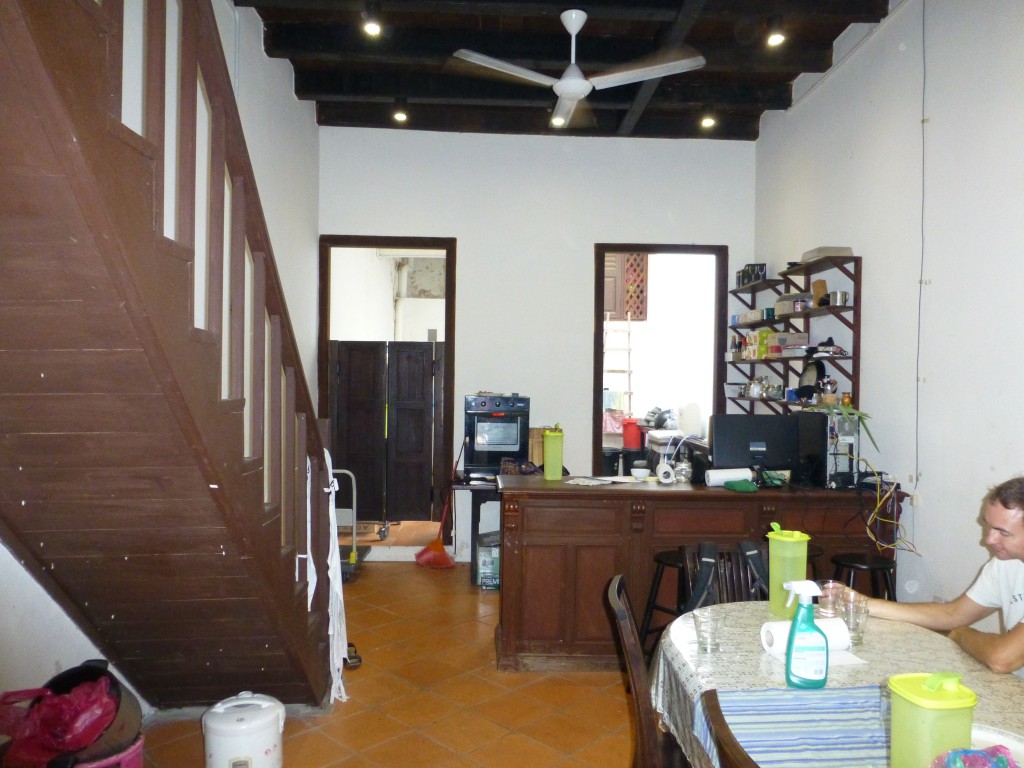 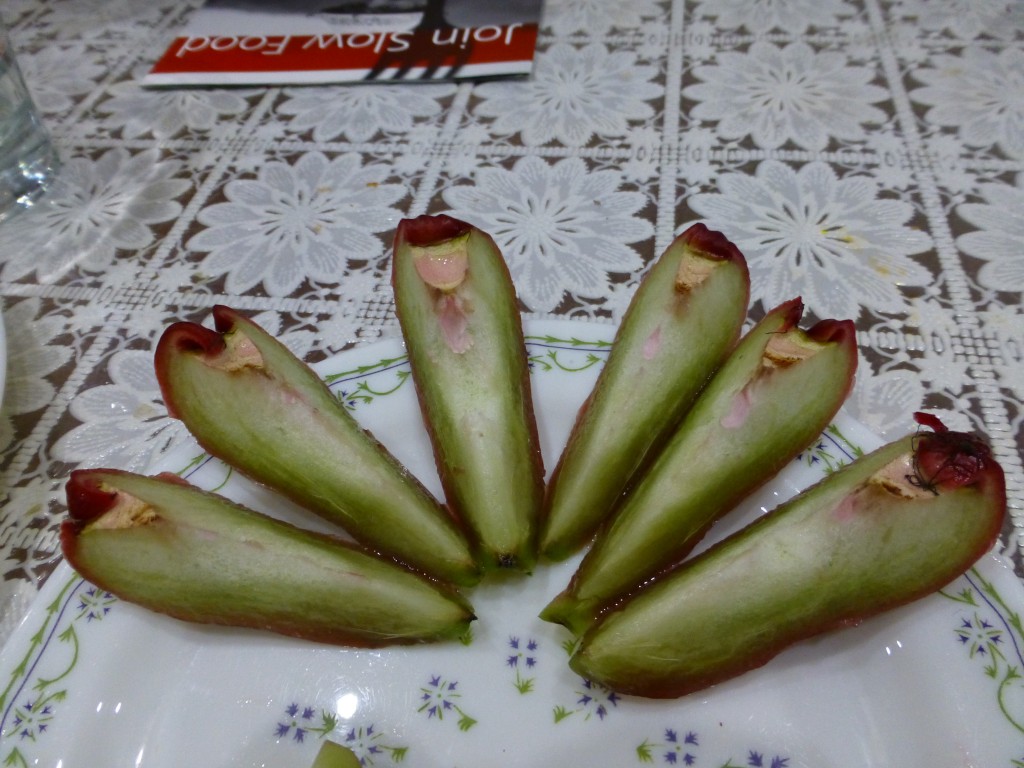 After a couple of minutes she returned with all kinds of ingredients. She started to explain what to do with it, how we needed to cut it or smash it. Every one of us got a chore and the cookingclass at Pickles & Spices had started. 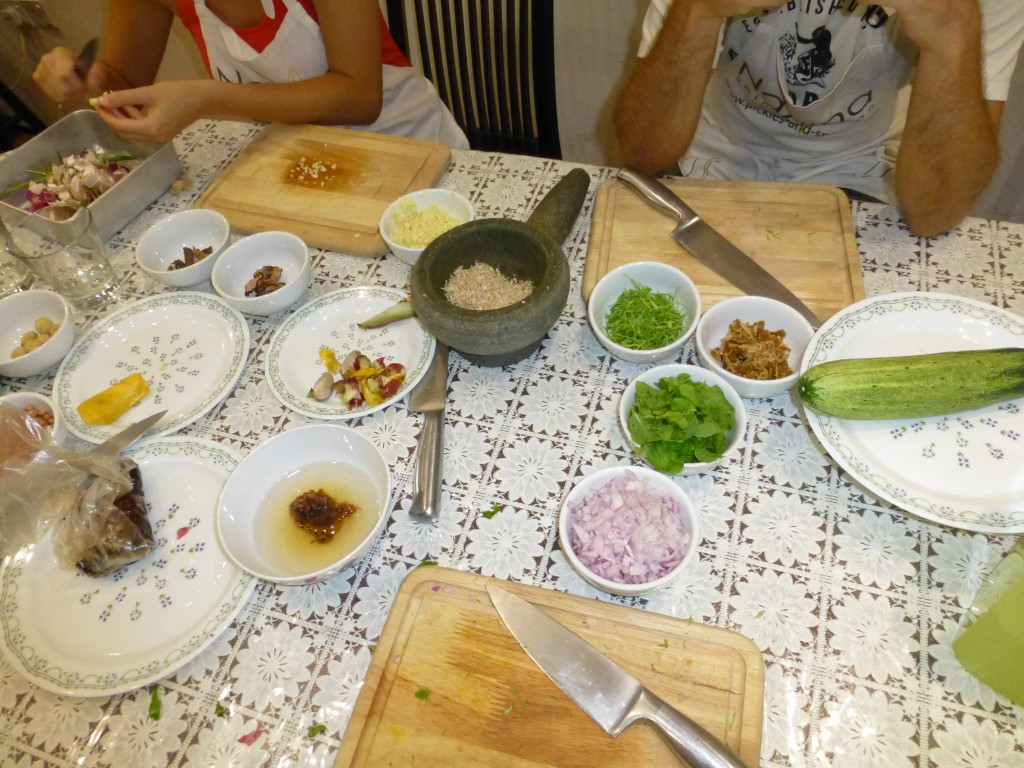 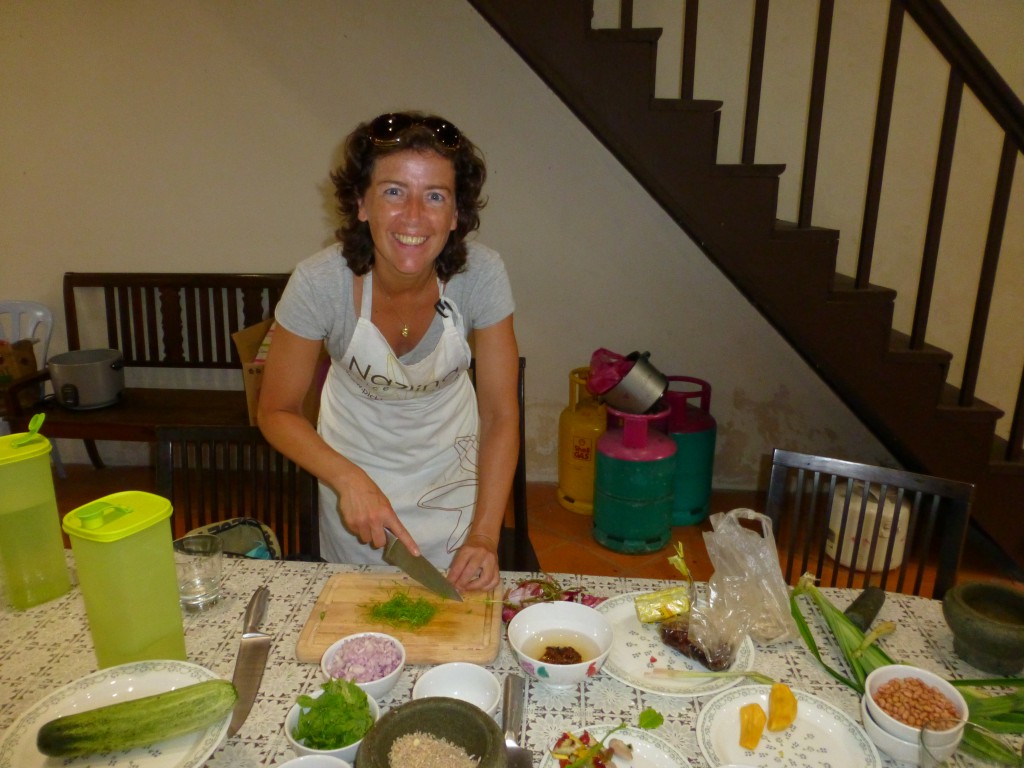 We made a sambal, that one tasted great!! And i made a cocopaste of fresh coco. That took a while before it got darker. I had to smash it and it  needed grinding for a while, all of a sudden it started to turn a darker colour and I saw oil coming out of it. Great to experience! 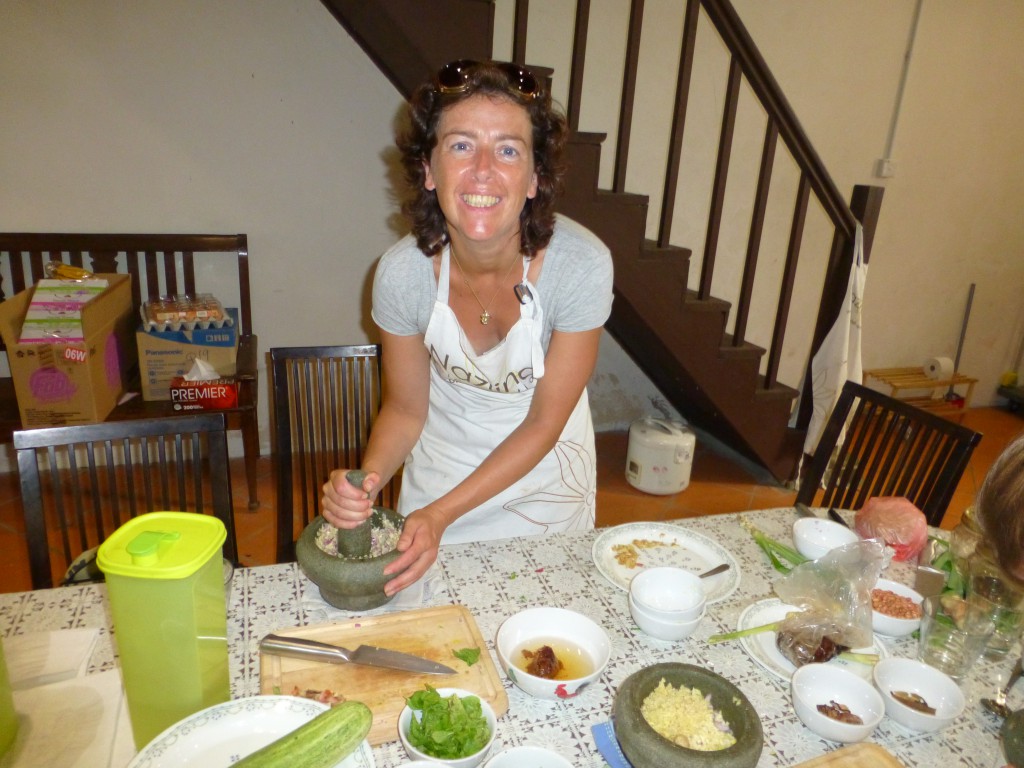 We were coached real well cutting and pasting everything. Afterworth we started cooking in a wok. Everything will be cooked in a wok in Asia, I love that kind of cooking! Some dishes are really quick in cooking but the Beef Rendang took maybe an hour of stirring. We took turns in standing and stirring the Beef Rendang 🙂 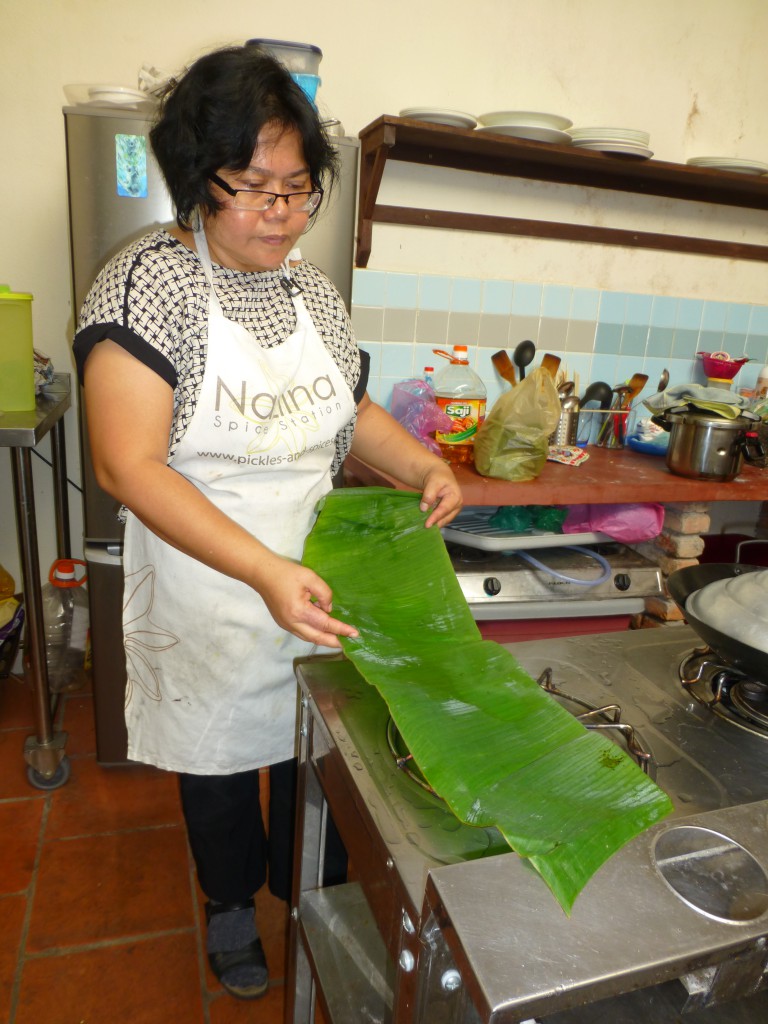 Nazlina, owner of Cookingclass at Pickles & SpicesThe bananaleaf needed to get heated a little above the fire in order to get a nice green colour and so it could be folded around the food. 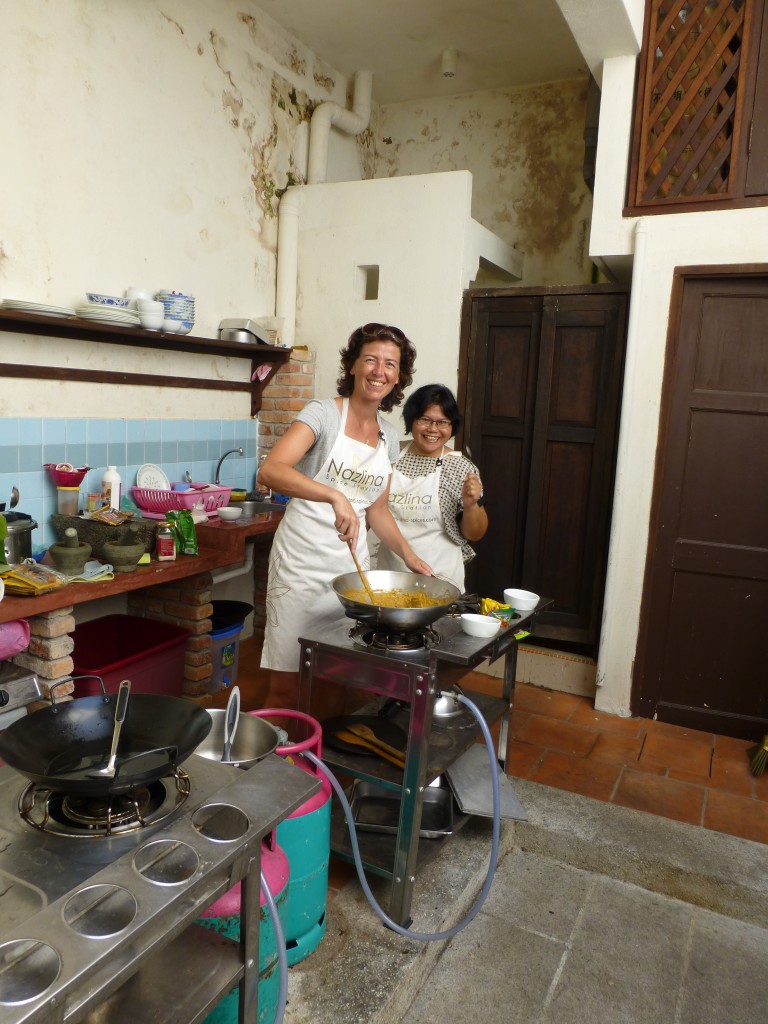 After the cookingclass we eat the Nasi Lemak. This is a typical Malaysian dish and will be folded in the bananaleaf. In there will be a portion of rice and on top of that you put some dried anchovis, some peanuts, slices of cucumber, pieces of cooked egg and the homemade sambal. You fold the bananaleaf in a certain way so it will form a piramide on your plate. It looked so simple…but when you try it yourself… We eat this together with the Beef Rendang, it was a great combination and also a tradetional one! 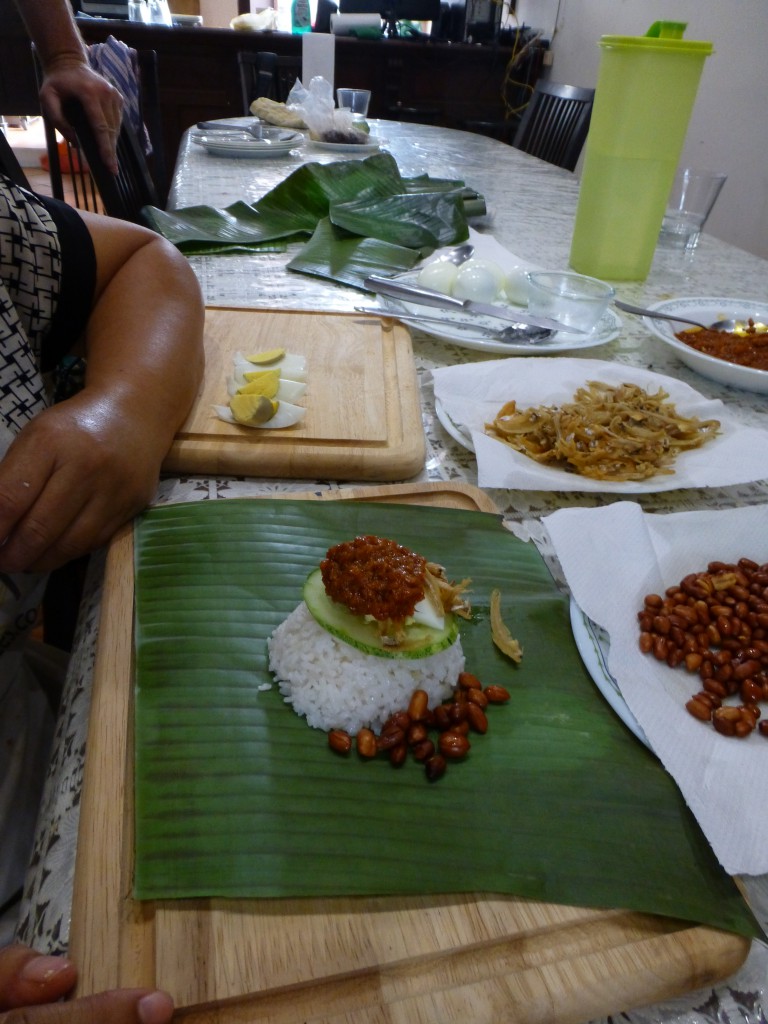 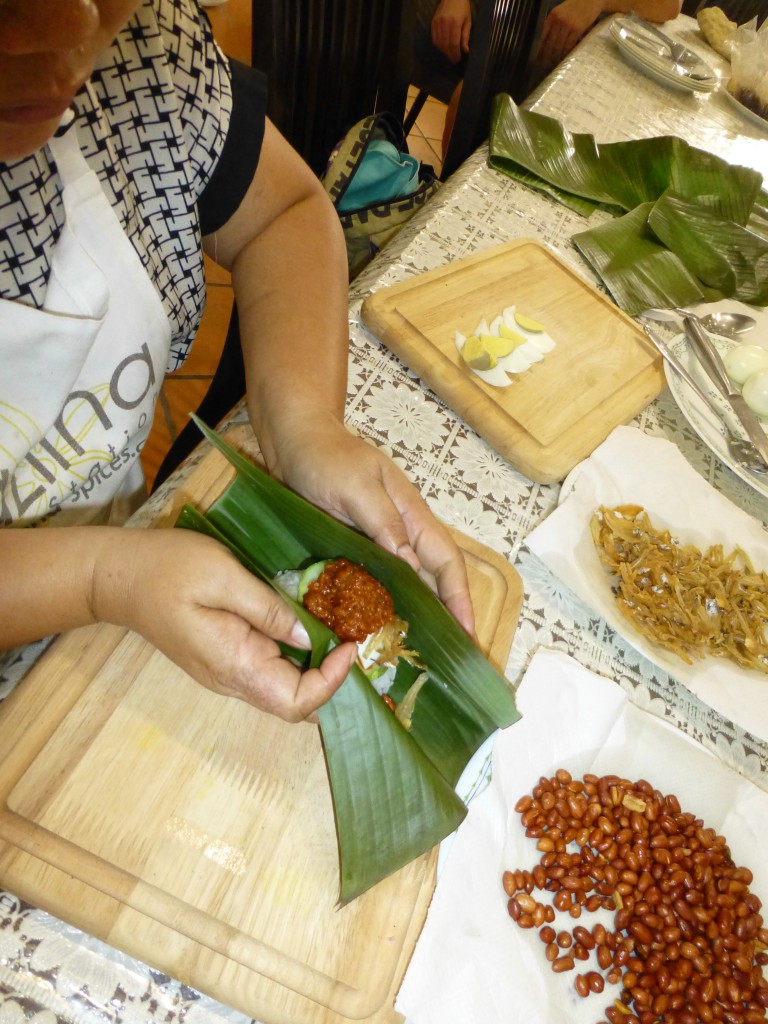 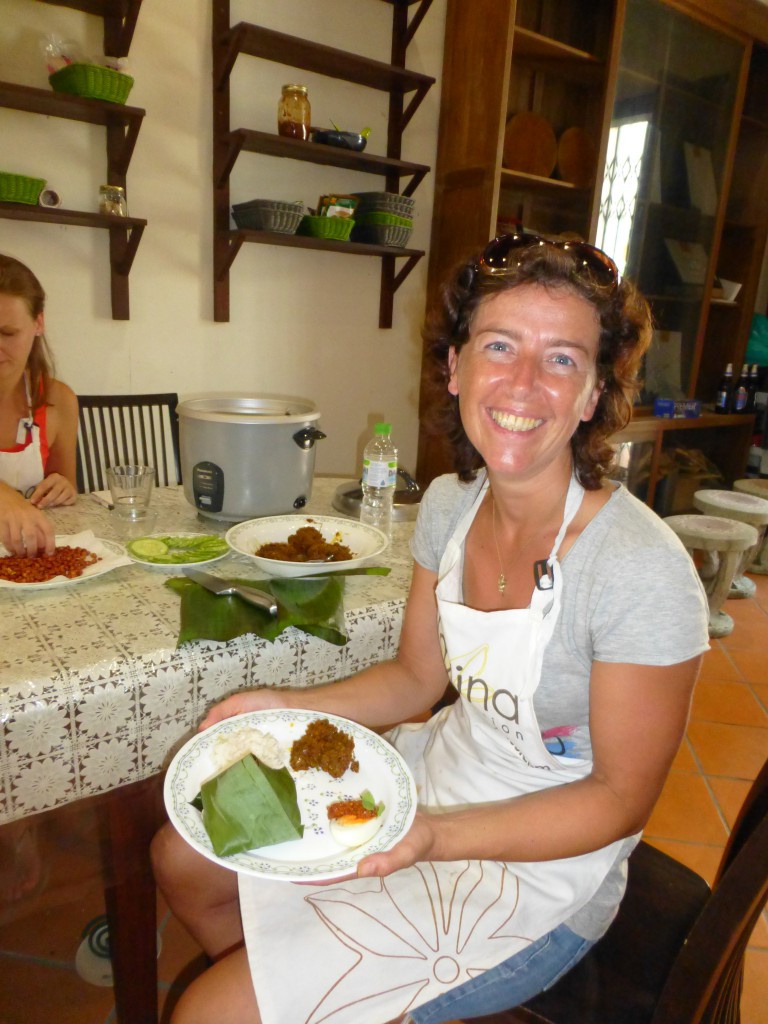 There was this Dutch guy staying in Penang and helping Nazlina so I stayed for a while talking to him. Always nice to talk in your own language while enjoying the great food which you even made yourself! 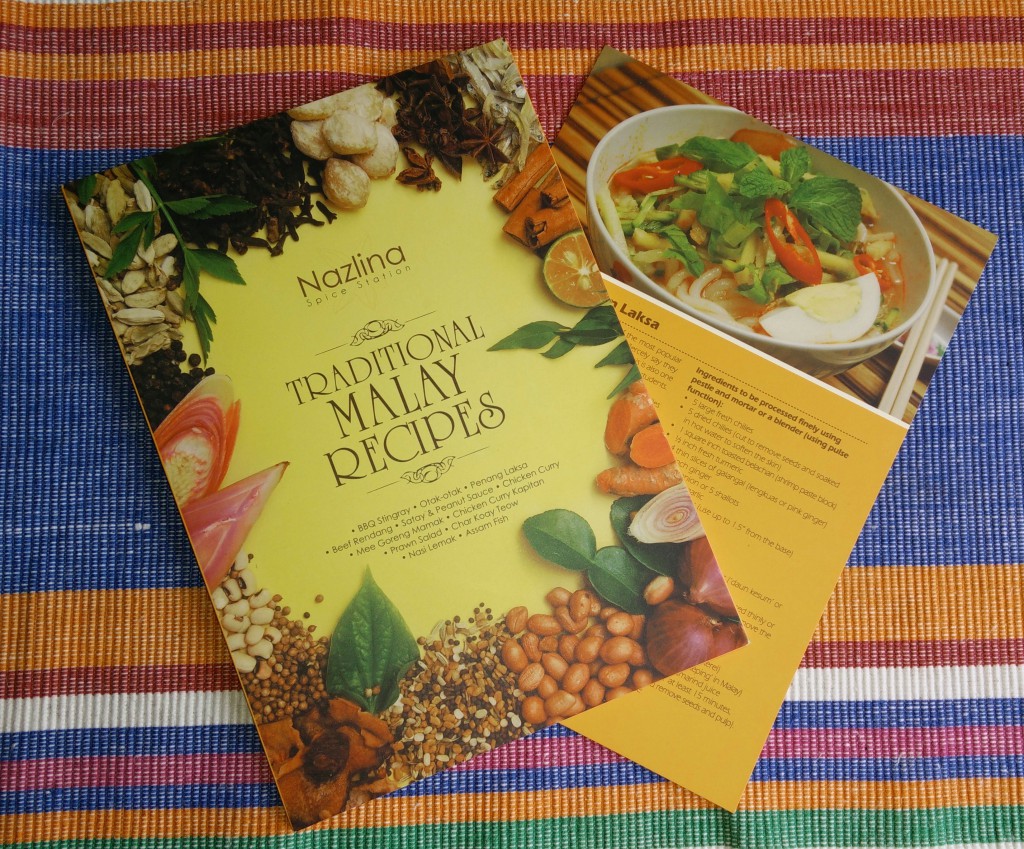 Taking the Cookingclass at Pickles & Spices

When I left I bought some recipecharts from Nazlina, she had them made into a nice booklet so it was easy to take with in my backpack 🙂 The recipes we made ourself I got in the mail later on!!

For more information about Nazlina and her cookingclass click here

Or go on this adventure!!