In Jordan, the dominant religion is Muslim; I hear the prayer call of the muezzin several times a day. Nevertheless, there are also many Christians, so you can see quite a few churches. The churches of Madaba are, I think, more present than in other places of Jordan. That is why I have written a complete blog about the churches of Madaba and also about the place where Jesus was baptised by John the Baptist: Bethany beyond the Jordan. This is a must see if you are in or near Madaba.

Madaba is a town some 30 km from Amman. With over 82,000 inhabitants, it is the 9th largest city in Jordan. So it would be quite doable for a day trip from Amman. The city has about 60,000 inhabitants and is a mix of cultures. The city is also known for its well-preserved and ancient mosaics.

My stay in Madaba

I had booked my hotel at Tell Madaba, a family-run guesthouse in their own house. I have seen this before, people who extend their own house by building another floor and turn it into a hotel. And I really think it is great to stay at a homestay. So you are just in a local neighbourhood and you are staying in people’s homes, as it were. In Jerash, too, I stayed with a family. The lady of the house first offered me a cup of tea and then we started talking.

I told her what I had planned and she said the best route for tomorrow would be Mt Nebo, Bethany beyond the Jordan and then the Dead Sea. Absolutely fine and then I will come back to Tell Madaba to stay another night.

The Churches of Madaba and Bethany Beyond the Jordan – Jordan

After putting my bags in my room, I went looking for the churches of Madaba. The first church was about 10 minutes walk from Tell Madaba and when I was on my way there I realised I had become very hungry. So I started looking for a nice place for lunch. I soon found one at Haret Jdoudna where I ordered grilled aubergine with yoghurt and herbs and of course some delicious fresh bread. 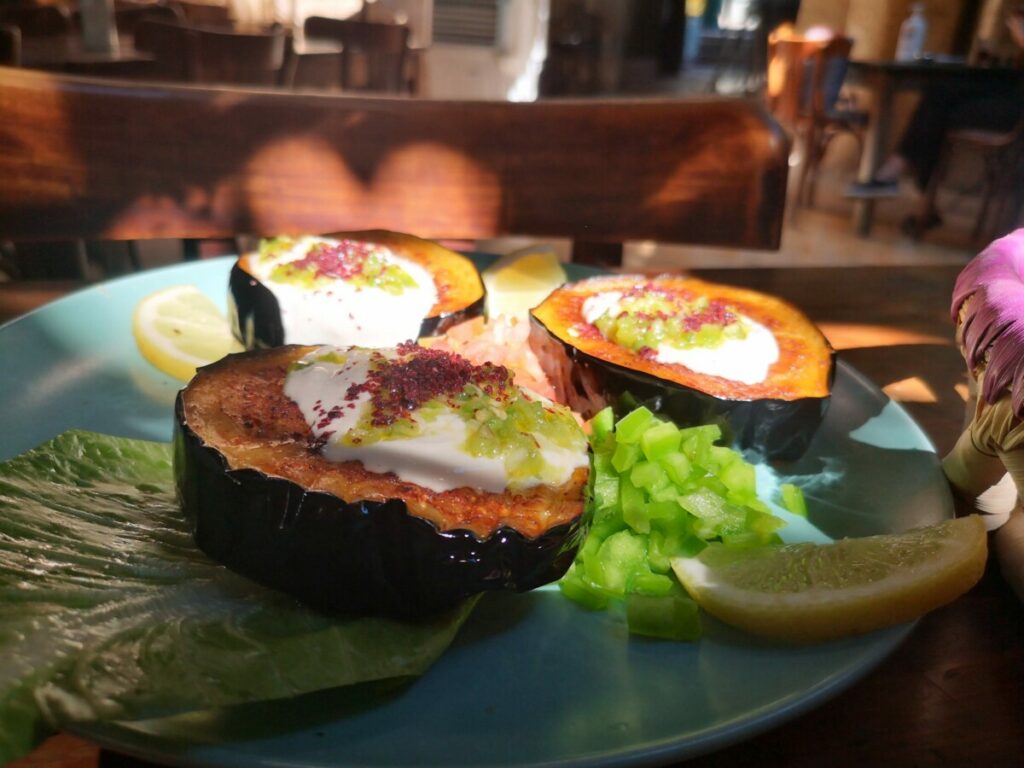 I then walked on to St George’s Church where they have the oldest and best preserved mosaics. The church itself was not one of the most beautiful, I must say. It did radiate something because it was so old. There were mosaics everywhere, I guess replicated. And a part of the church was closed off because of the old mosaic floor. There was still some colour in it and I can imagine that in the good old days this must have been a great image. 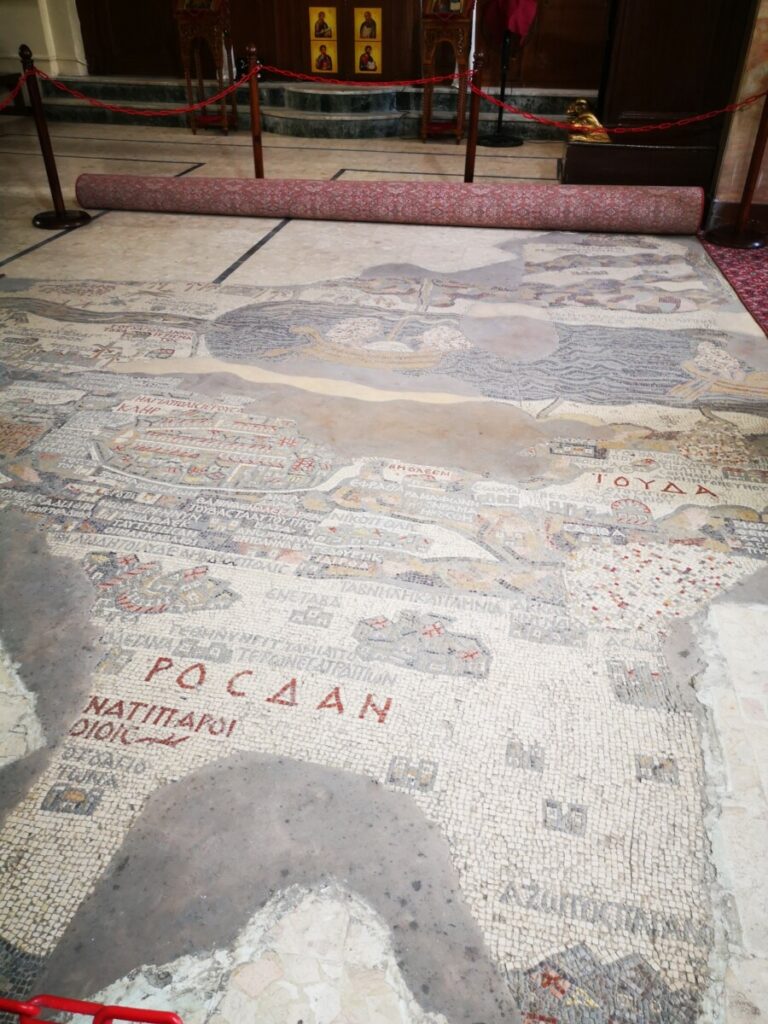 I would like to have a nice mosaic floor in my house right now!
In the bathroom or something? How cool would that be?

To the right of the back of the church you can go to a small room downstairs, where a lot of old paintings are still hanging. It is a dark room so as not to affect the colours. Most of them still look quite good, I understood they were very old already. I didn’t quite get it from the guide in another group 🙂 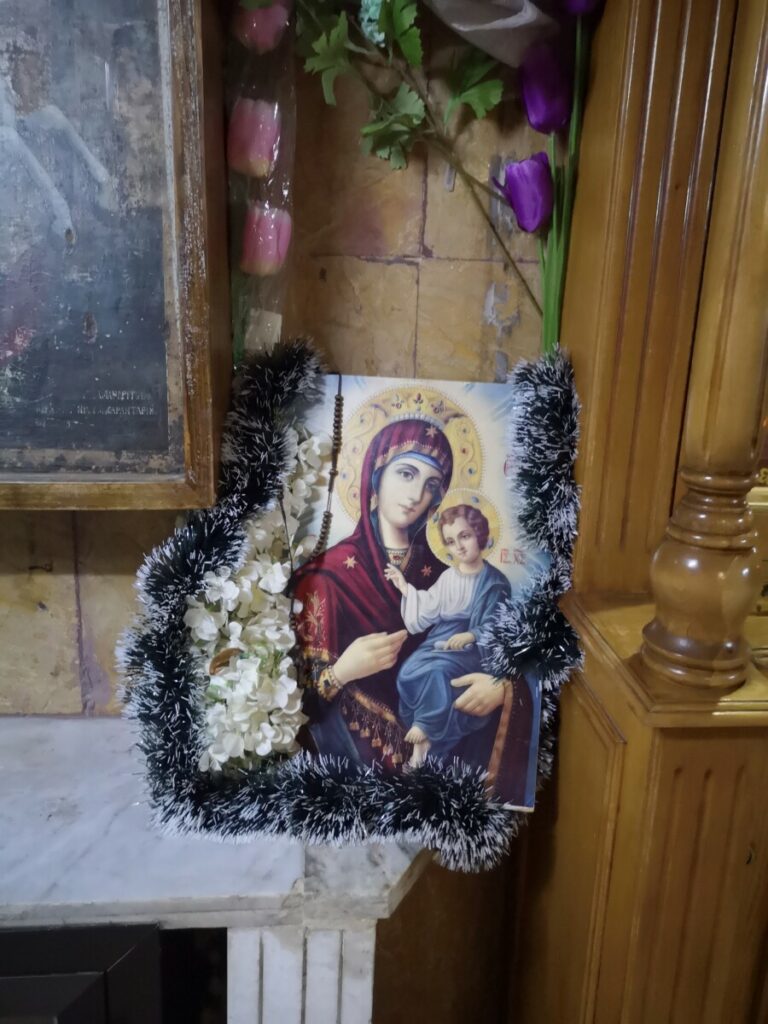 Next to the church on the right is a school. In the building on the left you can buy a ticket to visit this church.

Church of the Beheading of John the Baptist

I entered the church first and was told that I could enter the bell tower. The church itself was nice but not very special I thought. To the right of the altar I found the door that would lead me to the top. I saw a sign saying please don’t ring the bells… strange I thought. In the corridor I did see the thick ropes of the church bells, but I wouldn’t dare to pull them just yet. 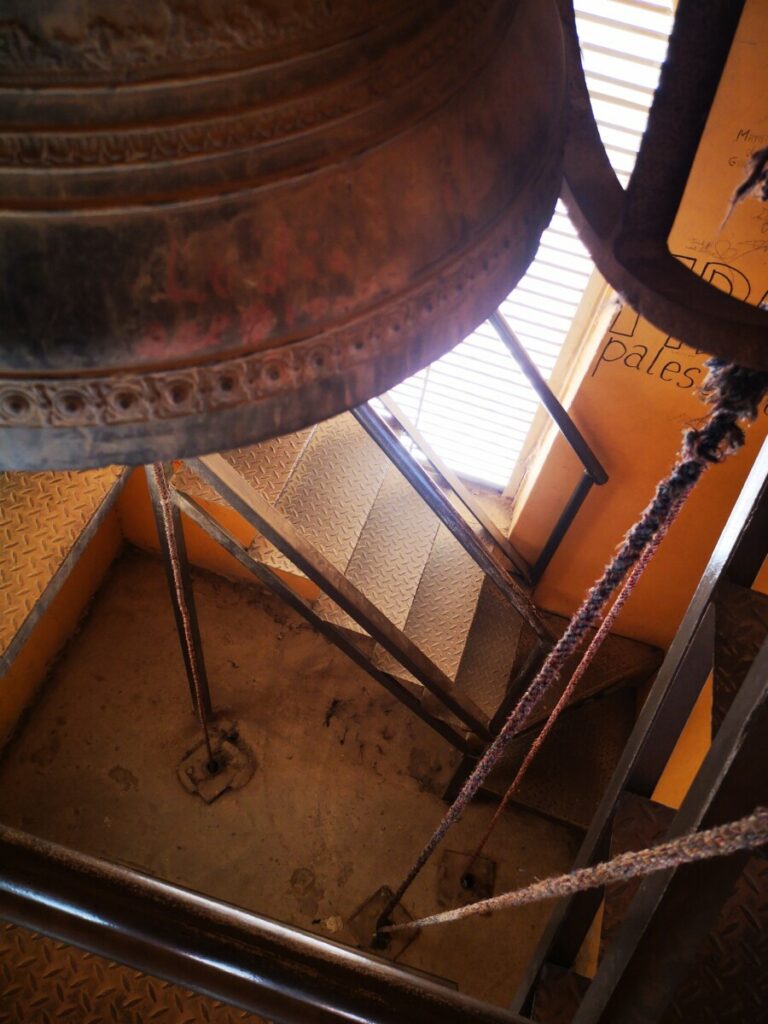 When I walked further and came to the stairs, I began to understand what they meant. We passed very close to the ropes and I had to make an effort not to touch them. When we were almost at the top, I had to make even more of an effort and be careful not to touch even the bells. I can imagine that this sometimes goes wrong and that a bell is accidentally rung, haha!

I managed to get to the top without ringing the bell and when I got there, there was a wide and expansive view of the city with the muezzin’s prayer call in the background.

The churches of Madaba – Jordan 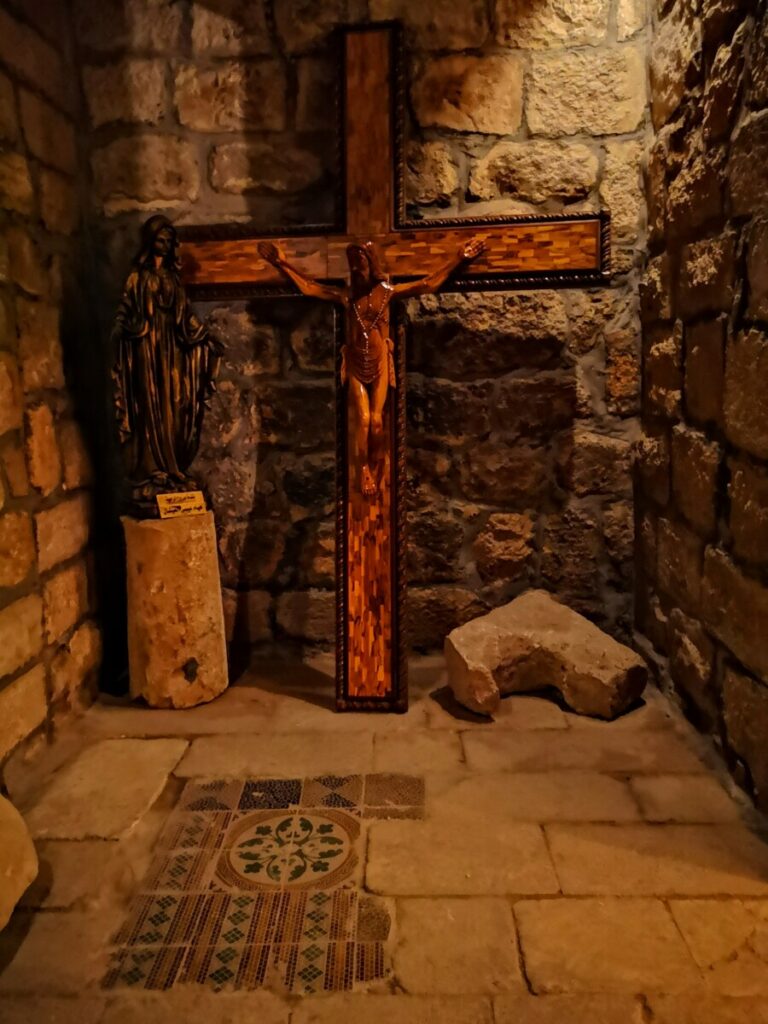 When I was back downstairs, the same man pointed out that I could also go into the cellars. A door to the right of the church led me down. I walked through a number of rooms, low rooms with arches. In one room, there was a large statue of Mary with a large cross next to it, with Jesus hanging on it. A little further on, there was a small passage where it ended abruptly. It seems that they are still busy opening and discovering the cellars under this church. 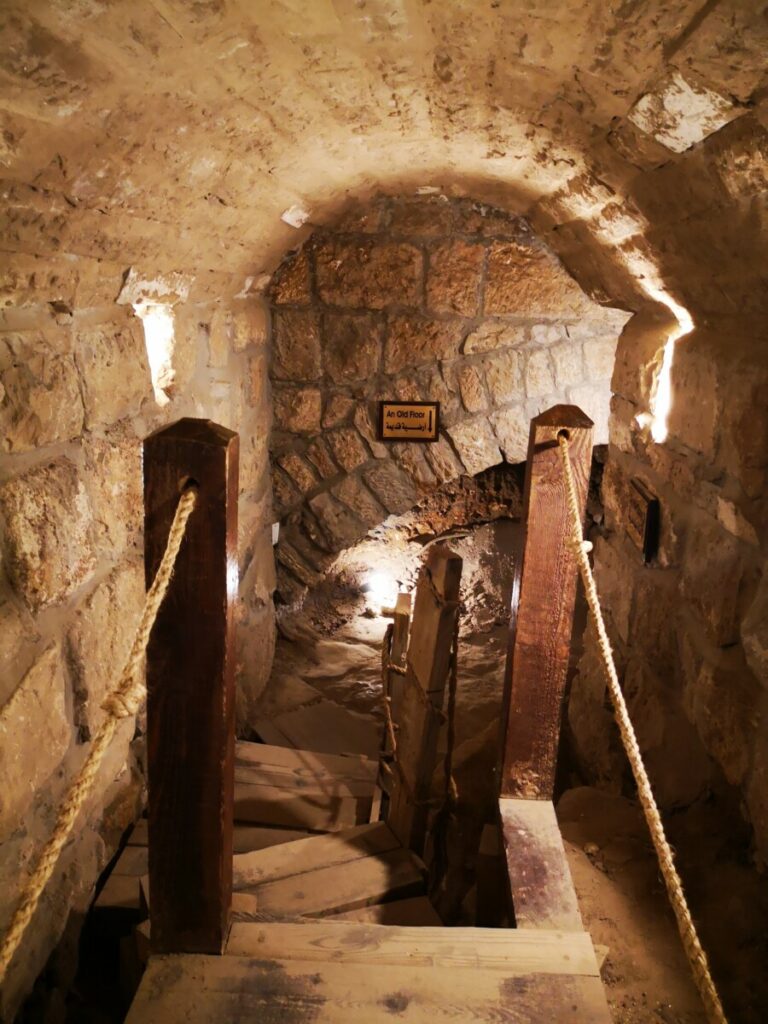 When I walked back the other way, I came into the room where a statue had been made of the head of John the Baptist on a tray. Next to it were the biblical texts from Mathew 14: 1 – 5 and on the other side was a board with verses 6 to 12. I sat for a while in that room. There are several chairs and so you are also invited to spend some time there. 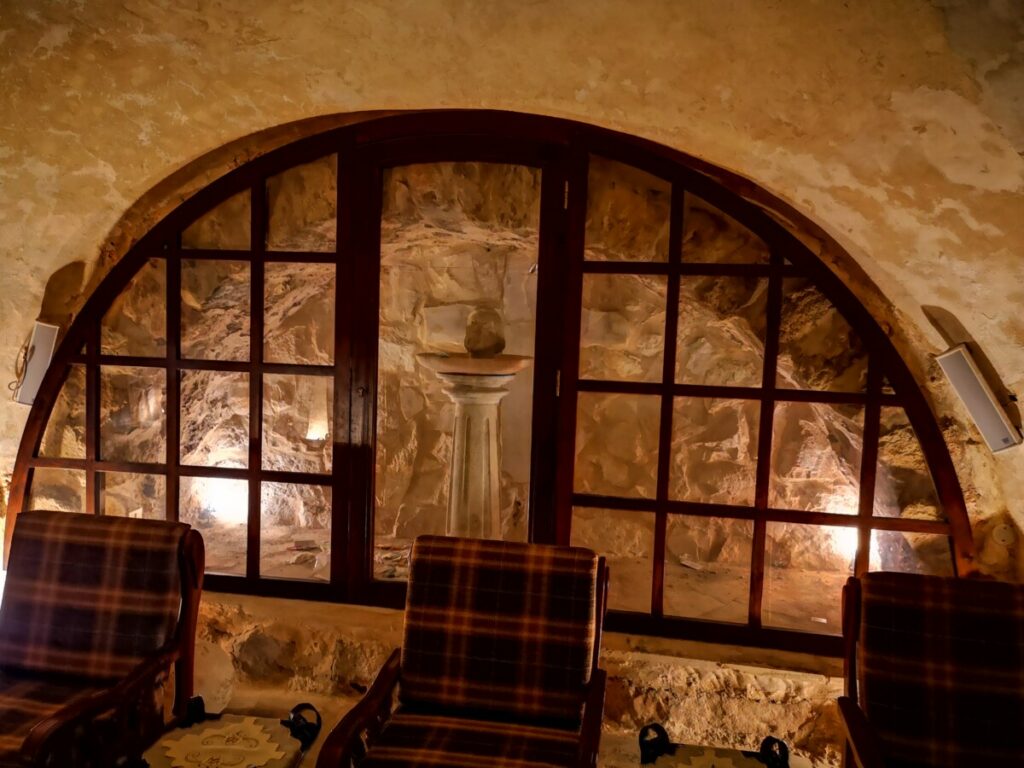 Bethany beyond the Jordan (Al-Maghtas)

Having seen where John the Baptist was beheaded, I had to see where he baptised Jesus. The story goes, of course, that he baptised many people in his life. He proclaimed the doctrine of God and in doing so he decided to baptise people.

Al-Maghtas or also called Bethany beyond the Jordan is 20 km away from the Dead Sea. A visit from one of the resorts there is easily done if you are staying there. From Madaba it is about 45 km and I understood it is on the way to Mt. Nebo so I will take it in the morning. The mountain from where Moses saw the Promised Land. 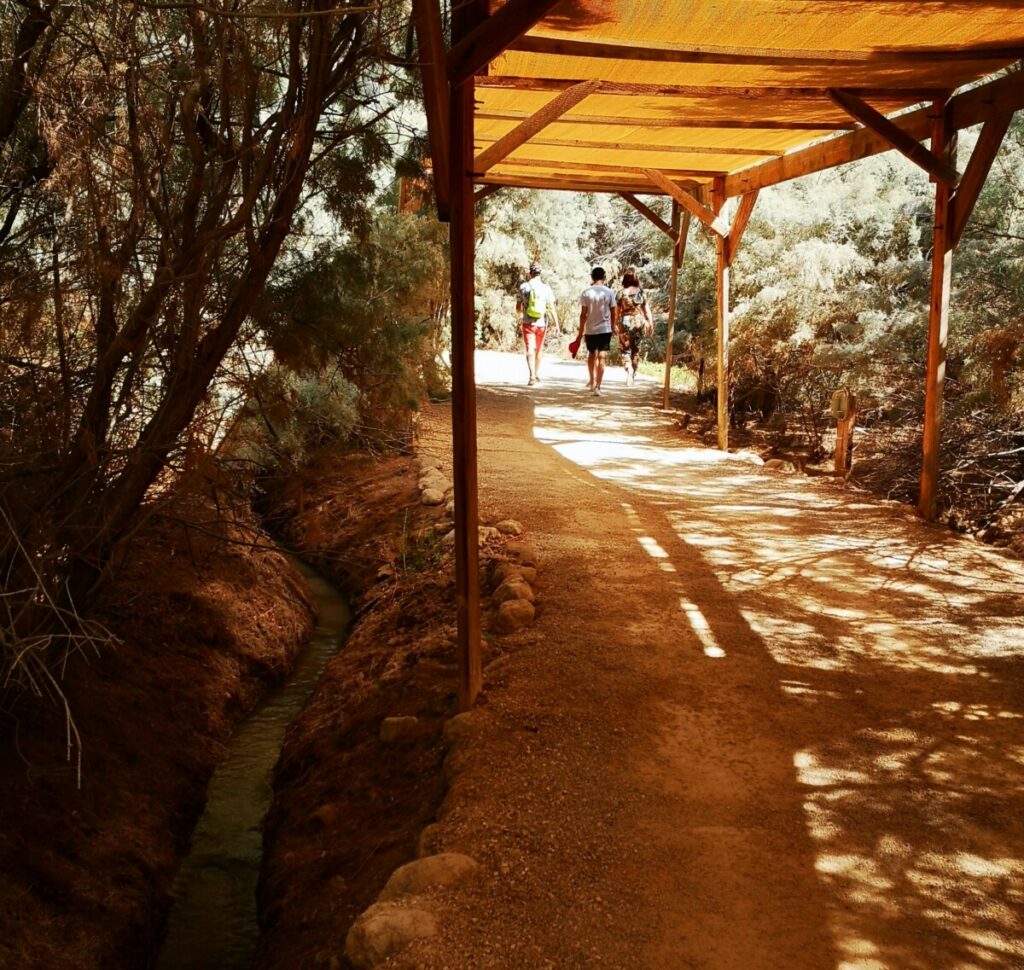 Besides the churches of Madaba, do not miss this site

When I arrived at the place where I could buy a ticket for the baptismal place of Jesus, it turned out that you cannot drive there yourself. You buy a ticket and wait for the bus, a guided shuttle bus, which drives every half hour. So you never have to wait long. There is a toilet and you can buy something to drink or nibble. We drove with two shuttle busses in that direction, it is a 10 minutes drive and then we came to a tourist shop and the entrance to the baptismal place. A path, covered, first took us past the Orthodox museum and then through the area towards a small stream.

I got the feeling that this little stream could well have come from the place where Moses struck the well, a little before Mount Nebo. We walked up the small stream and at a certain point we came to a clearing. That is where the actual place of the baptism of Jesus would have taken place. They have rebuilt it with 4 pillars and in between there is some water. It is not much water, but the guide told us, in former times there was much more water.

Behind it was a wooden building that was a very old church. When we walked there a little later, it turned out there was also a mosaic floor. A few pieces were still visible, most of them had been washed away by earthquakes, the guide told us.

The baptismal place of Jesus is situated between olive trees and other dusty trees. It is hot and dry and therefore very dusty. You can imagine so little about it. There are movements that deny that it happened here, I read, they say that it happened upstream on the river Jordan. The guide told me that it was unique that there were fish swimming in the river up to this point and nothing else. According to him, that was a sign that this was a special place.

Bethany beyond the Jordan – Religious site + Churches of Madaba As we walked on, we came to a church, built in 2003, and then to the Jordan River. Here we could go into the water, or touch it, as long as we did not cross over, because then we would be in Israel. This side was a lot bigger. A bit more space to enter the river and it looked tidier. A couple from our group went into the water, they went completely under. I shared a video of that on IG in my stories.

It is strange that the whole group is a bit quiet then, impressed by the place and introverted. I also went down the stairs and dipped my hands in the water for a moment, with which I wet my face. Am I religious? Hmm…not really but I am not a denier. I don’t know what is between heaven and earth, so to speak. That there is more I am convinced of, but what?

This includes the shuttle, the guide and the visits to the baptism site, the Jordaan and the museum and church.

I really liked staying in Madaba. It is also close to the airport and so as a city to start and end you Jordan trip a good place to stay!

Did you find these places interesting?
Then save or share this blog! 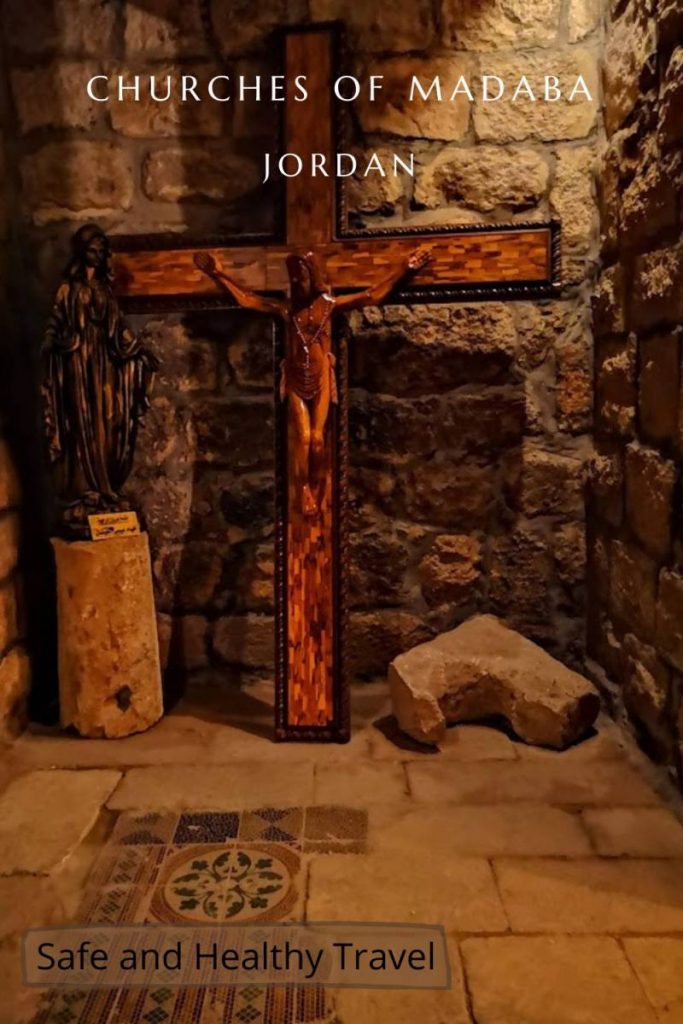 Want to read more about my visit to Jordan?

Ruins of Jerash –  Once a Prosperous Roman City

Or travel in the wonderfully diverse Oman