On top of that hill.. They found a bloodbath on top of Masada. What happened up  there? It was 40 years before Christ when King Herod fled Jerusalem and found a safe haven on top of the mount Masada. In the years after, 31 – 37 BC this got bigger and bigger and eventually a whole village was build on top of…even a palace!

On the mountain Masada where they found a bloodbath

Years after…
The mountain of Masada was surrounded by the Romans when Jew rebels, the Sicarii, settled there after fleeing out of Jerusalem. This was in the year 73 and during the first jew-roman war.  This occupation took 2 to 3 months.  In that period the Roman build a ramp to go up the mountain with an army and a divise to run down the defense wall.  This ramp was build by captured jews, they knew the Sicarii wouldn’t hurt them. When the Romans finally went up and got through the defense wall they only found dead bodies. 960 men, women and children, all dead. They wouldn’t surrender, they wouldn’t get caught.. They would kill themself.. They had made an agreement, a couple of men would kill all others and then they would kill themself. That way nobody would get caught. There were 2 women and 5 children left that hide away and could tell the horrible story … 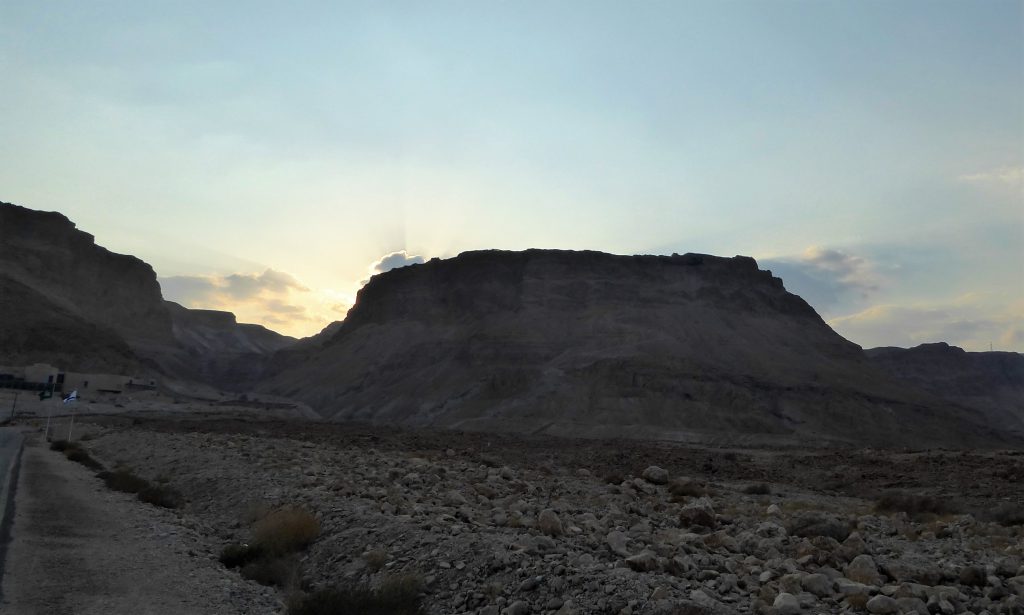 They found a bloodbath – Masada

There are all kind of stories and facts to be found for the archeological and historical backgrounds. The fact remains that they found a bloodbath that took place in those last days…hours… 960 men, women and children. That is huge!!
But in this day and time something totally different goes on there!!
From Jerusalem trips are organized on a daily bases to go and see the sunrise at Masada early morning. They leave out of Jerusalem in the middle of the night. Climb the Masada before sunrise, enjoy your visit. Go back to Ein Gedi and walk the National Park and after, as a closure, swim in the amazing Dead Sea. All in a day!! 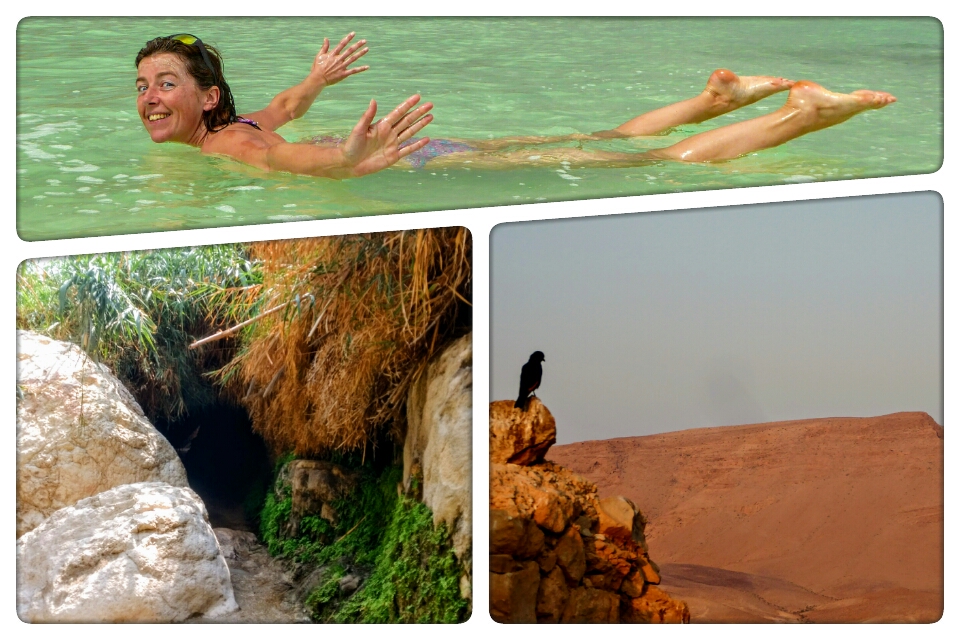 I love to take some more time for everything. Enjoy being in the desert.. I don’t get to stay in the desert that much.. So I booked a hostel near Masada where I stayed for 2 nights. After that first night I made my way up the mountain Masada to enjoy a great sunrise on top!
I walked up with the American Mike who joined me for dinner that night before. He didn’t like to be alone and we had a great conversation. At 5.40 hrs in the morning, totally dark still, we were ready to start the walk  or climb rather up the great mountain. At the entrance was a busload of people already standing to pay the entrance fee. The buses were parked at that parkinglot with a view over the desert and in the distance the Dead Sea. A couple of minutes later we started to walk up. 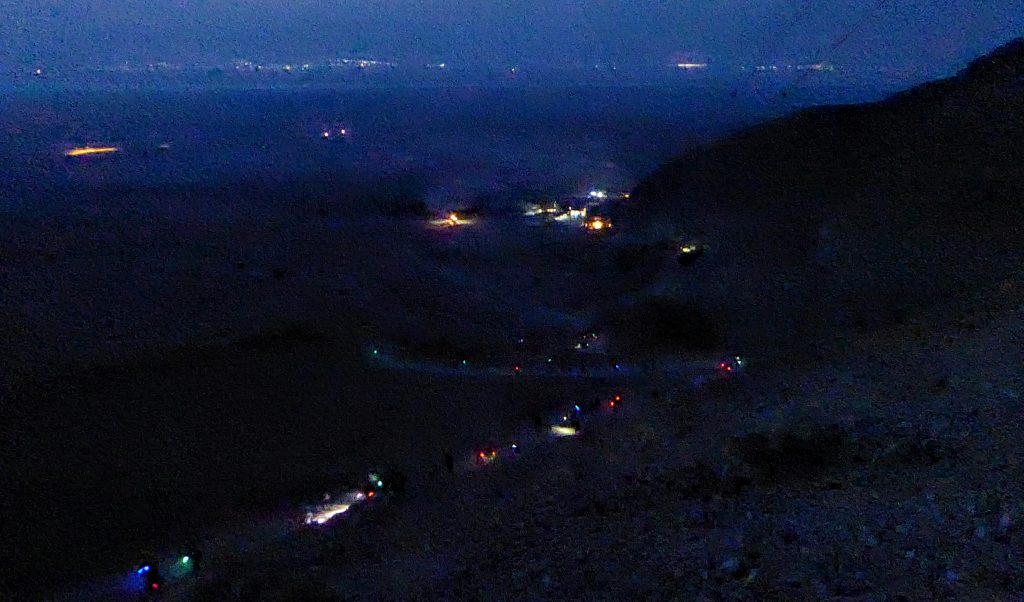 Looking back I saw a long line of lights… 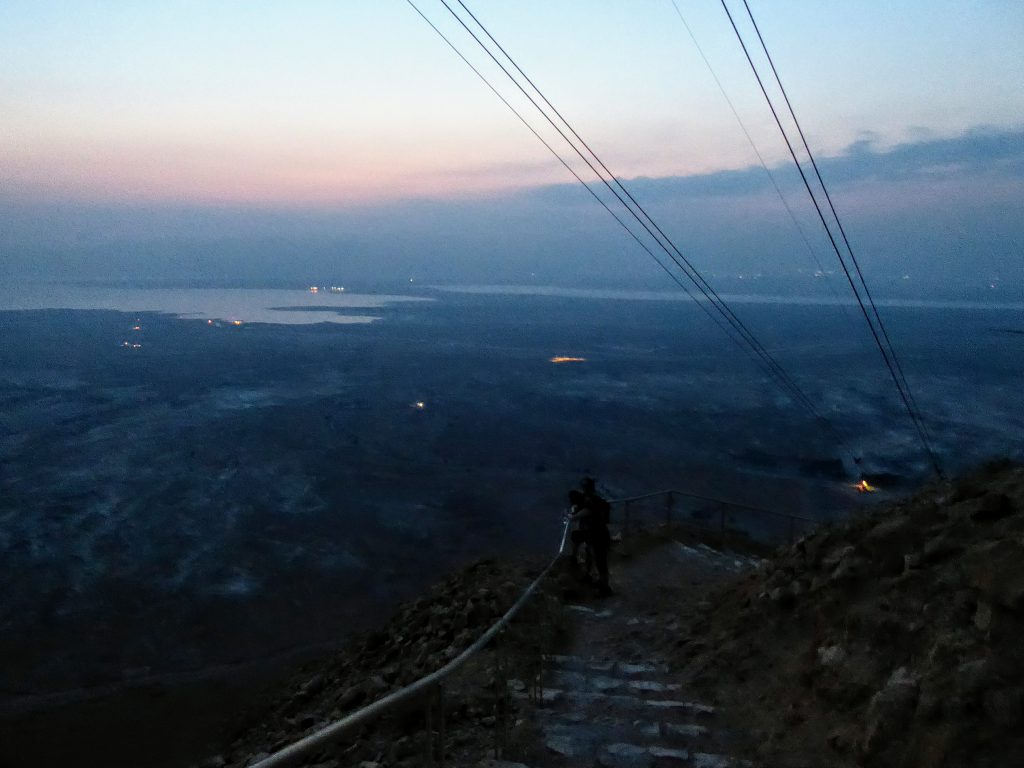 Going up to that place….

Where they found a bloodbath in the year of 73 AD

Mike and I were walking faster then most of the hikers. We had a good pace and were climbing fast. We didn’t have a light and most people did so looking back we left a line of lights behind us 🙂 It was also not good for our eyes as they were getting used to the darkness and you can see everything without using the light.. Your eyes are constantly changing from dark to light. Walking in darkness and getting used to that is so much better I learned while walking that great Camino. That you see so much more while not using your light. And we also walk here to see as much as we can, do we?
Slowly it started to get light and we got higher and higher. Also the temperature got higher.. It was nice and cold in the beginning but walking got me warmer and now the temperature.. I took of my jacket and enjoyed the weather.

When we got up it was almost daylight so we were in time to see that sun rising. It got windy and soon I was chilly again. I was happy with the extra windjacket I took with me. We were waiting for that sunrise but it didn’t seem to be showing..we thought were had bad luck and started to walk around. It was a bit cloudy and the  mountains on the Jordan side of the Dead Sea weren’t even showing..
So we started to walk and explore the top side of Masada. It was a whole village in the old days. There were parts of buildings still left to see. Some had even colours from the paint still on them. How wonderful!! It was so long ago and still visible. The palace was on the right side and a bit lower, as it was hanging on the side of the mountain. From there the ramp, the Roman build, was visible too. Very impressive!! 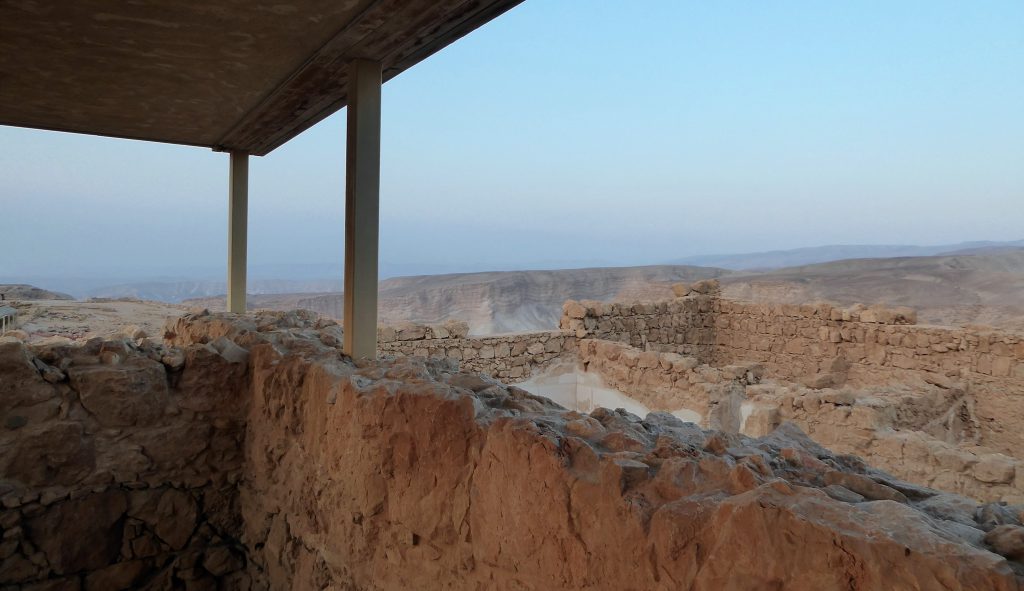 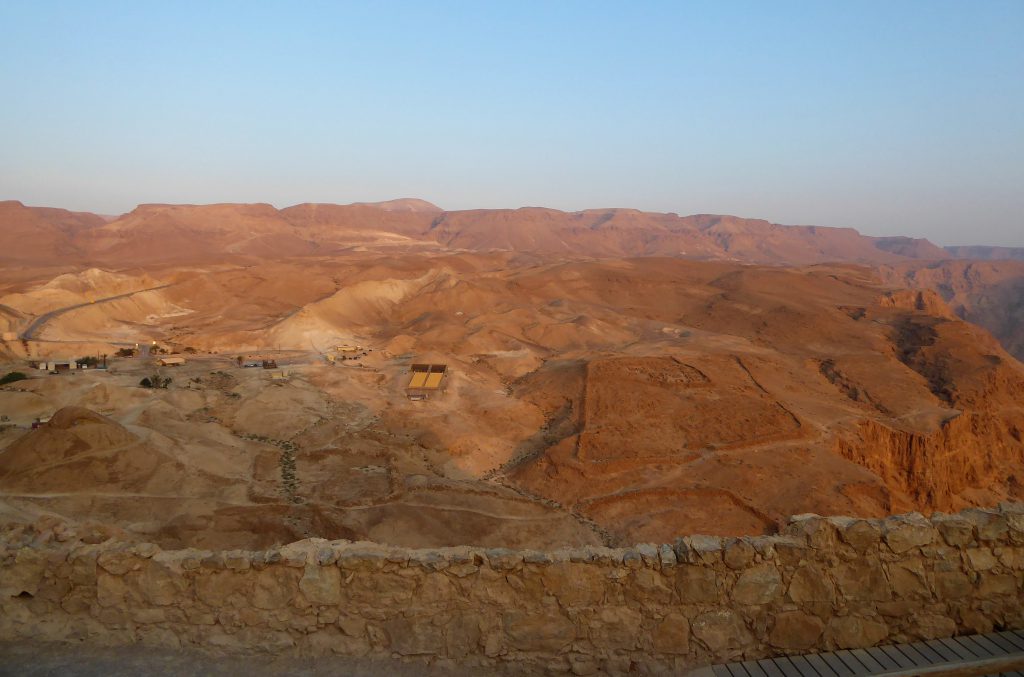 Do you see those lines in the ground? They are the lines of the occcupation of the Romans at that time surrounding the mountain Masada. You’ll see the walls of the camp of the Roman during those months in 73 after AD.

And then we saw the Synagogue.

Bar Mitsvah on the mountain of Masada

Inside this ancient old synagogue we saw a couple of men and boys standing. They were praying.. We heard them from a distance and were drawn to it. When we were standing at the entrance a man came out of the synagogue to explain what we saw. He told about the Bar Mitsvah of the boy who was leading the service that what was going on inside. The boy was doing the whole Bar Mitsvah himself and led the prayers. 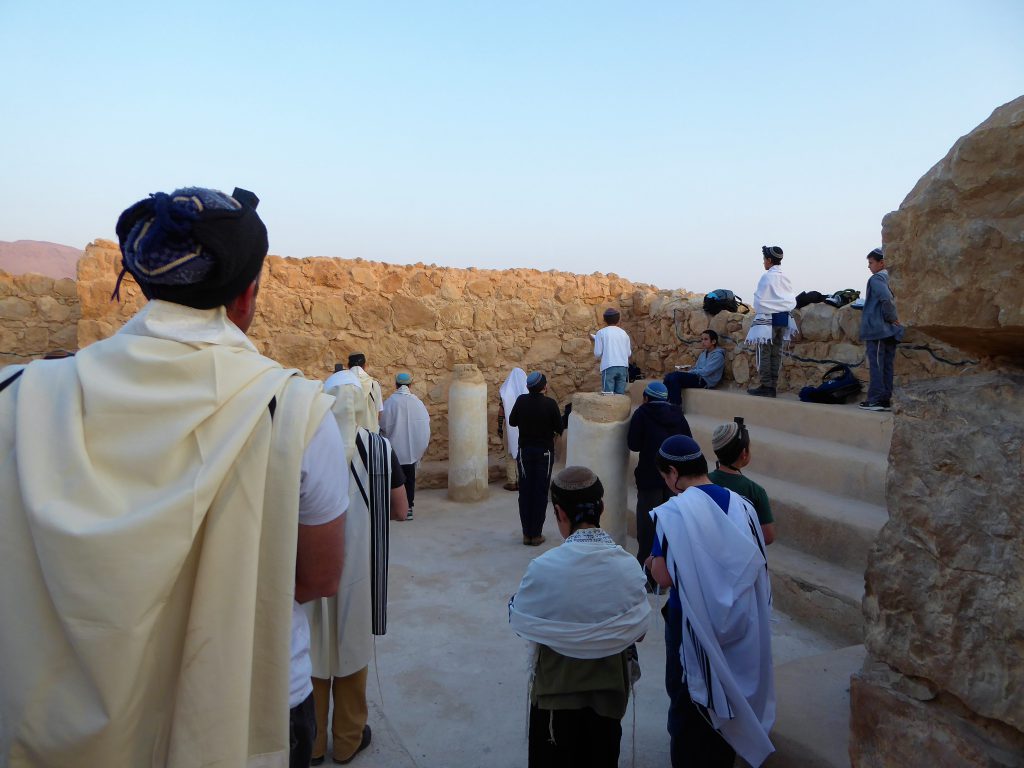 For them is was a special place, doing the Bar Mitsvah on top of mount Masada and during the sunrise too. The man that gave us the explanation had this rope on his arm and he also had this box on this head. I saw this before in Jerusalem and didn’t know the meaning behind it.

He was happy to explain it to me. 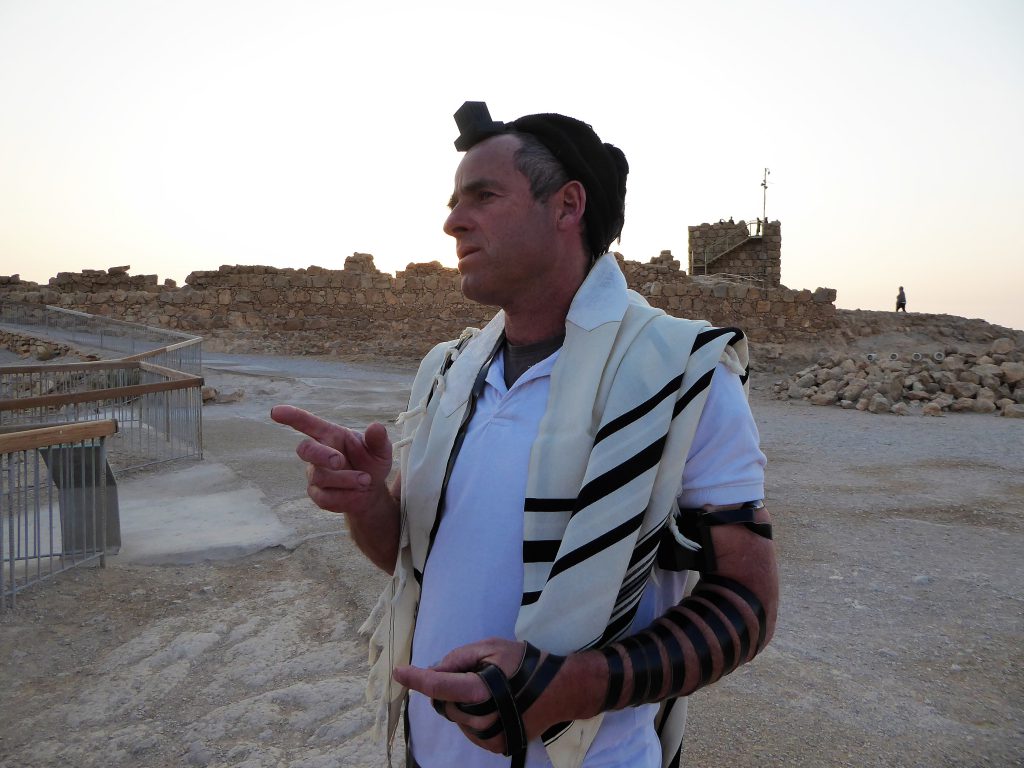 They call it a Tefilin he told. In the box he was carrying on his head were prayers, holy texts from the Thora, the morning prayer. These prayers were warn close to the heart, root of the emotions and close to the head, root of the soul. The leather band was twisted around the arm 7 times. In this manner the leather band looked like the letter SJIN that refers to Sjaddai. And Sjaddai means the almighty God.

Where they found a Bloodbath

They were here for months, all that time they had enough food and water.. Can you imagine that in that time of age? 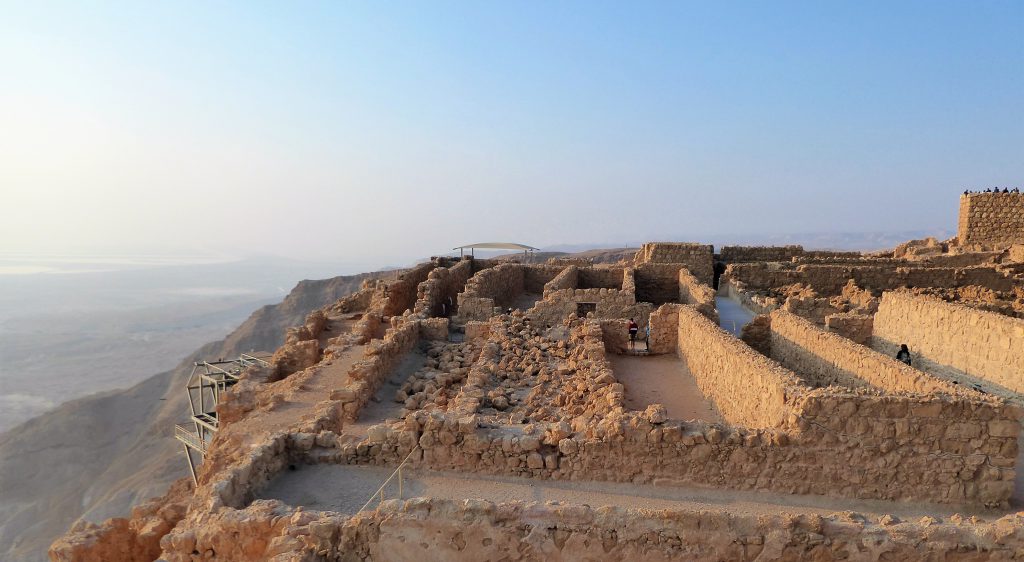 Those long spaces you see are the large storage rooms 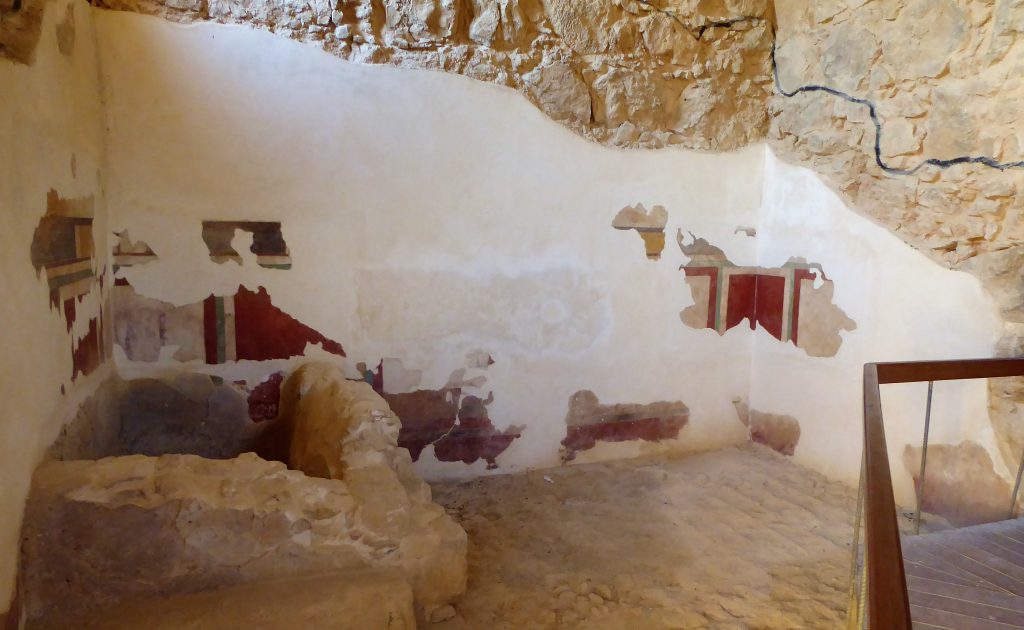 And what about a bath house? Multiple rooms and multiple baths, how great is that? 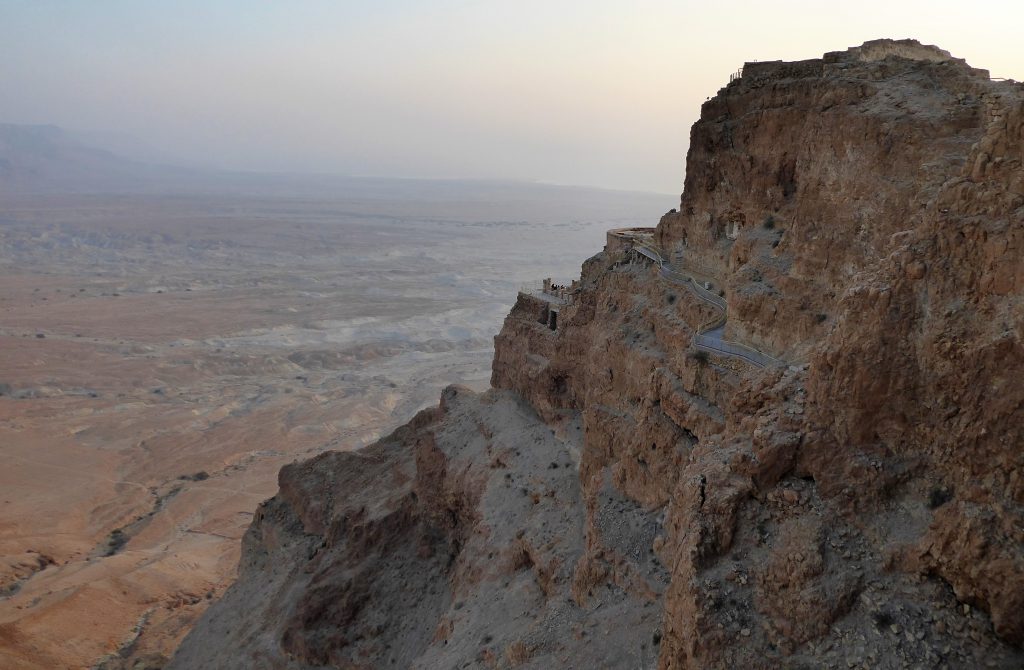 Also the palace was a great and huge building. On the picture above you see the spot, on the side of the mount, where the palace was situated. It is bit lower as the rest of the village and so it was more difficult to reach this part of the town. 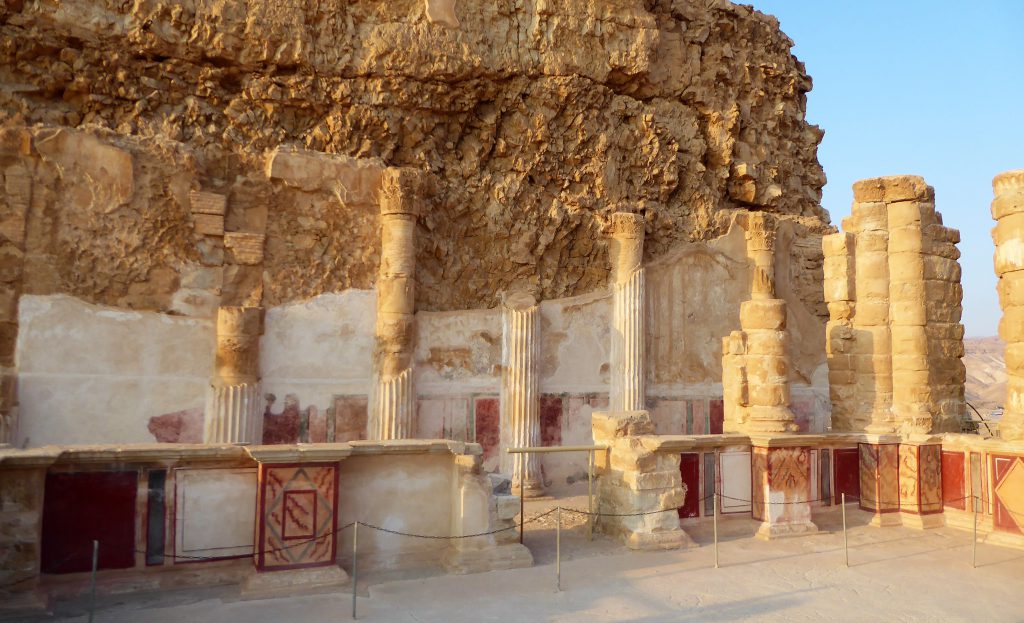 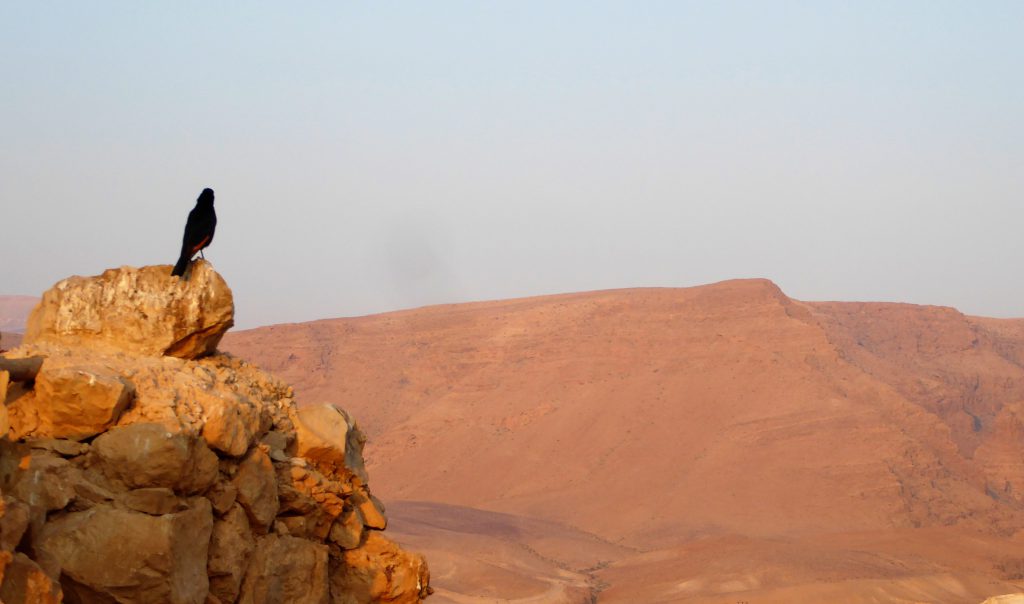 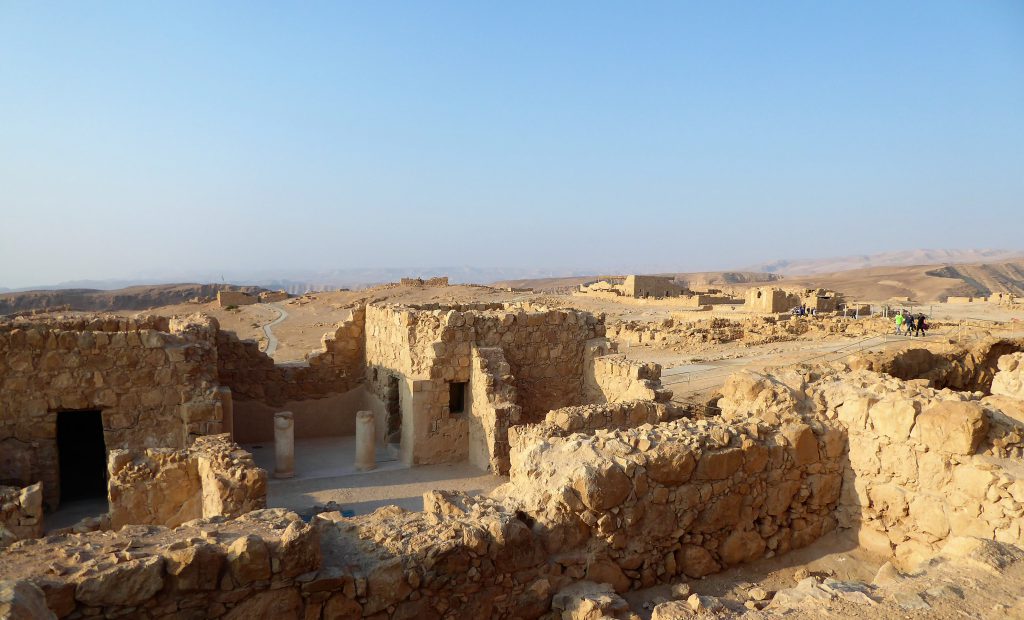 But then it happened!! We got our sunrise!! Behind the mountains of Jordan the sun appeared!! 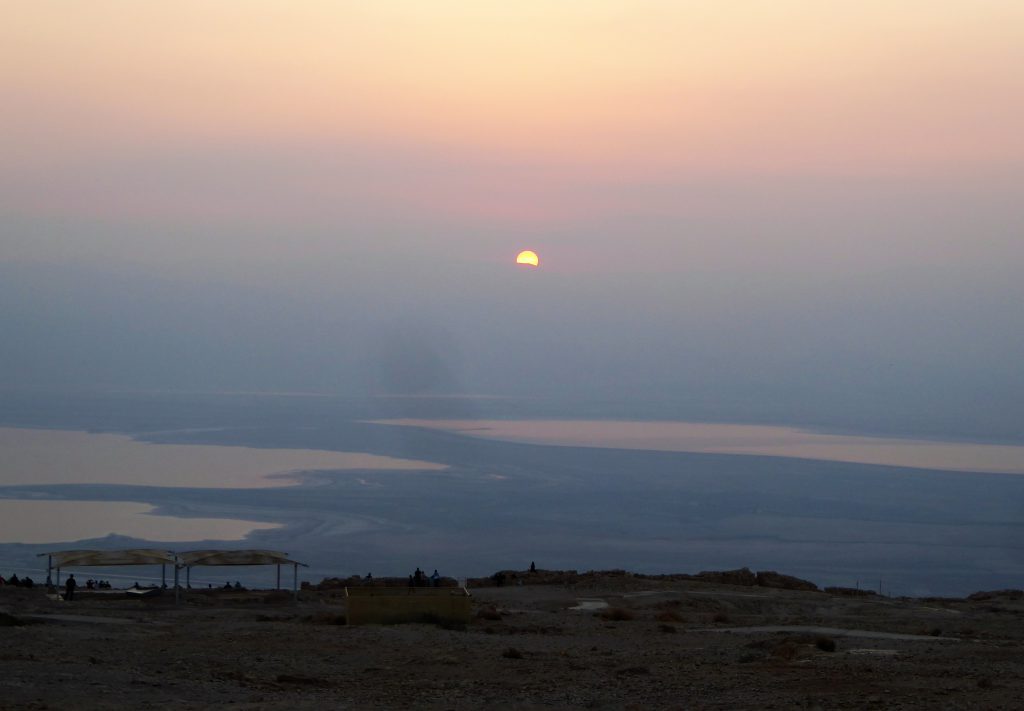 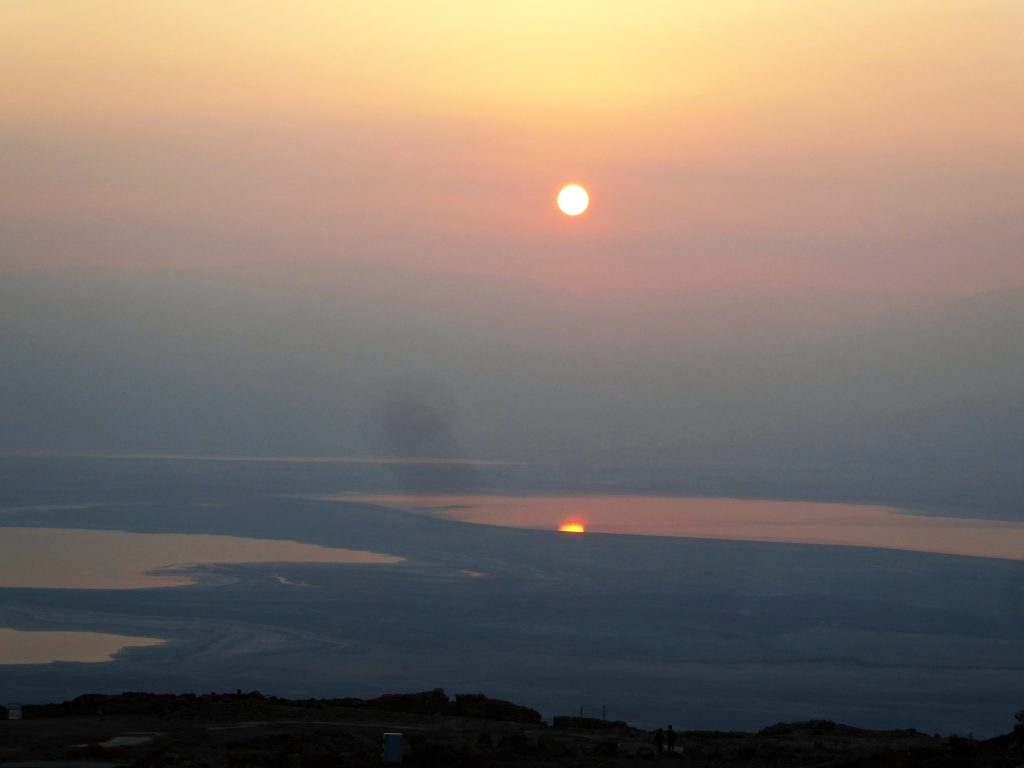 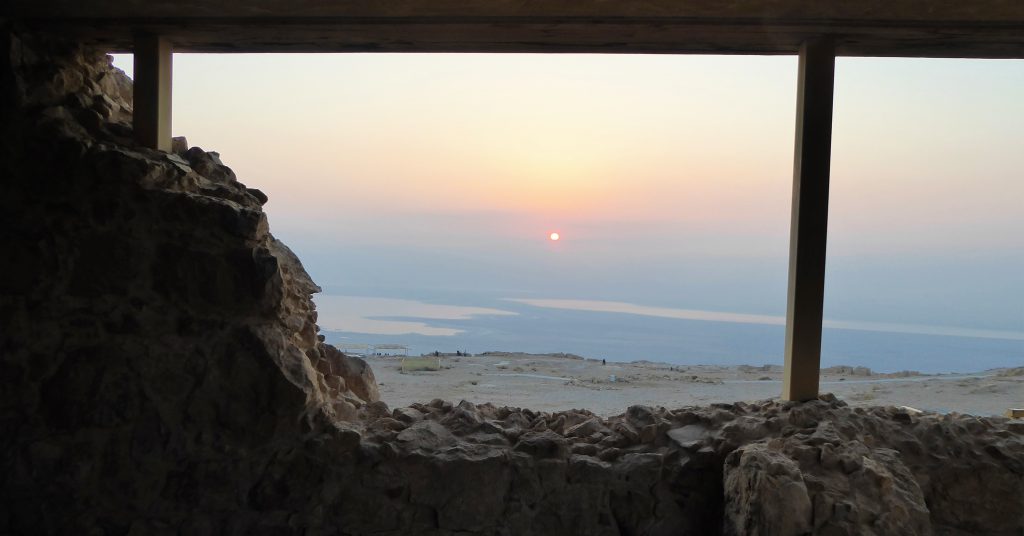 Looking for alternative ways to go up Masada? Check out this Guide on how to Climb Masada!!

Where they Found a Bloodbath – Masada 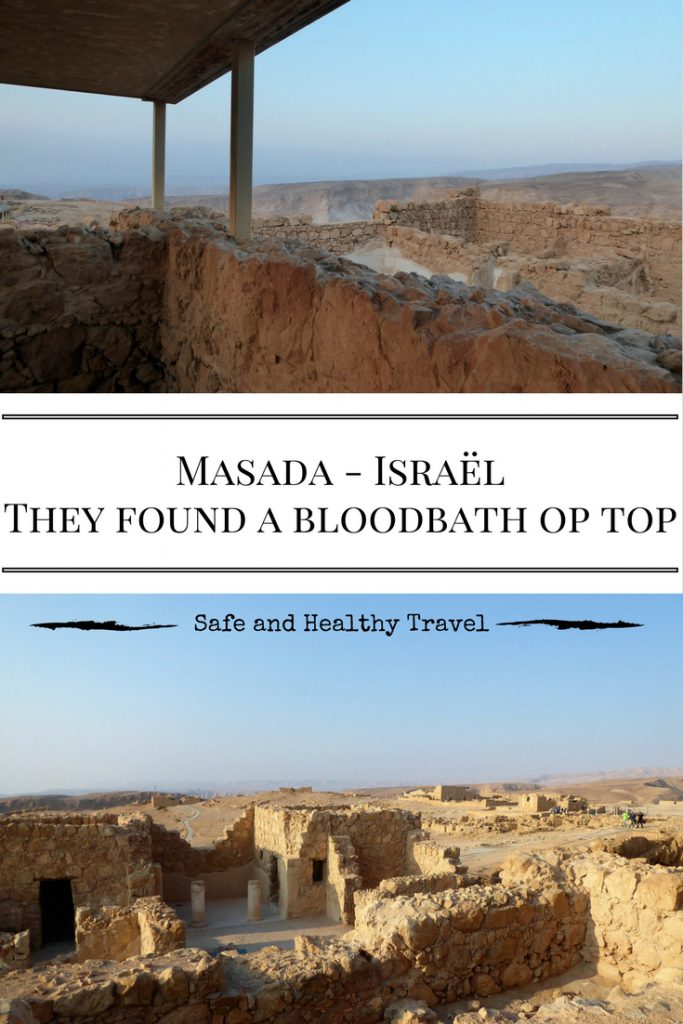 Would you like to read more about my visit to Israel?

Visit the great city of Jerusalem

Hitchhiking on a Shabbath in Israel

Walking the 1000 Steps of Haifa – Israel

Wandering Around the old city of Acre

Did you ever visited the Emirates?