The UNESCO World Heritage Site of Fort Island Pampus is looking for ways to become energy neutral. They want to offer the visitor a lot but do not want to leave an impact on the environment. Totally hip! They stand for giving visitors a fun and educational experience in which you learn about the background of this interesting island, but also that you look further and think beyond your own bounderies.

It is of course hip lately, we are all looking for that unique experience! To that one place where no one was there yet … I have to admit that I sometimes think that we are breaking into it, but I admit: at the same time, I also want a unique experience!

When I was invited by Fort island Pampus to spend a night there, the choice was of course quickly made. Me? Spending the night on an uninhabited island that has an ancient history? Yes, of course I want that !!

I like to embark on an adventure, especially if it is in a place that I don’t know very well yet but that has an interesting ancient history. In The Netherlands everyone knows the sentence Voor Pampus Liggen but most people I ask do not know where it comes from. Of course I didn’t know that either ..

Time to delve into it while staying overnight on Fort Island Pampus!

In the past, before the fortress island was built, there was a natural sand rise where Pampus is now. If the ships, with their cargo, then wanted to sail into the former Zuiderzee, they would get stuck against that sandbar. They had to wait there until the tide was over or that they had already discharged part of their cargo, so that they were less deep in the water and could go over it.

If the ships were waiting there, they were in lying front of the pampus. And since there was not much to do on the ships, the crew lay idle … This is how the proverbial ( sort of translated in) Lying at Pampus arose.

When the fortress island was built at the end of the 19th century, it was also intended that it could maintain itself in wartime. Now the foundation naturally wants to continue that. The restaurant on the island and the fort guard’s house now have electricity during the day and at night in only a number of places. You can imagine that the fridge must of course remain on.

To generate this power there is a diesel generator that the foundation would naturally like to trade in for a better, less environmentally harmful way.

To finance this, a crowdfunding campaign has been set up with which money will be collected for this purpose. One of the ways is therefore the adventurous overnight on fortress island Pampus. 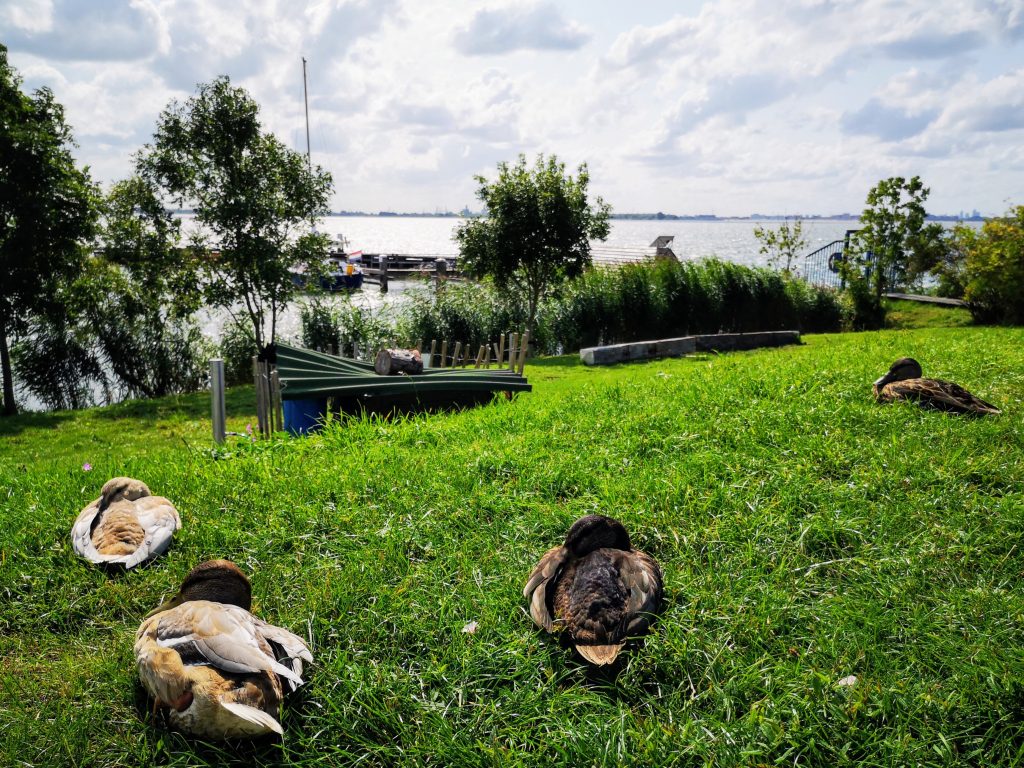 They have created a great way to do this! There are 3 tents on the fortress island that you can rent on the nights that are specially reserved for this. Then there is also electricity in the kitchen tent and then they leave the door to the toilets of the restaurant open for you. There is no shower yet …. but this is also an option if enough money is collected.

The tents are set up in such a way that you do not see each other and therefore really have the feeling of being on a desert island.

I thought it was a super fun challenge and I gladly accepted it!

Together with photographer Jeroen (that came in handy !!) I went to the island to spend an adventurous night in one of the tents! We took the boat to the island at 1.30 p.m. and thus had half the afternoon to look around before the other people would leave the island.

But we also had time to go on a tour. Ruurd told us a lot about the background and took us really in his story with his enthusiasm. There are guided tours every hour and I can certainly recommend that. The way of living and working in the time of that time is presented to you. Also the different periods that this fort was used will surprise you …

Did you know that Fort Island Pampus was also used in WWII? 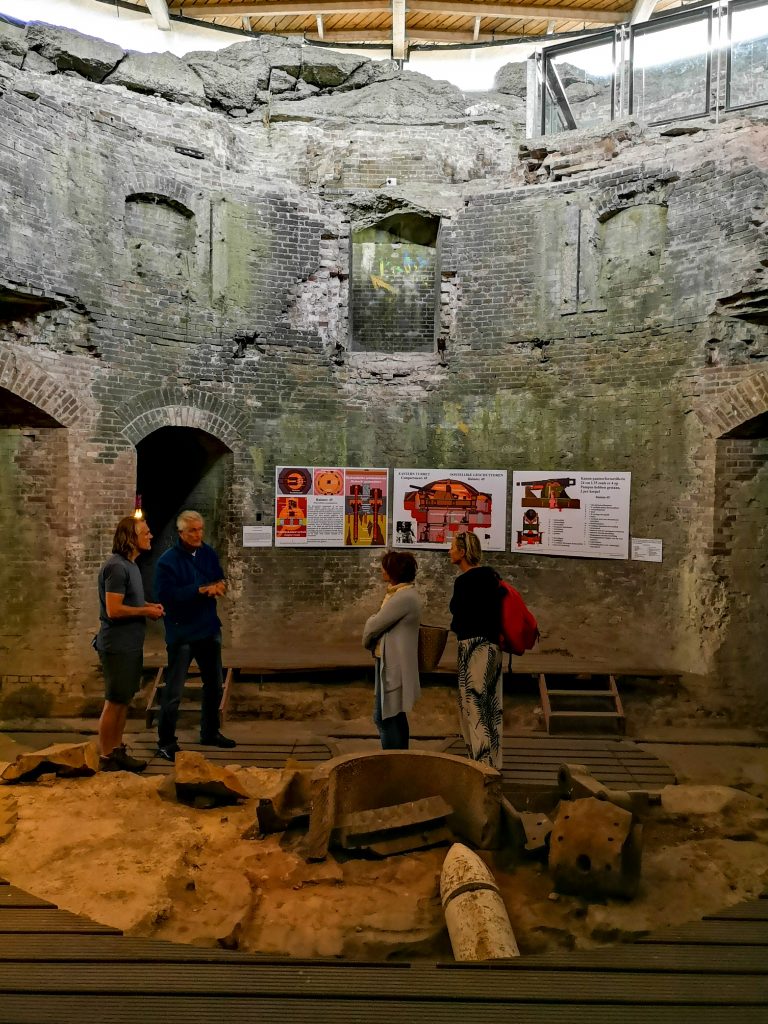 They call the toilets privaten (old dutch word)… I didn’t know it before I took the tour on this island. They offered little privacy but of course had to be present in large numbers. I don’t know how many men worked there, but there must have been some. As you see there were small walls in between but still… This was in the hallway! 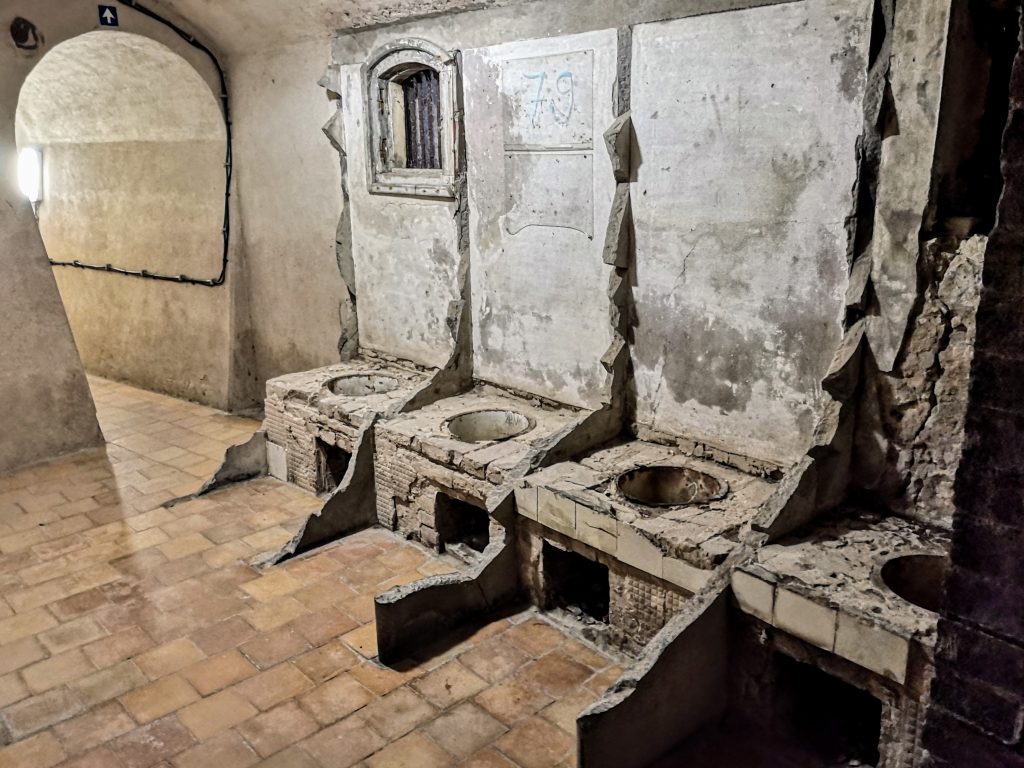 Ruurd who gave us the tour full of passion also offered us the opportunity to experience the balloon flight in between! 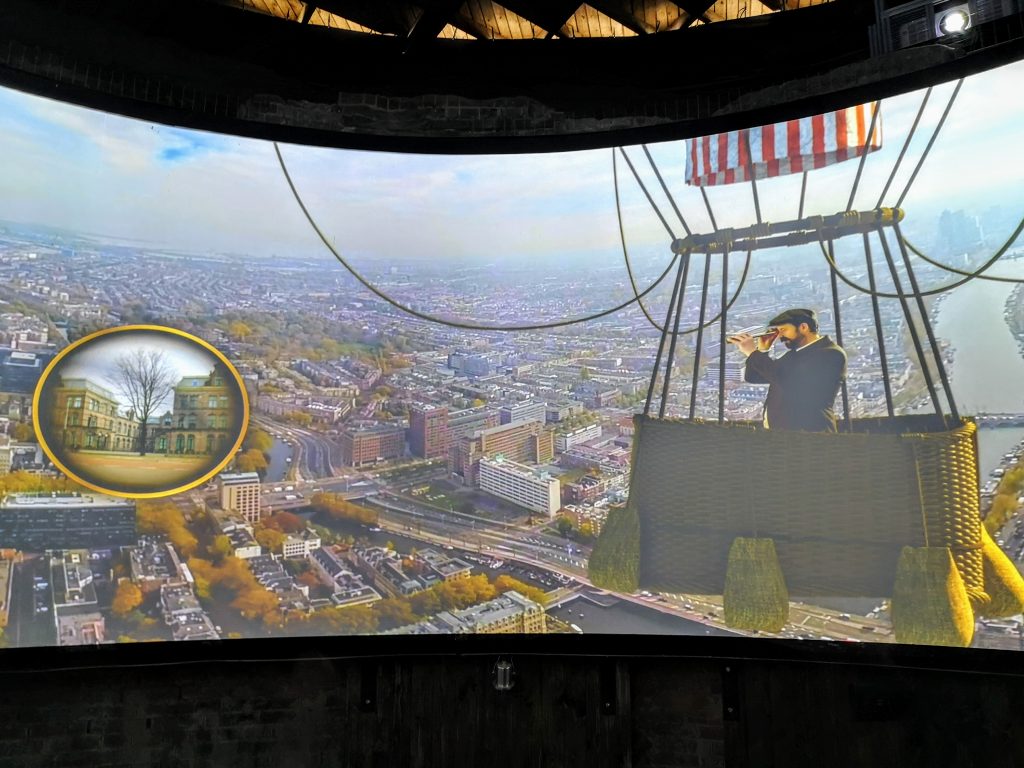 This year there is a new attraction with the highlight being the balloon flight. I really enjoyed it. You will be told by aeronaut Leon Mary from days gone by how the ‘Stelling van Amsterdam’ came about. Why it was built and what its purpose was.

In addition, a large number of other interactive rooms have been created in the fort that let you experience what it was like to work in the fort, how life was lived at the time and what the circumstances were. 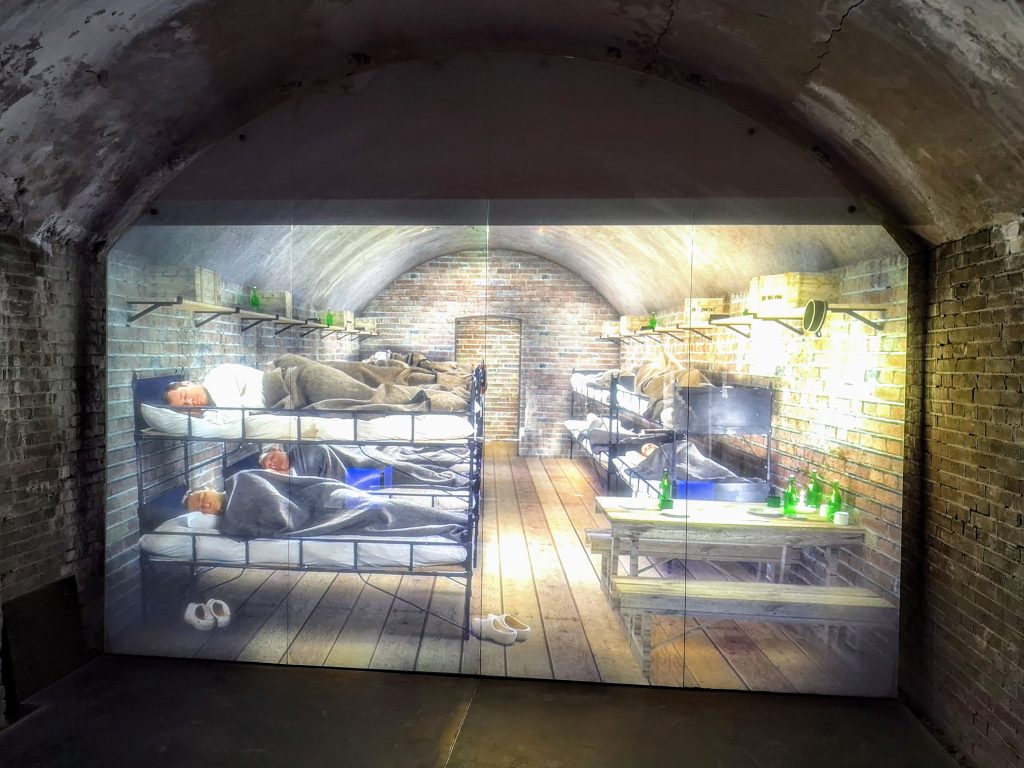 The fort has a dry canal, very strategically build out of course. The dry moat was in former times for the enemy, if he had come that far and were in the moat they would be shot at from all sides. 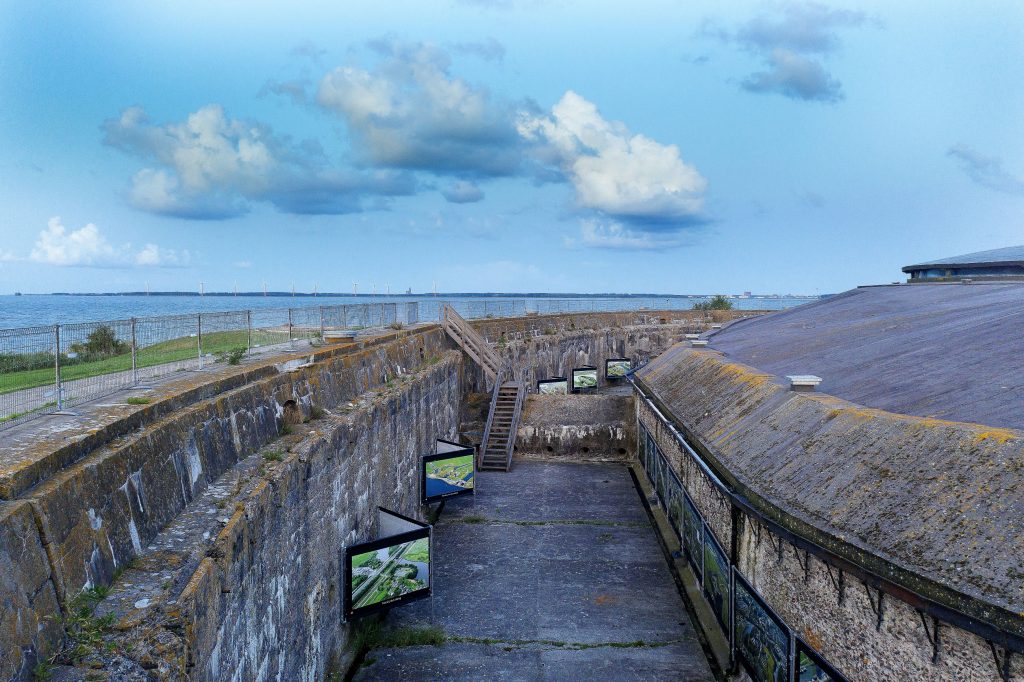 And then it becomes quiet after 5 pm on the fort island of Pampus when the last ferry turns back to Muiden. 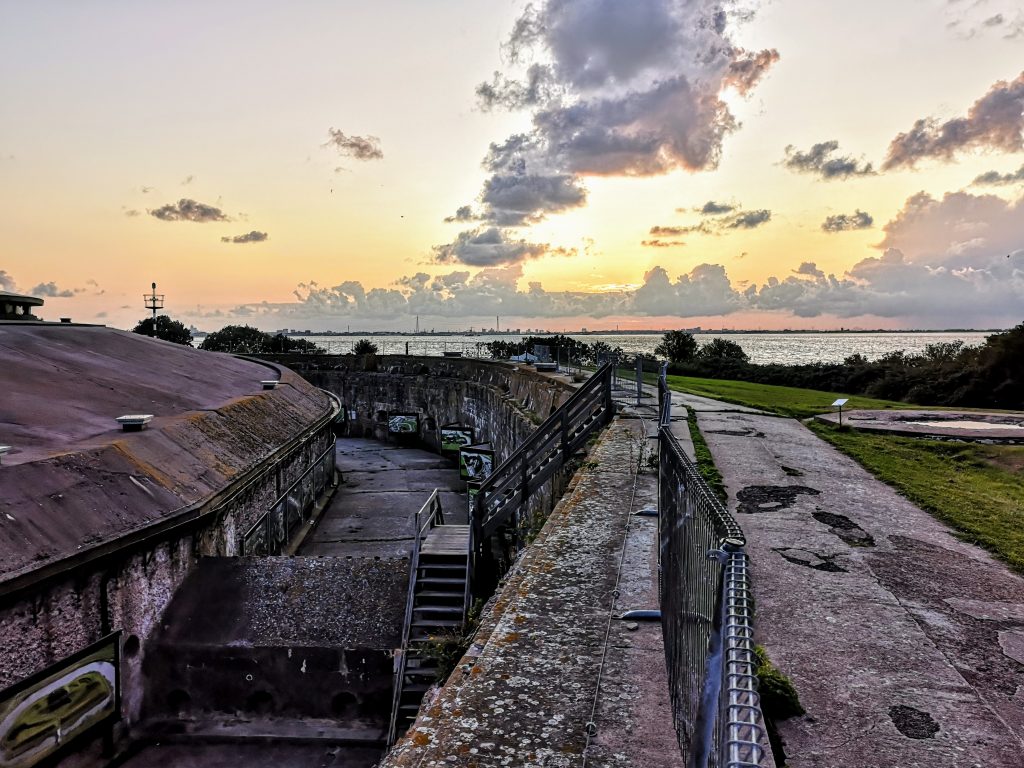 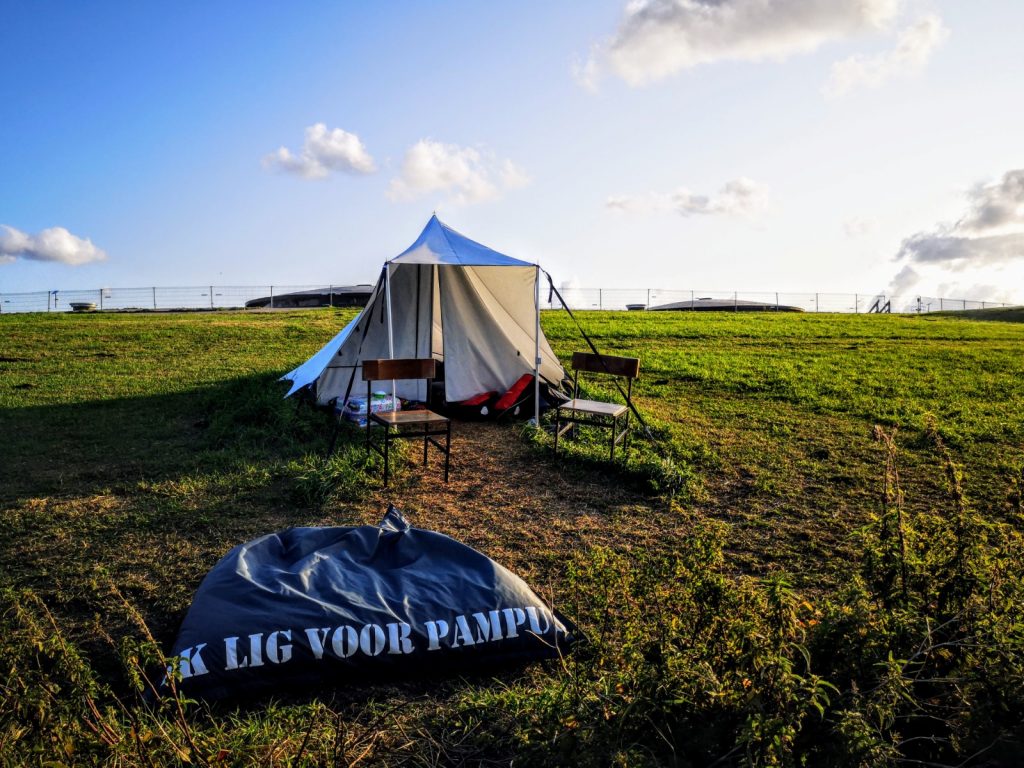 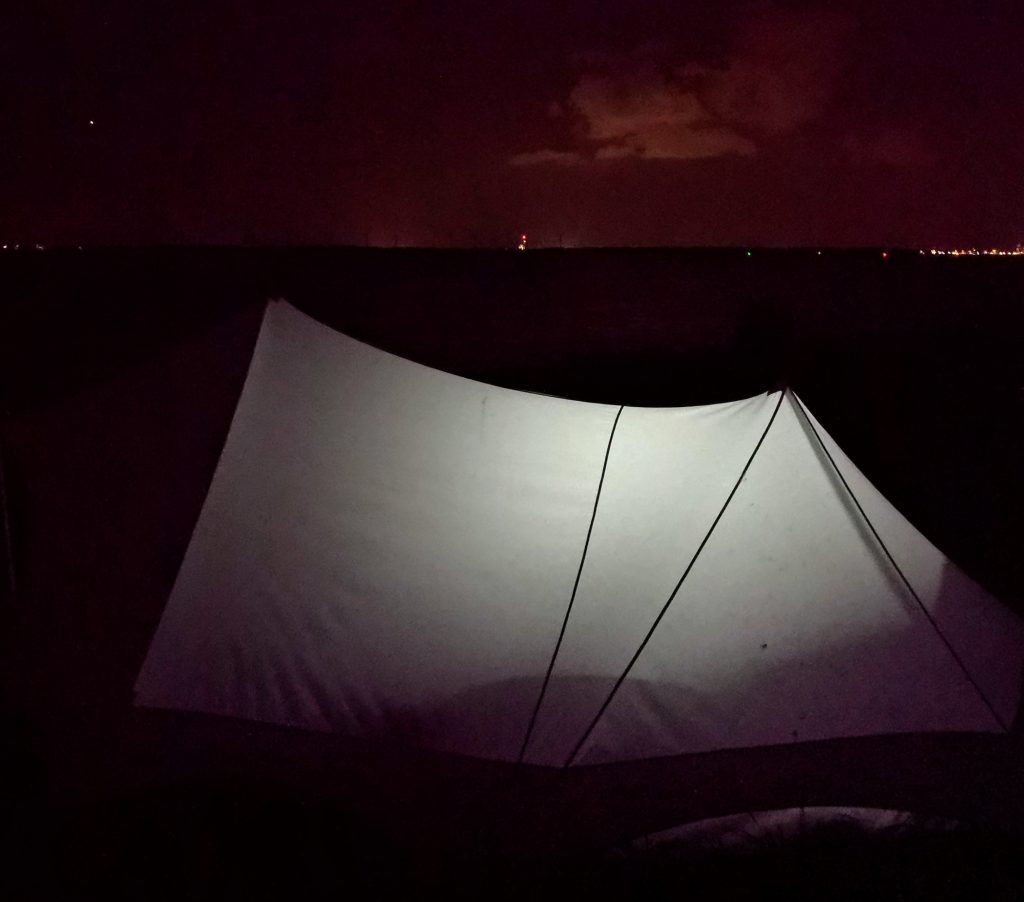 There are so many swallows on the island. The birds are flying all over the place as they were still busy feeding little ones today. So above and near the water are of course many insects so a feast every day in the air for these fast kites! 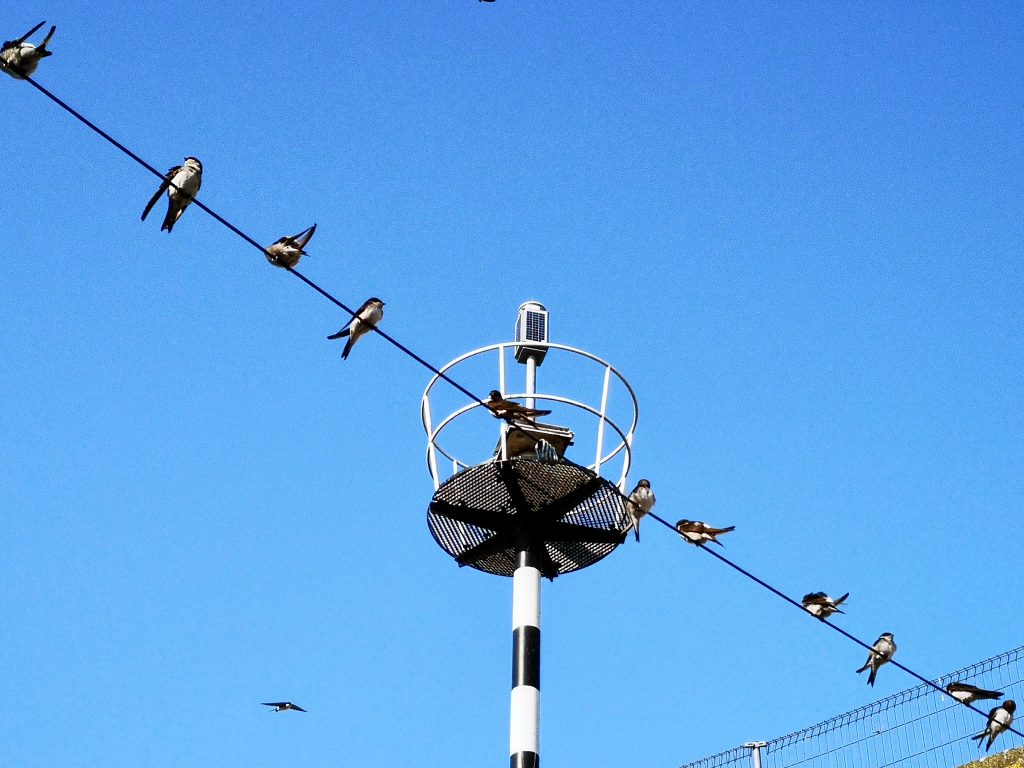 Many different plants grow in the green fringe around the island. I heard from a volunteer that this was once mapped and that they have a good overview of it. Who knows, it will be on Fort Island next year so that you can also look in the nature of Pampus for the, probably, unique plants and insects that have also established themselves on the island. 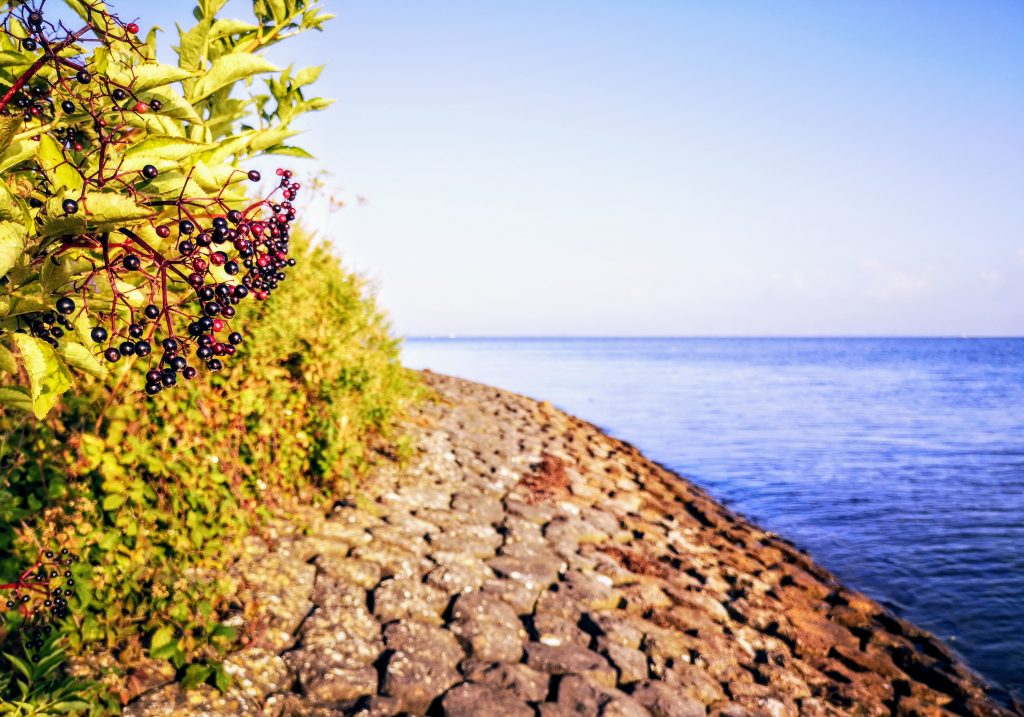 We had lots of time to walk around. It took a while before all the power went off and certain areas, in particular the interactive areas, were closed and so we could browse around the other parts. We were able to go into all other dark spaces, such as where the bullets were made, where the men were sleeping and where the huge guns had been.

It was quiet, the wind was blowing and the island was getting cooler. There is of course nothing that retains the warmth here a little, but when the wind subsided it was nice to walk around in peace for quite a while.

And then you are alone on the island and you can enjoy a fantastic sunset! 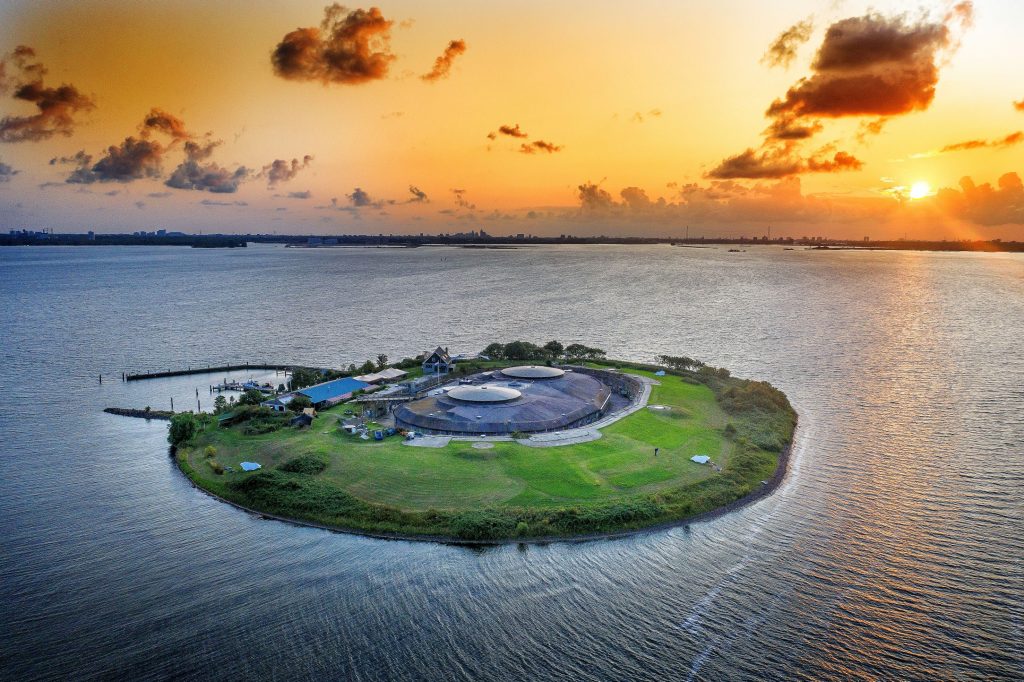 Thanks to Jeroen of JeroenFotografie for the great drone pictures!! 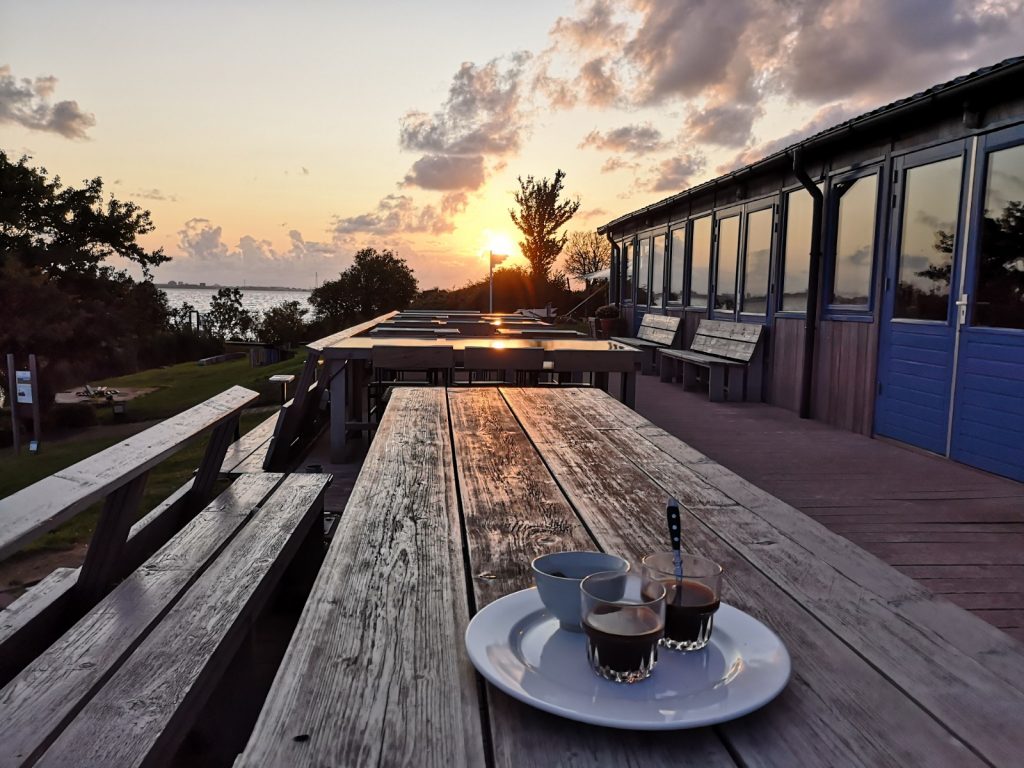 Check this part of the site: pampus nachten. Not in English but you can translate I guess

You can take the ferry from Muiden, but there is also a ferry that sails daily from Amsterdam to Pampus. For current times and dates, check the Pampus site

If you have a boat of your own you can of course moor your own boat but …. be aware that this is really a fortress island. Take into account the ring of basalt blocks that were used to prevent mooring. It is signalled on most nautical charts. 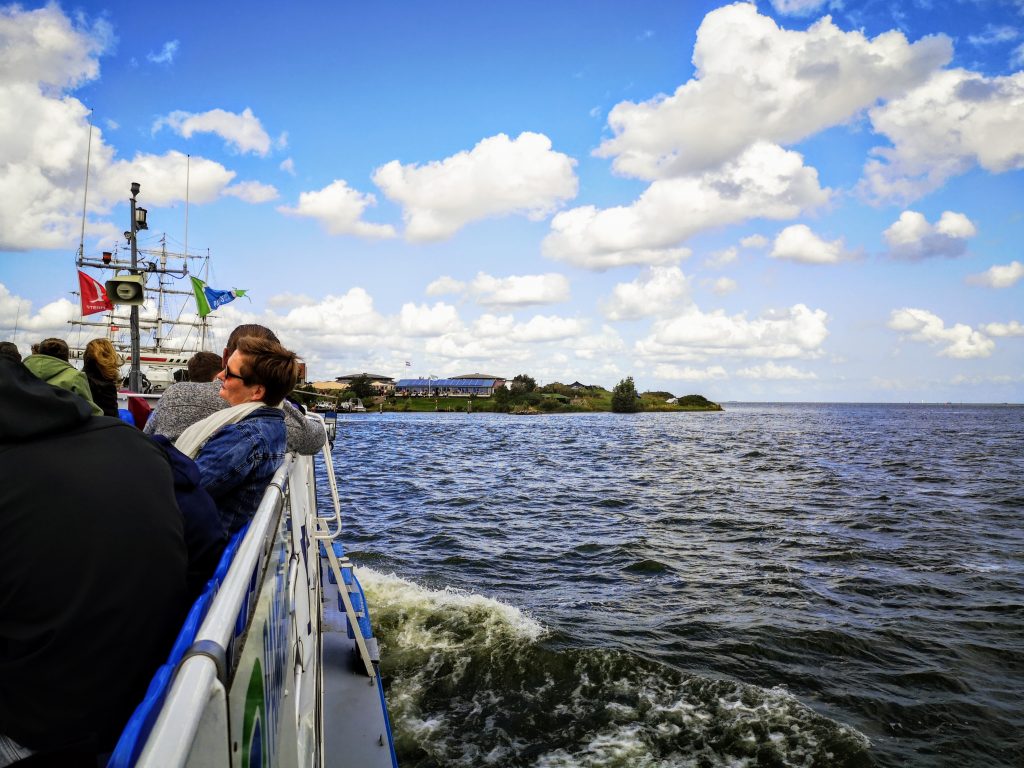 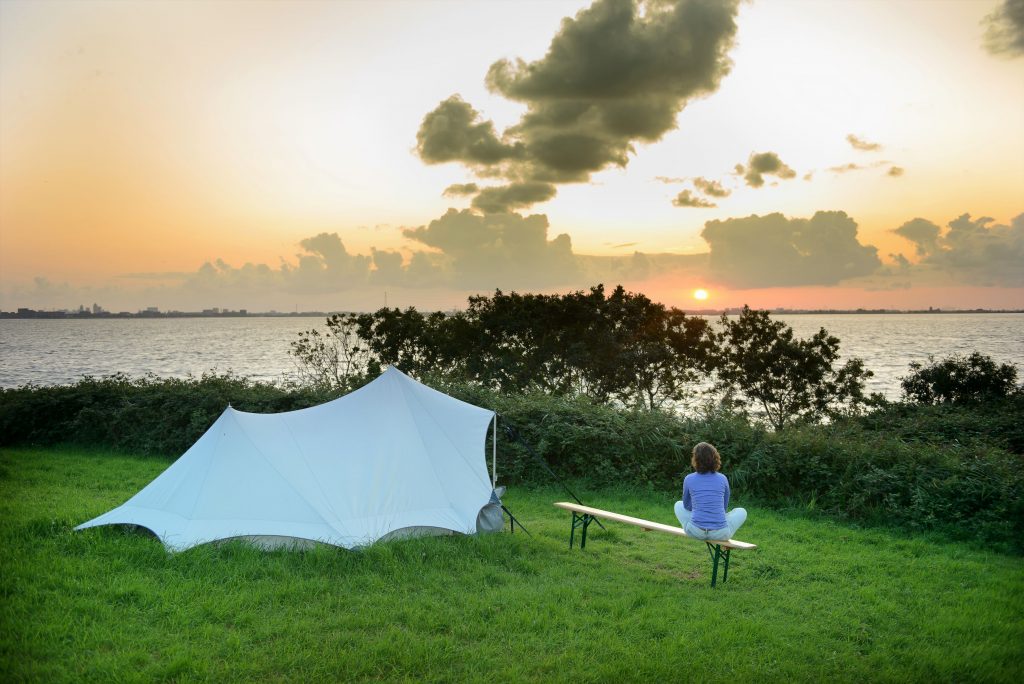 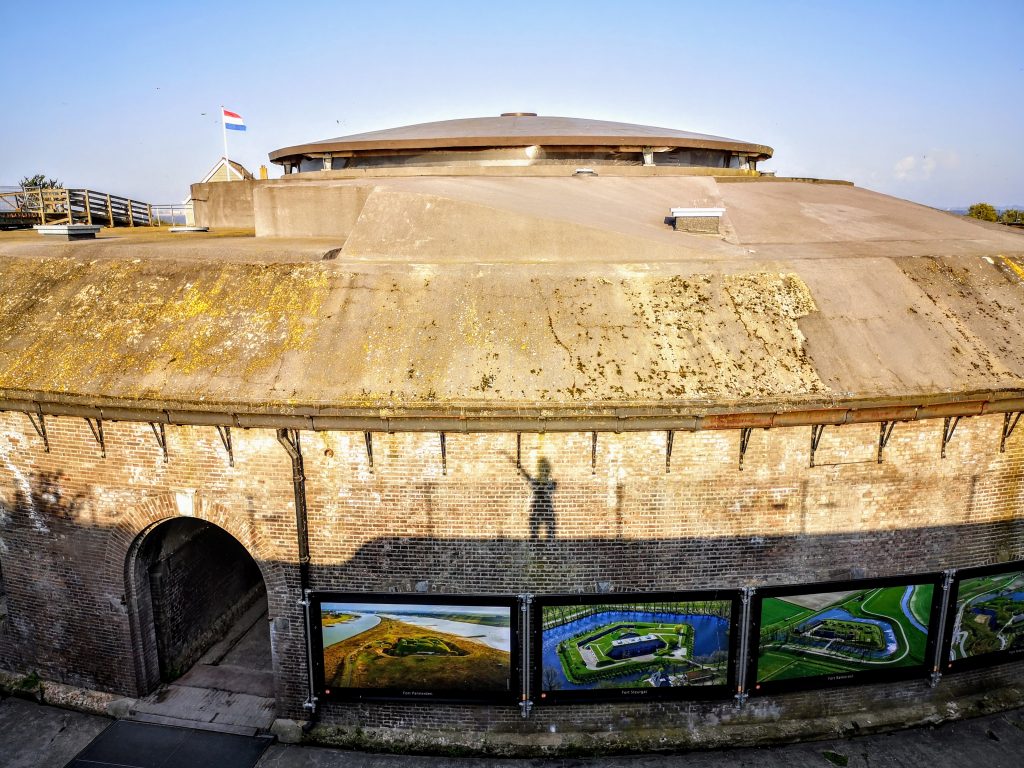 And then it was really time to go again. On my day of sleep (the day after a night shift) I drove to Muiden and the next day I had a late shift again so I had to get my uniform back on at 2 pm and be ready in the briefing for a day of vigilance and serving the civiliants. How well spent that free time!?! 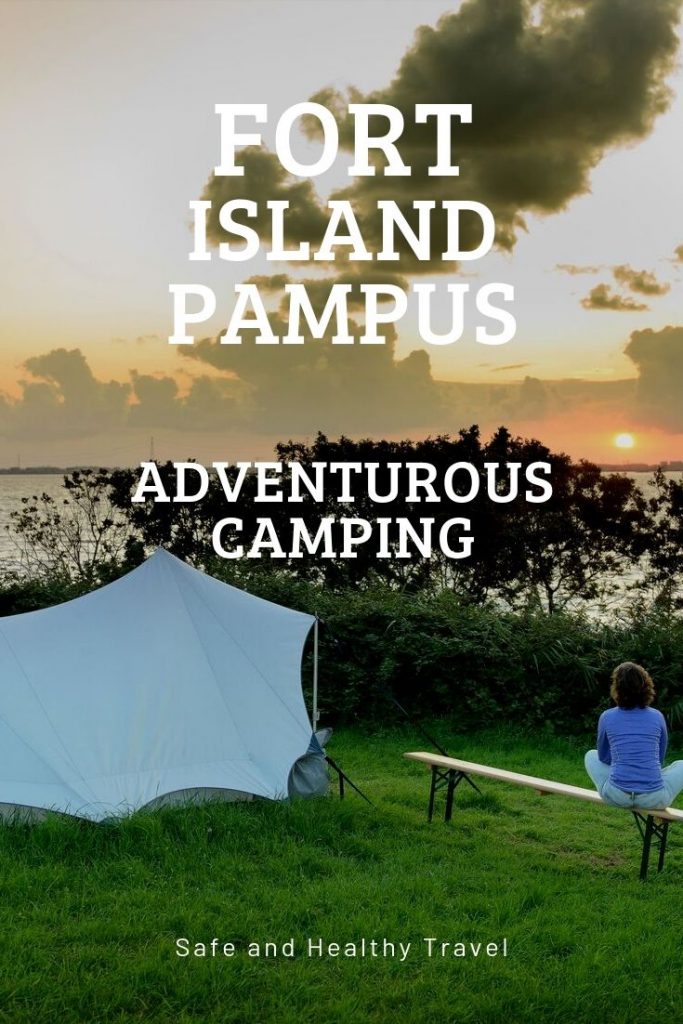 Looking for other Dutch inspiration?

Starshaped Fortresses of the Netherlands

10 Things you need to know about The Netherlands

Or go cycling in and around the great city of Leiden

Along the great Mills of Leiden – NL