If you are in Johannesburg and you dont have that much time to spend but you, ofcourse want to see the highlights of it the Hop on Hop off bus is a great thing to do! I have this bus in several cities all over the world and I do like the concept a lot!

Or how you know it: Johannesburg

It is great to explore a city in that bus because you get a sense of the city. You get the feeling on how big the area is you need to see, or maybe how small the circle of interest is in the city. You get a nice map of the city with the highlights pointed out on it, a small description comes with it. 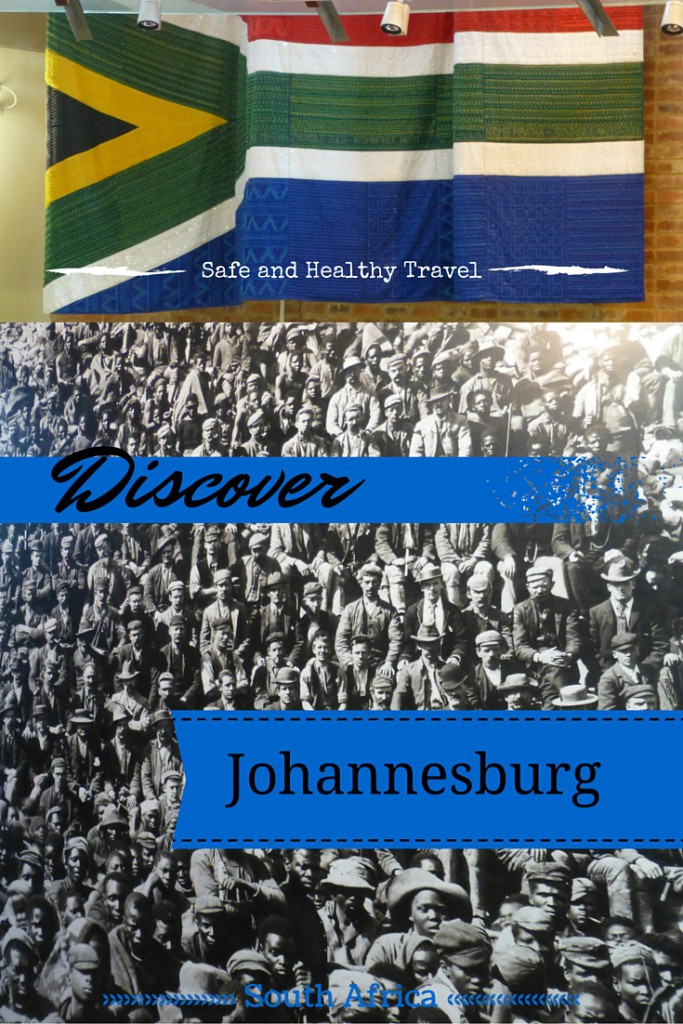 At the end of my trip to South Africa I had a couple of days in Johannesburg but I didn’t want to spend them all in Johannesburg because I wanted to go to Pretoria and I wanted some more time in Soweto besides the busstop of the Hop on Hop off. The day I went exploring Jozi or Jo’burg, as the people of Johannesburg call their town, I took the bus and did the whole tour in once. I stayed on the bus till the last stop. I wanted to see the town, to feel the town, to see the area and people and get the feeling of the town. Plug in and listen to the story and the music the play. The last stop was Constitution Hill. That’s where I bought a ticket and took a guided tour around the museum. I thought it was very interessting and so impressive to see the history. 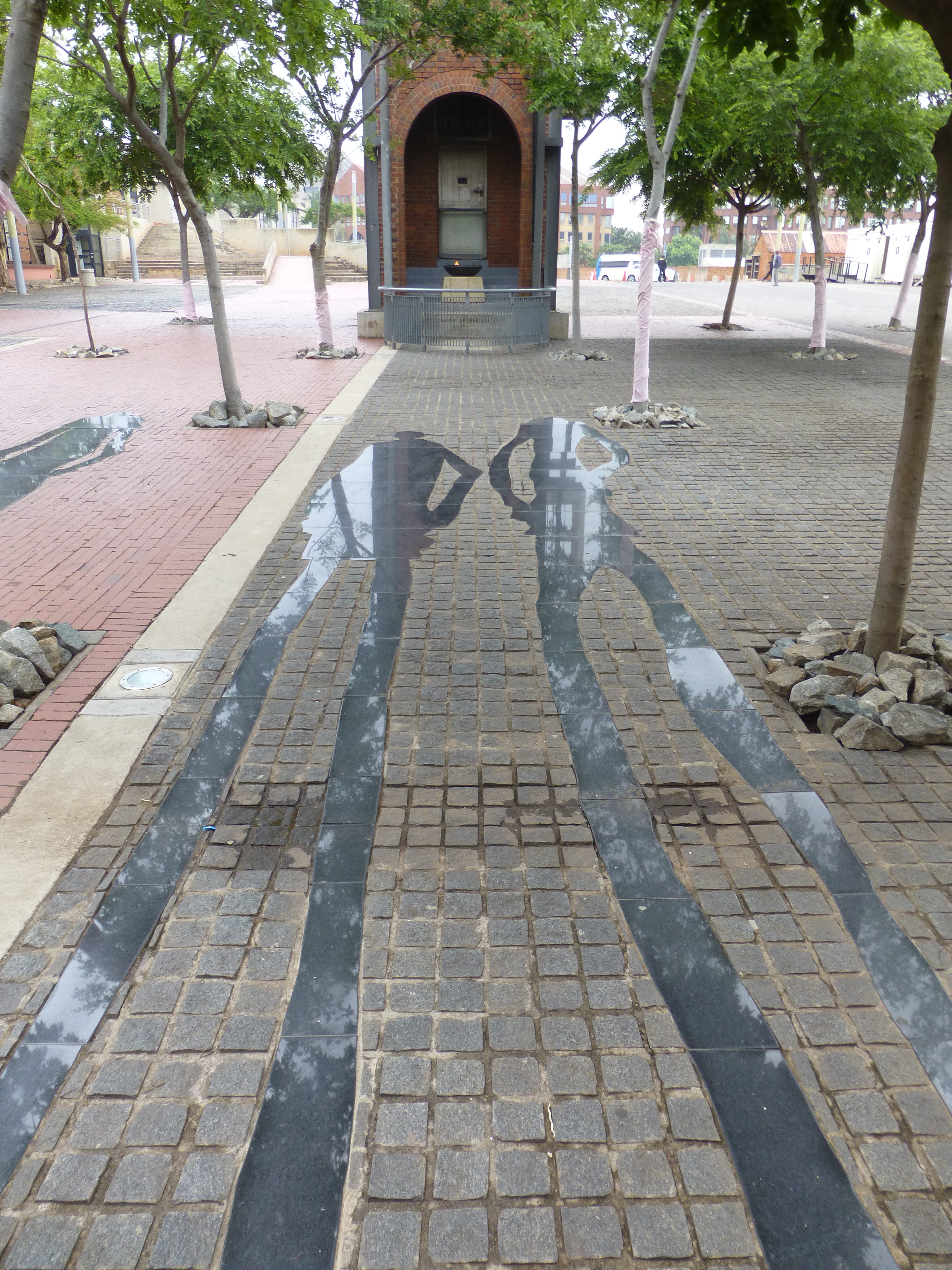 Constitution Hill used to be a fort. Later in history, the year 1892, they build it into a jail. At first the jail was build for white prisoners, later they extended it so they could keep also black people. And later women also.  The guide showed me several old parts of the jail, like the kitchen, where the prisoners would get there food. He told me that it depended on your colour how much food you would get. If you were white, coloured or black.  And also what kind of food you would get. It is unbelievable!! 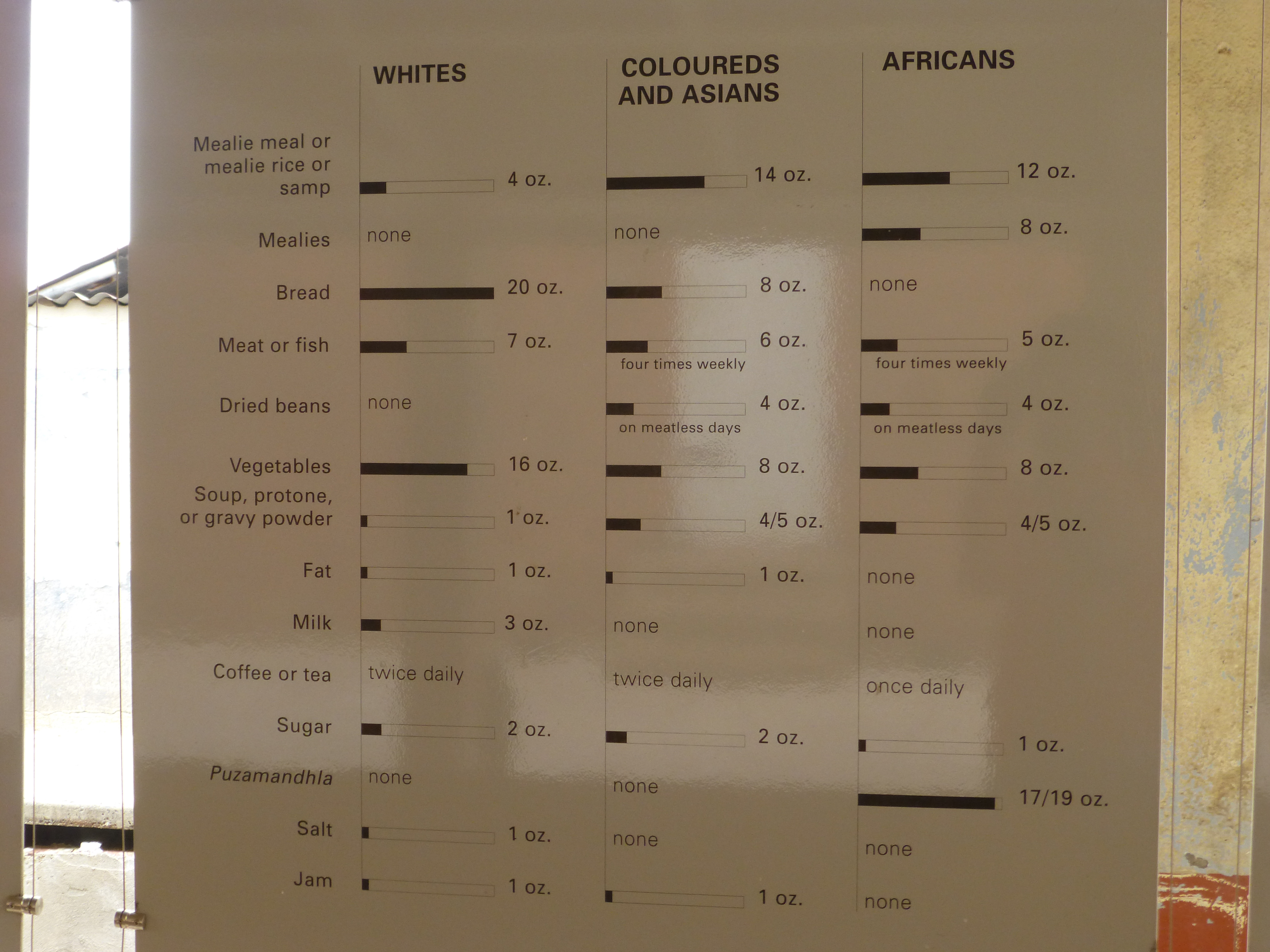 He also told about the humiliation, how the prisoners had to be naked in front of the guards and they had to do some kind of ritual, the called Tausa. They had to do this to show the guardes they didn’t had anything hidden in their anus. 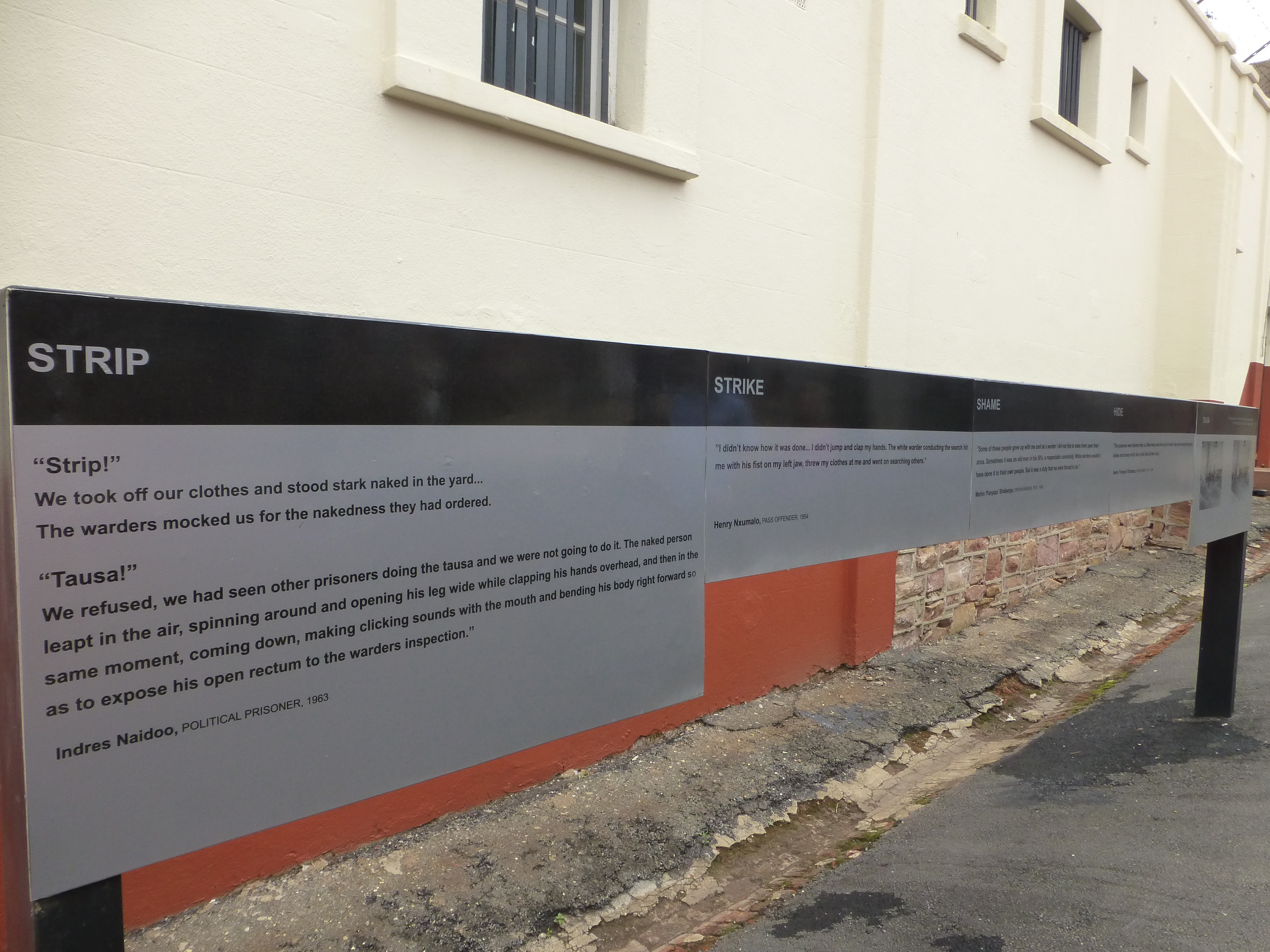 It’s been written down by an ex prisoner how he felt at the time of the strip and the ritual. There were some pictures taken at the time of Tausa, they were taken secretly by a photographer called Bob Gosani. Those were showed in the media at that time and ofcourse there was a lot of rumour about that. The Tausa took place on the lower part of this courtyard

The guide showed me some isolationcells. They are visible in the back of the picture shown above. On the inside of these cells were words and sentences carved. They were still very visible.. 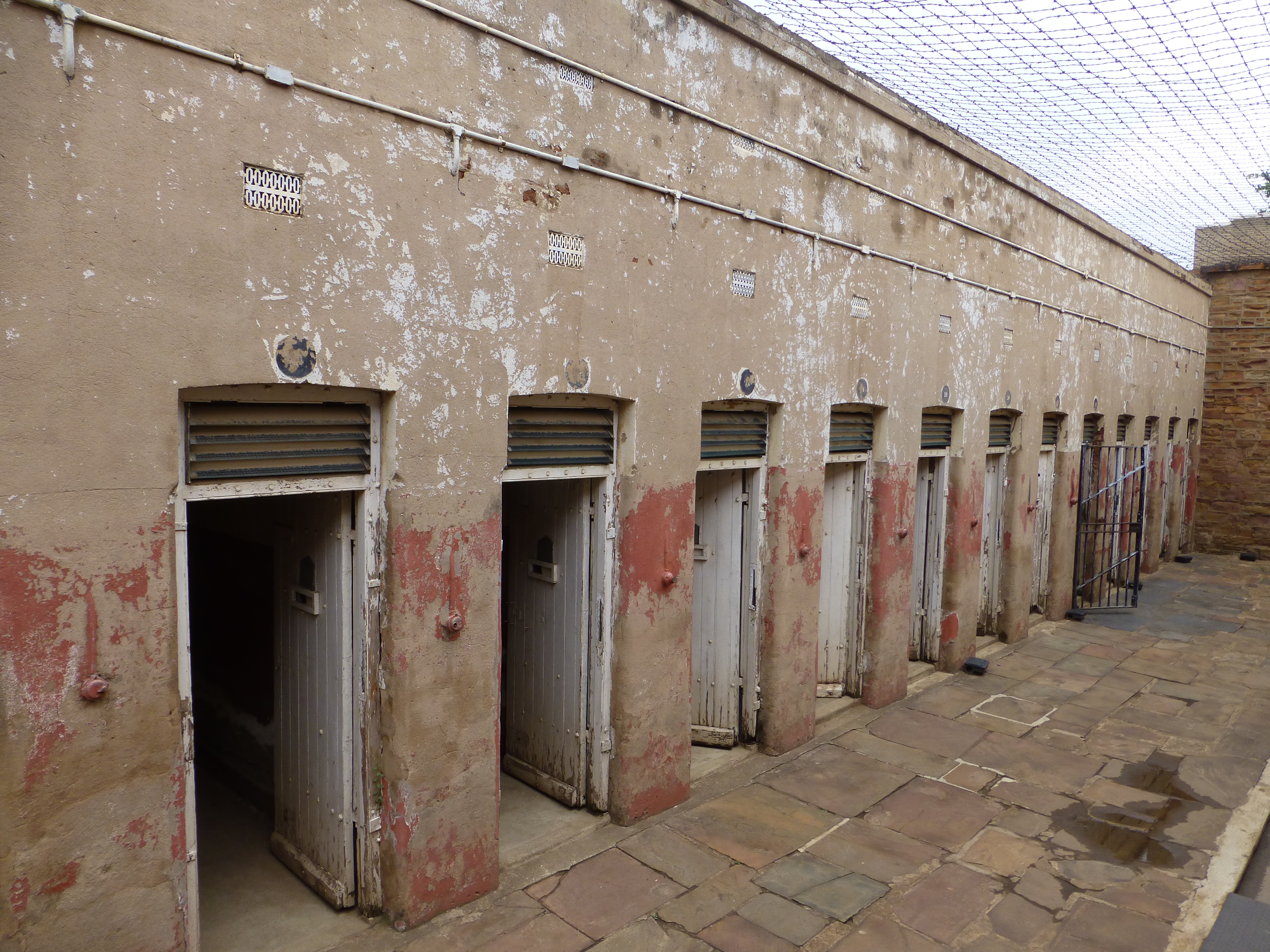 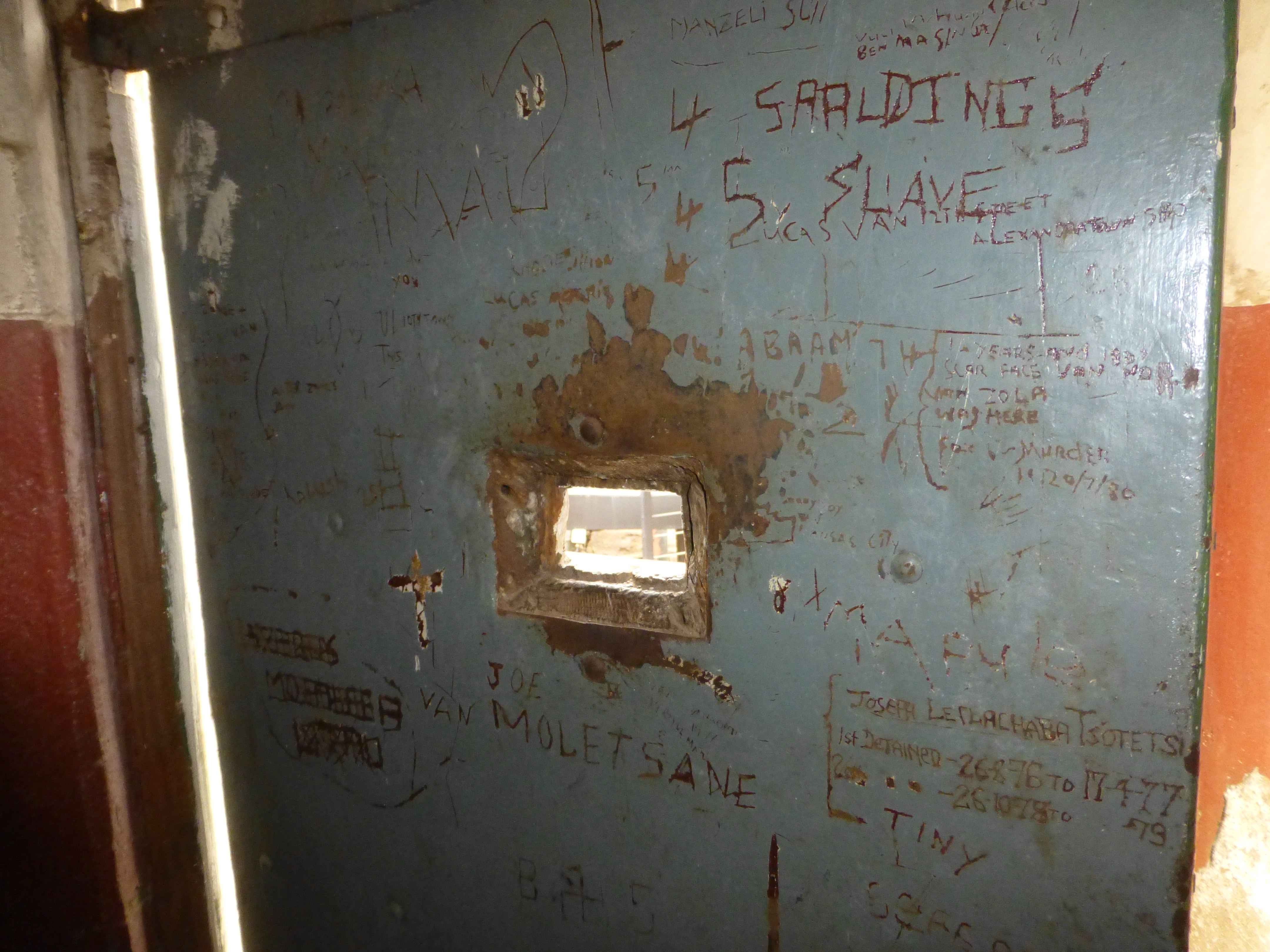 The guide told me that Gandhi also was a prisoner in this jail, he had been here for a long time. There was a room dedicated to Gandhi and to his remembrance at Constitution Hill. There were pictures and clothes of him and from the time he was there. 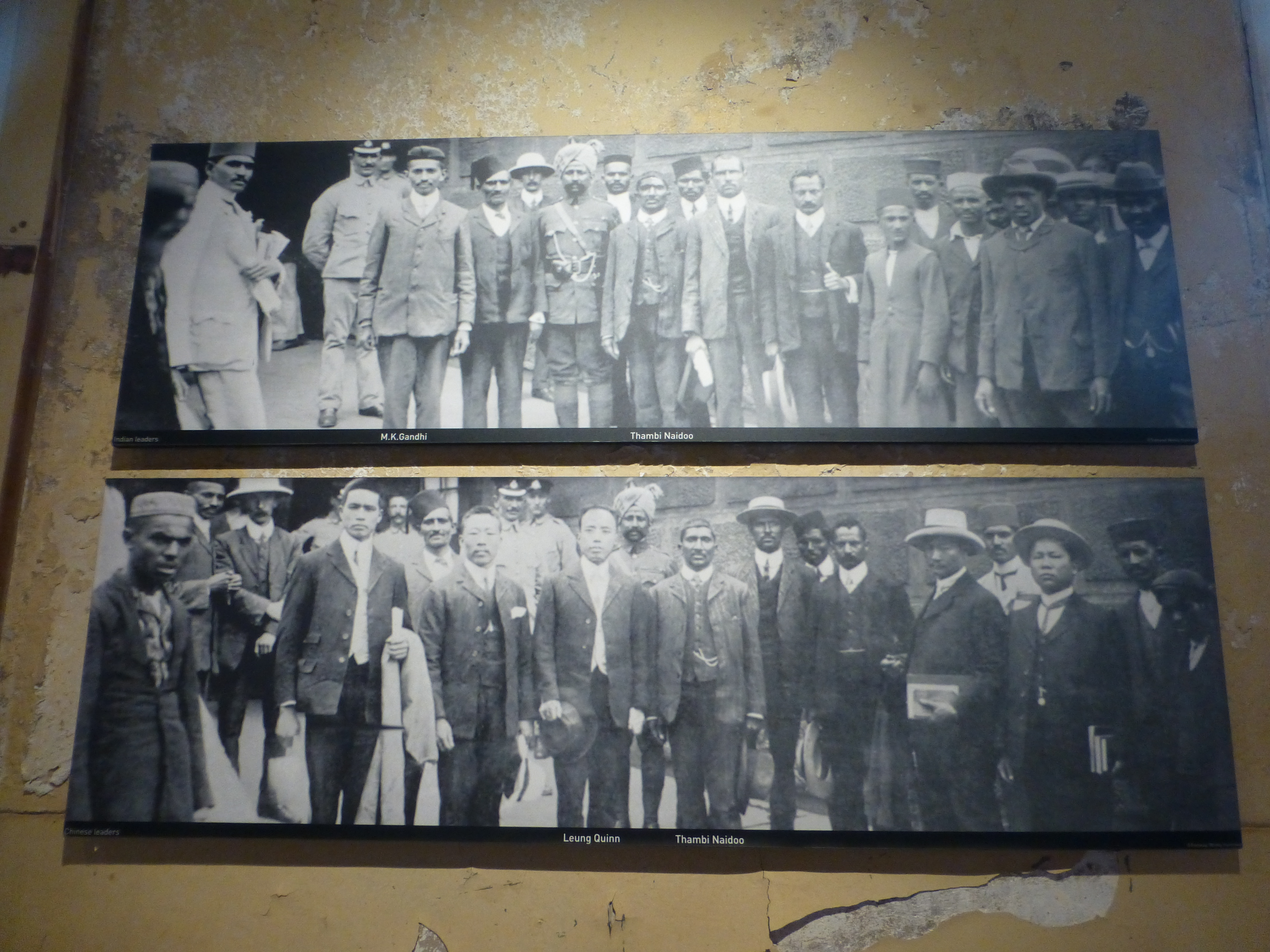 And when you go out of the jail you will see the newly build court, the highest and most important court of the city of South Africa. I think it is a real nice building. Everything they used for the building has a meaning. I think that was the best thing!! Everything is a symbol for what is was and what is now should be. And ofcourse all that has to do with equality. Many of the bricks and fabrics they used are from the old jail. Also a part of the courtroom is made of glass so you can see the old jail. It is meant to be seen while in court and while in session you will be reminded of the past, how it was and how it never should be again. 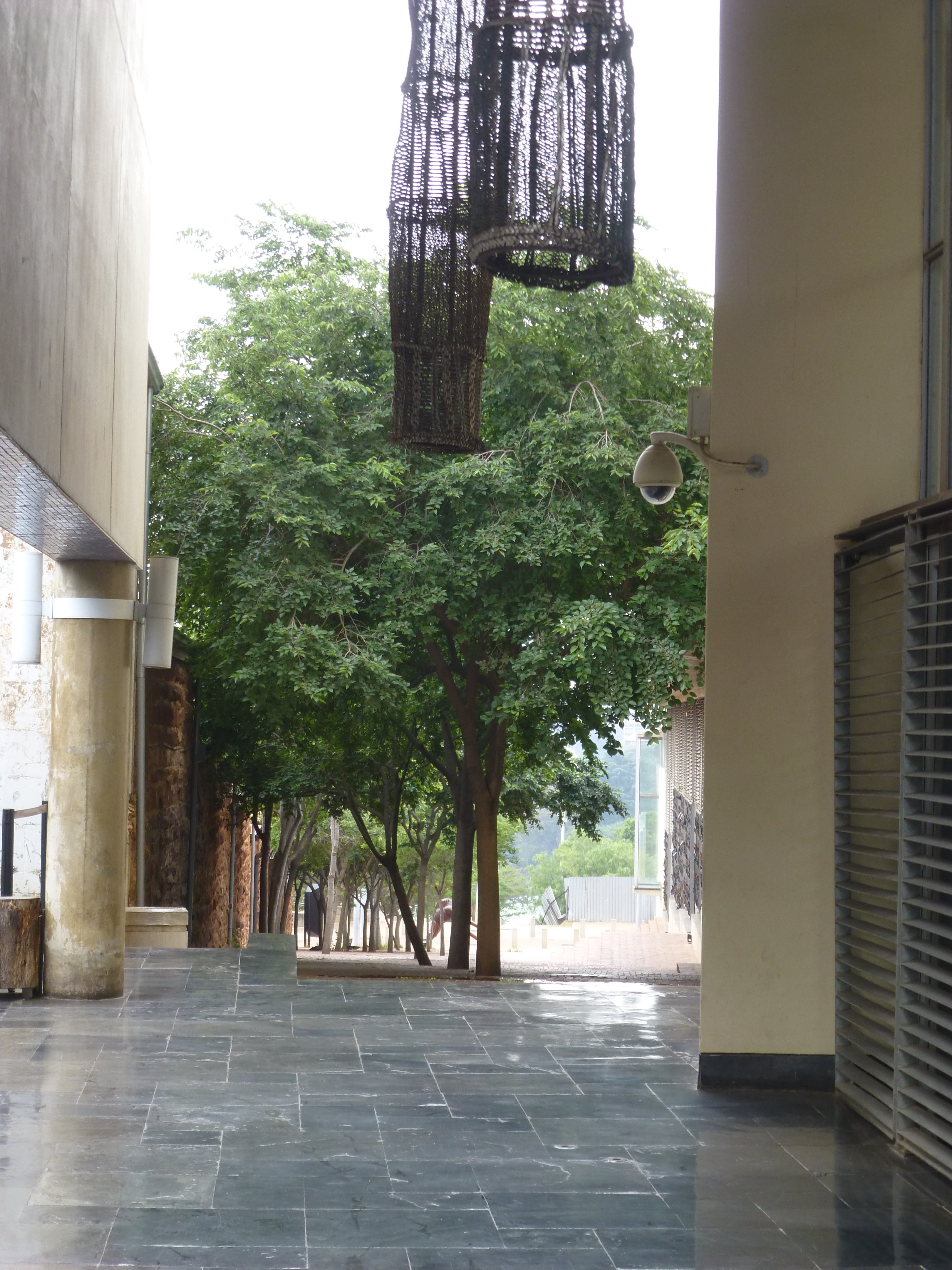 Outside, between the jail and the court 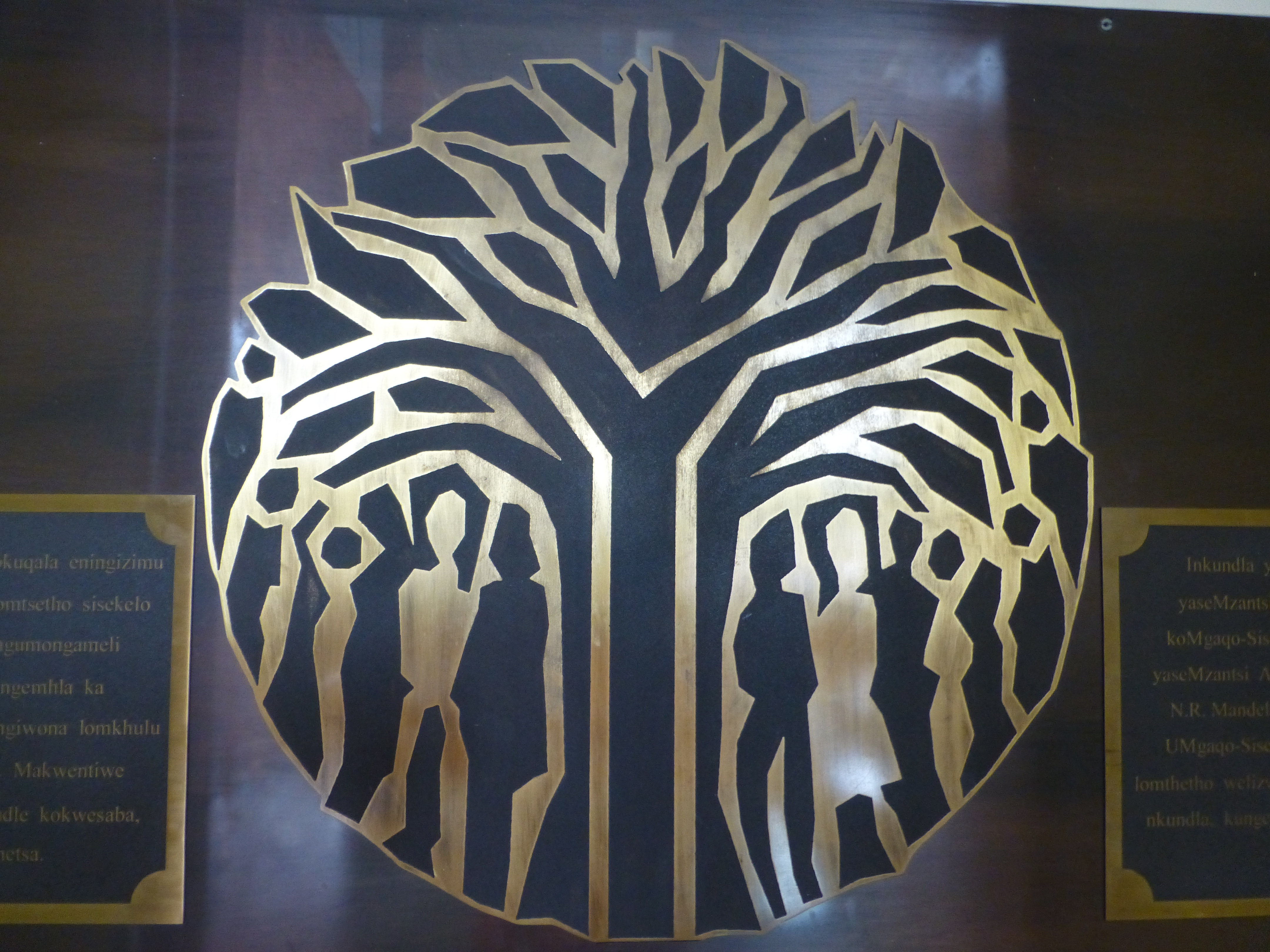 Symbol of speaking justice. Like they did in the old days, under a tree Biggest flag in the country, made out of beads. Like so many traditional objects 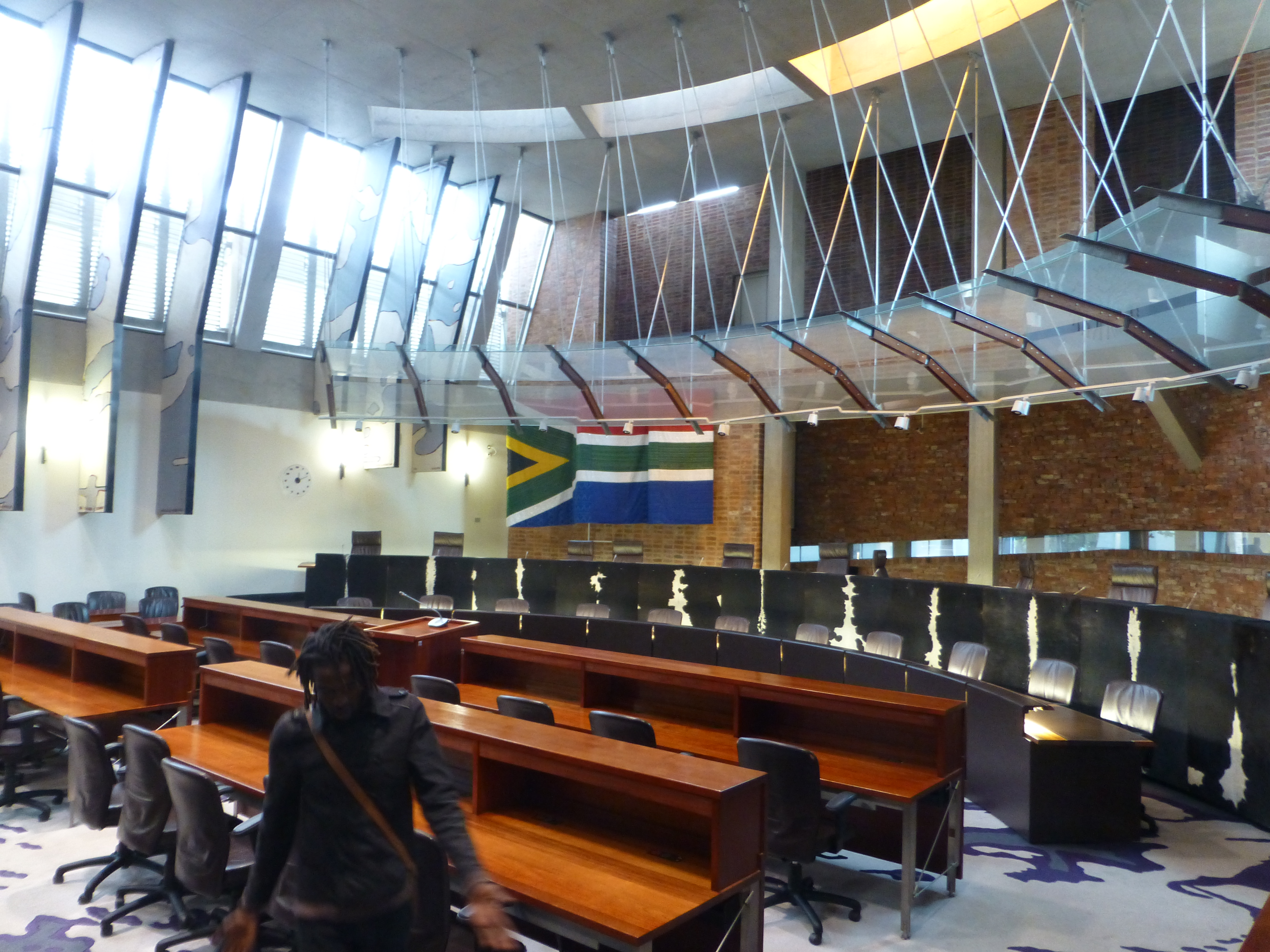 After this impressive visit I went back in the bus. I took an extra half round of the trip to go to the highest building of South Africa. They call it the Roof of Africa. I wanted to go enjoy that view. I would be great, heard people talking about that. The building is 50 levels high and counts 223 metres!! The upper floor has all around a glas wall, so you get a 360′ view over the city. It just costs you R15 to go up and within a minute your up there. You can take a relaxed cup of coffee or a drink because there is also the highest cafe of South Africa 🙂 Unfortunately the weather wasn’t great at the time I was there, it was grey and cloudy but I did had a good view on the city! It is great to see the buildings and the city underneath you. The morning had already come to an end and it was time to get something to eat. I went back on the bus  to go to Gold Reef City Casino. I had seen earlier today that there were lots of restaurants. I also saw many people getting out in the morning either to go to the casino or the Gold Reef City, it is an amusment park with all kinds of activities.Very nice for a daytrip when you have small children in your family or when you are a teenager 🙂 I went into the casino and found the Ocean Basket. One of my favorite restaurants in South Africa for a warm and great lunch with fresh fish. In Knysna it was great and it is a chain of restaurants you see anywhere.

From the exit of the casino you can cross the street and enter the Apartheidsmuseum. It was the next stop of the Hop on Hop off bus too. At the museum I bought a ticket. I saw on that ticket that I was randomly chosen to be ‘blankes’ (White) and that I had to enter through the door that belonged to the whites. I was full of surprise by this. I saw other people walking with there eyes wide open and looking at there tickets. Couples were splitted and each had to take another door. We hesitated but eventually did what was meant to be done. We entered the door that was either meant for white or coloured.  I took the one for blankes. It was so IMPRESSIVE to feel discrimated by random…

I saw all kinds of pictures of identitypapers of people that had entered. I saw the hall besides me, it was the same. When I went on the hall turned to the left….the other hallway went on…appeared. I hesitated again…would I go through the pictures..underneath it…and look what on the other side would happen? I didn’t do it, I really wanted to but I also thought…this is not what the museum had planned for us to experience. So I went on. It was the purpose of the museum to get us thinking…well it happen to the max inside my head!!

I was wakling on the other side of the first building we entered. I was standing outside and a hill was in front of me. A small hill we had to climb…. I started to walk alongside the building, I saw mirrors. In those mirrors I saw all kinds of people walking up…I also saw myself in one of those. At the top of the small hill all people I saw before entering the museum were standing there too, from there on we would go the same route and make the same memories of what we would see and experience.. What an impressive way of entering a museum!!! Will never forget that!! These were the mirrors we saw. You can see me standing there, making the picture. You also see other people walking up, walking here a long time ago. All walking the same path. The rest of the museum was the history of the Apartheid. It showed how things were managed, how unfair people were treated. They were placed under labels and were treated like that. In the museum it is forbidden to take pictures but I couldn’t resist this picture. The look in his eyes…. Take your time at the Apartheidsmuseum!! – Johannesburg

I spend more then two hours in this impressive museum. So my day ended here, this was my last stop and I went back on the bus to go back to my startingpoint. I had arranged a taxi from my logde, Brown Sugar Backpackerlodge. I was picked up and could lay down on the couch in their public area and think about everything I saw this day.

Going over this day..

One day in Johannesburg is too short. The disances are too big to easily go from one highlight to another. If you want to see everything on the Hop on Hop off bus tour you should take a two day pass. The extra option on that pass is the extention to go to Soweto. That’s a combo deal.

The musea I visited were great. I easily could’ve taken some extra hours in those. especially Constitution Hill. I have the feeling that I didn’t see half of it, unfortunately. Other tourists I talked to told me they walked there for at least 4 hours.

Want to read more about my South Africa Adventures?

The Penquins of Betty Bay

The first day of my 3 day Safari at Kruger Park

A Township Tour in Knysna

And can I inspire you to go cycle too?

Cycling to the fish of Tanji – The Gambia