During your tour in Namibia or Botswana, you will definitely come into contact with the local tribe, the San, formerly also called the Bushmen. This is no longer a desirable name in this day and age, as I understand it, although you still hear the term Bushmen a lot in Namibia and Botswana. Experience the Kalahari together with the San! On my long trip, I went for two bushwalks with the San and stayed at the Living Museum of the Ju/’Hoansi tribe.

You have to get to know the local San tribe, but the desert Kalahari is also a place that you really have to experience. 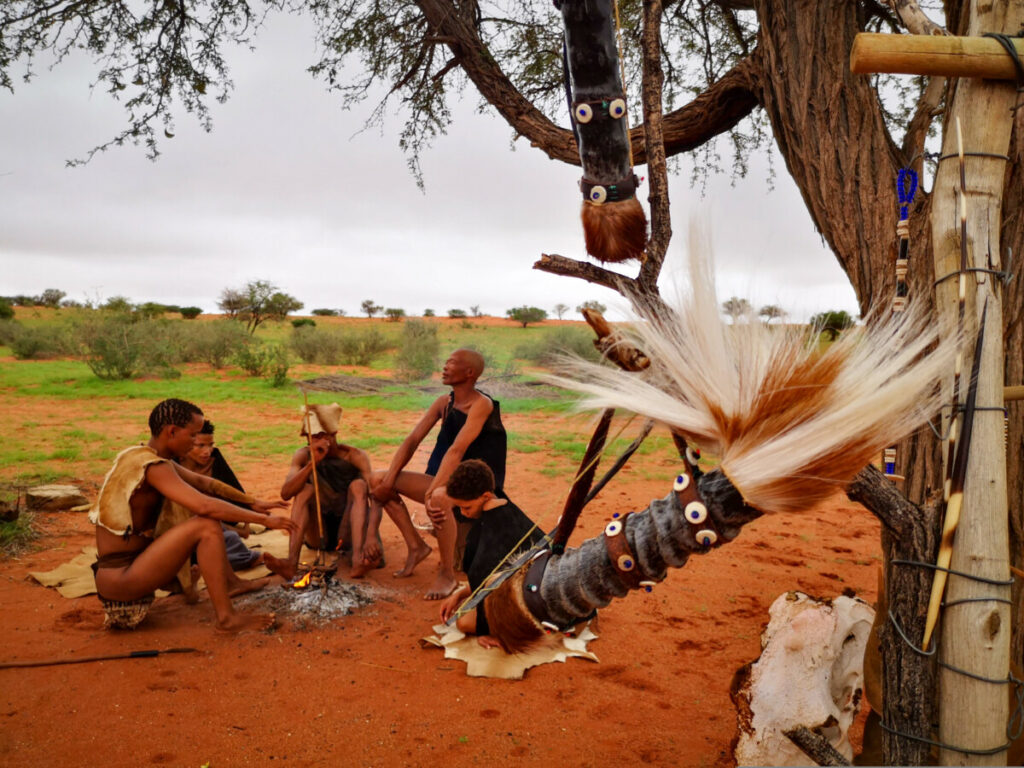 If you don’t have much time during your trip, it is of course easy to book a morning or evening walk at one of the many lodges where you will be staying. In many places, these walks are offered on a daily basis and allow you to experience the Kalahari together with the San for a few hours.

Did you know that the Kalahari is semi-desert? There is considerably more rain in the Kalahari than in a real desert. That gives this ‘desert’ just that extra touch.

When I drove into the Kalahari during my first days in Namibia, I stayed at Bagatelle Kalahari Game Ranch on the Campsite. This is near Mariental and I was on my way to the tubular trees near Keetmanshoop. I drove from Windhoek about 260 km downhill and got to know the 4WD a bit on the way.

With this sunset my 72 day roadtrip Namibia started

Morning bushwalk with the San at Bagatelle – Namibia

It was my first night camping and that evening I had prepared my meal and enjoyed the sunset. I woke up quite early and with my cup of coffee I walked around the campsite. There were several millipedes crawling along and in the area. At first, it scared me because I thought it was a snake. The millipedes are quite large and also go by quite quickly. 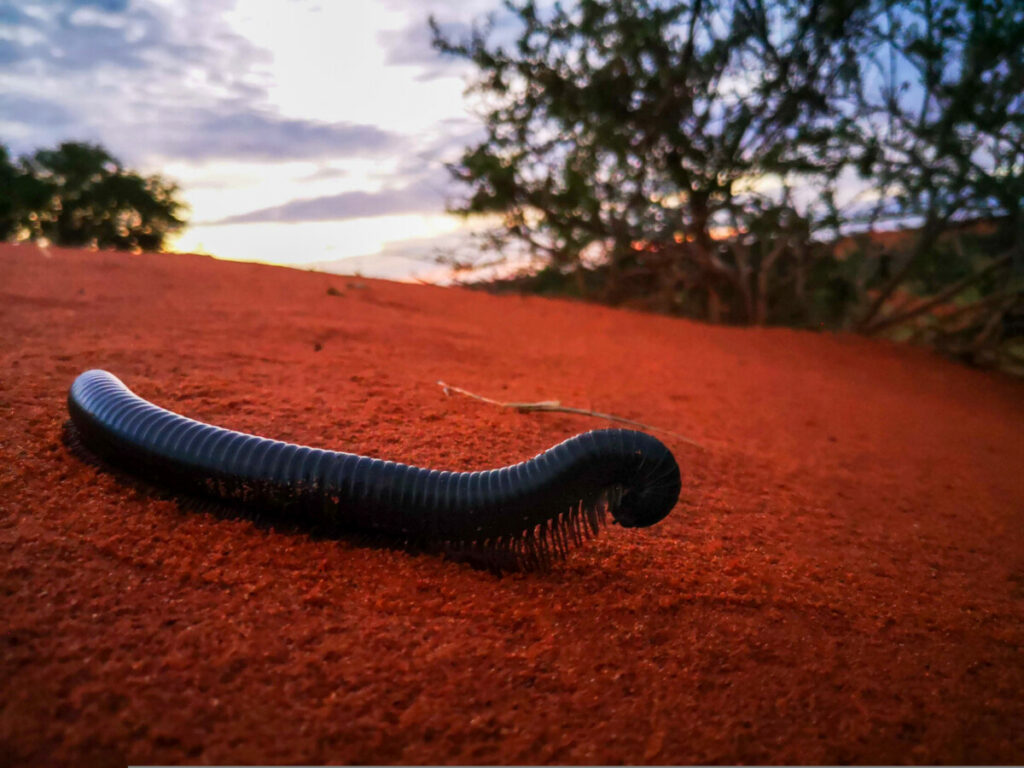 I had booked a morning walk with the San before breakfast at the logde. After my cup of coffee, I got dressed and walked the kilometres across the ranch to the logde. On the way, there is a chance that you will see some ostriches. The day before, I had made a detour for that, because it is a male with some females and the male was looking at me somewhat suspiciously. When he also slowly came my way I showed him very clearly that I did not intend to do anything in his direction. It worked and slowly the big ostrich turned away and went back to his ‘females’.

Experience the Kalahari with the San – Namibia

There was another woman who had discussed the walk with the San and shortly afterwards we were picked up by a man I recognised. Yesterday, I had seen him working here in the lodge and now he had put on his traditional clothes and was taking us into the Kalahari. When we were a bit on our way, another young man joined us; he had overslept and apologised in the local click language. This was translated by the first man who could speak English well. 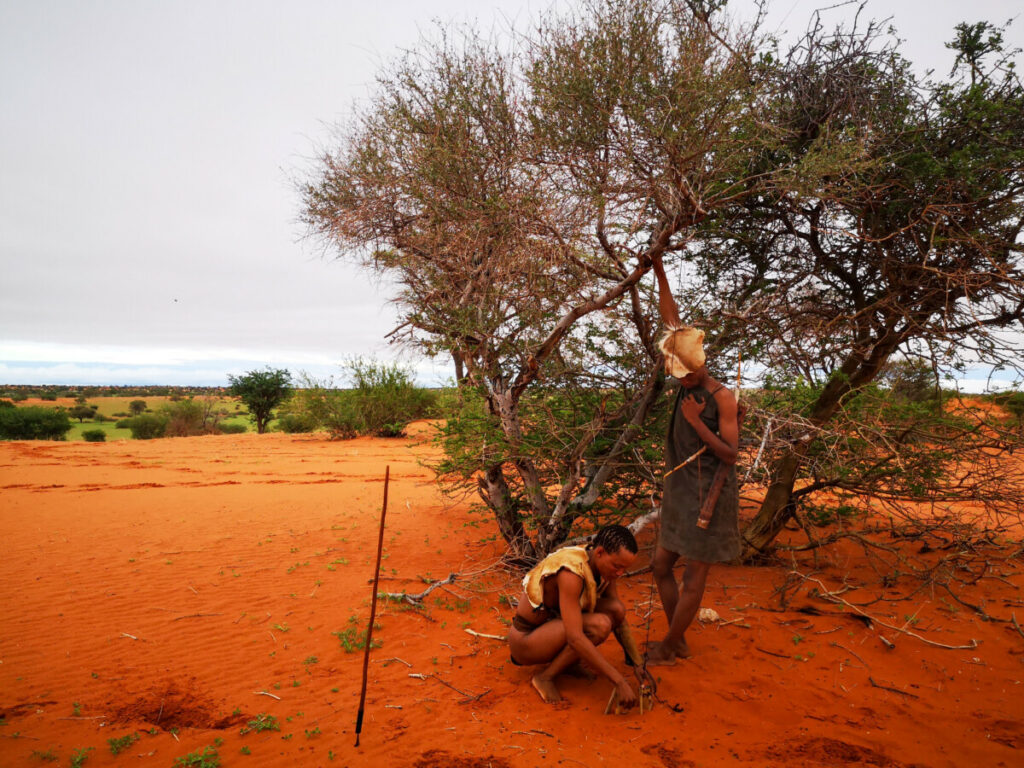 You probably know the sound of clicking. Very recognisable and unique for this side of the world. The click language in Namibia is called Koisan and sometimes has as many as 7 different clicks. During these walks, they tried to make me sound like a click in a word. Great hilarity, of course, because what they do as a matter of course is something I can’t do.

My tongue doesn’t work, my voice falters and I get stuck in the movement. It was a very strange experience. It looks so simple, but it just doesn’t work with a western mouth and language background.

Evening bushwalk with the San at Tautona Lodge – Botswana

After spending quite a few days in Namibia (40 days), I crossed the border into Botswana. My first stop was Ghanzi. I stayed there in a room of Tautona Lodge and planned an evening walk with the San that evening. That aternoon I also walked in the Kalahari, I wanted to experience the desert. Starting to love the emptiness in which you end up seeing so much… What is empty then, eh? Every desert I have visited so far, I am not bored for a single moment because you get to see so much. 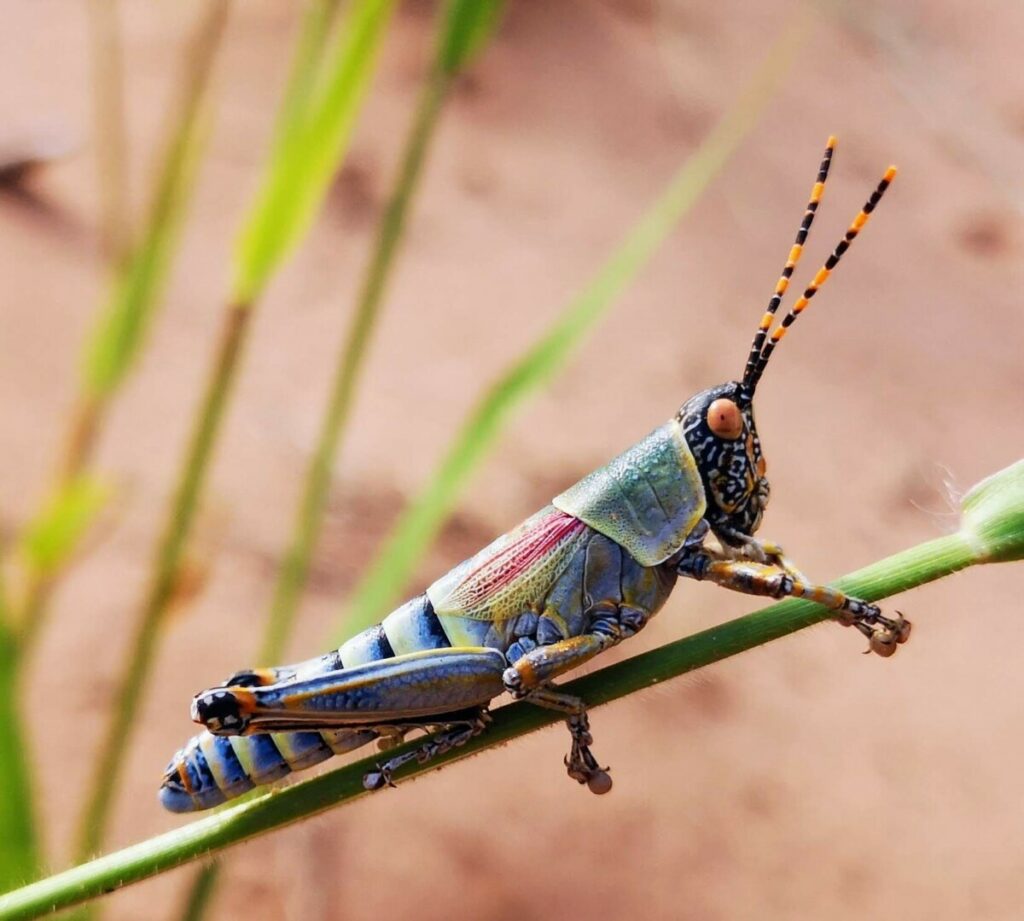 That evening, a man and woman took me for a walk. They told me about their lives, which are no longer their lives. But they still think back of it with nostalgia and that if they could, they would love to go back to how it used to be. Walking through the scarcity of this desert, they come across all kinds of things they can eat. From leaves and roots to berries and branches.  The woman had wandered off at one point and came back eating, she showed me what she had found. Like a treasure, she showed me the delicacies. 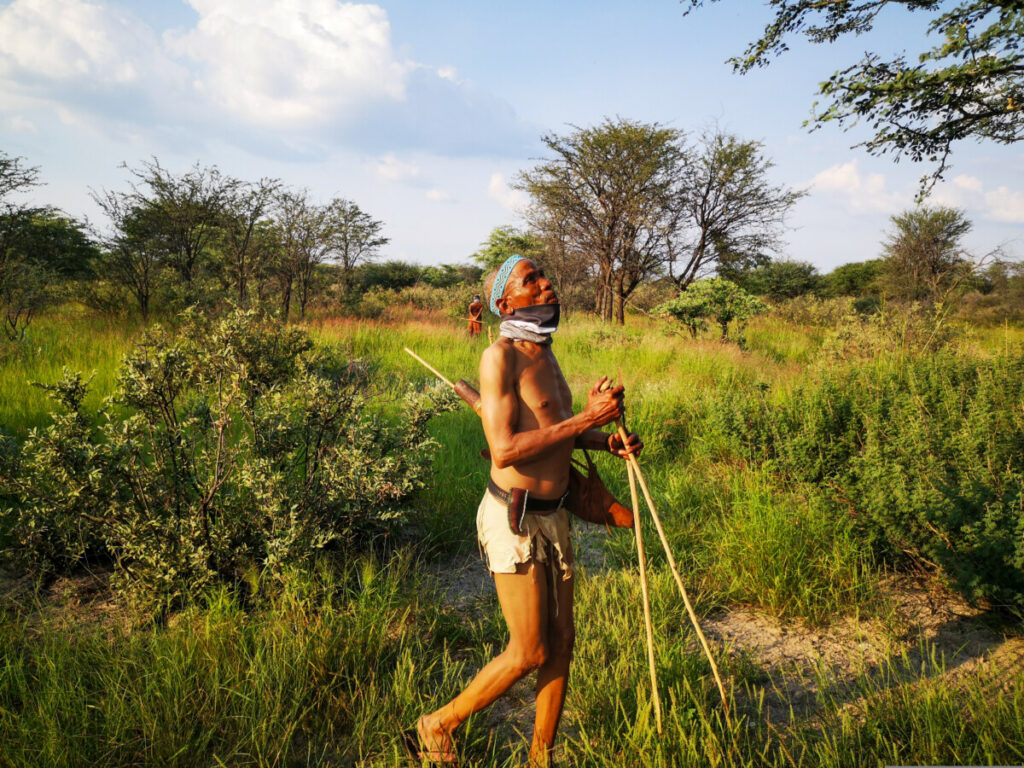 Experience the Kalahari with the San – Botswana

When it got a bit cooler, they showed me how they make a fire. With two sticks of different kinds of wood and some grit from another branch, they have a smouldering pile of it in no time. They quickly rebuild it with very dry, thin twigs and, blowing, they get the fire going. How nice to see.  The cooperation between them is also fun. What is not done properly by one is quickly repaired by the other. 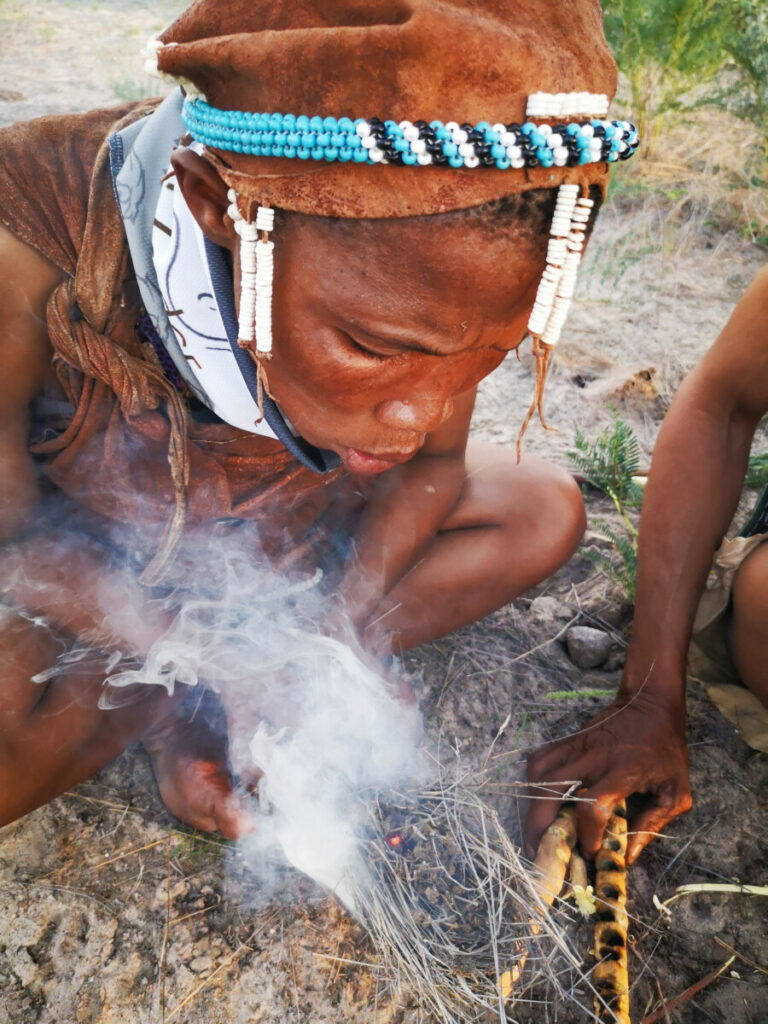 I reported to the meeting point just outside the Ju/’Hoansi village. Quickly I was welcomed by a young man. He introduced himself as Elias and he would be leading my stay and visit to their museum for the next few days. We drove back a bit, away from the village, and there I found the old village. There was a campsite there and they had made a toilet and shower. There was no water, but it would be brought to me. If I wanted to take a shower, that was no problem at all, then someone would bring a few litres of water. This was hung in a bag from which a hose came out with a showerhead so that I could stand under it.

My campsite at Ju/’Hoansi – Namibia

I was presented with a programme that I could participate in. Because it was quiet, nothing was done or performed until I booked it. There was one other family and they had ordered the dance evening for that evening. So I signed up for that right away. And for the next few days I also signed up for several workshops and walks.

I also took part in a morning walk again. Here they also showed me how they stored water in an ostrich egg in the ground but also how they got water from a tree. Different roots were dug up and eaten raw but also some were kept to be put on a fire later and then eaten. And finally I was shown how they would catch game, they would sneak very slowly in the direction of where the animal would be and then they would shoot it with a bow and arrow. The arrow was of course poisoned, which they also took from nature.

A new bow was made for me later and we had a little competition with it. The San became so fanatical that his bow broke because he stretched it so far. What fun we had because of that. For that reason, of course, I had won because my new bow was still good. It was really fun and also very sociable with the whole group. 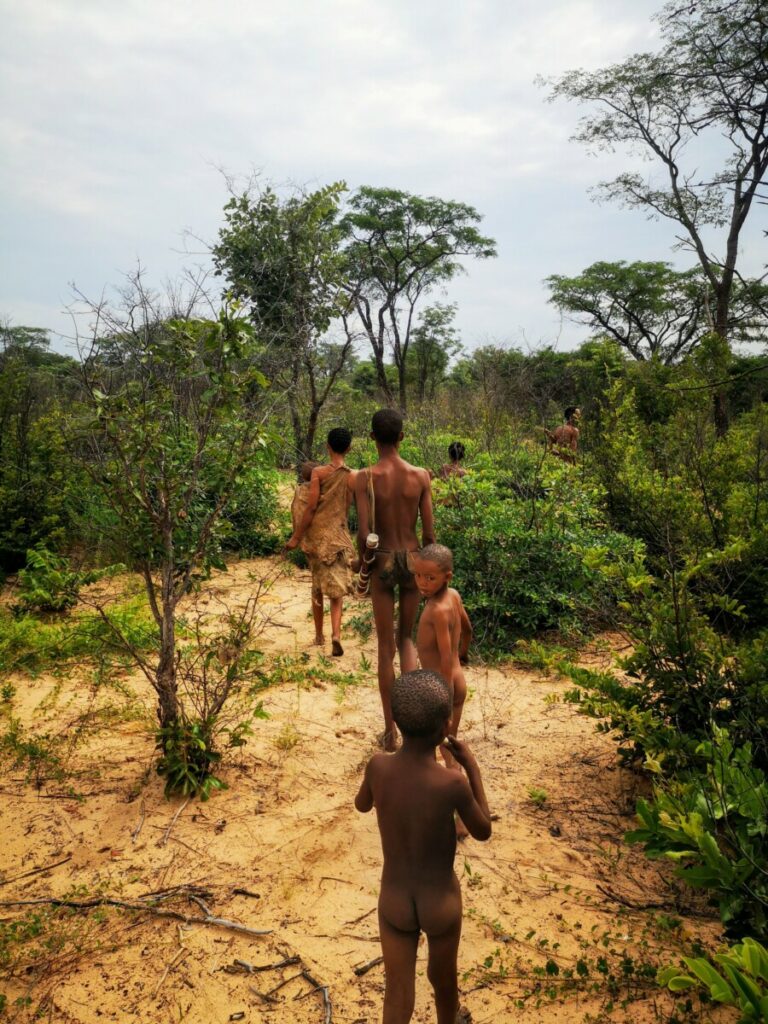 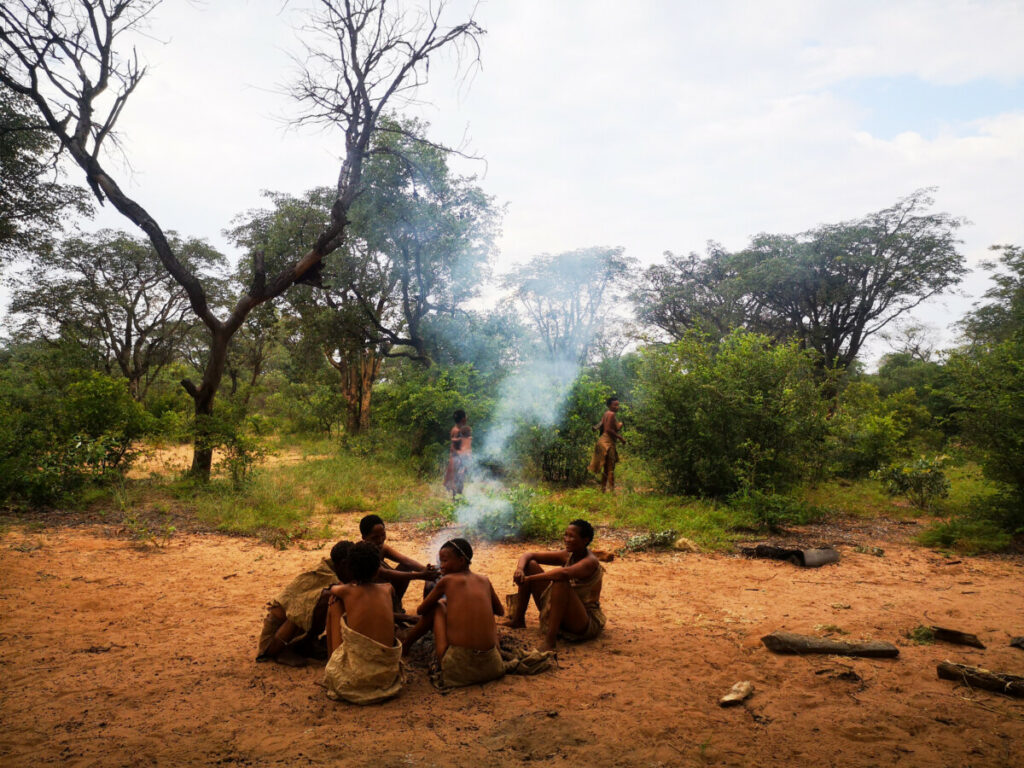 I found it very instructive and I enjoyed the fact that you have a bit more contact with the people. You see them a few days in a row and therefore have the time to ask the question that you didn’t think of the first time. I suffer from this more often, so to speak… That after a first contact, I have all new questions to go deeper into. If you stay a bit longer, you can ask them the next day or the day after.

How the San lives in the here & now

I also booked a tour of their new village. There was a school and a community building, which were good buildings. The rest were more like huts as you can see on the picture below. My guide really didn’t need a good house either. I suggested to him that I would give him stones for it…but he would not use them. He was satisfied with what he had. In the winter he kept it warm by putting sheets against it and in the summer he would take them down and the wind would pass through. He didn’t miss anything… Maybe some more meat… They were not allowed to hunt any more, you need a licence for that and it was too expensive for him, he said.

Sometimes they bought meat from the white farmer further on, a lot of them work there too so they earn some money. For the rest they gathered most of what they could find as they had been doing for hundreds of years.

Experience the Kalahari with the San – Namibia

I will write about the whole visit in a subsequent blog. When I have done so, I will of course link to it here.

Experience the Kalahari and visit the different San. I found it super informative. For that reason, I am also glad that I visited several places and countries and got to see several activities with the San.

Would you also book several trips in one trip that at first glance look the same?

Want to read more about my Namibia adventures?

What to do at Waterberg Wilderness – Waterberg NP

I hope you enjoy this world as much as I do