When I wanted to see the chimpanzee during my 2 weeks in The Gambia I had to go inland. I took the local bus and arrived in Georgetown, also called Janjanbureh – The Gambia. From the slave history perspective this is an impressive place to visit. It is situated on the Gambia River and the slaves were put on a boat along or from here to Kunta Kinteh Island, former James Island, I was told. Also this island (Kunta Kinteh island) you must visit of course if you are in The Gambia.

Georgetown or also MC Carthey Island is a former British settlement and founded in 1823. In 1995 the place got its old name Janjanbureh back but still the Gambians use the name Georgetown. When I search online for the slave history of this place I come across that the place just housed liberated slaves…

When I was there a completely different story was told. Is that exploitation of tourism or do the Gambians tell the story of lost history? And so of Janjanbureh and not Georgetown? It’s being investigated and I come across this discussion on a Gambian forum.

When you get off the bus in Georgetown and walk around, a boy or man comes to you and wants to show you around the most cruel places. He starts talking about the history of this place. Because of its strategic location, along the Gambia River it is a good starting point for the British and for slavery. Thus the name Janjanbureh was also replaced by Georgetown.

My visit to Georgetown / Janjanbureh – The Gambia

At first he takes us to a house to see what is still the only old wooden house that was inhabited by liberated slaves. The Jones family lived here and they were part of the first 200 freed slaves in the year 1832. 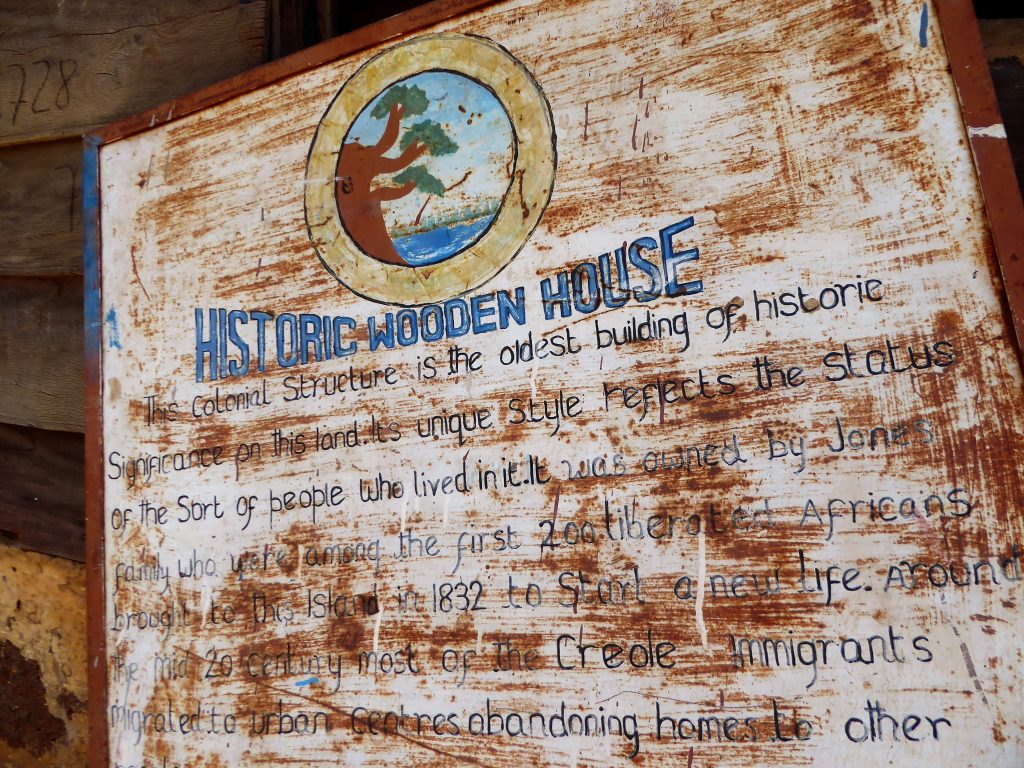 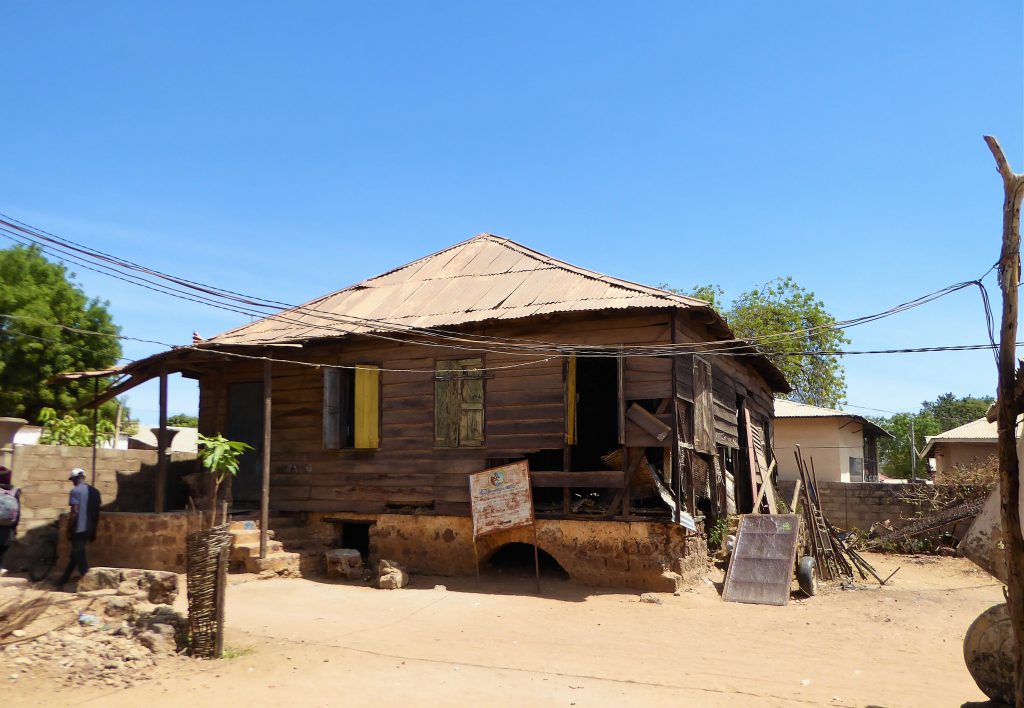 Then he takes us to an old warehouse where there are some old chains on the walls. They are so high on the wall that it is hard for me to imagine how they were used in slavery. The boy who shows us around indicates that the slaves might have been hanged. 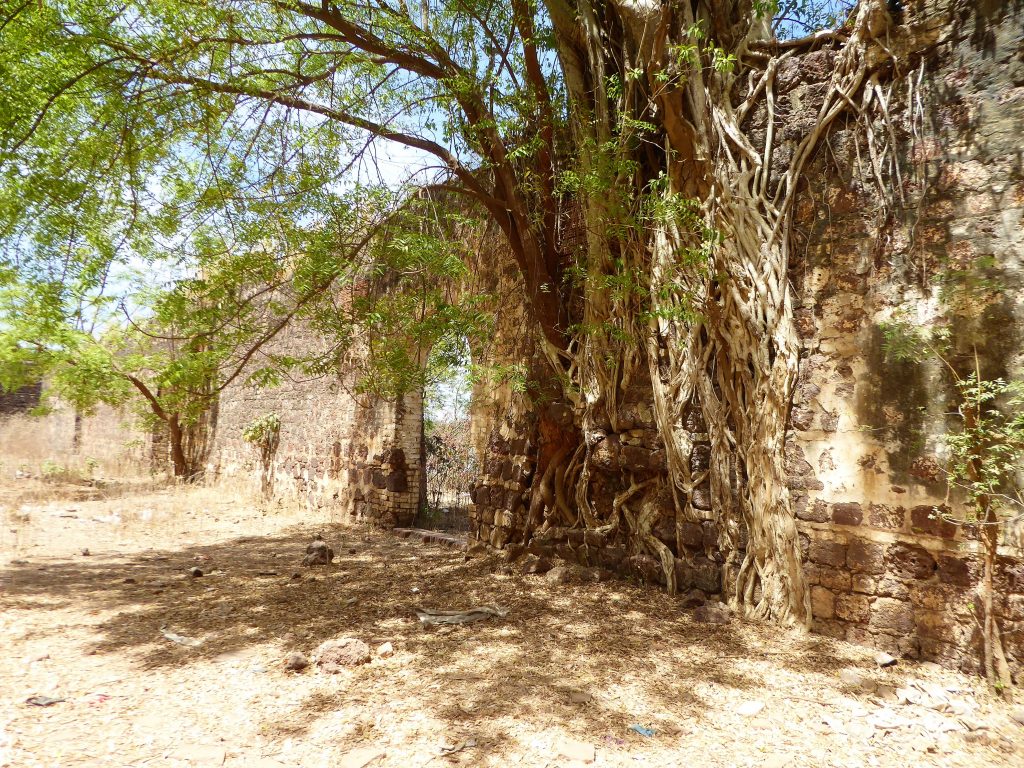 Then he takes us to the Freedom Tree… Sounds nice, but it’s not according to the boy… This tree was behind a wire net and if you ran from the river and could touch this tree you had your freedom back if it wasn’t for the fact that the British army was here so it was almost impossible to get here. Behind the wire netting there were also dogs he insured for me… 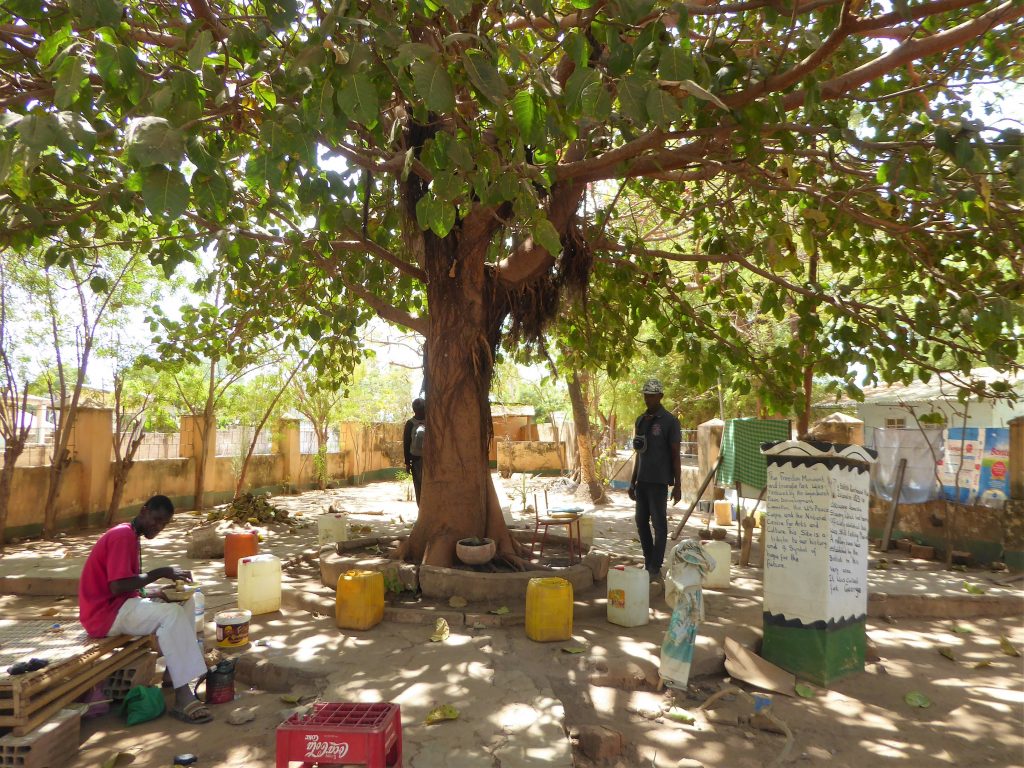 These terrible events will certainly have taken place in The Gambia and along the river but as it seems this tree is more a reminder of what was and just how it is now in the future. It is the symbol of freedom but also a tribute to the victims of slavery.  If this place was only founded in 1823 slavery would have been abolished and only liberated slaves would have been brought here to rebuild their lives… 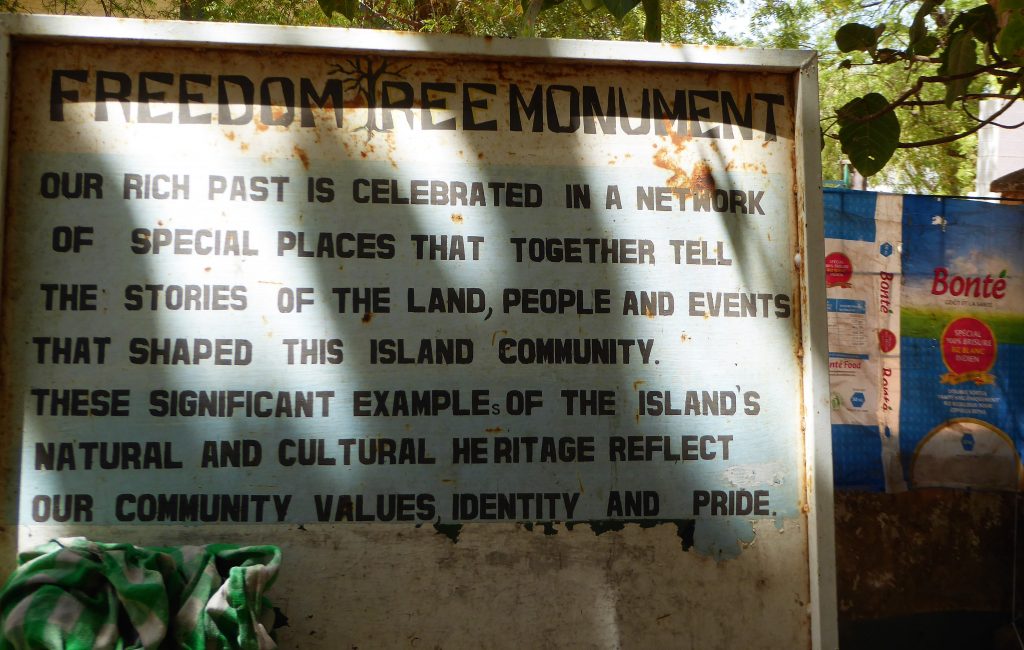 After this we walked to the building where the British leaders were. It is a large white office building with several buildings around it. In front of the building is a cannon from the old days. The whole terrain is poorly maintained and only the house on the picture was still beautiful. 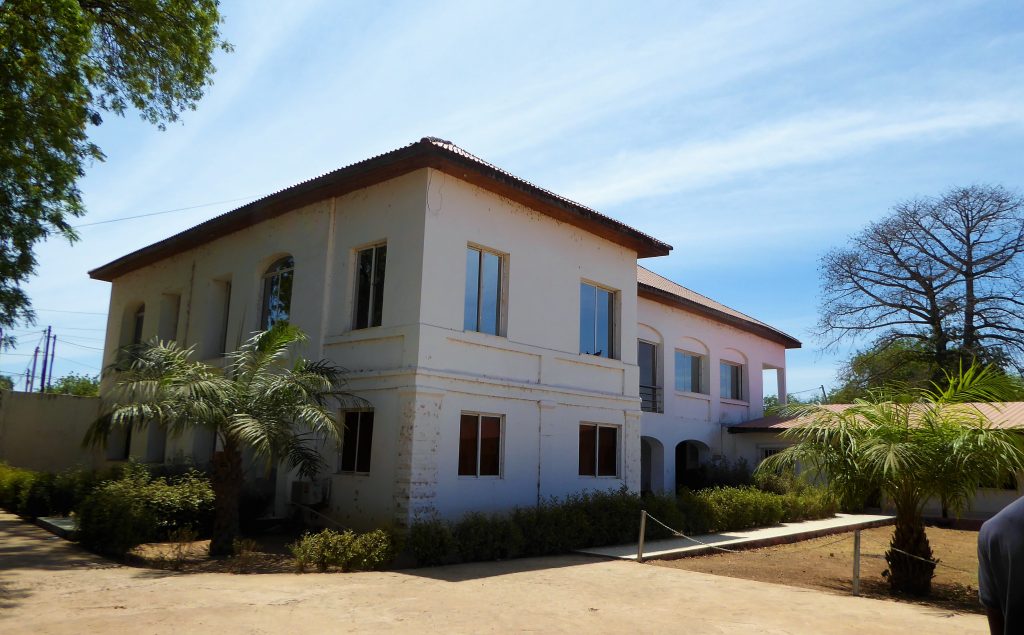 From here we walked further to the river. Near the river there is a storage house, a large warehouse which also served as a prison.

On the wall of this large warehouse we see murals that remind us of the slave past of The Gambia and actually of this part of Africa continent. 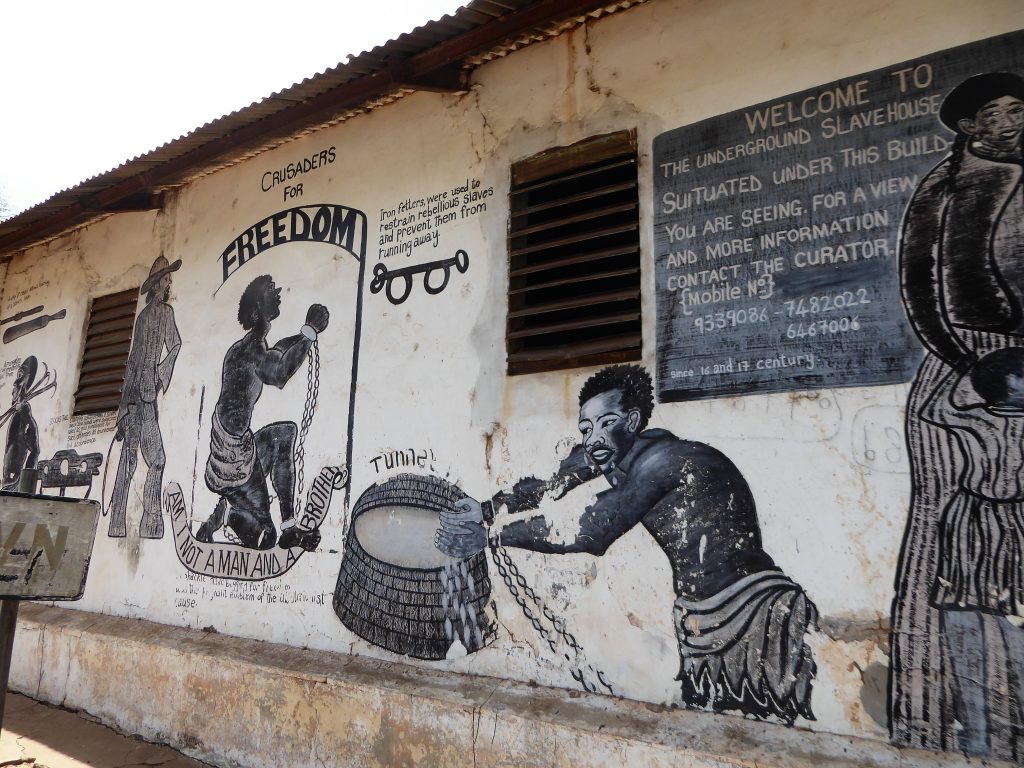 In the part below the storage was a cellar in which chains were found. I am taken to the basement and see a large room with some small spaces around it. I see handcuffs and chains in different places on the walls. It’s a low, small room and when it’s full of people here … you can’t get out to go to the toilet… That’s terrible!

It feels so bad! 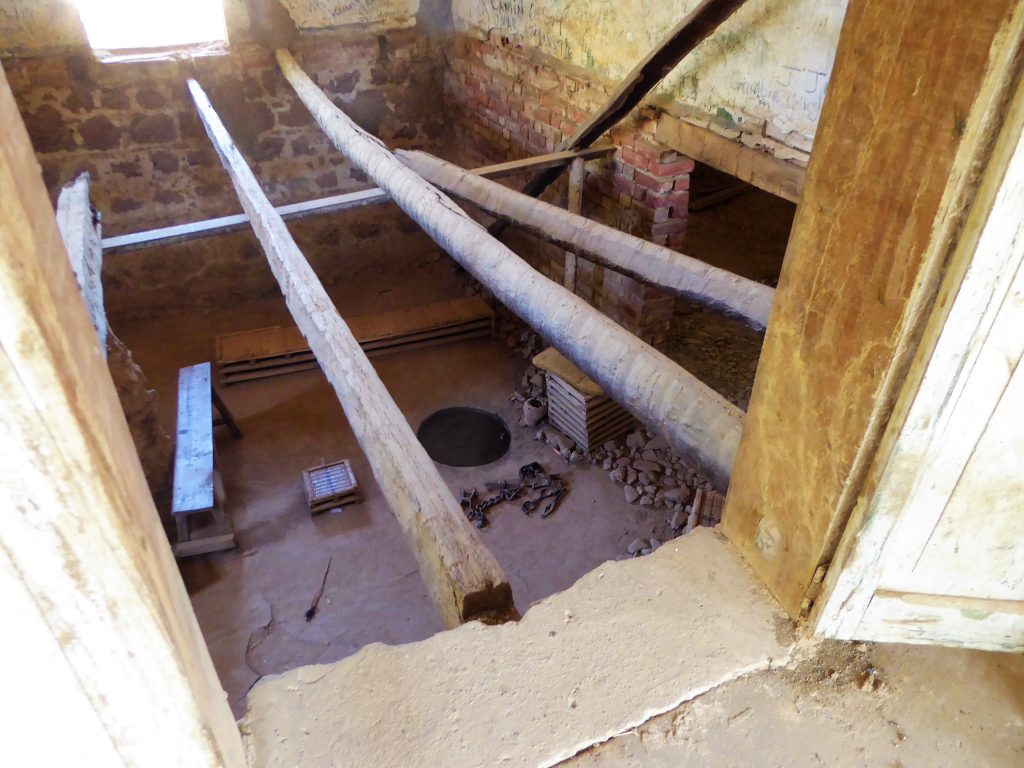 From the river I had a view of another warehouse, also from colonial times...
So you’re wondering what happened here. 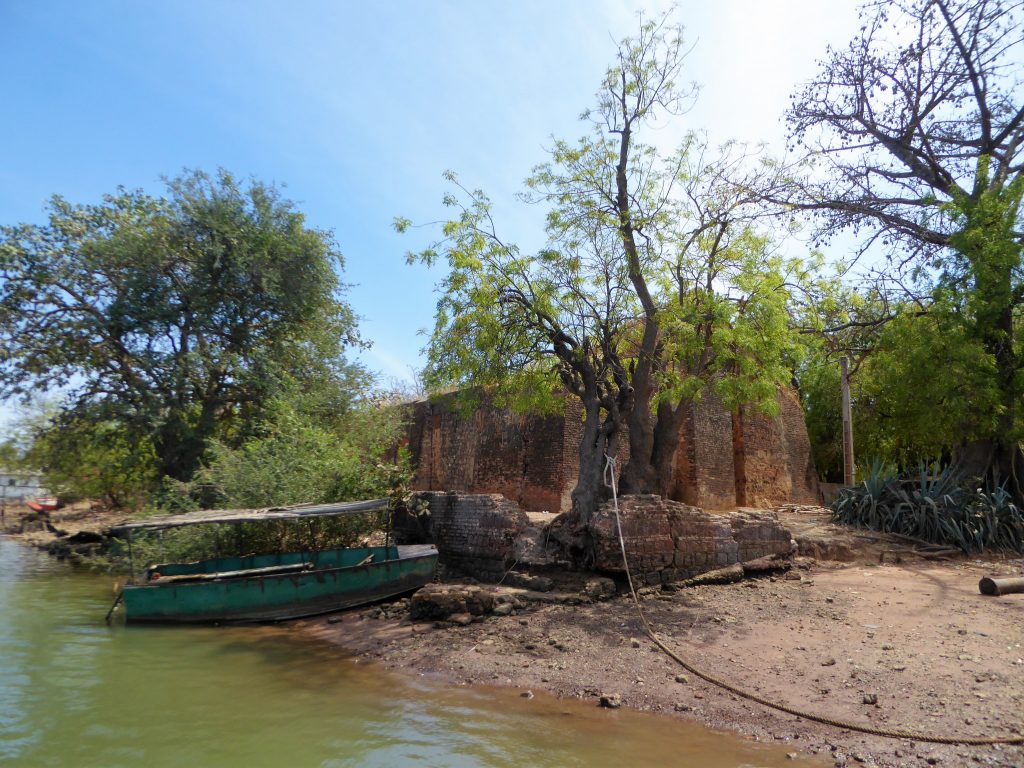 My visit to Georgetown / Janjanbureh – The Gambia

I was only in Janjanbureh – The Gambia for an afternoon and then quickly moved on to Kairoh Garden in Kuntaur from where I cycled to the stone circles of Wassu and was also allowed to see the chimpanzee on Baboon Island!

I went at the lower side of the Gambia River to Janjanbureh / Georgetown. Here you can catch the local bus that leaves from a bus station near Kotu and Kololi (the touristic area of The Gambia also called The Strip). I stayed in Bijilo (Baobab Resort) and it was about half an hour by taxi that morning.

Because the weather hadn’t been good and a lot of people had been waiting, too many people came on board of the ferry and we were stuck for a while. Because yeah… everybody is allowed on board and then we’ll see if we come over…

There are times when safety is really nowhere to be found!

But you can also go with others to the other side. There are plenty of boats going to the other side only then you’ll find yourself among all kinds of goods. This was a few days earlier when the boat did not go to the other side at all, so we knocked at someone else’s door to see if we could come along…

We weren’t the only ones as you can see… 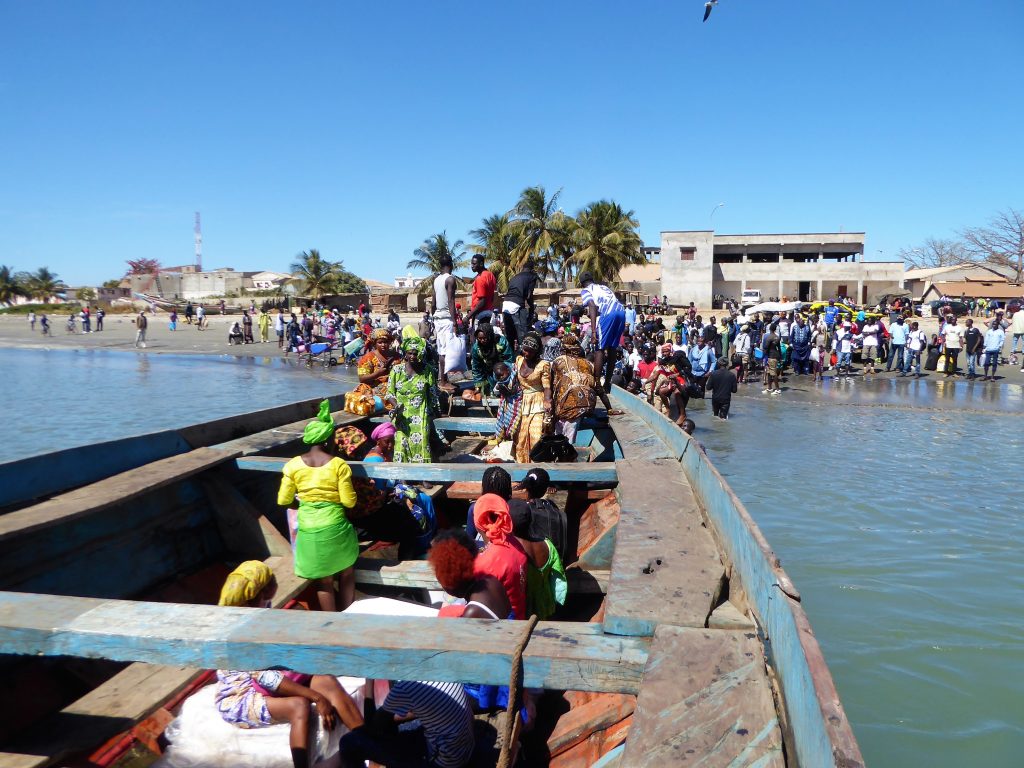 Stay near Janjanbureh – The Gambia

During my trip I stayed inland at Kairoh Garden and I really loved it!  I can really recommend that place to you! I had my own little house with an eco toilet and a hot shower. They really had a nice place there. If you want to stay a bit cheaper then they also have rooms with a shared shower.

But for around 15 euros you can rent your own house, right? 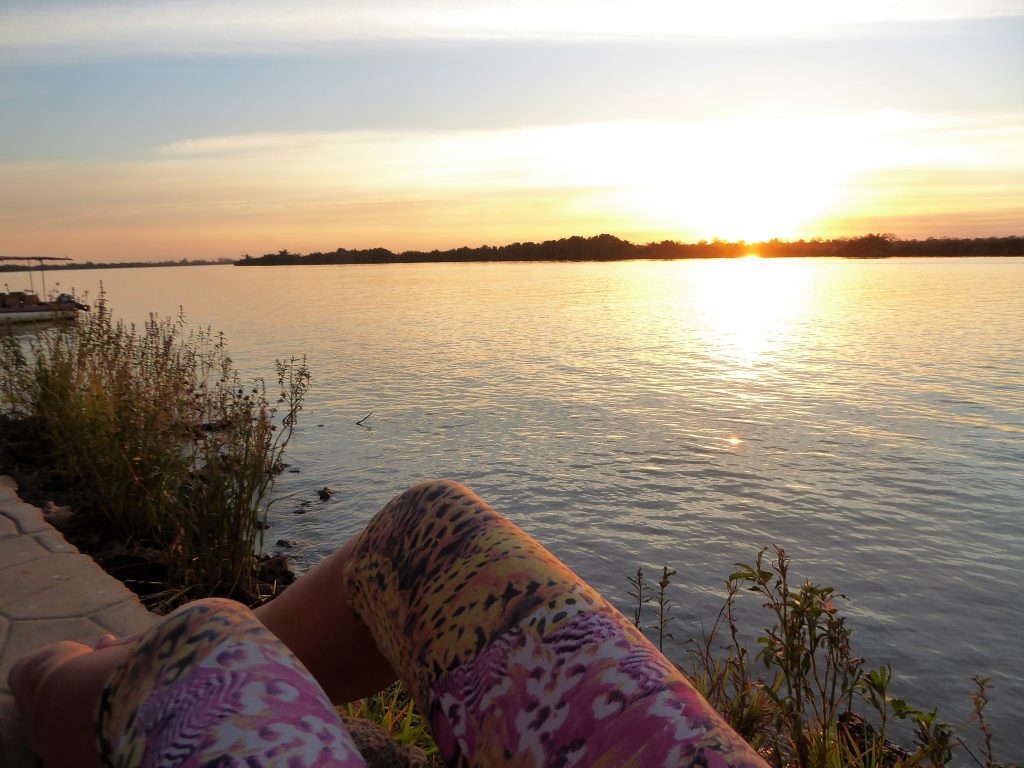 It was only a short adventure, 3 days into the inlands of The Gambia. In hindsight, I should have made it longer. With another stop somewhere along the way. The inlands has a lot to offer in terms of history as you see in Janjanbureh – The Gambia.

If you click through to my full 3 days you will see that it also lets you experience a lot in terms of nature!

When I got back to the coast I went surfing for a weekend in Kartong!

Do you find this information useful or interesting?
Then share it! 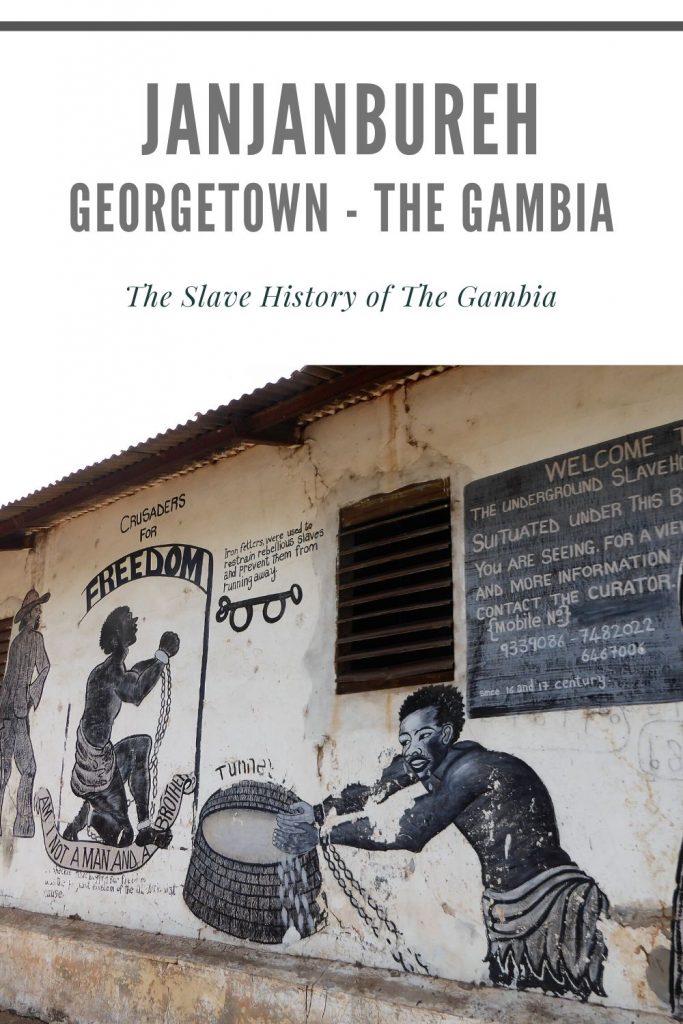 Want to read more about my trip in The Gambia?

Having dinner with the locals – Resi Rest

Cycling to the fish of Tanji – The Gambia

Why I didn’t travel solo in The Gambia

Are you looking for the Africa of the safaris? Then go to Masai Mara NP in Kenya